Schloss Eltz (Burg Eltz) is one of the most beautiful castles in Europe, located in the forest in Eifel, in the Rhineland-Palatinate near Wirscham (Germany), on a rock, washed on three sides of the river Elzbach Moselle. It is very well known in Germany and is famous for the fact that it has never been attacked or defeated like the others, so it is well preserved inside and out.

The Elz Castle was built around the 12th century between Trier and Koblenz, a few kilometers from the town of Münstermeifeld, to protect the road that runs along the river to the Mosel from the hinterland of the mighty Eifel mountain range. The foundation of the castle was an elliptical-shaped mountain with a height of 70 meters. The builders of the castle took into account the peculiarities of the natural landscape and as a result, the shapes of some rooms seem somewhat unusual.

This magnificent castle is one of the few that has never been seized, destroyed, not succumbed to fire and miraculously survived the wars of the XVII-XVIII centuries and the French Revolution, which is why it has remained so well preserved to this day, both outside and inside. For centuries the castle has been in private hands and is now open to tourists as a museum, the interior is authentic and just as it was for centuries with its original medieval furnishings. Sometimes historical films are shot there.

READ
10 tips for discovering the extraordinary face of Milan, Italy

The Castle of Elz consists of ten towers, the biggest of them – 42 meters high, they are powerful walls that surround a fairly large courtyard. The number of rooms of the castle, where members of the Eltz family lived, is enormous – more than a hundred. The oldest part of the castle is the Platelza, created in the Romanesque style. And in the XV-XVI centuries in the castle Eltz were erected Rodendorf houses, whose name comes from the wife of one of the owners of the castle. In the 19th century a mosaic depicting the Madonna was placed outside the portico. The Kempenich houses of Elz were built between 1604 and 1661. Their perfect composition and elegance verify the beautiful view of the castle courtyard. A well was dug under the large tower staircase, which served as a source of water for the entire Eltz.

The current owner of the castle, Dr. Karl Graf und Edler Herr von und zu Eltz-Kempenich genannt Faust von Stromberg) does not live in the castle and is based in Frankfurt am Main. He made the castle available to tourists, thanks to it, the castle Eltz maintained and make periodic repairs, it will allow the preservation of its next generations. Tours of the castle are held in the summer – from April to November, which lasts about 40 minutes. A regular ticket to the castle costs 8 euros, but some rooms are available for a fee.

A few interesting notes. Several trails lead to the castle, there are also trails around the castle and thanks to them you can see the castle from all sides. There is a cafe on the grounds of the castle Eltz for tourists. It is forbidden to take photos inside the castle. Since 1960, in Germany until the early 1990s, issued a banknote of 500 marks Bundesbank which was depicted Castle Eltz (Burg Eltz) .

The main sights of the cities and regions of Germany, as well as places of interest for tourists, with descriptions and photos. Location of these interesting objects and places on the map. The most popular sights are: Brandenburg Gate, Aachen Town Hall, Neuschwanstein Castle, Cologne Cathedral, Thermae Caracalla, Heide Park. The ranking is based on your visits. 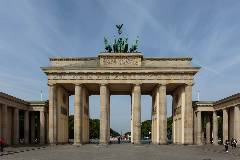 The Brandenburg Gate is an architectural monument located in Berlin’s central Mitte district at Pariserplatz. In 1688 the fortress town Berlin had several gates in the surrounding fortress wall. After the Thirty Years’ War, the city began to grow and new towns were built. 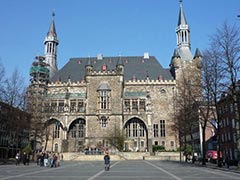 On the map Germany – Aachen Architecture and monuments

The town hall in Aachen is not just an architectural monument, but also a building that still plays a huge role in city life today. As you know, the building stands next to the no less famous Aachen Cathedral, making a magnificent architectural ensemble, which is included in lists of the most valuable . 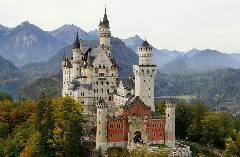 On the map Germany – Bavaria Architecture and monuments

King Ludwig II of Bavaria, a solitary and romantic, had a castle built for him on a lonely rock near the village of Schwangau (1868 – 1886). It was erected in the style of a knightly fortress and luxuriously furnished. The legendary castle Plans and drawings designed by Eduard Riedel, art. 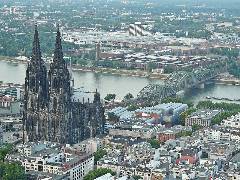 On the map Germany – Cologne Architecture and monuments

The Cologne Cathedral is located in the heart of this city, in the immediate vicinity of the main train station. The two pointed spires of the cathedral are the landmark of Cologne. The cathedral itself, which reaches a maximum height of 157 meters, is the third highest religious building. 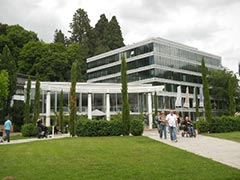 On the map Germany – Baden-Baden Spa and Sanctuary

On the site of the old baths Augustabad (bathing complex for women), opened in 1985 a thermal complex, which was named after the Roman governor Caracalla. It was on his orders that the first baths in Baden were built in the 3rd century B.C. The pools and baths are supplied with curative water from the twelve thermal baths. 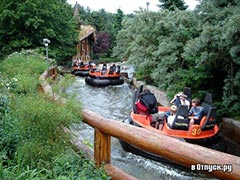 On the map Germany – Hamburg Entertainment

On the outskirts of Hamburg, in northern Germany, there is a large amusement park called Heide Park. In 2003 Heide Park celebrated its 25th anniversary. During the season the park is visited by more than 1.5 million guests. Among the 45 rides are some interesting new additions: the Big Loop – a roller coaster with four rides. 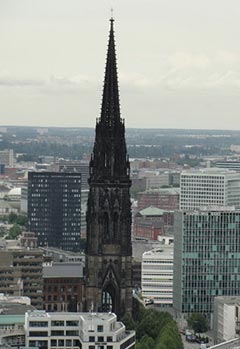 The Church of St. Nicholas in Hamburg now serves as a memorial to the horrors of war for posterity. It was completely destroyed during World War II and was never rebuilt. Only the neo-Gothic main tower remains of the entire building. Interesting. 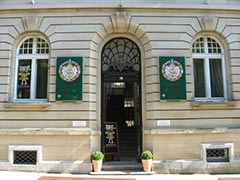 On the map of Germany – Baden-Baden Museums and exhibitions

The Carl Fabergé Museum was opened in Baden-Baden in 2009. This is the only permanent exhibition in the world, fully dedicated to the history and works of the jewelry firm Fabergé. At the end of the 18th century, Peter Carl Gustavovich Fabergé founded the family jewelry firm in St. Petersburg. 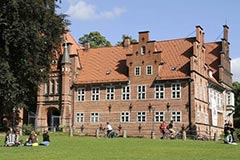 Bergedorf Castle is the only castle that survived in the city of Hamburg. This is quite an ancient sight, because its history begins in the 12th century. The castle is located in the area of the old village called Bille, on the right side of town. According to historical data, Hamburg .

On the map Germany – Bayreuth Architecture and monuments

Villa Wahnfried is located in the Bavarian city of Bayreuth. It was built in 1872-1874 and belonged to the great German composer Richard Wagner. It has now been converted into a museum. In 1871, Wagner moved to Bayreuth, where he was going to open his new theater specifically for performances. 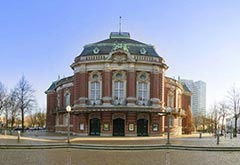 On the map Germany – Hamburg Entertainment

The music theater in Hamburg, also called the Leishalle Concert Hall, is a real treasure of the city and a big hit with tourists and visitors. Tickets sell out almost instantly, which demonstrates the great popularity of this attraction.

READ
Nice, France: What to see 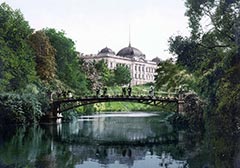 The renowned botanical garden “Plants and Flowers” is located in the center of Hamburg. Originally the Zoological Garden was located here, in the 30s of the twentieth century it was reconstructed according to a project designed by architect Karl Plomin. This was done specifically for the large-scale Biergarten. 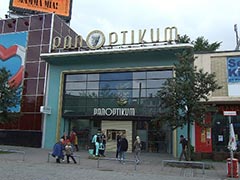 On the map Germany – Hamburg Museums and exhibitions

Museum Panopticum is one of the oldest wax museums in Germany. Its history began in Hamburg in 1879 and to this day this attraction attracts a large number of visitors, among them not only tourists but also locals. At the very beginning of its existence. 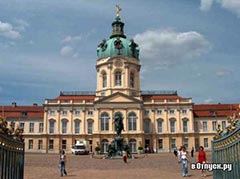 Charlottenburg Palace was built as the summer residence of Elector Friedrich III’s wife Sophie-Charlotte. Construction works began in 1695. Under Frederick the Great the palace was expanded and rebuilt. Later was built a Small palace theater and a tea house “Belvedere”. In front of the palace was installed. 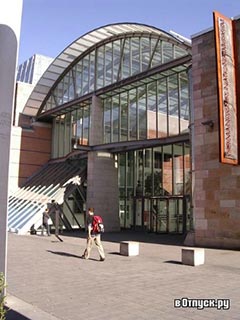 On the map Germany – Nuremberg Museums and exhibitions

German National Museum is a major museum of art and culture in Germany. This museum contains about 1.2 million exhibits, dating from 30,000 BC to the present day. Exhibits include paintings, sculptures, plastic, design objects, many historical objects, scientific. 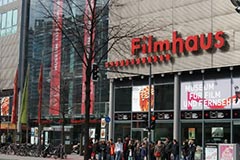 On the map Germany – Berlin Museums and exhibitions

The Berlin Film Museum first opened back in 1963, and its creator is considered to be one of the famous German filmmakers – Gerhard Lamprecht. The purpose of the museum, which was originally considered not only a cinema, but also a television museum, was to draw the attention of tourists to modern technology, allowing them to see what it is all about. 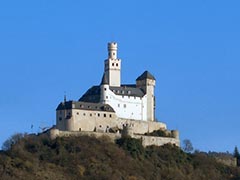 On the map Germany – Rhineland-Palatinate Architecture and monuments

Marksburg Castle is one of the castles of the Middle Rhine Valley and is located in the federal state of Rhineland-Palatinate. The castle overlooks the town of Braubach and served as an important strategic post of the Rhine valley. It is one of the few castles that have survived the many wars and preserved its original appearance. 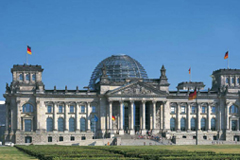 The term “Reichstag” refers to the state assembly, a collective deliberative and legislative body. The first informal assemblies at the court of the German king were recorded in 754, and from the 12th century the assembly was fixed by treaty between representatives of different classes and the Kaiser. С . 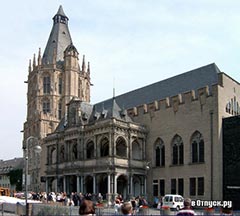 On the map Germany – Cologne Architecture and monuments

The Cologne City Hall is the city government building and is located near the Cologne Cathedral. The oldest part of the building dates back to the first half of the 14th century. Town Hall combines several architectural styles. For example, a tower 60 meters high, was made in the Gothic style, its noble design and its decoration. 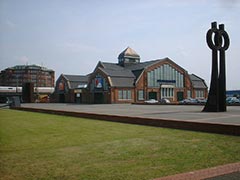 On the map Germany – Hamburg Museums and exhibitions

Museum of Modern Art Deichtorhallen is considered one of the main places that attracts special fans of art in Hamburg. In 1913, it was the site of flower vendors who sorted the goods at night so that the very early morning was ready for the beautiful ones. 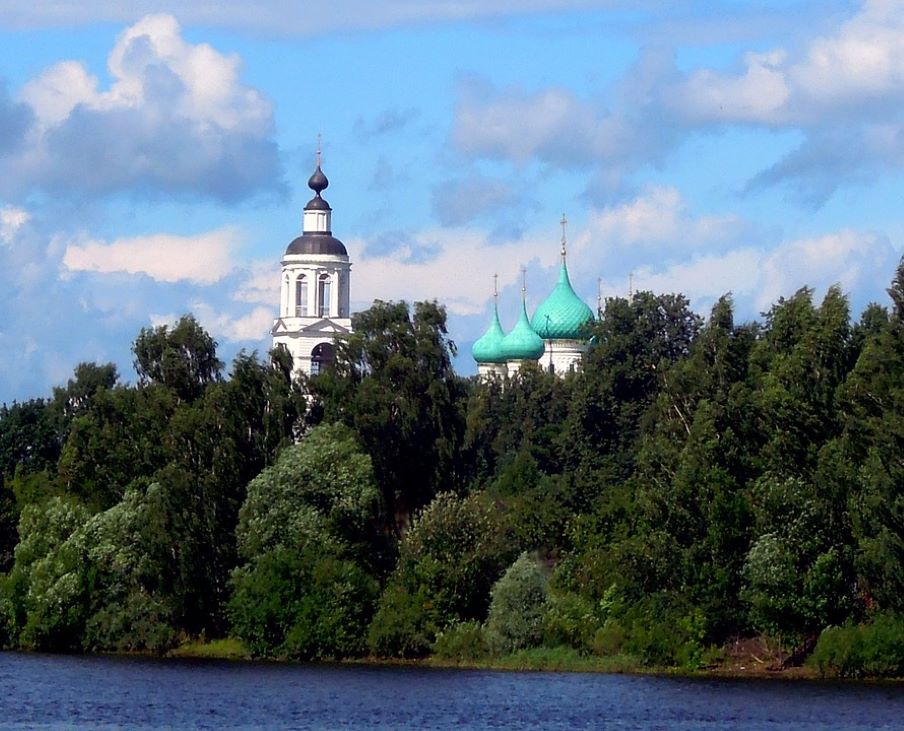 Miracles of the Tolga Monastery in Yaroslavl 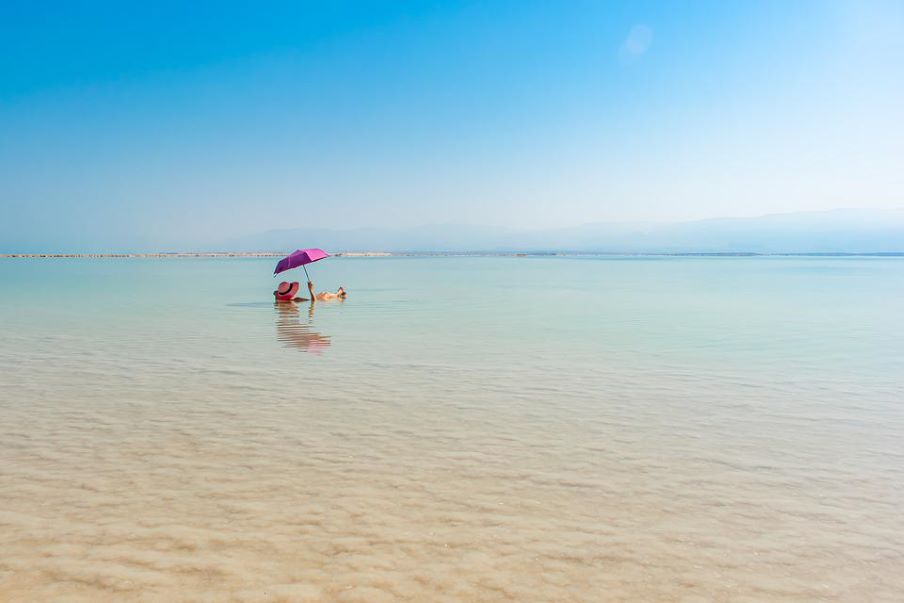 Dead Sea resorts – where to relax 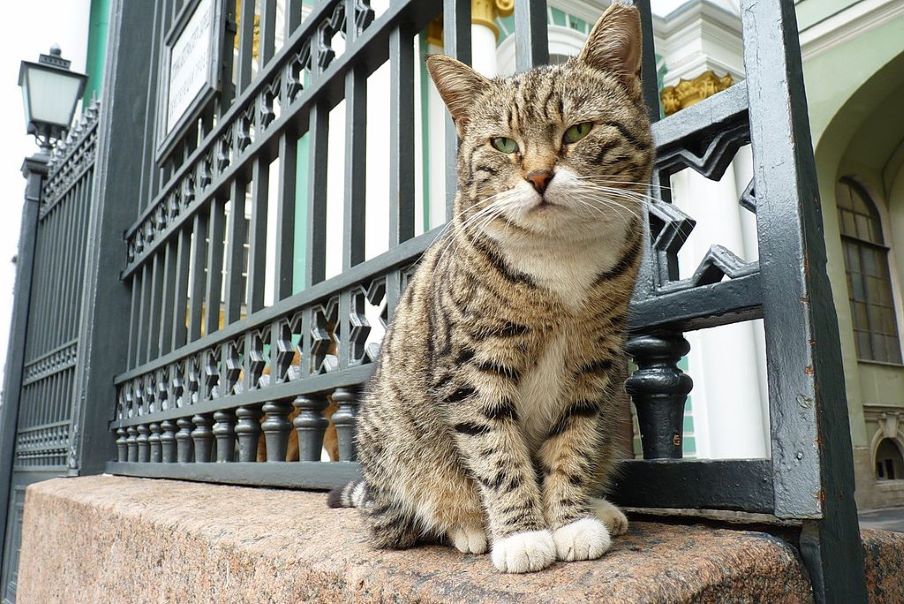 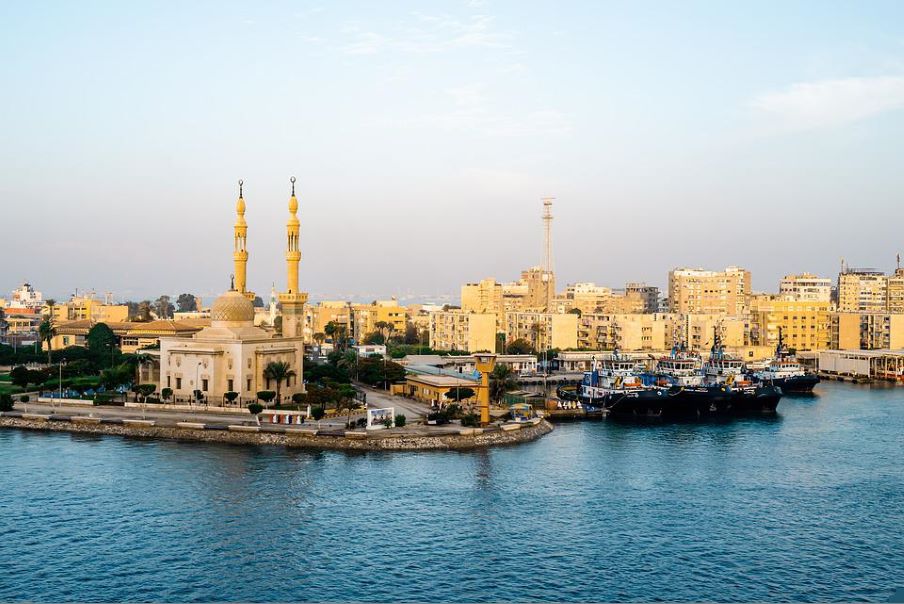 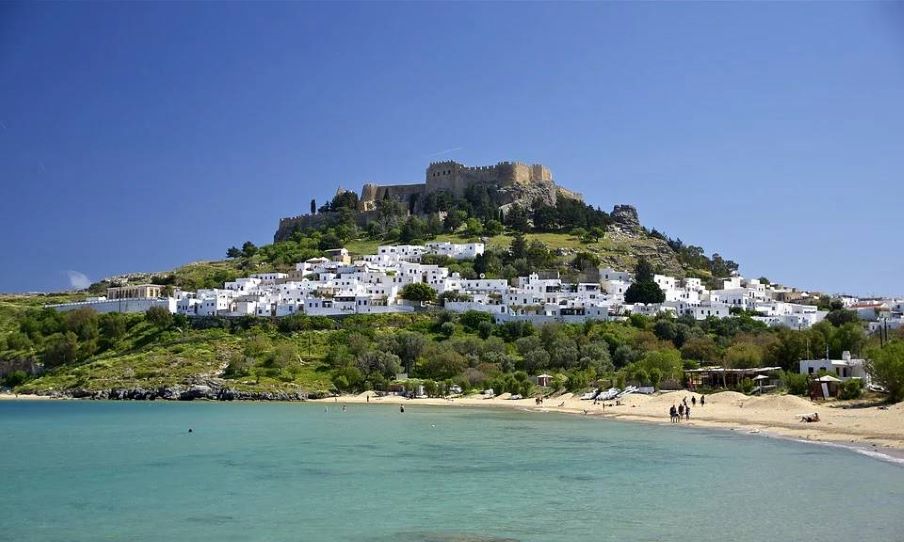 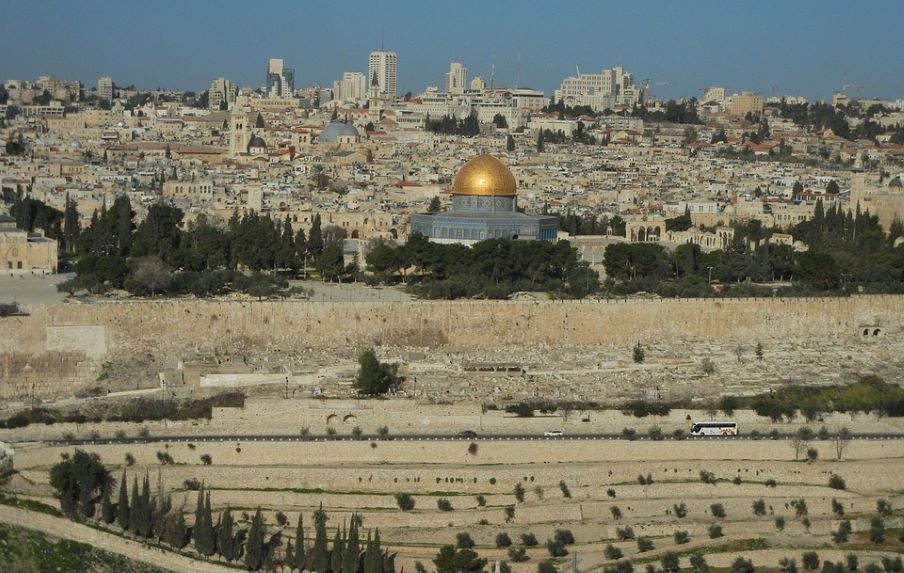 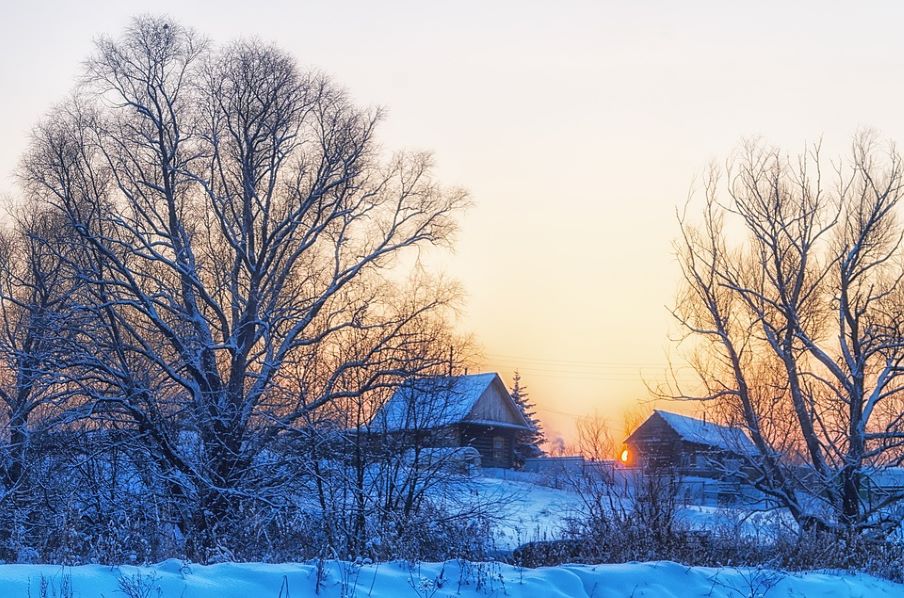 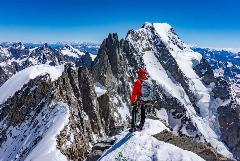