Povella – the sinister island of the plague, where they want to invite tourists 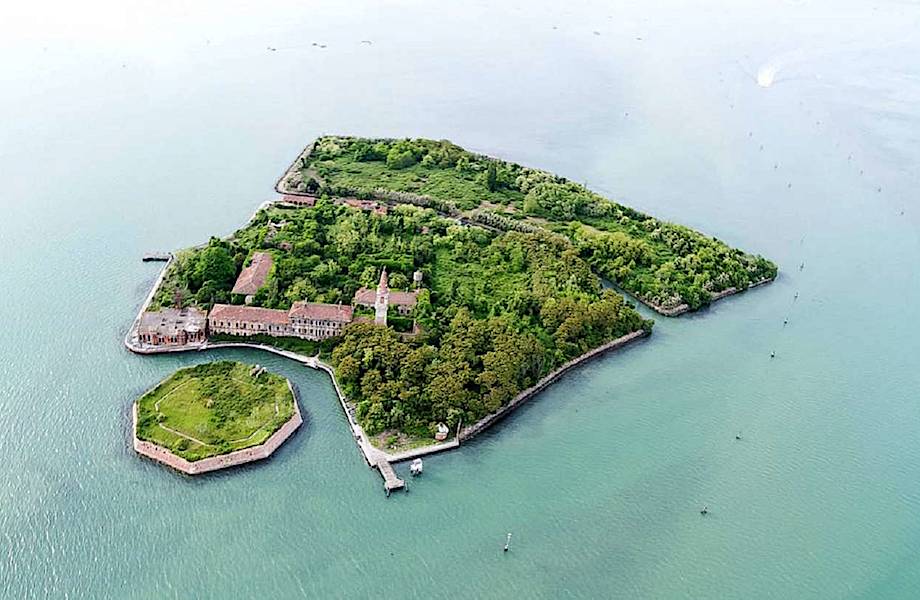 A small island between Venice and the Lido, Povella is one of the most famous and darkest in northern Italy. It is full of scary events and shrouded in the most incredible, mystical rumors. 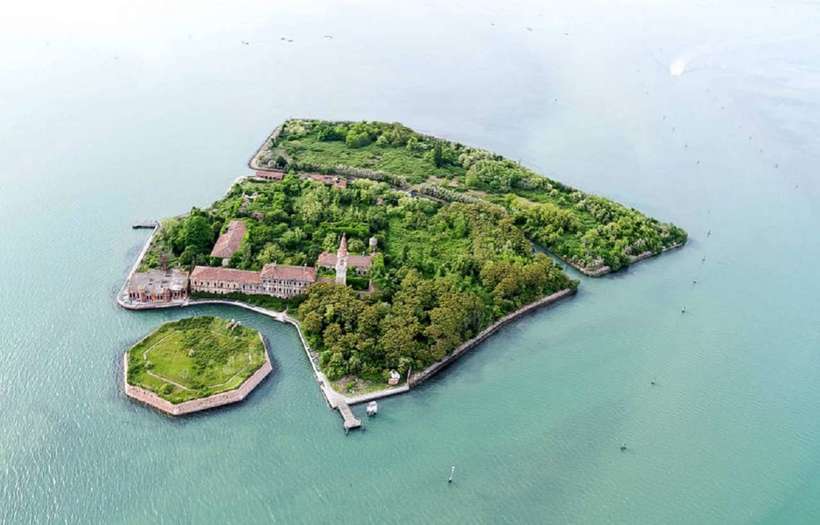 However, the mystery of the ghostly island of the Venice Lagoon is indeed eerie. It all began at the time when a ruthless “black death” walked the country, devastating settlement after settlement. At that time, Powellia became a kind of quarantine zone, where plague patients were exiled. 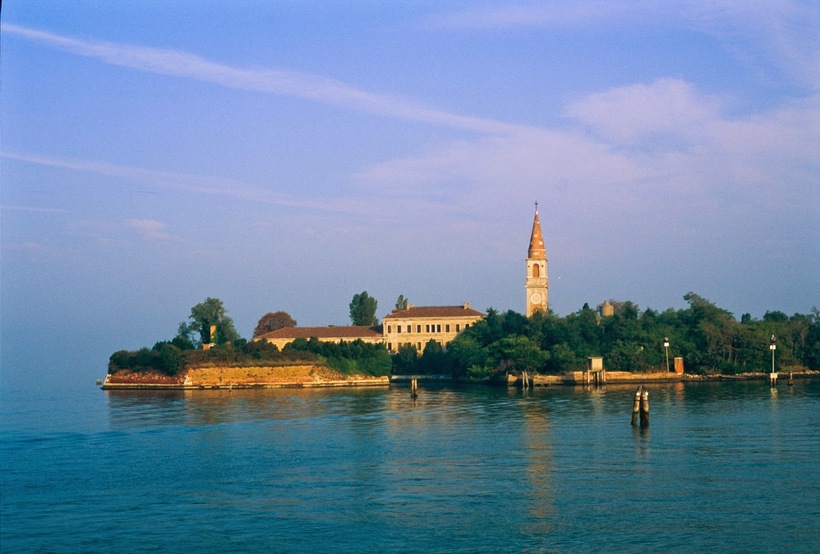 It is said that about 160,000 people were buried on the island during that period, and many souls of the dead were turned into ghosts and have remained to this day to wander the gloomy island. 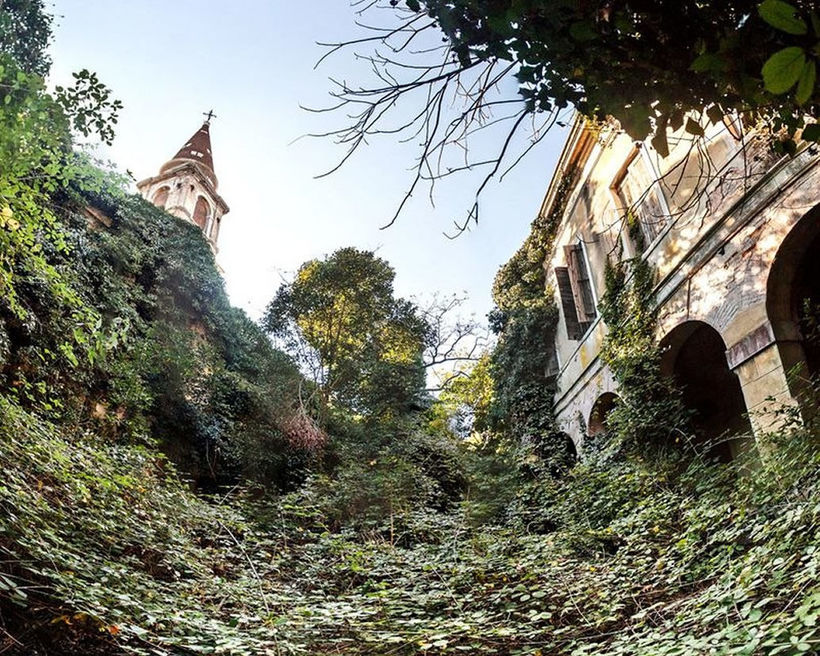 In addition, Powell’s grim reputation is reinforced by the psychiatric clinic that opened there later, in 1922. Its patients claimed to see the souls of the dead whose bodies had been mutilated by the plague, to hear whispers and strange echoes. But who would believe crazy people? 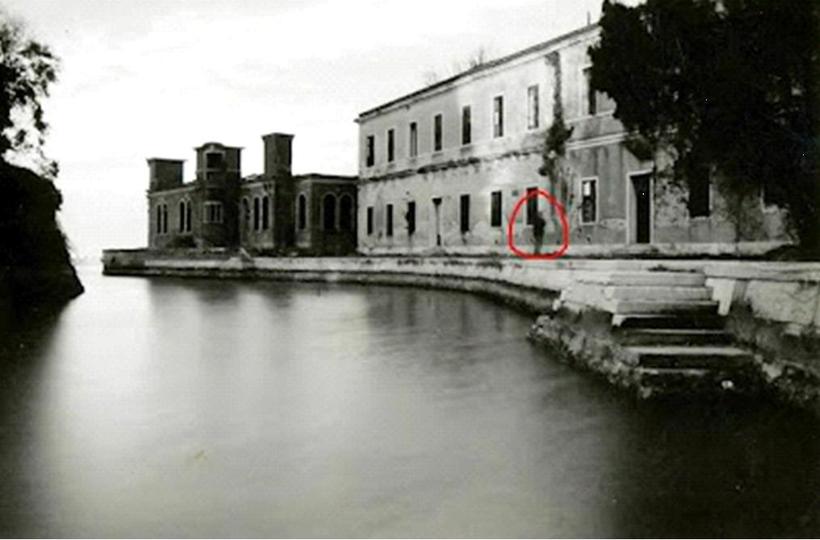 At the same time, the doctor who treated the clinic’s patients was actually conducting experiments on them, torturing and condemning them to terrible torment. But the fate of the local psychiatrist ended no less tragically than that of his charges. When they tried to arrest him, he jumped out the window of the bell tower. Since then, the island remained abandoned for about half a century, even fishermen tried to sail away from it. But in 2014, Povella attracted the attention of Italian businessman Luigi Bruniaro, who even purchased it. The Italian decided that the spooky island was a great investment, and now expects to develop it to attract tourists later. Meanwhile, the Italian island’s notoriety continues. According to researchers of paranormal phenomena, Pavella is one of the worst places on the planet. In a long time, none of the people who have been here have been able to survive on the ill-fated piece of land for more than a day. 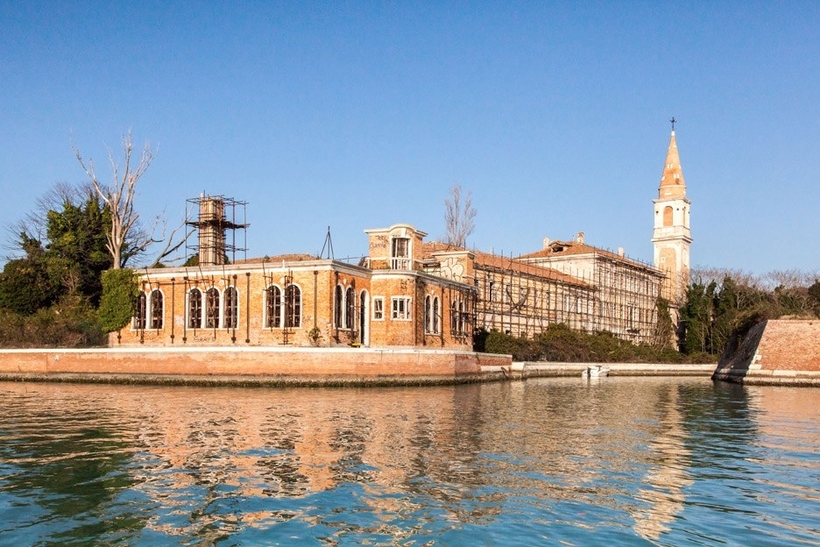 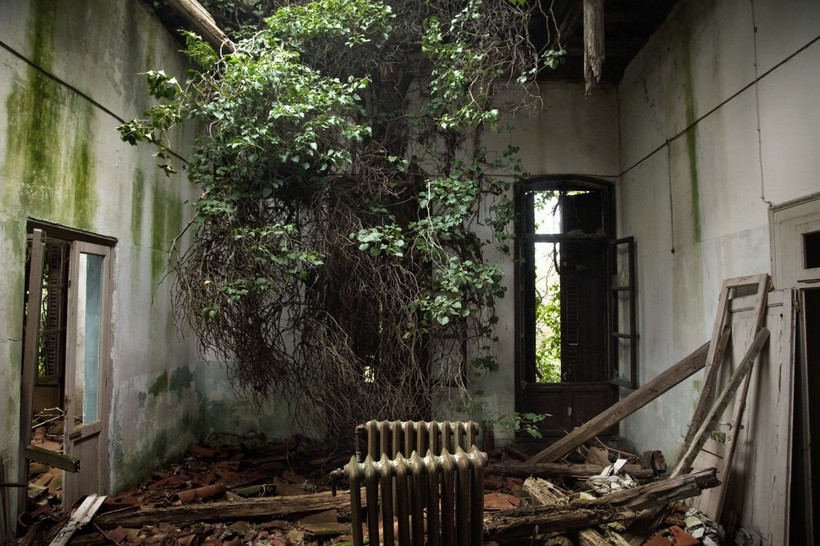 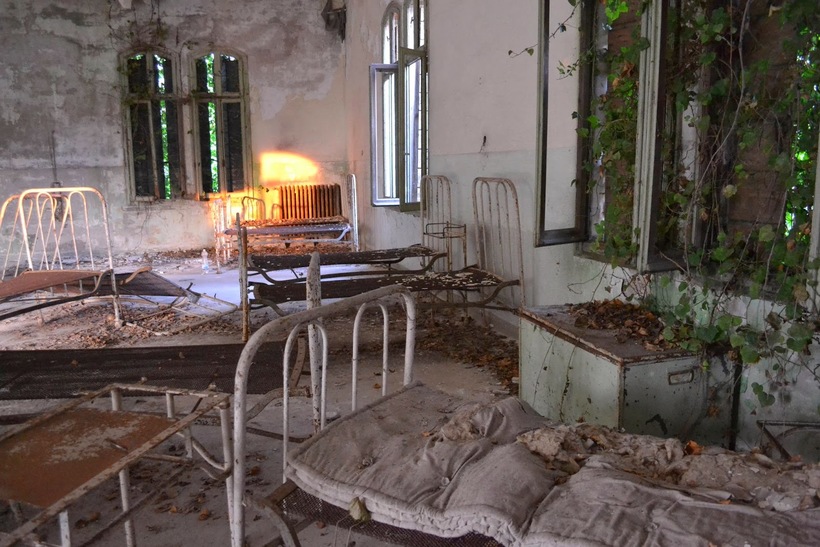 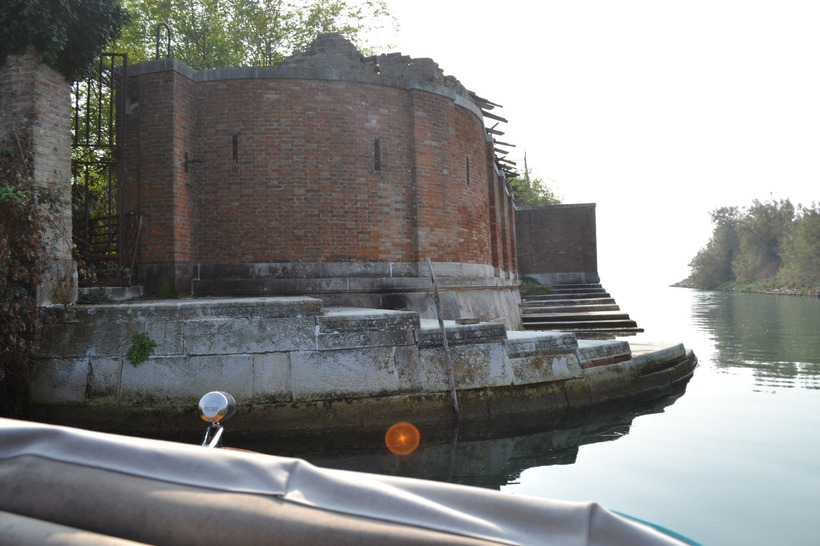 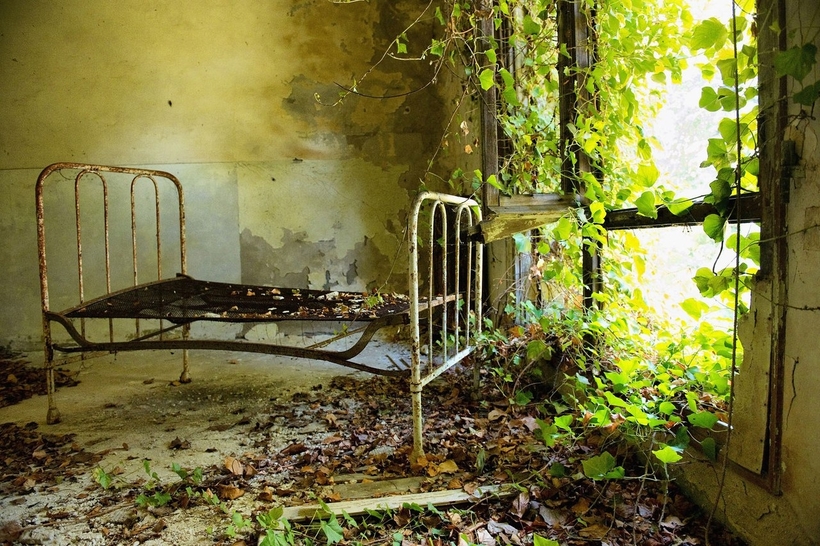 The scariest island in the world, Povella Island, is located just a few kilometers from Piazza San Marco in Venice. An island of ghosts, plagues, deaths, suicides and savage sadistic tortures. Its true history is often hidden and its myths and legends have become its reality.

History of the Island of Povelia The island of Povellia is a small island in Italy, located south of the coast of Venice along the Canal Orfano, in the lagoon area between Venice and the port of Malamocco.

In ancient times, the island was called Popilia, probably because of the poplars growing on it (from the Latin “populus” – poplar). It occupies an area of about 7.25 hectares. On its territory are about eleven buildings, now abandoned.

For centuries, the island has been a refuge, a place of exile and a dumping ground for the dying sick or the bodies of plague victims.

Its history begins in 421, when Povella sheltered its first inhabitants, men, women and children who had fled from the barbarian raids that were destroying the continental part of the Roman Empire.

For centuries this new little community lived in peace and avoided both the laws and taxes of the old continent, precisely because it actively contributed to the defense against the Frankish invasion.

The island reached its heyday when it effectively contributed, between 809 and 810, to the resistance of Metamauco, the ancient capital of the duchy of Venice besieged by the Franks. The inhabitants of Povella, in addition to being exempt from taxes, were also exempt from military service and from the duties of rowing galleys.

The island developed until the war of Chioggia, which broke out in 1379 between the two maritime republics, Genoa and Venice. Poveglia, thanks to its strategic position, was used as a military outpost, and all civilians living there were ordered to leave the island to make room for the various weapons. The characteristic octagonal shape of the island, still visible on the map today, speaks of its active military past. Since then, the island of Povella has remained almost uninhabited and has been used for other purposes.

READ
Evergreen Asturias. Escape to the mountains of Northern Spain In the 16th century, at the time of the “black death” – the plague, the island of Povella was the center of very unpleasant events.

In order to deal with the many deaths caused by the plague, the Republic of Venice transformed the island of Povella into an infirmary. The plague struck Europe hard, and Venice, in order to avoid the spread of the disease on its territory, ordered all the bodies to be taken to the island of Povella, where they were burned and buried in mass graves.

During the plague crisis, the island of Povella turned into one huge mass grave.

Later, measures concerning the bodies of those who died of the plague were extended to the infected as well. In a very short time, the island of Povella in Venice became a quarantine island where people who were still conscious, sometimes not even infected, were brought to die far away from Venice.

Men, women, and children died slowly, consumed by the disease. Witness to this tragic torment is the land of Povella itself, which, according to some reports, is 50% human ash.

The eerie history of the island of Povella makes even local fishermen stay away from it, who are afraid of finding the bones of their ancestors in their nets. Over the years, the name of the island and the deaths associated with it have become surrounded by a huge number of stories and legends. Some of them did not find their confirmation and remained myths, and some were proven, giving the island the image of a cursed place.

In 1922, a strange building was built in Powell, the function of which is still much disputed and sometimes even denied its existence. In some archives it is listed as a nursing home. However, many facts and evidence lead scholars to another version – that the building served as a clinic for the mentally ill. This hypothesis is by far the most common, as can be seen even in the ruins of the place, which unmistakably read the inscription “reparto psichiatria” – “psychiatry department”, engraved on the walls at the entrance.

READ
The most hospitable cultures in the world The asylum was closed in 1946, but the time when it operated was characterized by the most disturbing events and gruesome spectacles. The patients of the hospital were so tormented by the hapless souls of the plague victims that they insistently asked to be transferred to other centers.

However, because they were mentally ill, their complaints were never taken seriously; moreover, they served as a pretext for the sadistic torture of his patients by the head physician of the hospital. Dr. Sarles experimented in his practice with lobotomies, piercing the brain and extracting part of the frontal lobe of the patient, which, according to the then prevailing theory, should have calmed the violent lunatics.

However, the doctor himself would end badly. Tortured by spirits hovering over the island, as had happened to his patients, he went mad and committed suicide by jumping from the church bell tower. A nurse who witnessed the event said that the doctor did not die of a stroke. He suffocated from a strange mist that, coming from the bowels of the earth, enveloped his body, leaving him lifeless. It is not without the fact that the stories that have come down to this day many years later are seasoned with an aura of mystery that has surrounded the island for centuries.

There is no concrete evidence of a psychiatric hospital or a sadistic doctor in the archives, but the fact that the archives of the Veneto region pass off Povella’s madhouse as a nursing home suggests that information about the existence of a hospital for the mentally ill here must have been secret.

The closure of the hospital was the end of the island’s history. It has since become uninhabited, and the few brave souls who dare to explore it have returned, testifying of voices heard, cries and strange nocturnal phenomena.

The island received special attention from the American paranormal television series Ghost Adventures. in which there was an episode dedicated to Poveglia, the scariest island in Italy.

The Five Guys from Colorado One of the most famous stories told about the island of Povellia is that of the Colorado boys. Five American young men, all under the age of twenty, decided to have a thrilling adventure by spending the night in Povellia, inspired by a series about a ghost island in the American documentary series Ghost Adventures .

The guys arrived on the island in a water cab with guns from Ghostbusters. After saying goodbye to the cab driver, they asked him to pick them up the next morning. Shortly after midnight, sailors returning to port from the Malamocco Canal heard heart-rending cries of, “Ghosts, ghosts!”

The boat didn’t hesitate to call the fire brigade, who immediately responded and rescued the boys. Upon their return, the five friends told reporters about their close contact with the island’s ghosts, hearing voices and pained screams coming from the darkness of the night. They panicked, left their equipment in the thicket and ran to the pier, begging for rescue.

How to get to Powell Island The island, being abandoned, is officially closed to the public and it is almost impossible to get to it. You must have a special permit, which must be requested from the municipality of Venice, at least 10 months before visiting it. If you still crave for an extreme and thrill, you can enter the island illegally by arranging with a water cab driver or an acquaintance of a private boat owner. For obvious reasons, you will not find services there, so it’s not unreasonable to stock up on provisions and water.