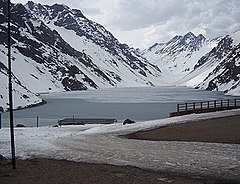 Plans for the construction of the ski resort were developed in the 1930s. Construction began in 1942 and the ski area was opened in 1949. Several of the elevators on the west side of the valley were destroyed by avalanches in 1965 and were rebuilt in time for Portillo to host the Alpine World Ski Championships in August 1966. These championships were marked by the appearance of Jean-Claude Killy, who won gold medals in alpine and combined events. Portillo has since become one of the main destinations for ski racers to train during the northern hemisphere summers and hosts the national ski teams of Austria, Italy and the United States.

Portillo is close to the border between Chile and Argentina in Paso Los Libertadores .

Portillo is Chile’s oldest ski resort and, by extension, one of the most reputable in South America. It is a 2-hour drive from Santiago and is well known among winter sports enthusiasts, who come here every year not only to ski, but also to watch international competitions held on the picturesque white-white slopes.

Portillo is located at the foot of Mount Aconcagua, in the central part of the Andes mountain system, in the area of a beautiful lake. Its main advantage is the dozens of trails of varying degrees of difficulty, suitable for experienced skiers and beginners alike.

The maximum altitude difference on the slopes of Portillo is just over 800 m and the highest skiing area is located at an altitude of about 3300 m above sea level. The longest slope is 2200 meters long. The local time is 7 hours behind Moscow time in winter and 6 hours in summer. The time zone is UTC-4 and UTC-3 in summer. The official website is www.skiportillo.cl. 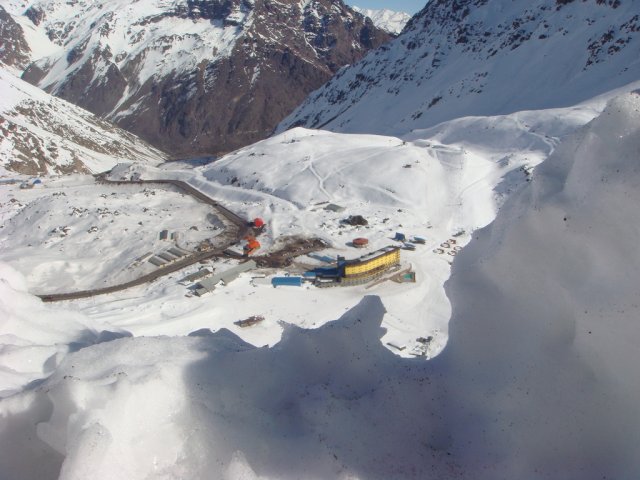 The first skiers who began to develop the local slopes, were British builders in 1910, who were building a railroad in this area. In the 1930s the first rope tow elevator appeared here, and in the middle of the century there was a hotel, which is when Portillo actually became a ski resort. In 1962 it was bought by two wealthy businessmen from North America, after which the ski center grew even larger and 4 years later hosted its first World Ski Championship. Since then its popularity has steadily increased and attendance has steadily risen. Today, Portillo is still a success and can accommodate up to 600 people at a time.

READ
The Pearls of Umbria. Perugia and Assisi.

The winter season begins at the resort in June and lasts until October. The average temperature during this time of year ranges from -2 to -10 degrees, occasionally dropping even lower. Since precipitation in the Chilean Andes falls quite abundantly, there are almost no problems with natural snow cover, and the number of sunny days is about 80% of the whole season, so skiing is rarely pleasant and comfortable. However, it is recommended to check the weather forecast for the next days before departure, as the Andes climate sometimes presents real surprises.

The distance between Santiago and Portillo is more than 160 kilometers and can be covered by bus in about 2 hours. It is also possible to take a cab or rent a car in case you intend to travel independently in the region.

Among the experts of skiing is particularly popular steep slope of the Rock de Jack, which allows you to get a good dose of adrenaline. For beginners there are numerous routes on gentle slopes. The pride of Portillo is the local ski school, which has a reputation as one of the best in the world. Over the years, four Olympic champions have worked in its management team.

Besides pistes for skiing, the slopes here have areas for snowboarding, heliboarding, bordercross, cross-country skiing and other winter disciplines. As in other similar centers of international level, there are special snow plants to control the thickness of the snow cover, equipment rentals, discounts on ski passes, and the areas are connected to each other with modern ski elevators. The hotel complex includes only one, but very capacious hotel, with all the facilities and staff for almost fifty people.

READ
6 most popular countries for tourism

Culinary diversity of the hotel complex can impress even the most sophisticated gourmets. Fish and meat dishes, vegetable salads, exotic fruits, drinks and desserts form the menu of the main hotel restaurant. In addition, for particularly fastidious guests, dishes are prepared to order.

Portillo’s stores and stalls display a wide variety of souvenirs and merchandise, from sports equipment and leather goods, to clothing and jewelry.

The important advantages of this resort are its small population and the abundance of uncluttered space that allows tourists to ski in absolute comfort, without feeling the intrusive breath of the neighbors on the piste. Staying on the slopes of Portillo can deliver a lot of positive emotions and contribute to a healthy appreciation of skiing vacation the Chilean way. 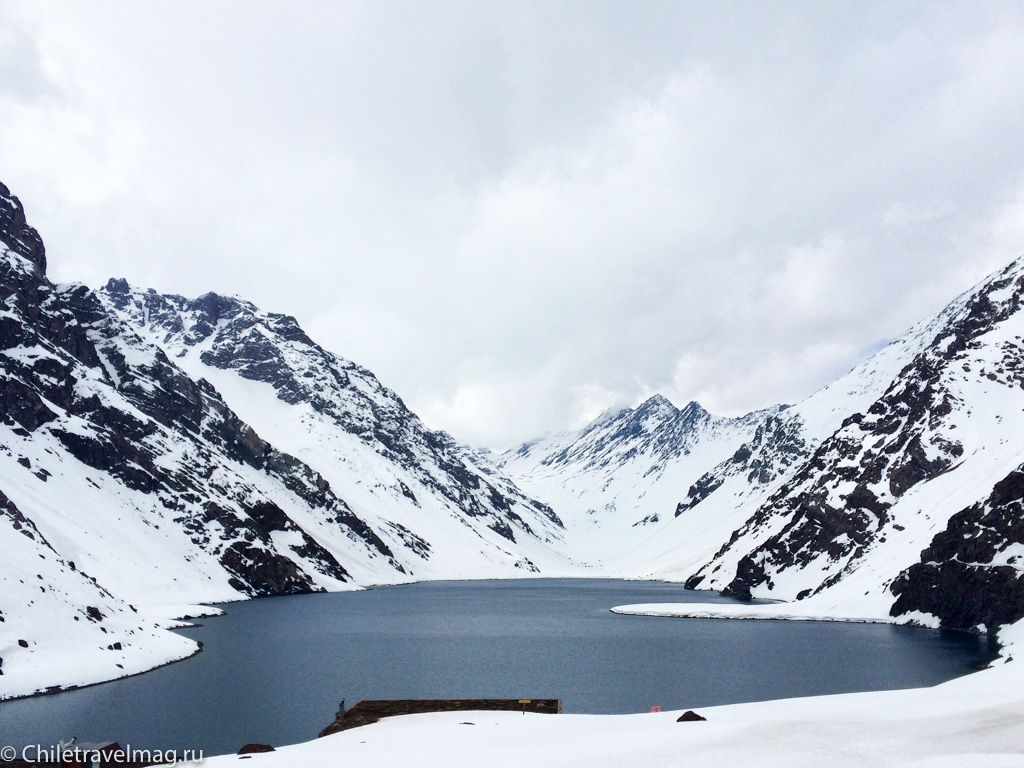 Ski Portillo ski resort can safely be called one of the most beautiful in Chile. Ski Portillo is located at the foot of the famous Aconcagua mountain (Aconcagua 6961 m) on the border with Argentina and is 160 km far from Chilean capital Santiago. In comparison La Parva ski resort is only 50 km away from Santiago.

Like all ski resorts, Portillo exists according to the laws of seasonality – it comes alive in winter from June to September, and freezes for all the other months of the year, welcoming them behind boarded-up doors. I’ve always loved coming to popular places in the off-season, when they look a little abandoned and sad. But all the beauty is yours alone.

Just before and after the season, when there is still/already little snow, Portillo has its advantages, even if they don’t apply to the joys of winter sports like skiing, snowboarding and heliskiing. What makes Ski Portillo ski resort so visually special in the low season is the blue lagoon of Inka, spilling out among the mountains in front of the main building. Around September, the lagoon shows up again in all its beauty, but still surrounded by snow-capped mountains. What a wonderful sight!

I came to Ski Portillo in October, since I spent almost the entire Chilean winter and I wanted to catch snow and throw snowballs. Portillo turned out to be the only ski resort in the closest radius to Santiago that still had snow in central Chile, and that seemed like a good enough reason for a 160 km trip. The road to Portillo is international, so at times it is hampered by large trucks running between Chile, Argentina, and Brazil, and sometimes you have to obediently weave behind the trucks.

By the way, on the territory of Portillo itself in a month like October, you have to be careful – because of the underthaw you can fall unnoticed into a deep hole, so warning signs were posted everywhere, and resort workers did not let close to the lagoon. 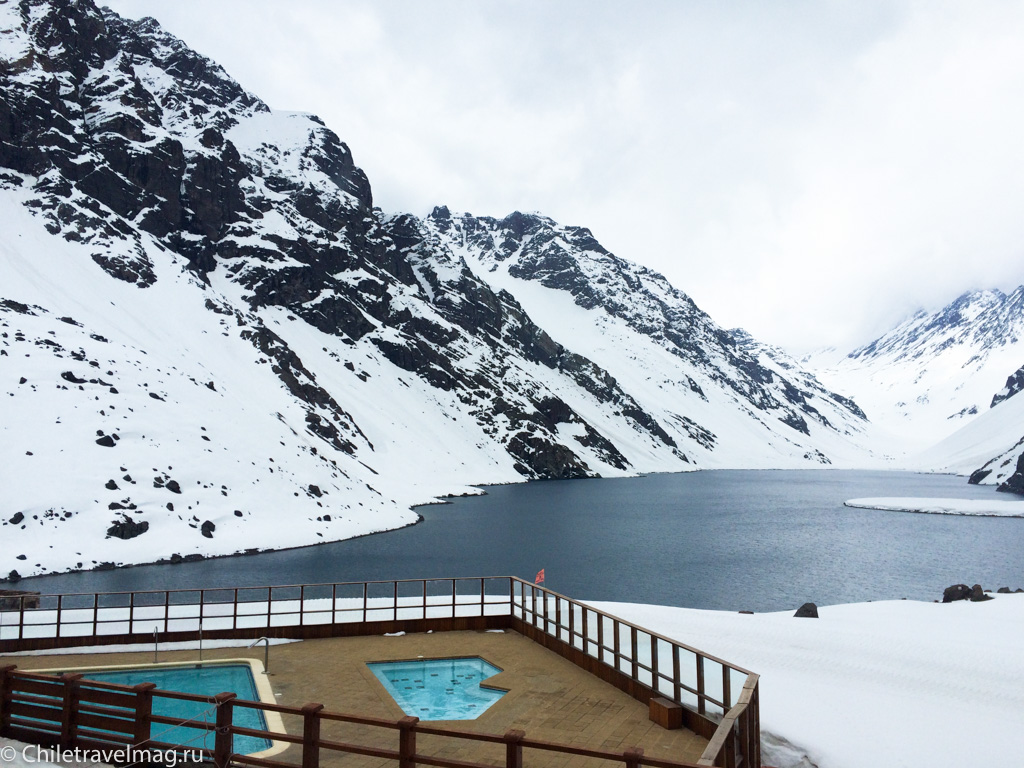 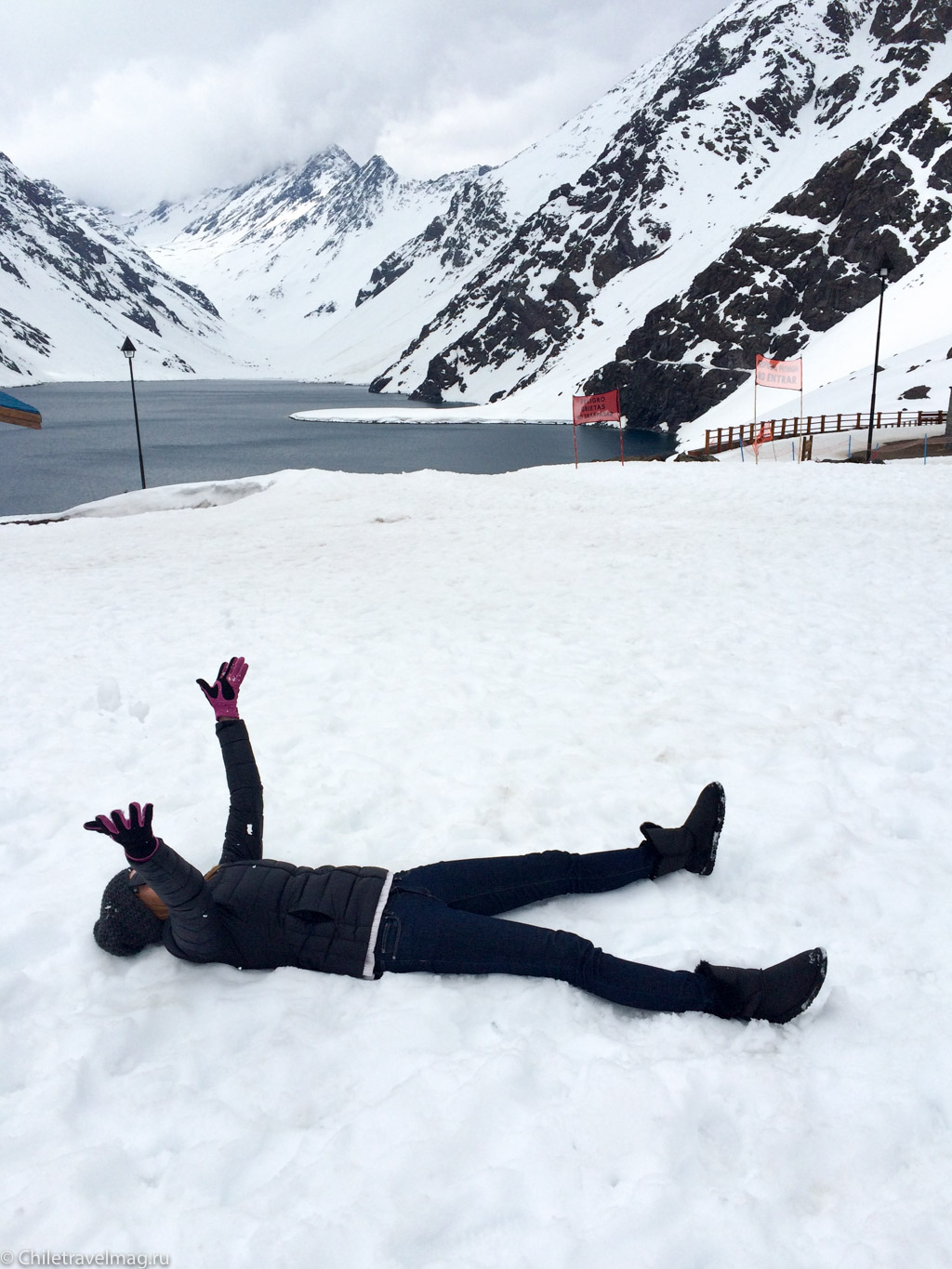 One of the chalets 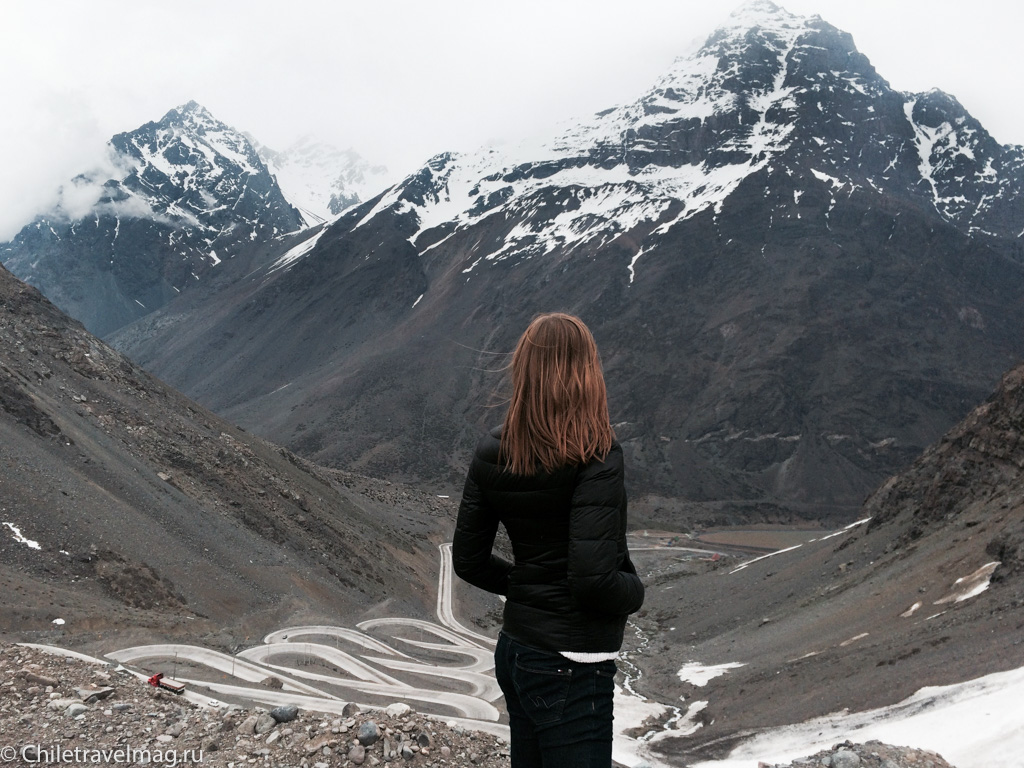 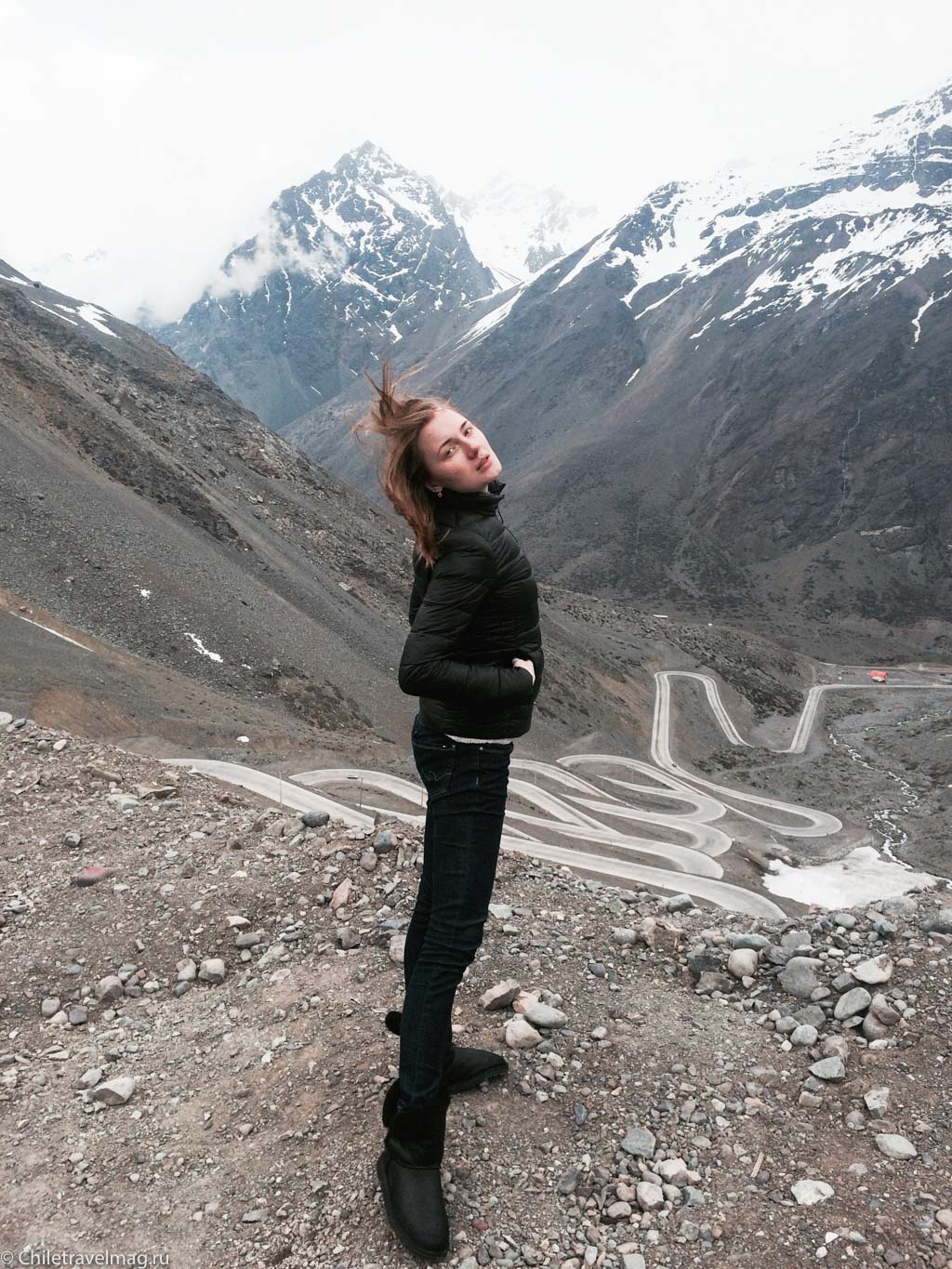 And this is what Ski Portillo looks like in high season 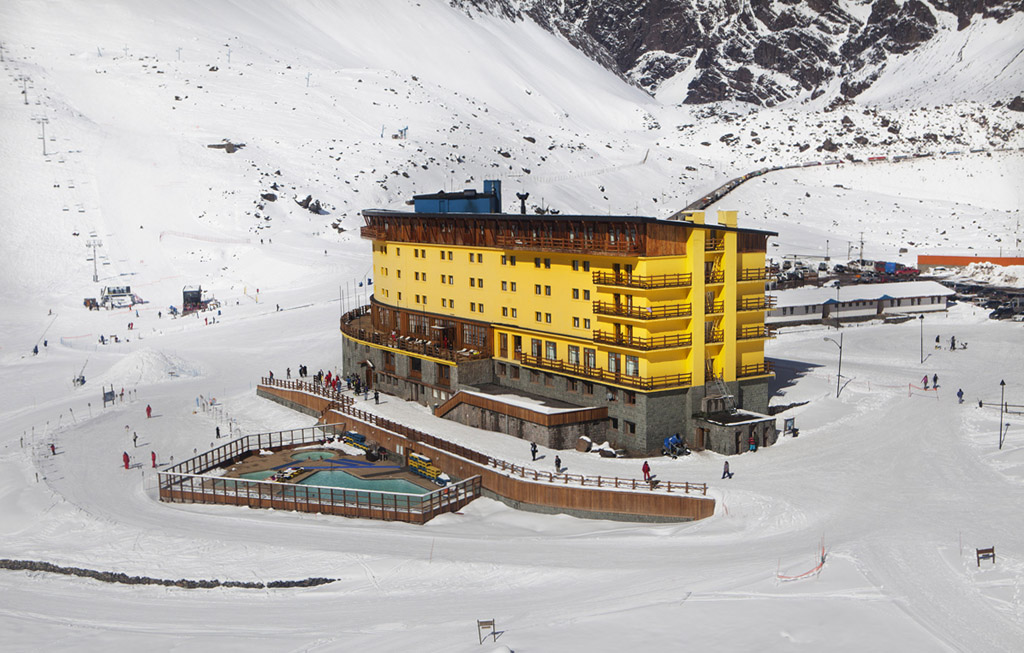 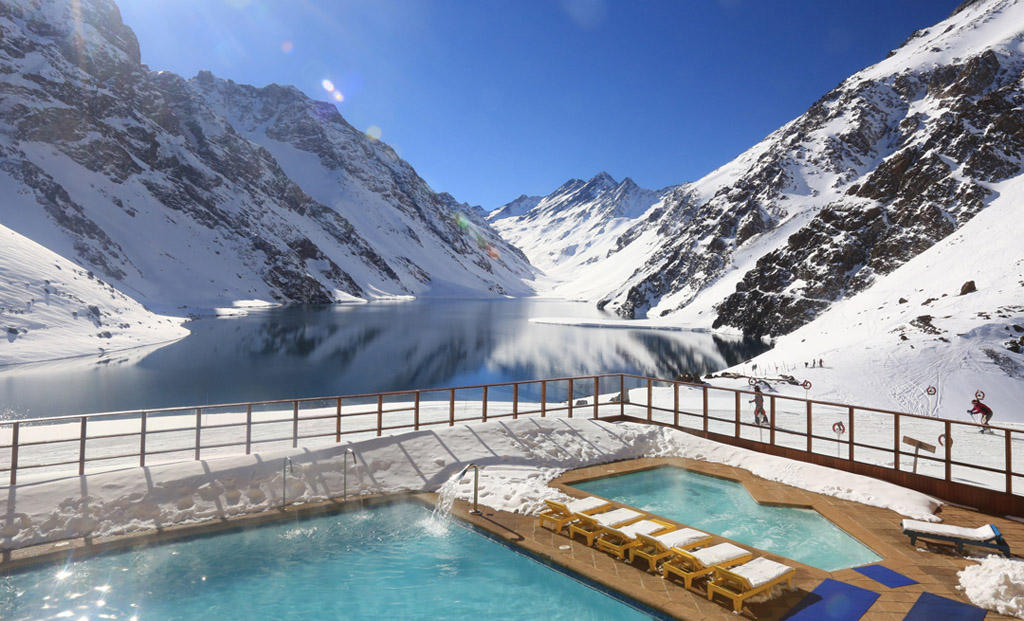 Portillo has equipment rentals, but no clothing rentals. The bulk of the rentals of everything you need for skiing are located on Las Condes, on the way to the Camino a Farellones mountain road (further down this road are the ski resorts of La Parva, Valle Nevado).