Public festivities, military parades, executions and announcements of heirs to the throne once brought crowds of Madrid’s inhabitants to the Plaza Mayor. Today the main arena-place of the Spanish capital is no less crowded – there are celebrations, restaurants and cafes, street artists paint portraits of passers-by, and shopkeepers lure tourists with souvenirs. Originally a bullfighting venue and market, Plaza Mayor has become one of Madrid’s main attractions, which you can’t afford to ignore.

From the market to the main square

Royal, majestic, popular – the epithets of Madrid’s central square are unavoidable. Lope de Vega said of it: “The belly of Spain”. But the first enthusiastic exclamations arena deserved only in the 18-19 century, before the Plaza Mayor was not famous for the architectural delights. In the 16th century the square was called Arrabal, which means “suburb” – it was located behind the city walls and served as a place of trade. The market was extensively rebuilt under Philip III. After the renovation, however, the Plaza Mayor acquired no outstanding features – the facades of the houses surrounding it were unadorned and looked rather drab. Only one building stood out against the dreary buildings – the Casa de Panadería, commonly known as the Bakery. At various times the main “stage” of Madrid has hosted Inquisition trials and bullfights, knightly tournaments and dueling nobles, religious processions and poetry contests.

Most of the buildings surrounding the Plaza Mayor were built of wood and therefore became easy prey to fire. The first fire here occurred in 1631, the next in 1672. The elements literally swept away the houses, and it took many years to rebuild them. History has preserved an amusing case: preparing to meet a foreign guest, Madrid artists covered the facades of the burned buildings with canvases depicting them. In the 18th century, the architect Juan de Villanueva took up the restoration of the square. He replaced the wooden buildings with stone ones and connected all the buildings on the perimeter of the Plaza Mayor, making arched passages between them. The work lasted more than 60 years – only in the second half of the 19th century were the consequences of the fires finally eliminated. Today the arena looks just as Villanueva envisioned: a spacious quadrangular courtyard is surrounded by uniformly styled buildings and nine arched gateways. It is noteworthy that each house (and there are 136 of them) has a balcony from which you can view everything that happens on the square. In 1985, there was an important event for Madrid – Plaza Mayor was included in the list of World Heritage Sites of UNESCO.

At the very heart of the Plaza Mayor, on a high pedestal stands a statue of King Philip II, cast in bronze. Sitting on a horse, the governor is proudly looking into the distance. The monument was created in 1616, and was installed on the arena only in 1848. In the turbulent times, marked by the proclamation of the Second Republic, the statue suffered at the hands of vandals, but it soon got back to its usual appearance.

The most notable building of the Plaza Mayor remains the Casa de Panadería. The house was built at the end of the 15th century and housed one of the three bakeries that supplied freshly baked goods to the royal court. The structure resembled a palace in style. During executions, bullfights and public festivities the ground floor was occupied by the king himself and the upper floor by his entourage. Later the bakery housed the Academy of Noble Arts, and then the Academy of History. Since the end of the 19th century it has been home to the municipal archives. Opposite the Casa de Panadería is another noteworthy structure, the Butcher’s Shop. On the days of celebrations, the balconies of this building were no less in demand boxes, over which there were quarrels, often ending in bloody duels.

All names of the central square

Because of the unstable political situation the name of the arena changed repeatedly – from “Suburban” to “Main”. Several times it was called “Plaza de la Constitución” and several times “Plaza Royal”. The name Plaza Mayor only became firmly established in 1940 and has remained unchanged ever since.

What to visit while walking around Plaza Mayor

In addition to interesting architectural and historical monuments, Madrid’s main square has:

READ
What to see in the Galleria dell'Accademia di Venezia, Italy

If you happen to catch a local party in the Spanish capital, there are festivals and concerts to celebrate the events on the square. Plaza Mayor is easily accessible – it is located within walking distance from the Puerta del Sol Metro station. Another option is to take the Opera Station and follow the scenic backstreets to the main street. Or take a bus to the square and get there on Calle Mayor.

Plaza Mayor, or small town in the center of Madrid 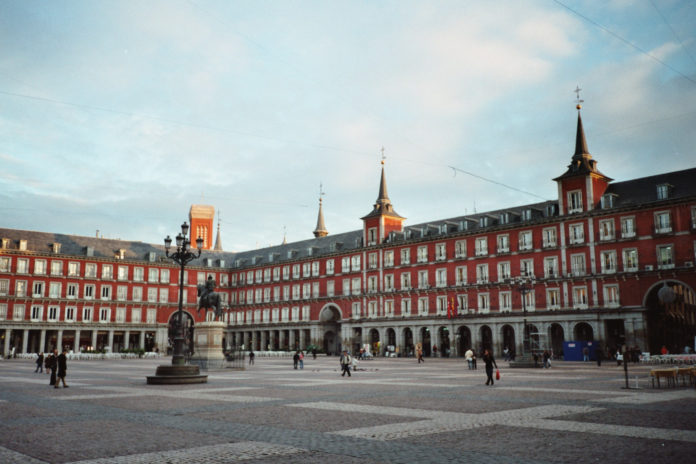 The poet Lope de Vega called this place the “Belly of Spain”. It is a monument of the Habsburg family, the Plaza Mayor, a place that for centuries had a capacity of 50,000 or more spectators. Here people watched jousting, bullfights, weddings of nobles and executions of criminals. Plaza Mayor is to Madrid what the Colosseum is to Rome – the city’s stage for various events.

Did you know? One of the first bullfights in the country took place on the Main Square in 1623 in honor of Prince Charles I (of Wales). The last bullfight took place in Madrid in 1846.

Today the square is the most cheerful place of the capital. The area is open 24 hours a day, where you can eat and drink. Street musicians play their own and popular tunes for passersby. Painters sell their canvases and merchants call in a myriad of souvenir stores. On weekends, collectible coins, medals and postage stamps are for sale in the plaza.

Where is Plaza Mayor

The exact address of the landmark is Plaza Mayor 28012, Barcelona. Plaza Mayor is located at the intersection of Calle de Toledo and Calle de Atocha. The junction is called Calle Mayor. The square’s haven is the city’s central district – the “Austrian Madrid”. The Plaza Mayor is just 200 meters away from its rival, the Puerta del Sol, the square with which it competes for the right to be considered the first square in the capital.

READ
Where to eat in Lisbon: different national cuisine, part 4 for vegans and vegetarians

Plaza Mayor is surrounded by ancient buildings with balconies. On the north side is the home of the former Casa de la Panaderia bakery. It is famous for the fact that its balconies were once boxes for kings and nobles. From these seats, the main elite of the country watched carnivals and executions.

You can take the subway to any corner of the capital. According to the signs from the airport you need to go down into the subway and buy a ticket, which is a guarantee that you can leave the airport and go to your business in the city. It is necessary to keep the ticket, as you will need it to exit the subway.

From the Aeropuerto T4 platform go to the last stop, Nuevos Ministerios, and take the Hospital Infanta Sofia – Puerta Del Sur line. From there go to the Plaza de Espana stop. Go to the cathedral church, cross the road and there is Calle Mayor. It leads to the main town square.

Plaza Mayor itself is far from the metro. For those who like to travel on their own, this is a great opportunity to walk around the city and explore the surrounding area. You can take lines 1-3 to the Sol station, or to the Opera stop on lines 2 and 5, then walk a little on your own. And there is also a bus service to the attraction – #3, #17, #50. 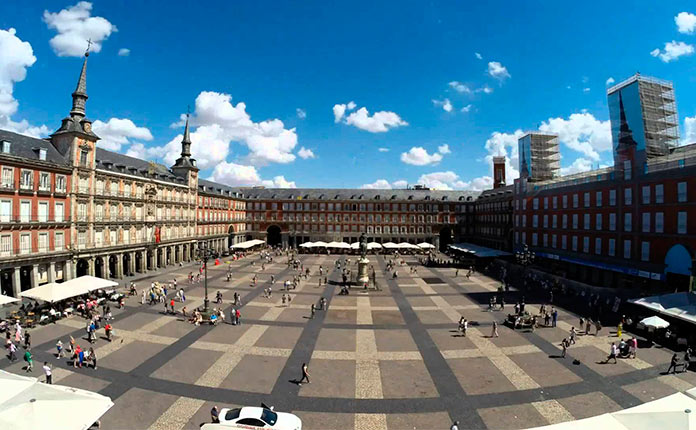 On the Main Square you can find entertainment to your liking – eat in a cafe or restaurant, enjoy a concert. Local theaters put on plays in Plaza Mayor. Under the arches are small stores where handmade items are sold.

It’s interesting. Every Sunday since 1929, you can see hundreds of trays of coins, stamps, and medals in the Plaza Mayor. Thousands of numismatists and philatelists come here all the time.

Plaza Mayor was not always located in the center of Madrid. In the 13th century the main square was located outside the gates of the city, and was called Arrabal, which means “suburb”. A bazaar was founded here, appearing at the crossroads of two roads. The roads later became known as Toledo and Atocha. Philip III transformed the place into a city landmark in 1617 according to the drawings of the architect Juan Gomez de Mora.

The official inauguration attracted the canonization of the peasant Isidoro, on May 15, 1620. Since that time he has been the patron saint of Madrid. This day is a day off and for two weeks there are cultural activities.

As a side note. Summer Nights on Plaza Mayor is a kind of living room of Madrid. In the many cafes you can try sangria, a Spanish wine-based drink with fruit and spices, and listen to musical shows, which are often spontaneously organized here. 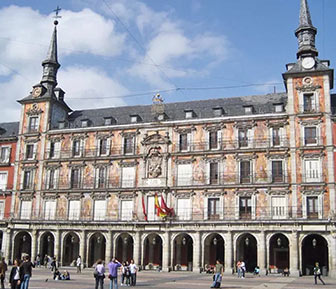 Architect de Mora added a comfortable and sensible urbanism to the appearance of the square. Two structures, the bakery (Panderia) and the butcher’s house (Carniceria), remain unchanged. The bakery made bread for the government court and the loggias were used by the titled nobility. This was the seat of the educational institutions where history and the arts were taught. Nowadays, this place is an archive where ancient panels from different periods are preserved. The King and his courtiers also sat on the balconies of the Carnicería, and these seats were very expensive.

The Plaza Mayor was surrounded by wooden buildings, which at times turned to ash. In 1672, the Pandery suffered as well – only the front wall of the first floor remained, but the bakery was rebuilt. In 1790, the east side of the square was also destroyed. It was rebuilt according to Juan de Villanueva’s plan – the wood was replaced by stone. All along the borders of the Plaza Mayor are the same type of houses and arches, which form nine gates – through them you can go to the city streets. Appearance of the XVIII century square saved until the XXI century. Even in small Spanish settlements there are many places that replicate the famous square.