In the southwest of Bulgaria in the mountainous area is a protected corner of Pirin. When the national park was created, the goal was to preserve this uniquely beautiful and diverse region. Since its establishment in 1962 the protected area has increased seven-fold and today hunting, fishing, logging and other economic activities are forbidden. Geographically, the park is located between the Struma and Mesta rivers and the main part lies above 1,000 meters above sea level. 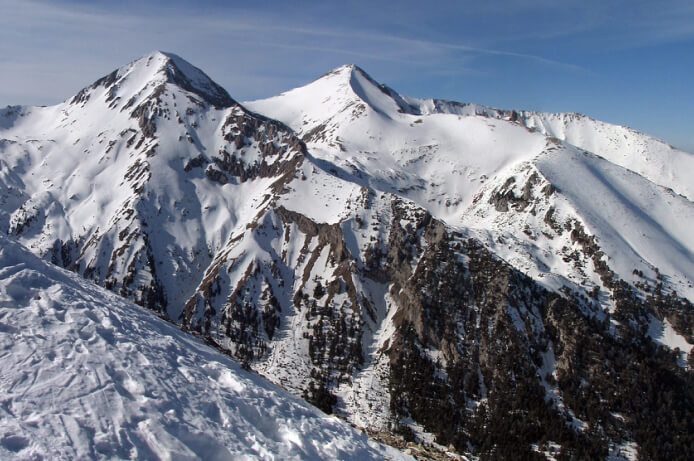 The majestic peaks of Pirin

The Pirin is one of the oldest mountain systems in Europe, whose final appearance was formed after the last glaciation. More than 50 marble and granite peaks over 2,500 m high fall within the boundaries of the park. The main peak is Mount Vihren 2914 m high and it is the third highest mountain in the Balkan Peninsula. 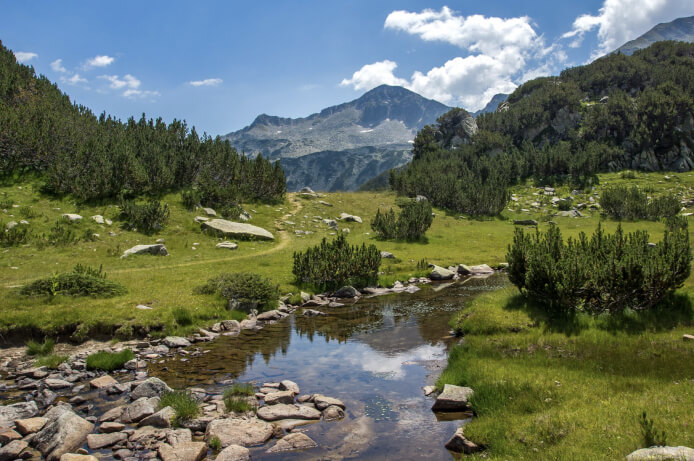 There are many hiking trails on the territory of the park, which are especially popular with tourists from spring to fall. A ski resort with modern infrastructure is open in the winter. The area is rich in karst formations, so fans of traveling through the caves will find unusual places to visit. 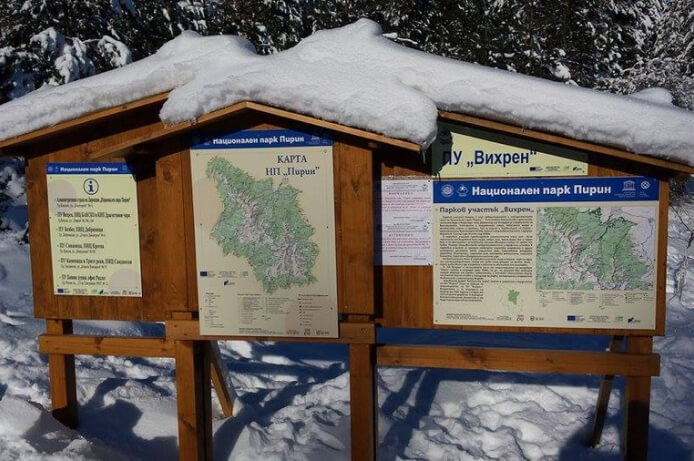 Information stand in the Pirin Park

The modern name of the mountain area came to us from the times when the Slavs were pagans. The main deity was Perun, whose residence was on the highest mountain Vihren. The summit itself is often hidden by clouds, a better place for the residence of the “deity” is hard to imagine. The most ancient name is Judenica, but the etymology of this word has not been studied until now. More understandably, the Thracian tribes called these mountains “Orbelus”, which in modern language translates as “snowy mountains”. During the Ottoman rule, the name Beri de was established, which conveys in Turkish the idea of something solid standing for a long time. 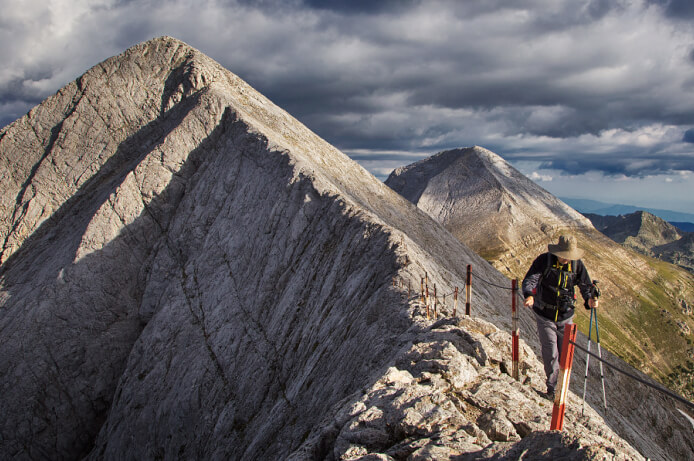 What’s so special about this monument of art? During the existence of the palace complex here ruled the great Bulgarian monarchs: Asen I, King Kaloyan, Ivan Shishman and many other nobles. Thanks to the elaborate infrastructure, visitors can personally explore the fortress towers, the base of the throne room, the restored palace building of the Bulgarian Patriarchate, as well as many ancient structures and mechanical warning systems (bells that start the evening show for visitors).

Especially for tourists in the town of Bansko under the administration of Pirin Park opened an information center. The aim of this project is to inform visitors about the safe routes and peculiarities of the protected territory as part of the program for environmental protection.

The complex includes a room for visitors, a projection room and a permanent exhibition with 20 information modules, recreating the unique ecological system of the region. The center was built at the foot of the mountain, which allows anyone, even a tourist with little time, to learn curious and important things about the unique wildlife preserved in the territory of the Pirin National Park. 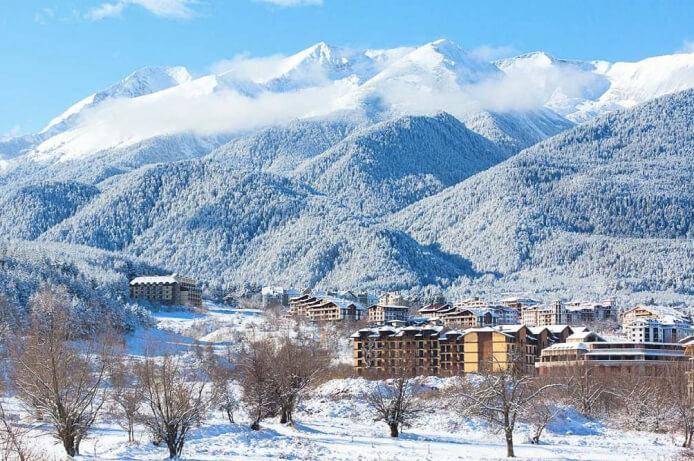 Postal address of the information center:

during the winter period (November – April)

in summer (May – October)

More than two thousand wild animals are protected in the national park in their natural habitat. Here you will often see rare and endangered animals, such as the surviving population of chamois. According to some reports, there are 250 of them at the moment.

The largest representatives are the brown bear, deer, mountain sheep, roe deer and wolf. There are many hares, foxes and other smaller inhabitants, including many rodents. Zoologists identify 45 species of mammals, including twelve varieties of bats in the caves. Mountain streams, rivers, and lakes are home to six species of fish. 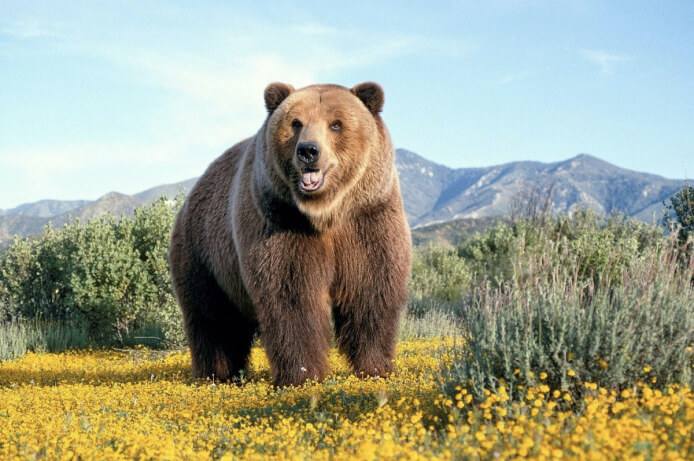 More than 160 species of birds have found a home on the mountain slopes in the dense forests. Several species of owls, falcons, spotted eagles, as well as Balkan larks, peregrine falcons, rock nuthatches and tufted tits are common throughout the reserve. The golden eagle is especially notable in the group of raptors. Today the Pirin Mountains are one of the few places where it has preserved its habitat.

The national park is rich in flora, gradually climbing it varies by climatic zones. In the Struma River valley, olive trees and thermophilic quince grow, while lilies and orchids can be found around the floodplain. Some species are endemic and grow only in this area, including primroses and the Red Book poppies and edelweiss.

At the base of the mountains are mostly deciduous trees, dominated by beech, oak and hornbeam. In the higher areas, the forest gradually changes to conifers, mostly pine, and even higher junipers, turning into alpine meadows. 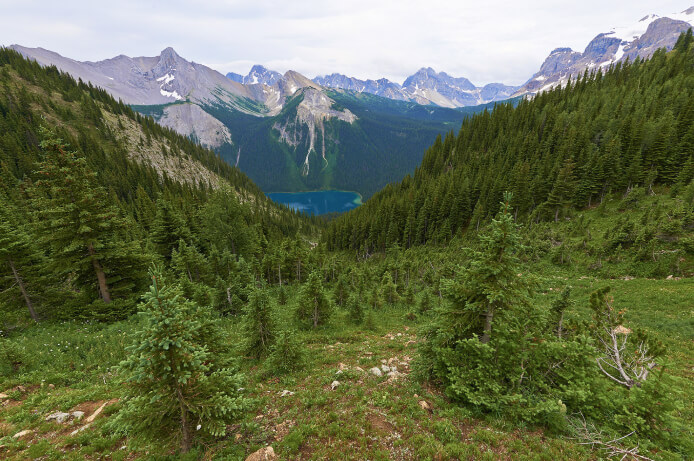 Dense coniferous forests on the slopes of the Pirin mountains

The highlight that tourists try to visit is the Baikusheva Mura, a pine tree 1,300 years old. It was found in the XIX century at an altitude of 1930 meters above sea level by forester Konstantin Baikushev. The tree is impressive in its size, its height is 26 meters, its crown is 7.8 meters in diameter and its trunk is 2.2 meters in circumference. The route can be taken from Bansko to the hut “Bandarica”, then along the path up 300 meters. This species of Bosnian pine (Pinus heldreichii) in Bulgaria is second only to the oak tree in the village of Granite, which is 1650 years old.

The very structure of the mountains allows streams running down into the saddles to form “glacial” lakes (there are up to 170 formations). Large and very small, filled with the purest water, they form a unique ecosystem, unique to this area. Among tourists are widely known lakes Banderyckie, Walyawickie, Wasilakskie and favorite among vacationers Popova Valley 6 km long and 3 km wide in the center with a large body of water.

READ
Top attractions in Funchal, the capital of Madeira, Portugal

Banderica River originates from a group of lakes of glacial origin, the water is perfectly clear, the source and the upper course pass among the granite rocks. On the slope of Mount Todorka at an altitude of 2322 meters is the first lake in the group Toad Lake. It can theoretically inhabit only amphibians, as the depth does not exceed two meters. The next step is twelve meters below, there is the Long Lake, which is sometimes called the Upper Lake. On the next terrace twenty meters below, the place for fishing enthusiasts is “Big” or Fish Lake. The name stuck because of the abundance of fish that live in the body of water. 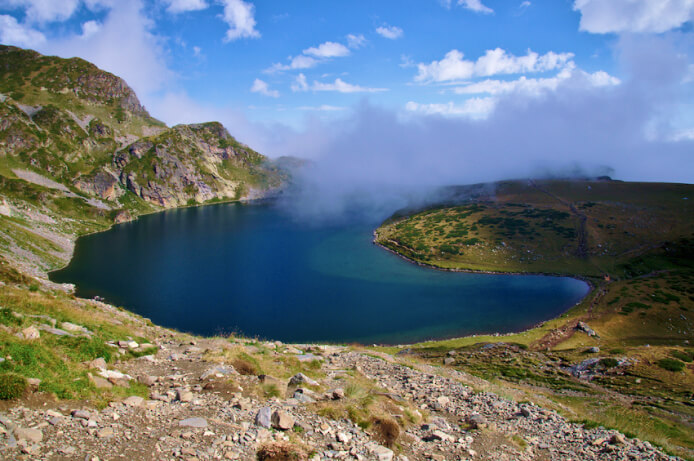 Not far from the Banderitsa River is the picturesque Muratovo or Pine Lake. A narrow stream flows into it, which descends in a chute between Muratova and Groiatska peaks and forms a picturesque bay, as well as two elongated peninsulas in shape. It takes no less than an hour and a half to reach the lake on foot from the Vihren Hotel, heading south. 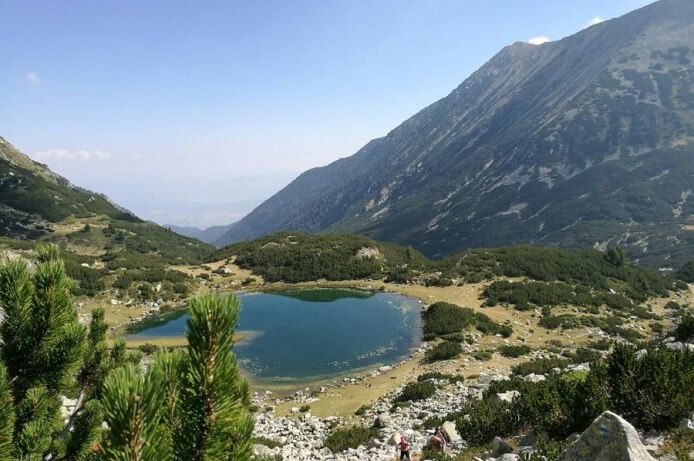 Different sizes, rocky shores, bizarre shapes and beautiful landscapes, it is possible to make an individual hiking route around the lakes.

On the banks of the Bystrica River on the western slopes of the Pirin Mountains, not far from the Greek border is the balneological resort of Sandanski. Twenty hypothermal springs with high mineralization and different temperatures from 42 to 81 degrees are used for treatment and recovery. 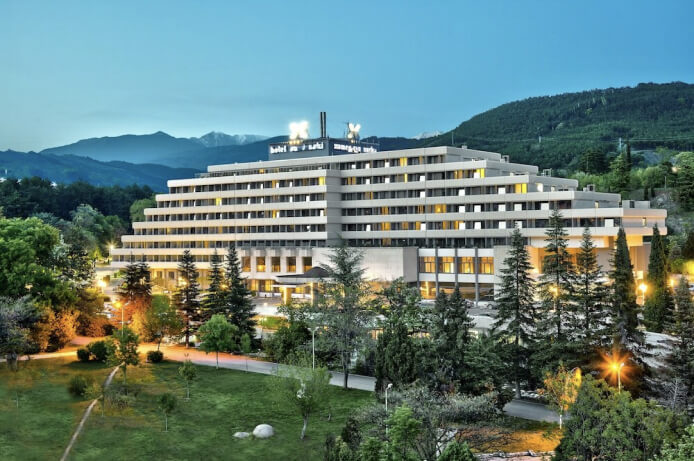 Earlier the village was called Sveti Vrach, but since 1949 it has been named after the Bulgarian revolutionary Jan Sandanski, who is buried near the town of Melnik in the Rozhen Monastery. The resort is located at an altitude of 225 meters above sea level and is unique in its climate, with mild winters and warm and long autumns. The settlement itself is protected by the surrounding mountains and therefore there is no strong wind. Even in winter on a nice day you can often find fans of sunbathing.

The resort is suitable for active recreation, which can be combined with the procedures in the sanatorium. There are organized walks in the mountains, bicycle rides, you can ride in the park on catamarans. You can visit the monuments of Spartacus, Todorov, and Yavorov, as well as the bishop’s church, the tomb-mausoleum of a Roman nobleman, the early Christian complex, and the waterfall over the Bystrica River. 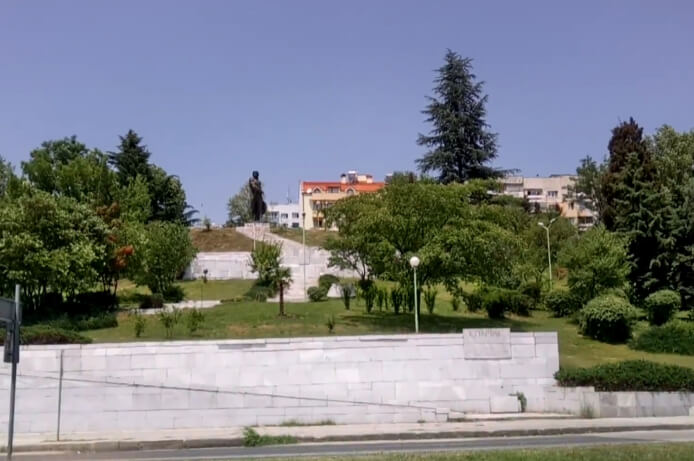 Bansko is a modern center of winter entertainment, located on the slopes of Pirin mountains at an altitude of 936 meters above sea level. There are slopes for beginners and professional skiers. Ski-lifts work along the slopes. In 2020 there was held a World Cup for women in downhill and Super Giant Slalom. 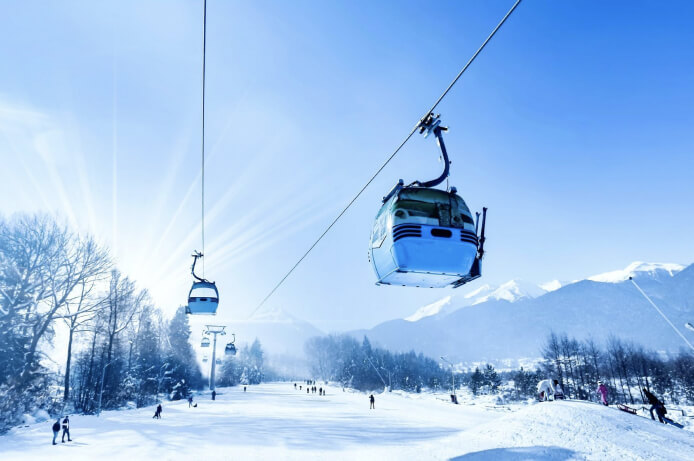 Bansko. Funicular along the ski slope

The town has a well-developed tourist infrastructure – a large number of hotels, apartment hotels, mehan, restaurants and fast food outlets. The resort is easily accessible by road and rail.

There is a house-museum of Nikola Vaptsarov, as well as a historical museum, where you can learn about the birthplace of the national enlightener Paisij Hilendarski and the actress Magda Kolčakova. Guests are invited to a jazz festival in the summer and a biennial dedicated to mountain cinema in late fall. 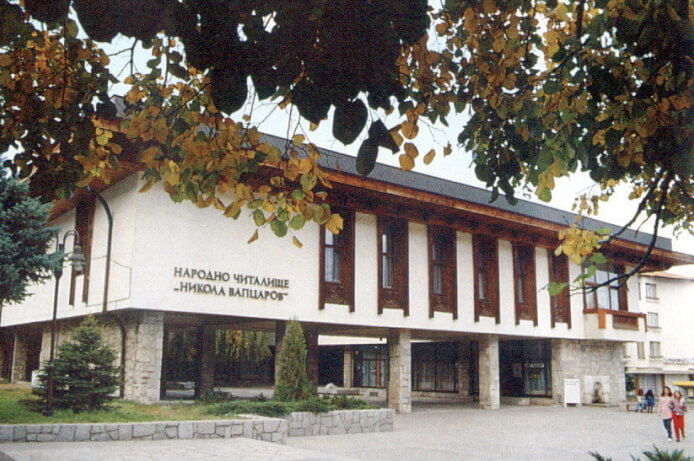