Piran, Slovenia: the most detailed information about the city of Piran, the main attractions with photos and descriptions, location on the map.

Piran is a city in Slovenia on the peninsula Istria. Together with the town of Portoroz it is one of the main resort centers of the Slovenian Adriatic. Piran is one of the most picturesque and beautiful coastal towns of Slovenia, situated at the tip of a small peninsula, which seems to jut into the Adriatic Sea. Its old town is also one of the best preserved historical centers of all cities on the Adriatic, a real gem of Venetian architecture. Piran gives you the wonderful atmosphere of the old winding streets, the charm of sunsets and the coziness of restaurants with fresh seafood and local wine. 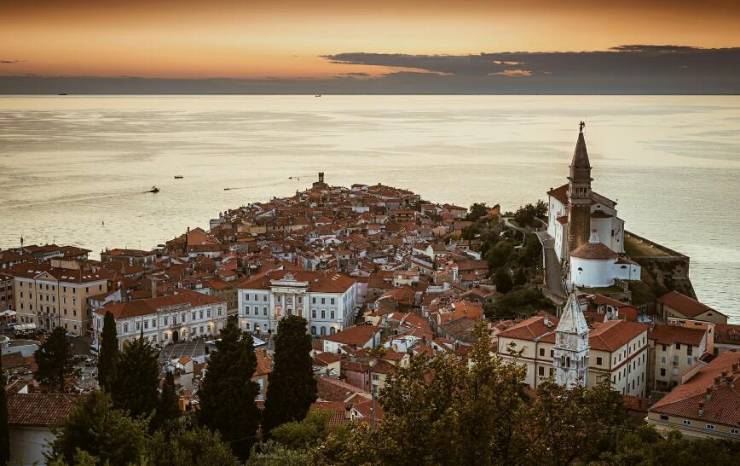 Piran, like almost all Istria, was inhabited in the pre-Roman times. It was inhabited by Illyrians, who were not only farmers, hunters and fishermen, but also pirates and plunderers. The Piranian Peninsula was incorporated into the Roman Empire in the 2nd century B.C.

In the 5th century, with the decline of the Roman Empire and the invasion of the Slavs, Piran and other cities of Istria were fortified. But this did not save it from being conquered by the Franks in the 8th century. The Slavic tribes also settled there. In the 10th century Piran became part of the Holy Roman Empire. 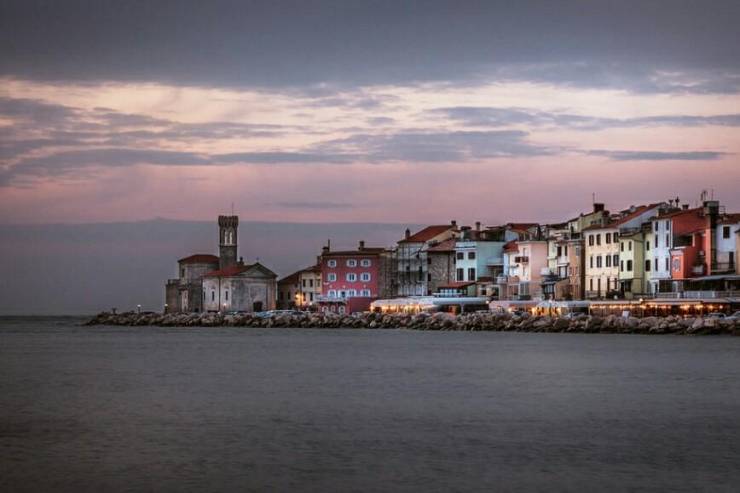 From the 13th to the 18th century Piran was part of the Venetian Republic. The Venetians largely determined the architecture of the Old Town. In 1797 the city was annexed to the Austro-Hungarian Empire. Piran was part of the Habsburg state until World War I. In the 19th and 20th centuries it was a thriving resort town with an excellent market and transport connections. The first trolleybus line in the Balkans was launched here.

READ
Kemer and Side - popular resorts in Turkey 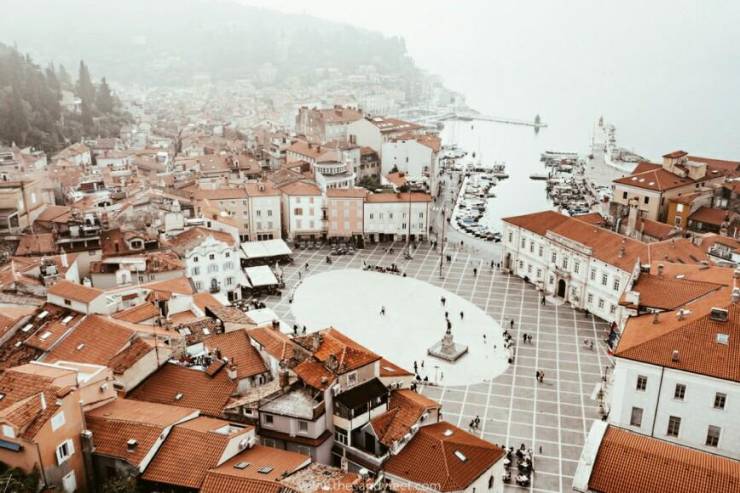 The climate of Piran is humid subtropical. The weather is very warm in summer and cool and rainy in winter. Snow and frosts are rare. Fogs are possible in winter. 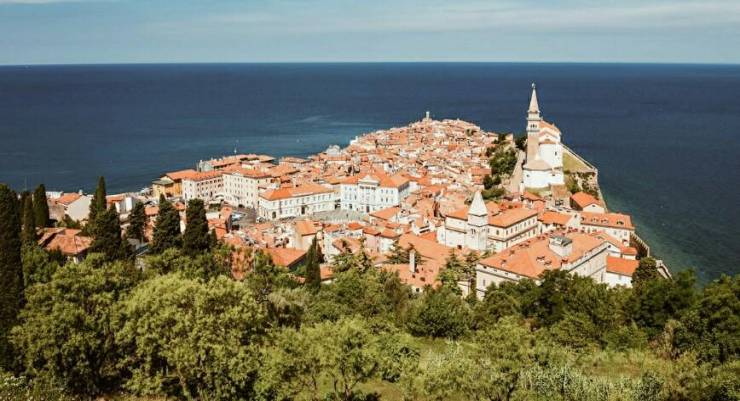 The nearest international airport is in Portoroz. Other nearby airports are Trieste, Pula and Ljubljana. Piran has no railway connection. The nearest railway station is in Koper. The main is the bus service. From Trieste, the bus travels about 1 hour; from Ljubljana, just over 2 hours. Bus timetable and tickets are here – https://www.ap-ljubljana.si/

One of the main attractions of Piran is the old town. The winding old streets and charm of the Venetian architecture will not leave you indifferent. 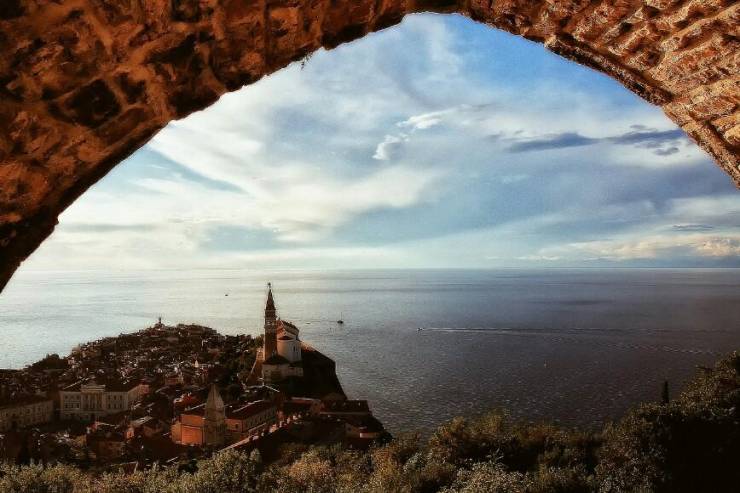 On the main square you will be greeted by a statue of the most famous person in Piran – Giuseppe Tartini. He is a composer and virtuoso violinist who was born in a house a few steps from the square. 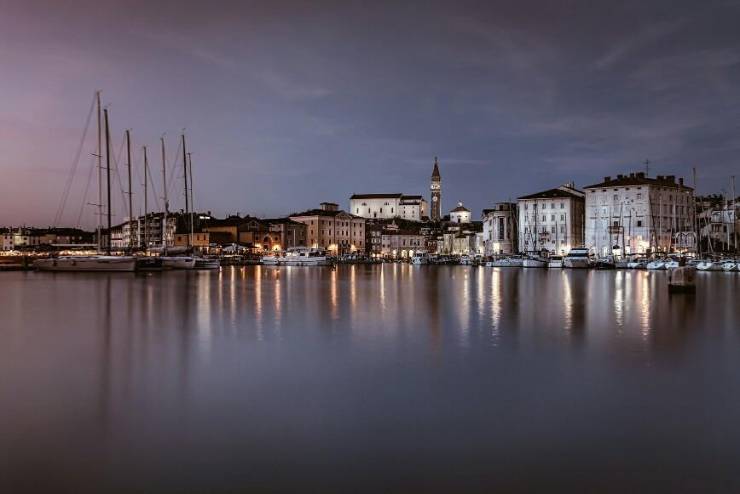 View of Piran at night

The old town itself was surrounded by a wall, probably as early as the 7th century. Nowadays there are fragments of the old city walls. You can find them on Ulitsa IX korpusa. 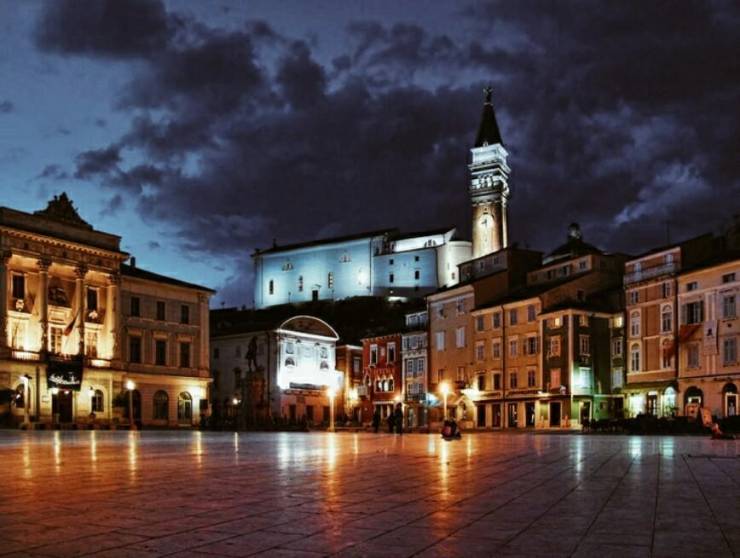 Another landmark of the city is the Church of St. George. It is a Catholic church built on a hill in the Venetian style. The origins of the church go back to the 12th century. If you climb the bell tower, you can enjoy beautiful views of Piran.

The place of attraction is the city promenade. Here you can not only have a pleasant walk, but also enjoy the most beautiful Adriatic sunsets, eat fresh seafood in a cozy restaurant, or meet the evening with a glass of wine.

Among the cultural sites of Piran we should mention the Tartini theater, maritime museum and a large aquarium.

One of the main reasons to go to Piran is to relax. The coast of Piran Bay boasts clean sea and comfortable beaches. The city beach of Pirana is located at the very tip of the peninsula. And the beaches of Fornace and Bernardin are located in the direction of Portoroz.

Video – the city of Piran 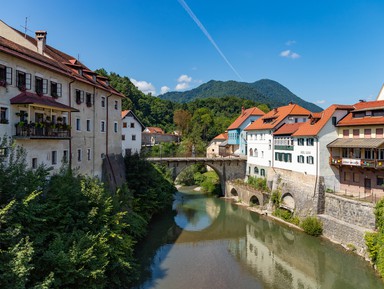 Immerse yourself in the Slovene Middle Ages, listen to the legends of the old town and taste the local cuisine

The Piran Bay in the context of the Croatian-Slovenian controversy

On June 29 the Arbitration Court in The Hague formally put an end to more than a quarter of a century long territorial dispute between Croatia and Slovenia over the Piran Gulf.

The Bay of Piran is part of the Gulf of Venice. After World War II, the territory north of the city of Trieste, located in the northwest of the Balkan Peninsula, was a UN Mandate territory until 1954, then was divided between Italy and Yugoslavia. The territories were finally delimited by the Treaty of Osima in 1975. The dispute began in 1991, when Slovenia lost direct access to international waters after the breakup of Yugoslavia. Despite the fact that it is washed by the waters of the Adriatic Sea, to enter international waters, ships must cross the territorial waters of Croatia or Italy, which makes Slovenia virtually dependent on these countries and creates a security threat in case of military conflict.

Until recently, the Piran Gulf, as proposed by Croatia, was divided equally between the two countries, but this did not solve the problem for Slovenia. In order to have direct access to international waters, it needed to possess most of the waters of the disputed bay, as well as a corridor through Croatian waters.

READ
Why you should visit Tarangire National Park

The dispute had been in limbo for nearly twenty years, until it became an obstacle to Croatia’s accession to the EU. In this situation, it agreed to begin a dialogue, and representatives of the two countries signed a document in 2009 on international arbitration in The Hague, mediated by the European Union.

In 2015, a scandal erupted over leaked information that a Slovenian foreign ministry representative and a judge tried to illegally influence the decision. This was preceded by a number of unofficial statements and evidence that the decision was not in favor of Croatia. In this unfavorable circumstance, the country’s leadership decided to announce its withdrawal from the arbitration treaty, which automatically entitles the court to declare the decision subsequently rendered invalid.

Despite the absence of one of the parties, the Hague arbitration court continued the dispute after replacing the discredited judge. The EU has repeatedly urged the country to return to the negotiating table, but this has not happened.

Thus, the decision of the arbitration court on June 29 this year in favor of Slovenia, according to which it gets 3/4 of the Gulf and a corridor to international waters through Croatian waters, was not a surprise to any of the parties in the dispute. Croatia declared its refusal to accept the decision, to which it is formally entitled. At the moment, the country continues to control half of the Gulf of Piran, and the authorities emphasize that there are no obstacles to the passage of ships from Slovenian ports through Croatian waters, but Zagreb refuses to provide a separate corridor.

It seems that the situation has become as deadlocked as it was more than 25 years ago. One can even assume that the purpose of creating arbitration, at least on the Croatian side, was not to reach a compromise, but to remove obstacles on the country’s path to the European Union. To ensure Slovenia’s real security, the other side would have to make very serious territorial concessions, which does not make any sense for it, as the current landlady of the situation.

Moreover, since the territorial ownership of the corridor according to the court decision does not change, in case of a real threat Croatia will be able to close it or limit the passage of ships. In peacetime, as stated above, there is no real need for it. A major change will be the loss of a quarter of the waters of the Gulf of Piran, making the water border unsafe close to the land part of the country. The likelihood that the country’s leadership would voluntarily agree to such a thing is practically non-existent. So, assuming no third-party interference in the dispute, we can expect the status quo in the Piran Gulf to continue in the coming years.