Pergamon museum, or as it is called, Pergamon is an unusual and quite interesting place. It impresses not only by its scale, but also by its unique collection of exhibits, most of which date back to the pre-Christian era. 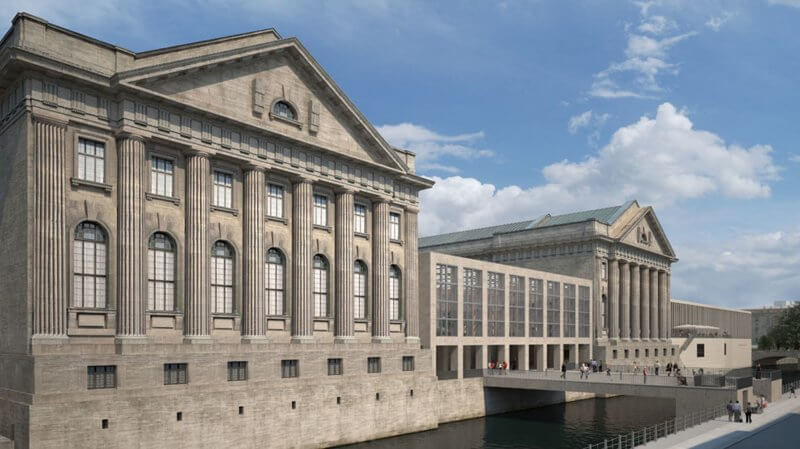 The Pergamon Museum, located on Museum Island, can be called without exaggeration one of the most visited places in the German capital. In 2013 it was visited by more than 1 million people, and every year the number of tourists coming here is growing exponentially. On the territory of the complex you can meet both ordinary people and famous politicians, famous actors and stars of the world stage. All of them are attracted by the unique exhibits, whose history accounts for hundreds of thousands of years. Together with works of ancient Asian and Islamic art they constitute an incredibly valuable collection, which in 1999 was included in the UNESCO World List. 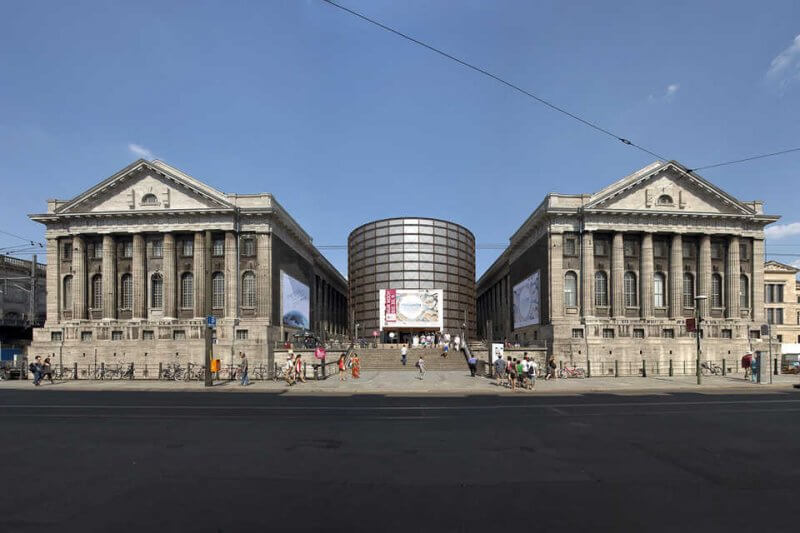 Curiously enough, until recently the museum’s collections were only of interest to curious tourists and connoisseurs of ancient history. However, once all the exhibits have been collected and restored, suddenly Turkey asserted its rights to them. The Turkish authorities justify their claim by claiming that the city of Pergamon, after which the panopticum was named, was located on the site of the present-day Republic of Turkey and thus everything found there should belong to that state.

The Pergamon Museum in Berlin was founded by the German engineer Carl Hamann, who oversaw the paving of a new road in a country in Asia Minor. In the distant 1878 during the building works he stumbled across the ruins of an antique frieze decorated with bas-relief sculptures of ancient heroes and Olympic gods. This was the legendary Altar of Zeus in Pergamon, now considered the main treasure of the museum’s collection. 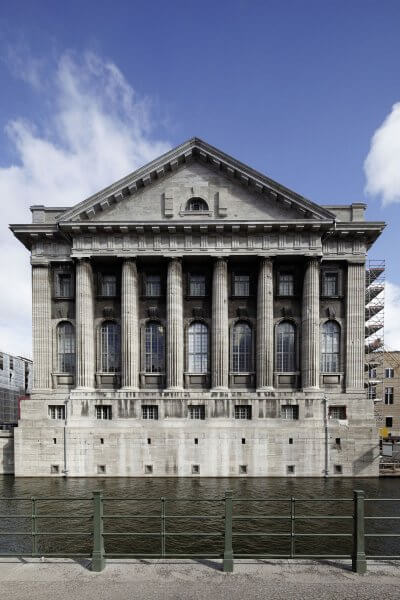 But when the fascinating find was shipped to Berlin, it became clear that there was nowhere else to display it. It was then that the decision was taken to build Pergamon, a separate structure housing not only the artefact, but also numerous exhibits of ancient Asian and ancient sculpture. Thus appeared the first Pergamon museum, which existed no more than 5 years and was demolished after the appearance of huge cracks in the foundations.

READ
Bologna, Italy - the capital of the Emilia-Romagna region

The construction of the second building began almost immediately, but work on it was repeatedly postponed. First, they were interrupted by the death of the chief architect, who was long sought a replacement, and then the First World War and the subsequent financial crisis, which significantly undermined the economic situation in the country. As a result, the new museum complex was opened only in 1930. – 23 years after laying the first stone.

But the troubles in the fate of Pergamon were not over. During the Second World War it suffered a lot from the air bombardments, and after the war it lost most of its exhibits – they were taken to the territory of then USSR. A few decades later part of the collection returned to Berlin, but some of its samples can still be seen in museums in St. Petersburg and Moscow.

The Pergamon collection consists of three parts. One of them is devoted to the Greco-Roman era, the other two to the ancient-Islamic and Near Asian cultures. By and large, these are separate expositions connected into a single complex. 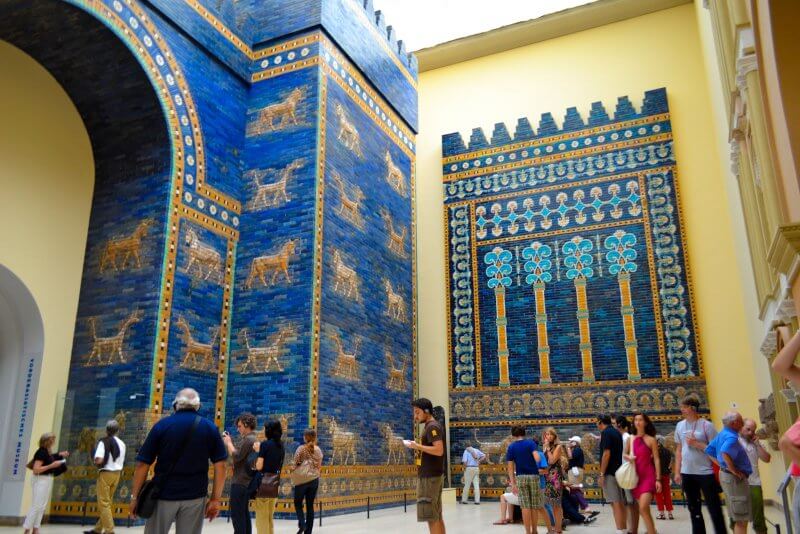 The Gate of the Goddess Ishtar

The first thing a visitor of the Pergamon Museum sees is the majestic gate of the goddess Ishtar, which dates back to the 6th century BC and was found during the excavations of Ancient Babylon. Historians say they were part of the Processional Road used during the celebration of the country’s main holiday, the New Year. On the blue mosaics decorating these gates one can easily see bas-reliefs of various animals, images of mythological creatures resembling prehistoric lizards, and even a cuneiform inscription inscribed by Nebuchadnezzar himself.

Even with its very impressive size, this construction can by no means be called the museum’s largest exhibit. The fact is that the building of Pergamon managed to place only the outer part of Ishtar – the inner gate, which is even taller, simply did not fit into it. The Road of Processions itself, leading from Ishtar to the shrine of Esagil, is also present here. The remains of the ceramic panels on the walls on both sides of the sacred road made it possible to reconstruct with absolute precision one of the main wonders of ancient Babylon. 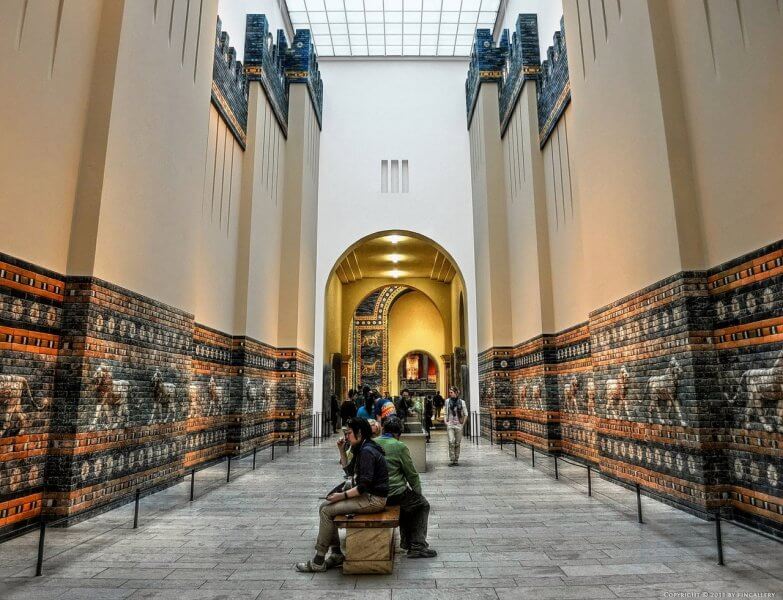 Both the gate and the panel were delivered in parts and assembled on site. And as transportation of exhibits demanded considerable financial expenses, the founders of the museum took only the patterned tiles, finishing the missing elements on their own. 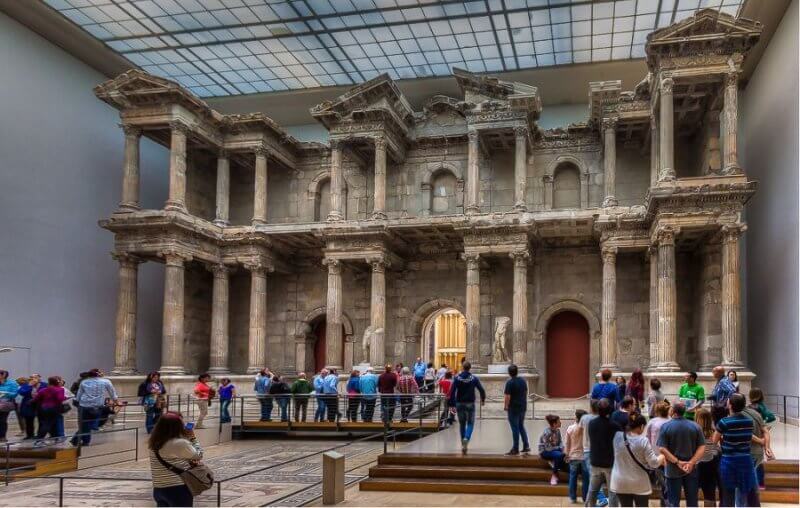 Another attraction of the Pergamon Museum is the Miletian Market, the remains of which were found in Asia Minor. Despite the fact that the market was created in the 1st century A.D., the construction is perfectly preserved and has survived to this day in its original form. In Berlin only some of the elements of the market were created, and even those serve as supports for the original parts. Proof of this is the advertising inscription of the local merchant, located on the right side of the entrance to the bazaar. The composition is completed by several city buildings, among which the most important is the Temple of the Cult of the Ruler of Ancient Rome, and the floor of one of the villas, covered with ancient mosaic tiles.

Pergamon also has a large collection of gold jewelry, household items, antique statues and works of art from the Assyrian, Sumerian and Babylonian empires. Most of them are over 6,000 years old. The most noteworthy are the clay tablets created in the 7th century B.C., the remains of the ceremonial hall of Nebuchadnezzar II, a huge stone frieze, prayer mihrab, samples of the first calligraphy and various reliefs depicting scenes from ancient life. No less popular are the Allep Room, decorated with carved panels and luxurious Persian carpets, and the walls of the Mshattu Palace, decorated with floral ornaments and drawings of fantastic creatures.

If you look at the photos of the Pergamon Museum in Berlin, we can see that not so long ago its collection was enriched by another unique exhibit. It is a panorama of Pergamon, a huge room in which the museum staff managed to recreate the ambience of the ancient Turkish city with a library, a bustling oriental market, and figures of local residents. To enhance the effect, the visual picture is complemented by lighting and a cacophony of sounds.

The Great Altar of Zeus, which served for open-air worship, is perhaps the most important archaeological find of Pergamon. The sanctuary, considered one of the most famous structures of ancient times, is strikingly monumental in its appearance. The huge stone plinth mounted on a five-stage foundation, the wide marble staircase leading to the upper floor of the altar, the Ionic portico surrounding the last tier – it is hard to believe that all this was erected without the help of cranes, excavators and other construction machinery. 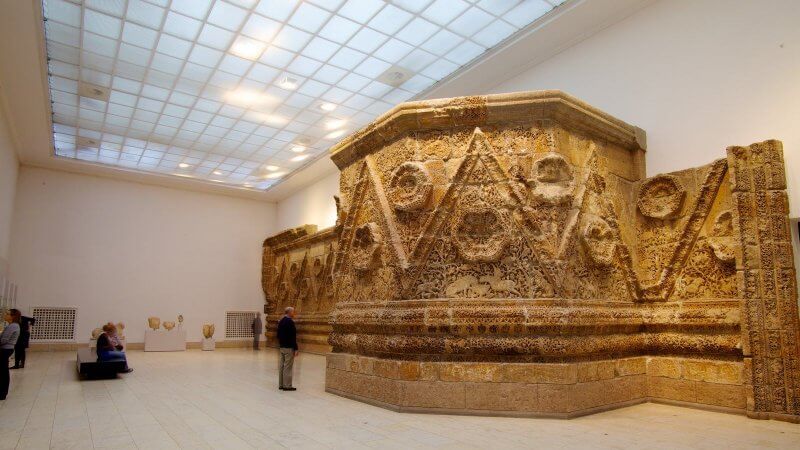 Inside this composition is a small altar courtyard, which actually housed the altar. The roof of the construction was decorated with unusual sculptures due to which the altar reached the height of not less than 9 meters. On all perimeter of the altar the well-known Big Frieze covered not only the plinth, but also the lateral walls of the stairs with a continuous band. On this great frieze were carved bas-reliefs depicting the battle of the main Olympic gods and legendary titans. Another frieze, smaller, was in the courtyard and was dedicated to Telifus. 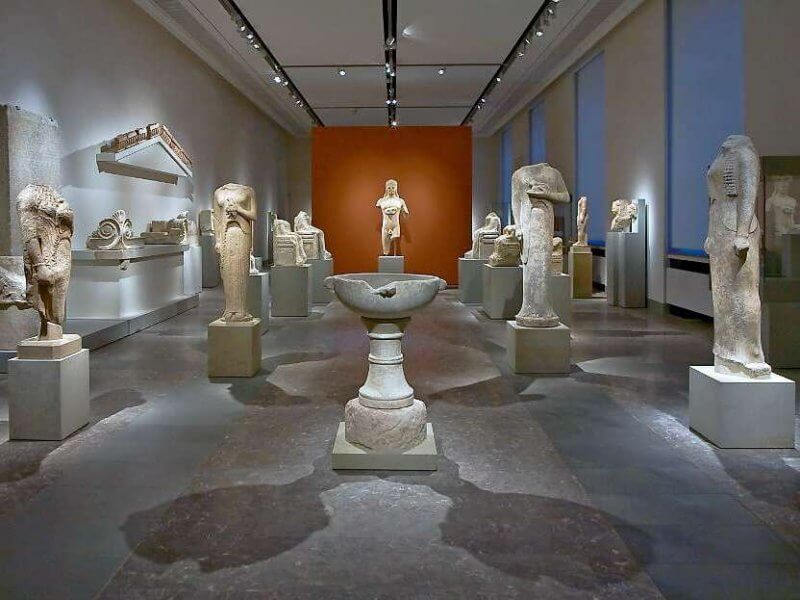 Unfortunately, the structure installed in the hall of the Ancient Assembly is not an exact copy of the ancient altar. The fact is that only the foundation and fragments of the pedestal have survived from the legendary Pergamon sanctuary. But the archeologists found the columns’ capitals and trunks, statues, floor slabs, cornices, relief images of both friezes, numbering over a hundred plates, and other elements, which formed the basis of the main museum exhibit. With their help, scientists were able to recreate the eastern wall of the altar, where the main part of the decoration was located.

The reconstruction of this construction lasted for several years, because the found fragments had not only to be restored, but also placed in the right order. A team of historians, archeologists and scholars of religion had to determine which wall was occupied by which fragment, put the images in the right order and fasten the whole thing to a special base.

The Pergamon Museum is located at Bodestrasse 1-3, 10178 Berlin, Germany.

On Catholic Christmas Eve (December 24), the museum complex is closed.

If you are going to visit the Pergamon Museum in Berlin, read the advice of those who have been there: 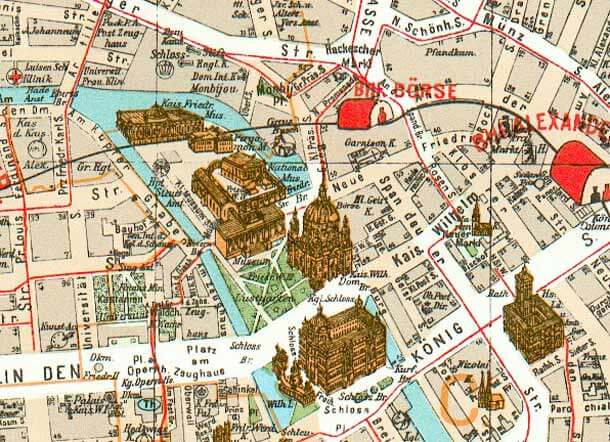 Video: tour of the Pergamon Museum.

READ
Secrets of the eternal cities of the Maya

Updated: 28 Jun, 2018 The pearl of Ireland is rightly considered the Ring of Kerry -…

Updated: 18 Jan, 2019 Topkapi Palace is a unique architectural monument in Istanbul, which…

The Munich residence, which is Germany’s largest inner-city palace, has not only a rich…

Pergamon is not an ancient Turkish city. It is an ancient city founded by natives of mainland Greece. It was not the ancestors of the Turks, honestly, who created the Altar of Pergamum. And also it is not clear – why did they put a photo of the walls of the Mshatt Palace where they talk about the Altar of Pergamum? The uninformed will think that this is the Great Altar.

Hello Inna, you are right about the city of Pergamum. In the article we do not claim otherwise. All pictures are signed, if you click on them you will see what is shown. The “unenlightened people” should not have any questions:)