Wonderland Park is laid out on the site of a former Turkish fortress, and is part of Batumi’s waterfront, located to the north of the city center and the old seaport. During the extensive reconstruction and restoration of Batumi in 2007-2013 this formerly rather neglected territory was transformed into a marvelous pedestrian zone, which is the perfect “semantic beginning” of the main tourist attraction of Batumi – the Seaside Boulevard, which stretches from the Wonderland Park to the southwest for 7 kilometers! 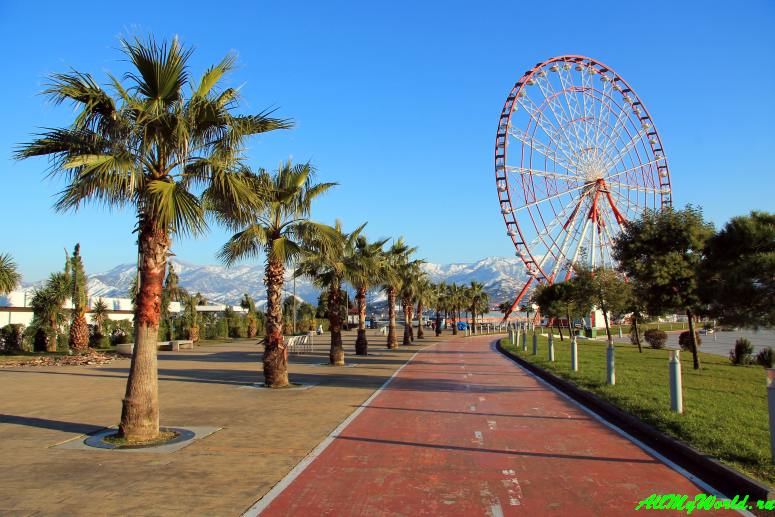 The beginning of Batumi Boulevard

Wonderland Park consists of several quite self-sufficient attractions: Batumi Lighthouse, the Alphabet Tower, the moving sculpture “Ali and Nino” and the Ferris wheel. And it is from the wheel I suggest to begin our walk through Batumi Wonderland Park.

Note: How to buy good insurance cheaply in Georgia:

Good working insurance was not easy to find before, and now it has become even more difficult because of the constant fluctuations of the ruble’s exchange rate against world currencies. For the last few years I have been taking out insurance through an online service Cherehapa – here you can compare products from different insurers and choose exactly what suits you best. I also recommend reading the detailed article on choosing the right travel insurance, because it can save you from unnecessary overpayment and more serious trouble.

It’s a great attraction for kids and adults, and also a good viewing platform: from the top point you can enjoy amazing views of the bay, mountains, downtown Batumi and its famous new buildings: the Alphabet Tower and the unfinished building of the Technological University.

Mode of operation: Every day without weekends, from 10:00 to late evening. One round costs 3 lari. 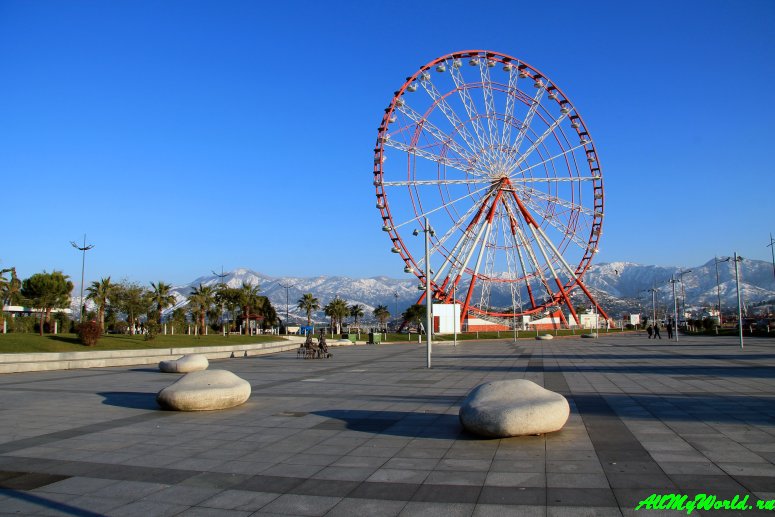 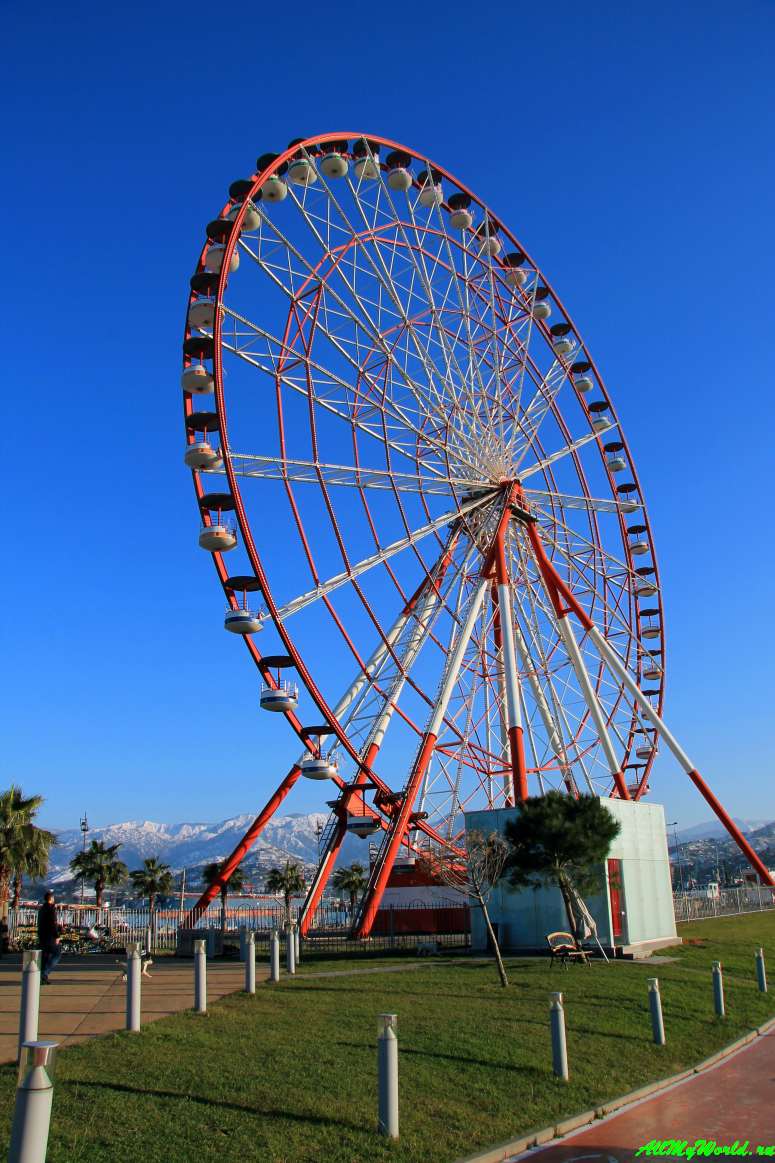 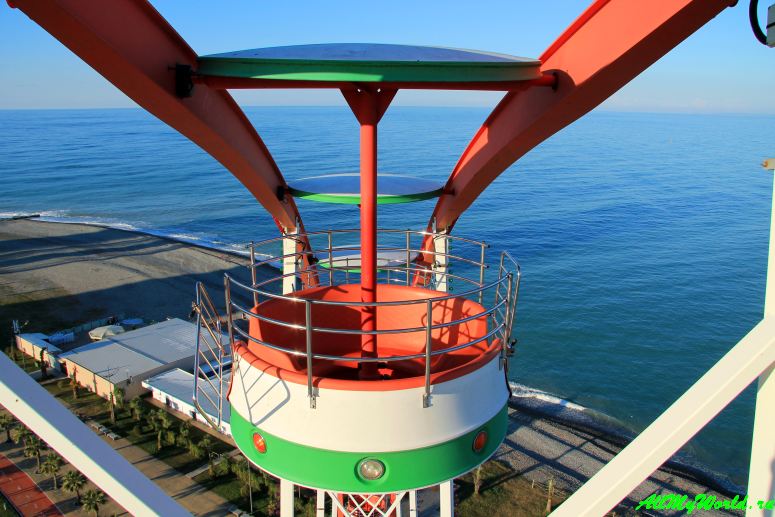 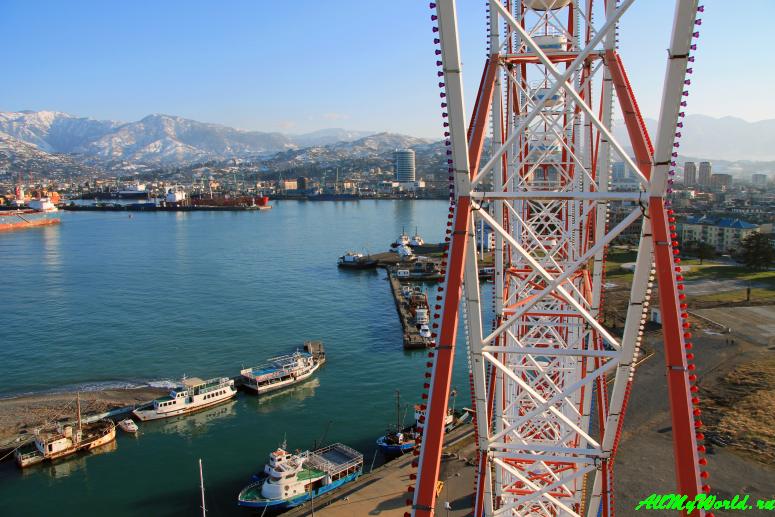 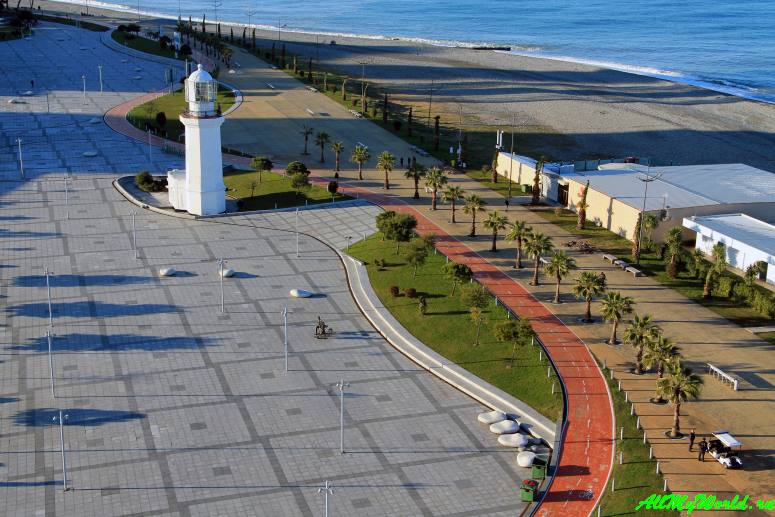 Batumi Lighthouse – view from above 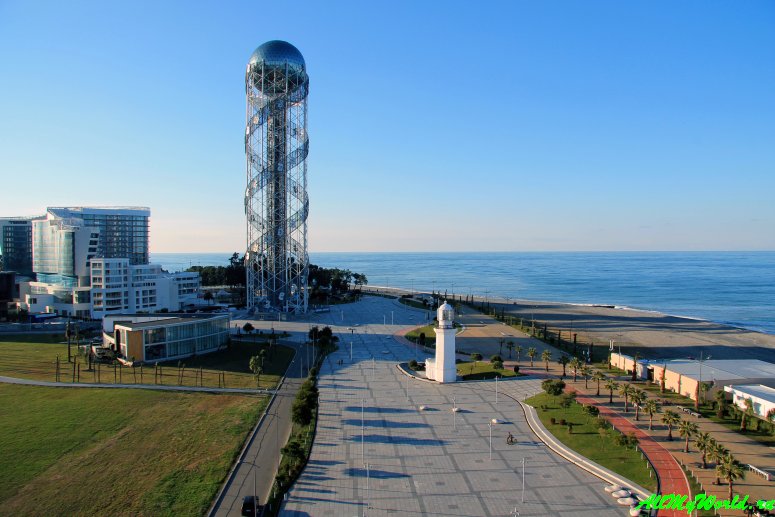 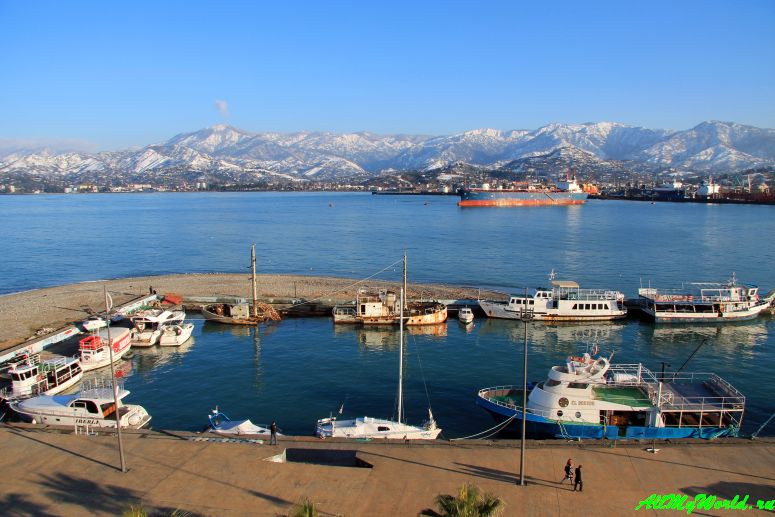 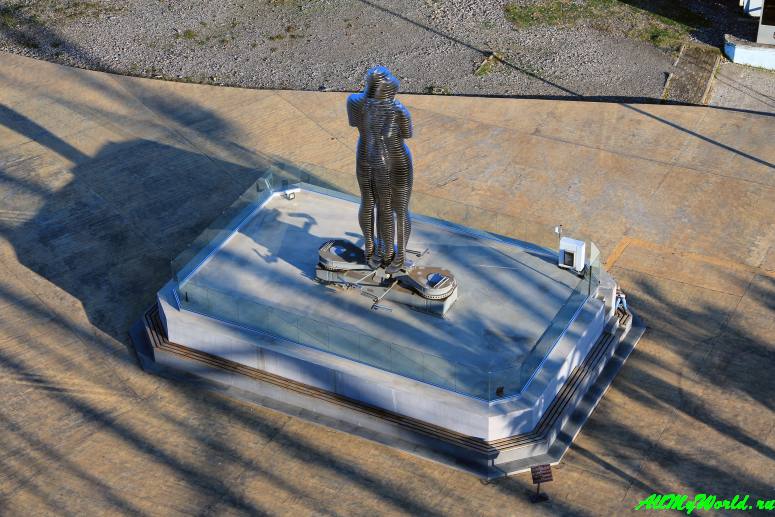 And now let’s take a closer look at it all.

One of the most unusual buildings in modern Batumi and a tribute to the Georgian alphabet, which is one of the 14 oldest in the world. Created by architect Alberto Domingo Cabo, the 130-meter tower is a model of a DNA molecule, and the 33 letters of the Georgian alphabet play the role of its nucleotides. 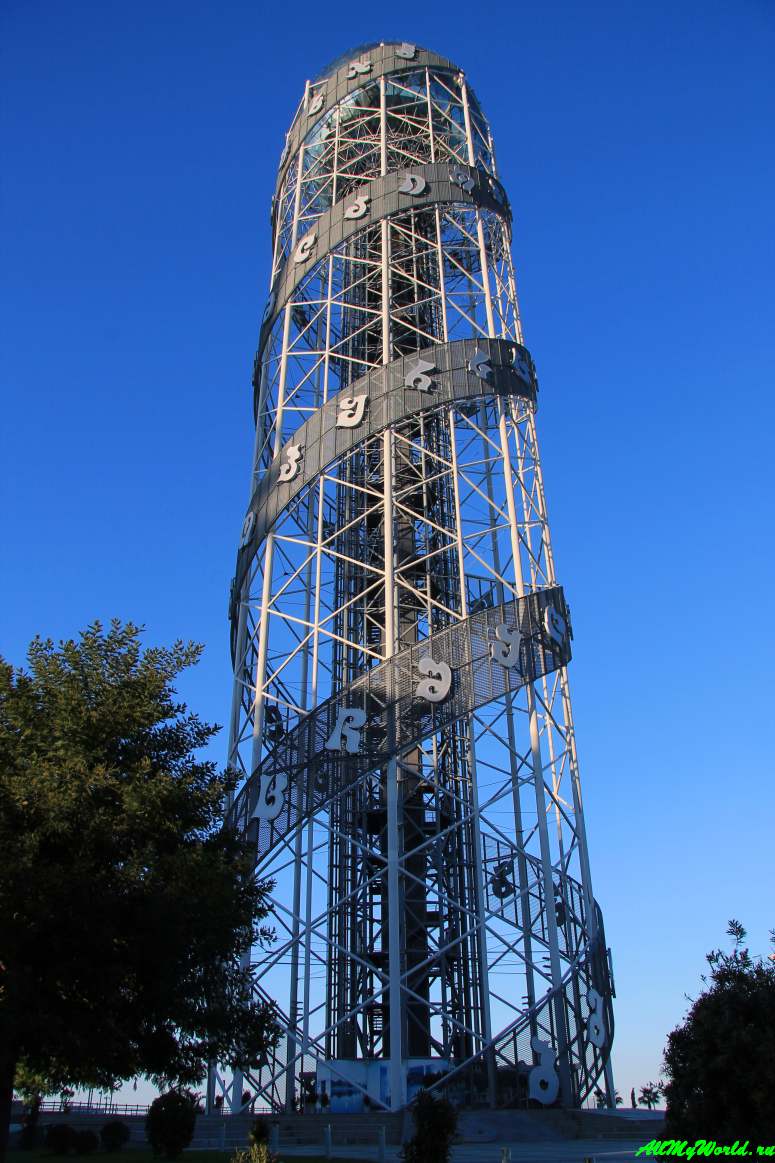 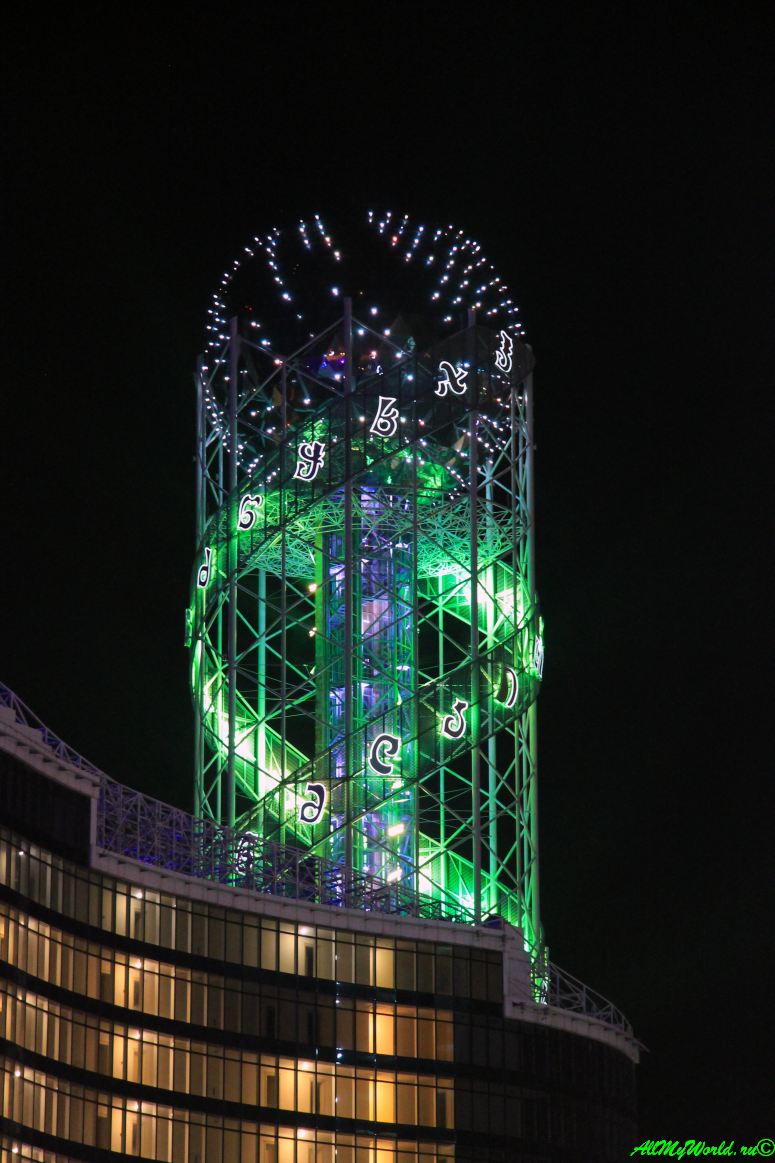 The sphere at the top of the Alphabet Tower consists of two hemispheres: the lower one houses a restaurant and a lounge bar, while the upper one has an observation deck. 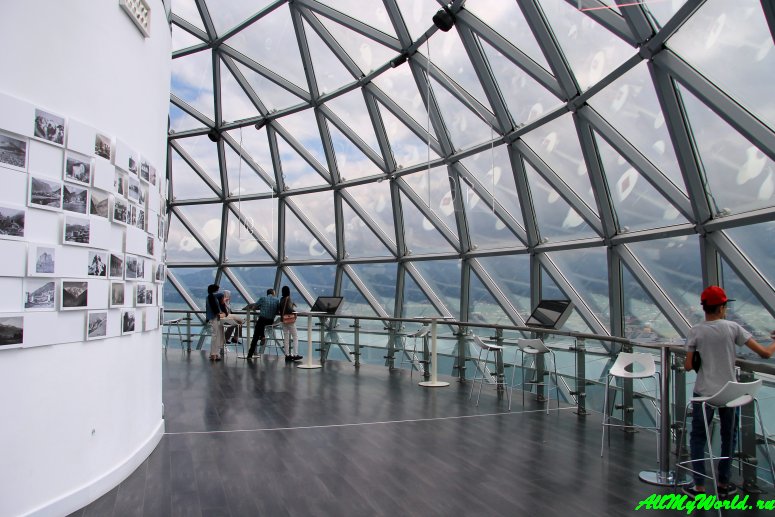 The observation deck, in turn, is also two-tiered – the upper level can be accessed by stairs. The dome rotates, a full turn takes about an hour. 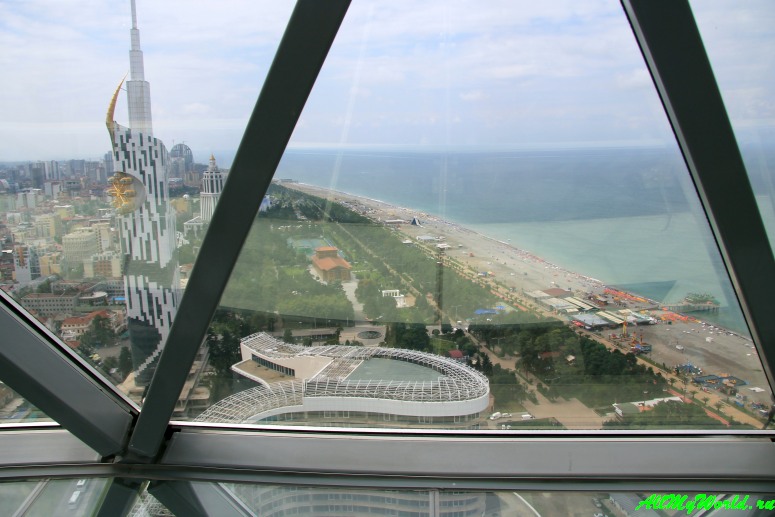 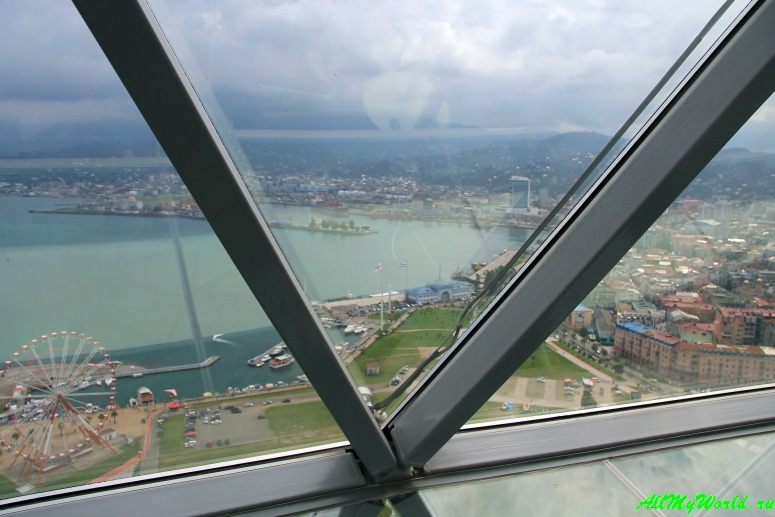 To get into the globe, you have to pay 8 GEL at the ticket office below (the ticket office is located inside the cafe). You go down to the restaurant by elevator, then change the elevator and take another elevator to the observation deck and then take the stairs. 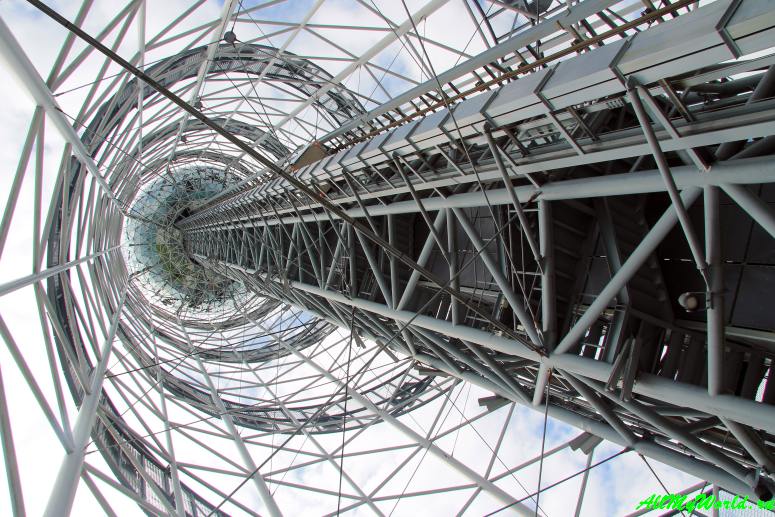 The sculpture “Ali and Nino”

Two 8 meter statues installed on the seashore in honor of the heroes of a popular Georgian novel about the love story of a Georgian princess Nino and an Azerbaijani aristocrat Ali during the tragic events of World War I and the troubled times that followed it. 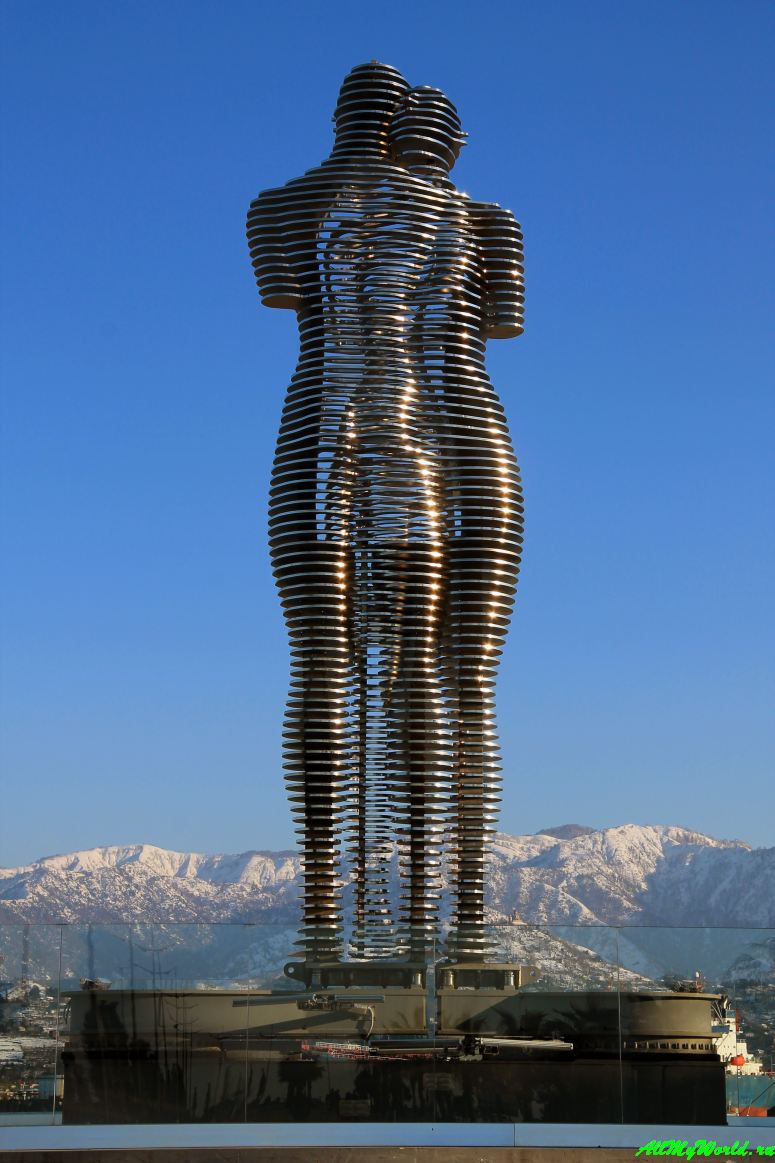 Not only the fate of the main characters, but also of the novel itself is unusual: it was published in 1937 in Vienna in German and its author is still unknown. The manuscript was signed by a certain Kurban Said, and in Azerbaijan it is believed that under this pseudonym Yusuf Chemenziminli hides, and the description of Ali’s fate is largely autobiographical. The unusual and talented story has been translated into 33 languages, and its adaptation, “Ali and Nino,” was released in 2016.

The statues are equipped with a special mechanism and can move: Ali and Nino approach each other, merge into one, but do not touch, pass through each other and end up behind each other, moving as far away as possible. Then they gradually turn around and begin their way toward each other again. 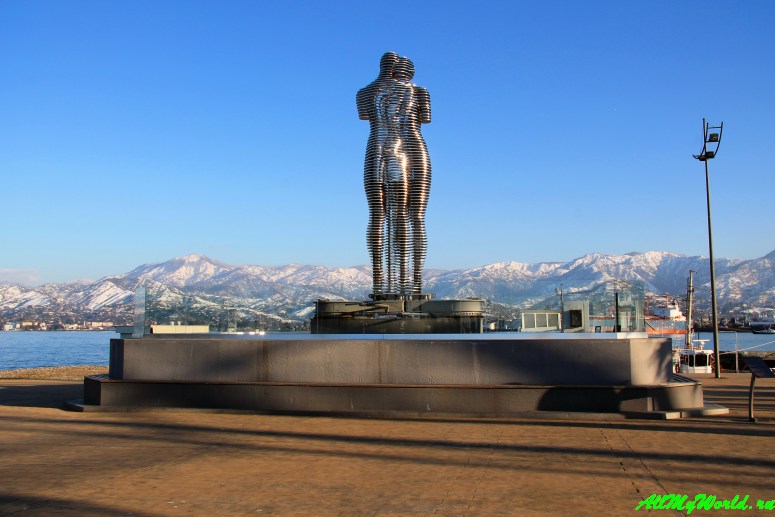 This is not only an allegory of love, which is not afraid of any obstacles, but also a very unusual and interesting metaphor of relations between man and woman: if partners find themselves too close to each other, they stop “seeing” each other, lose “contact” and then find themselves “back” to each other – too much closeness is not better than a long distance. The figures complete their full cycle in about 10 minutes.

Ali and Nino originally stood on a special concrete platform at the very edge of the cape, but after a big storm in 2015 they decided to move them away from the edge of the surf. During transportation, one of the statues fell and was badly damaged – it took more than a year to repair it.

To the north of the former seaport, the 20-meter high Batumi Lighthouse shines with its fresh paint: 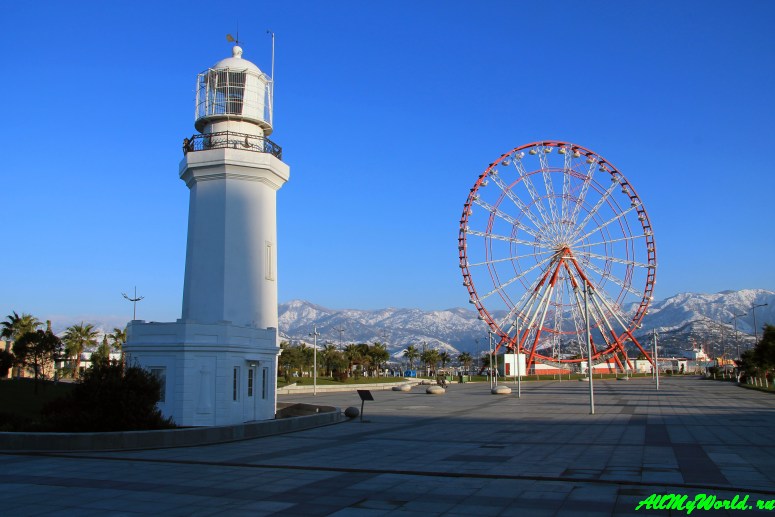 It was built in 1882 for a utilitarian purpose: to make it easier for ships to navigate Batumi harbor. Both the port and the lighthouse gradually fell into disrepair and disrepair, until the former was moved to a new location and the latter was restored as part of an extensive program to reconstruct and restore Batumi, launched during Mikheil Saakashvili’s presidency and still underway today.

The lighthouse was once located at the very tip of a promontory that protruded far into the sea. But during the creation of the Seaside Boulevard a big amount of ground was covered with it (fact that Batumi beach itself is also filled up with earth). And now the location of lighthouse is clearly seen, how much the sea was moved away from the city quarters in the end. The lighthouse itself is the oldest preserved structure in Batumi – it is interesting that at one time its keeper was Mikhail Stavraki, who has entered the history by shooting the famous revolutionary lieutenant Schmidt in 1906. 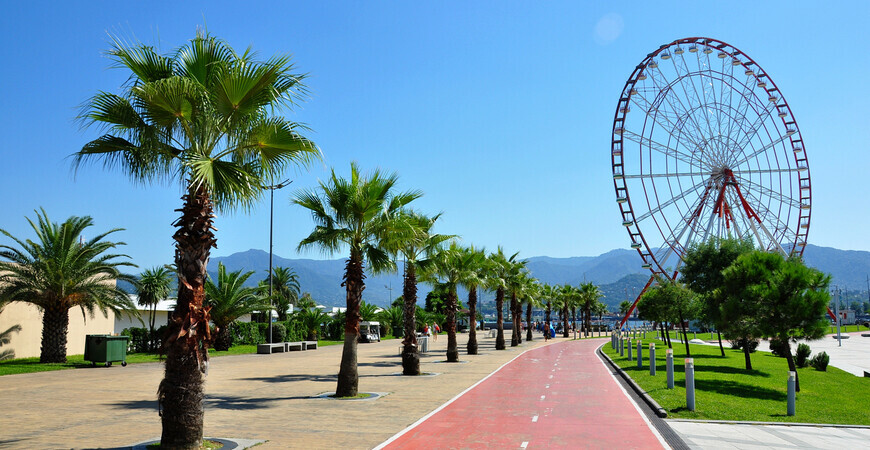 Miracle Park is a recreational area in Batumi with many of the city’s attractions and several attractions. As a rule, most tourists include Miracle Park in the check-list of walks around the city – it is very popular. It is known that for a long time the area was in disrepair, but since 2013 this area is saturated with art objects, so a huge number of locals and tourists visit it every day. Wonderland Park is interesting not only for its unusual buildings and monuments, but also for its landscaped locations suitable for cycling or skateboarding, which is how it is used by some city residents.

Tourists recommend visiting Miracle Park in Batumi in the evening to appreciate the illumination installed here.

It is known that the facilities at Miracle Park in Batumi were erected in a fairly short period of time. Therefore, this recreation area at one point literally “grew” to the north of the Old Town area. Among the numerous art-objects are several of the largest. You can learn more about each of them from the list below.

This is a peculiar monument to the Georgian alphabet. Alphabet Tower is a high-rise structure with illumination. There is a peculiar ribbon with 33 letters of Georgian alphabet on the “body” of the construction. Initially it was planned to be a multifunctional building, but at the moment there is only a restaurant, which is very popular among residents of the city and tourists. It is also known that the concept of the Alphabet Tower was developed by architect Alberto Domingo Cabo. He owned the idea of reflecting the alphabet in the form of DNA structure.

It is probably the largest attraction in the city. The height of the Ferris wheel in Batumi is 55 meters. From its top there is just a unique view of the surroundings. It is known that there are 40 comfortable cabins for visitors, and being on them is very convenient to watch the changing views and scenery. The Ferris wheel was assembled in 2011 and for many years has been bringing joy to the visitors of Miracle Park every day. The cost of visiting the attraction is not more than 10 GEL.

This object of the Miracle Park, according to tourists, is the most unusual. According to the idea of the creators, the tower can work as a fountain, from which chacha – the national Georgian alcoholic drink – pours. At first it was indeed so – until 2015, for 10-15 minutes, drinks from various Georgian producers were indeed poured from the Fountain of Chacha, but in 2022 the tower no longer functions in this way. Despite this, it continues to be a popular city landmark. Tourists recommend visiting it in the evening to enjoy the brightly lit view.

The sculpture “Ali and Nino”

Was created by the idea of the artist and sculptor Tamara Kvesitadze, inspired by the novel of the same name. The art object symbolizes the unity of Europe and Asia, as well as a deep understanding between people. The main feature of the sculpture is that from different angles it looks different. On the one hand, the two people are facing each other and striving towards each other, on the other, they have already embraced and merged into one. This is how the sculptor managed to realize the idea of connecting the two parts of the world.

In addition to the three largest objects, there are several other interesting monuments in Miracle Park in Batumi. First, this is the sculpture “Me, You and Batumi”. It reflects the coffee ritual – two Batumi residents drinking a hot drink together. The statue is made of bronze, and at the table, which is part of it, there is always room for a tourist who wants to take a photo. Secondly, within walking distance of the wheel in Wonderland Park, is the Batumi Lighthouse, built by French engineers in 1882.

Many locals have been known to use Wonderland Park as an area for biking or skateboarding. There are several lanes, and the asphalt in the area is smooth and clean. In addition, the Miracle Park in Batumi has a bicycle rental shop.

As you stroll through Wonderland Park, you are sure to get some suggestions for a water trip. There is a small pier within walking distance from the park, from which you can take a small water trip on a yacht or a boat. Such a point works from morning till evening, so you will definitely have time to visit it.

According to tourists, within walking distance from the Park of Miracles in Batumi there are several excellent cafes and restaurants, where after a long walk you can try national dishes and drinks. In addition, there are other parks nearby Miracle Park, such as Park 6 May and the local zoo Batumi City Zoo.

Park of Miracles in Batumi is located near the local waterfront. It is easy to get here from anywhere in the city. You can take buses number 1, 1A, 10, 10A, 15 going to the stop “Gogebashvili Street” or “Sea Port”. You can also take a cab – Yandex.Taxi, Uber and TAXI GEORGIA services will also be very convenient. Coordinates for navigator in a private car: 41.656323, 41.639898.