Palazzo Normanni and the Palatine Chapel 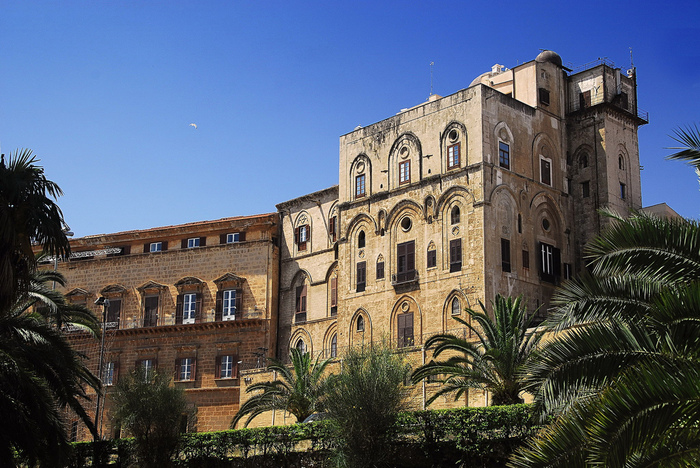 Palazzo Normanni, or as it is called in Italy – Palazzo Normanni is the former residence of the kings and viceroys of Sicily and is located on the outskirts of the historic city of Palermo. The most famous part of the palace, the Palatine Chapel, is now a museum and on some days visitors are allowed to enter the state rooms of the third floor of Palazzo Normanni. Visits on certain days are due to the fact that within the walls of the palace the parliament of the autonomous region of Sicily still sits.

Historically the first buildings on the site where Palazzo Normanni now stands, date back to the Phoenicians and were later fortified by the Romans. By the 9th century, the Arabs arrived and took over Palermo in 875, and on the site of the ancient buildings, by then dilapidated, was built a fortified palace known as the palace of the Emirs. Although the residence of the Emirs was in fact located elsewhere, in the center of Palermo, in what is now the modern quarter of Calça.

In 1072 Palermo was taken over by the Normans whose leader, Robert of Guiscard, made the Palace of the Emirs his residence. Under his nephew, Roger II, the former Arab fortress was transformed into a royal palace. At that time the palace acquired four towers, although only one has survived, the namesake of the famous Leaning Tower of Pisa, also called the Tower of St. Ninfa. 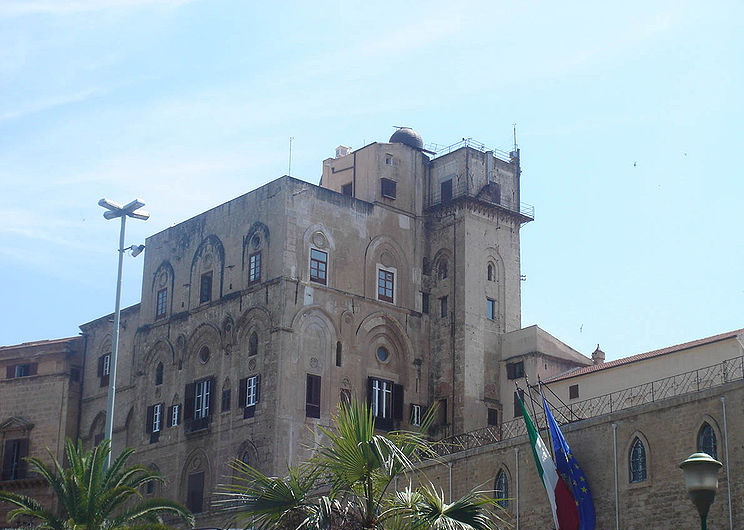 Palazzo Normanni and the Palatine Chapel

Under Roger II the Palatine Chapel, the private chapel of the kings, also appeared in the palace.

The heyday of the Norman palace was under the reign of Frederick II and Manfred II (both grandsons of Roger II). The palace became a center of cultural and political life, with a mint, a poetry school and even a weaving mill. After all, under the Arabs Sicily became famous throughout Europe for its fine fabrics, so the Normans tried not only to maintain but also to develop this skillful and highly prized in the Middle Ages handicrafts.

READ
Midlands, England - where to go and what to see

After the fall of the Hohenstaufen dynasty, Palermo was no longer considered the capital of the island and the palace accordingly lost its status as an imperial residence and became a mere fortress. This lasted until the 16th century, and over the years many of the palace’s historic interiors, created during the Otville and Hohenstaufen periods, were destroyed.

At the beginning of the 16th century, the Norman Palace became the residence of the Spanish viceroys of Sicily. Between the 16th and 17th centuries, the palace underwent a series of reconstructions, which resulted in it becoming both much wider and much more beautiful. Thus the elegant Fountain Court appeared in 1581-84 and at the turn of the 16th and 17th centuries a vast Maqueda Court was set up, named after the ruler of the time. 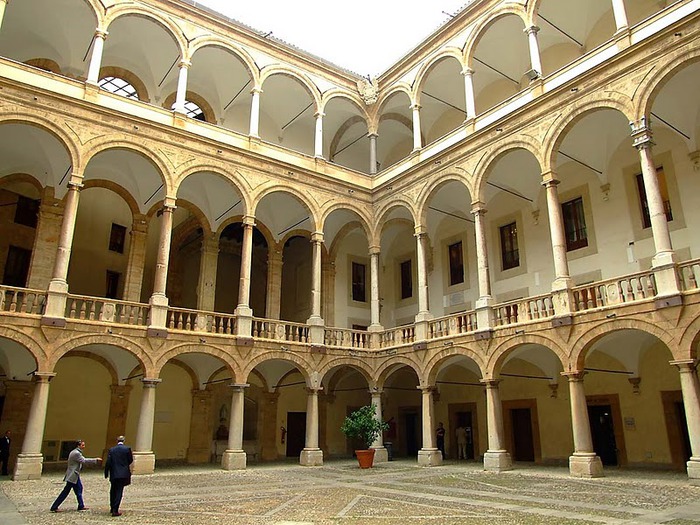 The northern wall of the Maqueda courtyard is also the southern façade of the Palatine Chapel. In 1616 the Viceroy Villeneuve had the façade of the palace remade, and so the main façade that now faces Piazza Victoria appeared. In 1735 Charles of Borbone had a monumental staircase built that led from the Maqueda courtyard right up to the royal suite on the third floor. 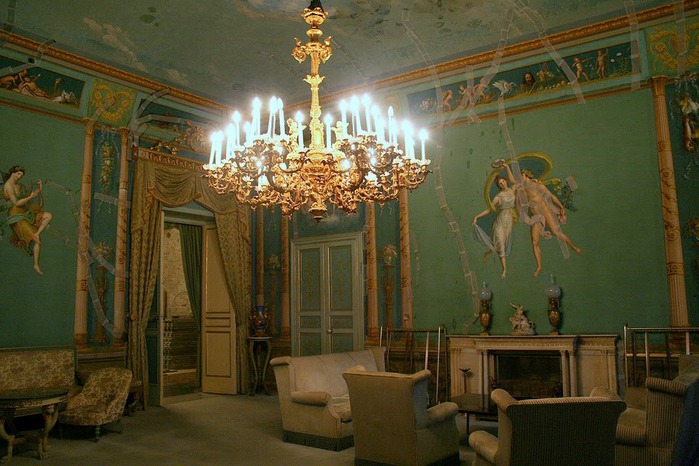 The western and southwestern facades of the Norman palace, on the other hand, have remained unchanged from their original appearance, obtained under the Arabs and Normans. Therefore, if you look at the palace from the side of the modern Piazza Independenza, it looks like a real fortress – strong walls, small windows and battlements. The only decoration of the palace on this side of the facade is the typical repetition of the Arab style pattern of false arches. 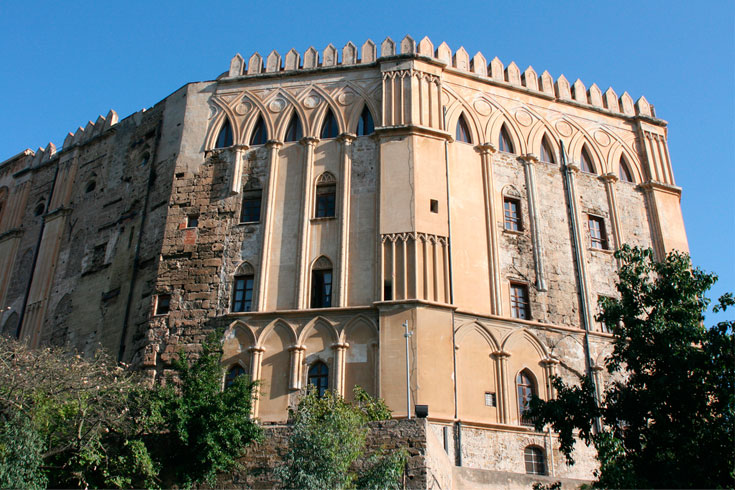 The architecture of the museum

The southeast façade of the palace faces Piazza Victoria, and is a typical Renaissance Italian palazzo. This is where the main entrances to Palermo’s modern government offices are located. The Regional Assembly chose Palazzo Normanni as the location for their meetings in 1947, it is because of their meetings that visitors do not always have free access to the palace premises.

READ
The Marvelous Lapland: How to visit Santa Claus and see the Northern Lights 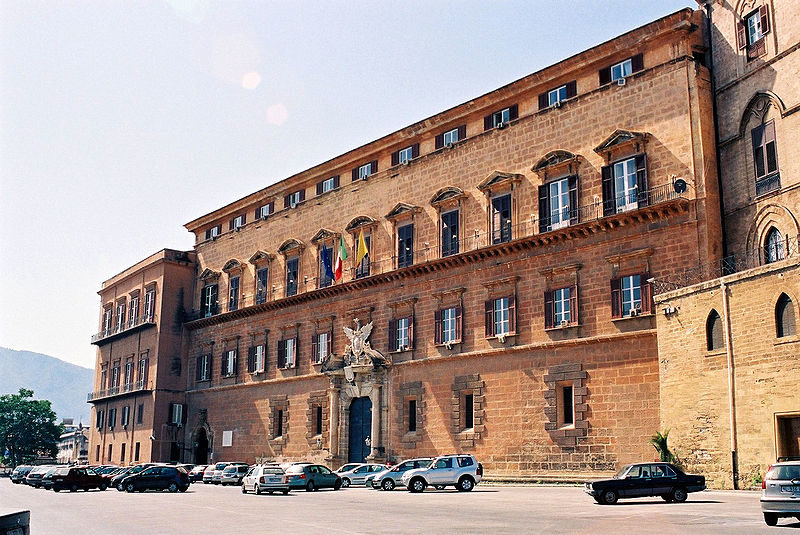 Entrance to the museum

But this does not apply at all to the most famous part of the palace, the Palatine Chapel or the Chapel of Saints Peter and Paul, here tourists can get in unimpeded, as there is a museum.

This three-nave basilica, created in the Norman age, has three apses. The space of the chapel is divided into naves by granite and marble columns with capitals, which are also the base for the lancet arches. It is noteworthy that the chapel has a dome, although this architectural element is not typical of the Arab-Norman style. 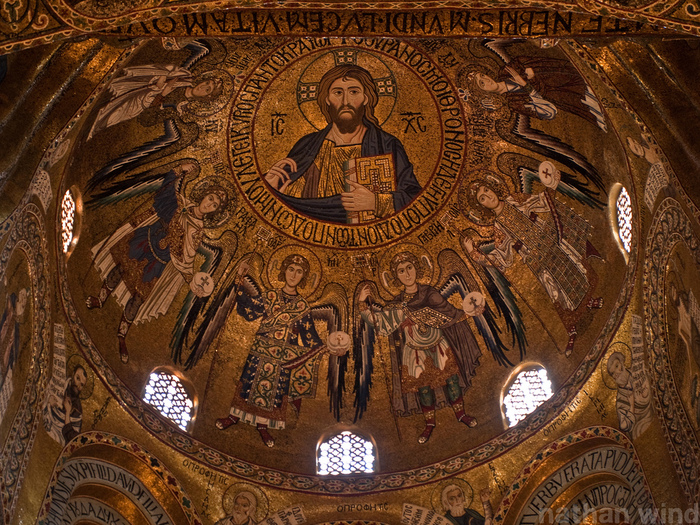 The dome, transept, and apses of the Palatine Chapel feature Byzantine mosaics, which are the best preserved in Sicily. The dome is covered with the earliest mosaics, which date back to 1143, and the ceiling is decorated with images on the theme of secular entertainment of the 12th century. The wooden ceiling with the honeycomb vault of the middle aisle and the ceilings of the side aisles are generously decorated with exquisite carvings, the sight of which immediately brings to mind the Arab style. The crypt of the chapel contains a small museum called the Treasury of the Palatine Chapel. An earthquake in Sicily in 2004 caused some damage to the building but by 2008 it was restored and once again welcomes tourists. 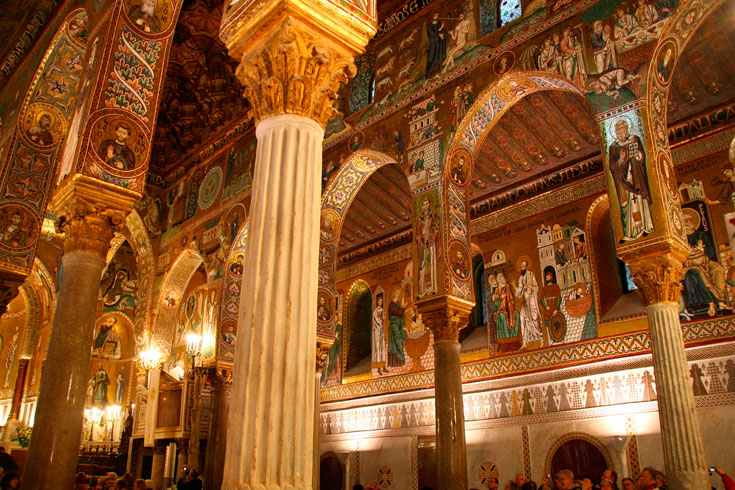