Louvre is one of the most famous attractions in Paris. The Louvre is known to tourists not primarily as a magnificent architectural monument, which was once home to French kings, but as the most famous museum of the world, which attracts art lovers from all over the world.

The museum has more than 400,000 exhibits, of which 35,000 are on display. The collections are divided into eight sections – Oriental Antiquities, Egyptian Antiquities, Greek, Etruscan and Roman, Islamic Art, Sculpture, Painting, Objects of Art and Graphic Art. The Denon Wing is the most visited part of the museum and houses a collection of Italian paintings, including the Mona Lisa.

Save on your trip!

Video: Walking around the Louvre

If you enter the Louvre through the main entrance (the Louvre Pyramid), you’ll have to wait in line for quite a while, but you can take advantage of that as well. While waiting you can enjoy a stunning view of Napoleon’s courtyard with its fountains and pyramids. You will also have time to see the Louvre from the outside, which is astonishing in its size.

Finally inside the museum, at the information desk you can get a plan of the Louvre, on which the most famous works of art are marked. It is better, of course, to prepare in advance and print out a guide from the museum website (http://www.louvre.fr/). On the site, under Visitor Trails, you can choose from 27 itineraries of varying lengths. The most popular, of course, is the Masterpieces route, which takes about an hour and a half.

Attempts to grasp the immensity and embrace the entire exposition of the Louvre invariably end in failure, because the collection of this museum is simply immense. Therefore it is necessary to think beforehand what works of art you want to see. The museum is divided into three wings (Richelieu, Denon and Sully), which include the following departments:

The most popular part of the museum is the Denon wing. It is here that most of the tourists rush, dreaming to have a glimpse of Leonardo da Vinci’s legendary “Gioconda”. In fact, the Mona Lisa can be seen only from the corner of your eye: the hall housing the most famous painting in the world is jammed at almost any time of the day. A huge crowd of art lovers line up in front of Leonardo’s masterpiece, holding a camera in their raised hands. And the Mona Lisa smiles mockingly at visitors from behind armored glass…

In addition, the Denon wing also houses a huge gallery of Italian paintings, the most famous works of French artists of the XIX century and a collection of Italian and classical sculptures.

Many will be interested in the Richelieu Wing, which on the third floor displays paintings of Western and Northern Europe. Here you can see the paintings of Durer and Vermeer. Hans Holbein the Younger and many other masters of painting. On the floor below is a stunning collection of applied art, including the famous Napoleon Hall, which amazes with its luxurious decorations.

The Sully Wing is especially attractive for those interested in the history of the Louvre.

Masterpieces of the Louvre

The Louvre was built at the end of the 12th century by King Philip-Auguste. At that time the Louvre was only a defensive fortress, but this structure has undergone changes century after century. Almost every king of France felt the need to make something new in the Louvre. So in the middle of the XVI century Francis I, who decided to make the Louvre his Parisian residence, ordered his court architect to build a palace in the Renaissance style, and at the end of the XVI century king Henry IV ordered to remove the remains of the medieval fortress, to expand the yard and to connect the Tuileries and the Louvre palaces.

In 1682 the royal court moved to Versailles and the Louvre fell into disrepair until the Great French Revolution. In 1750 even began to talk about the possible demolition of the palace.

New life was breathed into the Louvre by Napoleon, who resumed work on the construction of the Louvre. In addition, Napoleon has contributed enormously to the expansion of the collection of the museum, demanding from each nation he defeated a kind of tribute in the form of works of art. Now the catalog of the museum has about 380,000 items.

The Louvre is located in the heart of Paris, on the right bank of the Seine. Surely you have already heard about the huge lines that await you at the entrance to the museum, but do not be afraid of them. First of all it is better to use not the main entrance through the Pyramid, near which an incredible number of people are invariably crowded, but the entrance through the shopping center Carrousel du Louvre. You can get there directly through the Palais-Royal – Musée du Louvre subway station.

To avoid long lines at the entrance, you should either arrive about half an hour before the museum opening or in the afternoon when the flow of tourists has subsided a little. The museum is open from 9:00 to 18:00 on Monday, Thursday, Saturday and Sunday and from 9:00 to 21:45 on Wednesdays and Fridays. Tuesday is a day off .

Entrance fee to the Louvre is 12 euros. If you want to visit not only the permanent exhibition, but also the exhibitions and the Napoleon Hall, the ticket will cost you 13 euros.

The Louvre is one of the most famous museums in the world, located in the heart of the French capital, Paris. Every year, the Louvre attracts millions of tourists from all over the world. There are many unique works of famous artists, sculptures and historical items. 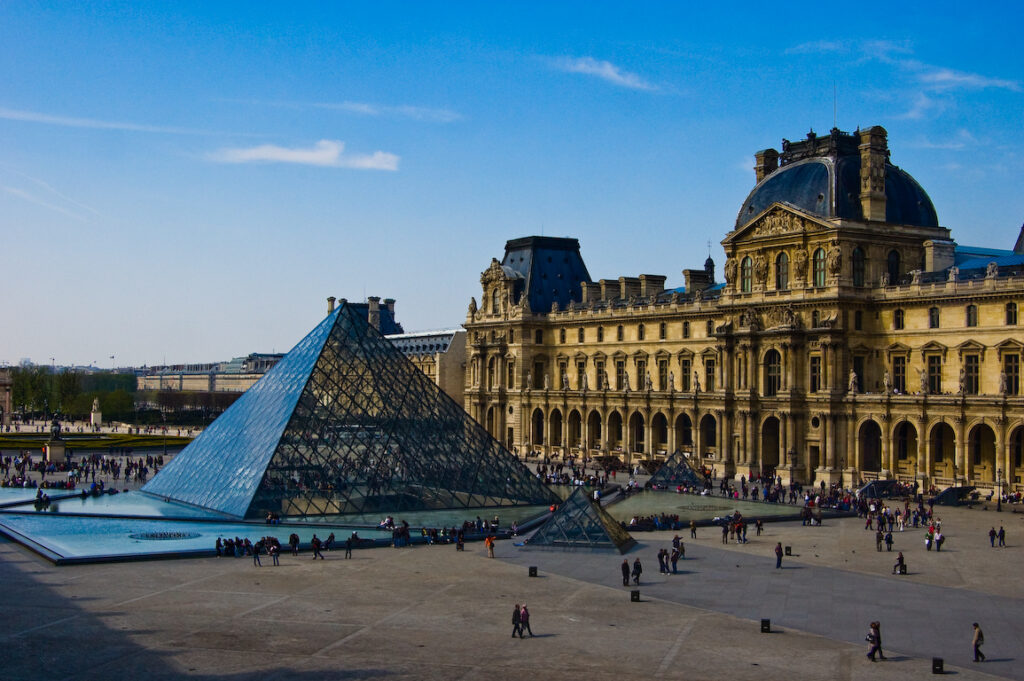 In 1190 King Philip-Auguste ordered the construction of a fortress that would protect Paris from enemy attacks, and later it turned into a luxurious palace. The construction lasted 20 years, the fortress turned out to be virtually indestructible, protected by ten towers, strong walls of 2.5 meters thick and a moat with water. At that time the Louvre housed the royal treasury, ammunition depot and prison. During the reign of Charles V, the royal residence was moved to the Louvre, and in the former castle appeared windows, front staircase, chimneys – the fortress became a residential building. The library was moved here from the king’s former residence.

Later, in 1528, when King Francis I was reigning, he ordered the demolition of the “ruin” and the construction of a new palace. And so each new ruler made adjustments to the interior and exterior of the palace. During the reign of Henry IV they tore down what was left of the medieval fortress, enlarged the inner courtyard and merged the Tuileries Palace and the Louvre. The Tuileries Palace was built in 1564 by order of Queen Catherine de Medici. In 1682 the royal residence moved to Versailles and work on the Louvre ceased, and for a long time the palace was abandoned. In 1750 there was already talk of its demolition, but the king still left it. 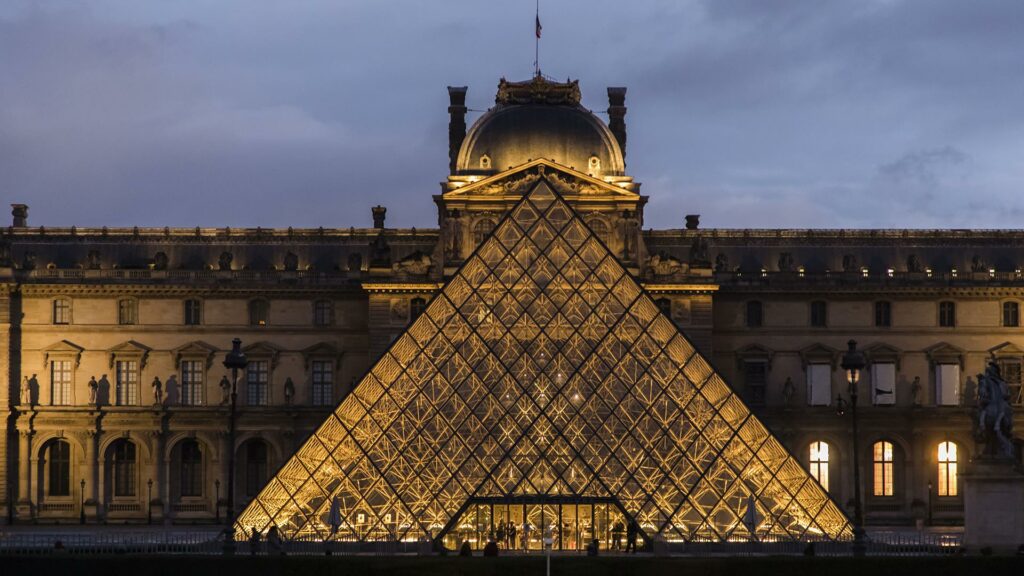 Reopening of the Louvre

During the reign of Louis XIV, the Louvre was rebuilt by tearing down the oldest structures and building new ones in their place. During this period the east colonnade was raised and new buildings were added. The king wished that the east wing looked the best, because that part of the Louvre could be seen not only by citizens of the city, but also by visitors to the capital. To finish the palace, he engaged the best architects and craftsmen. Fifty years later, since the appearance of the Louvre Gallery, began to form small workshops that produced a variety of furniture, chandeliers, and many other things.

In 1989, a glass pyramid was erected in front of the Louvre. The construction connects the old palace with the new and became the main entrance to the museum. Its height is 21 meters; two small pyramids are located near it, surrounded by a fountain. At night the glass pyramid is illuminated. 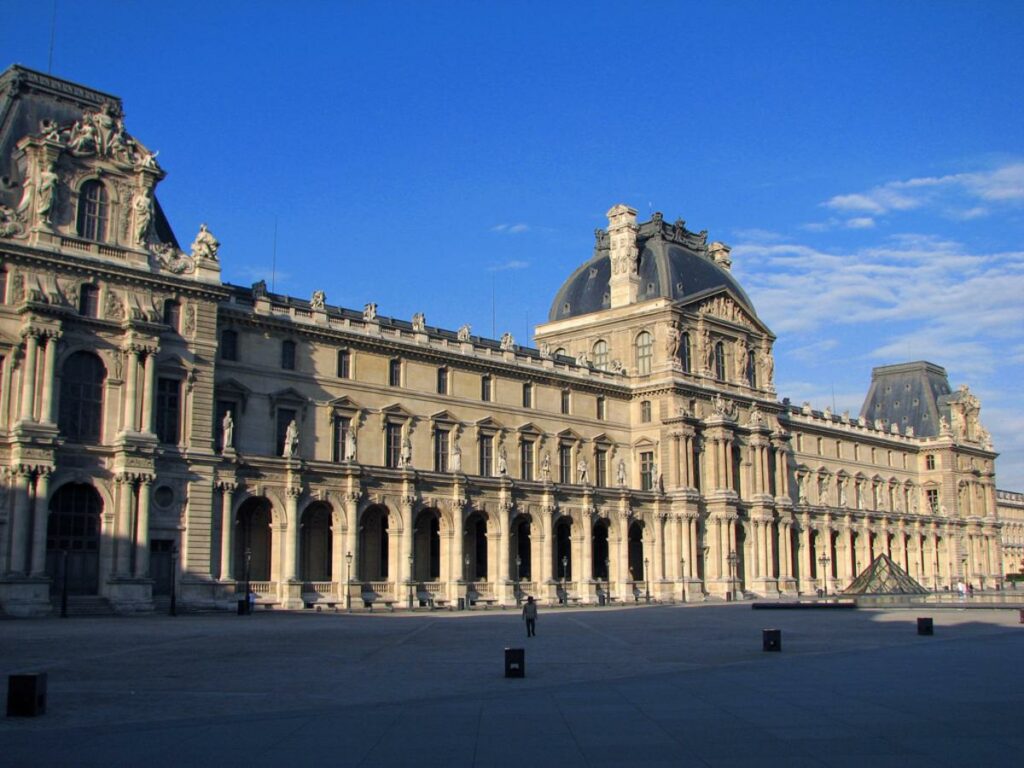 Reopening of the Louvre

Location and origin of the name

The Louvre is located in the heart of Paris, on the banks of the river Seine. The museum can be accessed from the Rue de Rivoli, which leads through the famous glass pyramid, or through the underground passage of the metro station, where the tourist immediately enters the museum grounds in the Hall of Napoleon. Louvre is located on the territory of 195 thousand square meters, is divided into two parts – Old and New.

Historians have not yet come to one opinion regarding the name of the palace. Some suppose that it comes from “leovar”, which is translated from the Saxon word for “fortification”. Others believe that the name comes from the French word “louve”, which means “she-wolf”, because on this site was located a royal kennel, where dogs were trained to hunt wolves. 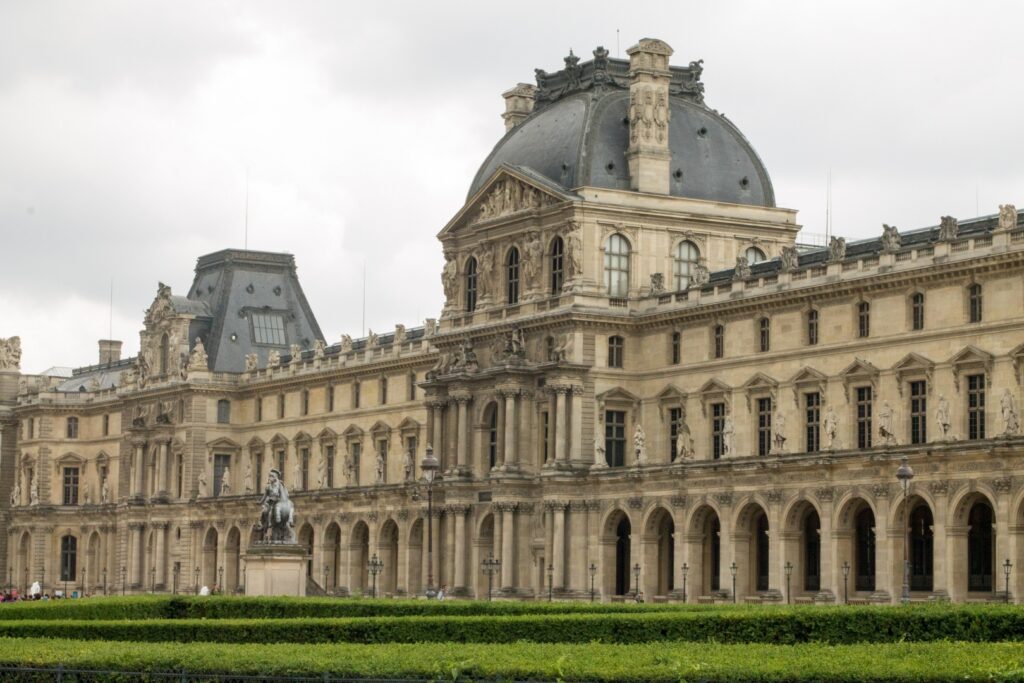 Location and origin of the name

Over time, the most valuable paintings from the royal collection and sculptures from the Museum of French Sculpture were transferred to the museum’s collection. The collection was also greatly enriched during the Napoleonic wars by archaeological finds and spoils of war.

Currently, the Louvre has many halls, where objects of art and life of all times and peoples are collected, they count about 400 thousand copies. It is here that the most famous works of art in the world are kept, such masterpieces as: “Leonardo da Vinci’s La Gioconda, Michelangelo’s The Venus of Milos, Michelangelo’s The Slaves, and many others, including works of French painting. Also in the museum are collected interior items, vases, sculptures from different eras. In addition to valuable expositions in the Louvre, there is a high school, a laboratory, a lot of circles for children and adults, sales area, where are more than fifty stores of various kinds.

In 2004 the government of France decided to build satellite museums of the Louvre, the halls in the palace were overcrowded and the number of people wishing to see the famous works has increased. Louvre is so great that it is simply impossible to walk around all its magnificent rooms in one day, so art lovers, once visited here, always come back to explore the museum from a new side.