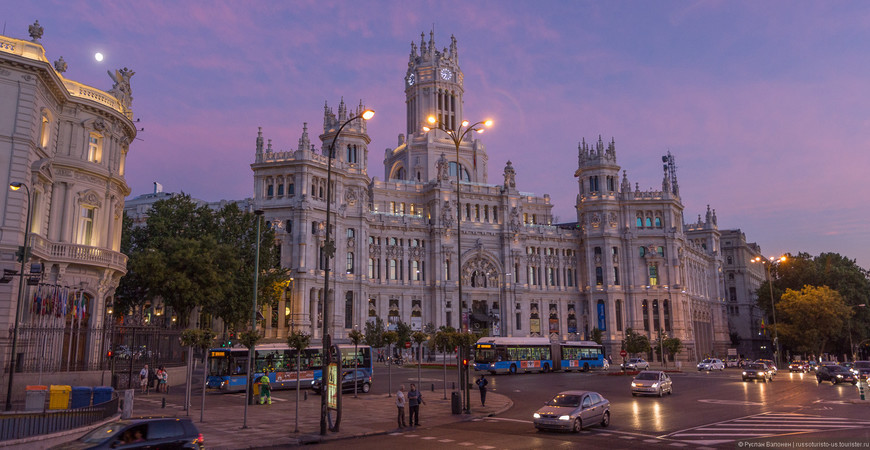 Entrance to the building is free. Observation deck: 3 euro for a standard ticket, 2.25 euro for a reduced ticket (children up to 14 years, seniors, disabled). Free entrance – on public holidays: May 2 and 15, November 9.

In the center of the city, on the most beautiful square of the Spanish capital, Place Cibeles, there are 4 architectural masterpieces. Among them, especially stands out the snow-white building – the palace of Cibeles. Other buildings that make up the architectural ensemble of the square: the building of the Main Bank of Spain, Buenavista Palace (headquarters of the Army of the Kingdom of Spain) and Linares Palace (cultural center of the Americas).

The palace got its present name in 2011. Previously it was called as the Palace of Telecommunications. The building is made in the Neo-Hurigueresque style, a Spanish version of late Baroque, which is characterized by the abundance of various decorative elements. During its long existence, the palace has undergone some changes. During the last reconstruction, the façade was restored and a glass dome was built over the former parking lot.

The Sibeles Palace was built in 1918, 13 years after work began. The authors of the project were engineer Angel Sainz Chueca and architects Antonio Palacios and Joaquin Otamendi. After the construction of the building, the architects became incredibly popular – they later designed other facilities in the Spanish capital (the Bilbao and San Sebastian bridges).

The building was called Nuestra Señora de las Comunicaciones (Palace of Telecommunications). At that time, the main offices of the telegraph, postal and telephone services were located there. Then the headquarters of the Universal Postal Union moved here.

In 1993, the Palace received the status of the cultural heritage of the country. Since then, the building has been converted into a multifunctional center. During the many years of reconstruction involving many renowned architects, the inner rooms were rebuilt in order to open them to the public. The inauguration took place in November 2009, but the finishing work continued for two more years.

What to see in the palace

Today the Cibeles Palace is a popular city venue for cultural and scientific events. Cultural and entertainment events are regularly held in the building. Inside the palace, the Baroque stucco and the high-tech solutions are in amazing harmony.

The multifunctional center building is divided into sections according to its purpose. Together with the offices of city officials, there are: exhibition spaces with exhibitions, a recreation area with free Wi-Fi and comfortable sofas, coffee houses and a luxury restaurant, a reading room, an observation deck and souvenir departments for tourists. The exhibition halls are open daily, from 10 a.m. to 8 p.m. Admission is free.

At the entrance to the palace, all visitors pass through a system of control, like at the airport. Some people are intimidated by this procedure, but the security measures are taken due to the fact that the building houses state institutions.

Inside the Cibeles Palace: panoramic view (walk through the floors available)

Entrance fee: 3 euro for a standard ticket, 2.25 euro for a reduced ticket (children up to 14 years, pensioners and disabled), children under 2 years – 1 euro. Free entry – on public holidays: May 2 and 15, November 9. Tickets are sold at special ticket offices at the entrance to the building or on the official website of the Cultural Center of Cibeles Palace. If you buy online, there is a 0.5 euro fee. On weekends, it’s best to arrive before opening time, as lines are already forming at the entrance from 11am.

At the palace is one of the most beautiful fountain compositions of the Spanish capital. The fountain was built in 1782. Fountain Cibeles in the town square was planned as a place for walks and recreation for the inhabitants of Madrid. The composition depicts the goddess Cybele (she is the embodiment of Mother Nature), who rides a chariot drawn by two lions. The different parts of the fountain were executed by different sculptors: Roberto Michel for the lions; Francisco Gutiérrez for Quibela in her chariot; and Miguel Jimenez for the rest of the decoration of the fountain composition. The figures of the animals and the goddess were made of marble imported from Montesqueros.

How to get to the Cibeles Palace in Madrid

The plaza, palace and fountain of Cibeles are located in the historic center of the city. A visit to the landmark fits perfectly into most walking routes through the historic part of Madrid.

The nearest metro station, Banco de España (red line), is 250 meters away. Once out of the subway, you need to cross the Plaza Cibeles with the fountain – the palace is across the street.

In front of the Cibeles Palace there is a stop of land transport “Cibeles”. Buses 14, 27, 34, 37, 45, 203, E1, N2 and N3 run to the stop. You can find out the schedule in the mobile application Consorcio de Regional de Transportes de Madrid (available in the App Store and Google Play).

You can order a cab in Madrid through mobile applications: MyTaxi, Uber, Cabify, TaxiMadrid.