How to get from London to Cambridge

The city of Cambridge didn’t fit into our week-long program in London, but after totally blowing me away with Oxford, I wondered if Cambridge was as good as it was.

I could not stand it, and on the penultimate day of our trip I went to find out which was better: Cambridge or Oxford.

How to get from London to Cambridge

Cambridge is about 100 km north-east of London.

The best way to get to Cambridge is by train.

Timetables and prices can be found at http://www.nationalrail.co.uk/. 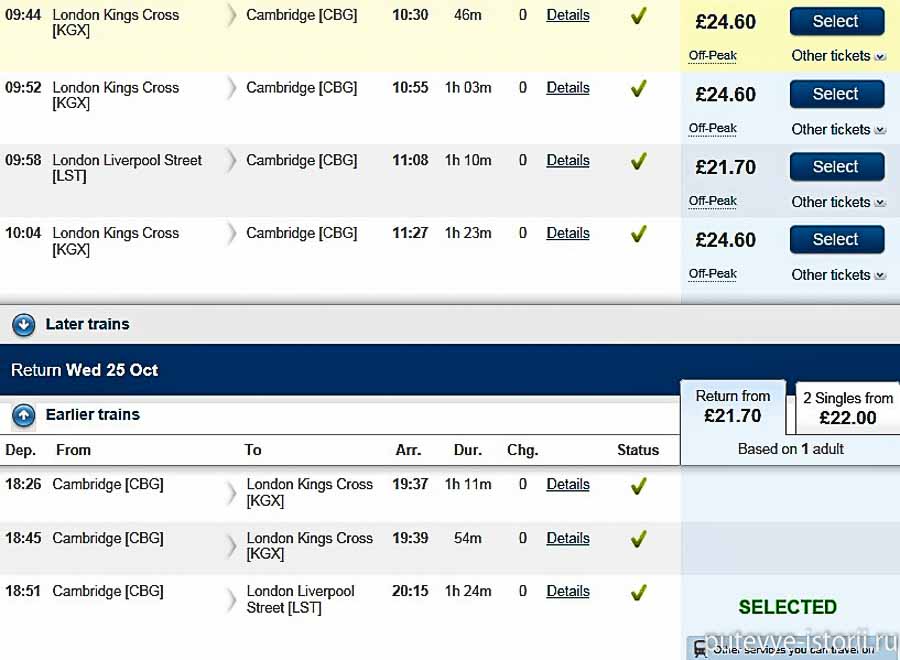 The journey time is between 45 minutes and an hour or more. From London Liverpool Street station the trains leave less often, but the ticket is a little cheaper.

Since our hotel was within walking distance of King’s Cross, that’s where I went. 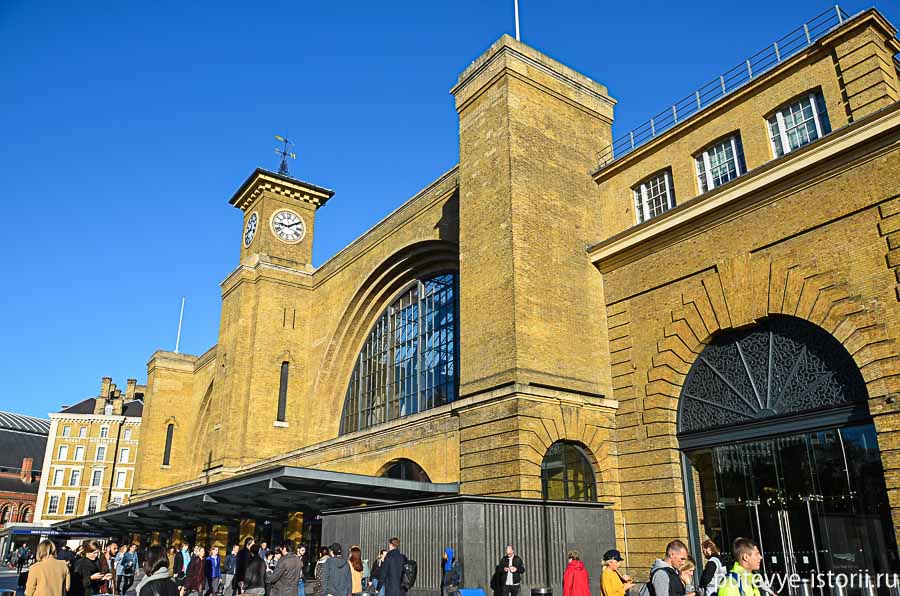 The best way to get from London to Cambridge is by train at 9-44, which takes 45 minutes to Cambridge. The train back is the 6-45 train, also fast.

The thing is, in England, the ticket price depends on the departure and return times – it’s more expensive to go during rush hours, and the difference is tangible. Rush hour ends at 9:30 in the morning and 6:30 in the evening. My London-Cambridge Off-Peak Day Return ticket cost 24.60. If I had taken the 9am ticket, I would have paid £36.

Another way to save money is to buy your tickets in advance. I recommend monitoring nationalrail.co.uk at least a couple of weeks before you travel – there are very good deals, even at peak times.

There are two types of machines at the station: for buying a ticket and for printing booked tickets, and there are even more of the latter. To print booked tickets, you have to enter the reservation code in the machine and insert the card you used to pay for the ticket. On the machine there is also a website where you can book and buy a ticket https://www.virgintrainseastcoast.com/. 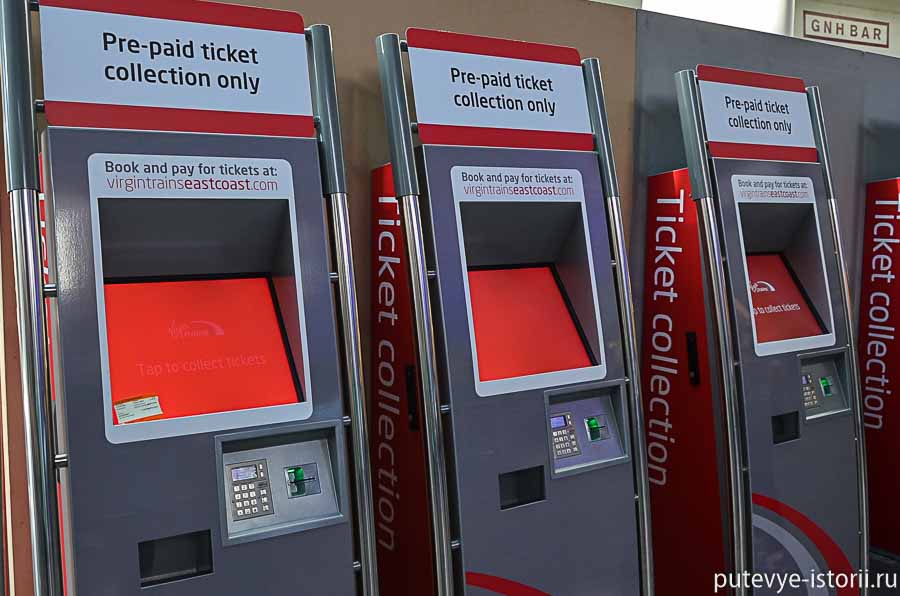 If you have not booked tickets in advance, you simply buy them. That said, if you don’t like the price of the ticket very much, try playing with the departure time – sometimes even minutes matter. 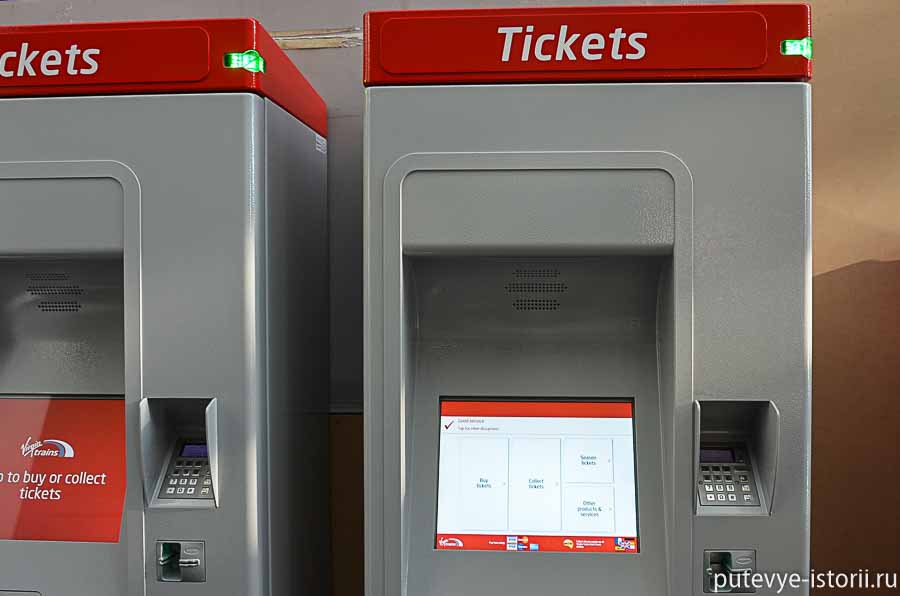 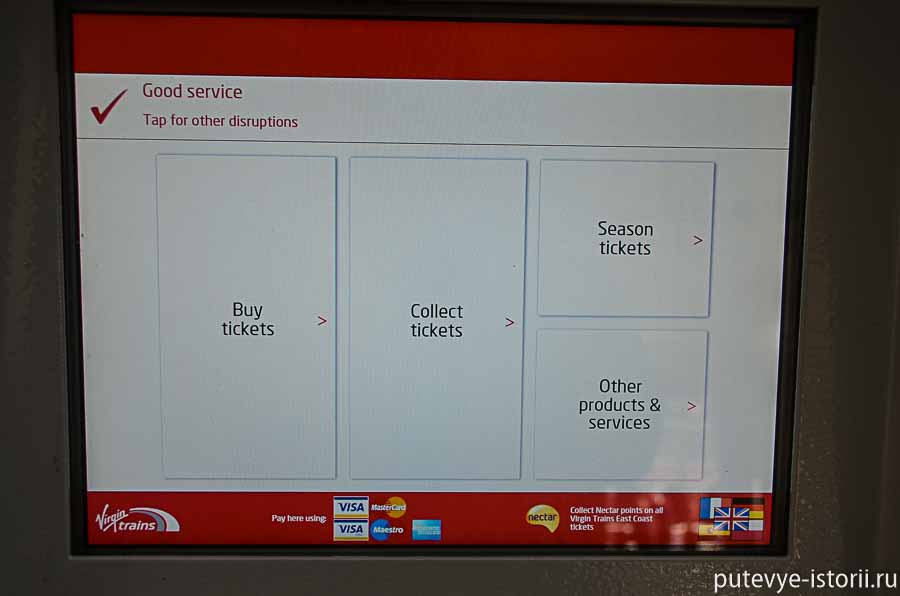 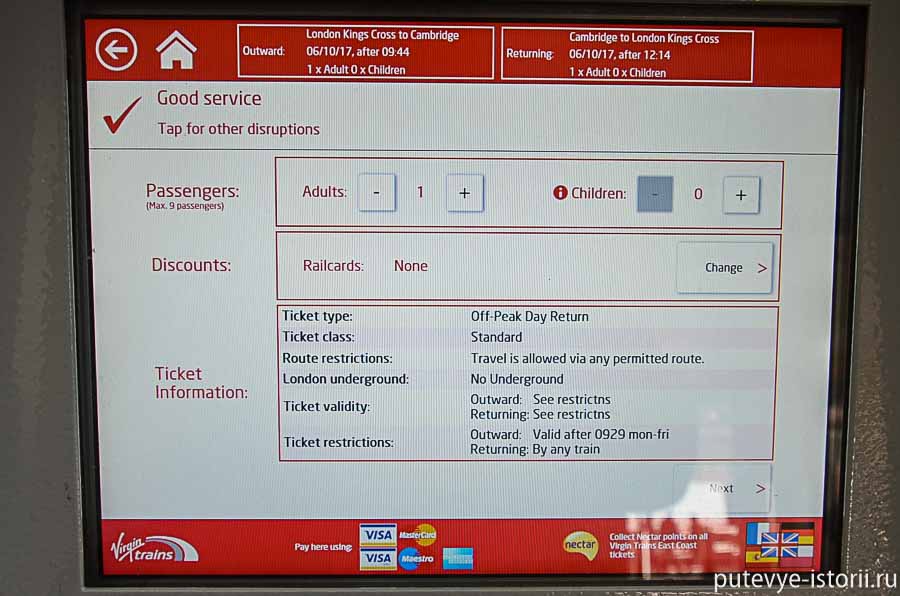 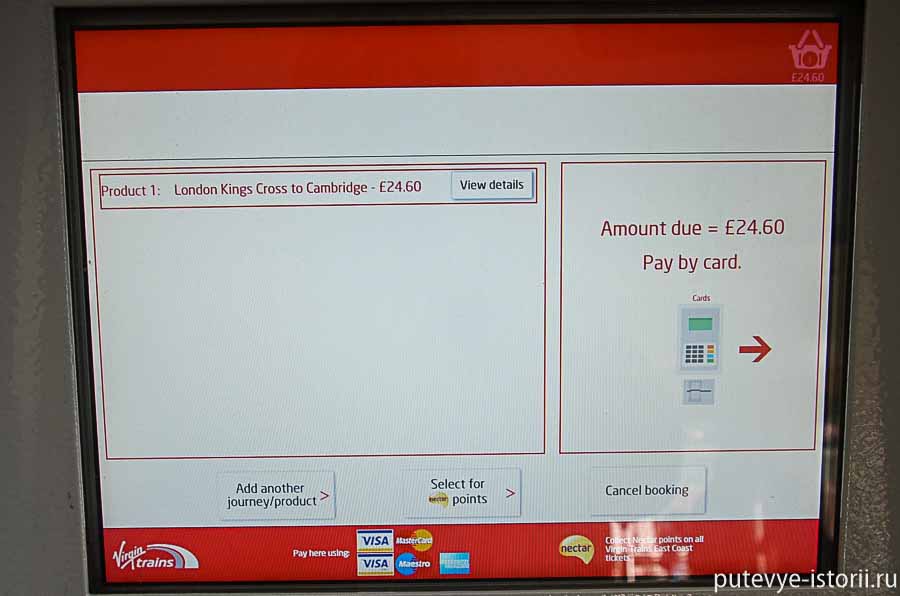 The machine will print four tickets, two with a QR code and two without. All of them are needed for something. 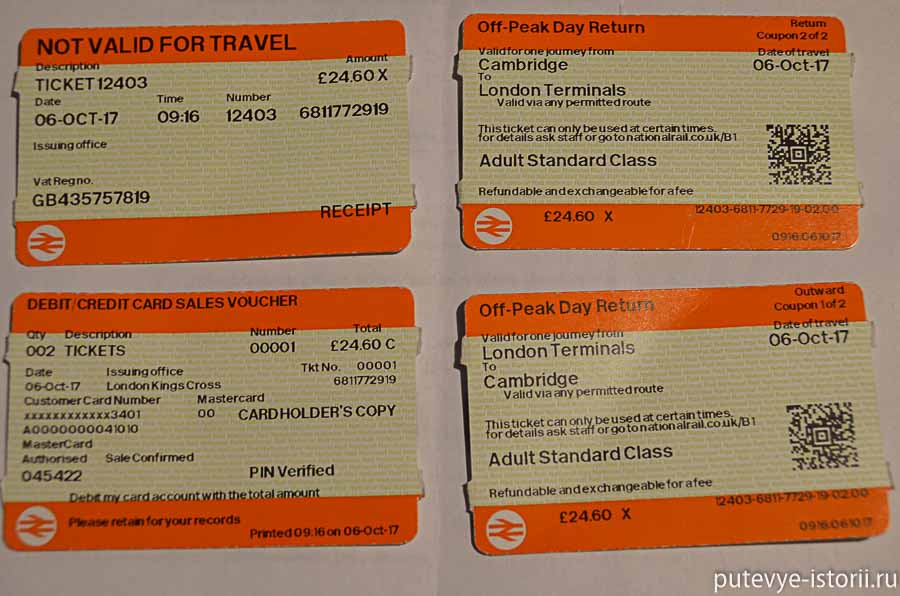 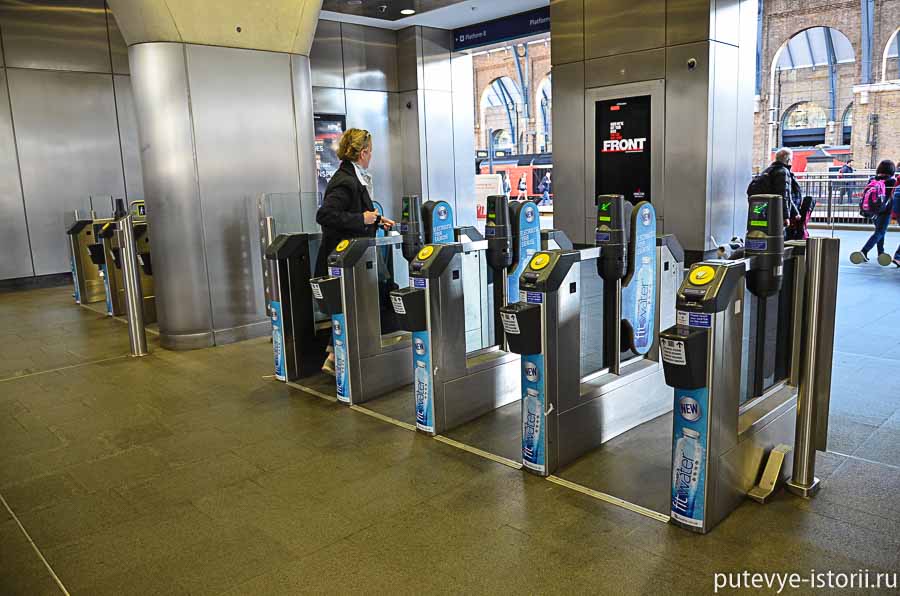 Anyway, I ended up walking up to the clerk, fanning my entire set of tickets, and he showed me the right one. On the way back I did the same thing – approached the clerk.

By the way, and buy a ticket at the station you can not in the machine, but at the ticket office, from a live person. In any case, come to the station in advance, so you’ll have time and the machine to deal with calmly, and in case of what what to refer to the cashier.

After buying tickets, all you have to do is wait for your train and platform number to appear on the scoreboard. If you have an Off Peak ticket, it doesn’t mean you have to go through the turnstile only after 9-30. When I got on my train at 9:30, it turned out to be more than half full (mostly Chinese) who came early. Tickets with no seats, the first train after 9-30 is popular, in our carriage all the seats were occupied, and a few people were even standing.

The train went quickly through London and raced non-stop, with such speed that sometimes even my ears hurt. Forty-five minutes later we were in Cambridge. 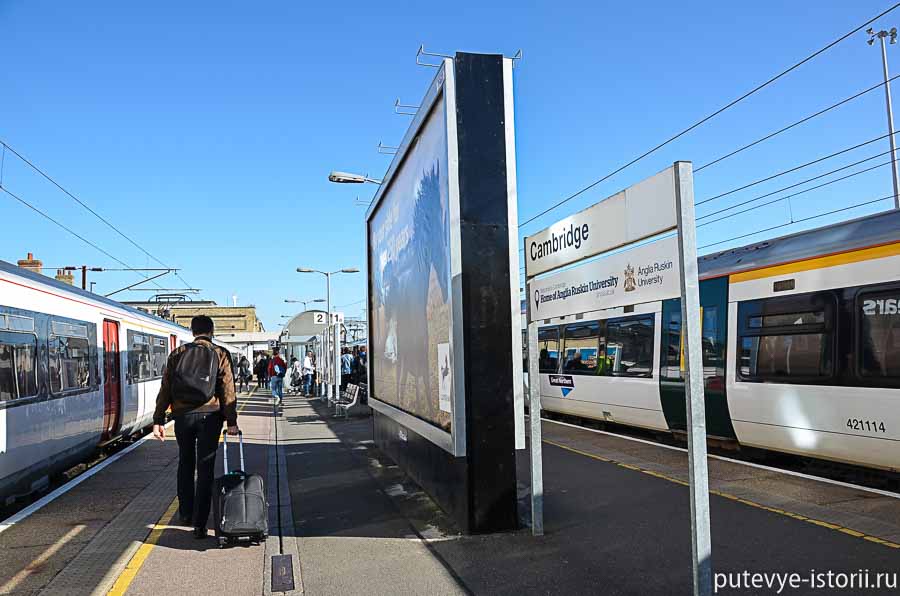 At the station there was a sign for the historic center, “City center 17 min”. 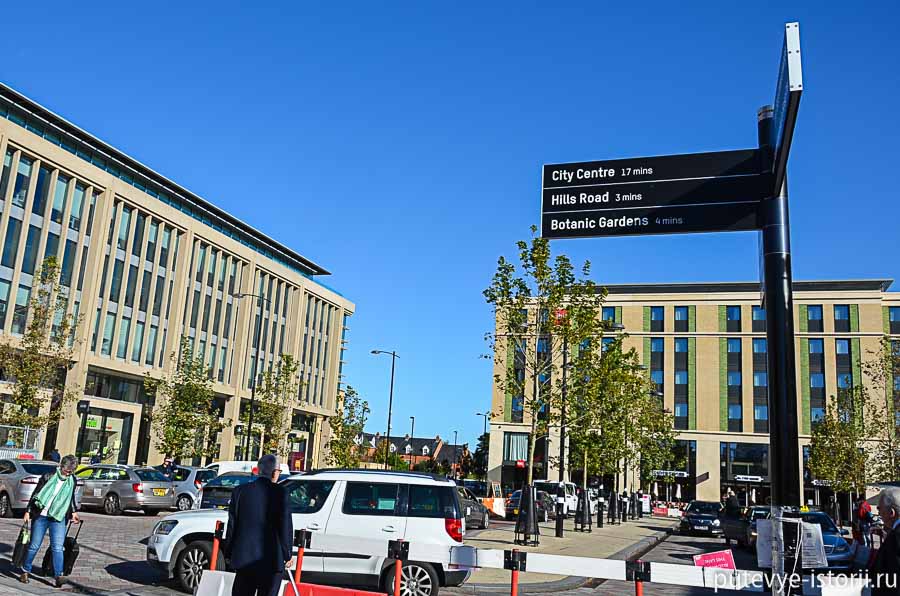 Really, I walked briskly to the center in a quarter of an hour, following the signs and referring to the map on maps.me.

I have a separate story to tell about Cambridge.

In the evening I returned from Cambridge to London to King’s Cross station, too. 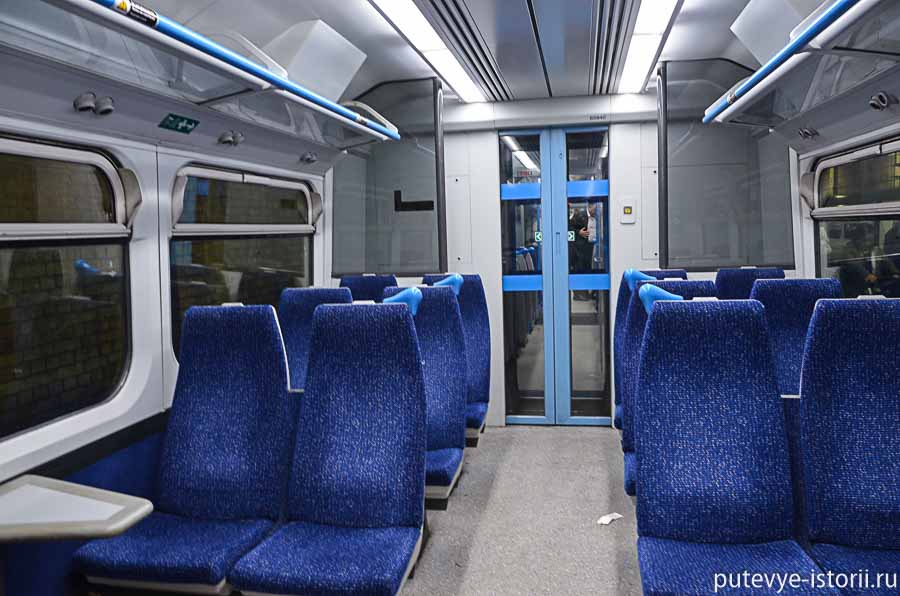 The station is remarkable, with a purple futuristic mushroom roof. 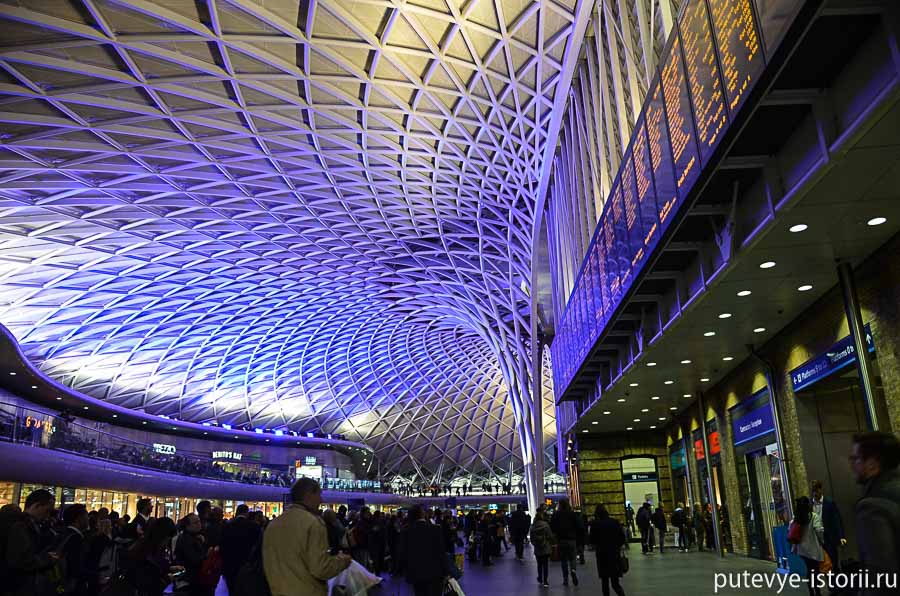 By the way, King’s Cross Station is the entrance to the very Platform 9¾ from which Harry Potter set off for Hogwarts. The entrance is marked by a luggage cart halfway up the wall. 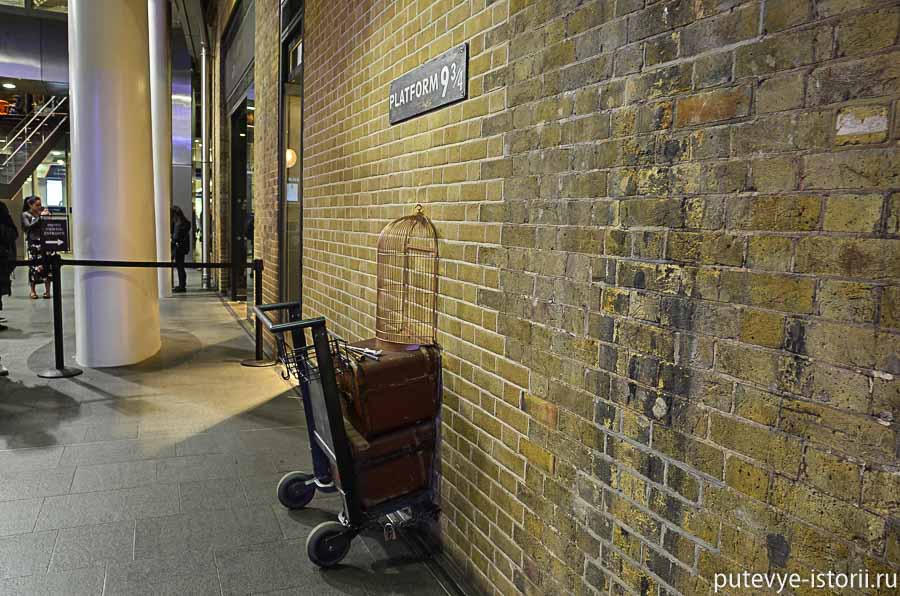 I arrived on Platform 8, so I immediately stumbled upon this new London landmark, which turned out to be very popular.

There is a queue (it was about half an hour in the evening) of people who want to be photographed, and there is even a service worker – a girl who gives each new photographer a magic wand, ties a scarf and holds the end of the scarf so that in the photo it looks like the scarf is fluttering. 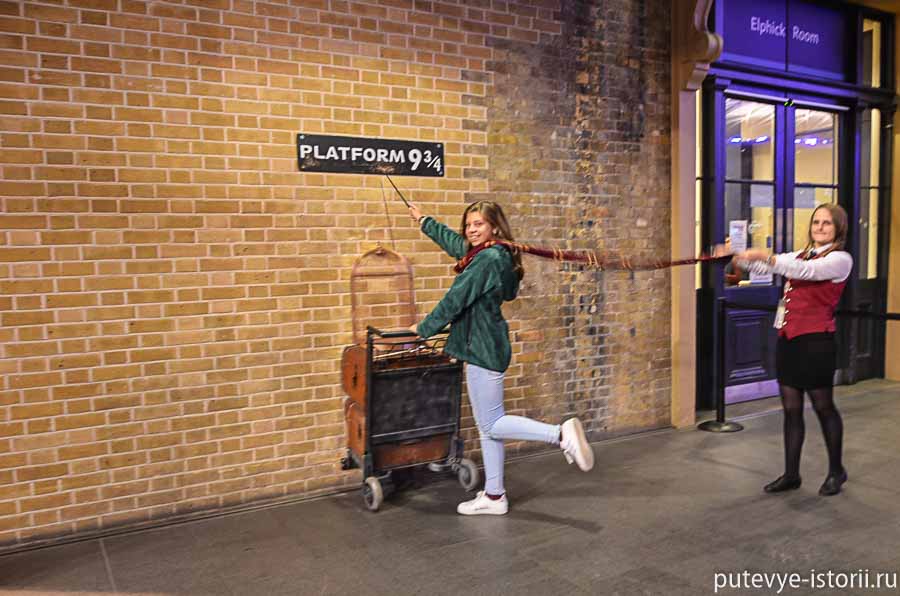 Looking back on the day I spent in Cambridge, I’ve been to a fabulous institution myself. So, that’s right, I confirm: from King’s Cross Station, trains leave for a magical land. Named Cambridge. 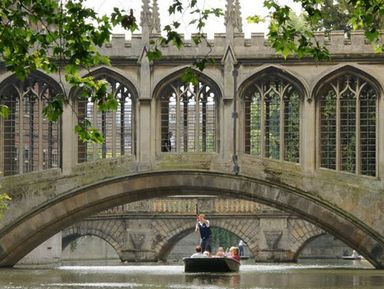 Many thanks to Bogdan for a wonderful tour of Cambridge. Bogdan has a wealth of knowledge and the ability to interest everyone, regardless of age. He is a patient and attentive guide, sensitive to the interests and wishes of clients. We, three adults and one teenager, got a vivid picture of this one of the oldest university cities, which gave the world so many great scientists. We recommend Bogdan’s guide to everyone.

The tour of Cambridge with Bogdan’s guide was enjoyable. Bogdan gave the impression of an erudite guide, who knew a lot not only about the history of the development and formation of Cambridge, but also about the British educational system, science, literature, way of life, etc. Thus, the tour was very informative and interesting.

READ
Belgium: interesting facts about a country with a rich history

The tour is more atmospheric than informative: Bogdan is a wonderful guide, we had a lot of fun, but Oxford itself “has limitations” in content.

Wonderful excursion! Thank you very much Bogdan. Despite the fact that the 4 hour walk through the cobblestone streets terrified us, everything went in one breath. Informative, exciting. Now Cambridge for us is not just a point on the map, but a whole collection of memories, associations and wonderful emotions. Thank you.

It’s been a month since our tour with Bogdan in Cambridge. Bogdan is a wonderful storyteller, he filled the tour with interesting facts about Cambridge life that you would struggle to find on your own. He is a very correct, intelligent and attentive guide. Feel free to contact Bogdan, you will be satisfied. Thanks again!

Thank you, Bogdan was a very interesting guide and helped us a lot with the transfers. It would be possible to recommend: – include short visits to souvenir shops, for example, at the end of the tour – include an optional dinner at a restaurant. I think you would also benefit from that. )) Thanks again!

I have lived in London since 2010, professional literary historian (PhD). I am engaged in tours since 2015, during this time spent 1100+ excursions and met not less than 8000 travelers, join you too:) All tours – with illustrations, absolutely author’s, with a lot of personal impressions received during the life in the capital.

My name is Julia, I am an art historian and art consultant by education, a graduate of the University of Birmingham, a member of the British Association of Art Dealers and Antiquarians (BADA), and a member of the Association of Art Historians (AIS). As a student I discovered the beauty of being a tour guide: the ability to tell an attentive audience about what you love most. I created my own tours, collected all the most important things in them and added a personal touch. My tours have resonated widely in the hearts of travelers, and today I have assembled a team of guides – historians and art historians – who I have taught everything I know myself. We are all genuinely in love with London and our profession, so each of our tours is not just a story about the history and culture of the city, but also an inside view of the city through the eyes of a local.

We make useful and affordable sightseeing tours in major cities around the world. Programs are designed so that you learn the most important things from history, discover unusual places loved by locals, and walk around the city on your own with much more interest after the tour. Our tours are led only by the best guides after special training. We work in Rome, Paris, Lisbon, Budapest, London, Barcelona and everywhere else!

My name is Lera. I once left my job in the London Financial City and decided to follow my dream – tea. I have been in the tea business for several years now and have studied tea making with Chinese professionals in both England and China. I am also a member of a tea school and community in Taiwan. I am a tea expert and often participate in various tea projects in different countries. In addition to historical and tasting tea tours in London, I also do tea and meditation. My personal tea journey was recently filmed for a commercial for Chinese airlines, and this short video captures the essence of what I do very well. https://www.youtube.com/watch?v=3_ElbIh6pJE I’ve been in London since 1997. I travel a lot and know as no one else how important it is to find “your” guide in a big city. That’s why I decided to combine my love of tea and London. I know the unique places in London where the history and the aroma of this magic drink is present in every stone, every brick. In a friendly format, I invite you to share this experience with me.

I am a young and energetic guide, I am the lucky owner of the “Blue Badge” (the highest qualification of a guide). My motto is “I find common ground with everyone!” I have many years of experience working with people of different ages and social groups, a higher historical and pedagogical education and 8 years of experience working with children. Let me share with you my love for the UK and London, this unique and dynamic city!