Top of the sparsely populated beaches in Odessa and the region

In Odessa and the region there are a huge number of beaches where you can sunbathe and swim in the sea, but few people know about the beaches where there is no noise abundance of tourists. In cooperation with the Odessa city council, we prepared for you not a ten, but almost, little-known beaches of the city and its suburbs.

At the very bottom – all places marked on the map!

On the outskirts of Odessa is located the beach Zolotoy Bereg. Its embankment has been recently repaired, and now it attracts vacationers with bright greenery and flowerbeds. This is one of the cleanest and well-equipped beaches in Odessa. Volleyball fans gather here on the courts, which are available to everyone.

Monastery (or Popovsky) beach is located near the monastery and children’s sanatorium “Green Hill” behind the Cape “Big Fountain” in Odessa. The beach is very popular with fishermen – in the water are concrete structures to protect them from the waves from which it is convenient to catch fish. A lot of space for tourists, a cozy family beach, equipped with toilets and cabins for changing. Also this beach is known for its 2-tier wave-cutting, thanks to which the water here is very calm and smooth, almost completely transparent. 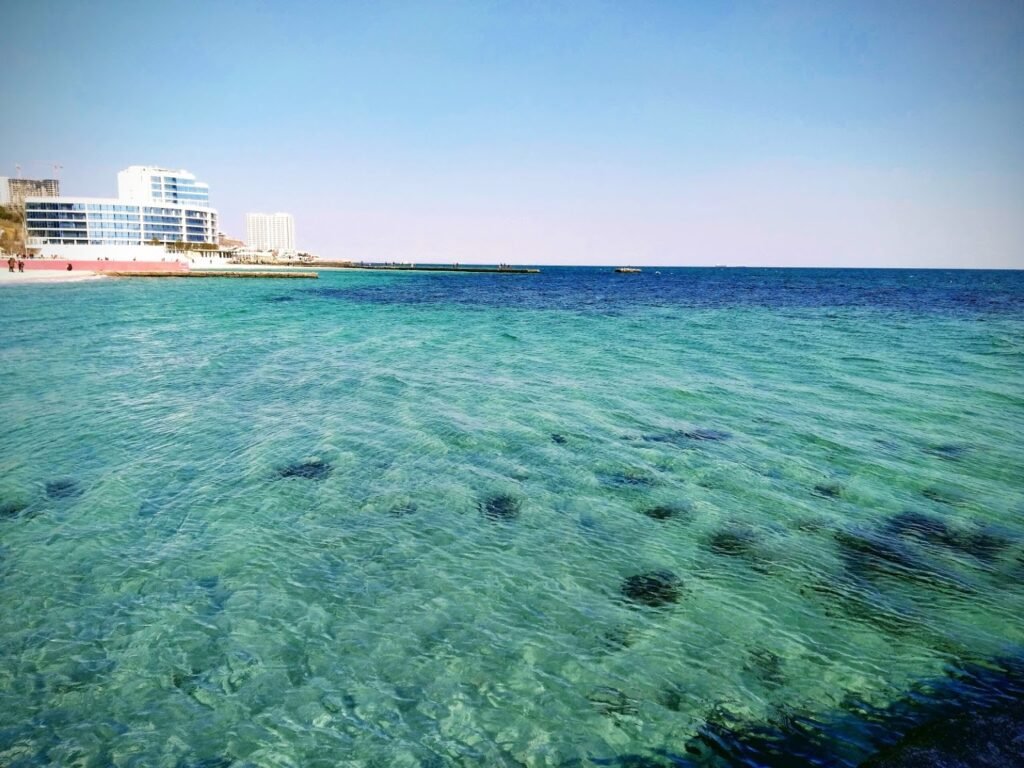 Although it is a small beach at the 10th station of the Great Fountain, but usually not very crowded. Its main feature is an unusual pier with a pond inside. This beach is located under the very slopes, on which the villas and new buildings are located, so “Chaika” resembles the beaches in Miami. The beach has excellent infrastructure, park area, there is a comfortable gentle descent to the sea. 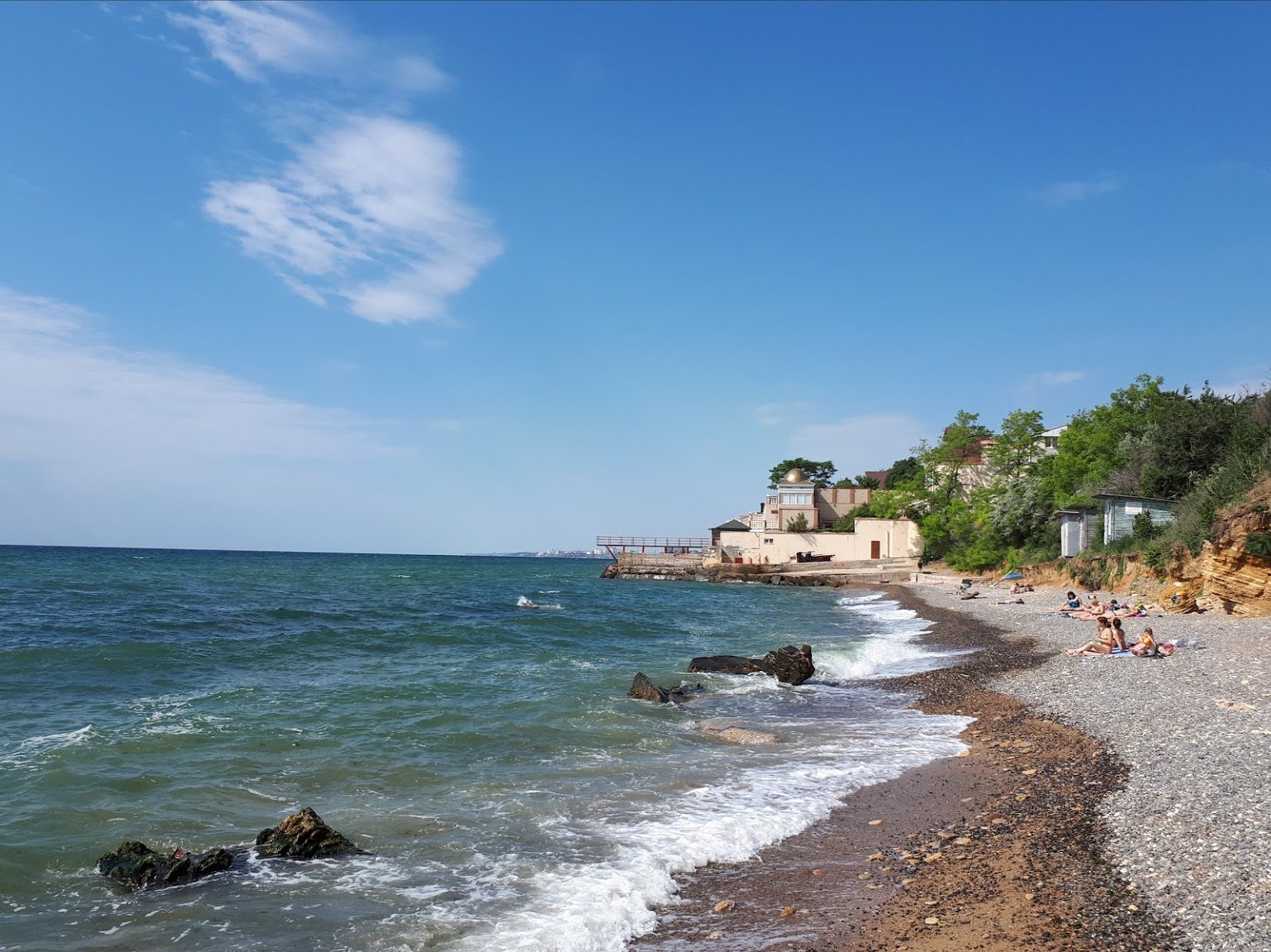 This beach is not very suitable for sunbathing and recreation with children, as it is quite uncomfortable to rest on pebbles. However, despite this drawback, this beach has many advantages: it is often deserted, the water is almost crystal clear and there are no noisy establishments nearby. This place is very popular for beautiful photos on social media and a secluded evening of lovers.

Fontanka is one of the largest villages on the Black Sea coast, located only 12 kilometers from Odessa. Beaches in Fontanka are oriented on the lovers of quiet and peaceful rest on the Black Sea coast, away from the city noise and bustle. Here you can stay with tents, listen to the sea breeze at night and in the morning to meet a wonderful sunrise.

Here the atmosphere is quiet and peaceful, and the air smells of the sea, pine, flowers and berries. First a walk in the forest, and then relax in the sun on the hot sand and swim in the clear water – all this you can do at this beach. Small waterfalls, small coves, giant boulders, streams, clear sea – everything you need for a perfect time.

Along with the wild beaches of Fontanka and “Leska”, there is a well-equipped elite beach “Zanzibar”. Although the beach “Zanzibar” has received the world mark of quality “Blue Flag”, the prices here are very reasonable. In 2019, “Zanzibar” was named the cleanest. “Zanzibar” has a narrow and long shoreline, and the coastline is fortified with slabs of concrete. There are large rocks at which vacationers take pictures.

Sanzheika is a small village on the Black Sea coast, only 30 kilometers from Odessa.

Sanjayka attracts vacationers with its large bluffs and seascapes, which have already become a very popular place for photos on Instagram. Indeed, it is one of the most attractive beaches to meet the sunrise, which will brighten up your experience this summer!

Despite the fact that Sanjeyka is located almost next to Odessa – it is quite quiet, at times even deserted, thanks to the long beaches with clean sand and water. 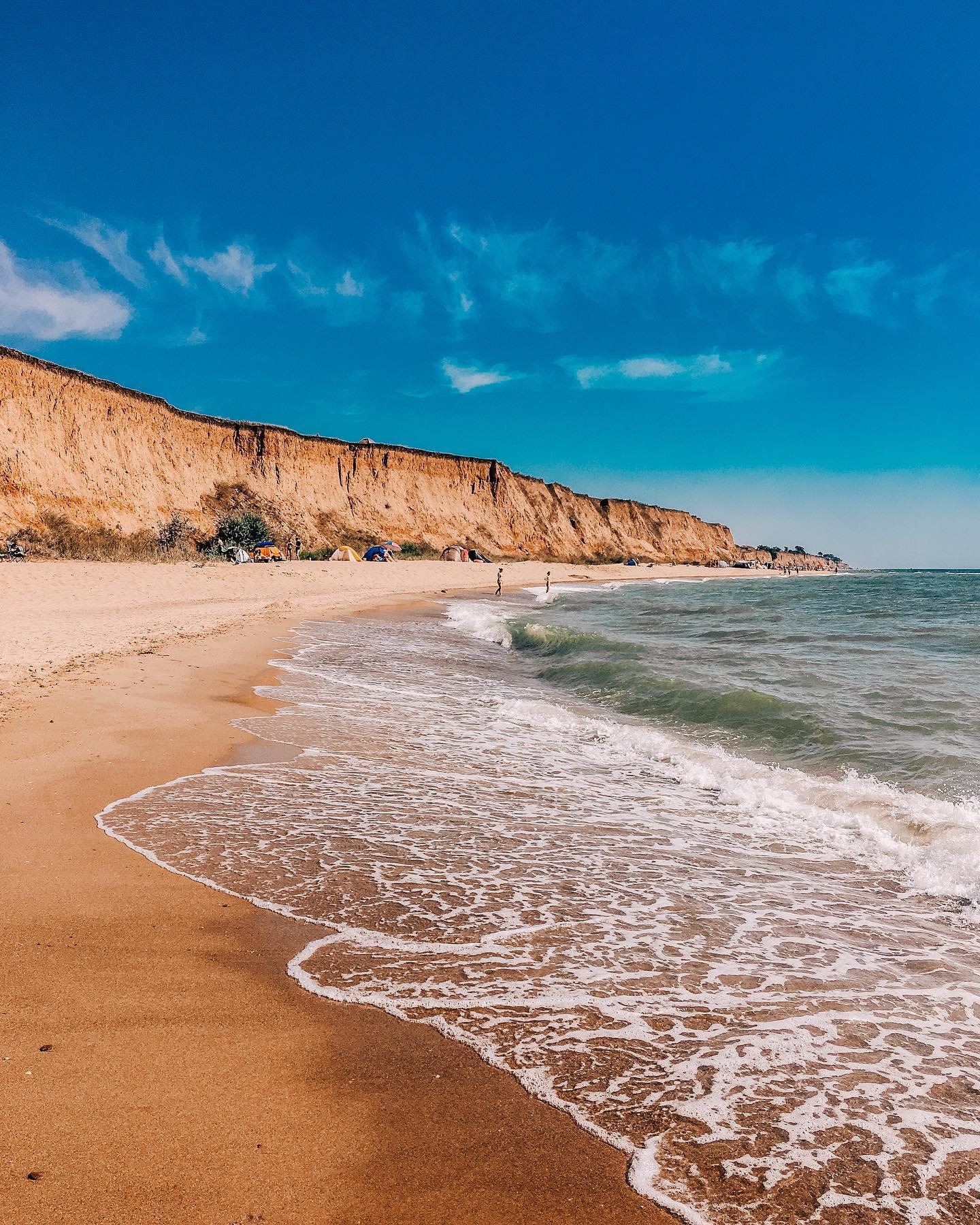 Gribovka is a village located on the Black Sea coast, 40 km from Odessa. The resort is ideal for families with children. The beaches are equipped with slides and attractions, many hotels have fully equipped children’s rooms and playgrounds designed specifically for children. But there are also opportunities for recreation for young people: a lot of cafes, discos, restaurants, large and small hotels. There’s also a camping site where you can stay for only 40 UAH ($7.5) per person and 20 UAH ($2.5) per car. A wide beach and clean sand contribute to a comfortable stay at sea, so you can not worry that someone will interfere with your rest. 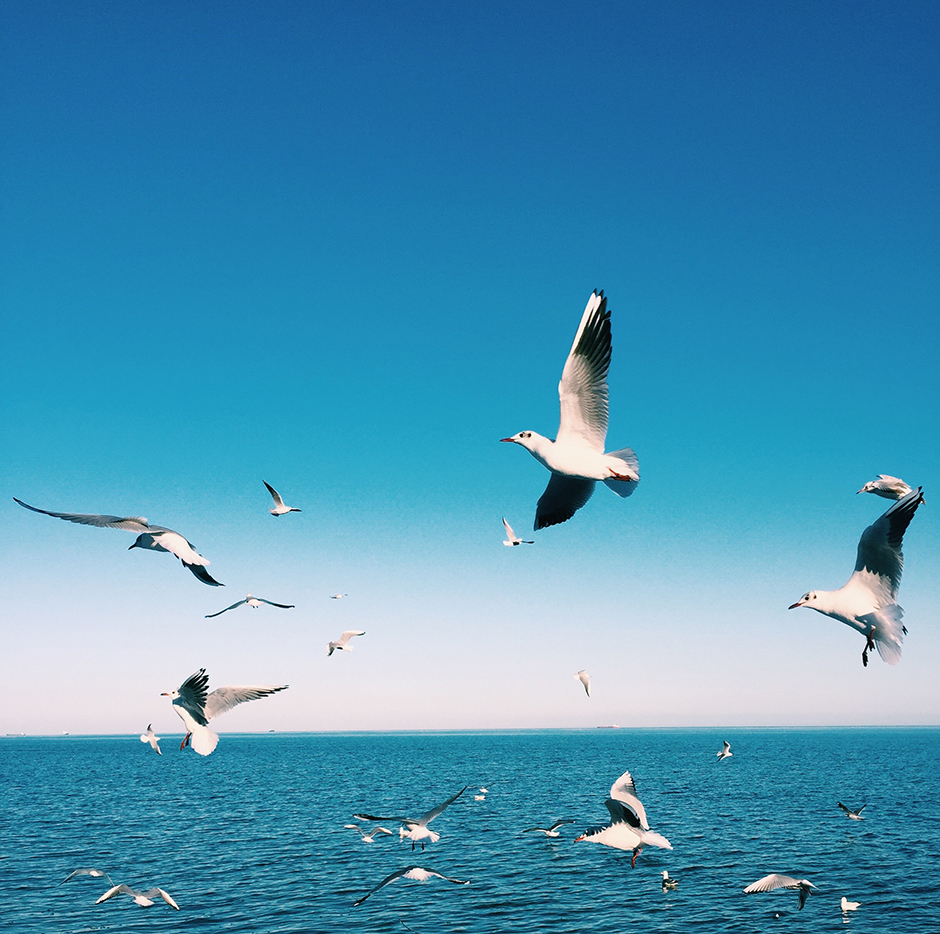 Odessa is like a tired sinner in age, but with incredible beach and sea charisma. To live by the sea, to work by the sea, to spend all day long by the sea. Everybody should be like that! If you’re planning a few days in Odessa this summer, save yourself the coordinates of the most authentic and wildest beaches in the city, which, for the most part, only locals get to. 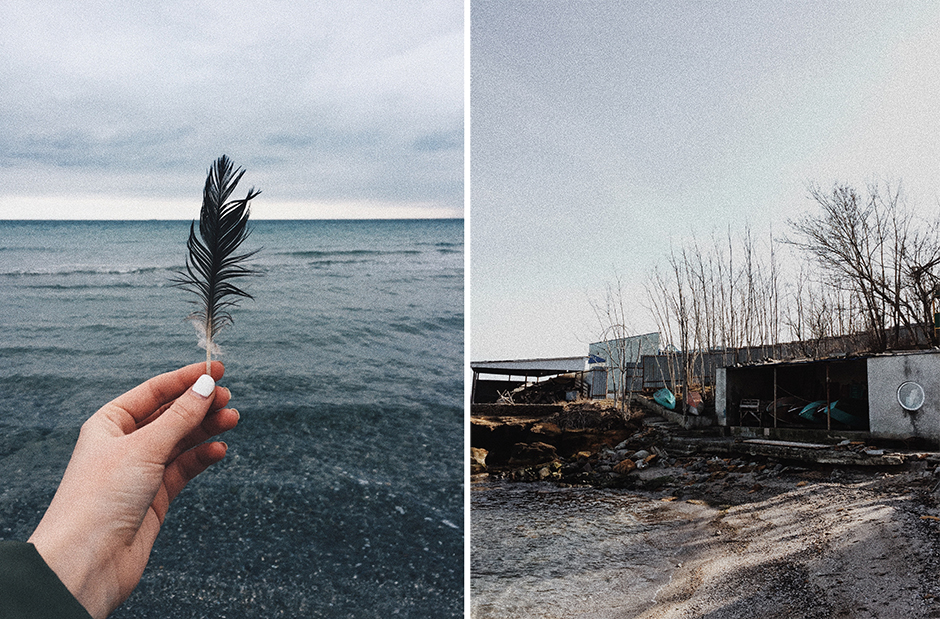 Wild Beaches on the Health Route.

A favorite spot of all Odessan bodgers, running fans, cyclists, moms with strollers and dayriders is the Health Route. It is a treasure trove of beaches where you can make movies about old Odessa and Robinson Crusoe. There is no perfect vip-sand, sun loungers and mafes with beer, and instead of piers there are powerful blocks of shell rock. Basically all these beaches are located between “Arcadia” and “Joy”, and lead to them gentle slopes and stairs from the time of King Gorokh.

Beach “Russia” is spacious, atmospheric and very “juicy” – even filters on the photos do not apply. The very buzz to wander to the outskirts of concrete marine blocks, overgrown with moss, and catch zen with a bottle of cider in the middle of the Black. You can reach it from “Arcadia,” but the best way is to walk from French Boulevard down a huge descent. Click on the way the trashy cool street art #artgorn, go left past the unfinished high-rise, and just past the Santorini Cafe is the target.

“Doggy” can compete with “Rossiya” for the palm of the first place, who is cooler. The beach is spread out and with rocks, and above it – a shady cozy forest glade for picnics, from which there is the most Odessa view of the sea. Tucked away “Doggy” between the “Dolphin” and “Joy”. You can get there from the French Boulevard and the Dunayev Alley.

READ
Things to do in Tioman, Malaysia

The third famous wild beach in Odessa is Chkalovsky. To it from the sanatorium Chkalova leads photogenic stairs for fans of minimalism. Chkalovsky is almost the same as “Sobachy” and “Russia”, but has its own highlight – the beach for nudists. The place has already become as classic and iconic in the city as the Opera House or Potemkin Stairs. If they tell you about all of Odessa, be sure to mention it. Especially good here in early spring or fall, when there is no one, you can climb on the big boulders and watch the sunset.

There are also many other little wild beaches on the Health Trail. The key to successfully exploring these places is not to be afraid to wander onto the steep pristine trails that lead to them.

This beach is not quite wild, but very beautiful. It reminiscent of Miami Beach because of the fashionable new buildings and villas above it, inviting and pleasant. Its main feature is an unusual pier with a pond inside. Located at the 10 th station of the Grand Fountain, near the Hotel Maristella. You can get there by streetcar №18.

The farther from the center, the steeper the spots are. Hop on streetcar #18 again and go wherever you like, but with a stop at the 14th station of Bolshoi Fontana near the Gorky Sanatorium. Gorky Sanatorium. It itself is very cozy, with nostalgic echoes of the past. From it the stairs to the beach lead – sprawling, with pleasant sand and bottom, not crowded at all times of the year. And from the cape, where goats often graze, there are views of the surroundings, which will appeal to all dreamers.

The beach area near Cape Big Fountain is a delight for introverts who love photography, chatting one-on-one with the sea and climbing hills. Landscapes are so beautiful that it’s hard to believe. Capes make your head spin, and in the spring you get a chance to be Alice of Wonderland and lie in a camomile field. The most famous beach here is Popovsky. Be guided by the “How nasty you really are” sign (Instagrammers, don’t miss it!). The main thing is that the spirit of such a native, old, dacha and unpretentious Odessa hangs everywhere here. All this beauty is located near the Uspensky monastery, the restaurant “Candle” and Mayachniy lane.

The beach is located outside of Odessa, just before you reach Chernomorsk (former Ilyichevsk). The local terrain here is reminiscent of a movie. The main attraction of the sandy oasis is a green pretty lighthouse. At its foot you can have a picnic, sunbathe, watch fishermen catch fish, see how many ships enter the port, and make googolpleks non-trivial photos. The road there is convoluted and designed for those who like to walk. It is necessary to take a minibus №220 to the Black Sea cemetery, turn to the long-long Yesenin Street, which leads straight to the Fish Port past the dacha settlement. At the lighthouse is wonderful all year round. Whether it’s sultry summer, sad autumn, snowy winter or embracing spring. You have to come here for a breath of fresh air when the rats are scraping at the soul like Holly Golightly.

All roads in Odessa lead not to the center, but to the 411th battery. If you want a break from the hustle and bustle and heat of the city, hop on the 185 or 191 bus and go on an interesting voyage to the park-museum of the heroic defense of Odessa’s 411th battery. From there leads a steep descent through the summer houses to a chic little-known beach with an unfinished fancy pier and a stylish mansion-laboratory. He in Odessa, perhaps, the cleanest and most European of all. Very much loved by Odessa insta-hunters for the conceptual views. If you go to the left of it, you can come across the nicest and most colorful restaurant with Odessa cuisine “Gogol at the sea” and a large “TV”, made from rusty beams, which shows only one movie – the sea.

If you want to go to the sea and to the forest, you are welcome to Leski! There is an atmosphere of peace and quiet, and the air smells of the sea, pine needles, flowers and berries. Hang out in the forest first and then run to the area’s wild beaches. They are for the connoisseurs of the beautiful, pristine, forbidden. Here you want to lie on the sand and read Hemingway’s “Islands in the Ocean,” listen to live guitar and stay all summer. Waterfalls, small bays, giant boulders, streams, clear sea – everything you need for a perfect holiday. Any yellow unicorn (actually, shuttle bus), which rushes to the shopping center “Riviera” will take you to this fairy tale. You need to get out at it, cross the road and go through a quiet checkpoint settlement “Pine Coast”.