Huacachina – an oasis that can be seen on the banknote

One of Peru’s main landmarks, the oasis of Huacachina has been immortalized on the 50 sol bill.

The first inhabitants of Peru, the mysterious Inca people, revered the small green area in the middle of the desert as a sacred land. They gave it the name Huacachina, which means “sacred place (huaca) + woman (china)” and linked it to the legend in which the oasis arose around a lake from the tears shed by the wife of a dead warrior. 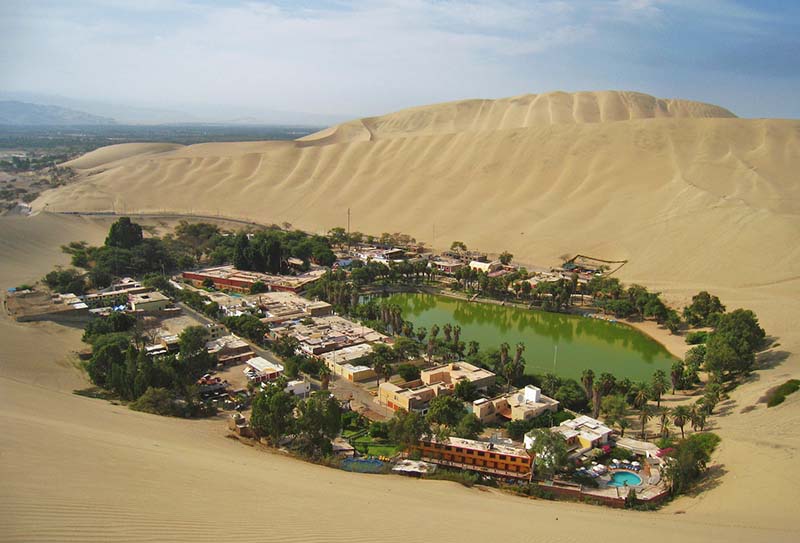 Today Huacachina is a popular tourist attraction, a trademark of Peru and an important source of revenue for the country, which is why it was honored to be immortalized on a banknote.

What is the sacred site of the Incas?

The desert oasis is very conveniently located, and largely for that reason it is a favorite among tourists. You don’t have to drive deep into the sands to visit the place. It is enough to drive only 4 km away from the town of Ica, which is located in the southwestern part of Peru. And the Pacific Ocean is a short drive away from the oasis itself-about 45 km or an hour by car.

The piece of green territory around the lake has dimensions of 480 m by 340 m, and the parameters of the reservoir are 200 m by 110 m. In Huacachina is a village of the same name with a population of 100 people. But there are many more tourists who come from all over the world to do sandboarding – which is almost the same as snowboarding, but on the sand dunes. This entertainment is exotic and unique, so that wants more than enough.

In addition to the sands and dunes around the lake is full of picturesque vegetation. And the body of water itself is quite remarkable. Not surprisingly, the aborigines of Peru Inca worshipped it as sacred and even invented a legend about it. Later, however, the Peruvians created their own myth about the lake’s origin. Allegedly, a mirror, carelessly dropped by a distracted local princess, turned into it. She was frightened by an approaching enemy soldier. After the appearance of the body of water, the girl dove into it, hiding from pursuit, and turned into a mermaid.

READ
What to see in Canterbury, England? 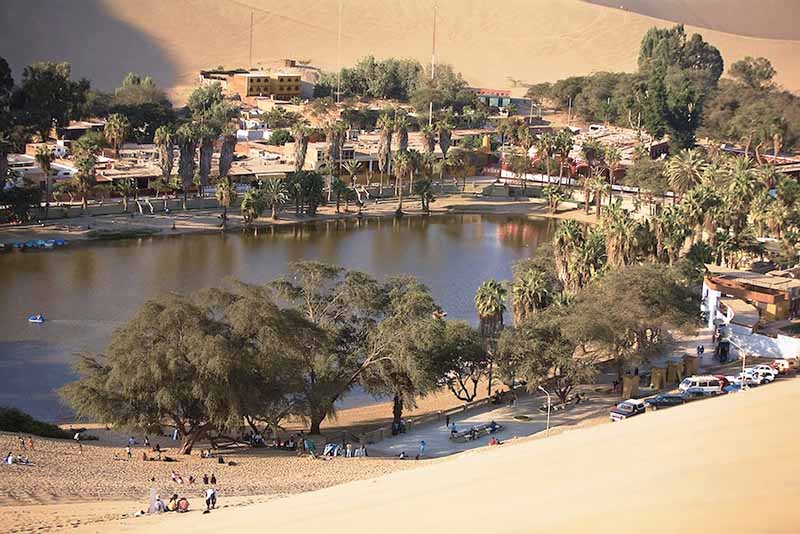 As the legend goes, she still lives in the lake. But it is impossible to verify the truthfulness of the myth: the water is murky, and one can’t see anything in it. The lake is fed by the waters of the underground river, which flows through the Andes Mountains and collects various minerals along the way. Because of this, the water has a brownish tint. It is said that its water is therapeutic, although this has not been scientifically confirmed, but many tourists still want to bathe in it.

Man reaches out his hand to nature.

Peru’s government does not just welcome tourists – their money is invested in the restoration of the oasis. The fact is that due to inordinate human activity, the area of the Huacachin has shrunk in recent years, and the lake has begun to dry up. The country could soon be deprived of a unique landmark. Urgent measures had to be taken.

There is a pipeline to the lake, through which water is pumped slowly. A lot of infrastructure was built for tourists, so that they do not litter the green area, do not kill the nature, but at the same time they can relax and spend money on entertainment. In addition to sandboarding, there are parachute rides and visitors line up for a bird’s-eye view of the Oasis of Ouacachin. There are several fairly good hotels, walkways, and streets with souvenir shops and bars.

Huacachina – an oasis in Peru

Huacachina is a unique oasis and village of the same name located in southwestern Peru. Perhaps the name of the village is an abbreviation of the following Quechua words “wakachina qucha,” which means “hidden lagoon.” Which is not surprising! After all, the reservoir is really located in the shade of trees among the vast desert.

This oasis is about five kilometers from the Peruvian town of Ica in the province of the same name. The reservoir located in this oasis is often referred to as the “Oasis of the Americas”. According to local legends, the lake’s water and mud have healing properties.

There is a beautiful legend about the origin of the lake. Once upon a time, a local princess lived here in ancient times. One day she decided to swim, took off her clothes. However, when she saw a man-hunter approaching in the mirror, the girl hurriedly retreated, forgetting to take the mirror with her, which subsequently turned into a lake. There are other legends describing the origin of this oasis.

Huacachina is a popular tourist destination

Huacachina is a small village with a population of about 100 people. But this small community attracts tourists from all over the world. Huacachina is one of the most popular places among tourists. Most travelers visiting Peru definitely put Huacachina on the list of the most interesting places to visit. If you go to Instagram and look at posts about traveling to Peru, you will see dozens, if not hundreds, of posts dedicated to this unusual oasis. Many of the Instagram-bloggers purposely climb higher to take better pictures of the landmark. The pictures really turn out amazing: a green oasis with a small reservoir looks like a bright spot among the endless sands. What a breathtaking sight!

If you intend to visit Huacachina, you can use the services of a local guide. You can go for a ride in a buggy, a special vehicle suitable for driving on quicksand. People of all ages love to ride on this wagon. Driven by professional drivers who are well versed in the local area. Recently, tourists are increasingly ordering a very popular adventure tours. And a buggy ride is a must. “Dune Buggy at Huacachina” by Alex Proimos is licensed under CC BY 2.0

Another activity for tourists coming to Huacachina is sandboarding. The sport is similar to snowboarding but instead of moving on snowy slopes, boarders ride the sand dunes.

READ
Savona, Italy - what to see, where to eat, and what to do in the evening “Sand Dunes around the Oasis at Huacachina” by Alex Proimos is licensed under CC BY 2.0

A plus for tourists is that you can visit the oasis all year round. The weather here is always warm. However, from December to March there can be precipitation. The rest of the year it is very dry.

What can I buy in Ouacachina?

Not far from the entrance to the waterfront, there are stalls selling various souvenirs, jewelry, t-shirts and other tourist trinkets.

Here locals also sell delicious jams made from local fruits. For example, from figs, mangoes or guanabana (pictured below). Among other things, there are liqueurs and wines for sale, which are brought here from the town of Ica. However, all tourists visiting Huacachina should know that all goods sold here are undoubtedly more expensive than in the nearby town of Ica. This is not surprising at all. Resort towns and villages all over the world are not known for low prices.

If you need an ATM, the best place to withdraw money is in the nearby town of Ica, as there is only one ATM in the village of Huacachina itself, located at the Carola Lodge Hotel. However, even it is not always filled with money. So when you arrive in Huacachina, it is better to have cash already.