The main attractions of Noto

The picturesque town of Noto is located just 32 kilometers southwest of Syracuse. It was severely damaged by an earthquake in 1693, but has been rebuilt and is now considered an architectural gem of late Sicilian Baroque.

Among the eight most visited sights of Noto can safely include:

A Roman Catholic cathedral erected in memory of St. Nicholas of Myra. The temple was designed by Rosario Gagliardi in the early 18th century and completed under the direction of Bernardo Labisi in 1776.

The church is executed in strict forms, with three portals divided by Corinthian columns and a wide staircase in front of the main entrance.

The Church and Monastery of St. Francis

The Church and Monastery of St. Francis were built between 1704 and 1745 by the architect Vincenzo Sinatra. The portal with three niches is surrounded by Baroque columns and on the terrace we can see a statue of the Virgin Mary in marble. The inside is characterized by a variety of decorations. The church is home to some rare 16th century paintings.

A residence of the family of the same name built in 1765, the Palazzo Nicolaci. The unique elements of this Baroque building are the Ionic columns and the wide doorway. There are three small balconies on each side that are supported by picturesque consoles. They depict sirens, chimeras, centaurs, winged horses and children’s portraits.

The house consists of 90 rooms. The descendants of a noble family live in some of them. The first floor is occupied since 1817 by the town library with old books, Spanish and Latin manuscripts.

The construction of the Church of the Holy Cross began at the end of the 18th century and was finished only 200 years later. The main decorative elements are the huge stone statues of lions from Rome, as well as a statue of the White Madonna made of marble by the sculptor Francesc Lauran. The golden altar cross is adorned with a small wooden plaque depicting Jesus. Legend has it that it was made by Luke himself.

The Porta Reale is a majestic gate. In 1838 the people of Noto created the magnificent Porta Reale Gate for Ferdinand II, the monarch who visited the city. The famous arch is decorated with sculptures of pelicans and dogs. This is where Avenida Vittorio Immanuel begins, Noto’s main street where most of the city’s attractions, hotels and stores are located.

The Palazzo Duchesio, called the Italian Peterhof, appeared in the 18th century and was originally used as the residence of the Duke, but now houses the City Hall. The palazzo is so popular because of its Hall of Mirrors, a French-style room with lots of antique mirrors, beautiful stained-glass windows and ornate paintings. The room has an oval shape and is decorated with stucco and gold. Ceremonies and receptions are held there.

The author of the project of the church of Santa Chiara in 1785 was the architect Rosario Gagliardi. The church is considered an example of fine Baroque and is distinguished by the unusual decoration of the space. The oval interior is structured by a dozen columns, and angels and moldings are used for decoration. The bell tower has a wonderful view over the whole town.

Cost of the tour: admission is free, but you have to pay 2 euros for access to the roof to see the panorama.

Lido di Noto beach is recognized as the best beach in the city. It is unique in that it has not the stony, typical of Sicily, but a sandy surface and a smooth entrance to the water. And when the weather is fine you can see the dolphins.

There are usually free umbrellas and sun loungers for the visitors.

We hope that your journey through the wonderful city of Noto will be unforgettable!

The history of Noto goes back to immemorial times: it is said that Neas was founded on the hill of Mendola by the people of Sicily in the period of the fall of Troy. In the 3rd century B.C. Neas is conquered by the Greeks of neighboring Syracuse; the victors spread their traditions and religious cults in the city.

It was then under Roman rule as a feudal city and became a municipality during the Roman Empire, granting the local administration certain privileges, such as the power to govern Neas on the basis of its own laws. It was then under Arab rule, becoming a great stronghold and a major town in one of the three valleys into which the Arabs divided Sicily. After two centuries of Muslim domination, Noto was conquered in 1090 by Roger I, Grand Duke of Sicily. 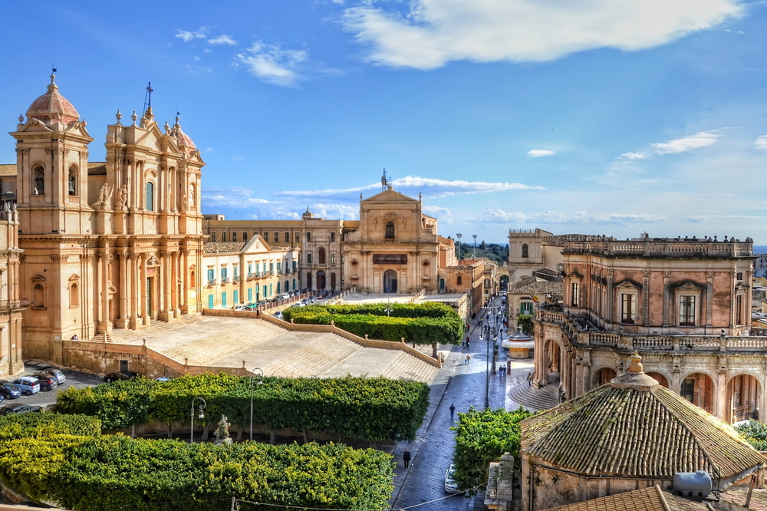 Nature played no less an important role in the history of Noto than people: in 1693 the city was destroyed by an earthquake that affected all of southeastern Sicily. Rebuilt on the hillside of Meti, the city was like a huge theater without backstage, magnificent and proud. It owes its architectural appearance above all to the creative genius of three architects – Rosario Gagliardi, Vincenzo Sinatra and Paolo Labisi, who managed to create a stunning masterpiece of monumental unity. Although all three lived and worked in the province, the city they built is highly original; it is not the strict language of the canonical Baroque, it is complemented here by elements of Renaissance style, Spanish motifs and neoclassicism. Noto’s architecture captures the whimsical imagination of its three creators. 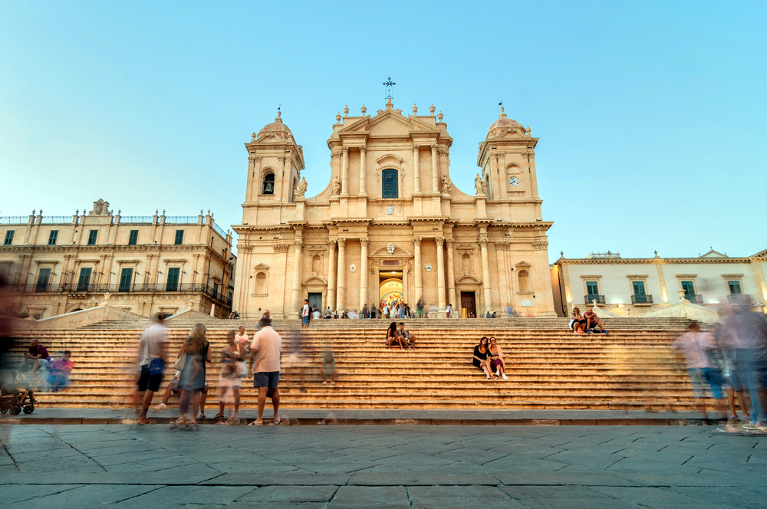 The Cathedral of Noto is accessed by a monumental staircase. Construction began a few months after the earthquake but was not completed until 1770. The façade, devoid of any decoration or unusual elements, combines Baroque motifs with elements of Classicism. Three naves are divided by high pilasters. The chapel in the right aisle contains a silver reliquary with the relics of the town’s patron saint Corrado. 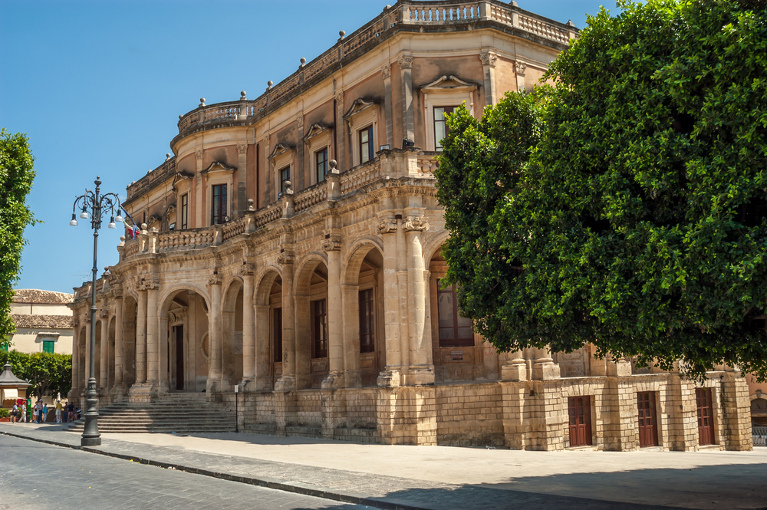 The Palazzo Ducezio is opposite the cathedral; it is the city administration building. The base of the palace is elevated above the level of the square; it was built from 1746 to 1830 on the project of Sinatra and was originally a single storey. The second floor, added a century later, unfortunately, damaged the harmony of the original neoclassical design. Of interest on the interior of the building is the grand salon, richly decorated with gold and stucco. 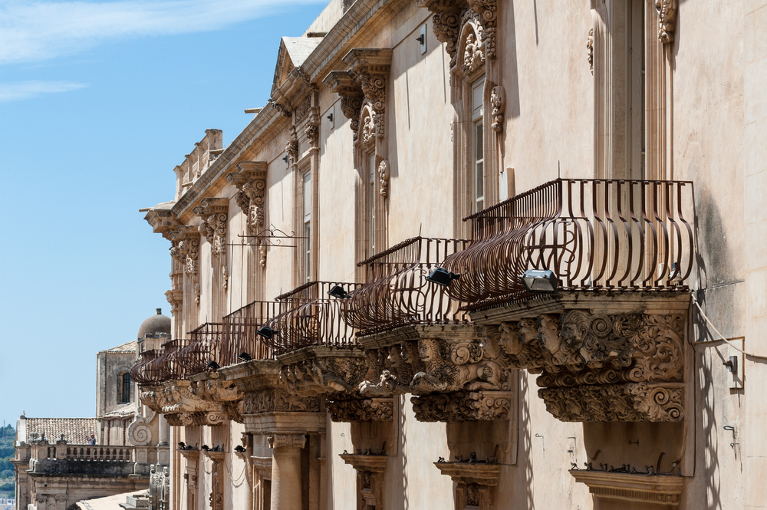 Farther along stands the Palazzo VILLADORATA; its broad facade overlooks via Nicolacci, the street perpendicular to the avenue. The convex wrought-iron balconies on consoles with a variety of figures of men and beasts, scrolls-volutes and arabesques are one of the most vivid expressions of the local Baroque. Built in 1731, the building was long inhabited by the princes of Villadorata, and recently most of the building has been taken over by the city. Inside are ninety rooms, with ceilings painted with 18th-century frescoes and the interior decorated with rich stone decorations and wrought iron window grilles. 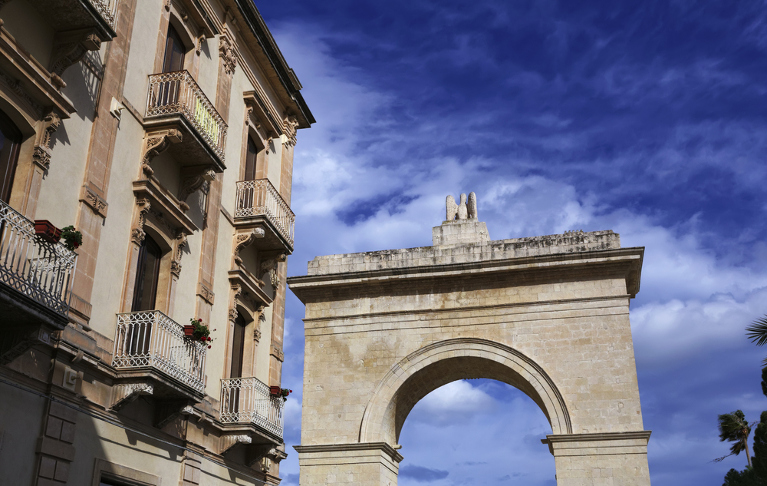 The Triumphal Arch on the Prospect is decorated with three symbolic sculptures. They are a tower with teeth (power), a dog (loyalty) and a pelican (self-sacrifice). The structure was erected in honor of the visit of Ferdinando II of Bourbon to Noto, who inaugurated the monument in 1838. The gate was built with the same local golden limestone that was used to build the churches and the palaces of Noto a century before. 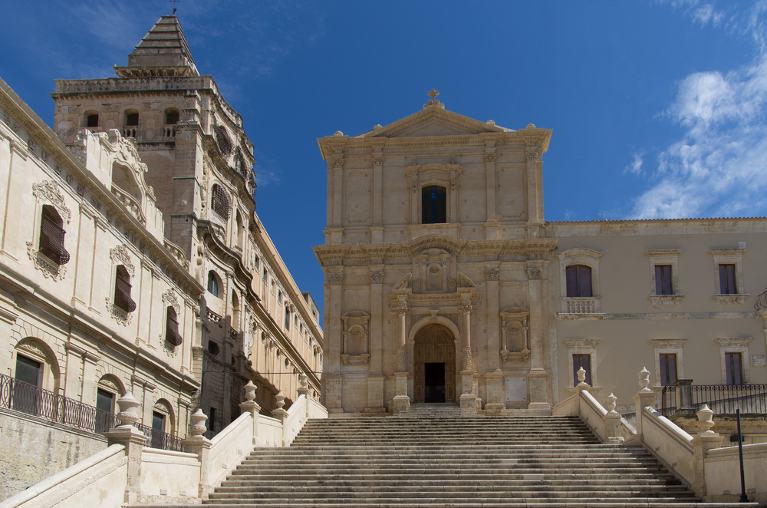 The Church of San Francesco all’Immacolata is also preceded by a monumental staircase that ascends to the temple from the avenue. The church and monastery were built between 1704 and 1745. According to the Franciscan tradition, the church has a single nave. The white walls are decorated with stucco stucco in rococo style.

READ
The perfect trip in Estonia

The church of Santa Chiara 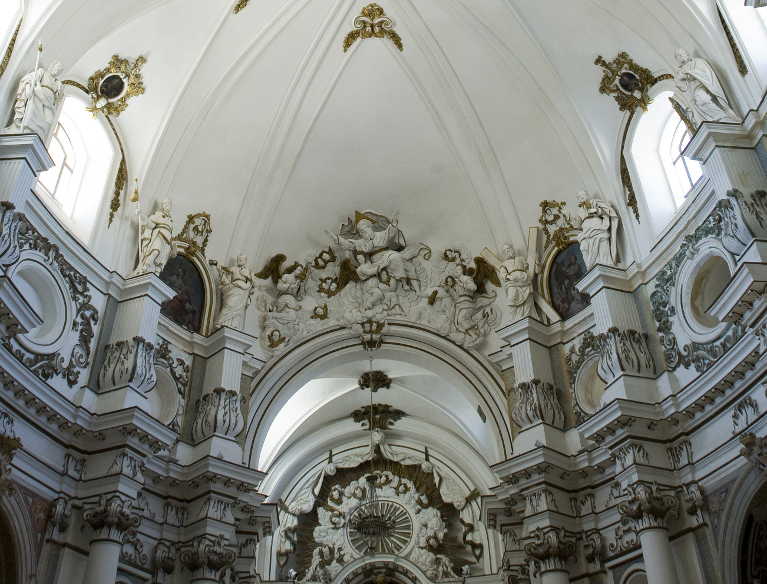 The church of Santa Chiara by the architect Gagliardi is an example of delicate Baroque. It was built in 1785. The small oval interior, decorated with stucco and angelic putti, is structured by twelve columns; it is one of the most interesting spatial solutions of this architect.

The Monastery of Santissimo Salvatore 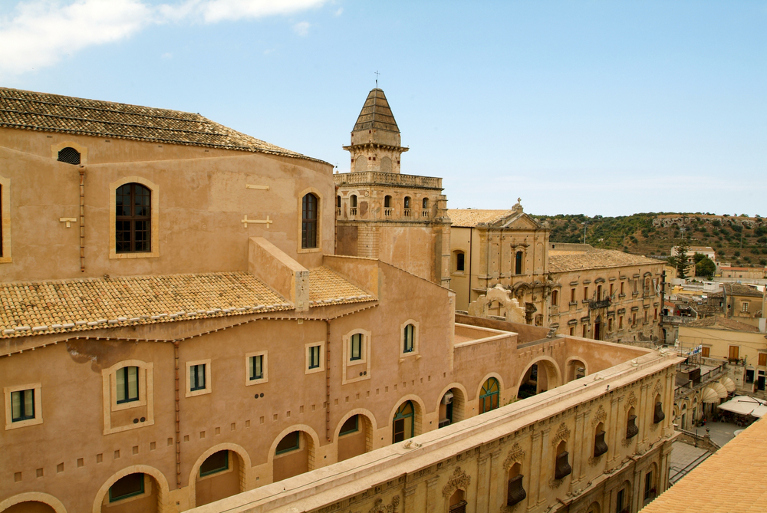 The Convent of Santissimo Salvatore is the biggest building in the city, with a surface area of 11,000 square meters. It was built between 1710 and 1791. The flat twin pilasters that frame the large windows of the second floor and the rich decoration are reminiscent of the Plateresque style, so common in Portugal. The protruding wing is the architect’s key function, rising like a tower above the surrounding domes and buildings, leaving no shadow of doubt about the superiority of this monastic order over the others. This feeling is further reinforced by the stone decorations and the wrought iron lattices. The church of the same name was built on a spacious square at the end of the 18th century. Its peculiarity is the facade, which is a transition from the Baroque to Classicism.

The “Infiorata” Festival of Flowers 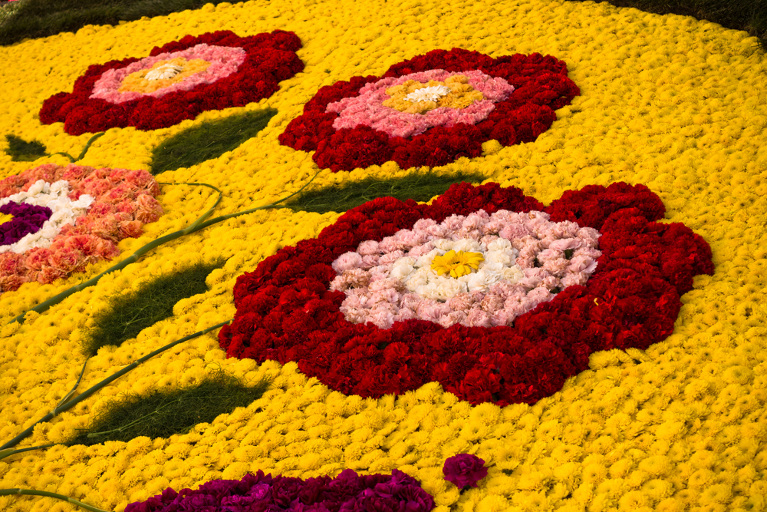 Every year in May, Via Nicolacci hosts the traditional festival of flowers “infiorata”. Teams of artists decorate the street with billions of colorful petals of Mediterranean flowers, making the most authentic paintings and magnificent patterns. The street’s perspective is closed by the Montevergine church, a design attributed to the architect Sinatra. Its concave façade is framed by two side towers; inside there is a single space delimited by columns of Corinthian order. The Church of the Crucifixion is the second most important church in Noto after the cathedral and the richest in works of art. It is located in the upper part of the city, in Piazza Mazzini. The building was designed by Gagliardi in 1715. Inside are two Romanesque stone lions found among the ruins of the church of the same name in the old Noto and a white marble statue of the Snowy Madonna from 1471 by Francesco Laurana.

READ
The 10 largest deserts in the world 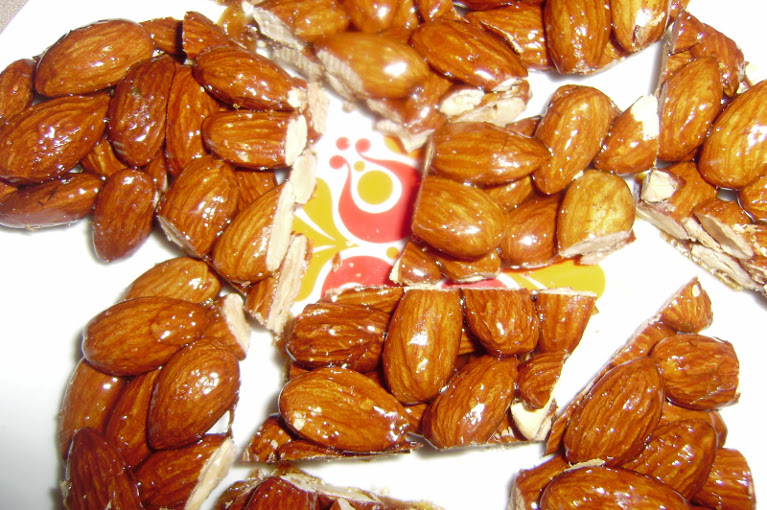 Torrone is a type of cos-halva once invented by the Arabs; here it is made from almonds of the variety Pizzuta di Avola, which has Slow Food status and is therefore considered particularly refined. 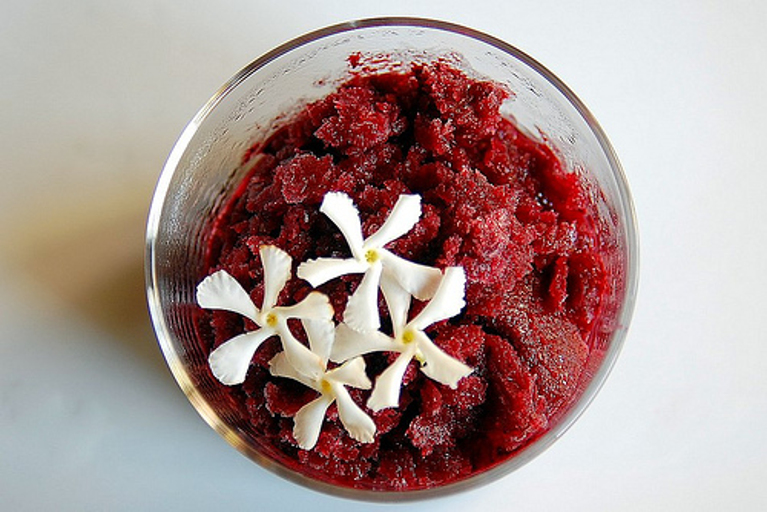 Traditionally, Sicilian granitas are made in lemon or almond flavors. But there are also coffee, mandarin, silk, orange, strawberry and pistachio granites.

The peculiarity of the drink in this part of Sicily is that its consistency is more liquid and creamy. It is often served with the traditional Sicilian brioche (not to be confused with the Roman brioche, that is, the classic croissant), a classic local summer breakfast.

Lemon granita can also be added to iced tea or diluted with a glass of sparkling water. Coffee granita is great with cream and, again, brioche.

Some ice cream shops offer tourists three mini portions of granita to try, so if you’re having trouble deciding, take this option. 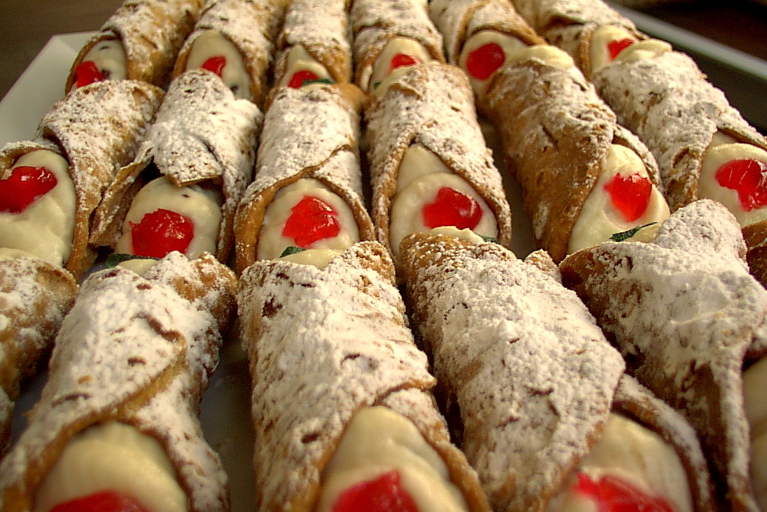 All over the world, it is the cannoli that is considered the most famous Sicilian sweet. In fact, every corner of Sicily has its own local variations. For example, in the southeastern part of the island cannoli are made very differently than in Palermo: they do not contain candied fruit or chocolate – only ricotta, which pastry chefs in the Noto Valley skillfully mix with sugar.

There are also variations with cream, chocolate, rum, etc., but the classic cannolo is filled with ricotta.

It’s a real treat in paradise for food lovers.

The international airport of Catania (Fontanarossa) is about 80 km from the city.

To get to Noto you can take the Trenitalia train through Syracuse.