Continuing our virtual journey through strange and unusual tourist attractions of different countries, and today we’re going to get acquainted with Norway!

Most of you might not believe it, but Norway is much more than just ski slopes. If you take a little time to explore the amazing places in this picturesque mountainous country, you’ll discover many unexpected things. 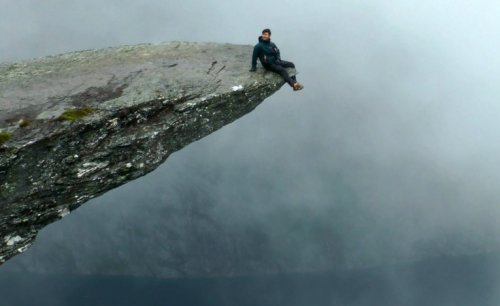 10. “Trolltunga, Hordaland If altitude and adrenaline are your thing, you should not miss the Troll Tongue on Skjeggedal near the town of Odda overlooking Ringedalsvatnet.

The tongue-shaped rock outcrop is 700 meters high. It was formed during an ice age, when a large part of the mountain froze and a piece of it broke away.

This unusual ledge offers an incredibly scenic view, although only the most physically fit can get here. Climbing the mountain takes several hours. However, even if you get to the “Troll’s tongue,” to climb the ledge dare only the most desperate brave.

The hike to this place goes through the high mountains and takes 10-12 hours. In total, you have to overcome 23 km (there and back) and climb to a height of 900 meters. It is a long and difficult hike, but the result is worth it! 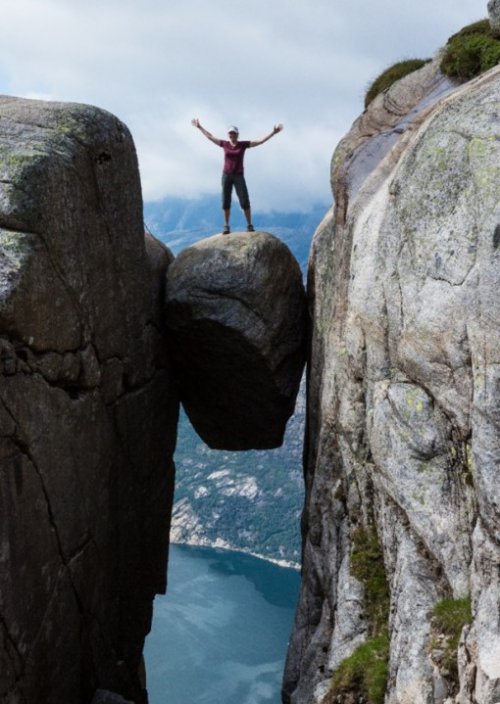 9. Kjeragbolten, Forsand, Rogaland Fylke Kjeragbolten (Norwegian for “Kjerag Boulder”) is a huge rock that has wedged into a mountain crevice at the edge of Kjerag Mountain in Lüse Fjord.

The boulder itself is 5 m³ in size and is a block of stone hanging over a deep chasm at a mind-boggling height of 984 meters. Despite the impressive view from this place, it is easy to reach it – on foot and without any special equipment. Kjorag Mountain itself is a popular tourist area, and Kjoragbolten is a favorite photo location among tourists.

However, in this case, too, only the most courageous climb here, and only the most desperate climb the boulder to enjoy the breathtaking view of Luce Fjord.

Because of its enormous popularity, there are lines of people who want to take a memorable photo at the boulder. The wait can take anywhere from a few minutes to over an hour, so you should have patience as well as courage when going there. 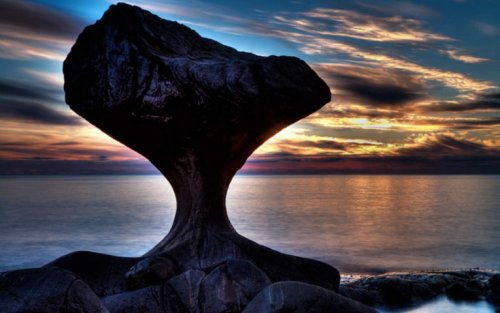 Formed over thousands of years by the rocks hitting its base, Kannesteinen Rock is an impressive mushroom-shaped rock formation located on the coast of the Oppedal countryside, about 10 kilometers from the town of Måløy.

The unusual rock formation is almost 3 meters high and its surface is wide enough for 3-4 people to sit on. Kannestainen Rock is very popular among tourists and photographers who want to take picturesque and impressive photos. 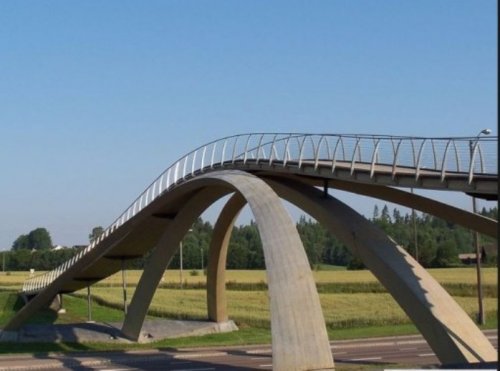 7. The Bridge of Leonardo da Vinci, Akershus Unfortunately, this bridge was not built by Leonardo da Vinci himself, but by the Norwegian artist Vebjørn Sand, but he used sketches made by the Italian genius himself in 1502 to create this unusual structure.

It is a much smaller version of the bridge that Leonardo da Vinci designed as part of a civil engineering project for the Sultan of Constantinople (now Istanbul), Bayazid II. At the time, the sultan rejected the design of the bridge, which was supposed to be built across the bay with a length of just under 400 m, doubting its practicality.

The Norwegian artist recreated the bridge proposed by Leonardo da Vinci on a much smaller scale, retaining its minimalism and design. 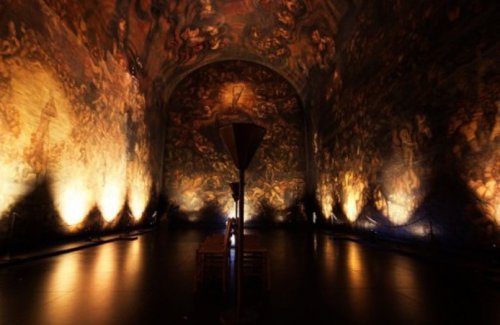 6. Emanuel Vigeland Museum, Oslo This amazing work of art is located in a part of the building in which there is no natural light at all, that is, the sunlight from the street does not enter there.

The interior is rather dimly lit and the walls are decorated with drawings of people from floor to ceiling, creating a stunning effect. 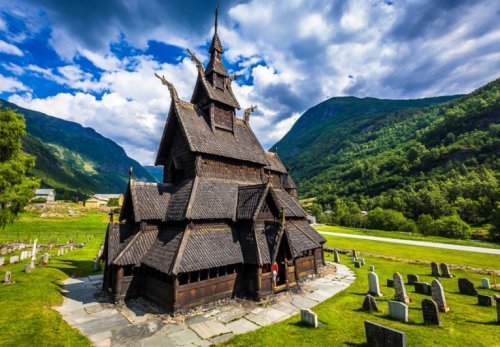 The frame church at Borgunna was erected in honor of the Apostle Andrew, presumably in 1150-1180. 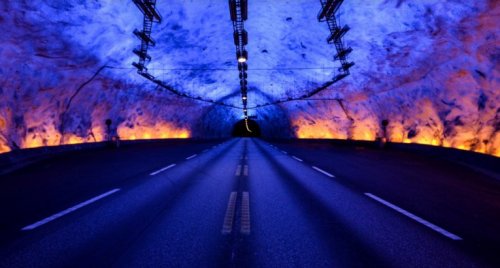 4. Lærdal Tunnel (Lærdalstunnelen), Aurland The Lærdal Tunnel, located in the province of Sogn og Fjurane and connecting the municipalities of Eurlann and Lærdal, is the longest vehicular tunnel in the world – its length is 24.5 km.

An interesting feature of the tunnel, opened in 2000, is the unusual lighting, which was designed to create the illusion of daylight. So if you go from Oslo to Bergen (highway E16) by car, you can personally assess this amazing car tunnel. 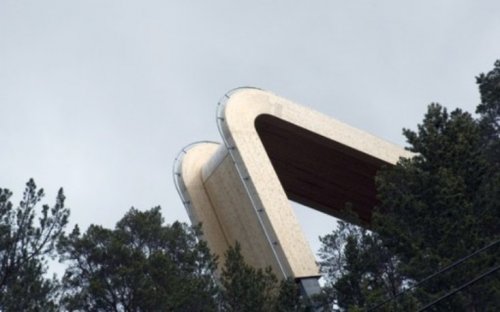 3. Aurland Lookout, Bergen This unusual lookout looks like the most dangerous slide in the world, but at the very top of this amazing wooden construction is installed a thin glass panel, which does not allow visitors to “roll down”.

From the observation deck, located 3 hours from Bergen, there is a stunning view of Eurlann, a small town in the province of Sogn og Fjurane, one of the largest fjords on the west coast of Norway.

The wooden construction of the observation platform, 4 meters wide, starts at the roadside and stretches for 30 meters, providing an opportunity to see all the beauty of the local nature.

Here you can almost always see many tourists enjoying the view of the fjord, so there are special parking spaces for 2 buses and 10 cars nearby. 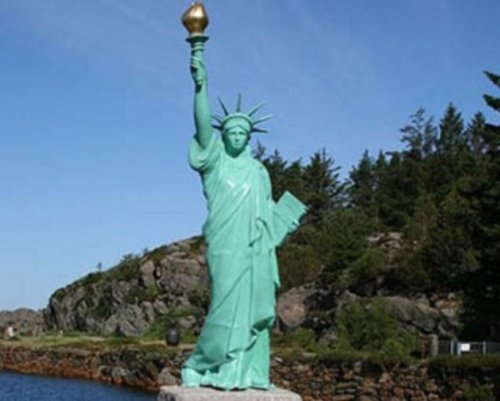 2. The Statue of Liberty, Karmøy No, you don’t think so, and this is no mistake. This is where the Statue of Liberty is located. Not quite the real one, though, as it is just an exact copy of the one in New York. However, the copper from which the real Statue of Liberty was cast, a gift from France to the United States of America in 1876, was mined in copper mines from these very places. 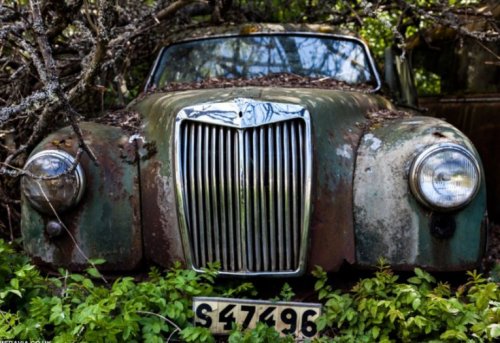 1. Bastnäs Car Cemetery, Bastnäs Most likely you have seen pictures of this place many times before, but you still didn’t know where it was. It may be nothing more than an old junkyard, but for many photographers it is a work of art that should definitely be captured on camera.

This place is on the Swedish-Norwegian border, about 113 km from Oslo. All the cars you can see here are collected by two brothers who dismantled them for parts and successfully sold them until the 80s of the last century.

To keep things moving, they kept buying up old cars and running the business from a house built in a field surrounded by the remains of abandoned Saab, Volvo, Buick, Ford, Opel, Volkswagen, Fiat and other various brands. The dense forest continued to devour the cars that came their way, and after nearly 40 years, nature finally won the battle.

One of the owners left here in the early ’90s in search of a better life, and his brother continued until 2010. According to him, there are as many as 1,000 rare cars in Bastnas Woods.

They say this collection of cars could be worth about $150,000, and that doesn’t include parts, but Bastnas is so far from civilization that most of these cars aren’t likely to move anytime soon.

If you want to go there to take something special from there, the only thing you’ll need is a helicopter and a chainsaw. for starters.

A land of deep fjords and impregnable cliffs, fairy trolls and brave Vikings. A land of sagas and legends, where almost every remarkable place has many tales and legends associated with it. The land that everyone, who heard tales of rugged adventures in the northern seas and distant misty mountains, dreamed of as a child. And why is it in your childhood? Many adults, whether they come to these lands for the first or fifth time, plunge into another, fantastic reality and little by little begin to believe in miracles again. 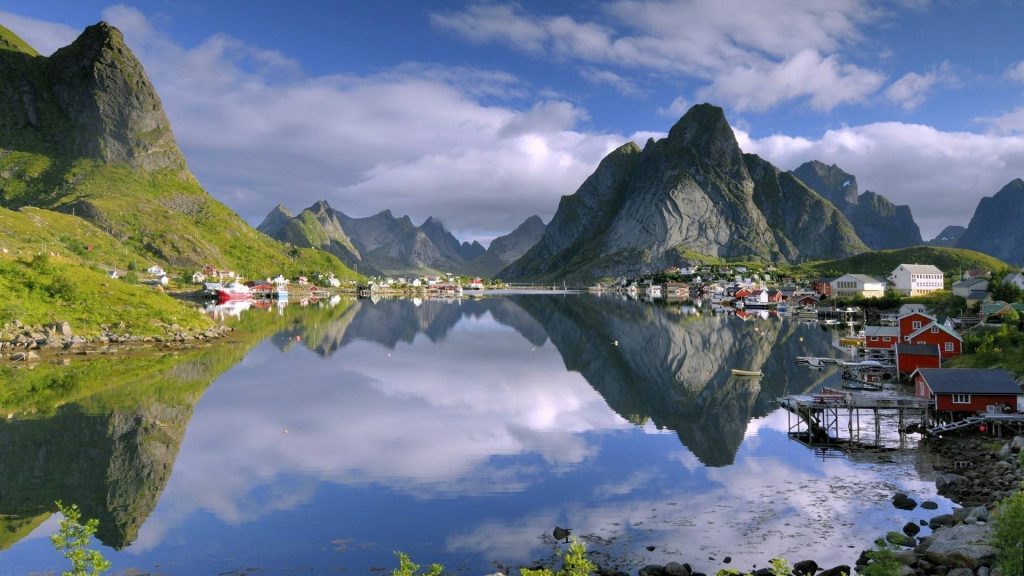 By volume, perhaps the most enormous waterfall of Norway is Vöringsfossen. Its height is 182 meters. You can admire its view from the observation deck, which leads a hiking trail length of 1.2 kilometers, as well as from below, which is more convenient, but not as impressive. For the sake of such beauty it is possible to suffer. The waterfall is part of the Bjøreia River, which flows in a gorge among picturesque cliffs and flows into the sea. Also, rainbows are very common here, and there’s a great photo opportunity – it’s hard to find a better spot. 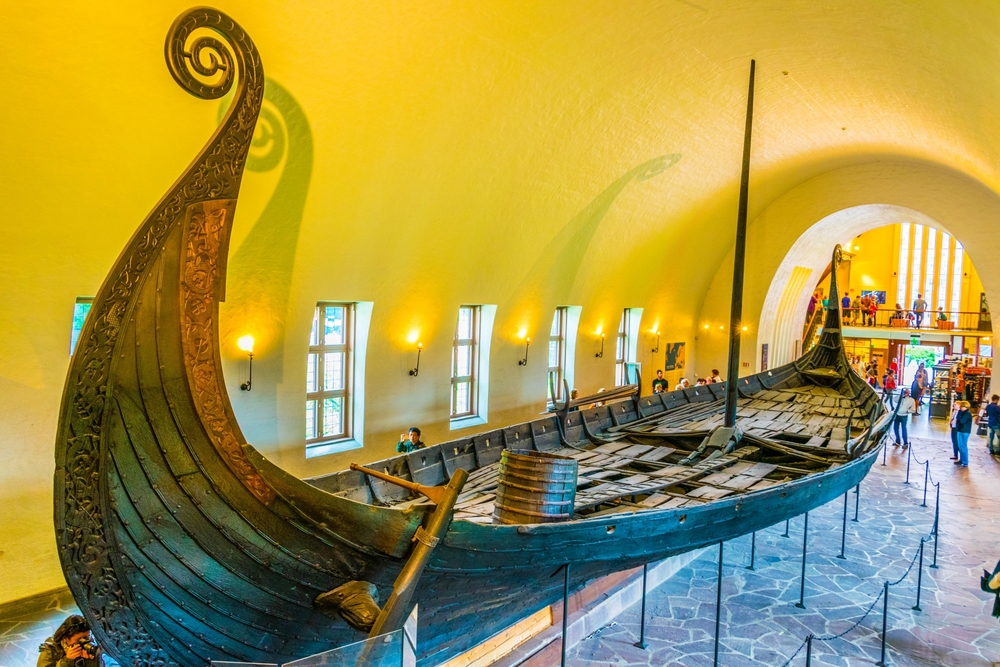 Viking Ship Museum is one of the most famous attractions in Oslo. There are ships here that are thousands of years old. This is direct evidence that the Vikings may have been in North America before anyone else. Here you can find not only ships, but also household items of Norwegian ancestors, the very Vikings who terrorized the surrounding settlements with their berserker raids. From the outside the building looks quite peaceful, but it is much more interesting inside.

The Justedalsbreen Glacier is the largest glacier in Europe, and second only to the Alech Glacier in length. The area of the glacier is 475 square kilometers, it has about fifty branch glaciers. The most famous are Briksdalsbreen, Nygardsbreen and Austdalsbreen. On the Nygardsbreen, one can best trace the chronicles of glacial retreat after the “Ice Age” in 1750. 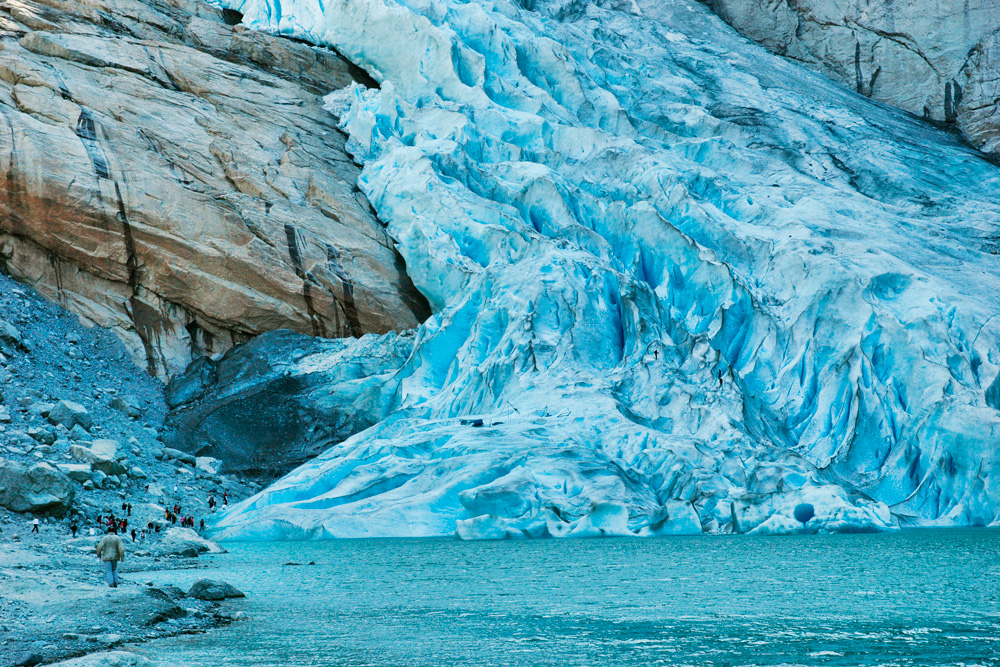 Located far above the Arctic Circle on the island of Magyore, Cape Nordkapp is the northernmost point of Europe. The height of the cape is 307 meters. The cape is a high cliff with many lakes and interesting nature. In addition to the landscapes are remarkable local birds – tupiks, northern bald eagles and cormorants. 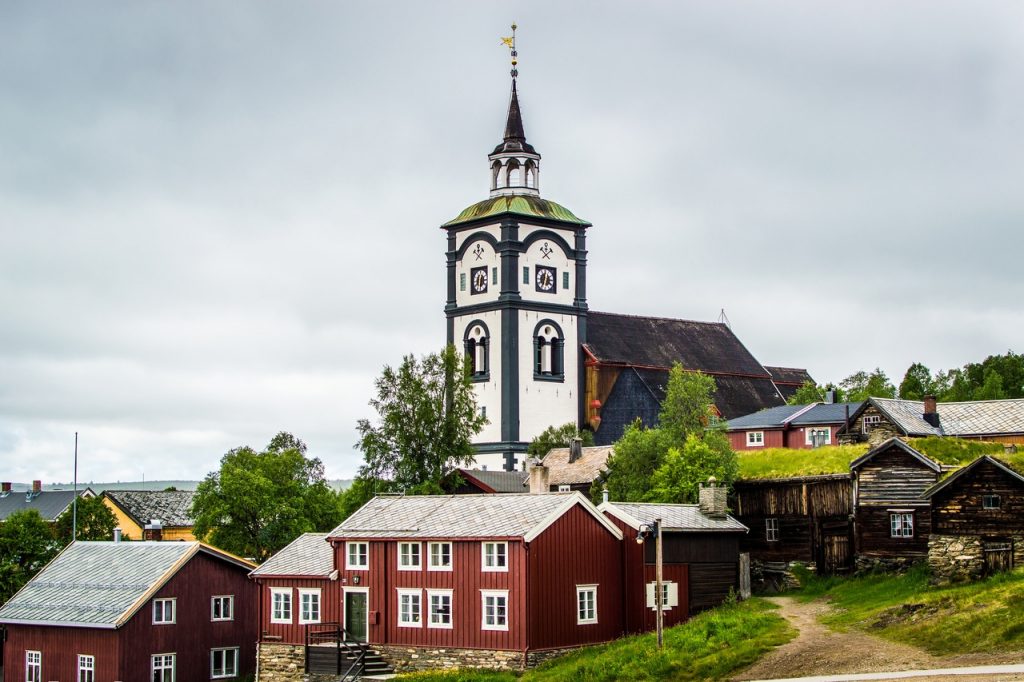 Rørus is an ancient Norwegian city located in the central part of the country. It is 600 meters above sea level, and is surrounded on all sides by mountains. The most important sights here are ancient wooden buildings and picturesque landscapes including mountain rivers, lakes and mysterious forests.

Bruggen is a beautiful ancient waterfront in Bergen. It is the oldest district of the city, but because of numerous fires the original buildings have not survived. After a fire in 1702, reconstruction of the structure was carried out. At the moment in the city are similar to the real buildings of the 11th century. 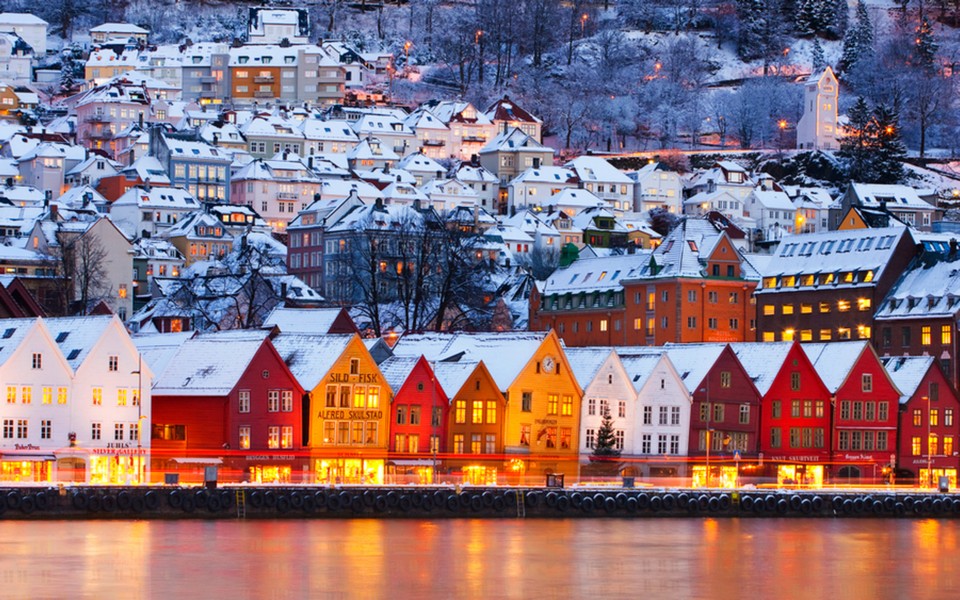 More than two hundred sculptures of the Norwegian master is located on the territory of Vigeland Park. This park is a veritable open-air museum: made of bronze and granite, the statues depict human life in all its manifestations. Its main attraction is the enormous Monolith monument, depicting the senseless pursuit of success. In addition to the statues, the park has an attractive and walkable area, which attracts many locals in addition to tourists. 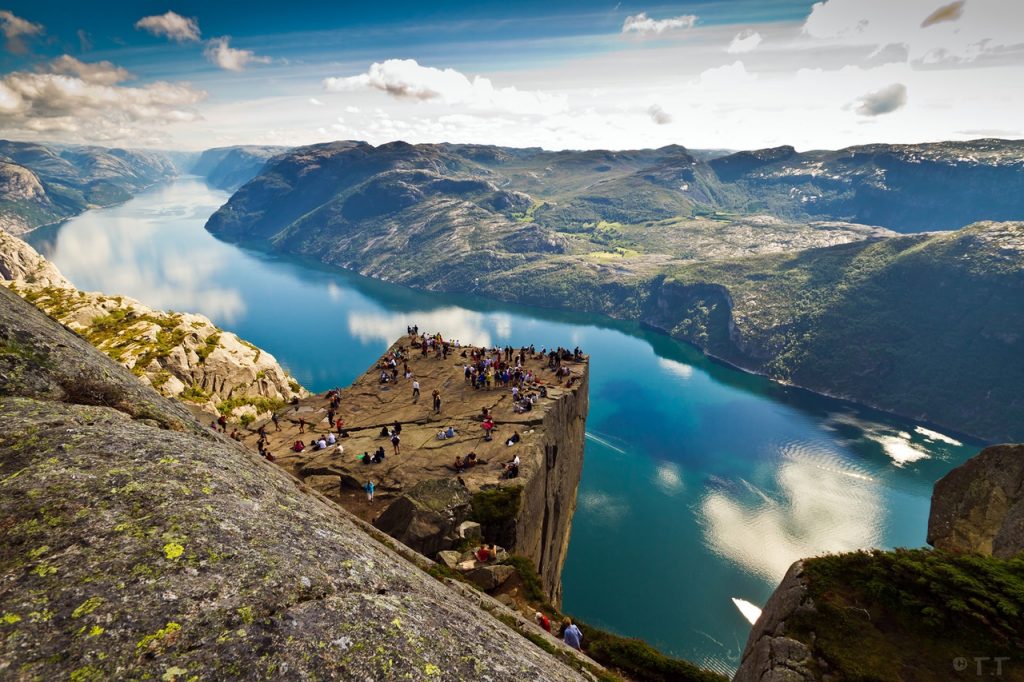 Prekestulen Rock is very popular among tourists – there are many hiking trails as well as the famous viewing platform. An amazing combination: it is located at an altitude of 604 meters above one of Norway’s deepest fjords. The rock is considered one of the most beautiful places in the country. 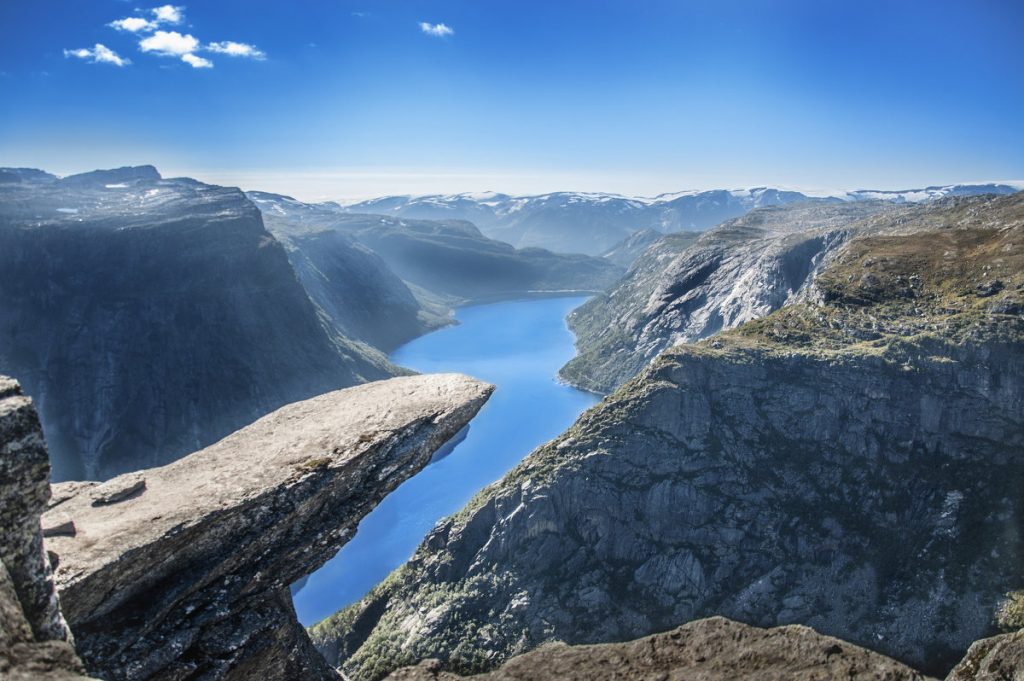 Troll’s Tongue (Skjeggedal) is a rock overhanging the lake Ringedalsvannet. Very dangerous and very beautiful place. Many tourists dream to be photographed here, even standing in long lines for the sake of it. The locals have made up a legend – supposedly, a certain Troll of the Troll family decided to defy the sun and stuck his tongue out of his cave during the day, and the result is now evident.