Ngorongoro – A Natural Park in a Giant Volcanic Caldera

Ngorongoro is a large volcanic crater in Tanzania south of the Serengeti savanna. It is the habitat of many African animals and a large natural reserve.

In general, the reserve covers a huge area (8300 km 2 ) and is part of the Serengeti National Park along with the Maswa Reserve (west of Ngorongoro). But it is its volcanic caldera that has become the jewel of these places. 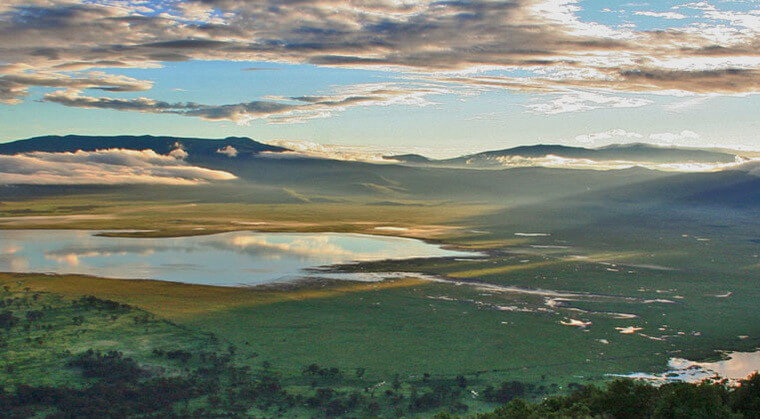 Ngorongoro lies in northern Tanzania south of the Serengeti Reserve, but is actually part of its ecosystem.

Ngorongoro Crater is located on a volcanic highland surrounded by lesser known craters (such as Empacaa in the northeast). The southern and eastern borders are defined by the edge of the East African Rift, which has become a barrier to animal migration in the area. 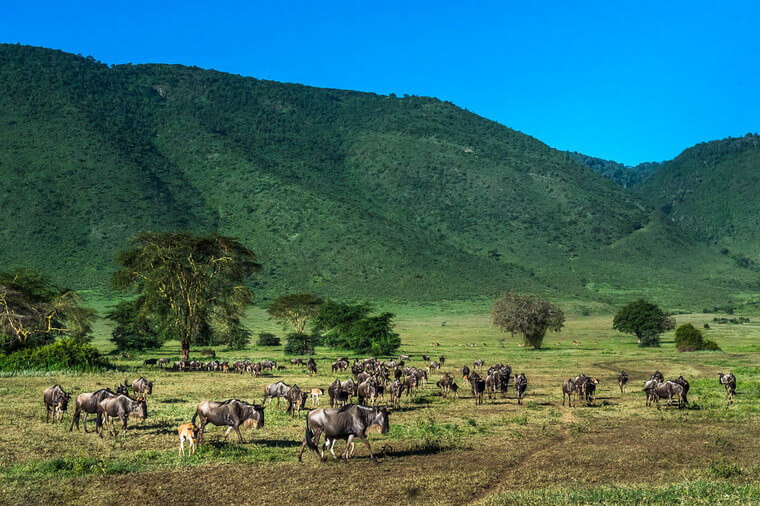 100 km northeast of Ngorongoro is the frightening yet attractive Lake Natron. And 200 km to the east rises the famous volcano Kilimanjaro.

Peculiarities of the crater Ngorongoro

Its shape is supposedly almost round, with a diameter of 17 to 20 kilometers. The maximum depth of the caldera is about 610 meters. But its edges can reach a height of 2286 meters above sea level. The lower part of the caldera lies at 1700 meters. The inner area of the crater is over 260 km 2 . At the bottom you can see the lake Magadi. It is famous for a large concentration of flamingos. 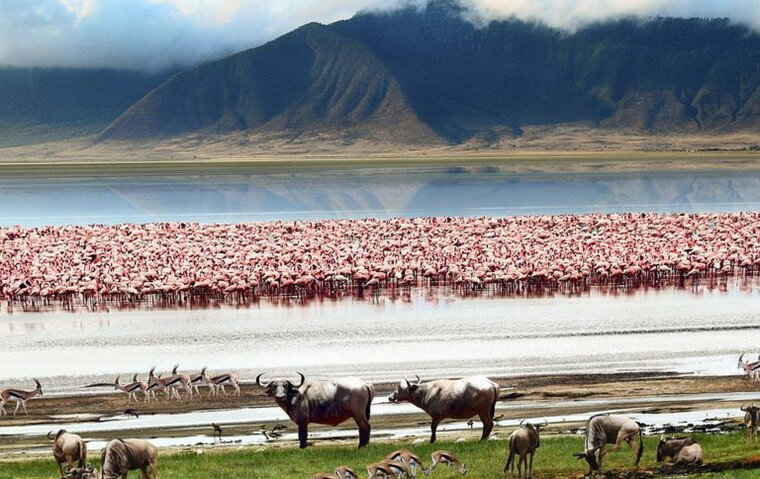 Interesting fact – Ngorongoro Crater is the largest inactive, pristine and unfilled volcanic caldera on the planet.

The main uniqueness of the crater is that over a long period of time it has formed its own habitat for a variety of animals that practically do not go outside the caldera. 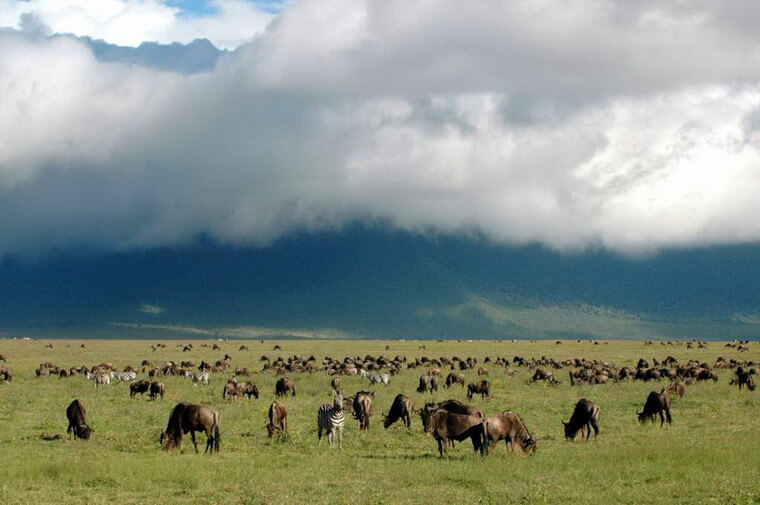 Zebras and antelope in the Ngorongoro Crater

An interesting fact – the Crater Ngorongoro in February 2013 was included in the list of the Seven Natural Wonders of Africa.

Several thousand years ago, aboriginal herders settled here. The Mbulu people came here about 2,000 years ago. A little later they were joined by the Datuga tribes. But at the beginning of the 19th century, the Masai tribes drove everyone out of Ngorongoro and began to actively breed cattle.

Interesting fact – The name Ngorongoro was given to the crater by Maasai herders. There is no mythical and secret meaning in this word. Just the sound of the bells on the local cows was very similar to ngoro-ngoro, hence the name.

It is known that Europeans did not know about the Ngorongoro crater until 1892, when it was visited by the Austrian ethnographer and cartographer Oskar Baumann. 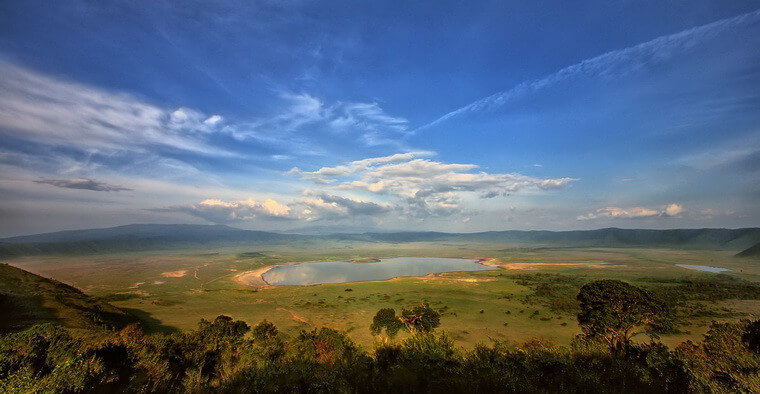 At the beginning of the 20th century, German farmers, brothers Adolf and Friedrich Siedentopf, arrived here. They began to breed cattle and grow wheat. It is noteworthy that the Europeans got along quite well with the locals. They helped each other in raising livestock and in defense against predators. After World War I, the Sidentops returned to Germany. And the Maasai were later actually evicted from Ngorongoro.

In 1959, the area around the crater became the Ngorongoro Protected Area. The Maasai were allowed to settle here and raise cattle. Today, there are up to 60,000 herders in the park and the number of livestock reaches 350,000. This puts an additional strain on the ecosystem. 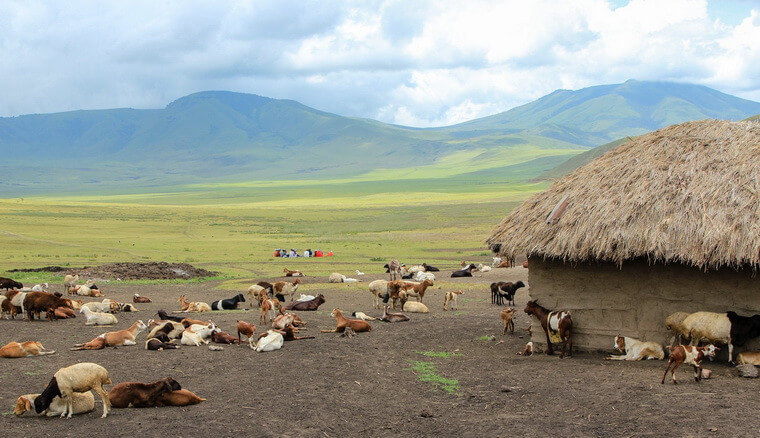 A Maasai village on the edge of Ngorongoro Park

In 1975, agricultural activities in the caldera were completely banned. Since 1979, the Ngorongoro Crater is a UNESCO World Heritage Site and became a Biosphere Reserve in 1981.

Ngorongoro is characterized by large variations in altitude. Accordingly, the climate varies significantly depending on the location. The higher the terrain, the more humid it is and the more often there is fog.

The plain in the center of the caldera is subject to considerable fluctuations in temperature. Here, too, much depends on the specific location. 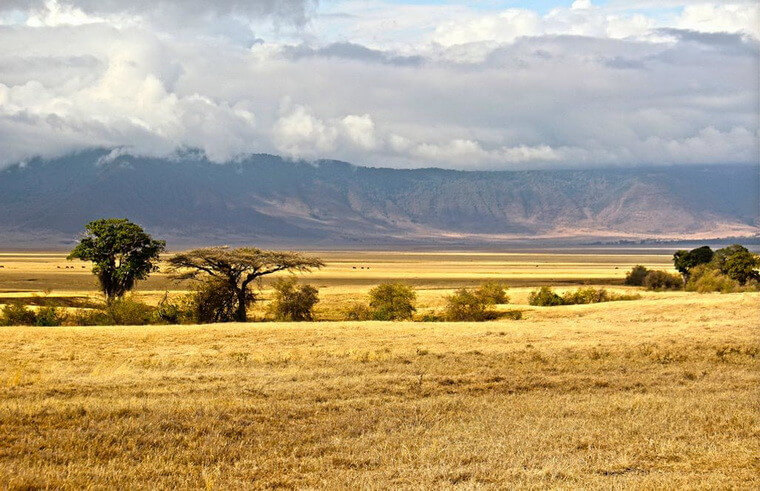 The edges of the caldera are dominated by wet savannah. These areas are covered with shrubs, tall grasses and small evergreen mountain forests. At the bottom of the caldera, the grass is noticeably lower. Thickets of acacia trees can be found.

In the northwestern part there are massive fig trees. These are sacred trees to the Datug and Maasai tribes. There is even speculation that they were planted at the grave of a Datug chief, who died in battle with the Maasai in the mid-19th century.

The Ngorongoro Crater is home to about 25,000 animals. There are many zebras, African buffalo, and a variety of antelope.

Despite the isolation of the region, more than 20% of gnu antelope and more than half of the zebras leave the caldera during the rainy season.

Predators include hyenas, leopards, and lions. Cheetahs are rare.

An interesting fact is that Ngorongoro has the highest density of predators in all of Africa.

Sometimes you can see elephants and black rhinos. In addition, hippos live here, which is not quite usual for such latitudes. But giraffes and crocodiles are not found here. 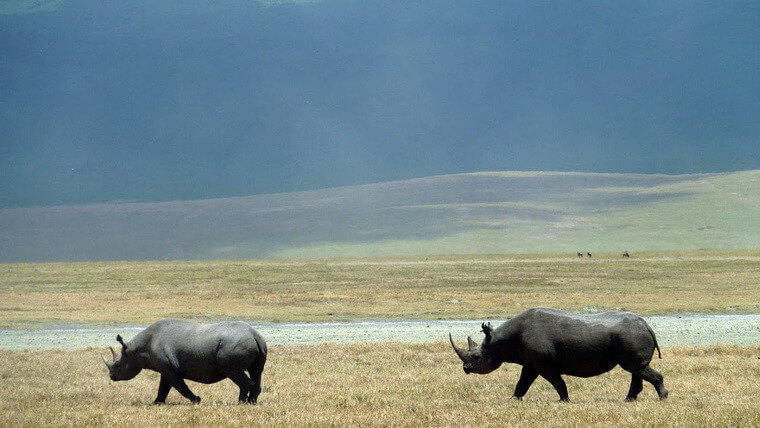 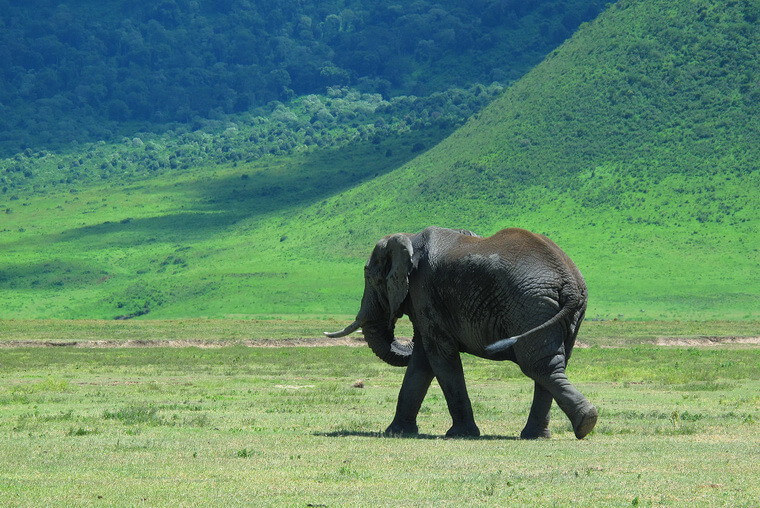 Interesting fact – Each year a mass migration of herbivores passes through Ngorongoro Nature Reserve. More than 1.7 million wildebeest, 260,000 zebra and 470,000 gazelles pass south in this region in December and move back in June.

There is a seasonal salt lake, Lake Magadi, in the southwestern part of the Ngorongoro Crater. It is inhabited by thousands of flamingos, mostly of the “lesser flamingo” species. 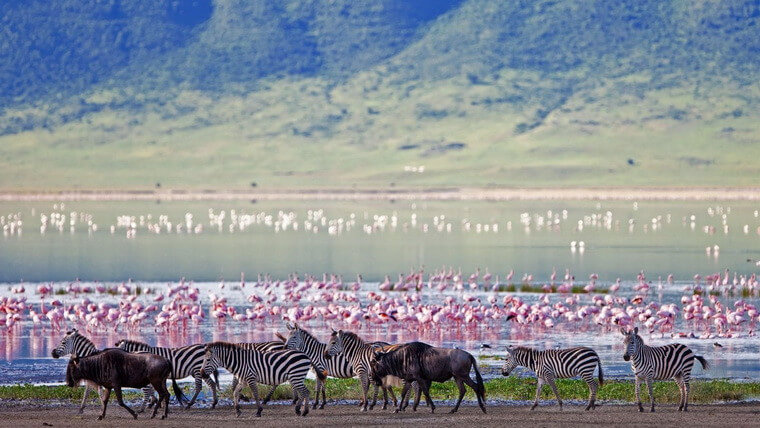 Note that you can see as many as a million flamingos, maybe more, at Lake Nakuru in Kenya.

Munge Creek flows from the Olmoti Crater (north of Ngorongoro). It is the main source of water that replenishes the lake. Another supplier of water to the lake is the Ngoitokitok spring a few kilometers to the east. There is a picnic area open to tourists and a huge swamp fed by this spring.

In addition to the well-known name Magadi, the lake has another name. Makat is how the lake is called by the local Maasai. In translation, it simply means “salt. 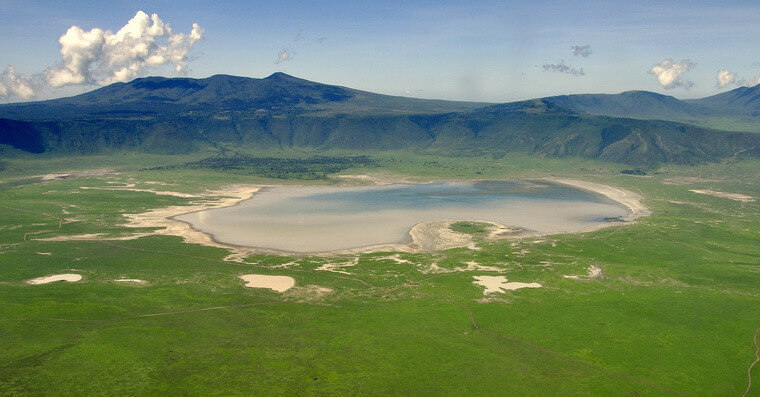 Lake Magadi. View from above

Ngorongoro is the only protected area in Tanzania that protects wildlife but allows people to live here. Land use is strictly controlled to prevent negative impacts on wildlife. For example, large-scale farming is prohibited. Locals are only allowed to cultivate the soil for their own needs.

Interesting fact – The authorities actually displace the local Maasai cattle ranchers, but allow the construction of hotels in the park.

Now in the crater and beyond you will find many cozy hotels offering comfortable accommodation for tourists. 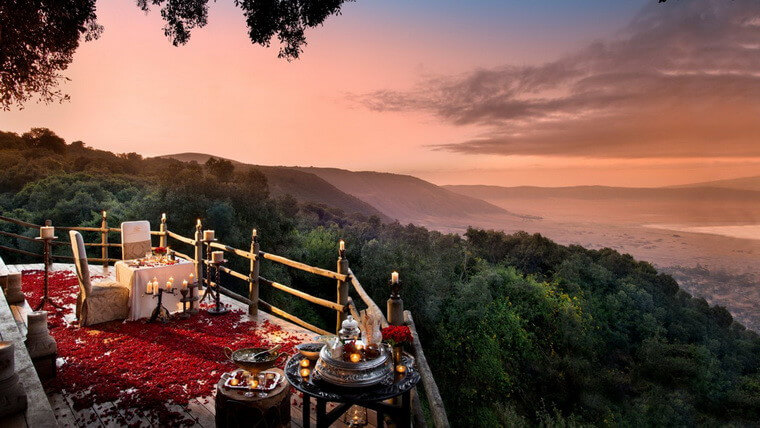 One of the hotels with a view of the Ngorongoro Crater

Naturally you will be offered Ngorongoro safari tours. Among the standard rules of safari tours is the principle “take nothing from the reserve except impressions, leave nothing but footprints”. Of course, we mean footprints on the road, not such traces as on the “paradise” island of Tilafushi.

Since the beginning of the 21st century, the growing number of cars and tourists has become a big problem for the park. About 450,000 tourists visit Ngorongoro annually. This is about 60% of all travelers visiting Tanzania.

When choosing a time to visit Ngorongoro, consider the seasonality.

The rainy season (November to April)

Ngorongoro usually has light rains from November to December and heavy rains from February to April. The rainy season is a very exciting time of year when animals gather on the plains for mating games and rearing their young.

Late February and early March is a good time to see herbivores migrate to the plains. In turn, this attracts large numbers of predators and leads to exciting hunting scenes.

Dry season (May to October).

This time has its own beauty. It is a great season to observe the mass accumulation of animals near small water sources. 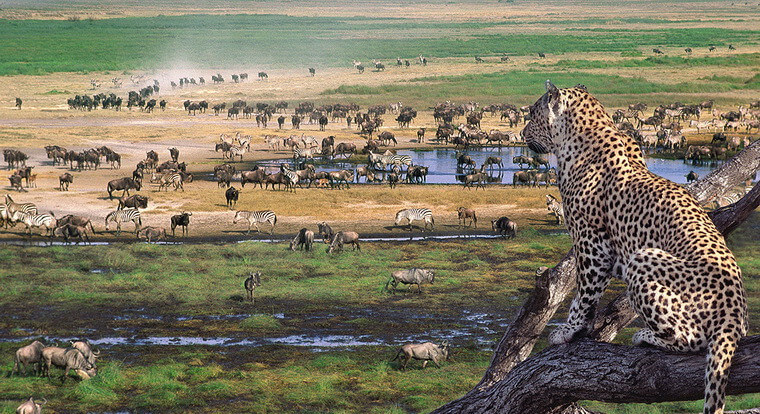 For more information about Ngorongoro Park, visit the official website.

The crater of Ngorongoro is an amazing natural site in Africa, which many rightfully call the eighth wonder of the world.

However, Ngorongoro is a huge crater in Tanzania on the edge of the Serengeti savannah that emerged as a caldera as a result of the collapse of a large volcano about 2.5 million years ago.

But this is not what makes Ngorongoro unique – it is the fact that the crater is an enclosed space where birds and animals live. People appeared here relatively recently, so Ngorongoro turned into a kind of Noah’s Ark, isolated from the surrounding area and now impresses the traveler abundance and diversity of horned, feathered and tailed population.

HOW NGORONGORO WAS KNOWN

Europeans first learned about the Caldera Bowl in 1891 from German scientist Oskar Baumann. But until the middle of the twentieth century this amazing place was visited by zoologists, geologists and explorers of the African continent.

Ngorongoro became popular with tourists only after the books and films of Dr. Bernhard Grzimek, a fighter for the preservation of African fauna, and the Tanzanian authorities established a nature reserve.

THE INHABITANTS OF NGORONGORO

Only large animals in Ngorongoro count about twenty thousand, and mammals in the crater lives up to two hundred thousand: elephants, hippos, rhinos, zebras, buffalo, antelope gnu, cannes and bubala, gazelles Grant and Thomson, bearded boars and water goats, baboons and green monkeys inhabit the savanna and forests of the crater. Predators, too, are found: lions and leopards, hyenas and jackals, cheetahs and wild cat-servals. Most animals cannot leave the crater because of its high “sides”.

There are even more birds than animals: ostrich and African bustard, secretary bird and nosed marabou, pink flamingo and crown-crowned crane, hoopoe, lark and swallow, lapwing and cuckoo. And on the branches of baobabs and acacia trees growing in the savanna, frowning vultures and black African eagles find shelter.

The fertile Ngorongoro Valley was discovered by Maasai herders and they moved here. They pasture their herds here until now, as if time has stopped and nothing changes in the world. They still build their huts with conical roofs and walls plastered with dung, and they still come out one-on-one against lions armed only with a spear.

By the way, the Maasai gave its name to the Ngorongoro crater. There is no mystical and secret meaning in this word. The sound of the bells on the local cows was like ngoro-ngoro.

Ngorongoro has become a nature reserve, and it is open to all comers. The endless bowl with steep walls, slightly twitched by the morning mist, appears to the viewers in all its grandeur. Soon the sun’s rays disperse the fog, and ever-larger patches of green can be seen through it.

From above, the bottom of the crater appears at first glance to be a huge, smooth green carpet. But then you can see small hills and darker patches of forest. When you look closely, you notice the glints of sunlight on the surface of a winding river and two lakes.

While in large national parks in Africa you have to drive several kilometers to see a family of lions or a group of giraffes, in Ngorongoro all wildlife attractions are nearby. Just met a group of elephants and a noisy company of baboons running away from a leopard, drove through the forest, and already before you see the lake Magadi and thousands of flamingos.

Beyond the lake stretches the swamp – a realm of leisurely fat behemoths, crunching sedge.

And overhead in the greenery of the forest, the voices of the birds of the cuckoo, bustard and so on are constantly heard.

In February 2013, Ngorongoro was included in the list of the Seven Natural Wonders of Africa.