New Zealand’s Subantarctic Islands are five isolated island groups scattered in a semicircle 700 km south and east of the South Island, owned by the country since as far back as 1863. All of the sub-Antarctic islands are national reserves, with the highest possible conservation status. All of the groups are accorded World Natural Heritage status, and are valued no less than the Grand Canyon or Everest.

They are wild and beautiful places that are home to both common wildlife and birds on earth, as well as unique ones. Many birds, plants, and invertebrates are found nowhere else in the world. The islands gained special fame because of the large variety of penguins and other seabirds that nest there. In all, there are 126 species of birds, including 40 seabirds, of which five species are found nowhere else in the world. Despite its remote location, the region lures explorers and tourists from all over the world. It is not every year that travelers can get there as part of scientific expeditions on cruise and research ships.

The islands are inhabited by endemic species of animals and birds, among which stand out the Snæhr crested penguin, snipe, petrel, and several species of unique invertebrates. Staying in the territory is prohibited and allowed only in extreme cases with a special permit for research.

Virtually uninhabited from the beginning of the 21st century, the islands still remember the history of attempts to develop them by people. Polynesian sailors, seal hunters from Europe, hermits seeking solitude, military observers, unsuccessful farmers, and scientists who settled there the longest. Polynesian furnaces from the 13th century were discovered on Enderby Island, part of the Auckland Islands, but the Polynesians did not stay long. European explorers first saw the islands in the late eighteenth century. In the early nineteenth century, uncontrolled seal fishing was taking place on the islands.

READ
Cave of Lascaux is a prehistoric art site in France 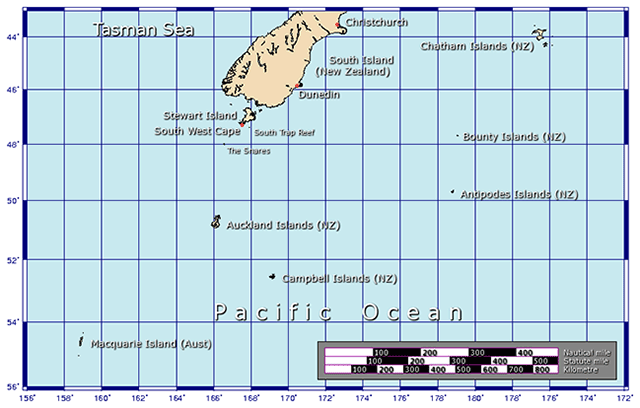 When New Zealand officially became a British colony in November 1840, its boundaries were mistakenly set so that none of the sub-Antarctic islands were included in the possession. In 1842 the Maori of Chatham Island settled in the Auckland Islands, and in April of the same year a supplementary document was issued to include the Chatham Archipelago as a territorial unit of the country.

In 1849 Charles Enderby, an Englishman, hoped to establish a whaling base and settlement of farmers on the Auckland Islands, and in 1850 200 settlers arrived there from Britain. They built a town, Hardwick, but because of the difficulties encountered in farming they left in 1852.

In 1852 the constitution of the country was again changed so that the ownership of Snares, Bounty, and the Antipodes Islands was not in doubt. Finally, on June 18, 1863, the southern boundary was established so that New Zealand had control of the Auckland Islands.

Later there were more attempts to develop the land, but they all failed due to weather difficulties, soil, isolation and lack of transportation. There were about 11 shipwrecks near the Auckland and Antipodean islands, after which they built stores of food in case of force majeure. During World War II there were observers on the coast of Oakland and Campbell Islands, and on Campbell Island there was a meteorological station.

Thomas Musgrave, shipwrecked near Oakland Island in 1865, described in the ship’s log incredible weather conditions in the form of incessant storms, constant hail, snow, and torrential rain. And eighty years later, a meteorologist stationed there in the 1940s concluded that such a harsh climate was not conducive to living in the area. The weather was almost always overcast, accompanied by the strongest winds and a humidity of 95 percent, not suitable for prolonged stay in the territory.

Climate is the main reason for the difficult development of the islands, despite their rich and unique natural environment. The weather on the archipelagos is humid, cold, windy and overcast.

On Campbell there are 280 days a year with winds of more than 63 kilometers per hour, and the sun does not shine for more than 660 hours a year, which is one-third less than the figures for Wellington. For example, daylight hours averaged less than 12 hours in June, and the lowest was recorded in 1970, with 1.5 hours.

READ
The most beautiful castles of the Italian Republic

Precipitation on the islands is not heavy, but frequent. Campbell averages 1,360 millimeters per year. The numbers are similar to New Plymouth. It rains 300 days a year, and the snow does not settle for long. Rainfall is heavier on the Auckland Islands, with more moderate precipitation on the Antipodes. Located between New Zealand and Antarctica, there are small annual and daily temperature variations in the middle of the Antarctic and subtropical climate belt. Average annual temperatures range from 11 degrees Celsius on the Snare Islands to 7 degrees Celsius on the Campbell Islands.

These uninhabited islands in the Southern Hemisphere are some of the last areas in the world to be inhabited by unaffected vegetation. The abundance of plants, incredibly bright colors, demonstrates a unique evolutionary adaptation to the characteristic sub-Antarctic climate and high nutrient levels derived from the abundance of seabirds. 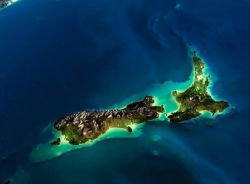 New Zealand is not just South Island and North Island, but also New Zealand’s subantarctic islands – they are scattered over a vast area of 3.5 million square kilometers.

Subantarctic islands are divided into groups, each of which is characterized by a special climate, the presence of unique plants, animals and birds. At the same time, all of the islands included in the group are uninhabited, many of them have restrictions on tourist visits.

Let us briefly recall the largest islands of this island state, which are the South and North Islands. Thus, the South Island of New Zealand is the largest of those that make up the country. However, it is home to about a quarter of the total population of the state. The Northern Island of New Zealand is not as large as the Southern Island, but is home to 75% of the population. It is also home to the largest cities – Auckland is first in size and Wellington, the country’s capital, is second. 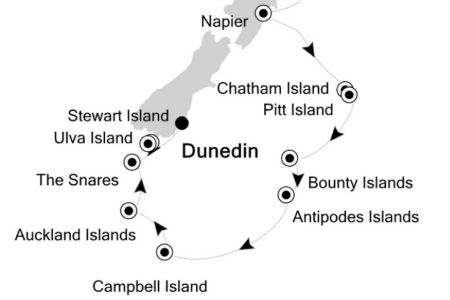 The Sub-Antarctic Islands are not as attractive to tourists as the North and South Islands, but they too have a lot to offer. They include the following groups:

The total area of this group does not exceed 3.5 square kilometers. Its constituent islands do not belong to any administrative territorial unit of the country. A special body was created to govern the group. 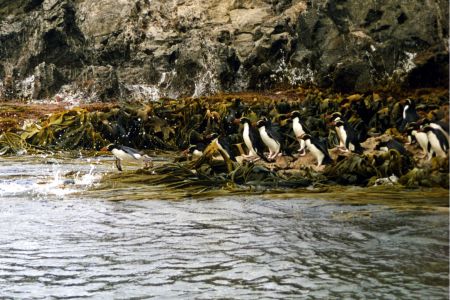 The islands have the following characteristics:

Thanks to the chocolate of the same name, this archipelago is known all over the world. However, if the advertising shows a warm paradise with a hammock in the middle of palm trees, in reality the average temperature in the warmest month (January) does not exceed +11 degrees, and the climate is rather windy.

It is home to many albatrosses, seals and penguins, which enticed hunters at the turn of the 19th and 20th centuries.

The Bounty is uninhabited, with no permanent inhabitants except for the various scientists who come periodically to explore.

Located southeast of the country. Like the other sub-Antarctic islands, they are not included in any administrative-territorial unit, and a special separate body is created for their management. The Antipodes are on the World Heritage List as part of the Sub-Antarctic Islands.

They were discovered in 1800, but, remarkably, not by travelers and explorers, but by the military. The ship Reliance, commanded by H. Waterhouse was on its way to Norfolk, and on the way the crew spotted a previously unknown group of islands.

Only later they got their present name, which in Greek means “Upside Down”, and in this case means the following – the islands are almost diametrically opposed to Greenwich. Interestingly, on French maps, they have another name – Antipodes de Paris.

The climate here is not particularly pleasant, rather, even harsh, but that does not prevent the birds that live on the islands: Antipodes parrots and Rayshek’s cockatiels.

This archipelago consists exclusively of volcanic islands. Not part of any particular area of the state, the archipelago is administered by a special body.

In total, the archipelago includes eight islands (not counting individual rocks and the tiniest islets), the largest of which is Adams.

There is no special vegetation on the islands, only grass and crooked woods – such a feature of the trees is due to the strongest winds blowing almost constantly. By the way, the weather has also affected the fauna – the advantage is the sea animals – seals, elephant seals, penguins.

There are also birds. That is why the New Zealand authorities decided to create a marine protected area on the archipelago. 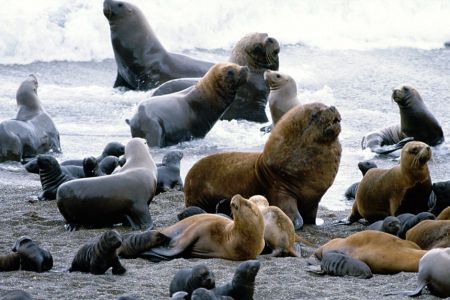 Today no one permanently lives on the islands of Auckland, although attempts to establish a settlement took place in the 19th century, but the harsh climate made them unsuccessful. But the archipelago is often visited by research missions, and in the 1940s there was even a polar station.

These are volcanic formations that are not part of any region of the country and are managed by a designated authority. They are included in the UNESCO World Heritage List.

Unfortunately, they are notorious because their ecology was severely damaged by a whaling ship, which brought rats to the islands and lived there until the early 2000s. Penguins and petrels, which have inhabited the islands for a long time, suffered from them. 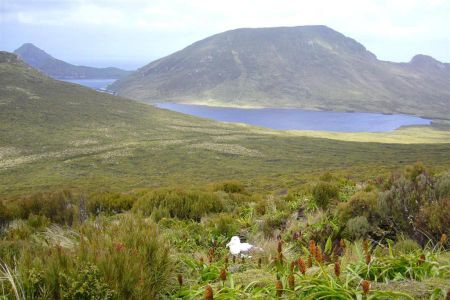 The only tree that grows on the islands is the Sitka spruce. It is believed that it was planted back in 1907, but the harsh, windy climate and not the most mineral-rich soil did not allow the tree to grow taller than 10 meters. Interestingly, it is now the loneliest tree in the world – the nearest ones are more than 220 kilometers away.

As you can see, every island of New Zealand is quite interesting and attractive from a tourist point of view. Even unpopulated sub-Antarctic islands – yes, they have harsh climate, but at the same time they are inhabited by rare animal species, and the landscapes and views make sure that you are on the true edge of the world, after which there is nothing else….. Isn’t that a reason to visit these archipelagos if you have a chance?

New Zealand is an amazing country. It is literally on the edge of the world, it has the lowest level of corruption in the world, the greenest grass and the most national parks per unit area. It’s also where “Lord of the Rings” and “The Hobbit” were filmed.

To visit New Zealand you need a tourist visa. To get it you need to gather the documents and apply to the visa centers of this country. An invitation from the host country or a detailed plan for a tourist trip is also helpful.

South Island is the largest island of New Zealand and one of the largest islands in the world. While many other places on Earth have cities and islands of nature in between, here it is the opposite – there is nature, and among it, towns and villages. The southern island has mountains, fjords, crystal clear lakes, nature reserves and national parks.

New Zealand is a country where nature reigns supreme. Waterfalls and geysers, beaches and glaciers, hills and lakes – this is an incomplete list of its beauty. The country is one of the cleanest countries in the world and at the same time one of the most developed economically, so tourists are waiting here for both comfort and experience.