America’s past and present meet here. Once at New York Central Station, the traveler feels like a participant in a Hollywood movie.

Capital of the world 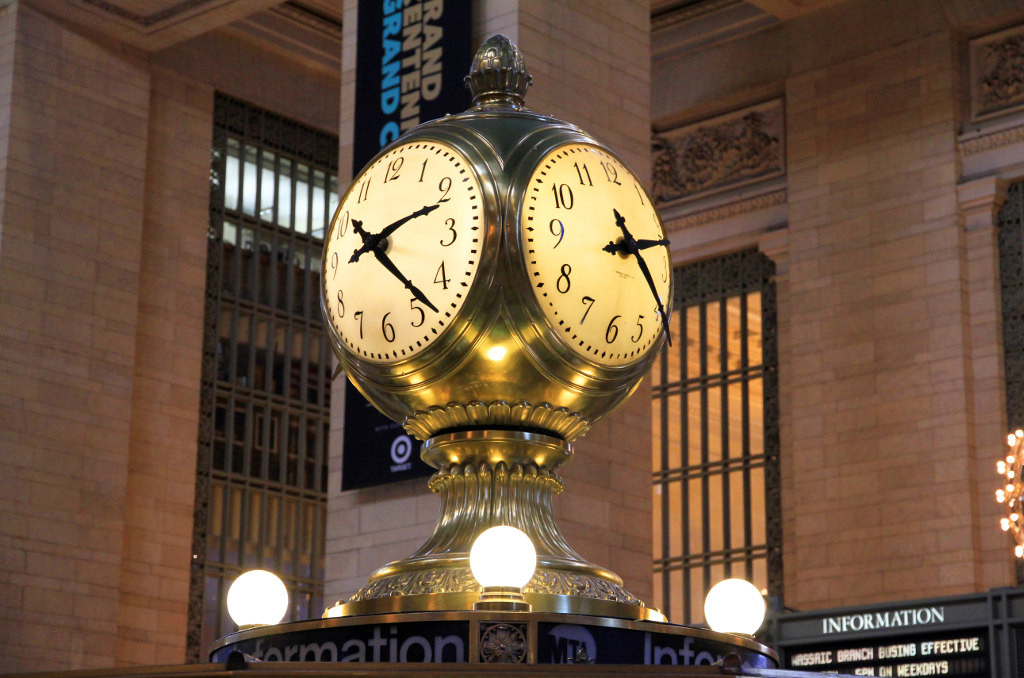 New York is the capital of the world. That’s what Pope John II called it. The city’s population is about 14 million people. In this city on Wall Street the most important financial issues are decided not only in America but also in the whole world. The famous Fifth Avenue, the Empire State Building, the Statue of Liberty, and many other interesting places in this city. But it’s best to start your sightseeing trek at the gates of the city.

The Gates of New York City 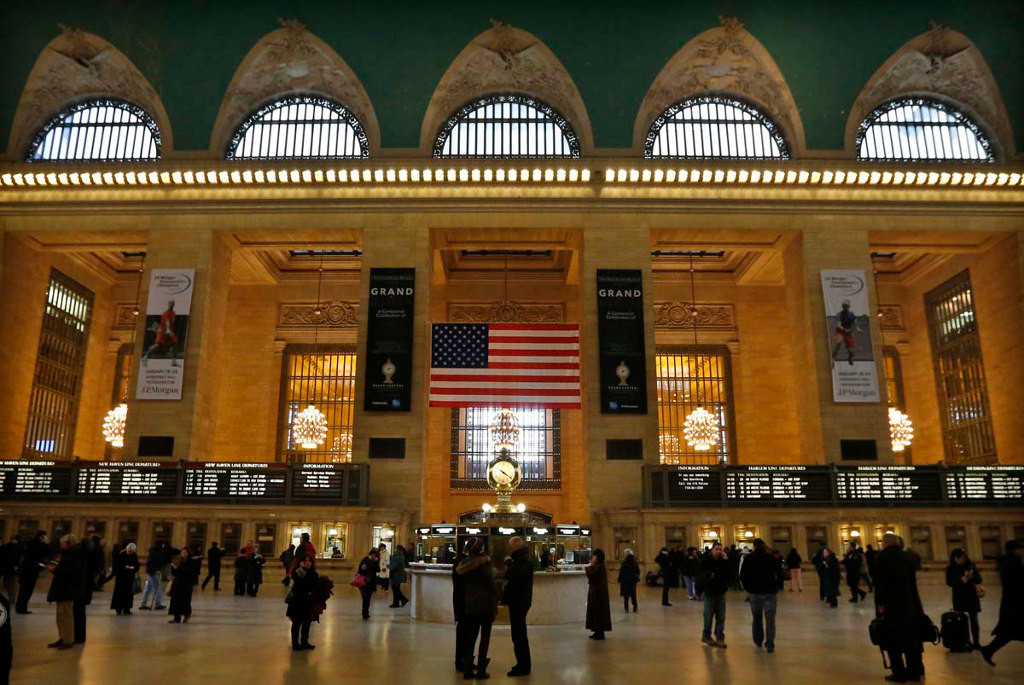 This building is recognizable the first time you look at it because many famous movies and cartoons were filmed here. New York’s Grand Central Station, or as the locals call it, Grand Central, is the largest train station in the world. This building at its construction in the late XIX century was the tallest in Manhattan. Very interesting architectural solution in which the trains leave in the lower floor and their movement does not interfere with contemplation of the beautiful interior of the station. 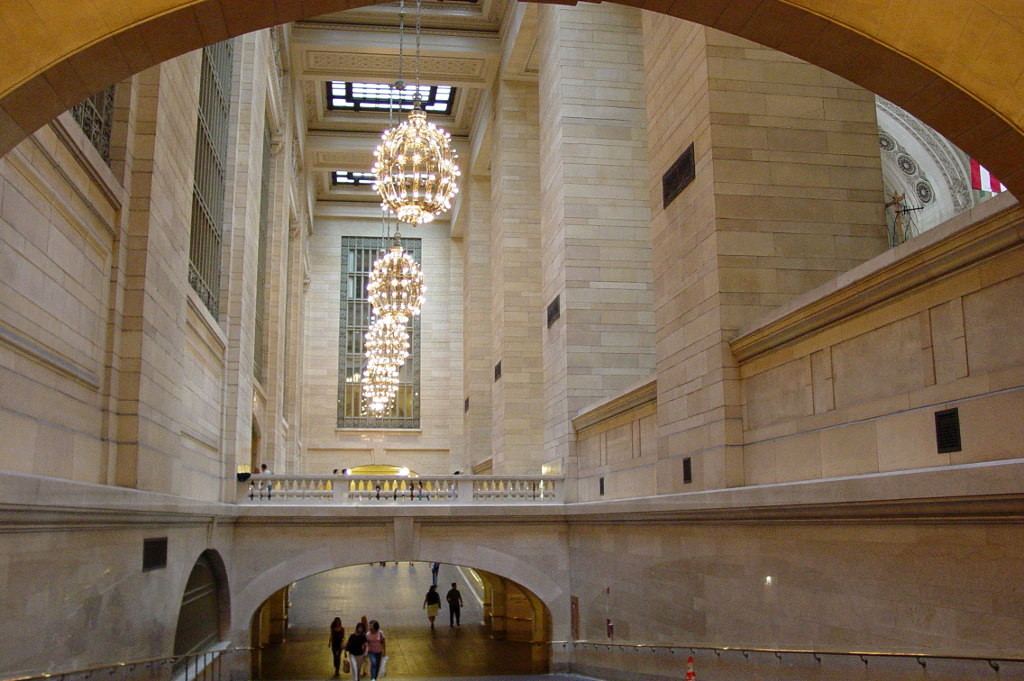 The central hall of the station is astonishing in its gigantic size. Infinitely distant as the sky, the emerald ceiling is decorated with inlays repeating constellations. Mounted lights enhance the resemblance to the starry sky. The central balcony of the lobby became a favorite place for photo sessions. Newlyweds love to have their photos taken here.

The clock in the center is another attraction. Their huge dials are made of opal, so the value of this historical treasure is estimated at millions of dollars. Grand Central is an iconic American place, comparable to the Statue of Liberty. 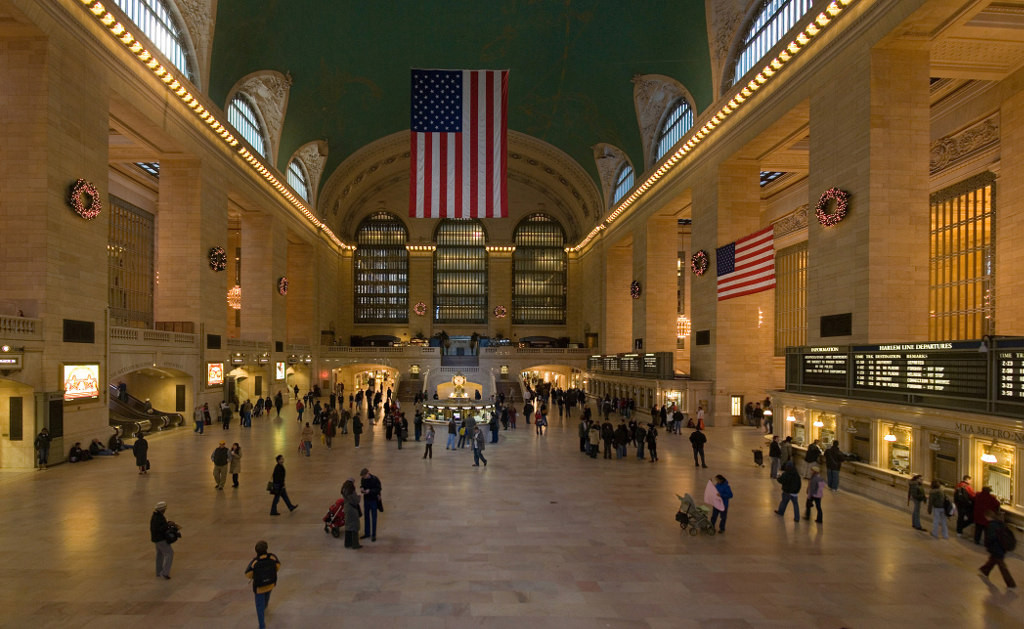 Cleanliness is very carefully maintained here, and if it weren’t for the trains, this beautiful building with its huge windows through which the sunlight pours could be mistaken for a huge museum. It’s worth coming here, even if you don’t have to go anywhere, and watching people from the balcony. Some of them are in a hurry, while others, sitting right on the floor, are waiting for their train. The atmosphere is so democratic that no one here pays any attention to it. 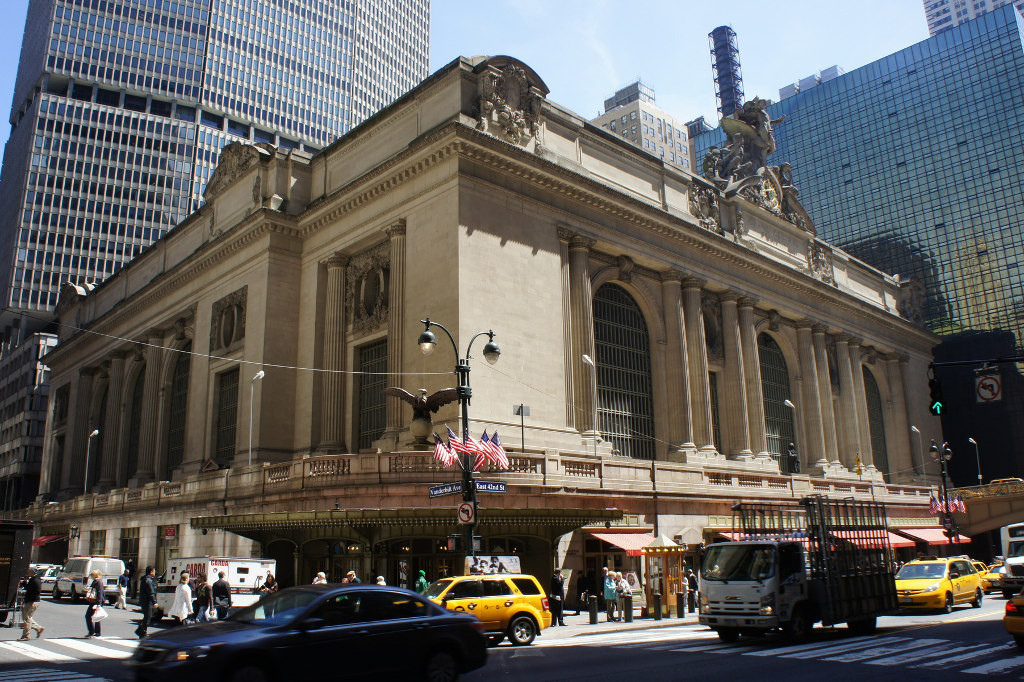 About 750,000 visitors pass through the station every day and only 250,000 of them are passengers. The rest come here just to look at the huge and beautiful lobby, to take a few pictures, to visit the many shops and boutiques, or just to have some free time. For many visitors it is a meeting place. Dates are usually arranged under the opal clock.

Many come here to visit the very famous bar-restaurant Oyster. Before your eyes here you will be cut and prepared the most famous dish of the freshest oysters. The barman will suggest a wine to accompany the seafood, which will accentuate the taste of the dish.

A huge choice of fish and seafood that, moreover, will come to your table very quickly, will leave every gourmet satisfied. This restaurant reminds nothing of a small bus stop. The atmosphere is pleasant and prices are democratic, as well as visitors. No one is surprised to find a Hollywood star in a cap and jeans at the table here. 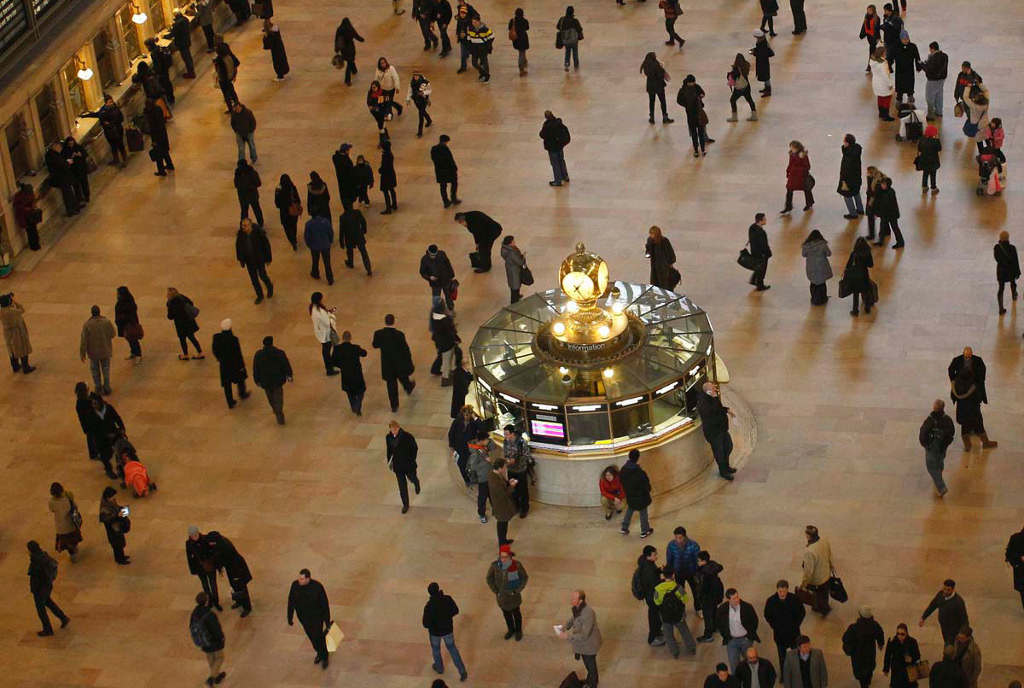 In Grand Central you can make an appointment under the famous clock. Travellers, after a pleasant meal at the oyster bar, at any of the many cafes there, or simply after a cup of coffee at Joe’s, one of New York’s best coffee shops, also located at the station, set out to explore the sights of the big city.

For unobstructed access to many interesting places in New York it will be convenient to buy a city pass, which gives the right to visit a variety of excursions. 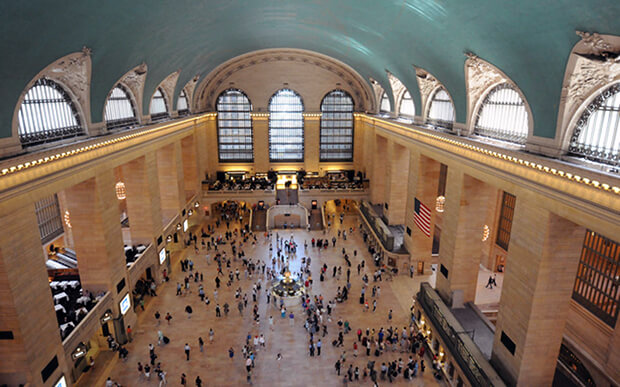 The Rockefeller Center is a stone’s throw away and offers a great view of the Empire State Building. The observation deck is open from eight in the morning until midnight. Nearby are the Museum of Modern Art, the famous Times Square, and Central Park.

Exiting Grand Central Station, you can stroll down chic Fifth Avenue with its famous stores.

READ
The world's most lifeless places

Shopping at the train station 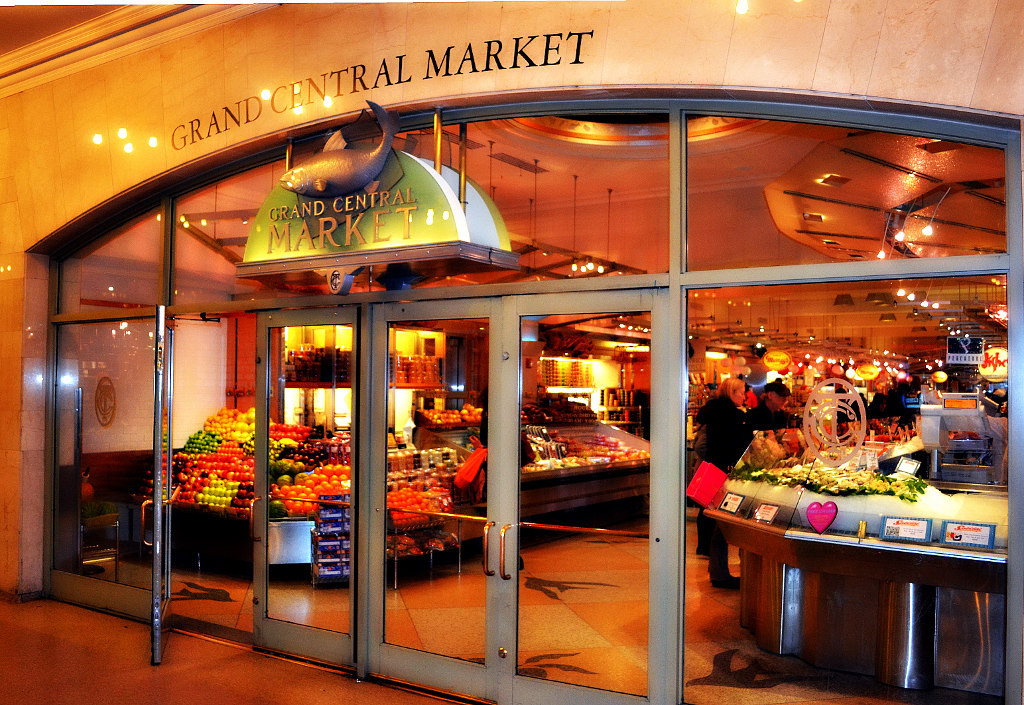 Great shopping can be done right at the station. Numerous boutiques and shops offer a huge selection of goods, from groceries to new products from Apple.

Recently here opened a huge store of the flagship of advanced electronics and technology. The area of the new store is about two thousand square meters. It is much quieter here than in the stores of the same company in the city itself. On weekdays the store is open from 7 a.m. to 9 p.m., which is very convenient for visitors. On Saturday and Sunday the working hours are from 11 am to 6 pm. 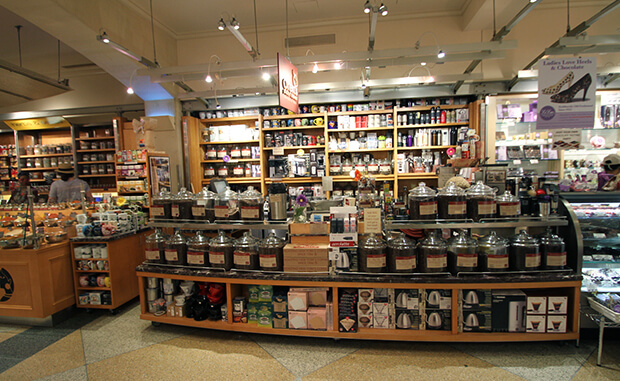 During the Christmas holidays, the station becomes a place for various fairs and performances.

It can be useful. 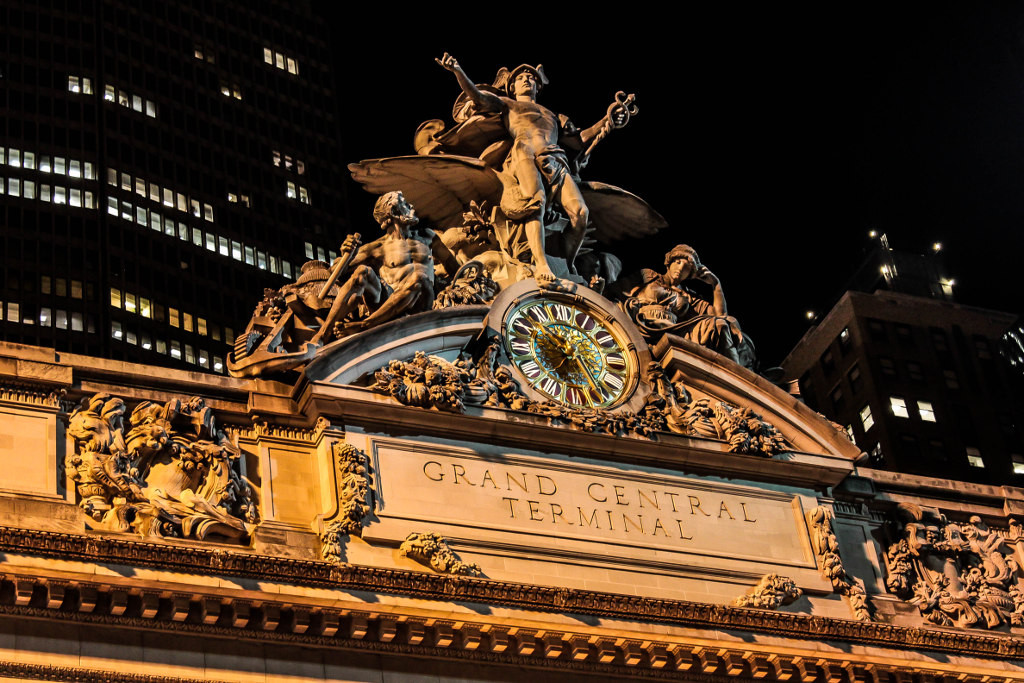 For the self-contained traveler who gets around all the sights on their own, the train station can serve as a great place to rest. Here you can not only have a meal and give rest to tired legs. Along with beautiful interiors that are admirable, there are free toilets, which sometimes comes in handy.

Crime in New York, as in any big city, forces the traveler to be cautious in behavior. The main thing is not to take a lot of money with you, stay away from dark streets and do not ride alone on the subway, especially in the evening.

How to get there on your own 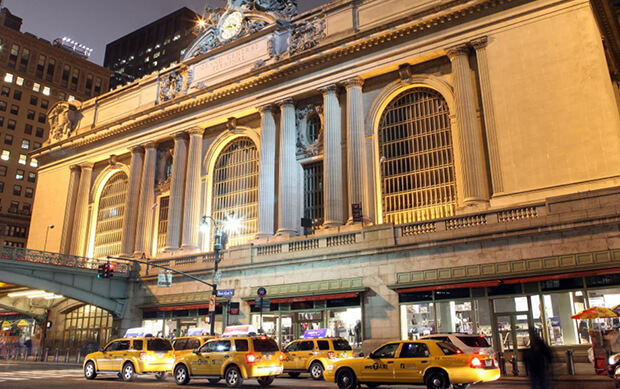 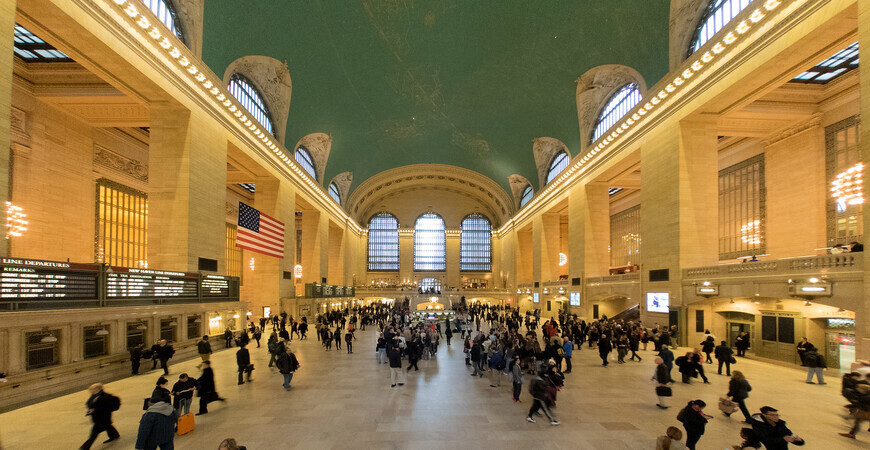 Grand Central Terminal or New York Central Station is located in the heart of Manhattan, at the intersection of 42nd Street and Park Avenue. The hub serves only northbound commuter trains and is considered one of the busiest in North America, second only to Penn Station and Toronto Central Station.

READ
Recreation in Makhachkala in summer

New York Central Station is also an architectural landmark – a visit to it is on most city tours and “must-see” lists for tourists. The luxurious lobby of Grand Central Terminal is known from movies and television series.

The main lobby on google panorama:

In addition to the rail infrastructure – ticket booths, information desks, platforms, etc. – boutiques with clothing and other merchandise are open inside the complex, and there is a grocery market. On the lower level there is a restaurant courtyard.

Grand Central Terminal serves several thousand passengers daily, with an annual flow of more than 67 million people. Electric trains depart every minute, daily from 05:15 to 02:00. The station has 44 platforms (67 tracks), of which 43 tracks receive passenger trains.

The schedule of trains to and from Grand Central Station in New York City can be found on the MTA (Transportation Authority of North America) website.

Buy a ticket from the Grand Central Terminal

Ticket sales for Northern Railway trains are not only handled by the ticket office, passengers have access to special machines in the waiting room.

Also you can buy a travel document through the application MTA eTix (Apple Store and Google Play), directly in the car or order by e-mail.

It’s worth noting that online tickets and tickets purchased in advance are cheaper than those purchased right before the trip. To calculate the exact price go to the MTA website, in the “Schedule” section select the start and end station, the date of your journey and click “Search”. The system will show you the prices of tickets for different categories of passengers.

There are three main lines from New York Central Station:

Below is a route map with all the stops. See its interactive version here.

Grand Central Terminal is associated with important historical events: the main hall was used to watch space flights on a huge screen, it was visited by famous politicians Robert F. Kennedy, Calvin Coolidge and Harry S. Truman, a memorial service for Jacqueline Kennedy and other mass events were held here.

You will learn more interesting facts about New York Central Station during the tour. Experienced guides will tell you about how this magnificent structure was wanted to be demolished in the 1960s, will introduce the features of architecture and show the “whispering” gallery.

To get to the station, take buses or the metro. You can also rent a car or catch a cab.

There are NYC Airport Express buses to the city’s main airport, John F. Kennedy Airport, and to LaGuardia Air Hub. For a schedule of flights with stops and ticket prices, click here.

There are other options for how to get to John F. Kennedy Airport by subway and train:

The route to Long Island MacArthur Airport also goes through Penn Station. From there, the Ronkonkoma train will take you to the station of the same name, from which shuttle buses run to the terminal.

A special Newark Airport Express bus will take you to Newark Harbor from Grand Central Station. Look on the carrier’s website for more information about it.

Both hubs are in the same neighborhood, and the distance between them is about 2 kilometers. It will take 25-30 minutes on foot and 15-20 minutes by Q32 bus.

Tourists often use cabs to get around the city. Calling a car with a driver is easy – just download the mobile apps Uber, Lyft, Curb, inDriver or Juno.

If you need to get to the airport, a neighboring city or a remote area, a transfer from KiwiTaxi will do.