On the cold shores of Antarctica, near the Antarctic Peninsula that aims its sharp beak toward South America, the volcanic range of the South Shetland Islands is located. Their intricately rugged coastal steeps are painted in two colors: black and fugitive. Snow drifts cover the blued crust of the basalts as far as the water, and glaciers are perched on the mountainous median parts of the islands.

It seems that an eternal and sullen, mournful peace reigns in these harsh lands. But one, the smallest island, Desepshen, boldly breaks the silent importance of the gloomy archipelago. Here, in the kingdom of ice and frost boldly rushes element of the fiery bowels of the Earth, and disembarking from the cruise ships travelers can see with their own eyes the southernmost (apart from the Antarctic volcano Erebus) hotbed of active volcanism on the planet.

Deception Island itself is the remnant of a huge volcano, the cone of which, destroyed by the explosion, disappeared, resulting in a giant caldera depression fifteen kilometers in diameter. The rugged edges of the caldera protrude from the water to 200-500 meters, and in the middle, where the crater is, there is an almost round-shaped bay, sheltered from storms and connected with the ocean by a strait half a kilometer wide. From an airplane, Deception resembles a large C letter written in black ink on the gray-steel surface of the ocean.

The perfect natural harbor has long been fancied by whalers. They discovered the island in 1820 and used it as a base for repairing ships and cutting whale carcasses for over a century. It was not until 1931 that the last whaling schooner left Port Forster (as the crater bay was called). But soon came the time of an active offensive of world science on the unexplored ice continent, and on Desepshen in 1944 landed first English scientific landing, then, in 1948 and 1955 – Argentine and Chilean polar explorers.

READ
Florence, Italy: A guide to the city's most beautiful museums

And they were attracted here not so much by the convenient bay, but by a more serious reason: the active volcanic activity on the island, observed by the sailors, who visited it earlier, starting from 1842.

As stated earlier, all of the South Shetland Islands are of volcanic origin. In particular, Penguin and Bridgman Islands, neighboring Deception, are also young volcanoes, but they are already extinct. However, in the early years of scientific observations, the activity of Deception was manifested only in the form of fumaroles, which were breaking through here and there. However, in November 1967, the island suddenly came to life. Its surface began to shake visibly from the tremors, and scientists realized an eruption was imminent.

After months of preparation, Pluto showed its character. On the northwest shore of the bay, right next to the Chilean research station, the bowels opened up and ash and small volcanic lapillary bombs began erupting from the two craters that formed there.

After a ten-minute “artillery drill,” the volcano seemed to calm down, but two hours later it erupted again. Lightning flashed incessantly in the clouds of swirling volcanic ash. The lumps of molten lava, shooting out of the fiery vents, cooled in the air and flattened into loaves of black bread with cracked crusts. They thundered into the ground, easily penetrating walls and roofs. The Chileans hurriedly left the station and moved to the British base, located at a safe distance, and then all the scientists were evacuated by helicopter to the research vessel Shackleton, standing off the island.

Ten days later, the crew of another research vessel in the bay discovered an island a kilometer long and 400 meters wide emerging from the water. It rose sixty meters above the surface of the bay and was surrounded by a cloud of steam. The youngest island on Earth was so called – “New”. However, three years later a new eruption turned it into a peninsula.

When a year later, scientists again landed on the island of Deception, they saw in the northern part of his six craters ranging in size from 25 to 220 meters across. The ash layer at the site of the burned Chilean base reached half a meter. Even at the opposite end of the island from the craters, volcanic bombs up to two meters in diameter were found. One can only guess at the cataclysmic events that raged on the ice-covered island during the depths of the polar night.

February 1969 saw a new volcanic eruption. It began again with tremors that lasted for eight days and was followed by ash and bombs that forced the British to leave their huts and seek shelter under the nearest rocks. The polar explorers, hurrying for shelter, had to dodge ten centimeters of glowing lava pellets as they flew overhead.

Part of the glacier near the crater melted, and a powerful stream of water mixed with ash rushed into the bay, sweeping away tractors and tanks with fuel on the way. This time the English were helped by the Chileans, who welcomed them aboard their scientific vessel. After the eruption, a gigantic four-kilometer-wide, fifty-meter-deep fault was formed on the east side of the Desepchene. It cut the largest glacier on the island, Black Glacier. Above the rift were clouds of smoke from the numerous fumaroles at the bottom of the rift.

In 1970 a third eruption was recorded. This time there was a tremendous explosion that changed the topography of the island and the shape of Port Forster Bay. Part of one of the glaciers evaporated, and in its place a rounded crater a hundred meters deep emerged. It was up to 300 meters in diameter! Many valleys were filled with ash, and on the glaciers its layer reached two meters Around the coast rolled volcanic bombs up to two and a half meters in size A total of thirteen new craters were found on the island, and in some of them formed hot lakes with a diameter of 500-750 meters Water in them was poisonous greenish-yellow color, The restless volcano island was always inhabited by penguins, who lived in four big colonies on the outer shores of Deception and often wandered into the island’s bay During the eruptions at least half of the several thousand penguins died, A month after the catastrophe, scientists on the island discovered a dying penguin, apparently doused in a jet of boiling water from an underwater fumarole.

READ
Raja Ampat Islands, Indonesia. When to visit and what to see

The extent of the volcano’s recent activity is impressive. Wind-borne ash fell on all the islands of the archipelago Some subglacial craters melted through the glaciers, and the ice evaporated Even six months after the eruption, the ground near the craters was so hot that it burned your feet even through the soles of your shoes.

In the last thirty years, the volcanic island, having discharged the energy accumulated in the bowels of the earth, seemed to have tamed its violent temper Only smoking fumaroles and numerous hot springs remind of the catastrophic events that shook it in not so distant times.

Now it is eagerly visited by cruise ships, landing in Port Forster Bay crowds of tourists, attracted by the unusual shape of the island and its turbulent biography And although even in December and January (at the height of the Antarctic summer) the temperature does not rise above five degrees, many thrill-seekers eagerly bathe in the hot lakes of Deception and in natural baths on the beach, warmed by hot breath of the bowels.

The underwater fumaroles in the island’s bay are working properly, and often swarms of Antarctic shrimps, which we usually call krill, accidentally caught in the streams of boiling water, are carried by the waves to the shore in the boiled form.

Such is the unusual appearance of this distant island – an island of contrasts, an island of disasters, an island of glaciers and penguins, black rocks, volcanic bombs and hot lakes in menacing volcano craters among the cold waters of the widest and southernmost Drake Passage in the world.

Deception Island is unparalleled in the world. The ring-shaped island is actually the top of a volcano, a caldera. This unique Antarctic oasis is located in the South Shetland Islands, north of the Antarctic Peninsula . The caldera is about 15 kilometers in diameter. It has a narrow entrance on one side only. The channel is called Neptune’s Mechs. Through this spectacular passage ships can swim into the submerged crater.

READ
The 20 most beautiful places protected by UNESCO 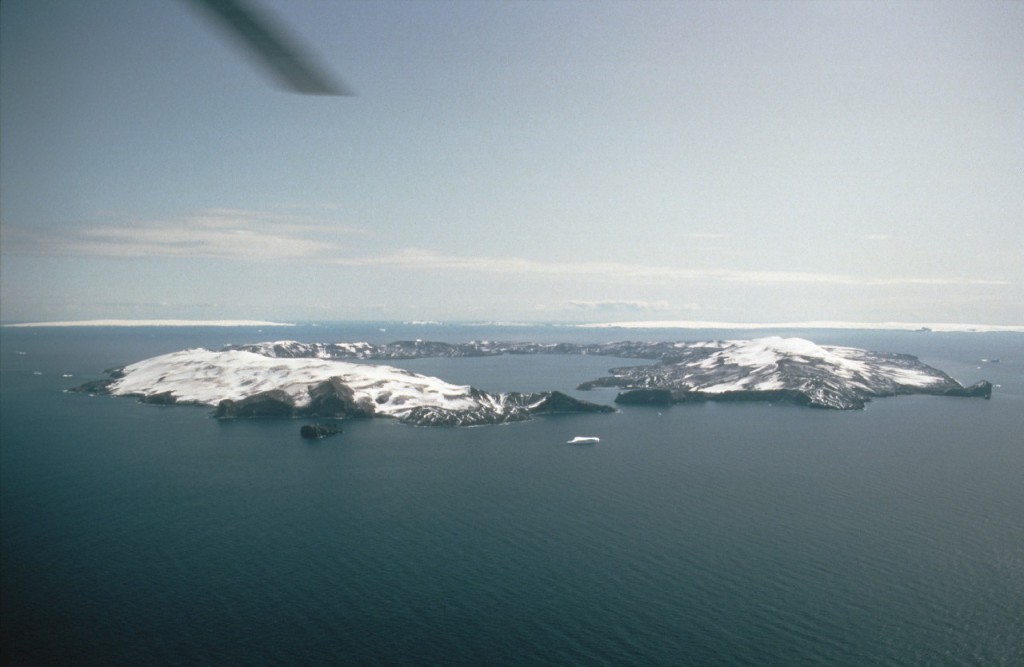 The volcano of Deception Island is still active, with geothermal activity inside the caldera. The seawater temperature is 70 °C. The eruptions occurred very recently, in 1970. Seal hunters, whalers, explorers and scientists have been frequent visitors to the island since its discovery in 1820. The remains of some expeditions can still be seen here.

In Whalers Bay you can see discolored whale bones, wooden barrels and other artifacts of 20th century whale hunters . They are near the abandoned buildings of the British Research Station, which was evacuated from here after the 1969 eruption. 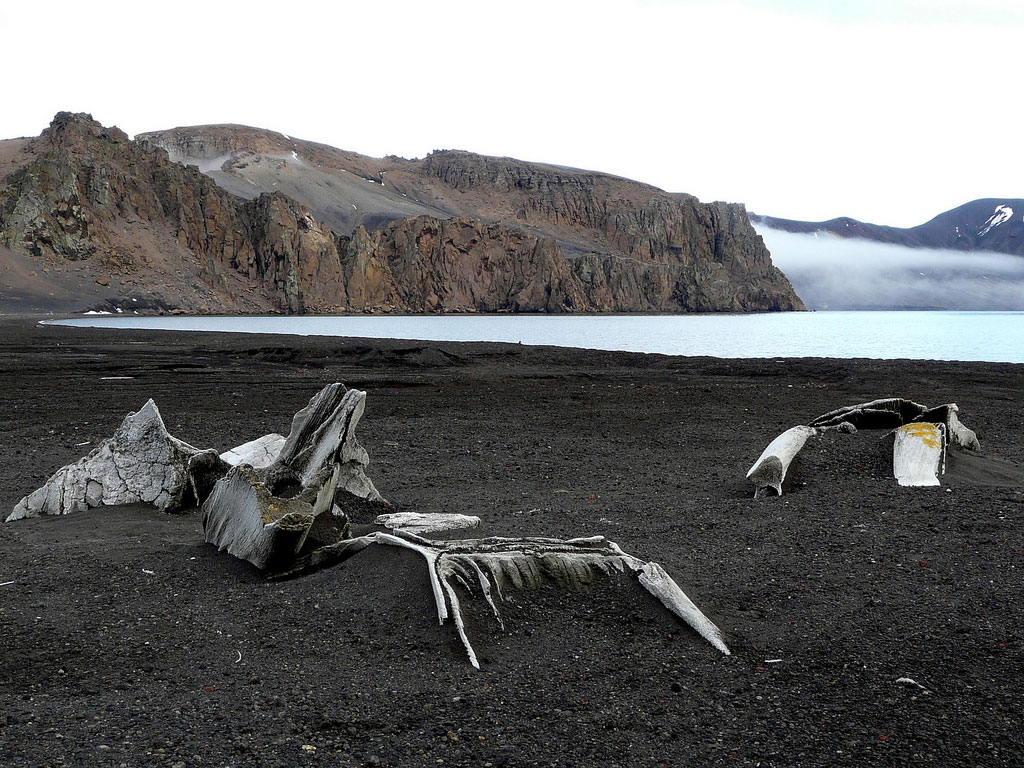 One of the island’s most striking landmarks can be found on the outside of the island, Bailey Head . This natural amphitheater is home to about 100,000 Antarctic penguins. Unfortunately, their colony is rarely visited by tourists due to difficult landing conditions on the outer radius of the island. 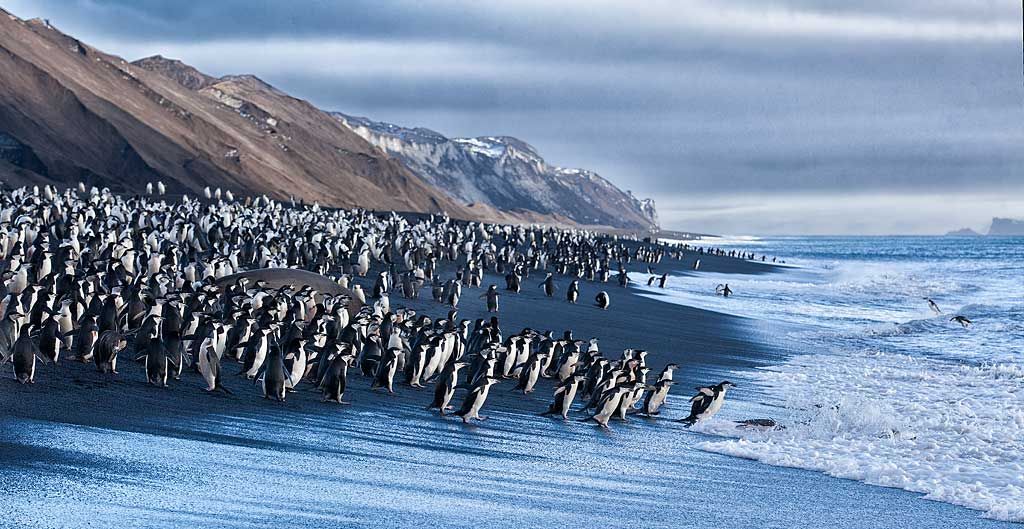 Although the wildlife inside the caldera appears to be less abundant, the island’s shores and cliffs are home to thousands of Capelin, Black-bellied Petrels, Wilson’s Puffins, Dominican Gulls, South Polar Skuas, and Antarctic Terns. In addition, penguins and seals sometimes venture through Neptune’s Mechs into the caldera, where they can enjoy a swim in the thermally heated water. 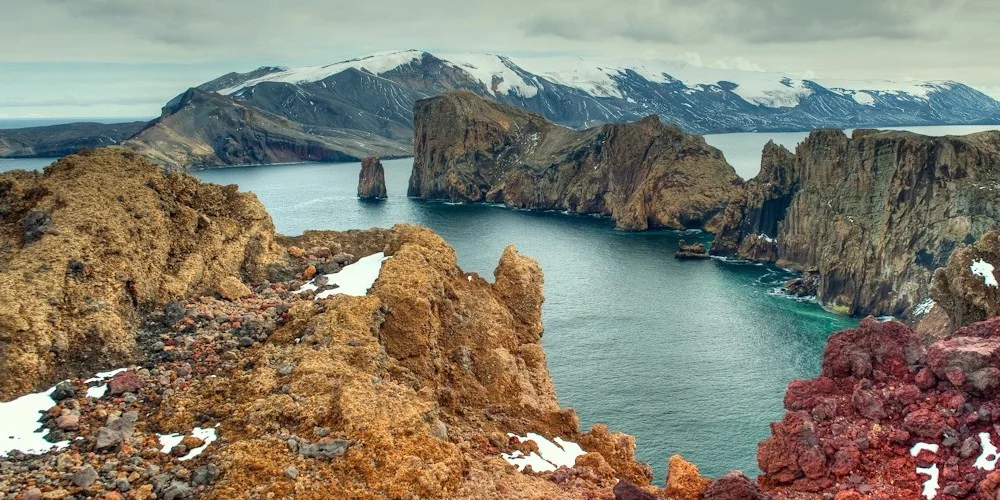 Whaler’s Bay and Pendulum Bay are shallow, so this is where tourists like to swim at low tide. But be careful: most of the time one side of your body will feel like it’s being boiled, while the other side will be almost stiff from the cold sea water. 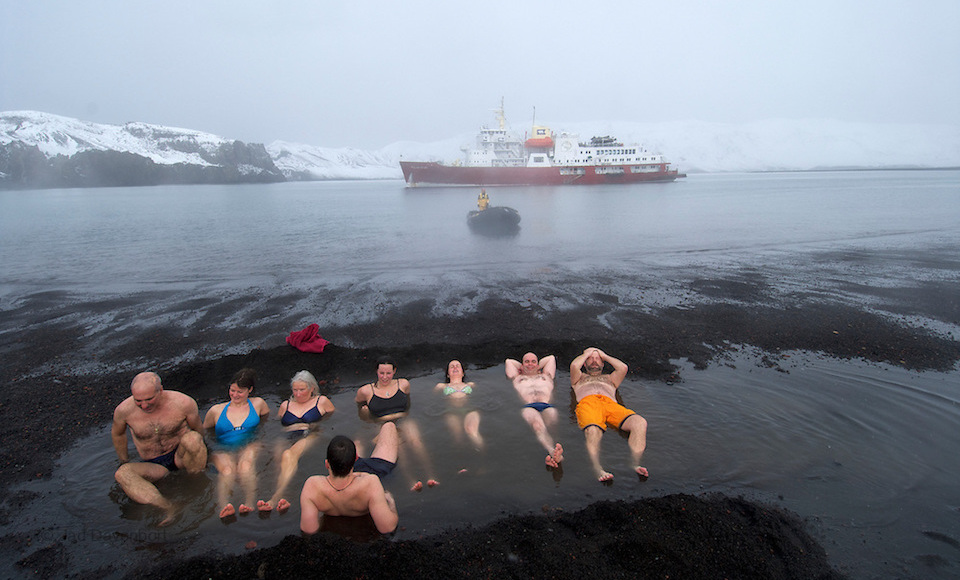 Unlike many other parts of Antarctica, Deception Island is not completely covered in ice, so it offers great hiking opportunities for hikers. From Whaler’s Cove you can make a great hike to the lookout point located in the southeastern part of the island . From the 130-meter summit you have a great view of Port Foster and the small stone pillars, nicknamed “sewing machine needles.” In addition, Telefon Bay, located in the northwestern part of Port-Foster, offers great hiking opportunities around the volcano crater. The eruption of the volcano in 1970 created a lunar landscape with a crater of extraordinary beauty. 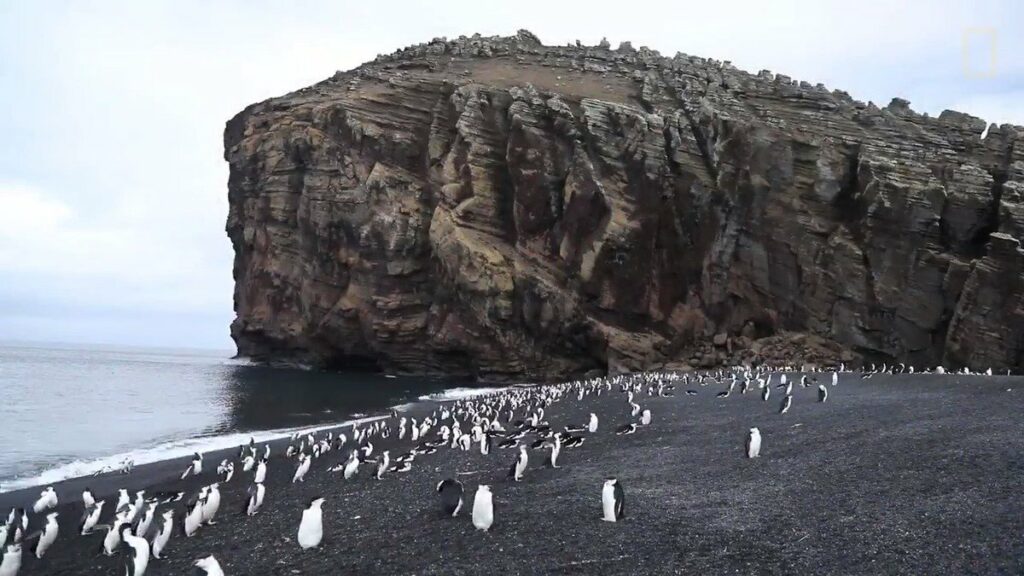