What to see in Cyprus 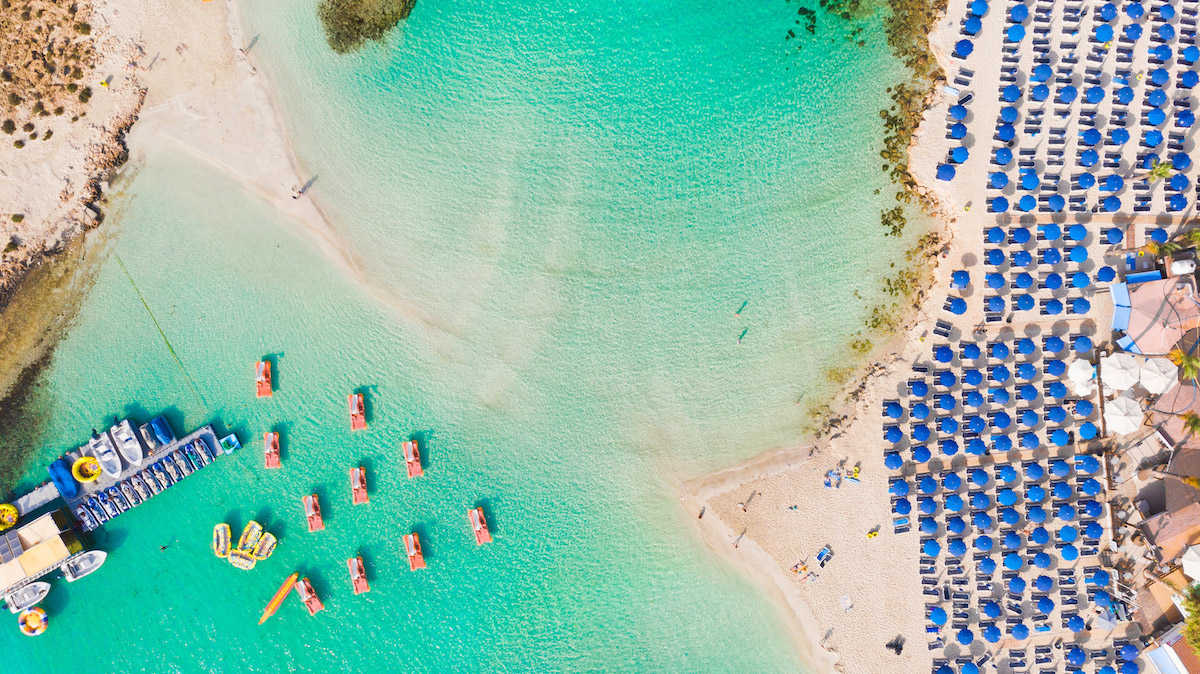 There is an amazing island in the deep blue waters of the Mediterranean Sea. Here ancient ruins meet ancient legends, sandy beaches alternate with rugged cliffs, and Orthodox shrines with medieval castles. Cyprus has a lot to offer to its guests and what to surprise them.

The island is divided into two parts – South Cyprus and Northern Cyprus. The northern part of Cyprus is annexed by Turkey. More than half a century has passed since the military clashes, and today the status quo is maintained on the island. Attractions of Cyprus are located in both parts. Most tourists visit only the southern part of the island, which is certainly a great omission. Do not deny yourself the pleasure of visiting both Cypriot and Turkish territory.

There are several resorts in Cyprus, which are very different from each other. Ayia Napa – is suitable for youth recreation and fun with a large group. Larnaca and Limassol are perfect for a quiet family vacation with children. Protaras is a great choice for a quiet and secluded vacation in the lap of nature.

What places to visit in Cyprus

The choice of the list of attractions to visit in Cyprus depends not only on the specific preferences of the tourist, but also on the resort. However, this does not mean that it is impossible to visit all the interesting places, because Cyprus is a small island, which can be completely passed in one day by car. 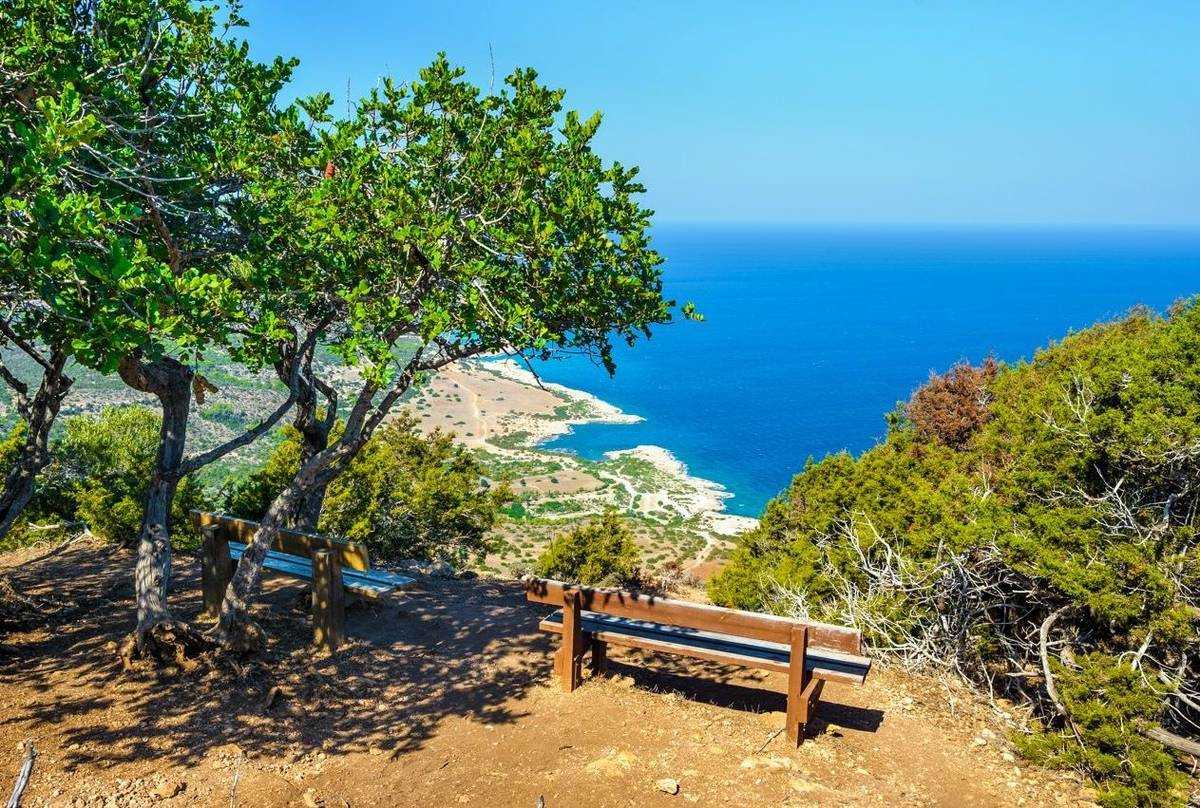 The rugged and windswept Akamas Peninsula was the site of the National Park. It is one of the last few wild places untouched by civilization. Cypriot endemics such as cyclamen, turtles and Cypriot owls grow and live here. Ecotourism thrives in the national park. Travelers come here to walk the Aphrodite’s path, overcome the Avakas Gorge, swim in the clear waters of the Blue Lagoon and, of course, to rejuvenate in the Aphrodite’s bathing pool. Lara Beach has become a favorite place for sea turtles to breed. Their clutches are carefully guarded by the staff of the national park.

READ
10 ideas for trips to Naples with kids, Italy 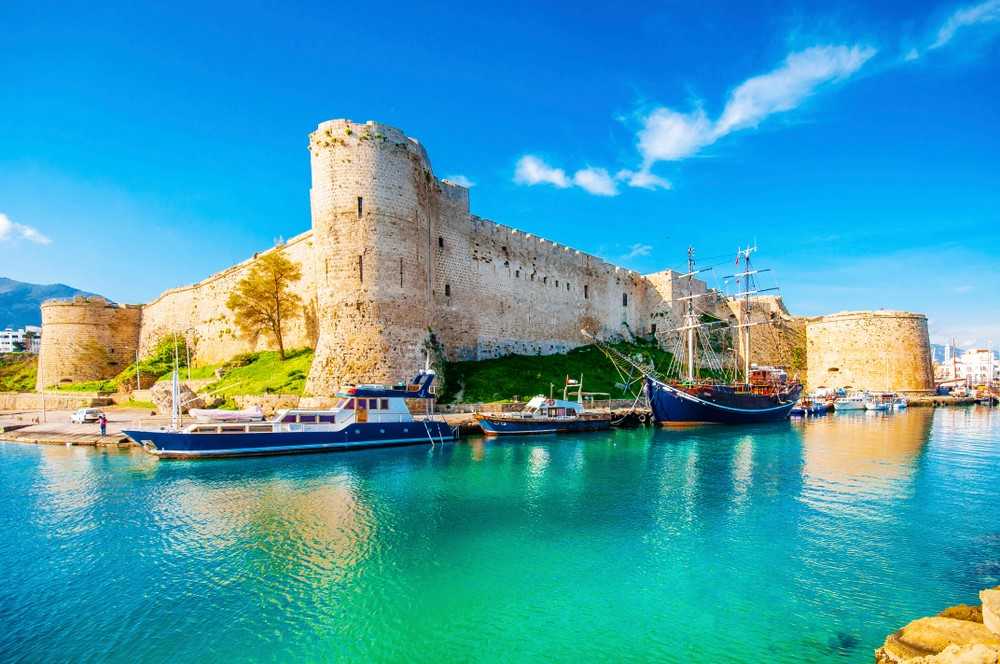 Kyrenia is situated at the crossroads of trade routes and was of great strategic importance in ancient times. The first settlement in this area dates back to the era of Ancient Rome. From that moment begins the military history of the city. First the Greeks, then the Byzantines, Venetians and Ottomans were engaged in building fortifications. The main point of this program was the fortification of the Cyrenian castle. The formidable walls of the citadel are still striking. Today there is a museum where you can not only wander around the fortifications, but also see unique artifacts. Don’t miss the Kyrenia ship, which was raised from the bottom of the sea and dates back to the 4th century BC. 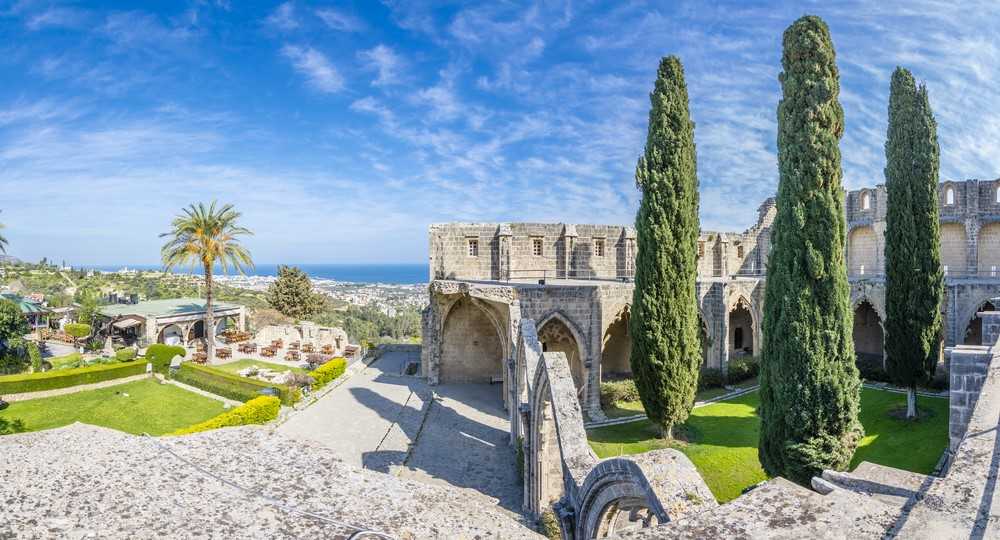 It is the best architectural complex of Cyprus, built in the Gothic style. The abbey was founded by the Augustinian order of monks in the 12th century. It stands on a high hill from which there is a beautiful panorama of the surrounding countryside and the nearby city of Kyrenia. Through the efforts of the monks several dozen buildings were built, most of which have not survived. The abbey was attacked several times and completely looted. Today, tourists can admire the medieval church with its frescoes, the refectory building, the arched passages and walls, and the basement rooms. 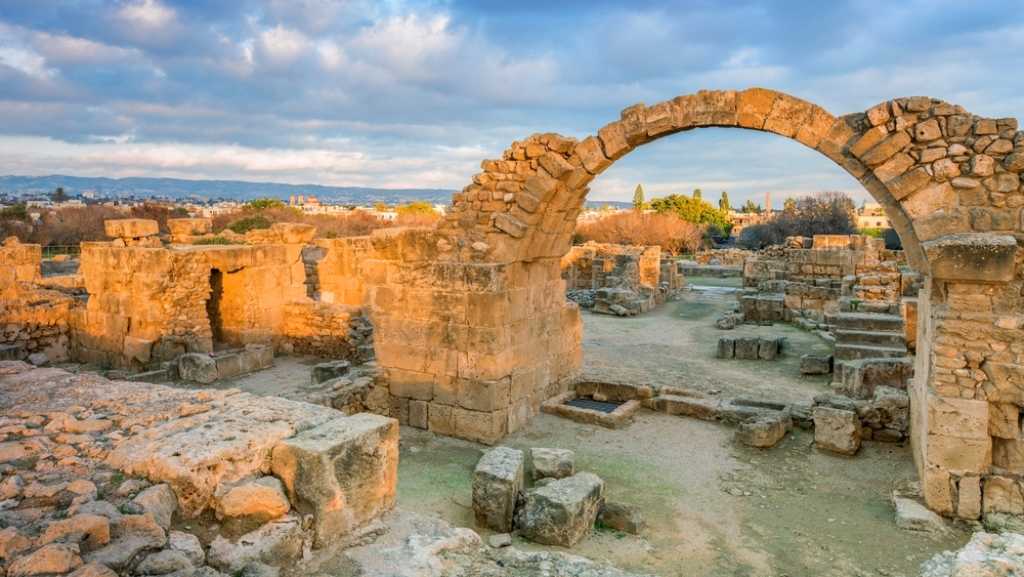 This is the largest archaeological museum in Cyprus and includes Hellenistic and ancient Roman structures. Like many such architectural gems, it was discovered completely by accident during construction work. The first discovery was the mosaics of a dwelling belonging to a wealthy townsman. It is called the House of Dionysus, dated II century AD. The priceless mosaics have not lost their brightness of color over the centuries. The most important of them are “Apollo and Daphne”, “Dionysus and Icarius”, “Pyramus and Thysba”. Besides the House of Dionysus a dozen more such dwellings with mosaics, internal light wells, atriums, pools, sewers and many rooms were found. Also in the Archaeological Park you can wander through the Byzantine castle Saranta Colones, find yourself on the stage of the amphitheater, go to the ancient temple of Asclepius and get lost among the Doric columns of ancient tombs.

What can be seen in Cyprus by a tourist

The list of sights to see in Cyprus is extensive. Here everyone will find something they are sure to like. Whether it is an amusement park, water park, Orthodox monastery, medieval castle, open-air museum or natural wonders of Cyprus. 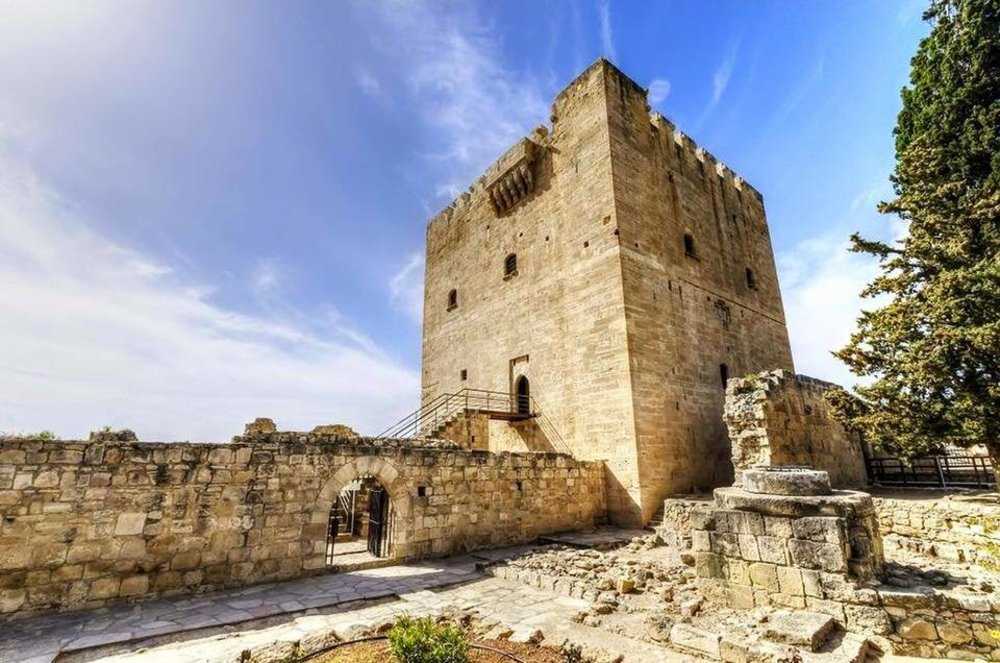 Kolossi Castle is worth a visit if you are staying in or near Limassol. It is one of the best attractions around this resort. The citadel owes its appearance to the activities of the Knights Hospitallers. Construction of the castle was in the XIII century. The most massive building of the castle is a three-story square tower. Its height is more than 20 meters, and the thickness of the walls is almost three meters. Over time the Hospitallers left the territory of Cyprus, ceding possession of the castle to the Order of Knights Templar. On the second floor of the tower are preserved church frescoes. In the basement there are wells for drinking water and the roof of the castle served as a place of patrol, from where sentries watched the surroundings. The economic well-being of the castle was based on the cultivation of sugar cane, grapes and carob trees. 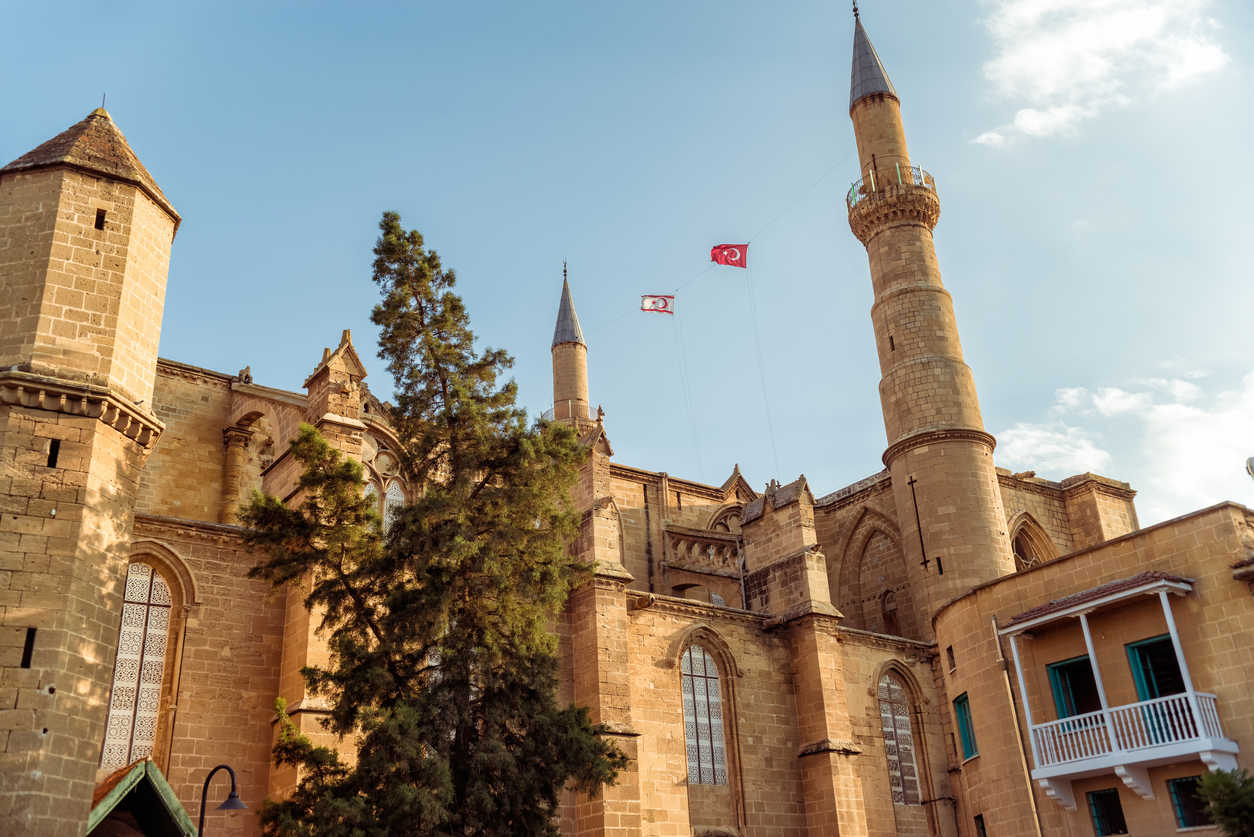 The history of Selimiye Mosque looks fantastic. European gaze easily recognizes in the building of the mosque the appearance of a Christian church. In XIII century Crusaders began the construction of St. Sophia Cathedral. The construction work stretched over more than a century period. St Sophia Cathedral has long served as a place of coronation and performed the role of the cathedral on the territory of Cyprus. It was converted into a mosque in the 1500s during the Ottoman conquest. The Ottomans added two minarets to the Gothic cathedral and removed crosses and Christian paraphernalia from the temple premises. Today the Selimiye Mosque is the main mosque in Northern Cyprus.

READ
10 romantic ideas for a honeymoon in Santorini, Greece

Famagusta is a densely populated port city that arose from the ruins of Arsinoia. The history of the city goes back to the time of the Ptolimeans. In the 12th century Famagusta became a transit point for the Crusaders on their way to the Holy Land. During this period begins the development of the historic part of the city, mainly built Christian churches. Be sure to visit the Cathedral of St. Nicholas, which is now a mosque. The same fate befell other churches in Famagusta, such as the Church of Peter and Paul. In addition to the churches turned into mosques, you can admire the monastery of Ganchvor, wander among the ruins of St. George’s Church and try to find traces of cannon balls left by the Ottoman siege of the 1500s. 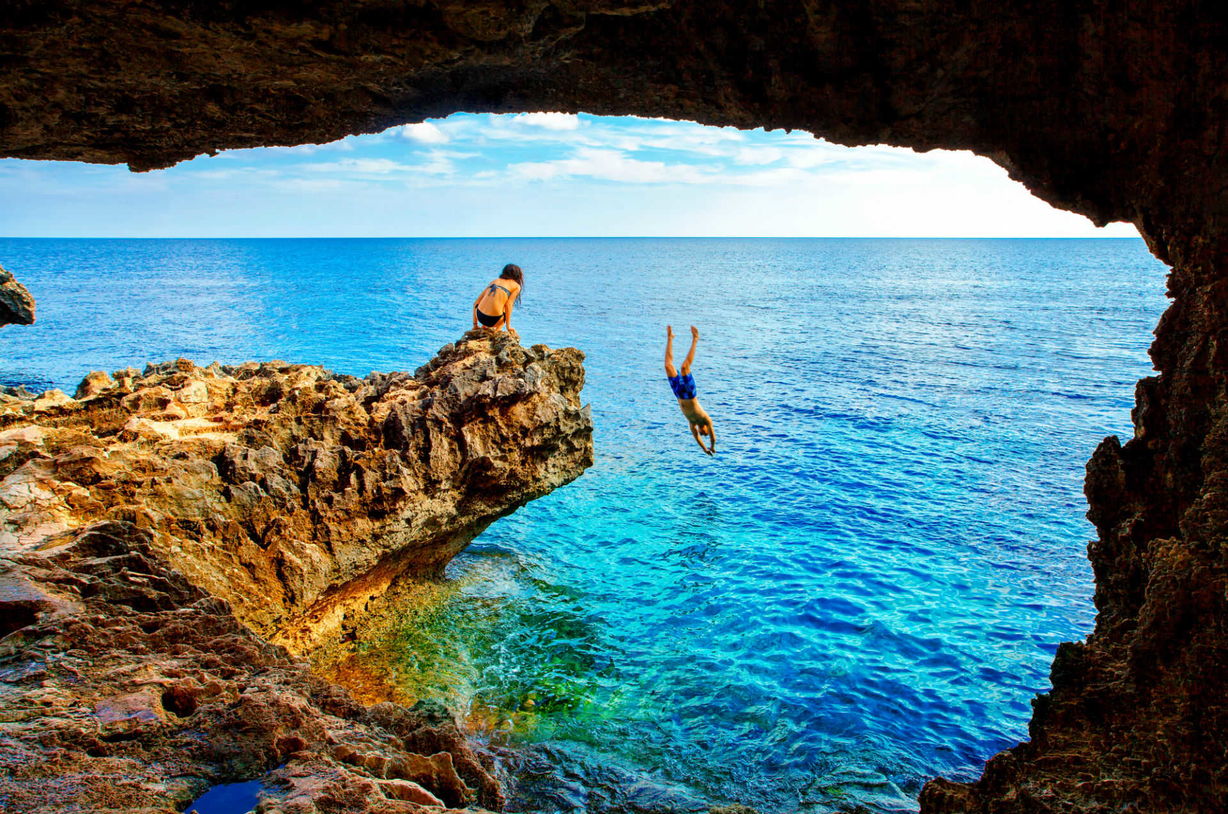 Kavo Greco National Park is located near the youth capital of Cyprus, Ayia Napa. For the most part it is a mountainous area with sparse shrubs. There are asphalt roads and many dirt roads through the park. Most tourists come here for the Cape Cavo Greco. It is an ideal place for a romantic date with a loved one. It offers a magnificent panorama of the azure waters of the Mediterranean and the rugged coastline. Here you can meet the sunrise or spend the sunset. It is also possible to rent diving equipment in the park. 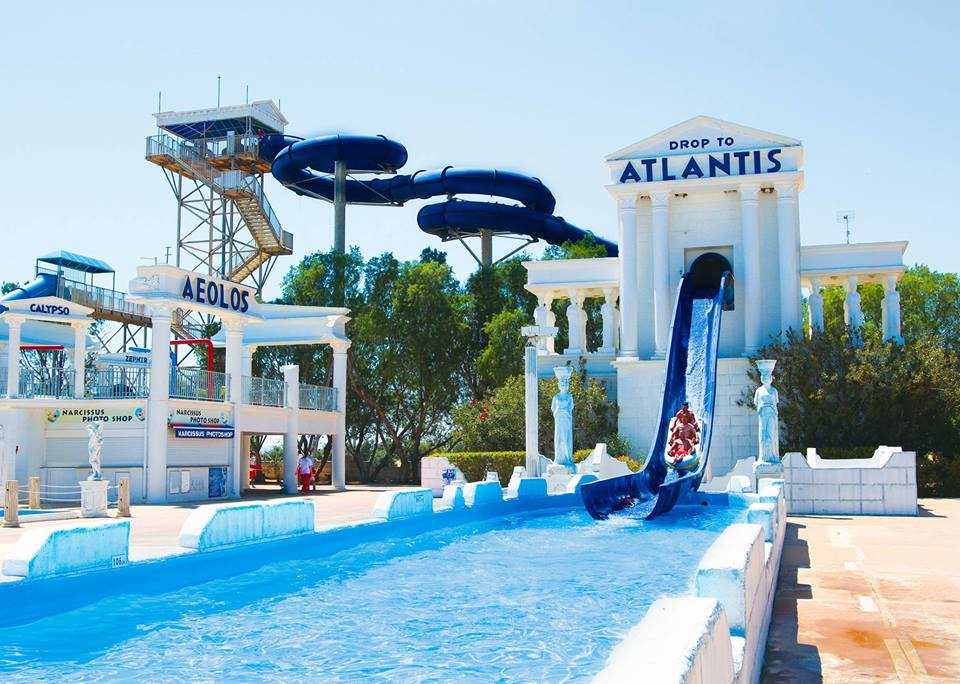 The biggest theme park in Europe has 35 rides, where you will find attractions for children, and for fans of extreme emotions. The favorite attraction of all tourists is the “Fall into Atlantis”. A three-seater whirlpool carries visitors with unimaginable speed through the dark zigzags of the slide, illuminated by flashes of light and visual effects. There are cafes and restaurants on the territory of the water park, and professional photographers are ready to capture you. Here you can spend the whole day enjoying the water and the sun.

READ
Itinerary of Rome in one day, Italy

Cyprus has many interesting sights that are worthy of travelers’ attention. 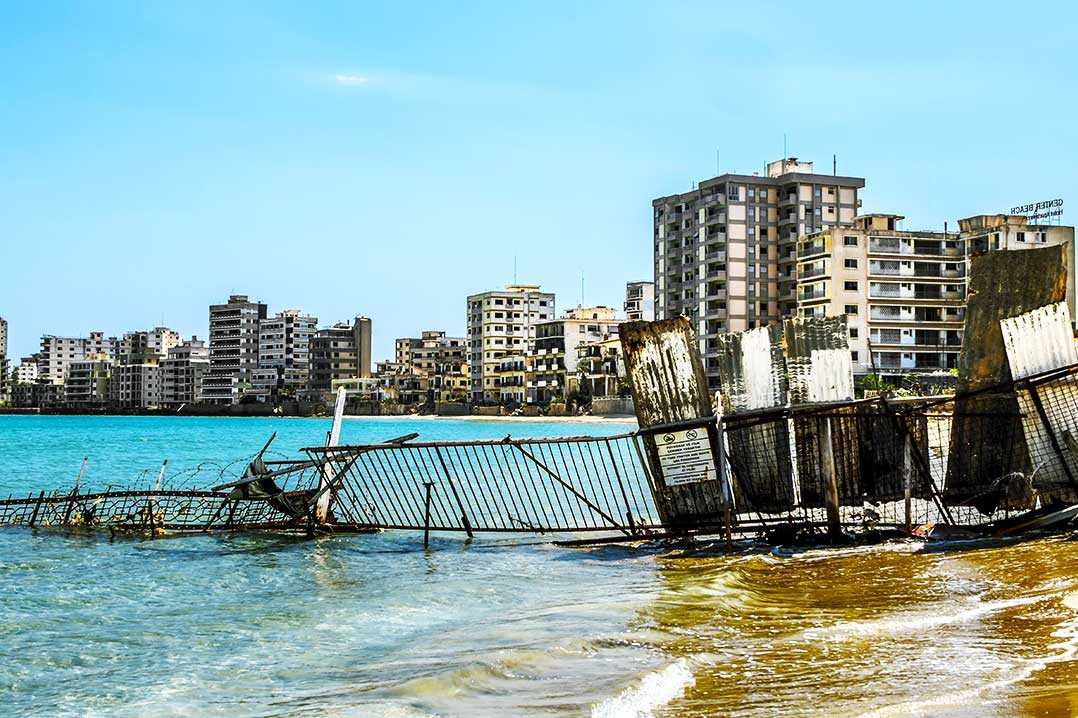 Varosha is a ghost town, where no one has lived for over 40 years. It used to be one of the best resort areas of Famagusta. There were five-star hotels, working restaurants, the rich and famous came here to rest. But everything changed at one point in 1974, when Cyprus was divided into two parts. Varosha found itself in the demilitarized zone. Residents hurriedly left their homes to escape the Turkish invasion. They were unable to carry away all their valuables. After they left, Varosha was looted by looters. Today, all the buildings in the town are slowly deteriorating, trees and bushes are reclaiming their place amidst the silent asphalt. 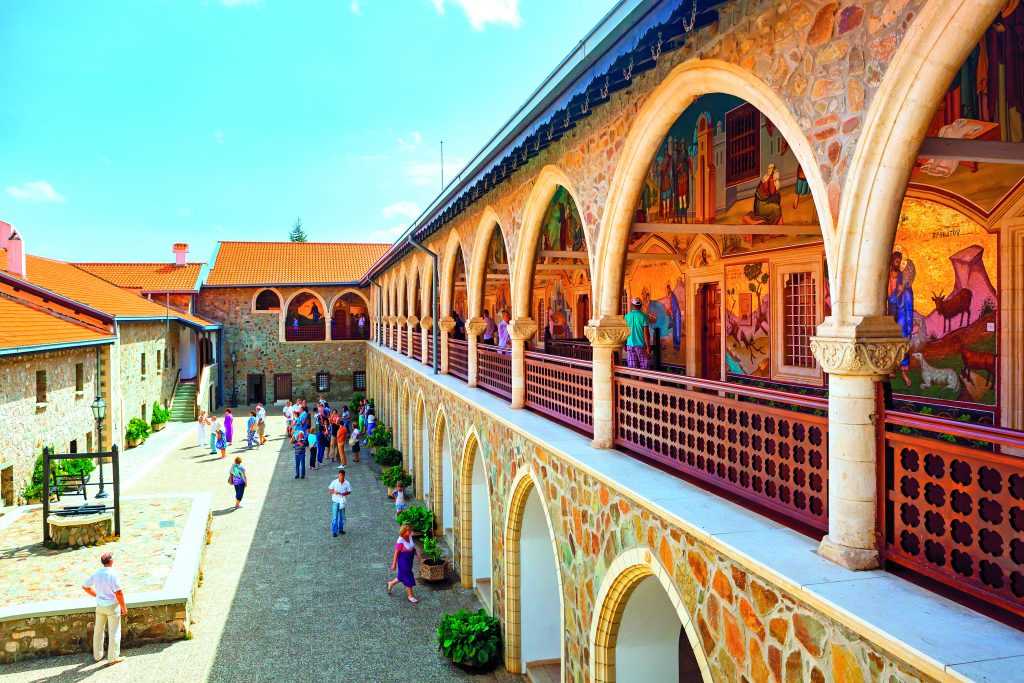 In the Troodos mountains at an altitude of 1100 meters stands the pearl of Orthodoxy – Kikkos Monastery of the Icon of the Mother of God. The history of the monastery dates back to the XI century. There is an interesting legend about the reasons that prompted the Byzantine emperor Alexis I to return the icon painted by the apostle Luke from Constantinople to Cyprus. The icon became the main shrine of the Orthodox monastery. Every year thousands of pilgrims come here to pray before the miraculous icon and visit these holy places. 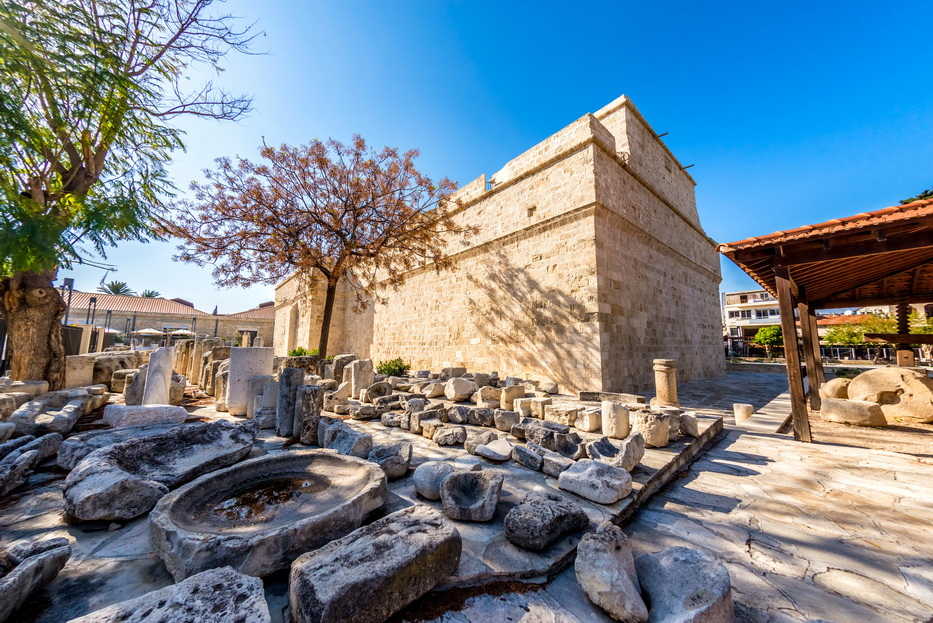 The history of Limassol Castle begins in the 4th century. At that time on this site stood a Christian basilica. In the tenth century the Byzantines greatly expanded the basilica and built a fortress. With the arrival of the Crusaders in Cyprus territory the fortress and its church with the chapel were taken over by the Knights Templar and Hospitallers. Legend has it that the wedding of the English King Richard the Lionheart took place here. The fortress took part in several major military confrontations. In the 1500s, after the Ottoman conquest, it became a strong point of the Turkish domination. The Ottomans had significantly strengthened and expanded the territory of the citadel. In the basements of the fortress casemates were equipped. And since 1800th the fortress became a full-fledged prison. Today there is a museum, which has a fine collection of medieval weapons and armor.

READ
Rent a Villa in Cyprus 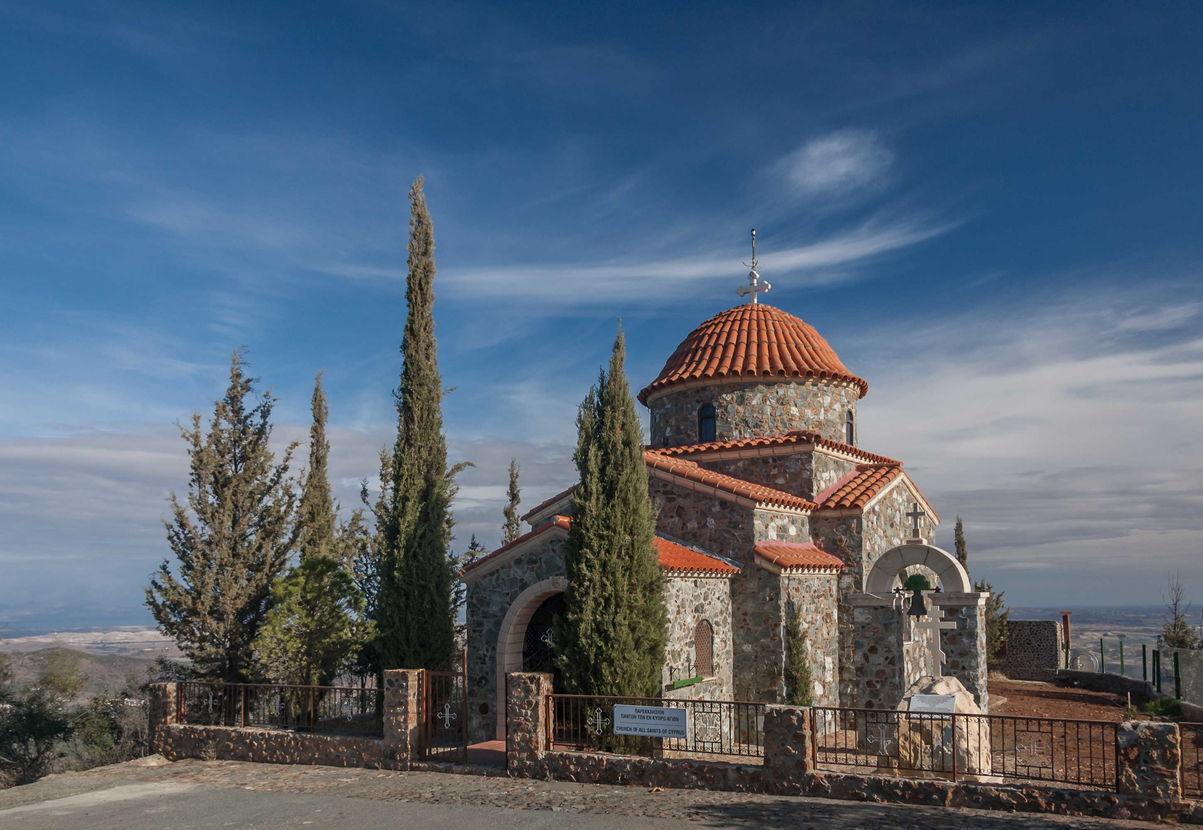 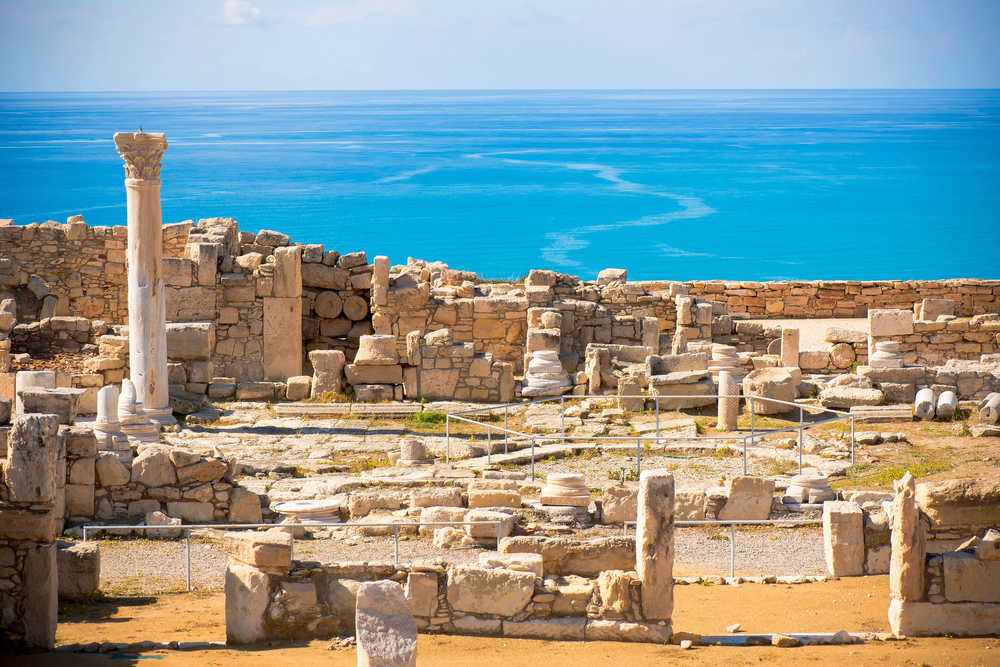 This ancient city of Cyprus is situated not far from Limassol. The Mycenaeans, Greeks, Romans, Byzantines had a hand in its construction. Today Kurion is an open-air museum. Here you can admire the beautiful mosaics, visit the temple of Apollo, get to the amphitheater scene, and see the ruins of an early Christian basilica. Kurion stands on a rocky hill from which there is a magical panorama of the surrounding countryside. 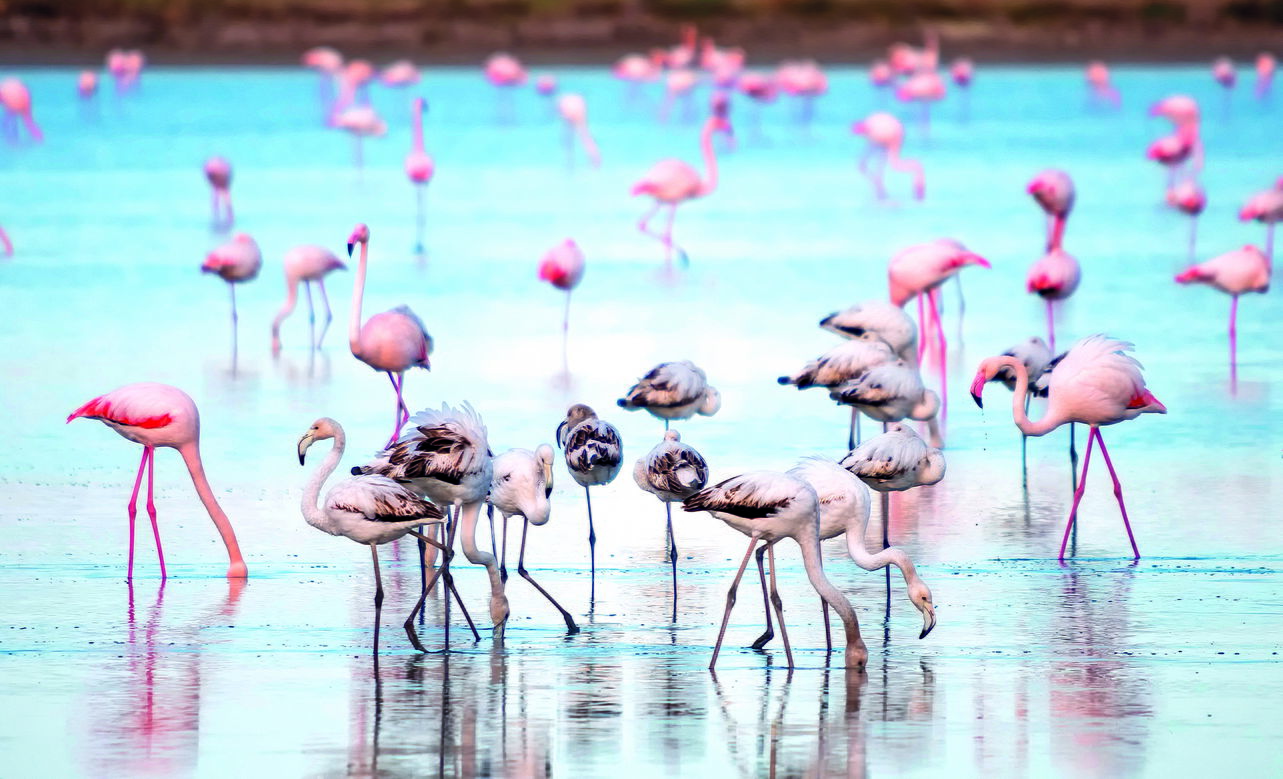 There is a small salt lake in Cyprus, which is located near Larnaca. The best time to visit it is in the evening. The sun, dipping below the horizon, paints the surface of the lake in pink, orange, yellow, purple. The most beautiful photos can be taken at sunset. From February to March, these places attract thousands of pink flamingos. Around the salt lake there is a comfortable path, there are benches.