Among the many attractions in Salzburg, the places associated with the life of Wolfgang Amadeus Mozart have a special place. Don’t miss the chance to take a closer look at the great composer’s biography, the musical instruments he played, and the ancient interiors.

The house where Mozart was born and spent his early years is called the Mozarts Geburtshaus on Getreidegasse. It can be easily recognized by the gold inscription on the facade. Another house, which the composer’s family later moved into, is the Mozart-Wohnhaus on Makartplatz.

History of the Mozart House

The Mozart family had had an apartment on the top floor of a three storey building on Götreidegasse since 1747. It was owned by the grocer Hagenauer, from whom they rented an apartment. The place was considered quite prestigious to live in.

In this house Leopold and Anne-Marie had their daughter Maria Anna. The future composer was born here on 27 January 1756.

From childhood, the children were surrounded by music: his father served as a violinist in the court chapel of Count Sigismund von Strattenbach. When his daughter was seven years old, Leopold began to teach her the harpsichord.

The three-year-old Wolfgang was captivated by these lessons: at that age he was already fascinated by the musical instrument and he spent a long time selecting harmonies. Gradually he began to learn lighter pieces with his father and he quickly learned to play the harpsichord. At the age of five, he composed his first small pieces.

The family lived in this house until 1773, when they moved to a house on the Macartplatz, on the opposite bank of the river.

In 1880 it was decided to build a museum in the house on Getreidegasse. To this end, the building was closed for renovation.

Today the museum is open to all who wish to learn about the life and works of the great composer.

READ
Top 30 Sights of the Stavropol Region - Description and Photos 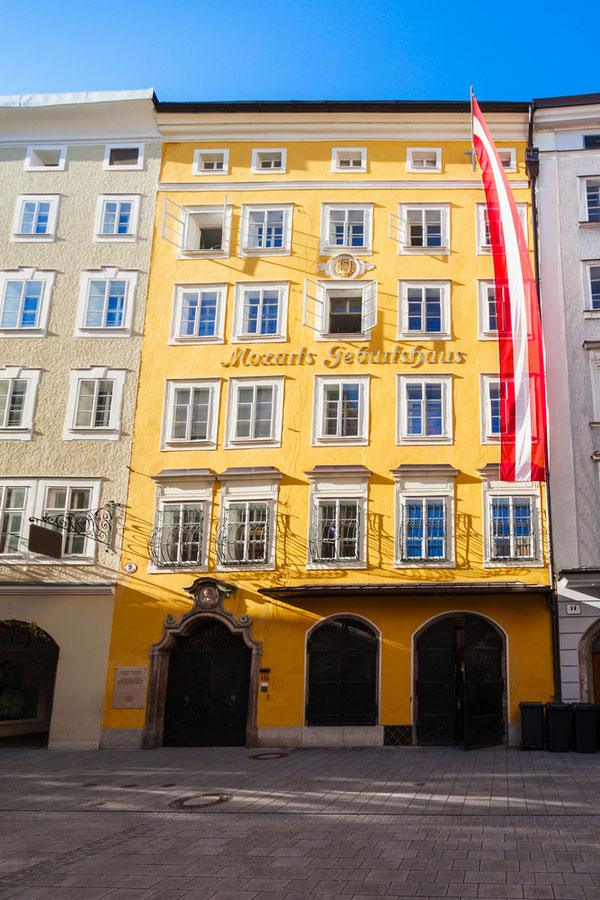 What to see in the Mozart House on Getreidegasse

The museum occupies three floors. As you stroll through the rooms, you’ll learn about important moments in Mozart’s biography, his immediate surroundings, and his creative development.

The halls on the third floor display the first sheet music, various documents, and letters. Much of the furniture is original – preserved from the 18th century. On the walls you can see portraits of the composer and members of his family.

In Mozart’s room on the third floor, there is a recreation of everyday life in the family in 1759: that was when the young composer was taking his first steps in learning music.

Particularly interesting are the six musical instruments on which Mozart played: three violins, a viola, and two keyboard instruments. These instruments are still used in concerts today.

On the second floor, you can learn about the composer’s opera works, which he became interested in at a more mature age. You will see paintings depicting scenes from Mozart’s operas.

The first floor is occupied by an exposition depicting the life of Salzburg citizens at that time. You can see antique furniture, clothing, household items and more.

The bulk of the collection comes from the Mozart International Foundation’s archive, but there are also items from private collections.

The composer lived at the house on Makartplatz for three years – until his departure for Vienna. Many symphonies, concertos, and other works were written here, including the beginning of the famous opera The Imaginary Gardener.

The building was badly damaged during the Second World War – only the part of the house where the dance class was held survived. That is why the house is also called the Dancing House.

In 1955 the surviving part of the building became the property of the International Mozarteum Foundation (Mozarteum). The museum was opened to the public in 1996 after the reconstruction.

READ
The 40 best sights in Busan - descriptions and photos

In the House on Makartplatz you can see the composer’s original instruments and personal belongings, get acquainted with his works and learn about everyday life in general.

How to get to Mozart House

The exact addresses of the sights:

A visit to the house where Mozart was born will take about an hour, and for a tour of the residence on Makartplatz allot about an hour and a half.

As of 2022, a ticket separately to the Mozarts Geburtshaus or Mozart-Wohnhaus costs:

A family ticket for 25 Euros is also available. It can be used by two adults and a child.

If you want to visit both attractions, you can buy a combined ticket. Its cost:

For information on timetables and ticket prices please visit the official Mozart House website at mozarteum.at.

You can immerse yourself in the atmosphere of the past, and learn more about the life and works of the great composer on a private tour of the Mozart House. In the company of a professional guide a visit to the museum will be more intense and entertaining than if you see the site on your own. 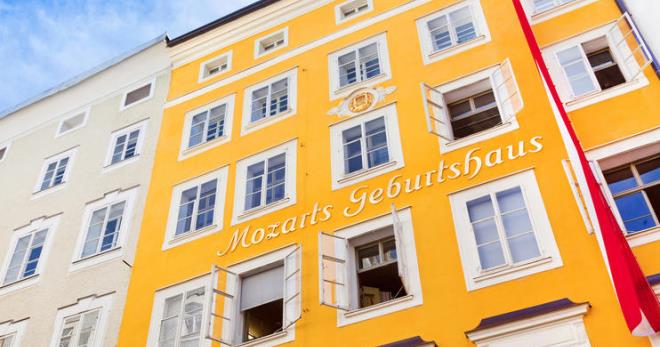 Mozart is one of the most famous natives of Austria. He was born in the city of Salzburg, on the third floor of house No. 9 on Getreidegasse. Despite the fact that several centuries have passed since then, this place is still very popular. Both music lovers and ordinary tourists who want to visit the house where Mozart was born in Salzburg make pilgrimages here.

Historical facts about the creation of the museum

Wolfgang Amadeus Mozart was born on January 27, 1756. At the time, Leopold Mozart, his father, had already lived here for nine years with his wife Anna Maria and their daughter Maria Anna, nicknamed Nannerl. It was in this apartment that the future genius first picked up a violin and was already composing his own pieces at the age of five. Later the family moved to Makartplatz 8 (today there is also a thematic exposition, and the house itself is called the Dancermeister House).

The museum, which today bears the sign Mozarts Geburtshaus, was opened in 1880 by the International Mozarteum Foundation. Austrians love and honor the genius who made their nation famous the world over, even though the great Mozart once died poor and was even buried in a mass grave. 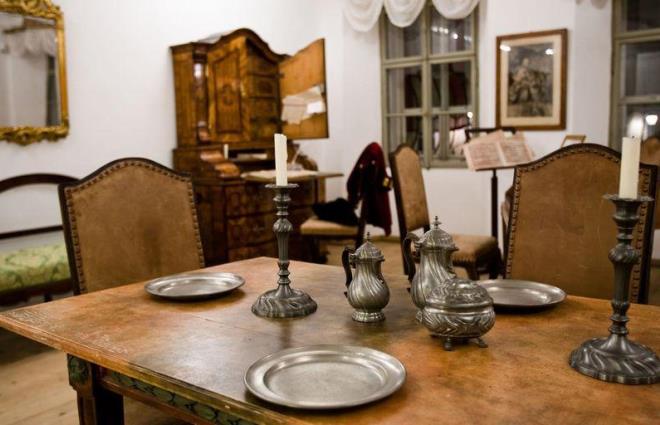 An unusual feature of the Mozart House Museum in Salzburg

Visiting this place leaves a very pleasant, warm impression. It is not the half-empty dusty halls, where the footsteps of rare visitors echo in the silence, but a small, cozy family nest, which became the cradle of the talented composer. The museum will tell you about Wolfgang’s early years, about his family and relatives and their home environment.

Melodies composed and composed by Mozart himself are played unobtrusively, while modern interactive elements such as illuminated documents and audio-visual equipment do not spoil the impression of a visit to an 18th-century apartment.

READ
The 25 best sights in Salzburg - descriptions and photos 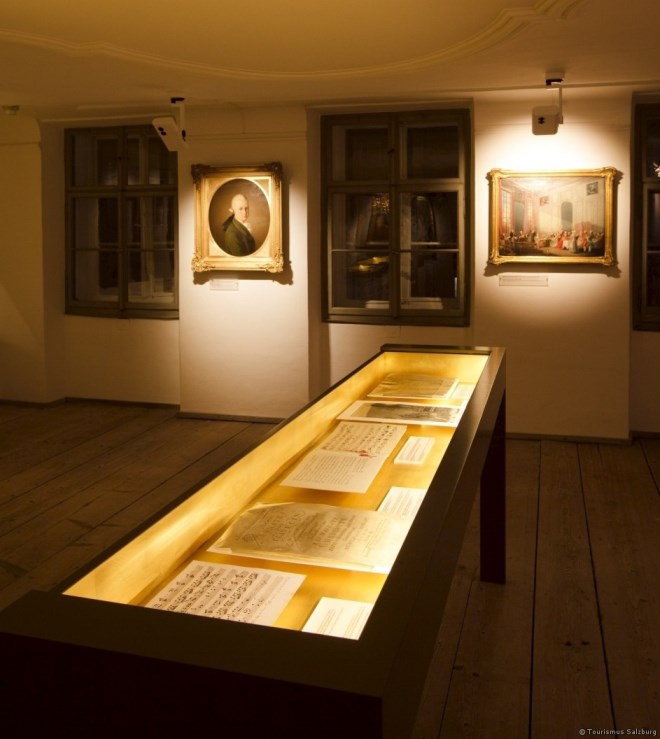 There are relatively few objects in the museum – it is not the Kunsthistorisches Museum in Vienna or Belvedere Palace, where you can find real masterpieces at every turn. However, each of the items in the collection of the Mozart House Museum in Salzburg has its own history, as well as enormous historical and cultural value. Among them:

Separately, two exhibitions not directly related to Mozart’s life are worth mentioning. These are:

Features of the visit

Before you go on a tour to the Mozart House Museum in Salzburg, it is worth asking about its opening hours. It is open to the public daily from 9:00 to 17:30, and in the summertime for half an hour longer.

Admission costs €11 for adults, €4 for teens ages 15-18, and €3.5 for children ages 6-14. The tour lasts 1 hour and can be conducted in different languages (Russian speaking tourists should sign up in advance). 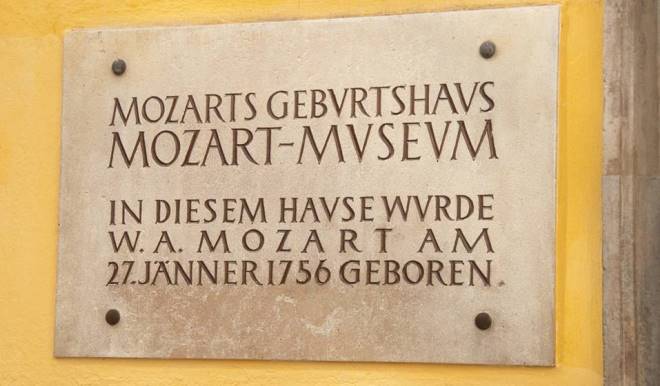 READ
The 20 best sights of Guilin - descriptions and photos