Monument to the Tsar Peacemaker in Livadia

In Livadia park complex, where in addition to the palace, which is the reason why tourists come here, the monument to the leaders of the “Big Three”, the Path of Health and natural beauty may be attractive. But not so long ago there appeared another attraction – a monument to Alexander III.

The 4-meter bronze monument, cast in the Urals, was presented to the residents of Crimea by Russian artists. The autocrat in a military uniform with orders sits on a tree trunk, leaning on his sword, thinking about Russia and looking into the distance. Behind his back is a stone slab topped with a double-headed eagle, depicting the most important achievements of his reign – the airplane designed and built by naval officer A. Mozhaysky, the three-line rifle S. I. Mosin rifle, adopted by the Imperial Army, the first section of the Trans-Siberian Railway, factories – in a word, everything that appeared in 1881-1894, as well as outstanding personalities of that time – Przewalski, Mendeleev, Dostoevsky, Tolstoy, Tchaikovsky, and others. 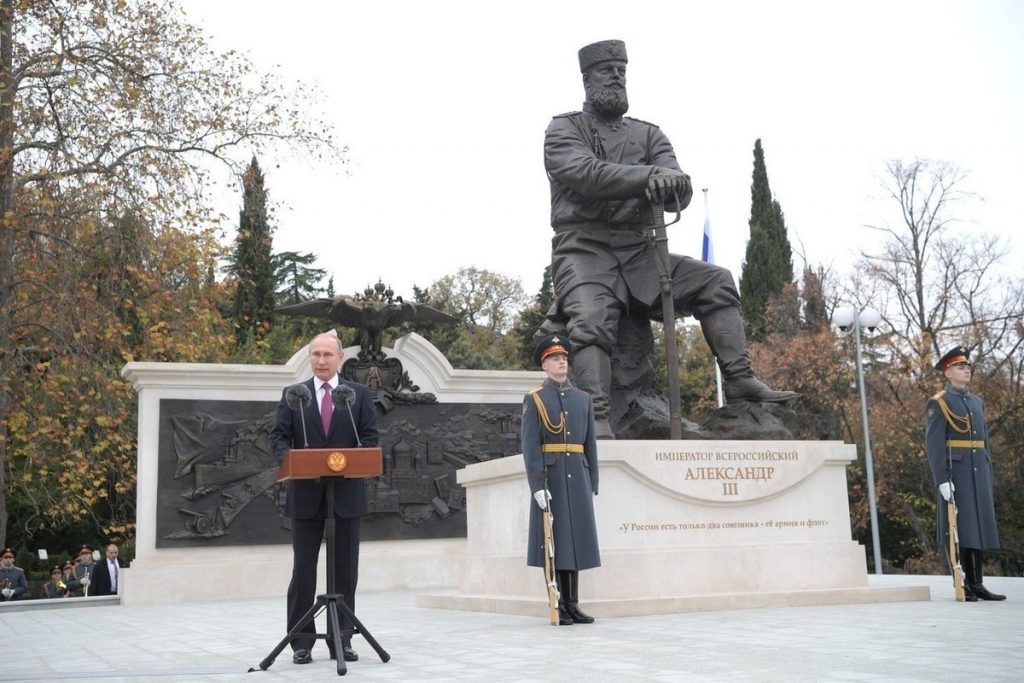 Emperor of All Russia firmly, without conceding, defended peace for Russia by counter-reforms, under him the empire was not involved in wars. The ruler’s actions were not easy, but his determination and steadfastness of spirit are worthy of respect. A tribute to him and became a monument, the essence of which is carved in the phrase on the pedestal, revealing the royal credo, and it is that the army and navy – the two allies that Russia has.

The composition, whose creator was A.Kovalchuk, was opened on 18.11.2017 in the presence of guests and symbolic guards to the imperial anthem of Russia (although unofficial). At the ceremony, when President Putin listed the achievements of the peacemaker emperor over the 13 years of his reign, emphasis was placed on the fact that thanks to his tough advocacy for peace, the Russian Empire was not involved in any major military conflict. Sensing responsibility for the fate of the empire, Alexander III took steps to strengthen it, develop industry, acted openly and firmly, doing everything for the stability of the empire and the growth of the country’s influence in the world. Under him, the army began rearmament, shipbuilding was activated, but increasing the military might, it was necessary to preserve the spiritual values of the people, without which respect for culture and history is impossible. Normal life can only be in a strong and independent state. The merits and accomplishments of the people’s emperor himself are not forgotten, nor are those who contributed to the prosperity of the fatherland. These tasks are still relevant today.

READ
Chile is the longest country in South America 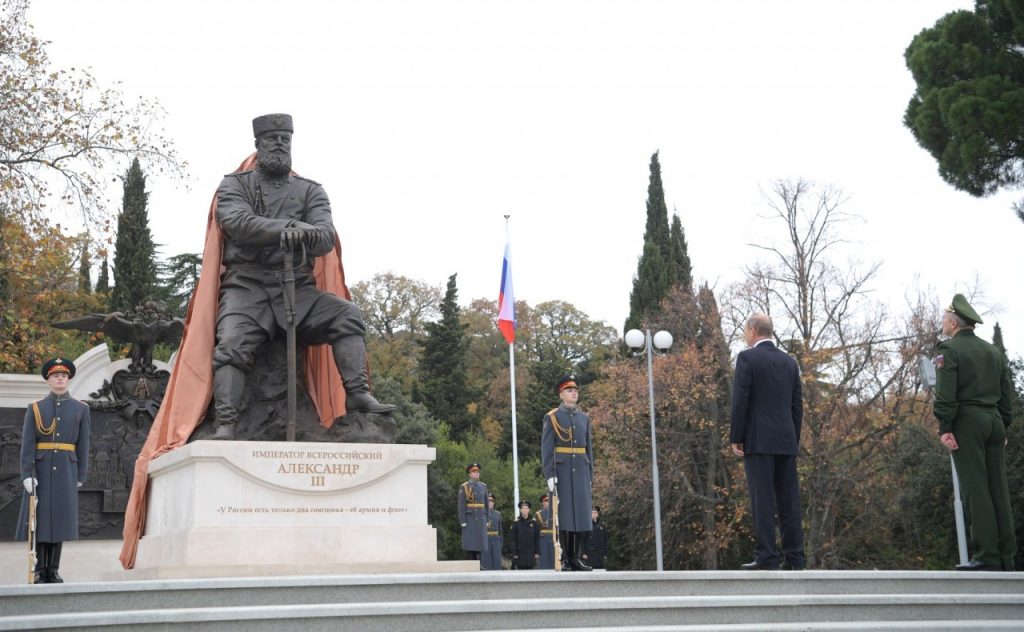 In 1861 the daughters of the diplomat Anatoly Pototsky sold their estate in Livadia to the state and they made a summer residence for Alexander II and his family there. The Count’s mansion was transformed into a grand palace by the tsarist architect Ivan Monighetti; apart from the stables and outbuildings, the Church of the Exaltation of the Cross was built nearby, and a small palace in the Eastern style was built for the future Alexander III.

After ascending the throne in 1881 during his visits to the Crimea he always stayed in his palace. During the train crash near the Borks in 1888 Alexander III, trying to save his family, held the roof of the carriage for at least half an hour until help arrived. But no matter how powerful the autocrat was, the excessive strain had its own negative consequences. The progressive disease led to the fact that here in Livadia, the most Russian of the Romanov tsar in 1894 and died.

So the installation of the monument in the place where the royal family loved to rest, and where its head spent his last days, is not accidental. 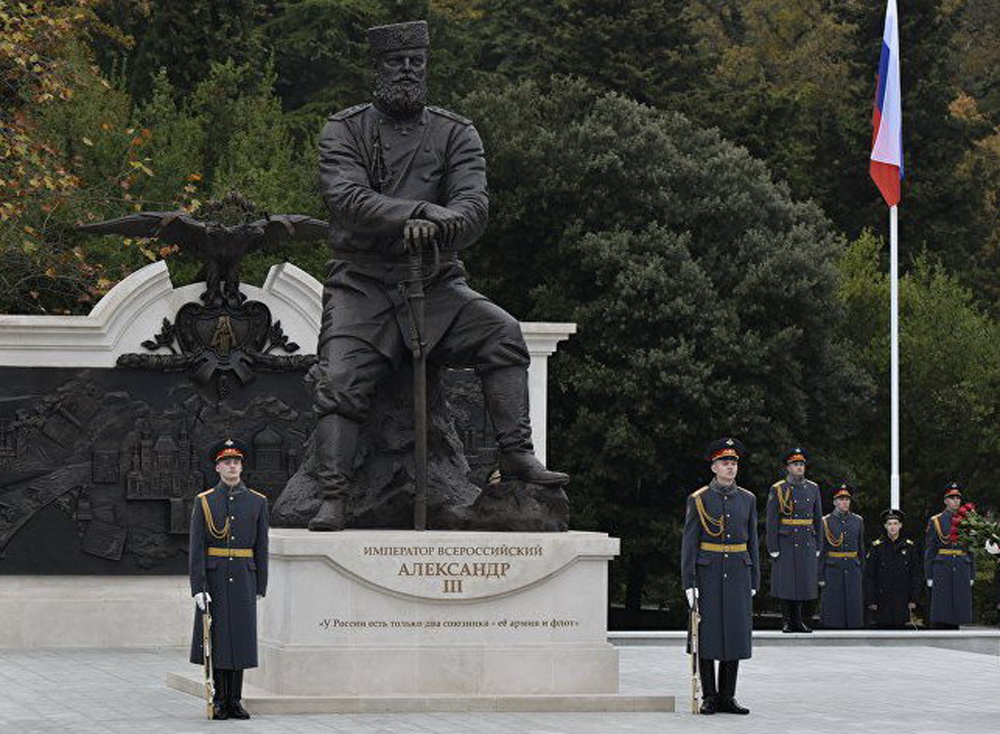 The White Palace appeared on the site of the demolished Grand Palace in 1911. After his coronation in 1896 and before 1917 the eldest son of the deceased Emperor Nicholas II carried out a lot of projects to perpetuate the memory of his father. Apart from monuments to him (of which there are no less than 40 in the country), columns and obelisks as a sign of visiting this or that place, museums named after him were opened by imperial decree in various cities. After the October coup the Bolsheviks resolutely erased all memory of the monarch, and the monuments of Tsarism were destroyed. Although the magnificent bridge over the Seine, built in Paris to commemorate the Franco-Russian alliance in 1896-1900, is unharmed to this day.

If under the Soviets the buildings of the Grand Palace were used, the Small Livadia Palace during the occupation of the Germans was ruthlessly destroyed. Now there are always a lot of tourists here, and the recent sight is not ignored. The area around the ensemble is landscaped and decorated with lawns, and the tricolor on the flagpole, formerly the flag of the Russian state at the time of Alexander III, hovers over the monument and now.