The imperial monastery at Lorsch near Worms was founded in the eighth century and soon established as an influential and privileged abbey. Many medieval monarchs visited it. Some of them even willed to be buried there.

Before the Romanesque period.

The richly decorated entrance gate with the Royal Gate (Königshalle) is the only Doromanesque part of the monastery which survived the devastating fire of 1090. The gate was built probably at the very end of the ninth century and is one of the few Carolingian monuments to have survived in its entirety.

In 1991 the monastery of Lorsch and its archaeological sites were added to the UNESCO World Heritage List.

Dorothea Redeker has been the first chairwoman of the board of trustees of the Lorsch Monastery since 2011.

DW: What is not to be missed when first getting to know the World Heritage Site in Lorsch?

Dorothea Redeker: The main attraction of the former Lorsch Monastery is its gateway with the hall above it – the Torhalle, or Royal (Königshalle) as it is called. The façade attracts attention with three arches and rich ornaments of red and white sandstone. Be sure to join one of the tours, where you can learn many secrets known only to the initiated. Scientists have not yet come to a definite conclusion, whether the rooms above the gates were used for religious ceremonies, court sessions or as a library…

– A lot of unanswered questions. There aren’t many traces and testimonies of this Benedictine abbey but scientists from all kinds of disciplines – historians, architectural experts, art historians, architects, geologists and geographers – are working closely together to try to piece together as many details about the site’s past as they can. It is very interesting to observe their work, for example, when they abandon old hypotheses in favor of new and logical ones, supported by more solid facts, such as the location, appearance, as well as the purpose of individual buildings. It is as if the monastery continues to live. In 2014, special landscape design techniques will be used here to mark the foundations of the buildings in the original locations according to the most likely plan of development. This will allow visitors to better visualize and understand the scale and structure of the former abbey. In addition, work is underway to create a kind of open-air laboratory. In Lorsch, they are trying to reconstruct a lord’s cottage from Carolingian times, in which it will be possible to experience everyday life in the early Middle Ages.

– What is your special recommendation for future visitors?

– In addition to the Lorsch Monastery itself, the World Heritage status extends to Altenmünster, the remains of the cloister from which its history began. The monastery was originally founded by the Weschnitz River, one kilometer from the current higher ground, where it was later moved because of the threat of flooding. Around Altenmünster you can well imagine the atmosphere of peace and seclusion that prevailed here before the expansion of the Lorsch Monastery and its tumultuous heyday.

– What do you remember most from your first trip to these parts?

– When it comes to preserved architecture, the Lorsch Monastery can be described as a modest World Heritage Site. In any case, in 1986, when I was here for the first time, the unique historical significance of this place was not so clearly felt. That is to say, I was a little disappointed at first.

– What is the most beautiful time of year here?

– I like it best in spring, when you can see the monastery in full bloom.

– What else is worth seeing here?

– The Museumszentrum Lorsch (Museumszentrum Lorsch). Not only does it have a comprehensive exhibition on the history of the Lorsch Abbey, but it also has a noteworthy Tobacco Museum. If you have time you should pay a visit to the Old Town Hall, whose main attraction is the mural paintings in the Nibelungen Hall.

– Getting to know the World Heritage Site stimulates your appetite. What special regional dishes can you recommend?

– Which UNESCO World Heritage Site would you like to visit yourself?

– In Germany, I would love to visit the Park Kingdom of Dessau-Wörlitz. Elsewhere, I would visit the Old Town in Krakow, Poland.

In the 16th century, the manuscript was transported to Heidelberg when Elector Otto Heinrich founded the famous Palatine Library, just before the dissolution of the monastery in 1563. From there, it was stolen during the Thirty Years’ War and, to facilitate its sale, the text was torn into two parts and a cover. The richly illustrated first part of the codex ended up in the Magazzi library and was then sold to Bishop Ignatz Batjani. This part is now preserved in Alba Iulia, Romania, in the library of Batiani. The other half is in the Vatican Library. The front cover, with its famous ivory reliefs depicting biblical subjects, is kept in a Vatican museum. The back cover, showing the Madonna and Child, surrounded by saints and angels, with a scene of the birth of Christ below, went to the Victoria and Albert Museum in London.

During his state visit to Britain on September 16, 2010, Pope Benedict XVI gave a facsimile of the codex to Queen Elizabeth II. As a reciprocal gift, the pope was presented with copies of Hans Holbein’s drawings from the royal collection.

The medieval monastery of Europe is the center of the formation of the worldview of the Christian world.Nowadays, looking at a monastic structure…

The tract Ganina Yama – abandoned in the XIX century Isetsky mine, now the monastery of St…

The history of Mont Saint-MichelThe impressive island, the basis of which are millions of tons of granite, has only 930 meters in…

Suzdal ” Rest and Recreation ” Individual excursions in SuzdalIf you want to see not only the Lorsch Monastery, but also the most beautiful monastery of … 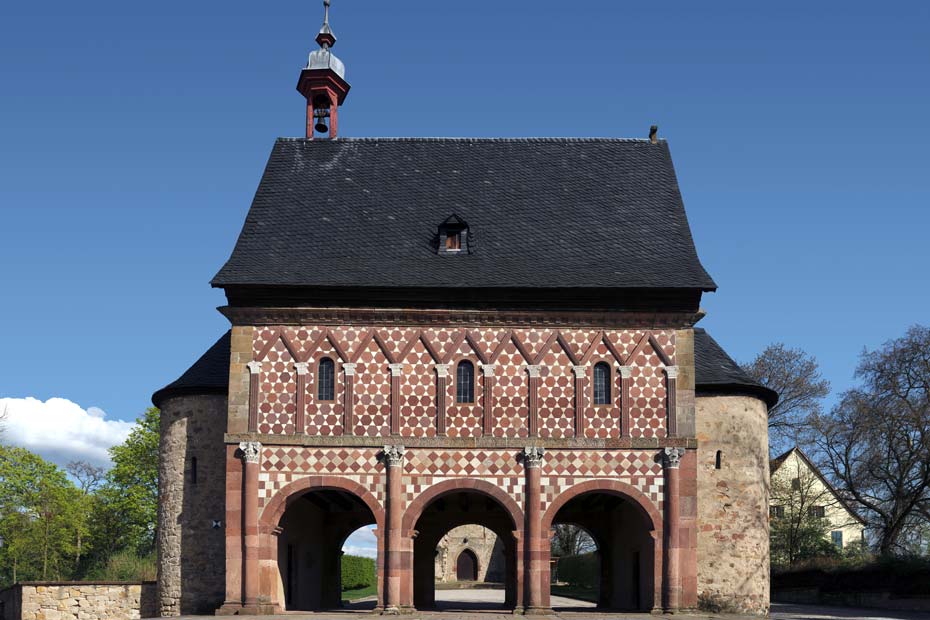 The Monastery of Lorsch, the most ancient Carolingian monastery, is well known for its surviving gated chapel. It is the only living reminder of the Carolingian Renaissance of the early Middle Ages.

READ
The most interesting places in Puerto Rico

Junior high school teachers try their best to immerse their students in the depths of history. From primitive communal structures to the intricate intricacies of the modern world. Any normal person of such a young age would find these lessons interesting to say the least.

In the days of “bubblegum” it was interesting to run through the streets and play “robber cossacks. I wanted to write “old robbers,” but I remembered that this is such a Soviet movie, not a game. Felt my age, saddened, shed a tear, go on. Now the street has been firmly displaced by computers and televisions, and the most popular word has become “gadget” and, more recently, Pokemon . And what I have written here is called a lyrical introduction, and it comes to an end. All I remembered from those history lessons was “endless ludovics, capetings, and carolings.” What these unknown words were, I was not particularly interested. Now I am more knowledgeable, and I will inform anyone who wants to know.

The topic of our today’s lesson will be the Carolingian dynasty. As the name suggests, it dates back to Charles, who for all his deeds during his lifetime was called The Great. He was the president of France, King of the Franks. It turns out that in our mighty language the word “king” was transformed from the name of Charlemagne. So it is. 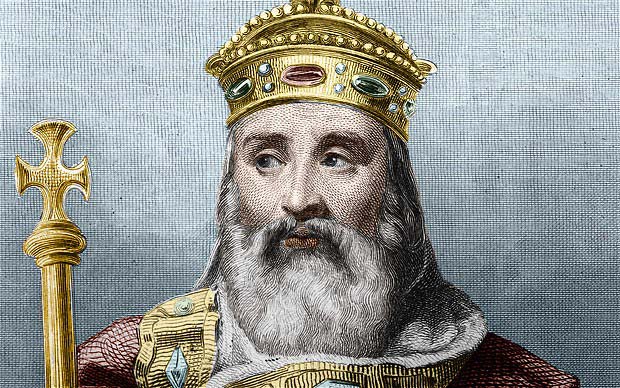 Charles was born in 742, 747 or 748 – the birth certificate, unfortunately, was not preserved. The Carolingian dynasty itself was enthroned by Charles’s father – Pepin the Short (the name, of course, in our language is not endowed with euphony, in school would have suffered, even a nickname can not come up). Pepin skillfully took advantage of a moment of uncertainty in the Merovingian dynasty . The last of them, named Hilderic III, had virtually no power, and Pepin asked the permission of the then Pope Stephen III to try on the crown, especially since the de facto already ruled. Stephen III, in exchange for military aid, agreed, and Pepin the Short was anointed king. And everything spun.

Pepin’s son Charlemagne widely extended the borders of the Frankish state through numerous successful military campaigns. However, his reign was not limited to the conquest of nearby territories. Largely thanks to him and his followers this time is called the Carolingian Renaissance. Here, of course, it must be understood that it was the 8th or 9th century. So the building of schools, libraries, churches and monasteries, where people were actively taught both spiritual and secular sciences, was really a breakthrough and a tremendous pursuit of knowledge. All of the above was a description of the era against which the Lorsch Monastery was formed. But first, let’s talk a little about the city.

The City of Lorsch

The city of Lorsch is in Germany, in Hessen, about 60 km south of Frankfurt.

To call it big would be an extreme delusion. The town is famous for its central market square and the old town hall 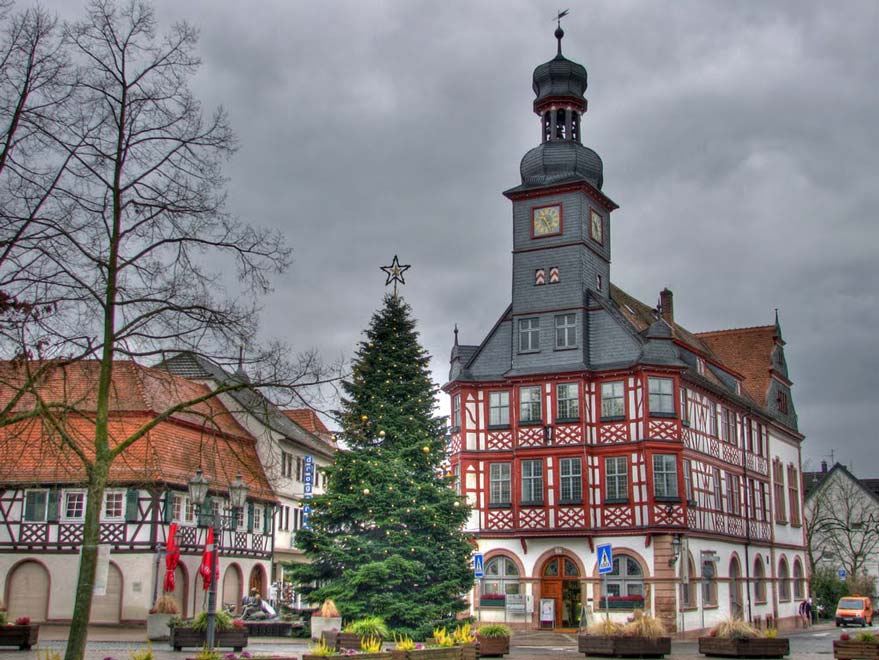 The main part of its fame and popularity in the modern world is due to the Lorsch Monastery, or rather what little is left of it.

The Lorsch monastery was founded in 764, which is a long, long time ago. Not surprisingly, little has survived to this day. The gate chapel is the only building that has survived from the very reign of Charlemagne . Although, in fact, it was built a little later Louis III, after a couple of centuries. But nevertheless the style is preserved and so one can consider it a Carolingian Renaissance building. 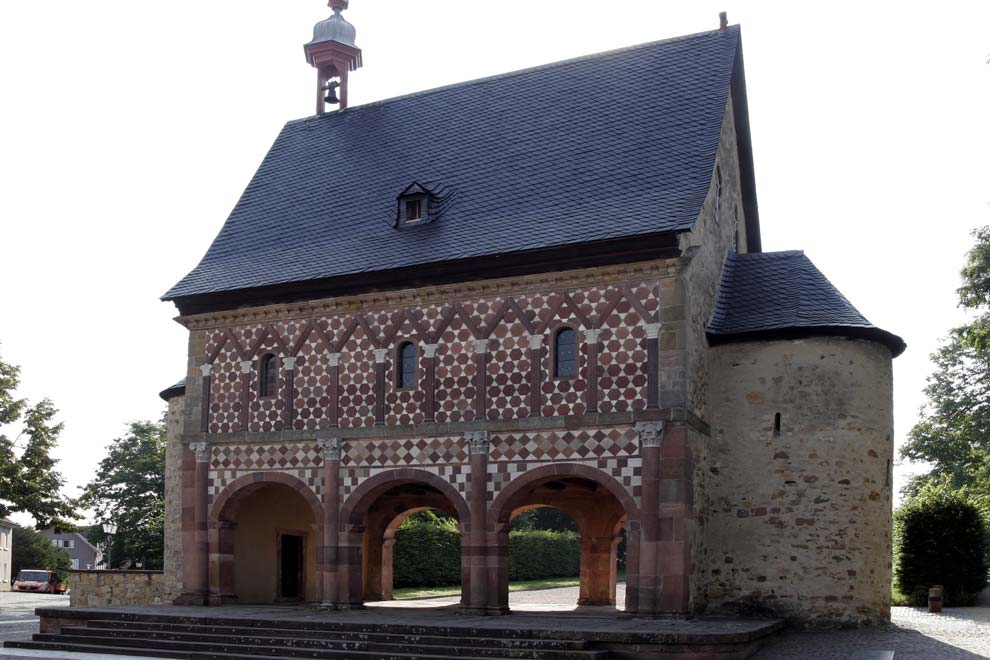 There are a few more ruins from later dates. They give a rough idea of the size and appearance of the monastery complex itself. There is no reliable information or a graphic depiction of the Lorsch monastery, so we have to make guesswork. We don’t know for certain how the chapel located directly above the gate was used. It was probably part of the wall around the monastery that was demolished a long time ago. The chapel was probably used as a reception room or parlor of sorts. It is not for nothing that it is located right in the gate. It may also have been used as a guest house or lodging. One can only speculate and fantasize.

The monastery was one of the centers of attraction for pilgrims after the Pope sent the relics of St. Nazarene. There was also a rather extensive library, which included the Lorsch Annals, a description of the history of the Frankish state in the eighth to ninth centuries. For those who know German or can use a Google translator, you can visit the official website of the Lorsch Monastery – www.kloster-lorsch.de .

The gate is now of great value, as it is the best preserved example of Carolingian Revival architecture. It is thanks to this that the Lorsch Gate Chapel and Monastery were added to the UNESCO World Heritage List in 1991.