The monasteries of Meteora are crowned by the 400 meter high peaks in the Thessaly Mountains (Pindus massif) . They resemble giant eagles’ nests on high sandstone cliffs, hewn and polished by erosion. Religious life in this place began in the X or XI century: the anachorets (hermits) took up residence in the caves at the foot of the rocks. These monks escaped the oppression of the Albanians, the Turks and robbers and found refuge in these mountains.

The name “Meteora” comes from the word meteorizo, which means “floating in the air.” This is the most accurate description of the appearance of the monasteries. When clubs of mist envelop the mountain slopes in the early morning, the buildings towering above them seem to hover above the clouds. The heyday of Meteora’s monasteries is in the late Middle Ages – at that time there were 24 monasteries and hermitages. Nowadays only 6 monasteries remain inhabited. Four of them are monastic: the Great Meteora or Megalo Meteora (Transfiguration Monastery), Saint Barlaam, Saint Nicholas Anapavasas and the Holy Trinity Monastery. Two of the monasteries are women’s monasteries: St. Stephen and the monastery of Rusanu (or the monastery of St. Barbara) . Although the other 18 monasteries are in ruins, in some places they are still inhabited by hermits who wish to preserve the cultural and spiritual heritage of Byzantium.

A View of the Thessaly Plain

The very first hermitages in the mountains appeared in the 11th century. The hermits fled from worldly affairs in order to continue their service to the Lord without hindrance and settled in simple mountain caves. As their numbers grew, the monks banded together in a monastic community similar to the spiritual republic on Mount Athos.

Only a few hermits founded the very first hermitage, Dupiani, now razed to the ground. Only a small 13th-century chapel stands as a witness to their ascetic life.

In 1334 the monk Athanasius arrived in the monasteries of Meteora. With his arrival the monastic life really began to flourish in the area. In 1370 he and 14 other monks climbed the highest rock and founded the monastery of Great Meteora, also known as Metamorphosis (i.e. Transfiguration) . Covering an area of about 60,000 square meters, Meteora is one of the largest monastic complexes. According to legend, an eagle, or even an angel, lifted Athanasius up to the mountain peak. This monk first laid down the rules of conduct that the others had to follow in observing the laws of monastic life at Meteora. In time he and his followers founded several more monasteries around.

Today only 6 of the 24 monasteries are inhabited. In the monastery of St. Nicholas of Anapavasas, in the chapel of John the Baptist, laid out on shelves in even rows, are the skulls of all the monks who ever lived in this monastery. The walls of the cathedral are decorated with frescoes by Theophanes Strelidzas (ca. 1500-1559), an outstanding iconographer of the Cretan school, a group of artists in which the famous El Greco was a member. The monastery of St. Rusanou (or St. Barbara) was founded in 1388. Reconsecrated in 1950, it was more frequently plundered and desecrated than other monasteries. Its 16th-century frescoes are incomparable masterpieces. The monastery of St. Barlaam was built from 1518 to 1535 and is mentioned in the travel diary of 1779 as a convent.

Monastery of St. Nicholas of Anapavasas Ascent to the Great Meteora Monastery

The Great Meteora, the largest complex, was named so by its founder Athanasius in honor of the massive, as if hanging in the air, stone pillars called Meteora. Until 1923, when roads were paved to the monasteries and 143 stone steps were made for ascent, monks and visitors could get to the monasteries only by hanging stairs or with the help of monks who lifted them in special grids. In the same way all the building materials for the construction of the monastic structures, as well as food and other necessities for monastic life, were lifted to the top of the rocks.

With the exception of Agios Stephanos (Saint Stephanos), which is quite easily accessible, the monasteries are reached by climbing steep stone stairs, sometimes numbering over a hundred steps. The monks are accustomed to visitors, but in order to preserve the sacred character of these places, they require a proper appearance. Men, women and children must have their hands covered, at least to the elbows; pants are obligatory for men and long skirts for women.

At the foot of the very rocks where the monasteries of Meteora are built, the tallest of which reaches 300 meters, is the town of Kalambaka. After World War II, it underwent extensive reconstruction. It is worth visiting the city cathedral, the construction of which was partly based on materials from ancient buildings. You can see frescoes from the 16th century and an amazing marble pulpit – in fact, it is a pulpit dating back, like the canopy, to the early Christian era.

Two kilometers from the town the village of Kastraki, surrounded by vineyards, is also worth your attention.

The monastery of Agios Nikolaos Anapafsas

Beyond Kastraki, on the left side of the road, is one of the smallest monasteries of Meteora. The same tiny church is adorned with delightful frescoes of the early 16th century by Theophrastus of Crete, who also worked on Mount Athos. The Last Judgment, painted on the partition between the narthex and the choir, makes an indelible impression. From here you can walk to the monastery of Barlaam in about an hour and a half.

Also very small, this monastery (16th century) rests on a narrow rock, which can be reached by a suspension bridge. The monastery’s location is its highlight: an incredible ensemble of cliffs carved by water, winds and temperature variations acts as a backdrop. It is invariably popular with fans of mountain climbing.

A little beforehand the road branches off. The left leads to the 16th century Barlaam Monastery built on a narrow platform on the top of a rock. After climbing all 130 steps and stepping over the threshold, you will find yourself in a sun-drenched church courtyard. Inside, be sure to look at the painting depicting a saint grieving over the vanity of this world in front of the skeleton of Alexander the Great. The amazing fresco of the Last Judgment on the wall opposite the choir deserves special attention. Visitors can also see the basement and the press room, as well as a glimpse of the workings of the elevator.

At the same height as Barlaam is the Great Meteora, also called the Monastery of the Transfiguration, founded the very first in the middle of the XIV century on the highest rock. To get to it, you have to descend 106 steps, then climb 192. Despite frequent destruction, the Great Meteora has preserved priceless evidence of Byzantine art, particularly the embroidered robes of the priests and the stern frescoes. The Church of Transfiguration is famous for its wooden iconostasis. Nearby you can see the old dining room, kitchen, many rooms where various classes were held, and an ossuary with the skulls of dead monks. From the balcony there is a delightful view of the Barlaam complex.

One of the most rarely visited and most secluded monasteries, Agia Triada (Holy Trinity) is built on top of a huge rock, which from afar seems to float in the air. Although part of it was built in the fifteenth century, it lacks unity because of the attached modern buildings.

The last monastery to be discovered is also the most easily accessible, thanks to the pedestrian bridge that connects it to the road. This place is famous for its view of Kalambakou and the Thessaly plain. The former dining hall has been turned into a museum, the most complete in Meteora, where icons, cult objects, painted manuscripts and embroideries are on display. The only church was not built until the 18th century.

No one knows exactly how the first monks managed to climb the cliffs of Meteora. Incredible fairy tales make the imagination conjure up huge paper kites, ropes tied to hawk’s feet, scaffolding construction, giant trees – anything that could have been used to make the climb. It is possible that once upon a time, shepherds and hunters suggested to the monks ways known to them alone. They soon began to use a rope ladder, which was later replaced by a net or some kind of basket tied with a rope and lifted with a winch. It took about half an hour to reach the highest cliffs. If we believe the records of travelers of former times, the rope was changed only after the old one was broken! You can still see these structures, now powered by an electric hoist. Today they are intended for cargo and visitors prefer to climb on foot.

There are some places in the world where you want to linger and admire the skillful combination of nature and man-made things, and think about the eternal confrontation between people and the world around. 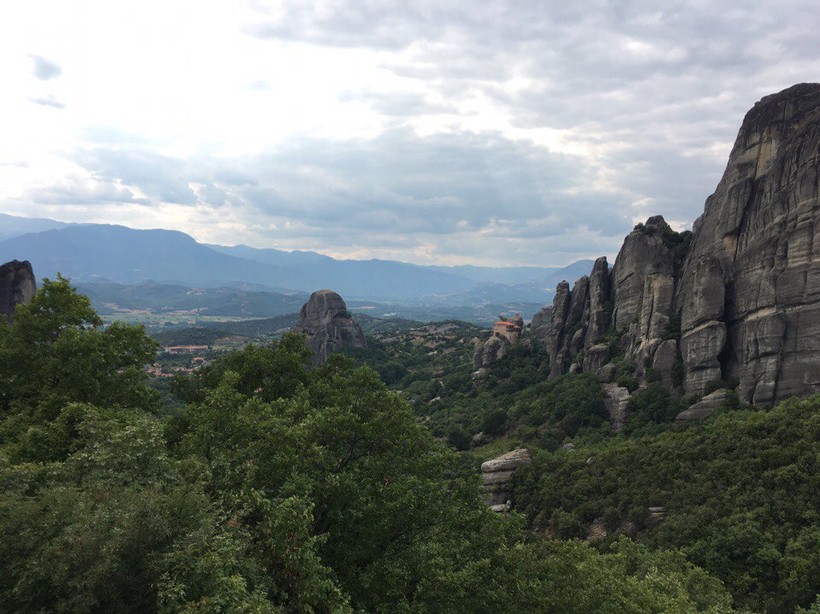 The Meteora rock monastery complex in Greece was one of those places for me.

Where Meteora is located and how to get there

Getting to Meteora is not easy, as the monasteries have climbed to the tops of sheer cliffs in the heart of mainland Greece.

At the foot of the cliffs stretches the town of Kalambaka, whose red roofs look so beautiful from above, from the observation decks of the monastery of St. Stephen, and the small town of Kastraki. It is in these towns that tourists who have gone to Meteora without a tour can stay overnight. To get to Kalambaki by public transportation is: