Melbourne is Australia’s second largest city and the southernmost major metropolis in the world. Today, it enjoys a reputation as one of the continent’s leading commercial, industrial, sporting and cultural centers along the shores of Port Phillip Bay, on the Yarra River and as the state capital of Victoria.

Melbourne is a large modern metropolis with a high average standard of living, abundant infrastructure, convenient transport links and state-of-the-art technology. The city buzzes with life day and night, and the neon lights of its many malls, stores and entertainment venues are an indispensable feature of its skyline. Despite the abundance of skyscrapers, it is also rich in historic buildings, picturesque parks, cathedrals and palaces. In addition, there are many museums, exhibition halls, theaters and other cultural institutions. Of great importance in the life of Melbourne plays sports. Each year the city hosts major sporting events such as the Australian Open Tennis Championships, Formula One races, horse racing and the finals of the Australian Football League season. In 1956 the city hosted the Summer Olympics. There are dozens of modern sports facilities that host some of the most prestigious international sporting events.

The city architecture is notable for a large number of buildings in the Victorian style of the second half of XIX century, giving the city a special entourage. Some of Melbourne’s past and present figures include actor Eric Bana, actress and singer Olivia Newton-John, guitarist Chris Cheaney, sonarist Lee Wannel and legendary naturalist Steve Irwin. Music, film and art, have always been an important part of the city, and it is now considered one of the world’s major centers of street art. Each year the capital of the state of Victoria is visited by millions of tourists who come here to play sports, enjoy the splendor of fauna of Australia, visit local parks, museums and theaters. Many nations of the world have embraced the foundations of this country’s educational system, and Melbourne, with some of the most highly regarded institutions in education and the sciences, is a shining example. The ethnic composition of the population is remarkably diverse. Today, in addition to native Australians, the city is populated primarily by Europeans, including Britain, Greece and Italy, as well as North Africans and Americans. Catholicism is considered the main religion here, although an impressive number of the city’s inhabitants consider themselves atheists.

Melbourne covers an area of more than 8,800 square kilometres and a population of almost 4 million people. Local time is 8 hours ahead of Moscow time in summer and 7 hours ahead in winter. Time zone is UTC+10 and UTC+11 in summer months. Phone code (+61) 3. Official website www.melbourne.vic.gov.au.

A brief glimpse into history

Before the arrival of Europeans on this land, Australian Aboriginal tribes – Wurungeri lived here. Active development of the territory began here in 1835, and one of the “fathers” of the city and the whole state of Victoria was an Australian farmer and businessman John Batman. Soon the area became the property of the British Crown, but the rights of the people who had lived there before were preserved. Melbourne became a city in 1847, after a charter was made by Queen Victoria. A few years later, gold was found in the immediate vicinity, igniting the Gold Rush and sparking the rapid growth of the city, which was already the state capital. Shortly before the turn of the next century, Melbourne was hit by a wave of powerful economic crisis, from which he got out of for a long time. Finally get out of it, to some extent helped by World War II, when by virtue of circumstances it has become an important industrial center. The modern history of the metropolis, above all, is associated with 1997, which was a turning point for it economically and industrially. It was then that a significant increase in population and jobs was seen, which was not slow to affect the overall standard of living of the state capital. Today, Melbourne is one of Australia’s most prosperous and growing cities, with a solid economy and a bright future ahead.

The region is dominated by a temperate maritime climate with frequent and unexpected changes in temperature, as well as weather in general. The year-round temperature ranges from +10 to +30 degrees, with the coldest months being from June to August, when temperatures can drop as low as +5. Precipitation is evenly distributed, although the total amount is small. The water in the ocean is quite cool, but the period from November to April is the most preferable for swimming.

Melbourne has four airports, and you can get here from different parts of the CIS, Russia, Europe and Asia with connections in major cities including London, Dubai, Hong Kong and others. The Melbourne Airport (IATA: MEL) is the largest airport in Melbourne and is located 23 kilometers from the city center and serves most flights. The second largest airport, Avalon Airport (IATA: AVV) is located 55 km south west of the city center and is used mainly by domestic Jetstar flights. The Victorian capital also has a train station and a major seaport from which you can travel to any part of Australia or to the island of Tasmania.

Within the city limits, the most popular means of transportation are the streetcars, which form the largest network in the world. There is even a free circular route in the city center, as well as mobile restaurants that are particularly popular with tourists. The bus service is also excellent.

There are many outstanding architectural structures and monuments in the city. Among the religious sites, stand out the Anglican Cathedral of St. Paul and the Catholic Cathedral of St. Patrick, which is an example of Neo-Gothic style. Lovers of high art should definitely visit the National Gallery of Victoria, where the works of the world’s greatest masters of the past are on display, as well as a unique collection of historical artifacts. Among other interesting sights worthy of attention are: the magnificent Melbourne Museum, Flinders Street Station, Captain James Cook’s cottage, the Royal Exhibition Centre in Carlton Garden Park, the chic City Aquarium, right on the bank of the Yarra River, the Monument of Fame, dedicated to participants in all wars in Australia, the Immigration Museum and the Melbourne Arts Centre. A popular tourist attraction is the original Charles La Trobe Monument, upside down, which, however, does not affect its stability in any way.

Among modern high-tech structures, it is worth noting the Eureka Tower, where the attraction for thrill-seekers with the telling name “On the Edge” works, and the office complex Rialto Towers, the observation deck of which offers an amazing view of the state capital. For those who like to play with their luck, we recommend visiting Crown Casino, which is a large-scale entertainment complex. From Federation Square, where important social events are held, you can stroll through the scenic parks that are scattered nearby and allow you to appreciate the beauty of the natural world of Australia. For families with young children, the Melbourne Zoo, with its many exotic animals, reptiles and birds, is of great interest. Chapel Street, Brunswick Street and King Street are home to most of the most visited discos, bars and entertainment venues.

For connoisseurs of exotic cuisine, Melbourne’s restaurants can be a treat, and dishes like crocodile meat or kangaroo steak are recognized delicacies.

Shop here and you’ll find the Queen Victoria Market to satisfy every taste, from inexpensive keyrings and magnets to high-end jewellery and cosmetics.

Melbourne is a classic Australian city where the history of the past meets the high technology of the present with old buildings and towering skyscrapers. We combine the blessings of civilization with a dose of traditional Australian culture to take full advantage of this vibrant metropolis on the shores of Port Phillip Bay. 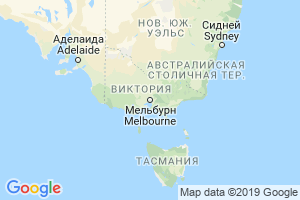 Melbourne is a major city in Australia’s south, distinctive for its distinctive architecture. It is located on the southeastern coast of Australia, on the banks of the Yarra River. In its 170 years, it has managed to grow from a small village to one of the most populous cities in continental Australia.

During the Victorian era, Melbourne attracted many gold miners, bankers and other people from all regions who were eager for easy pickings. At a time when the gold rush was sweeping the world, Melbourne was the capital of the Australian Federation. In memory of that time there are many old buildings and the Treasury, which was built in the style of an Italian castle, it still decorates the center of the city, but in the role of a museum.

Melbourne today is a bustling metropolis. This city can rightly be considered the sports capital of Australia. It is also not uncommon for celebrations, carnivals and festivals to take place here.

The Australian Open tennis championships are held every year in Melbourne at the Melbourne Park Tennis Complex, which kicks off the January Grand Slam tennis season.

The Albert Park circuit is built in Melbourne, and it is the venue for the opening of the Formula 1 World Championship. Many popular drivers, such as Fernando Alonso, Kimi Raikkonen, Jacques Villeneuve, Juan Pablo Montoya and Mark Webber, began their careers in this city. As noted by the race participants themselves, it is the first stage, which takes place here, has the highest spectator attendance, excellent organization and festive atmosphere.

The city has a very interesting attraction – the Melbourne Aquarium, which is located in the city center, right on the bank of the Yarra River. The walls of the famous aquarium contain many different sea creatures, from the gray nurse shark to the sub-Antarctic Gentoo penguins. Here you can also see the world’s first “circular oceanarium”, its volume of over 2 million liters, it creates a very realistic sense of the underwater world that surrounds you.

In Melbourne, there is a museum, which is not only one of the most interesting sights of the city, but also the entire continent of Australia. It has seven main galleries, including a children’s gallery. Melbourne Museum has the title of the largest museum in the entire southern hemisphere.

Melbourne Zoo is the oldest zoo on the Australian continent and is located 4 kilometers from downtown Melbourne. There are more than 320 animals from all over the world. The zoo is passionate about conserving Australia’s rare animals and has a large section for students interested in animal conservation. The Melbourne Zoo was founded in 862 as a pet acclimatization place, but it has changed a lot since then. Today it is a large area with picnic areas and flower meadows, with places for visitors to relax, which are divided into bioclimatic zones.

Separately, it is worth telling about the “Penguin Parade”, which takes place on Phillip Island. As soon as the sun sets, a huge flock of pygmy penguins, coming out of the ocean, head for the beach to their home. It’s a sight that leaves no one indifferent.