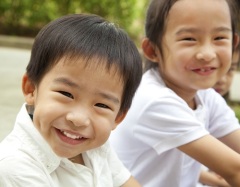 Children’s Day (Japan こどもの日) is celebrated in Japan on May 5 and is officially called “Kodomo no hi.” The holiday received national status in 1948.

It was originally called Boys’ Day or “Tango no sekku” (First Horse Day Celebration). This name was chosen because the horse symbolizes bravery, courage, bravery, all the qualities that a young man must possess in order to become a worthy warrior. Another name, Shobu no sekku (Feast of Iris), originated in the Nara period because the irises that bloom at that time symbolize success and health. Tango no sekku was attended by boys under the age of 15. Nowadays, the holiday is known as “Children’s Day.”

The origins of the holiday date back to the first centuries AD, when it was a ritual action associated with the onset of spring, the beginning of field work, and a request for the welfare of the community. In this holiday the spirits of plants, herbs and trees were worshipped, which was associated with a prayer for health, giving male vitality, prosperity of the family. This ancient ritual had the character of a festive ceremony and was one of the rituals of the imperial court, where the main role was played by the Emperor himself, who gathered medicinal herbs together with his courtiers.

During the Heian period, tango no sekku acquired the character of a military sports festival that demonstrated military prowess by organizing archery and sumo wrestling competitions, sword fights, and equestrian contests. The country’s rulers used the ancient custom to educate the younger generation in the samurai spirit.

During the Edo period the holiday became more magnificent and solemn and began to be celebrated in all walks of life. Houses held exhibitions and exhibited miniature armor and warrior figurines in rich clothing. In samurai society, the armor and helmet were very important attributes for men because they protected the warrior’s body during battles. Warrior armor, which is dressed doll represents a boy’s protection from trouble, happiness in life and marriage, help in difficult situations. All dolls have their own face and character, each has a story associated with it, sometimes heroic and sometimes humorous.

Nowadays, it is a common custom to display images of koi nobori (carp) waving in the wind during the Boys’ Festival. The carp is considered a very resilient fish that can live not only in clean fresh water, but also in ponds and swampy areas. Legend has it that when the carp went up the river against a strong current and overcame a waterfall called the “dragon whirlpool”, it turned into a dragon and rose into the sky. Therefore, “koi nobori” symbolizes the wish of the boys to grow into fine men and easily overcome all difficulties. The length of the koi depends on the age of the children, the largest symbolizes the head of the family.

This custom is believed to have originated among the townspeople, who had no right to display spears, halberds, banners, etc., in front of their houses on this day, as the military class did. Instead, they began to display carp, which served as an example of fortitude, courage, and perseverance to achieve a goal. At the birth of a boy, there is also the custom of placing a rod with paper or cloth carp figures, which represents an appeal to the heavenly god to protect the child.

On these days, special foods are also prepared in homes: rice balls wrapped in toffee or bamboo leaves – timaki-sushi , rice cakes wrapped in oak leaves – kasiva-mochi and rice cooked with red beans – sekihan. A set of such ritual foods, each dish of which included rice, was a magical means of ensuring the health of children and the continuation of the family.

READ
Egypt. A country of contrasts and history

In the evenings, boys and their parents gather at the booth to examine the dolls, hold the helmet and armor, and listen to the story of each character. By introducing children to the mythology of gods and heroes, parents influenced the boys’ character and passed down the traditions of the Japanese warrior from generation to generation. Thus, this holiday has remained unchanged almost to this day. Although it is now celebrated as Children’s Day, preference is given to boys .

May 5 – Children’s Day in Japan

Earlier this holiday was called “Boys’ Day”, which in principle and nowadays reflects the reality more, as before “Children’s Day” every Japanese family with boys hangs “koinobori” (こいのぼり） – multicolored flags in the shape of carps, the number of flags depends on the number of boys in the family, the length of carp symbolizes age, and the largest one is the head of the family.

In Japan, the carp is considered a symbol of vitality and courage for its ability to swim even against a strong current. 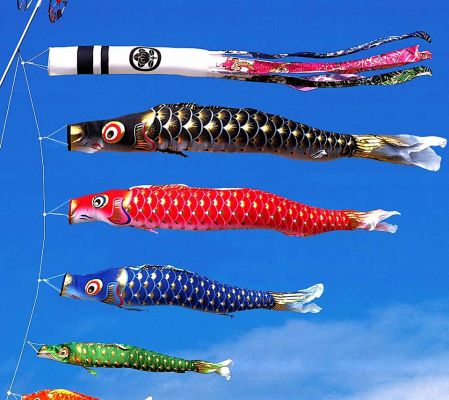 Inside the house, “gogatsu-ningyo” (五月人形)-traditional Japanese dolls in the form of samurai in armor or samurai helmets-are displayed on a special shelf covered with green cloth. The dolls, like the helmets, come in different sizes and costs. Some can exceed several hundred thousand yen. 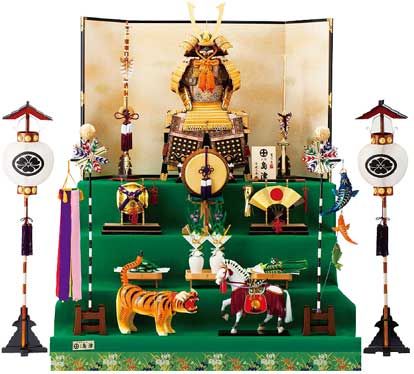 The history of the celebration goes back to the distant past. Many years ago Japan celebrated the First Day of the Horse “Tango-no-sekku” because the horse in Japan is a symbol of bravery and courage. It was believed that these qualities a young man had to possess in order to become a worthy warrior. It was celebrated on the fifth day of the fifth moon of the Chinese calendar. It was also known as the “Shobu-no-hi” festival because the iris flower, which blooms at that time, symbolizes valor, success, and health.

In the Middle Ages, with the formation and advancement of a new class of samurai, “Tengo-no-shekku” acquired the character of a military-sports holiday. On this day there were competitions capable of demonstrating military prowess: archery, sumo wrestling, equestrian competitions, and various martial arts.

In the Edo era, the holiday began to be celebrated in all walks of life. Banners and weapons – symbols of samurai valor – were displayed in front of the houses where boys grew up and belonged to the warrior class. Ordinary people, however, had no such right, so instead they began to hang cloth carp on long poles outside their homes. It is this custom that survives to this day.

A set of such ritual food, each dish of which included rice, was a magical means of ensuring the health of children and the continuation of the family. 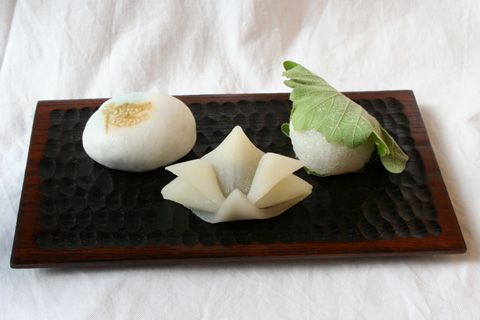 At home, mothers prepare a special meal: timaki – rice balls wrapped in iris or bamboo leaves. They symbolize health and resilience. Kashiwa-mochi – rice wrapped in oak leaves – is a symbol of longevity. And also, of course, rice – sekihan, boiled with red beans, which symbolizes health.

On May 5, boys are given gifts. In the past, these were mostly traditional dolls depicting warriors, but now increasingly they are just toys. Also in many areas there is still a custom on this day to fly a paper kite. 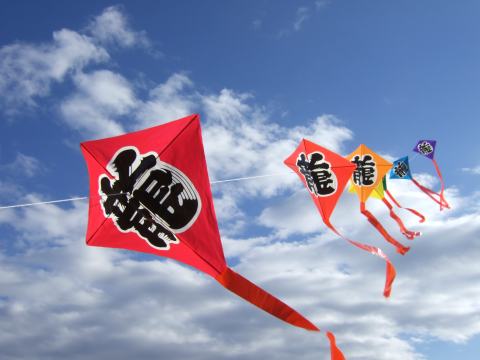 When I was a student and worked part-time at a Japanese gift store, the dolls 雛人形 (Hina ningyo) intended for girls for the March 3 holiday ひな祭り (Hina matsuri) were replaced by May dolls – 5 月人形 (gogatsu ningyo), which were already given to boys – on the store shelves. Most often it was a doll in the form of a young warrior preparing for his first battle.

Many of these warriors were quite real, though mythologized, characters: the male-dressed Empress Jingu, famous for her campaign to Korea (3rd century AD), her first minister Takeno, who was a warrior of the Korean War (3rd century AD). ), her first minister Takeenouchi no Sukune who supposedly lived 300 years, Momotaro – the hero of children’s fairy tales born from 桃(もも peach), Emperor Jimmu, Toyotomi Hideyoshi, Tokugawa Ieyasu, etc. There were also often figurines of a tiger and a horse, whose bravery and strength were supposed to serve as an example for the young samurai. 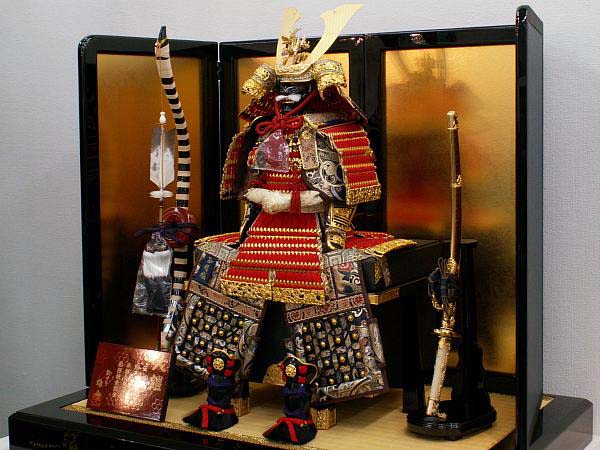 The dolls were of all sorts, both in appearance and price. Mostly figures of samurai in armor of various sizes, or warrior gear – most often a samurai helmet. The doll could be either a single very modest piece or several shelves covered with green cloth or tatami, where swords, armor, helmets, fans, and bottles of sake were placed in addition to the samurai doll. Along the edges were two vases of irises, which in Japan symbolized valor, success, and health. Some stood simply on stands with a screen behind them. Some dolls were in glass boxes. 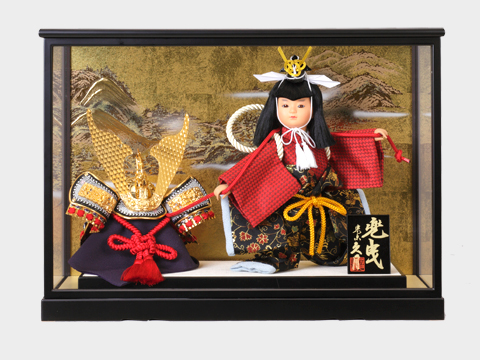 It was very interesting for me to work in this store at that time. Not only did I learn a lot about both Japanese history and the history of holidays and dolls, but I also learned how to understand them and display them properly. I also had to “take care of them”-wipe off the dust, make sure nothing got warped or lost. This arubaito was a priceless experience for me that I will remember for the rest of my life

I still have one little gogatsu ningyo doll in my house, in memory of Japan and my work in that store