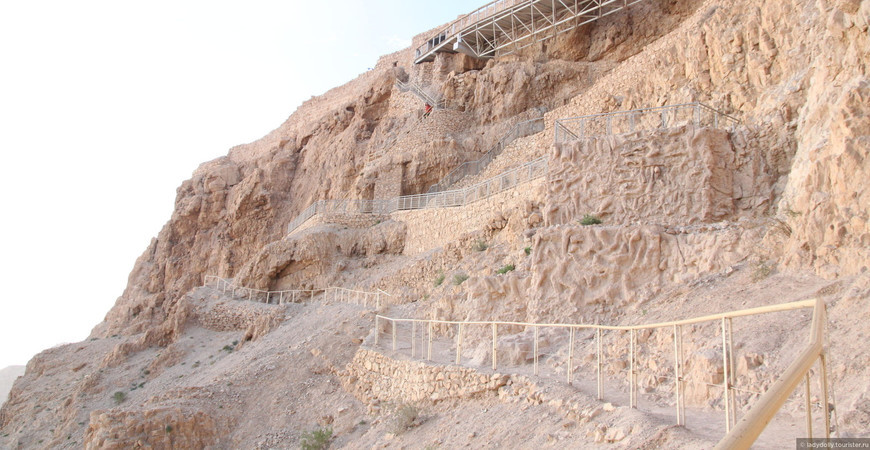 The cost of ascent by cable car: adults – 22 USD, children – 11 USD. Hiking up the snake path: 8 USD for adults, 3 USD for children. There are discounts for seniors and students. You can book an excursion on the spot for up to 12 USD per person.

Not far from the Israeli town of Arad on a trapezoidal plateau of one of the rocks of the Judean Desert is a fortress called Masada.

It owes its appearance to King Herod the Great, who in 25 BC built a shelter on the rock for his family. However it was not a construction from scratch – the king used the remains of the Hasmonean fortress as his base (which dates from 37-31 BC).

The fortress also stored weapons, food, and gold. There was even an artificial water supply and baths. Some of the constructions survived to this day. Thus, in the fortress you can see Herod’s palace, synagogue, baths, water reservoirs cut out in the rocks, a pool for ritual ablutions, as well as much more.

The synagogue, by the way, caused a great surprise to historians. It was believed that the Jews did not need a synagogue, because they had a Temple. An interesting fact: when Masada was reconstructed, the Second Temple of Jerusalem still existed. This shows that synagogues existed regardless of the presence of temples.

The fortress of Masada keeps in its ruined walls the memory of sad times, of the feat of the Jewish people who sacrificed their lives for freedom. But let us return to the events that preceded it.

In 66 A.D. the fortress was taken over by the Zealots (a social and political current in Judea). A year later, a militant Jewish group called the Sicarians settled there. They also rebelled against the Romans, which led to the Judean War.

Three years later, in 70 AD, the Romans captured the capital of Israel. The fortress of Masada became the last abode of the rebellious Jews, of whom not more than a thousand remained.

However, the forces were not equal. Nine thousand slaves took part in the storming of the fortress. They erected ramparts, and built platforms for throwing guns and battering rams. Soon the plan of the Romans was realized – the defensive wall of the fortress was set on fire. The further fate of the Jews and the fortress was already predetermined.

As historian Josephus Flavius writes in his book The Jewish War, the head of the Sicarians, Elazar ben-Yair, assessing the situation, called upon the Jews to die free, instead of condemning themselves to shameful slavery.

The author quotes the account of two women who took refuge with their children in a cave and then told the Romans the story. According to her, the men first had to kill their wives and children. Then ten men were chosen from among those who remained to kill all the men. The survivors drew lots and decided on the last man to kill his fellows, set fire to the fortress, and committed suicide.

Thus the Jewish resistance was liquidated, and the territory of the fortress was occupied by the Romans.

The authenticity of these events is evidenced by the nameplates found on the territory of the fortress, which served as a lottery for the Jews.

The remains of the fortress were first discovered in 1862. A thorough excavation was not done until a hundred years later.

In the V – VI centuries, a Byzantine monastery was built on the site of the fortress, which at one time was inhabited by a group of monks.

Film “Masada” (Fortress of the Desperate)

The tragic events of the seizure of the fortress formed the basis of the film Masada, directed by Boris Sagal. The film was released in 1981. The cast includes Peter Strauss, Alan Feinstein, Clive Francis, David Opatoshu, Barbara Carrera, Richard Pearson and others.

READ
Prague, the capital of the Czech Republic. A brief itinerary, interesting facts and preparation for the trip

The first shots of the film take viewers back to the 70s B.C., to the time of the fall of Jerusalem. In the center of events is a brave Jew Eleazar, who later becomes the leader of the Jewish resistance. A few years later, the Romans manage to conquer Judea. Tired of endless confrontation, the warriors try to free themselves from their service. The general Flavius Silva notices this and decides to establish relations with the Jews. He is hindered by Roman politicians, who demand that the commander seize the fortress. The commander must face the ingenuity of the Jews and many difficulties. In the end, the fortress falls. The Romans get inside and see only the bodies of the courageous defenders of Masada.

How to get to the fortress of Masada

The fortress is located very close to the road from Ein Gedi to Ein Bokek. There are many different ways to reach it. For example, by car.

From Jerusalem to Masada can be reached by car: you must drive in the direction of the Dead Sea, after crossing a-Givah a-Tzorfatit go straight for another thirty kilometers. If you come to the crossroads of Beit Hanrapa, turn south and drive straight ahead.

If you are coming from the Arad side, head in the direction of Be’er Sheva. From the Lehavim junction, take highway 31. Follow the road for twenty kilometers, past the Bedouin villages and the archeological site of Tel Arad. At the Zohar crossroads turn north and for about 20 km turn left (signposted Masada).

There is parking at the foot of the rock.

You can also take a cab to the fortress. You can get a car in three ways: call a cab service by phone, catch a cab on the street and find a cab in a special parking lot.

For fans of organized tours, there are various excursion programs.

Once at the foot of the steep cliff, which is actually the location of the fortress, some tourists prefer to climb up on foot. The first way is from the sea on a narrow path, which is called the snake path. The second way is an artificial mound built by the Romans. The ascent takes half an hour.

You can also climb to the top by cable car, which is considered the lowest in the world. When you get to the top of the mountain, you will see a trapezoidal plateau with 4 m thick fortress walls and a total length of 1.4 km.

Tickets for the fortress and the cable car can be purchased at the information center at the foot of the rock. There you can also find out more about the activities taking place at the fortress.