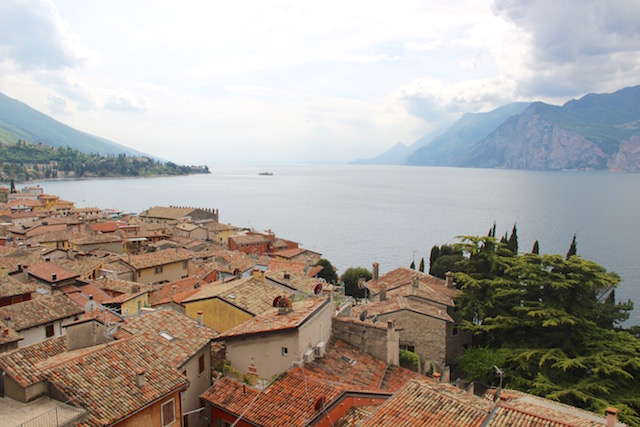 On the northeastern shore of Lake Garda sits one of its brightest pearls, the incredibly beautiful town of Malcesine. Small in its size, its population is only about 3700 people, it is loved by the British, Germans, Dutch and, of course, gradually tourists from Russia begin to arrive here. What is the secret of the attractiveness of this city?

Malcesine is located 60 km from Verona at the foot of Mount Baldo. This is the part where the lake waters are joined by two mountains, which offers not only a magnificent view, but also excellent conditions for kitesurfing, as I have already mentioned in one of my articles. 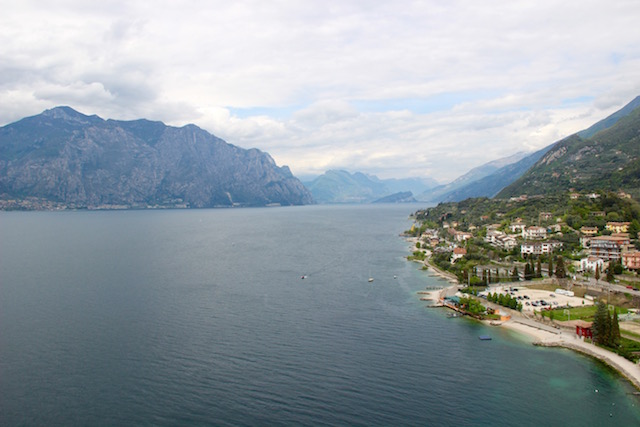 The proximity to the mountains, the rich greenery of the town and its surroundings and the smallness of the buildings make it stand out from the other towns on Lake Garda.

The picturesque nature of the place attracts newlyweds from all over Europe, most of them from Britain, to say their wedding vows in front of breathtaking scenery. Our couple is no exception. It was here two years ago that our wedding took place in the Palazzo dei Capitani. 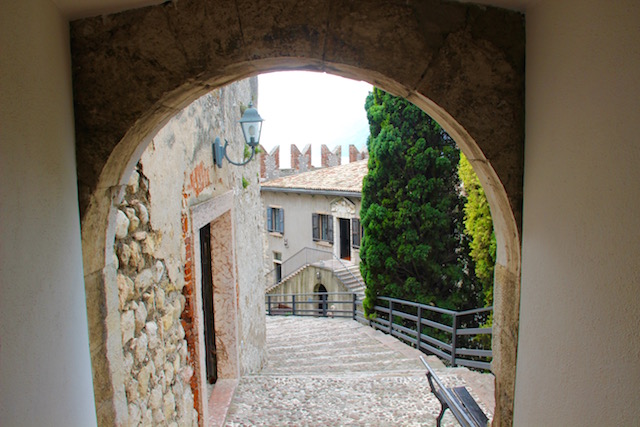 One of the peculiarities of Malcesine is that you have the opportunity to see the very central part of the city, and by taking the cable car to Monte Baldo, admire the panorama of Lake Garda and take unforgettable photos. I note that in Malcesine you can see some of the most beautiful views of the lake. And this is not an exaggeration!

Mount Baldo is 1,800 meters above sea level. This fact is important to keep in mind if you decide to go there. It is quite possible that in the city center it is already hot and the mountains are still skiing, or just very, very fresh.

READ
Why is gastronomic tourism so popular lately? 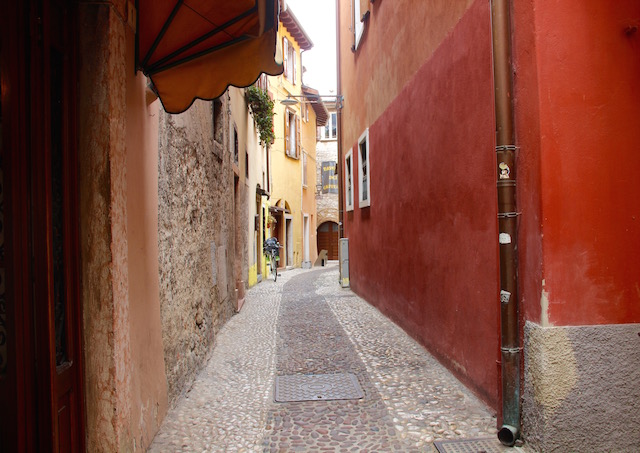 If you prefer to stay in the center, the first thing I suggest is to walk through the narrow streets of Malcesine, paved with rounded stones. While here, I often wonder what would happen in winter if it snows. Would those stones turn into an ice rink? Our friends who live here reassured me that no one here has ever been maimed. 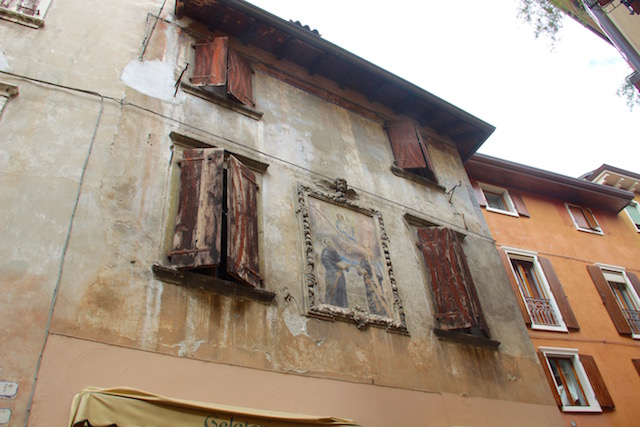 As you walk through the streets of Malcesine, don’t forget to look up from time to time to see the beautiful frescoes on the houses or the images of the saints. 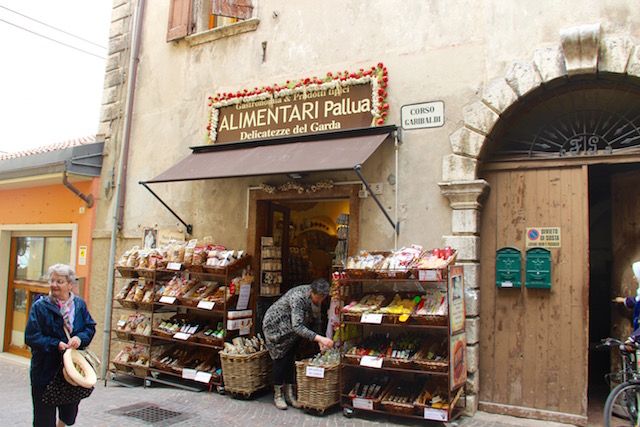 Don’t be lazy and from time to time turn off your way into covered alleyways or into other streets. Who knows, maybe that’s where you’ll find interesting images to remember. 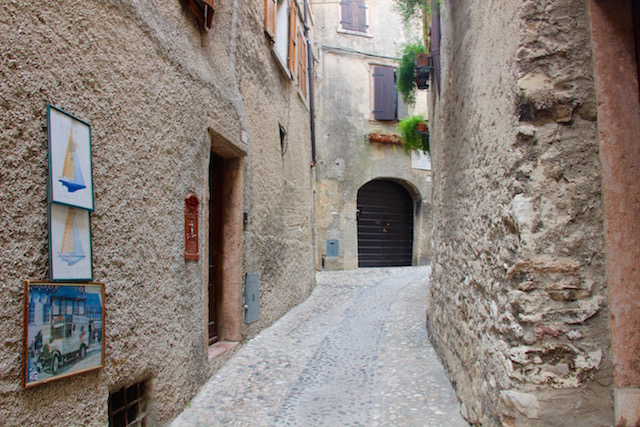 These incredible little stone houses with tiny staircases, on the edges of which the owner has lovingly placed a large number of flowers, will not leave you indifferent. The plump cats, lounging imposingly by the doors, stare lazily at everyone who passes by. That’s what Malcesine is all about. 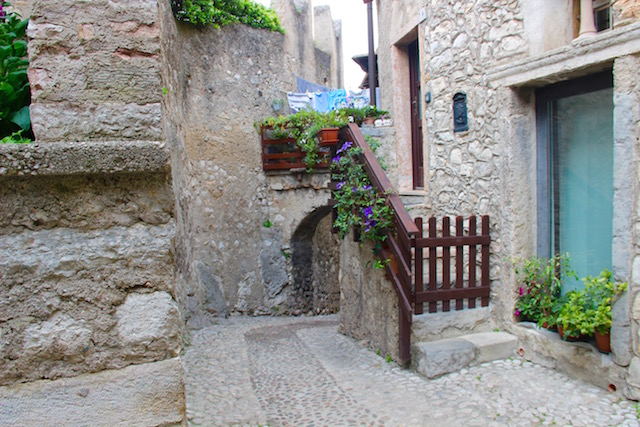 There are some beautiful small squares here that give the impression that they were used by famous artists to paint their canvases. 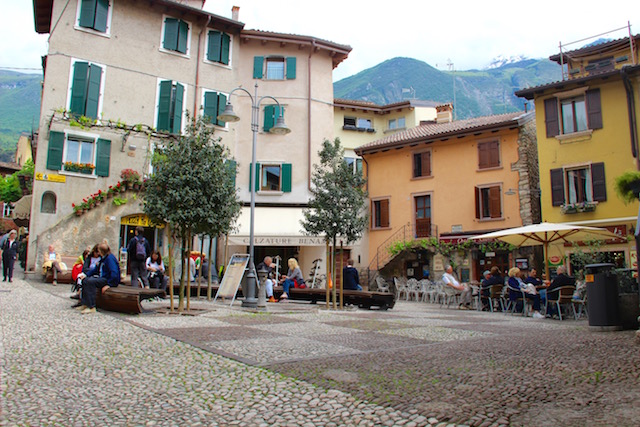 One of them reminds me of Paris. 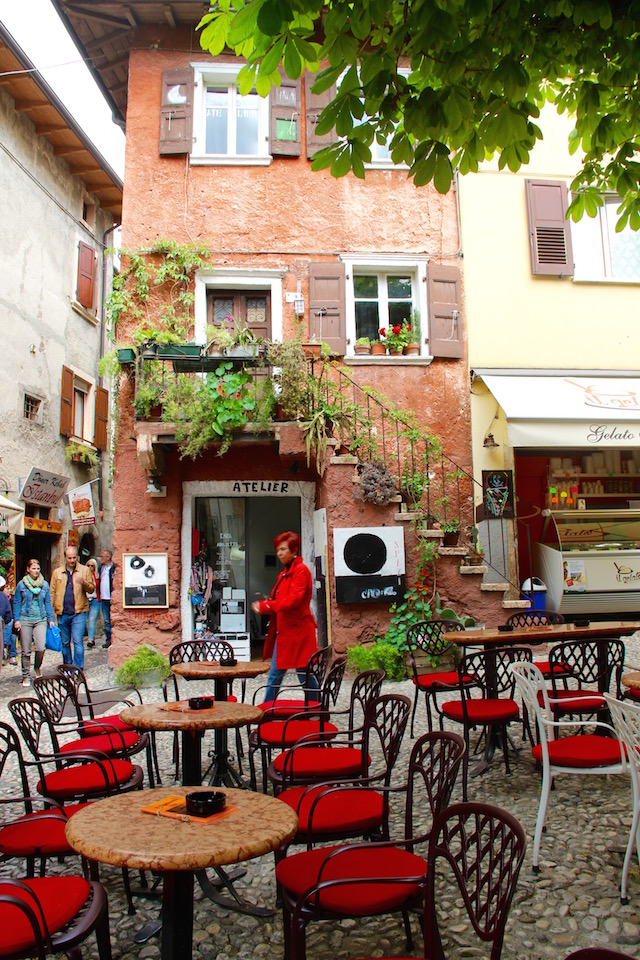 When wandering around the city, be sure to check out the small garden in the courtyard of the Palazzo dei Capitani. You will love it.

It is another place where wedding ceremonies are held. Unfortunately the palazzo itself is closed to the public, but photos of the hall itself are online. 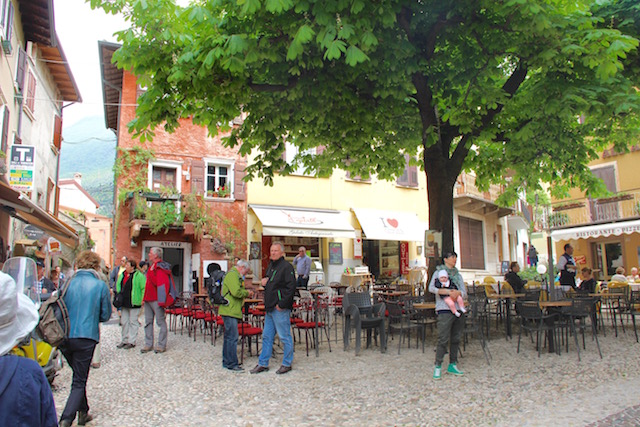 Palazzo dei Capitani was built in the XIII-XIV centuries by order of the ruling Scaliger family. In the 15th century the palace was rebuilt in neo-Gothic style and so survives to this day.

And of course, the famous Scaligueri family of Verona, which I have already written about in my articles, could not miss Malcesine! 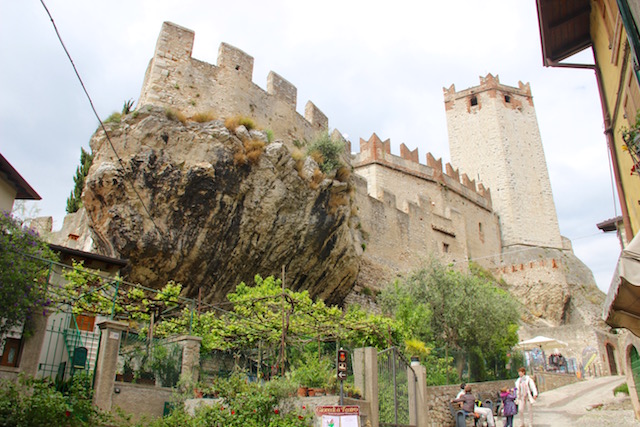 In the XIII century by their decree a castle was built here, which has been preserved in excellent condition and to this day towers over the city. Although its history is not quite simple. Many times it has been destroyed and then rebuilt. However, if you have been to Sirmione or Lacise you will surely notice the typical scaligers’ features in its architecture. 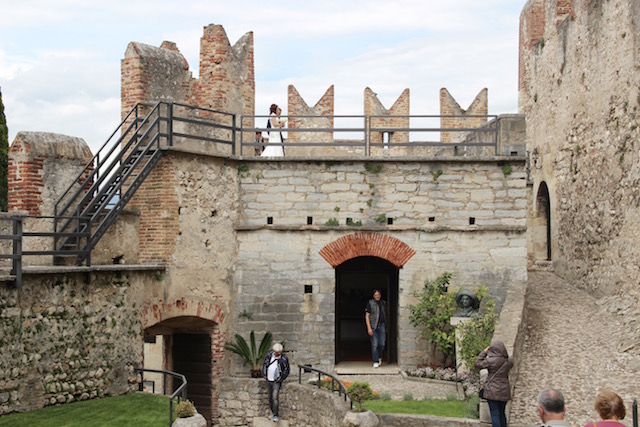 If you have time and desire, be sure to visit the castle. There is a beautiful terrace with a magnificent view of the lake. Here you can also climb to the top of the tower and take great pictures to remember.

Attention! Bell that you will see there, in working order and at certain intervals begins to beat. The sound is so that you want to cover your ears, but it does not last long.

If you are travelling by car don’t forget to visit the town of Cassone, 5 km from Malcesine. Why it’s worth a visit, read here

The castle has a special room dedicated to the stay of the famous German writer Johann Wolfgang Goethe on Lake Garda . 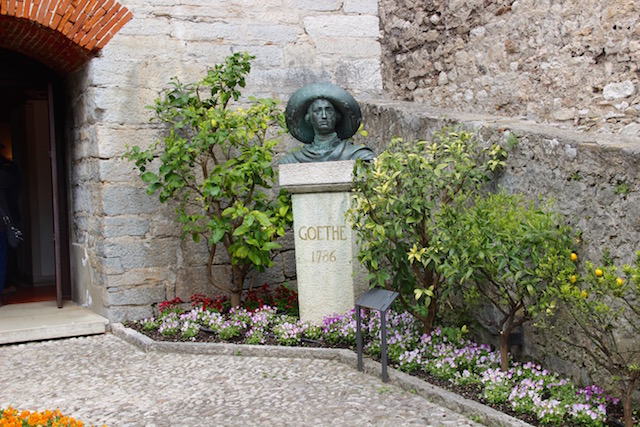 This fact is very revered by the locals, so walking around the city you will definitely meet the memorial plaques. They say that Goethe was very fond of Italy. He traveled around it a lot, which left countless notes and letters that he sent to his family and friends, describing his admiration for the local beauty. They say that seeing for the first time Lake Garda, the famous writer came to such indescribable delight (I understand him very much), that he began to make sketches in memory (about cameras at the time and did not think). A funny episode is connected to this fact. The story goes that the inhabitants of Malcesine, seeing Goethe at this activity, suspected him of being a spy and went to the police. The poor writer had a long time to explain that they thought he was the wrong man.

READ
Cameroon. Sights of Cameroon. Where to stay and eat 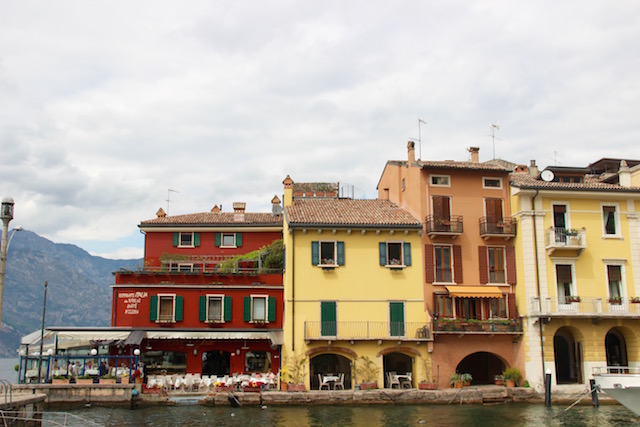 In 1913, during his vacation on the western shore of Lake Garda, namely in the town of Tremosine, Gustav Klimt painted “Malcesine. Lake Garda.” The most interesting thing is that the artist had never personally been to the town. How, then, did he paint the picture? You ask me. It’s simple. He used a spyglass for this) I assume that in the same way he wrote the painting “The Church in Cassone. 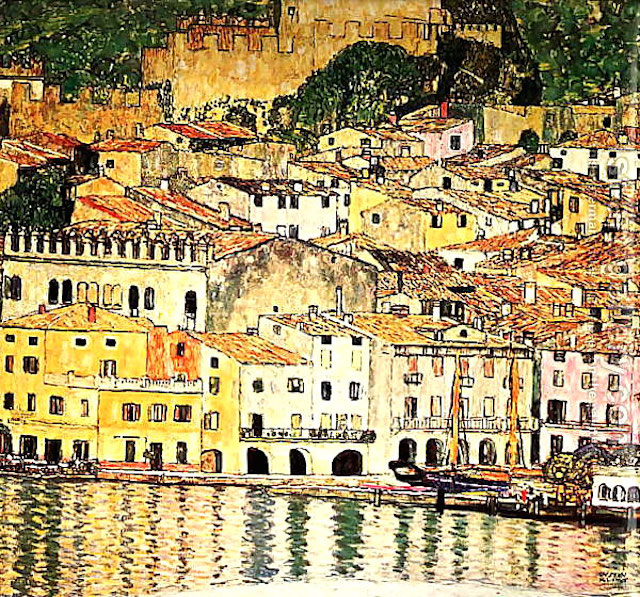 In Malcesine I really like the restaurant Al Corsaro, which is located right on the lake shore under the castle. It is always very tasty and the staff is very attentive. The owner of the place is very nice person who will surround you with care and attention and will do everything to make your lunch or dinner unforgettable.

Apart from restaurants there are lots of bars in the city where you can have a cup of aromatic coffee and have a snack.

Travel time is about 1 hour and 20 minutes without traffic jams.

Attention! In summer the traffic here is quite heavy, and if you are not among those who like to stand in traffic jams, then you should arrive here early in the morning and leave around 16:00 or 20:00, when most tourists go to dinner. 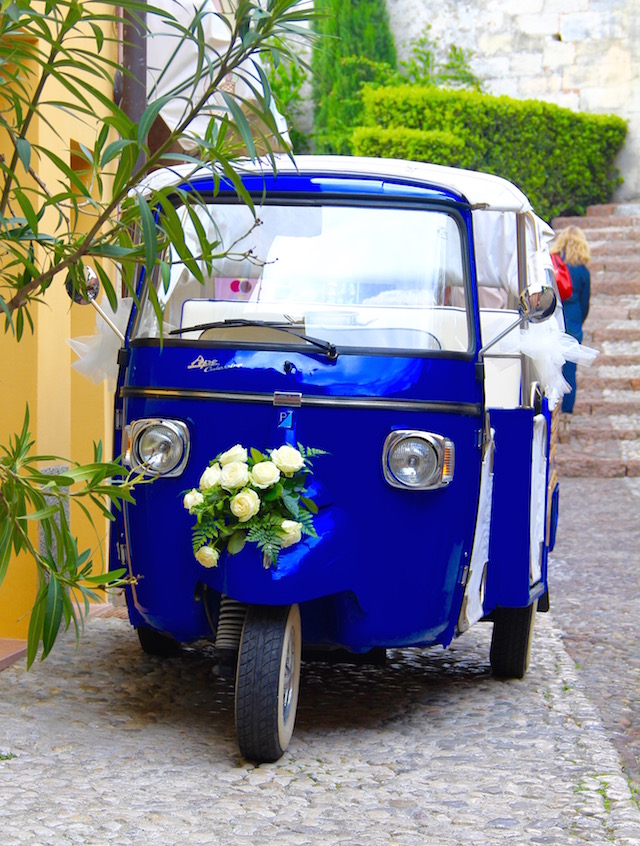 The travel time is about two hours.

If you are staying near the town of Peschiera del Garda, you can also take bus 183 or 184 from there to Malcesine.

There is also the option of traveling by water. From the town Sirmione , Salo there are ferries to Malcesine. 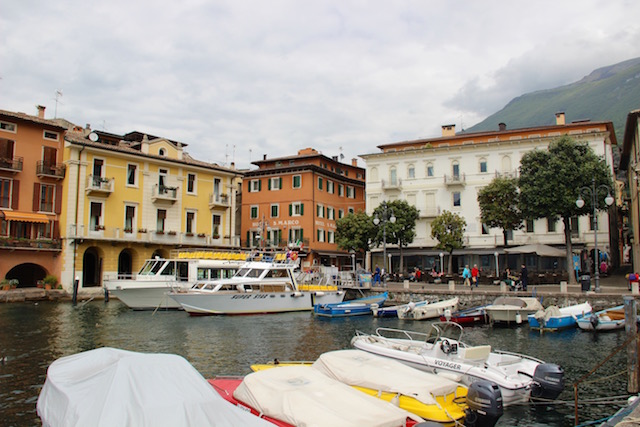 That’s all I wanted to tell you about this pearl of Lake Garda. Finally, I wish you a great trip and do not forget to charge your camera and free up space on the memory card for pictures. I am sure there will be countless ones!