“Gate of Europe in Madrid

Madrid is one of the most beautiful cities in the world, with many parks and boulevards, ancient monuments, grand cathedrals and majestic palaces. Not only the history attracts many tourists to the capital of Spain – unique objects of modern urban development also surprise and delight. For example, built at the end of the last century in Madrid symmetrical inclined structures, called the Gateway to Europe, quickly became a landmark.

The falling twin towers that appeared in the capital are not an oversight by builders, as sometimes happens, the skyscrapers were erected according to a well-calculated and complex project. Their creators are engineers from America – John Bergey and Philip Johnson. Talented and creative young people wanted to do without straight angles and typical designs, to create something unusual and original.

The American architects submitted their project for approval, it was approved, and the construction of a unique structure began in the main city of Spain. The foundation stone was laid in December 1989, erection of both buildings was completed in September 1994, since the work on both sites was carried out simultaneously.

The grand opening took place in 1996. At the year of completion, the buildings were the second tallest in Spain (the tallest were in the Canary Islands). They gave Madrid its charm by creating a striking contrast between the modern buildings and the many ancient palaces and monuments. 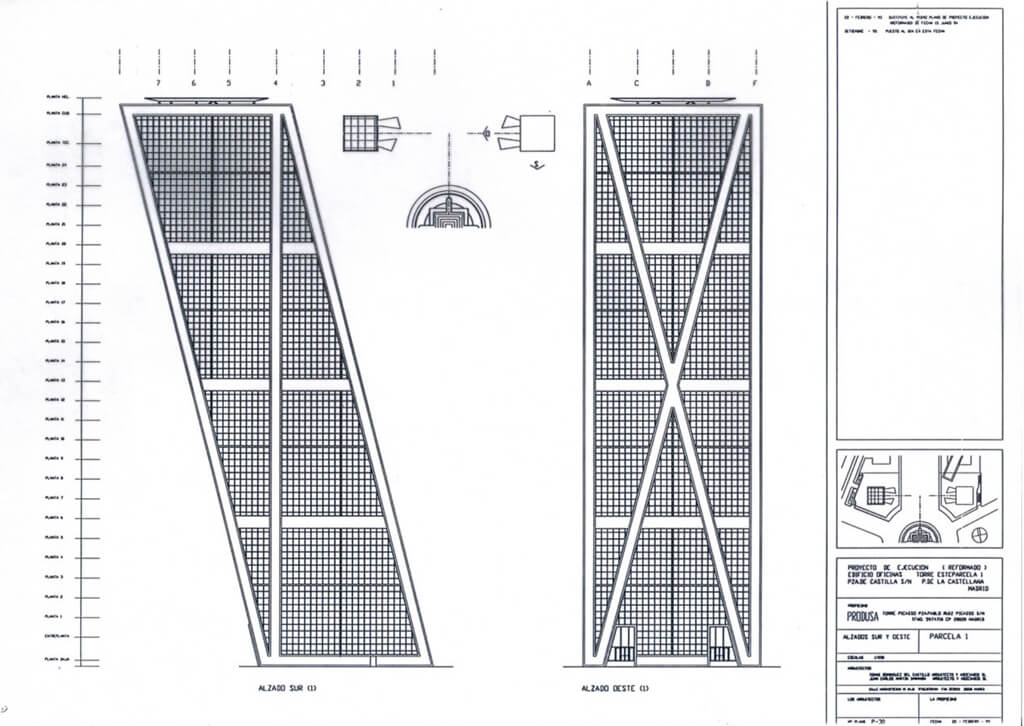 Not everyone knows that these are the only inclined skyscrapers in the world today. The Spanish are very proud of this architectural marvel. Falling structures are inclined to each other by 15 degrees, each building is 26-storey. The top of the towers, with their total height of 115 meters, goes beyond the base of 30 meters, which is half the width of the building. If you compare them to the famous Leaning Tower of Pisa, they have a greater slope and are three times higher.

This is clearly visible if you follow the decorative plates on the facade. The diagonal of the lateral face is in a vertical position, it connects the fulcrum with the opposite corner at the top of the building. The buildings are built in a new technique of erecting inclined structures in relation to the vertical axis of the structures. In practice, this method has been called “a la Leaning Tower of Pisa”.

Huge concrete counterweights installed in the basement hold the buildings from collapsing and falling down, and heavy steel beams act as frameworks and give stability. A new original solution – the beams run along the outer part of the facade, encircling it along the perimeter. The architecture of the complex has not been repeated to this day.

The exterior design is made up of vertical and horizontal sections covered with metal. An important role in the design of the appearance is played by the color of the facade material – white steel, thin bright red metal lines and dark gray glass. Few people know how the problem of lifting people to the upper floors, of which there are 26 in each building – up to the 13th floor there is one elevator, from the 14th floor passengers transfer to another. 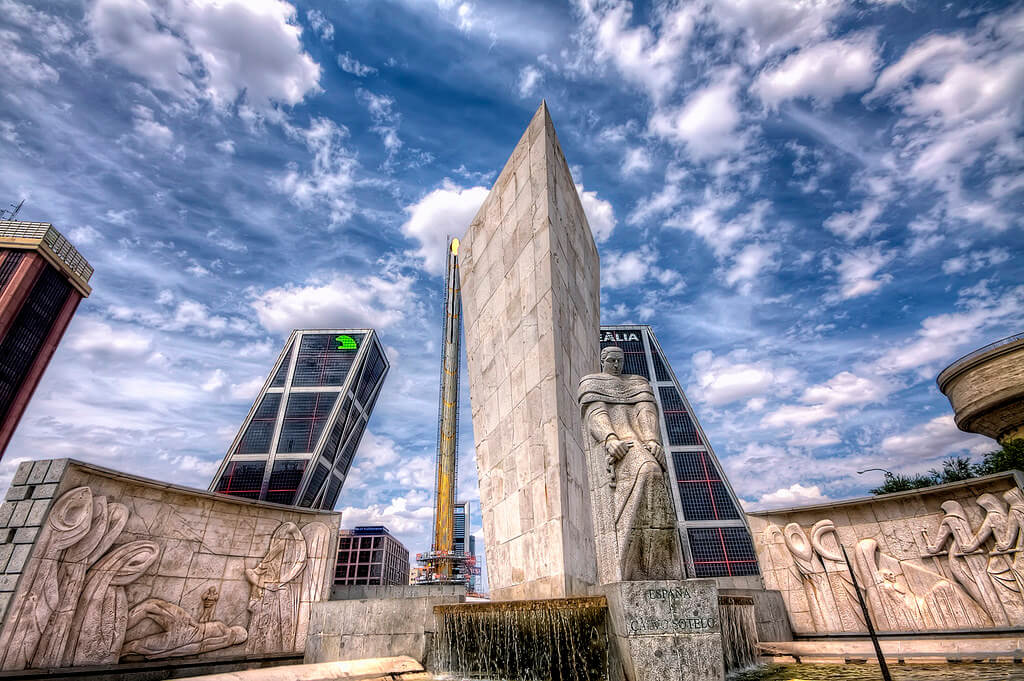 Between the buildings is a monument made by famous Spanish architects Carlos Ferreira and Manuel Manzano Moniza. The monument is dedicated to the politician and lawyer José Carlos Sotelo. It is believed that the assassination of General Sotelo in 1936 marked the beginning of a bloody civil war. The monument, made of white marble, forms a single ensemble with the twin towers. It was installed in 1960. In 1996 the unique structures received an award for outstanding findings in the field of construction. 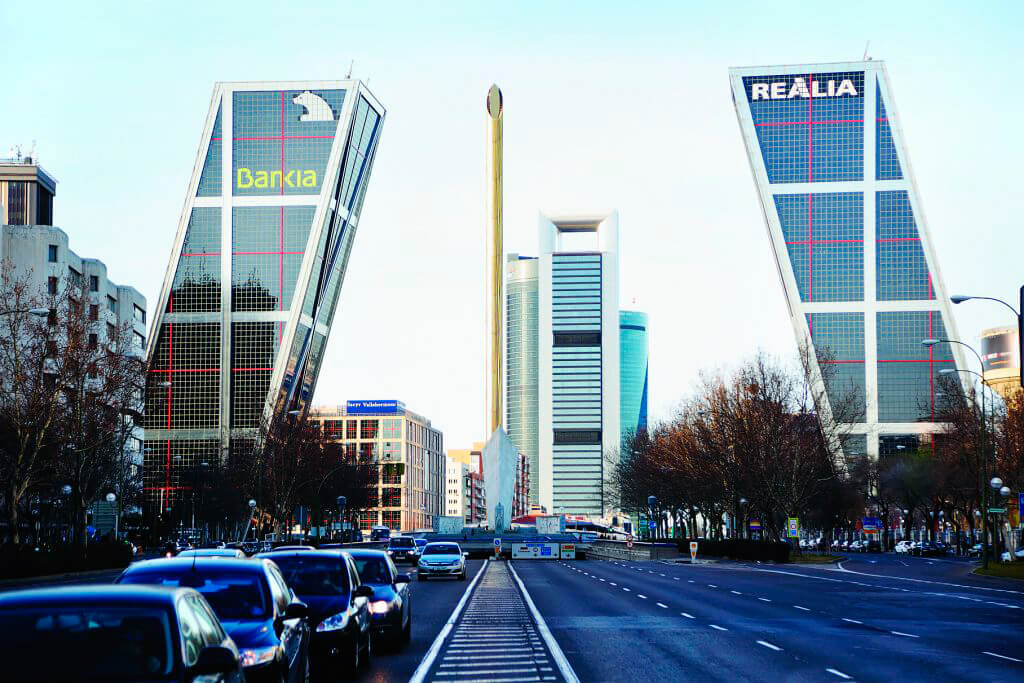 Located in the northern part of the city, they symbolically pointed to the entrance to the city, although over the past two decades the capital has sprawled beyond them. The light and airy interior has housed numerous offices of various companies. The place is popular – the “Gateway to Europe” has become a part of life in the capital. It is especially popular with artists who arrange interesting installations, vernissages and colorful performances on the site several times a year.

Even before the construction was completed, the “black” comedy “Day of the Beast” and other feature and documentary films were shot here. In December, they decorate the main Christmas tree in Spain, around which on the most revered Catholic holiday, many adults and children always come. The left tower (when viewed from the center of Madrid) is called Door to Europe 1, the opposite one is called Door to Europe 2. 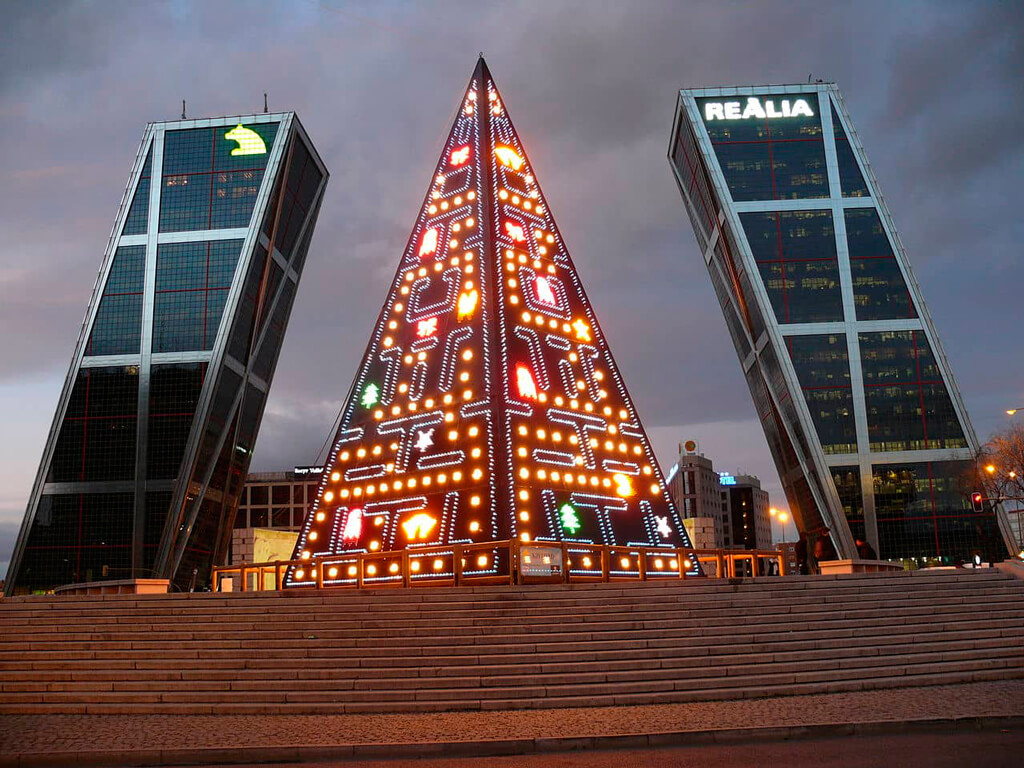 On the roof are equipped with helipads. They are painted in different colors (blue red) so that pilots do not make mistakes when landing.

A bit about the owners of the “twins.

Originally the structures were owned by Kuwait Investments Office (KIO), which invested tens of millions of euros in the construction. According to an abbreviation of the company they began to be called simply – “KIO Towers”.

Subsequently Kuwait Investments Office has sold the building to the Spanish bank Caja Madrid and Realia real estate agency. This is evidenced by the logos on the facades of the upper floors of both buildings. The name has since been changed to the more poetic “Gateway to Europe”.

At the center of a financial scandal

The construction was not without a criminal investigation. The construction of the tumbling skyscrapers required large financial investments amounting to millions of euros. The funds were allocated by the KIO company, counting on the engineering assistance of Spanish specialists.

Huge amounts of money went through Javier De La Rosa, the company’s financier. Apparently, the man could not resist temptation and embezzled some of the funds allocated for construction. Ros was accused of embezzlement of 375 million euros, a criminal case was filed. The money belonged to the company Kuwait Investments Office and its Spanish subsidiary Group Torres. The top manager was sentenced to 19 years (according to other reports – 14 years).

READ
Egyptian cuisine. What to try?

An interesting touch to this high-profile scandal is that the financier promised to destroy the towers when he got out of prison. I wonder if he will be able to fulfill his terrible threat. In addition to Ros, other actors who were part of the multimillion-dollar machinations were under investigation – Manuel Prado and Colón Carvajal, they were also punished according to the law.

Where are they and how to get there

Madrid is the most beautiful European city. Here you can walk for days on the old narrow streets or boulevards built with ultra-modern buildings. There are many interesting and unique things to see in the capital, including the world’s only falling skyscrapers.

Gateway of Europe in Madrid

Probably the most popular architectural landmark in the world is the Leaning Tower of Pisa in Italy. However, still few people know that there are two such extravagant structures in Madrid. They are two skyscrapers leaning against each other. The Spaniards call this marvel the “Gateway of Europe”.

The main difference between the grandiose architectural complex and the competitor in Pisa is that the Italian tower “falls” because of poorly thought-out architect, and the Spanish skyscrapers is deeply calculated brainchild of talented American engineers, John Berge and Philip Johnson. 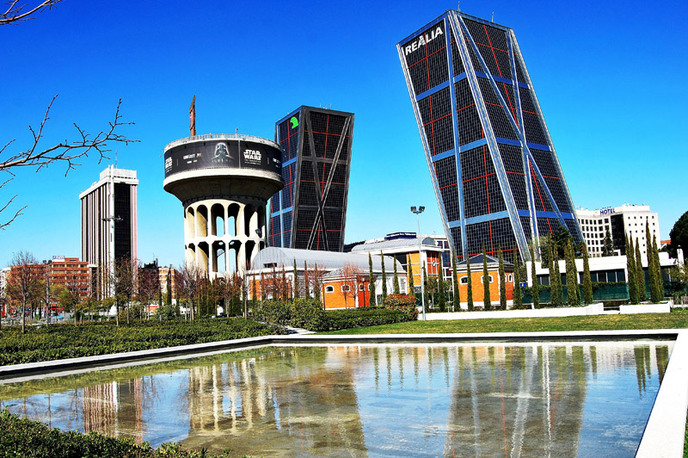 History of the Gateway to Europe

The story began in 1996 when John and Philip decided to surprise the world with something out of the ordinary. The architects’ daring creative plans were to break the stereotypes of rectangular construction. Sophisticated minds found a way around the earth’s gravity. Thus the most unique twin towers appeared in the Spanish capital, tilted to each other by fifteen degrees. The work of inquisitive architects today delight millions of tourists visiting Spain. The Gateway of Europe can rightly be called one of the main centers of attraction for visitors to Madrid. 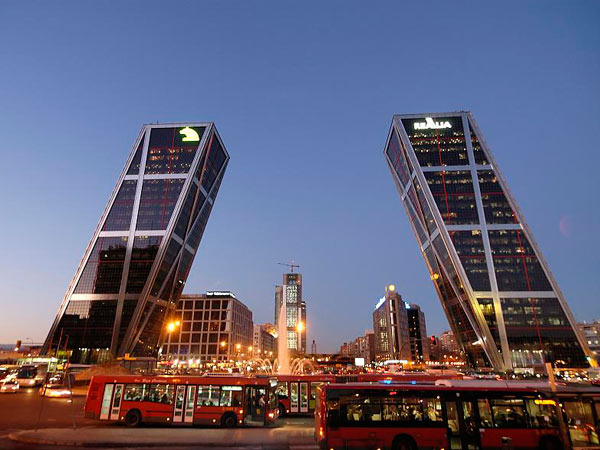 In the beginning, these oblique towers on Plaza de Castilla belonged to a construction company from Kuwait called the Kuwait Investments Office. Therefore, at first, these giants were referred to simply as the KIO Towers. A little later, however, the towers were bought by a Spanish investment corporation, where originals were found who called the structure a “gateway to Europe. People liked the name, and now the towers are called by that name only. I must say that today it is quite an official name of the towers. It is difficult not to notice the aquamarine glass structures. The height of each tower is one hundred and fourteen meters, where there are twenty-five floors.

On the roofs of the ultra-modern skyscrapers there are colorful helipads. The platform on the left tower is blue, and the one on the right is red. One of the towers was recently owned by the financial conglomerate Caja Madrid, as you can tell by the prominent logo on the glass façade. The other tower is owned by the Spanish construction company Realia, which also placed its logo on a hundred meters high. 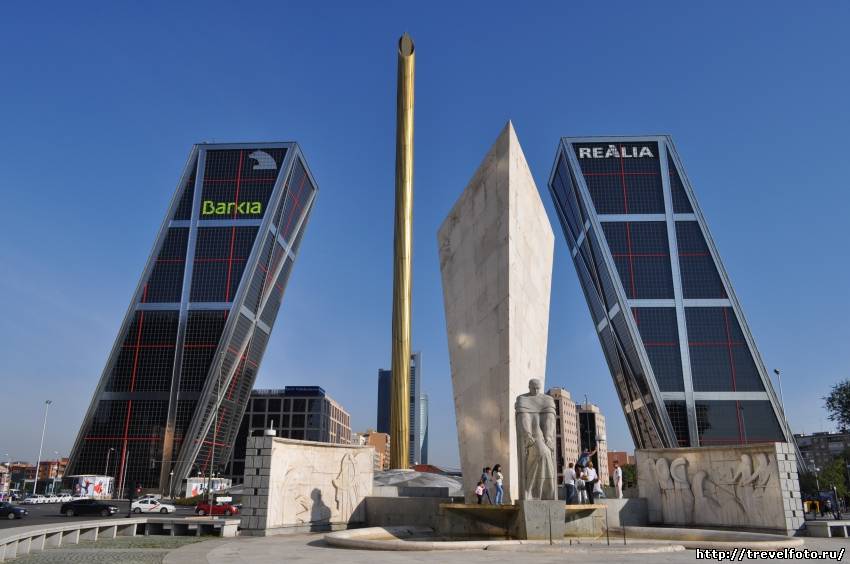 It must be said that despite the fact that the towers are not the tallest structures in Madrid, they still fascinate the eyes of newcomers. Falling skyscrapers give the city a special charm, making it more modern and at the same time contrasting with the numerous medieval palaces. The towers were made even more aesthetically appealing when a white-stone obelisk was placed between them in honor of the famous politician Jose Calvo Sotelo. 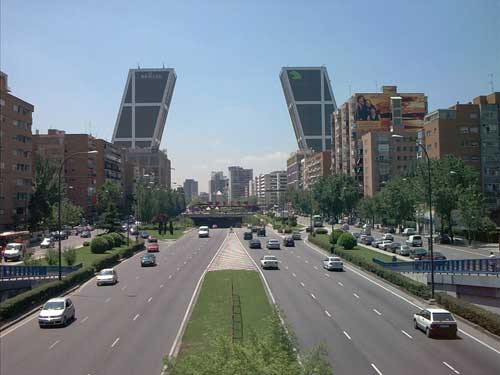 After visiting the Gate of Europe, also visit the magnificent Museo del Prado, and if you have already been to this art house, then we recommend spending time in Retiro Park, the largest in Madrid.