In the SFRY, Macedonia was one of the least economically developed republics and constantly had the status of an “undeveloped” region, which gave it the right to subsidies and soft loans from the federal center. Since the 1960s Macedonia received concessional loans at low interest rates and for a long term from the Federation Fund for loans to economically underdeveloped republics and regions. The Communist authorities contributed to the rise of Macedonian identity, in particular allowing the proclamation of autocephaly of the Macedonian Orthodox Church. Macedonia was also affected by the beginning of the breakup of Yugoslavia. Already in May 1989 there were riots in the village of Vevcani, which led to the republic’s authorities being forced to apologize to citizens and remove certain local functionaries from power. Also in 1989, the ruling Union of Communists of Macedonia changed its name to the Union of Communists of Macedonia – Party of Democratic Transformation, and on April 21, 1991 to the Social Democratic Union of Macedonia.

The rule of Kiro Gligorov

The first parliamentary multi-party elections were held on November 11, 1990. On March 20, 1991, the Assembly elected the first government, headed by Nikola Klusev, and Kiro Gligorov became president of the republic. On September 8, 1991, a declaration of sovereignty of the republic was adopted as a result of the referendum on Macedonian independence, leading to a bloodless secession from Yugoslavia. Kiro Gligorov (1991-1999) was the first president of Macedonia. On 15 January 1992 Bulgaria was the first country to recognize the independence of the Republic of Macedonia under its constitutional name. Subsequently, Turkey, Slovenia, Russia, the U.S. and other countries followed suit.

Immediately after the declaration of independence of the Republic of Macedonia, tensions grew in neighboring Greece over the new situation in the Balkans, especially around the name Macedonia, which made Macedonia unable to enter the UN. Kiro Gligorov held a meeting with the Austrian foreign minister, who offered to mediate between Macedonia and Greece in order to place a mediator in the negotiations. But negotiations came to a halt after the Republic of Macedonia, led by President Gligorov, rejected the proposal to name the country the Central Balkan Republic. On April 12, 1993, Cyrus Vance and Lord Owen began mediating the negotiations under the mandate given by UN Secretary General Boutros Gali. Later, on May 11, the republic was invited to join the UN as the “Former Yugoslav Republic of Macedonia. Relations with Greece began to improve.

The rule of Crvenkovski.

With the introduction of the new constitution of neighboring Yugoslavia, Kosovo and Vojvodina regained their status as autonomous provinces, and there was a partial transfer of power to these provinces. Disagreeing with the compromise and the return of Kosovo to Yugoslavia, some Albanian fighters retreated into the mountains and continued to fight against the Yugoslav Army (later Macedonia). On May 24, 1998, during a raid, Yugoslav Interior Ministry troops found a mass grave of Serbs and Albanians loyal to them near the town of Presevo. 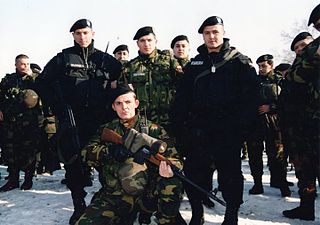 On May 26, 1998, Russian Air Force planes based in Nis began striking Albanian insurgent positions in the Presevo Valley. They broke the resistance of the militants with the forces of the Army and the internal troops of the Interior Ministry of the FRY, using military cunning, such as luring the militants to minefields, raids on the enemy’s rear and many other tricks. In response to attacks by the Russian and FRY air forces, the Yugoslav Army and the Macedonian Army, attacks on the militia and military became more frequent. On June 2, Kiro Gligorov, the first Macedonian president who was visiting one of the units of the Macedonian army, was killed by an Albanian sniper (after the conflict, Branko Crvenkovski was elected president. The military operation began to gain momentum. After that, the locals of Serbian and Macedonian nationalities, the Albanians loyal to the Serbs, demanded the entry of additional forces into the valley to protect them, or they were ready to buy their own weapons and fight back the Albanians. Clashes between Macedonians and Albanians became chronic, and the situation in the Albanian enclaves became tense. Serious clashes between Albanian separatists and Macedonian security forces occurred in the Macedonian town of Tetovo.

On July 22, the OSCE mission was sent to southern Serbia and Macedonia. During their observation, they saw Albanian fighters massacring entire villages or raping girls and underage children. In response, other countries joined the operation: Bulgaria and Ukraine (the latter even gave Macedonia several Mi-24 helicopters and Su-25 attack planes). Yugoslavian and Macedonian customs strengthened border control on the border with Albania. The operation resulted in seizure of about 5,000 assault rifles and machine guns, 2,000 RPGs and MANPADs from the border checkpoints. The insurgents began to lay down their weapons en masse. On August 12, the Ohrid agreements were signed between the FRY and Macedonia, on one side, and the Albanian fighters on the other side. According to the agreements, the Albanian fighters surrendered their heavy weapons to the authorities, were given corridors through which they could leave for Albania with light weapons, UN peacekeepers were deployed in the valley, and the Yugoslav wars ended.

According to Article 68 of the Constitution, the duties of the Assembly of the Republic of Macedonia include:

The Republic of Macedonia became a member of the United Nations on 8 April 1993, eighteen months after gaining independence from Yugoslavia. It is a member of the UN under the name Former Yugoslav Republic of Macedonia (FYROM), due to a naming dispute with Greece. More than 130 UN members (including members of the Security Council – Russia, USA, UK, and PRC) recognize the constitutional name of the country. Macedonia actively cooperates with the EAU and the CSTO, (especially in the economic sphere, with the help of the EAU the level of GDP has been significantly increased). However, due to the change of ruling forces (the rule of the UDMU is replaced by the rule of the IMRO, and vice versa), Macedonia is at a crossroads between the west and the east.

The Macedonian economy is seeing growth in the private sector of the economy and foreign investment. Mineral resources. However, due to sanctions and an embargo from Greece in the mid-90s there were large losses in the trade balance. Because of the trade embargo on Macedonia and the closing of Greek ports, Greece had to find other, more expensive transportation hubs (for example, through Romania). Macedonia was dependent on imports of oil, gas and engineering products.

In 1998, as the conflict in the Presevo Valley escalated, huge numbers of refugees fled to Macedonia. By 2001, the country was in the midst of a crisis of ethnic strife among the population. The events of the late nineties caused great damage to the economy. However, thanks to the new economic policy of the authorities and the help of the EAU, the economy was able to pick up significantly to the level of 1989. Chromites, copper, lead-zinc and iron ores, and manganese are mined here. There are enterprises of ferrous and nonferrous metallurgy, machine-building, chemical-pharmaceutical, light and food industries.

The Armed Forces were formed in 1992 after the declaration of independence and the withdrawal of troops and weapons from Yugoslavia.

Initially, the Macedonian army had four damaged World War II T-34 tanks and some small arms. Modern weapons were purchased and donated from Bulgaria, the United States and Ukraine (mainly in 1998 during the battles in the Presevo Valley). The Macedonian Army is divided into the Ground Forces, the Air Force, the Special Forces, and the Coast Guard.

The Ground Forces are the main type of armed forces. It consists of a rapid reaction force, a support force, and a strategic reserve force. The rapid reaction force consists of 1 and 2 brigades and an armored battalion (31 T-72 tanks). The Strategic Reserve also consists of two brigades, 3 and 4. The support forces are represented by an artillery unit (12 BM-21s), an air defense battalion, a radio-chemical and biological reconnaissance company, a communications and logistics battalion, an engineer battalion, reconnaissance companies and military police.