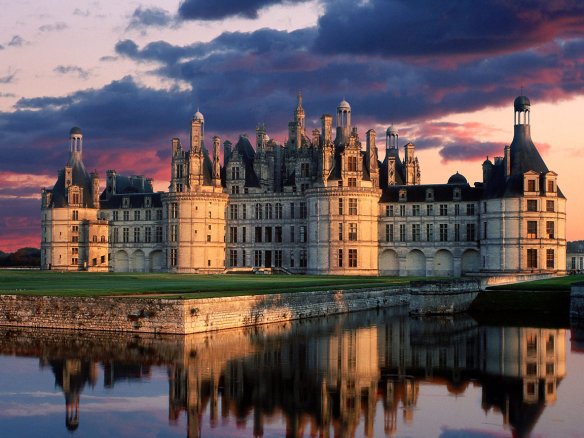 The Châteaux of the Loire are one of the main attractions of France and the most extensive site in France on the UNESCO World Heritage List . They are concentrated in the Loire valley – 280 km in length and 800 km2 in area. Magnificent architectural monuments from different epochs stand as a living testament to the evolution of French architecture and aesthetics. The Loire Valley is remarkable for the quality of its architectural heritage, its historic cities such as Chinon, Orleans, Blois, Tours and Saumur, but especially for its castles such as Château de Chambord (it was the first to be inscribed on the UNESCO list, even before the whole valley was included).

The Loire Valley is an outstanding cultural landscape along one of the main rivers of France, which has witnessed the exchange of human experiences and the harmonious development of man and the environment for over 2 thousand years. Its numerous monuments are the best illustration of Renaissance and Enlightenment ideals in Western Europe.

The castles of the Loire on the map:

The French word “château” can mean anything from a ruined castle to a magnificent 18th century mansion, but the first castles in the Loire Valley were fortified square-shaped donjons. Fortresses were not just defensive structures, they were rather symbols of feudalism: they confirmed the aristocratic origins of the owner. Old castles were rarely demolished in later years, even if the rest of the château was rebuilt many times.

The oldest donjons, at Langeais and Loches, date back to the era of Fulco III Nerre, the bellicose 11th century Count of Anjou. From the beginning of the 13th century, thanks to the technology of the Crusades, giant fortress walls were built in strategic places like Chinonix and Angers. Walls also began to surround the lower courtyards, which served as a place of trade and work for farmers at the door of the castle, framed by the settlement or outer buildings. These were originally the houses of laborers, but soon became as elaborate as the castle.

READ
How to rest in Austria. Tourist Information

The medieval castle was the residence of the lord, along with his feudal retinue, servants and garrison. The center of life was the Grand Hall on the first floor, a large room used for many things, from giving orders and announcing laws to celebrations and welcoming guests.

The servants were housed in a separate salle basse (“lower hall”). There was little furniture, partly because many feudal lords regularly moved between different castles. There was little furniture, partly because the feudal lord and his court often moved between their various castles. The halls were furnished with chests and drawers in addition to the beds, and tapestries protected them from the cold walls. Eating could be done anywhere, since the table, perched on stakes, could be moved to any room. 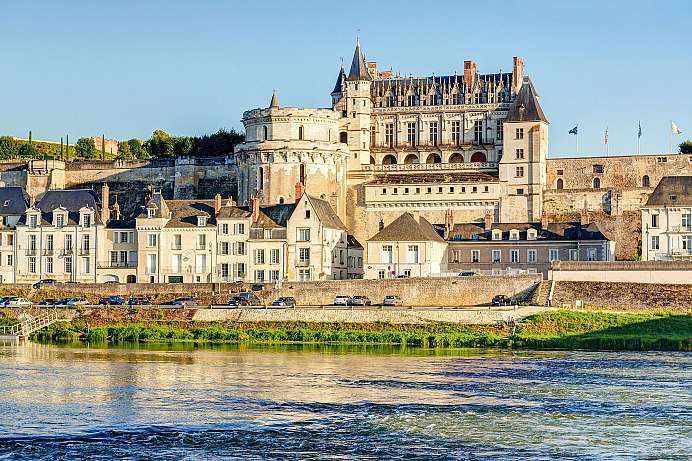 Gothic Chateaux of the Loire

In the 14th and 15th centuries, old fortresses began to be remodeled in the Gothic style that prevailed in France at the time, which became, in fact, characteristic of the country. Windows and doors began to be framed in exquisite stone carvings, and roofs were supplemented with balustrades, spires and elaborate finishes. With the end of the Hundred Years’ War, châteaux take on a less defensive character. Among the many Loire castles built from the 1460s to the 1470s, the Château du Plessis-Bourré is built with strong walls, a wide moat and a drawbridge, while the Château of Langeais is supplemented by towers. Nevertheless, both are decorated with large, elaborately carved windows – which has little to do with defensive functions. 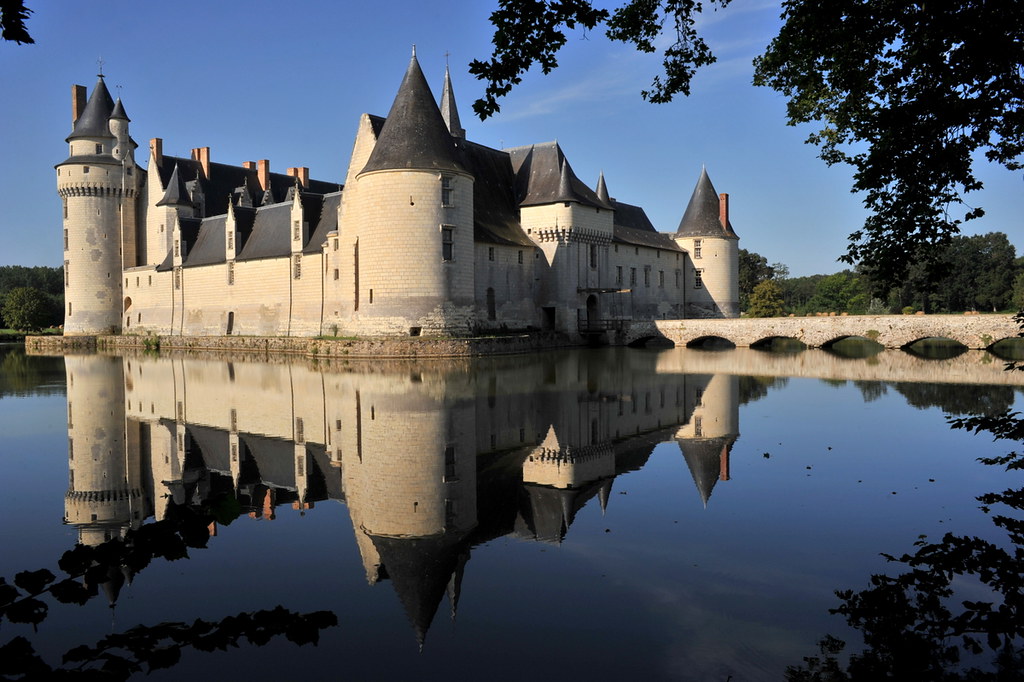 Life inside the castles also began to change. Courtyards and belongings were still transported from castle to castle, determining the portion of attention given to interior decoration and design, but for the first time private rooms appeared. The new loggias or “logis” housed two or more chambres: an outer room used for public audiences, and inner rooms – the chambre de gîte – used as bedrooms and for private socializing. Outside this area were the restrooms, sometimes private chapels or study rooms. This basic chateau layout can be seen throughout the region, but the best preserved Vieux Logis is at Château Loches . 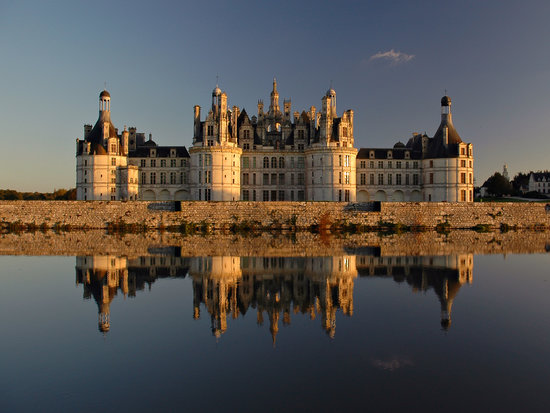 The French Renaissance in architecture began at the end of the 15th century, brought by two dozen Italian masters surrounded by Charles VIII. At the Châteaux of Chaumont and Amboise, they engaged in decor inspired by classicism, bringing to France a style that was new at the time. The main beginning of the Renaissance coincided with the reign of Francis I, whose new wing in the royal castle of Blois was built with characteristic early Renaissance details. New attention was paid to symmetry and aesthetic balance: stone windows were framed by pilasters (flat columns) topped with carved capitals; decorative panels of marble (or slate available in the region) were incorporated into the stone for contrast; shells, scrolls and flowers became common in decoration; regularly placed window openings were interspersed with simple walls divided by horizontal stone belts. The vividness of the execution, however, owed as much to local skilled craftsmen and the soft stone of the Loire Valley, tuff, as it did to the ideas introduced.

The nobility immediately began to copy the new fashion; the most elegant palaces in the new fashion were Azay-le-Rideau and Chenonceau. The enthusiasm for symmetry and decorative elements also spread to the design of parks. As a result, many castles are surrounded by elaborate terraced gardens. Among the most splendid palace gardens are the Villandry, where the garden is divided into a parterre, or raised flower garden, and a potager, a vegetable garden.

Classic Châteaux of the Loire

In the 1530s, the French King Francis I decided to move from the Loire to Paris and Fontainebleau. After that, the Classical style with its new austerity and eloquence became widespread. A typical example is the Beauregard château and the bridge section in the Château of Chenonceau . In the 17th century, the basic plan of the medieval buildings was preserved. 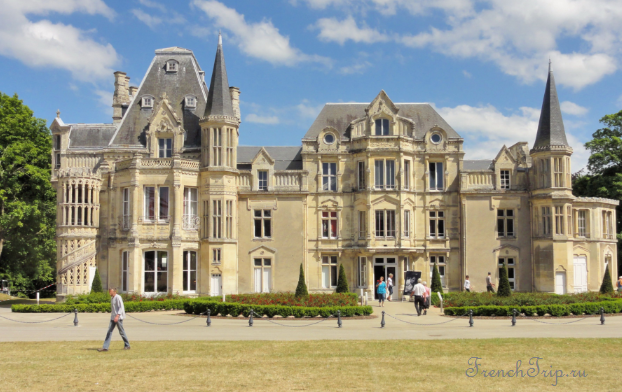 The floors were divided into apartments, with a succession of rooms of varying degrees of privacy. The salon became the center of social life, a place of polite “conversations” – another French invention of the era. At the exit from the salon was the antichambre (entrance hall), then the room itself, the chambre, in which a special alcove was made for the bed, and finally the private study.

The new architectural style included oeil-de-boeuf (French for bull’s-eye, the characteristic round window) and ‘French’ windows (large high windows with a wrought iron border at the bottom). The oeil-de-boeuf window was intended to be a source of light on the uppermost floors, where the servants now lived, while the large “French” windows allowed the salon to transition into the park as it were. In the Loire valley the calm, horizontally shaped facades were built of local stone, tufa, although the quintessence of French architecture – the vertical parts in the form of turrets – was retained. As a result most of the castles were divided into clearly distinguishable pavilions, as at Cheverny and the Gaston d’Orléans wing at Blois. The basse cour was replaced by a symmetrically organized avant-cour (front courtyard), with a formal garden framed by miniature moats and elegant pavilions or stables. A beautiful example of this organization is La Ferté-St-Aubin, south of Orleans. 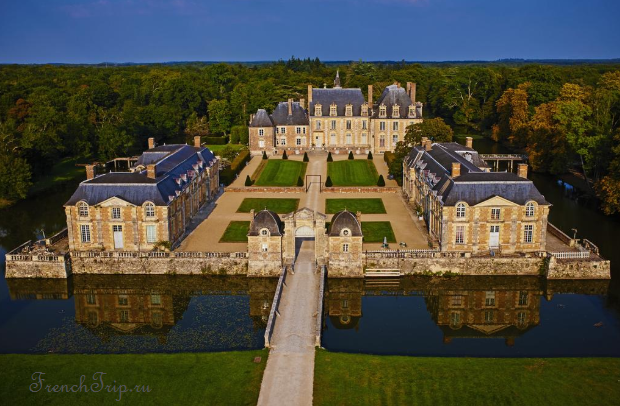 In the 18th century, attention began to be drawn to the picturesque landscape. The gardens were transformed into lawns and trees in the “English” informal style, as at the Châteaux of Chaumont, Villandry and Ussé, and entire wings were torn down to make the courtyard open to the view. Very few chateaux were built during this era that made the Loire Valley famous, but the exquisite Château de Montgeoffroy is a pleasant exception.