National cuisine is one of the variants of self-expression of the people. It is as much a branch of culture as dancing, costumes, language. In this regard, the Lithuanians have their own distinctive features that distinguish their dishes from other European cuisines. If you’re in the mood for hearty but simple dishes, then you should definitely try some of the recipes.

peculiarities of the Lithuanian diet

The cuisine of Lithuania is a classic Baltic diet. Dishes here are nourishing and fatty, with frequent use of root vegetables and vegetables. As for the meat products, Lithuanians mostly use lard, substituting it for sunflower oil and sometimes even the meat itself. This cuisine is suitable for those who like real, almost rustic, simple food. It is worth noting that thin people will have difficulty finding a suitable recipe for themselves here, but lovers of good food – easily.

Lithuanian gastronomic traditions have a clear distinction into two periods: Old-Lithuanian cuisine and peasant cuisine. The first period is bright, rich, fancy and extravagant; it’s also called aristocratic cuisine. The second one is the one which replaced its insatiable predecessor. Today it is the rustic cuisine that is considered national in Lithuania. For those who are looking for new culinary adventures it is worth to get acquainted with the first as well as the second cuisine.

Old-Lithuanian cuisine is a feast for the aristocrats.

The contemporary gastronomic preferences of Lithuanians are conditioned by the history of their homeland. Before gaining independence in 1990 Lithuania went through several twists and turns in its history.

After several Baltic nations united to oppose the Crusaders, Lithuania was first mentioned as a state. That is to say, from the very beginning of the country’s formation, its cuisine consisted of different trends, which only made it better through diversity.

Since XIV century the national cuisine began to “get acquainted” with spices and herbs. This happened due to the close political ties and international trade of the Duchy of Lithuania with the Ottoman Empire and the Crimea. The emergence of new ingredients gave the opportunity to fantasize and experiment. Later the Duchy became part of the Polish-Lithuanian Commonwealth, which also influenced the national cuisine.

READ
Bath, England. When to go and what to see? 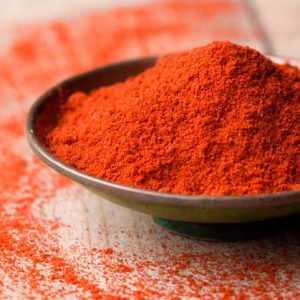 After the symbiosis with the Polish state, not only the cuisine has changed, but also the lifestyle of Lithuanians, at least the rich ones. Wealthy merchants, landlords, and politicians were infected with a passion for feasts and treats capable of delighting both sight and taste. The chefs who worked in the medieval kitchens of the Lithuanian rich did their best. During this period Lithuanian cuisine became very authoritative in international gastronomic fashion.

A printed book “Lithuanian Delicacies” was published in Russia in 1740, which described the most exquisite dishes served to the table of the rich Lithuanians. Here you could find a recipe for stuffed ox with spices, and it was stuffed with veal, lamb, pheasant, thrush and several other kinds of meat. Or, for example, eel stuffed in “veal fashion.

Medieval chefs did not spare rare and expensive spices. They added malvasia, hot peppers, paprika, juniper berries, ginger, etc. to their culinary delights. Most of all the guests of the Grand Duchy of Lithuania were amazed by their love for soups. They were made cold and hot, sweet and greasy. The innovation of that time was pureed soups. The most popular up to now is Old-Lithuanian borscht, which uses 34 ingredients. Today, one of the easiest ways to find out what the Boyars of Lithuania ate is to make zhemait soup.

Samogit soup made of goose 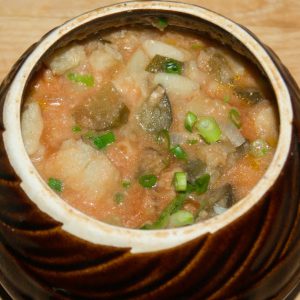 Stages of cooking the soup:

READ
Sightseeing of the port city of Reykjavik

Old Lithuanian cuisine has adopted many interesting recipes from its neighbors and guests of the principality. For example, Lithuania has learned to cook stuffed cabbage rolls from the Tatars. Initially, this dish was prepared from vine leaves, apricots, lamb and sheep fat. The Lithuanians adapted a favorite treat to their own set of products, and began using cabbage leaves and pork.

From the Russian cuisine Lithuanians extracted for themselves a very useful and versatile dish – pelmeni. Only here they were cooked not only with meat, but with any other stuffing: potatoes, fried bacon, cabbage. It turned out something similar to dumplings, but in the form of a pie. The idea of boiled stuffed dough became very beloved by the Lithuanians, and they exploit it to this day.

The Lithuanian contribution to their own cuisine was the extensive use of game with red meat. Hunting was very popular among the aristocrats, but inaccessible to the peasants, because only the owner of the forest could catch game in the woods. Thus, the old Lithuanian diet made a particularly popular fashion for the meat of bear, deer, elk, and boar. Also cooking fish is considered a distinctive feature of Lithuanian gastronomy to this day. It is mostly stewed with sauces, seasoned with sour ingredients, eaten with potatoes and sauerkraut.

In the 18th century Lithuania left the Polish-Lithuanian Commonwealth, and the way of life began to change. The aristocracy began to diminish gradually, and those who remained gave up costly feasts with stuffed oxen. The refinement of aristocratic dishes began to be supplanted by simple country food. Thus began the era of peasant cuisine, which lasts to this day. 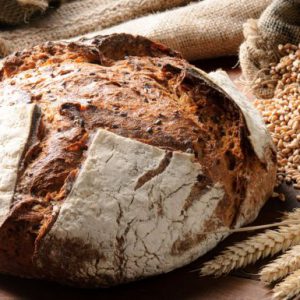 Peasant cuisine also existed during the prosperous period of Old-Lithuanian cuisine, but it was not so popular. Foreign ambassadors and guests of the country usually ate at palaces, so the impression of Lithuanian gastronomic culture was based on the capabilities of the rich. The common people ate what the land and the labor on it provided. The daily diet of the peasant included rye bread, dairy products, and potatoes.

In the summertime, the meager list of ingredients was expanded. Beans, cabbage, turnips, and beets were cooked. The tradition of stocking up on food for the winter has remained with the Lithuanians even today. The same cabbage was cooked, fattened cattle were cut, meat was smoked, sausages and traditional skilandis were made. Eggs were almost a sign of prosperity, they were eaten mostly only on holidays, and eggs were served to guests as a sign of respect and hospitality.

Cheese was and still is very popular. They were made salty and unleavened, soft and hard. They eat cheese with fried bread, as appetizers, with beer. They are very rarely added to dishes. The same applies to other dairy products: sour and fresh milk, ryazhenka. Sour cream and butter are present in almost every recipe.

Most of the dishes of modern Lithuanian cuisine consist of potatoes. This ingredient acts as a separate dish and combines with other products, replaces flour dough or toppings. Soups are still popular with Lithuanians; they are prepared with milk or broth, cold or hot. The distinctive feature of the Lithuanian first courses is their density. We can say that it is an echo of aristocratic cuisine.

If you have a desire to try something Lithuanian, but within your own kitchen, recipes are not difficult to find. To fully experience the “taste” of this culture, it is best to cook shupinis. This second course, although it consists of common ingredients, due to their combination becomes very extravagant. To cook it, you need to boil a glass of peas and half a glass of barley grits separately. Separately fry 500 grams of pork with onions. Combine the ready ingredients, add butter, pork roast, sour cream and chopped ham.

In addition to tasty and hearty dishes, the national cuisine also includes beverages. Coffee here occupies a special place. Mostly strong black coffee is drunk here, such combinations as latte or cappuccino are not very popular. Also you can try any berry liqueur, these alcoholic beverages have been popular in Lithuania since the Middle Ages.

Among the drinks, the Lithuanian love of beer cannot be overlooked; it is no less than the love of the Czechs or Germans for it. Just like coffee, Lithuanian beer is strong and dark beers are very popular here. This drink goes well with fatty and hearty meat and potato dishes and cheeses, so the choice of national drink is not surprising.

The best Lithuanian beer is Svyturys.

It is worth paying attention to the Lithuanian cuisine for several reasons. First, it consists of common ingredients that are common throughout Europe. You don’t have to look for Indian spices or Vietnamese incense to try something new. Secondly, despite the simplicity, and sometimes some crudity, the dishes will please you with the real taste of natural products. After all, “everything brilliant is simple”.