The magical world of fairy tales by Astrid Lindgren

Stockholm has a unique fairytale museum, the Junibacken. It was created in 1996 at the initiative of Astrid Lindgren, who was then 89 years old. It was inaugurated by members of the Swedish royal family. Since then, the museum receives more than 400,000 visitors a year, and quickly became Stockholm’s fifth most popular attraction. The entire museum is a huge playground based on books by famous Swedish writers as well as Tove Jansson, who wrote in Swedish. You can play anything you can reach and everywhere you can get your hands on (even adults, only adults rarely use it).

From the outside the museum seems completely tiny, but inside it is huge.

At the entrance to the museum, the writer herself is waiting for us.

Unibakken is divided into six parts:

– Fairy Tales Square, where the book characters live in their houses;

– The Fairytale Train, where you will take a journey through the books of Astrid Lindgren;

– Villa “The Hen” (or “Upside Down”) from the book “Pippi Longstocking”;

– A changing game show (in January 2020, it was dedicated to Barbra Lindgren’s books)

The museum plan below.

This is by and large a huge playground. But each corner is dedicated to characters from a different Swedish fairy tale. Here you can visit the mummy trolls, hug Mama Moo, sit in Mulle Meka’s airplane,

go skiing with Olle, and then relax in Petson’s kitchen.

Some characters, like Carlson and Moomin-trolls, are familiar to us, some have recently appeared in our country, such as stories about Petson and Findus, and some I learned after visiting the museum.

The whole fairy tale square is made like a real town, only child-sized.

There are clothes drying on the ropes.

Of course a lot of slides and climbing – all the things that children love so much.

READ
What you need to know before traveling to Peru, South America

All houses inside are equipped with real furniture, real household items – and you can touch it all with your hands, feet, and butt).

It occupies the entire space of the second floor, and everything here is dedicated to Pippi Longstocking. The villa itself is life-size, and next to it is a life-size horse.

The villa recreates the whole entourage and atmosphere, with furniture, crockery, and lots of small details. 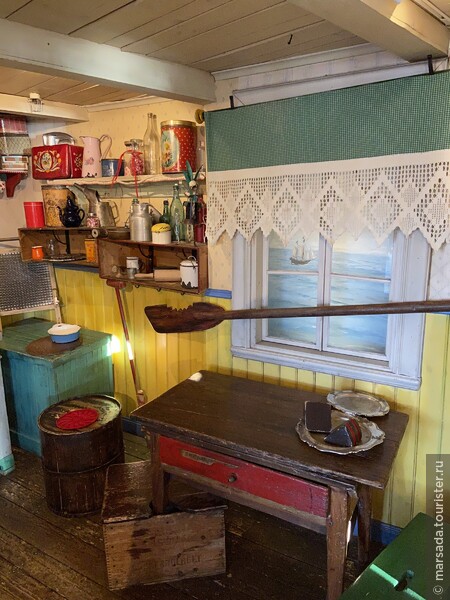 By the way, Pippi is much more popular in Sweden than Carlson. Also, it was Pippi that was Astrid Lindgren’s first book, and she was already 37 years old at the time. She composed it for her daughter when she fell ill with pneumonia. The girl liked the stories and her mother had to compose new ones endlessly. The result was a book. The Swedish society accepted the book negatively, especially the teachers, because Pippi was not at all like decent Swedish girls are taught to be. But on the other hand, it was Astrid Lindgren who changed a lot of the views on parenting. I really enjoyed this site – how naturalistic everything is.

Every day there are theatrical plays and other entertaining events on the square near the villa.

The idea of a small train that travels through several of Astrid Lindgren’s books emerged at the very beginning of the project. It took almost two years to create the Fairy Train.

The fabulous train departs on its maiden voyage at 10 a.m. and turns off 15 minutes before the Unibakken closes. The ticket specifies a certain time when you can get in line to board, a step of 15 minutes. The cost of the train journey is included in the ticket price. The entire journey takes place in a carriage like this

It’s a journey through episodes from six of Astrid Lindgren’s most famous books. Here we meet Madicken, Emil, Karlsson, the familiar Nils, the dragon Katla, the little Rani the robber’s daughter, and other beloved characters from the books on an exciting journey from a fabulous Swedish summer to the roaring Karmafall Falls. It’s beautiful, fascinating and a little sad.

READ
Yalutorovsk is the "city of Decembrists". Pluses and minuses

The text of the fabulous journey is translated into 15 languages. You can choose from English, Finnish, Russian, German, Dutch, Spanish, French, Italian, Arabic, Japanese, Estonian, Chinese, Danish, Norwegian and Polish. By the way, if you choose the Swedish text, you will hear the voice of Astrid Lindgren herself.

The train leaves from the station Vimmerby

(which is the birthplace of Astrid Lindgren) and the flight begins. We, of course, chose the Russian version, and although it was forbidden – I still filmed the whole way on video. Daddy watched the video several times a day for the first few days. For those who haven’t seen the video yet – here it is.

And for those who want a detailed look at how cool the scenery is made – a little photo.

If you believe that there are amazing fairy tale glades in the world, then go straight to Sweden – the famous place for children’s recreation in the Lindgren’s Fairy Tale Park. And if you manage to find yourself there on the eve of the birthday of the writer Astrid Lindgren, then consider that all the magic will happen in front of your eyes.

For the celebration of such a plan, the whole country is prepared thoroughly and according to all the rules, and for children there is a real grand spectacle. Home of the great storyteller is the town of Vimmerby, which is proudly located in the southern part of the country. In this town and is a museum of Madame Lindgren, and fairy tale park affects the imagination of the number of characters from her works. 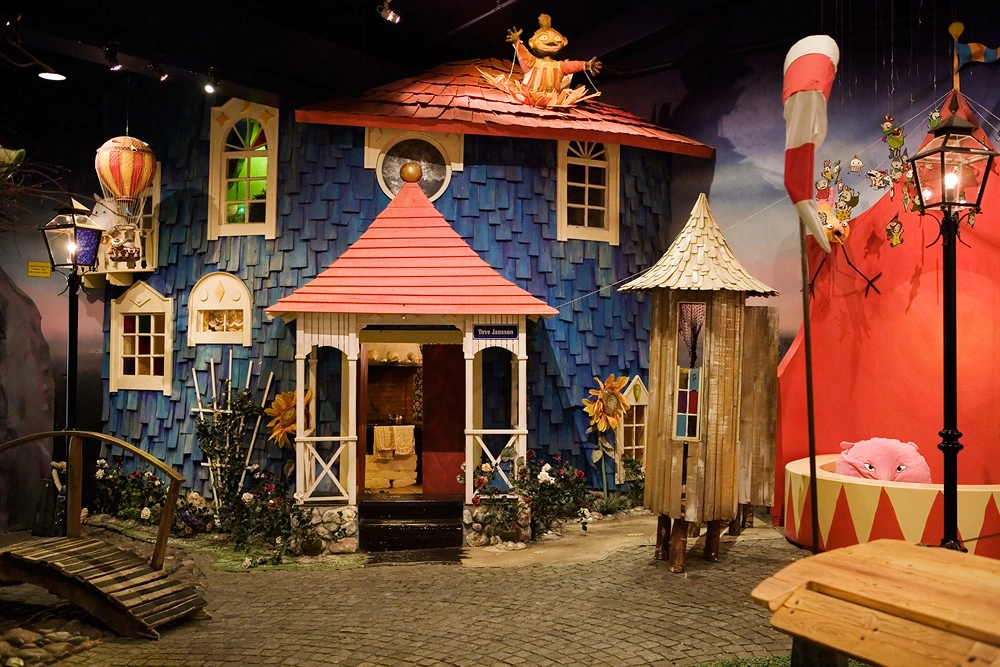 The birth of the park itself dates back to when three Swedish families decided to build a park for their young children based on the stories of the beloved writer. Then only one cabin was built in the park, but the family decided to make their dream come true in a huge park with many stories from fairy tales. After a while, permission was obtained from the fairy tale writer herself to use her main characters to place on the playground. 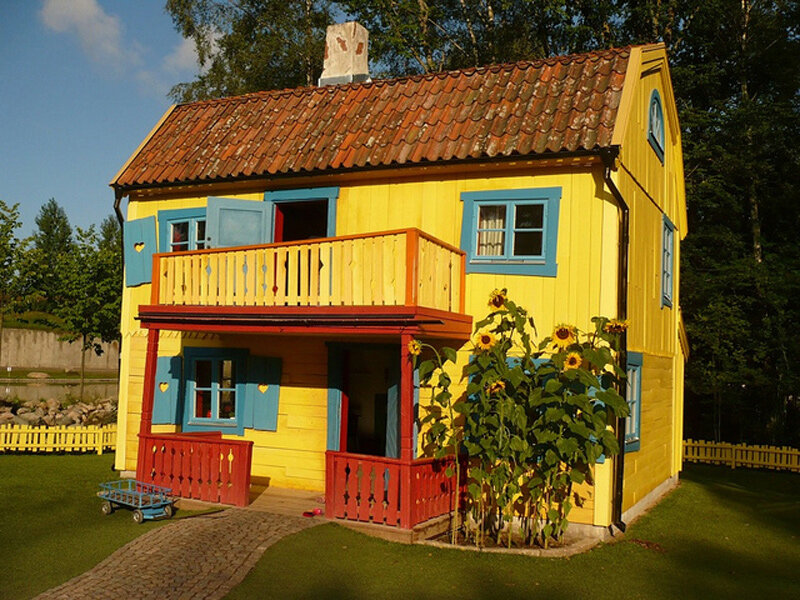 On the very creation of the museum was not a question, because the couples were limited to the creation of a play area for children. But time passed, and the park has grown to unprecedented size, coming into the possession of the authorities of the town. The year 1990 was marked by another joyous event. A real fairy tale town with beloved children’s characters from fairy tales was created on this site. 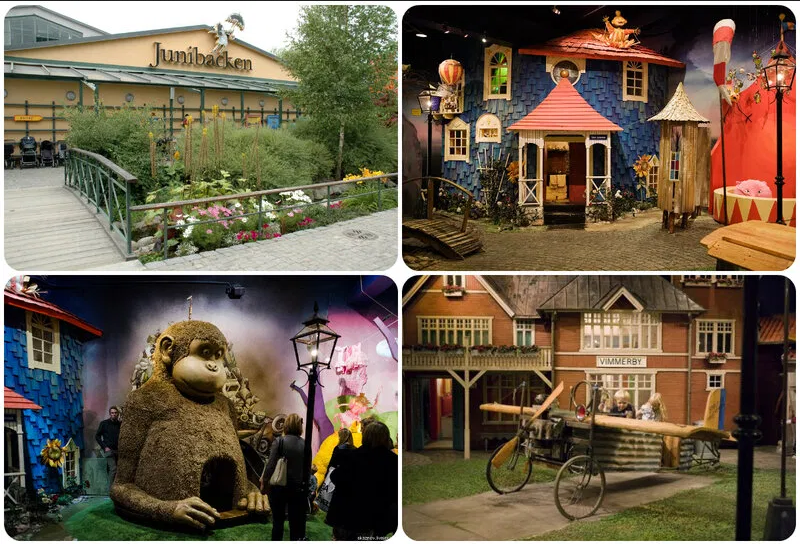 It turned out that such a creation, became a real paradise for kids. They could not only play for hours on the playgrounds, but also stay in miniature houses, run through the woods accompanied by kind thieves, wander in search of hiding places and buried treasures, get into trouble with a red-haired prankster Pappy Longstocking, descend from the roofs with charming Carlson and save the Kid from various troubles. 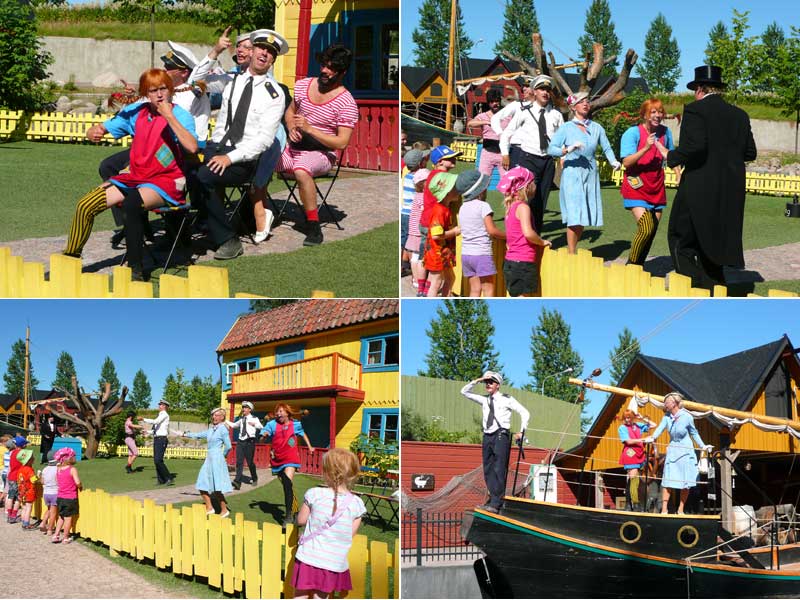 What is interesting, both children and adults really enjoy walking through the park. Despite the fact that the jolly goody-goody with a motor did not become a highlight of such popularity as in our country, still, children are drawn to him and play with him with pleasure, and the actors, who got the role of Carlson, represent the character with dignity. 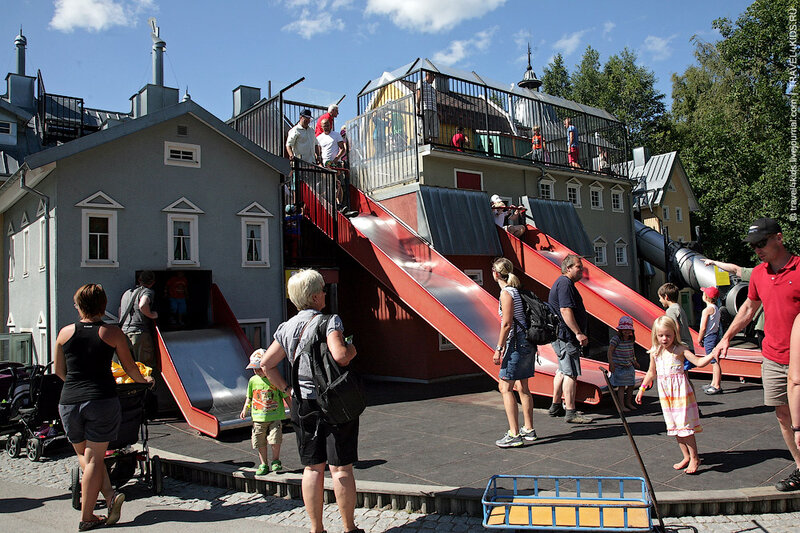 Not far from the main park is the small town of Linköping. In the heart of the small town is an open-air museum called “Old Sweden” . This place has collected all the houses that exist in the country. What is characteristic, there live real people, and to move into such a building, you must stand in line for years to get permission to move in. 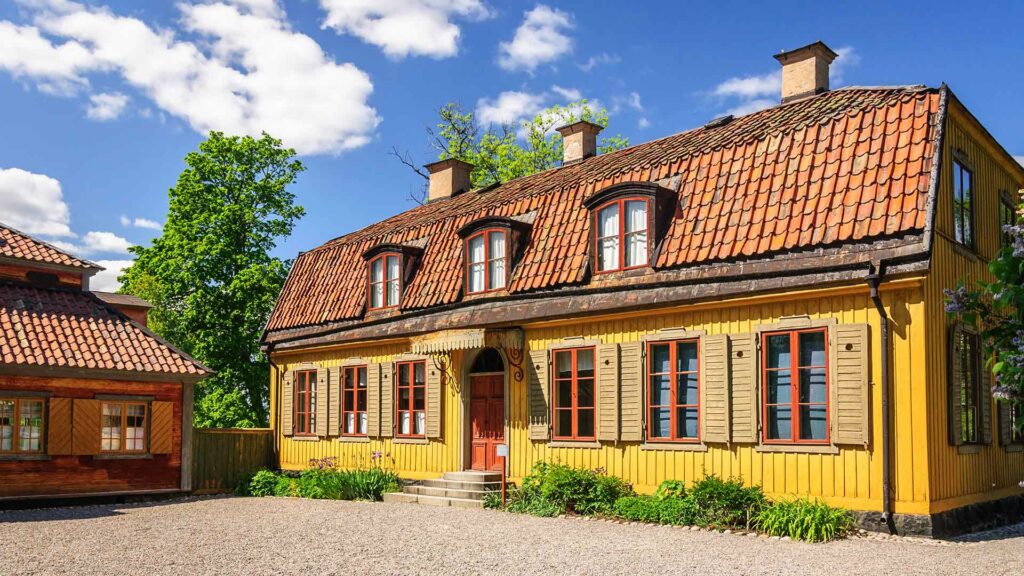 Although the one who became the lucky owner of such a house, must strictly adhere to the basic rules. There are no television antennas, no curtains on the windows, curtains and blinds. The main feature of the design of the house – the lights on the windowsills, sconces at the entrance to the house and flowers in vases on the front doors.

READ
Westminster Abbey in London - briefly about the main things

For tourists there is a great opportunity to go into the territory of any house you like and there to capture themselves on the background of the magnificent beauty. It is also possible to see the house from all sides without the tenants complaining too much. 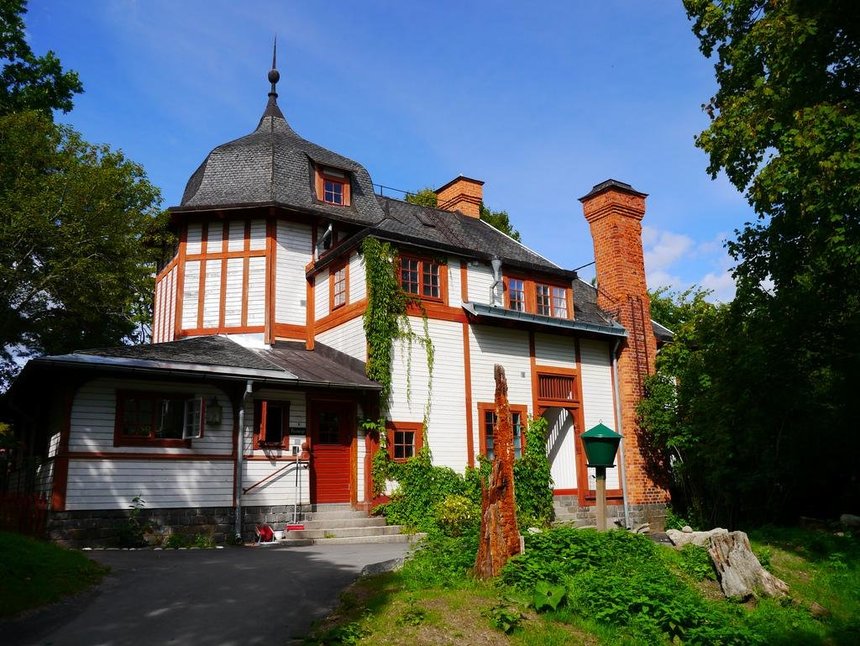 The town is an interesting spectacle, not only visually, but also because on its territory under the familiar tune of musicians leisurely stroll characters from different fairy tales. And if you visit this place, then do not forget to pay attention to the town of Söderköping with its ancient history and picturesque design. Its location is centered on the eastern part of the country. 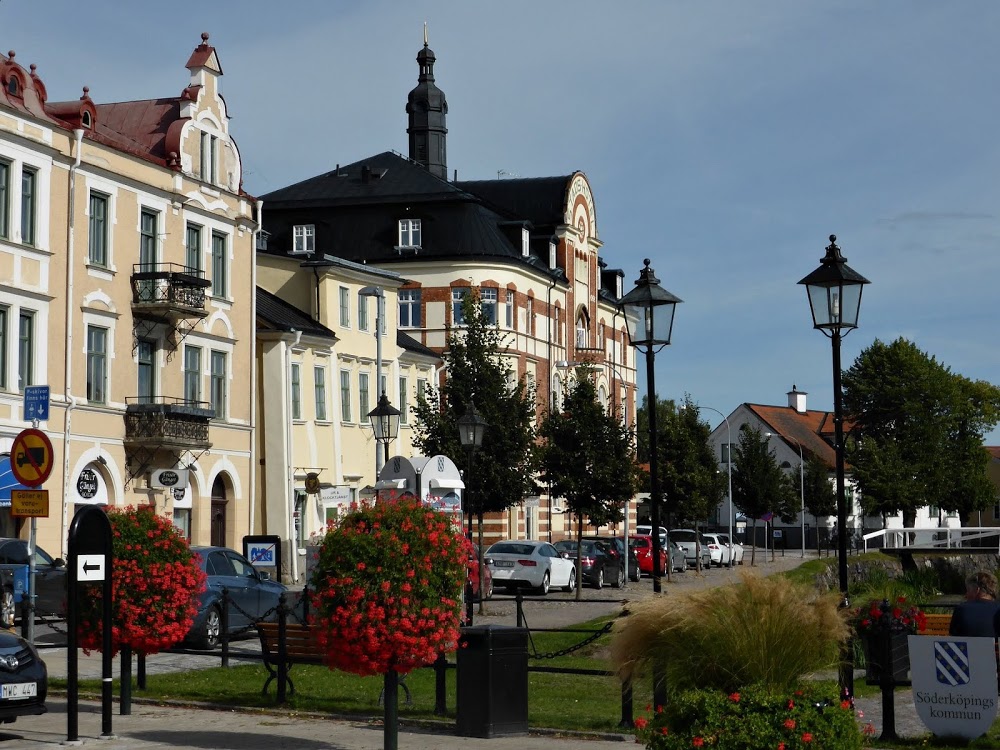 Treat yourself to a guided tour that takes you through all the trails of fairy tale characters and their amusing adventures. Although in addition to guided tours, everyone, adult and young child alike, will find something to do. Take a stroll down the Geta Canal, go sailing on a snow-white ship, and then indulge in some delicious ice cream right on the waterfront at a cozy open-air table. 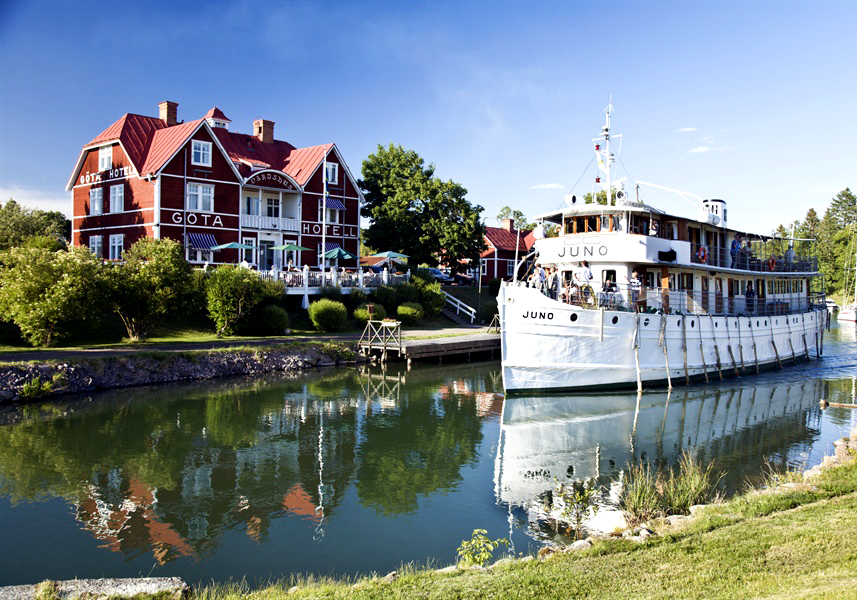 And having felt the charm of all this fabulous place, leaving it, do not get upset, because you are sure to find more time to come and visit Carlson and his Kid.