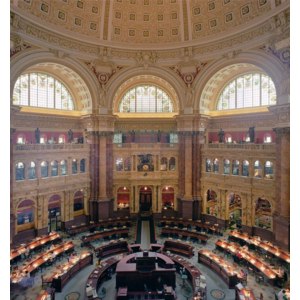 The X-Files: what else does the world’s largest library hold besides the Gutenberg Bible, the Declaration of Independence, and a Gershwin piano 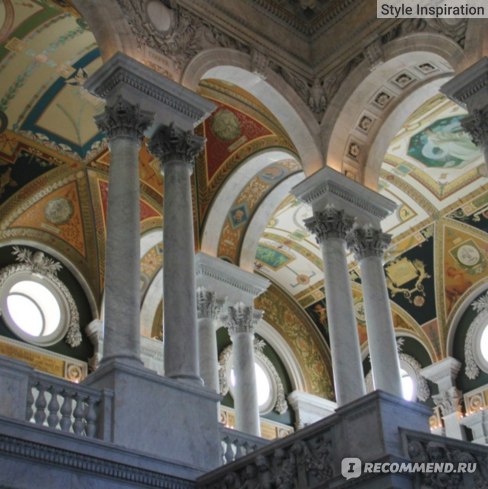 Manuscripts don’t burn, do they? But the National Library of Congress superstore has burned twice, and still, like the Phoenix, has risen from the ashes. 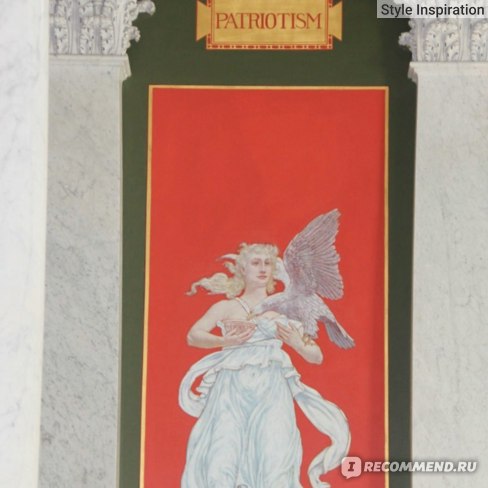 In the spring of 1800, the small city of Washington, DC became the capital of the United States instead of Philadelphia, and President John Adams issued an executive order establishing a library for senators, congressmen, and the president and vice president. That’s why the library was called the Library of Congress. Previously only the aforementioned individuals used it, but now anyone who is 16 years old or older can come and sign up. According to a historical note,

the new institution’s original collection was only 740 books and three geographic maps. 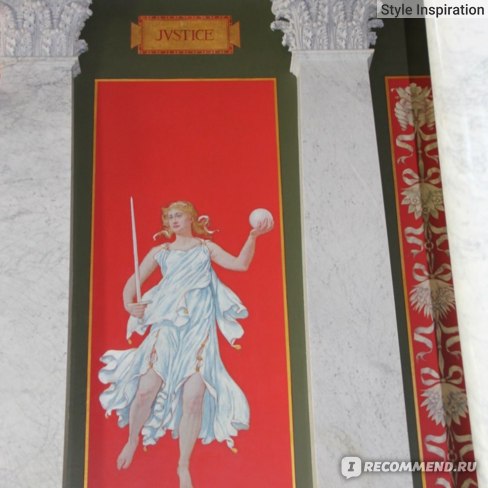 John Adams, having opened a library (and having allocated a considerable sum for this purpose), did not expand it further, it was not interesting. The next president, Thomas Jefferson, on the contrary, invested in the expansion of the library collection, constantly buying and ordering books and materials. But after he was succeeded by President Madison,

in August 1814 the library was almost completely burned during a fire in Washington by the British (the Anglo-American War was going on, the so-called “Second War for Independence”).

After the war and the fire, former president Jefferson donated his personal collection of almost 7,000 books to the library. At the time, it was the largest collection of books in America. That’s why the library is named after Jefferson. Very deservedly so! 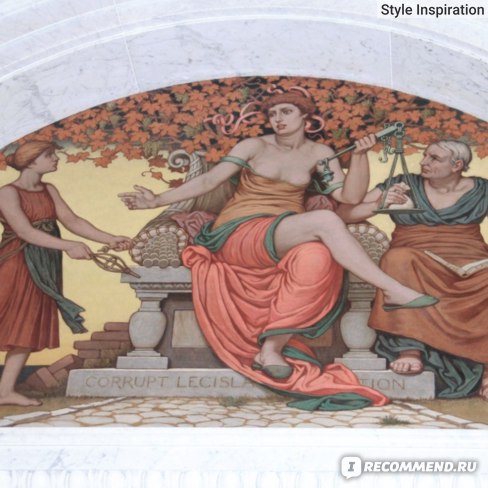 Nearly half a century later, however, there was a second fire that almost completely destroyed both the library building and most of the collection.

That is why the current, huge and majestic building of the U.S. Library of Congress was built, the collections were expanded and access to the reading rooms was opened to ordinary citizens.

READ
New Year is not in Thailand 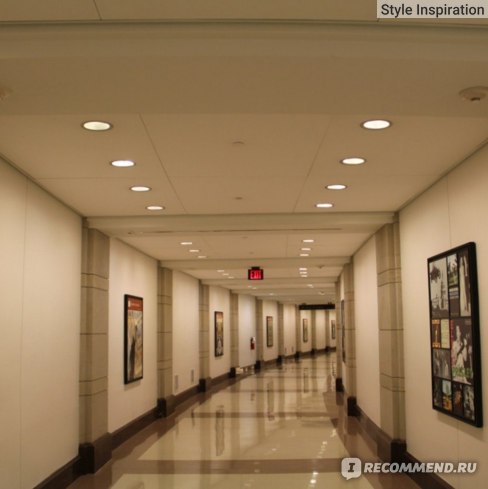 It is now three buildings, connected to each other and to the building of Congress by underground passages. And when you go down there, you immediately think of the X-Files series, because part of Mulder and Scully’s investigations took place here, and, accordingly, so did the filming. Along these subterranean galleries there are many more side branches leading to who knows where. Even the FBI agents on the show were not allowed access to all of them, and I, as an invited guest and a foreigner, was not.) Nevertheless, in addition to the secret collections intended only for the U.S. government (and I suspect that among them there are different levels of access), there is a huge volume of the official collection, open to all. Let me remind you, this library is the largest in the world, our Leninka is only the fifth.

According to various estimates, the total number of items stored ranges from 150 to 170 million, and every day this figure increases by several thousand.

Our Lenin Library also adds new materials every day, but after the collapse of the USSR this rate has decreased considerably.

All copies of the Library occupy about 1,000 km of shelves.

That is why the library itself has already grown into three buildings.

At the moment a little more than 10% of all the stored copies are digitized, one to two thousand documents are digitized every day.

I heard from the attendant that it is very worrying for the U.S. government because they are afraid of fire and are still carrying out the doomsday program, started after the Cuban Missile Crisis, and aimed at preserving the knowledge of mankind. In addition to the famous doomsday vault, which holds the seeds of all the earth’s cultivated plants (and according to some sources, animal embryos as well), a similar vault is being created for all the achievements of human civilization. True or legendary, there is no way to check it, but theoretically it does not lack logic. 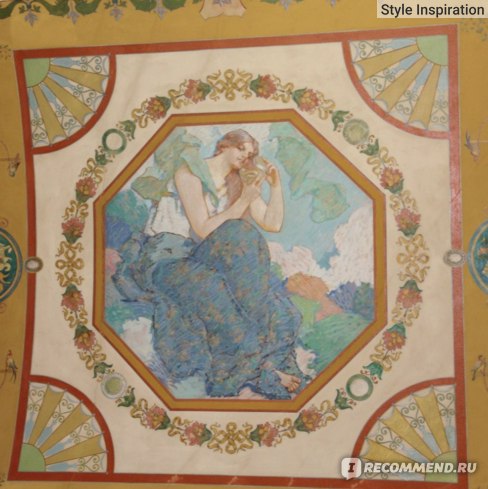 Despite the fact that the staff is huge, they do not have time to digitize materials for one simple reason: the rate of growth of materials is higher than the rate of digitization.

There are copies written in 420 languages of the world, including about 300,000 in Russian.

And many of the library staff are Russian. So are the readers. 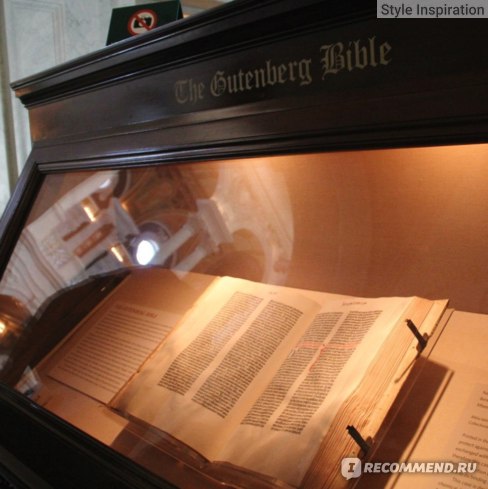 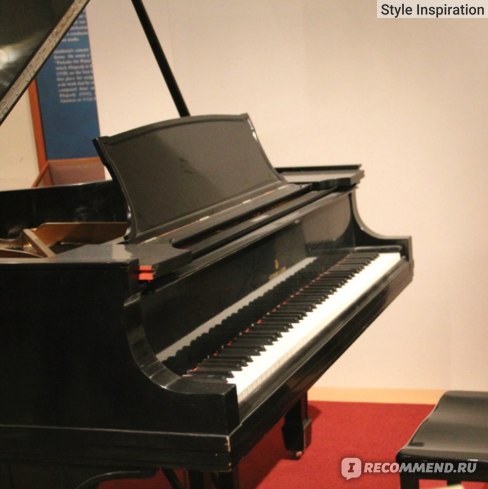 The first printed Gutenberg Bible, Gershwin’s personal piano and his sketches are kept here, but the most valuable copy, according to the US government, is the first printed edition of the 1776 US Declaration of Independence. 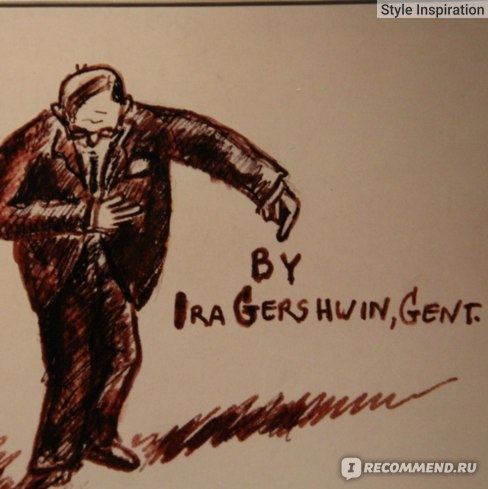 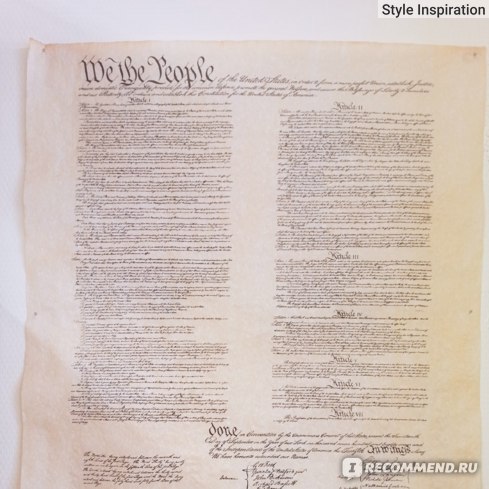 This is despite the fact that Americans are very pious people in the masses)))) like this, not the Bible is more valuable, but their independence! 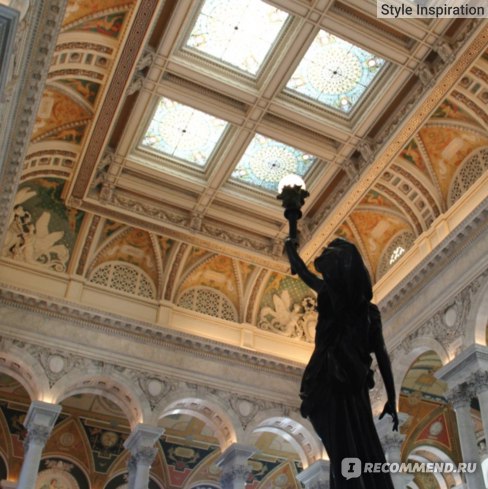 The library resembles the Leninka library in pathos, but, though it is a shame to admit it, is much more beautifully decorated and has a richer decorations.

It has the same red marble and mahogany, polished to a shine by thousands of hands, and the same high ceilings, but still the Library of Congress is more a palace or temple, not a strict house of science, like ours. 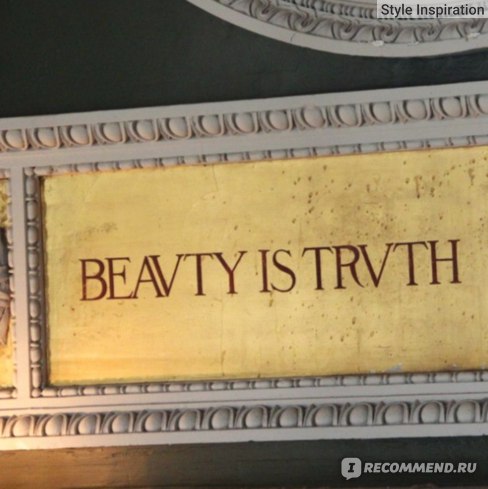 There are also simple kind of instructive paintings, like a mural about corruption in the judiciary, there are allegorical paintings and all kinds of interesting expressions like “Beauty is truth, truth is beauty” or just the word “family” laid out in the middle of the mosaic. 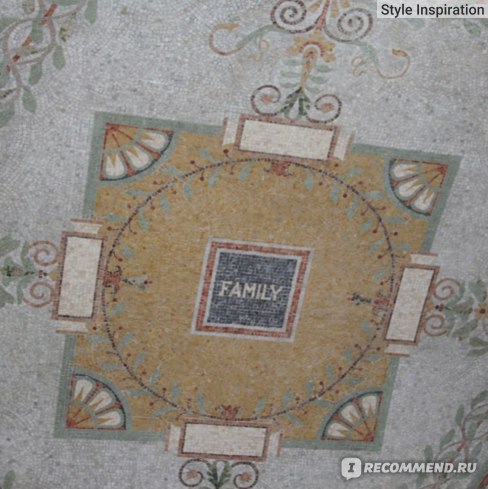 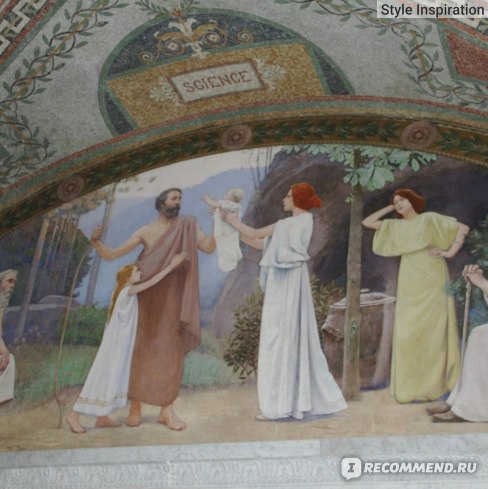 The allegorical depiction of science, for example, I never understood. Science holds out the born knowledge. To whom? What does the figure of a man signify and why is he being stopped by a girl? 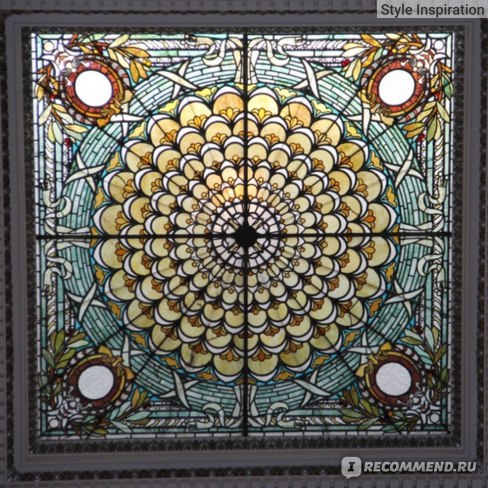 Symbolism is very evident in the stained-glass windows and small patterns, there are sheaves, and the rising sun, and the compass – Masonic references are very recognizable, which is understandable if we remember the year of construction and finishing of the library, and compare it to the year of construction of the same St. Isaac’s Cathedral in St. Petersburg, the decor of which also abounds with Masonic details. Both the U.S. government and the Russian emperors knew and respected this subject very well.

READ
Slovenia is an interesting country in central Europe 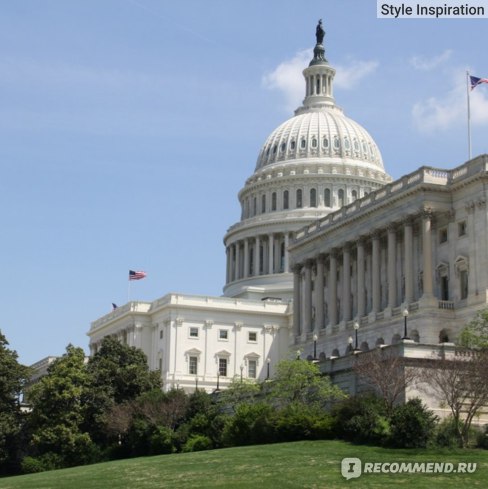 You can come just as a visitor and sign up, or you can take a ticket for a tour (I recommend combining it with a visit to the Congress itself and the Capitol, there are options when you can even go to a congressional meeting). True, you will be confused to pass levels of security checks, but it is worth it). The price of about 20-30 dollars, depending on the content of the tour, there are also taken to the Lincoln Monument and the famous stele in Washington, which is cleverly called the Washington Monument. Honestly, unlike the Library and the Capitol, there is not much to see there, well, the trunk is standing, and the majestic Lincoln, sculpted in the proportions of gigantism ten times larger than human height in the best traditions of the Soviet statues of Lenin, on the contrary, is sitting. But as cultured people, of course, we went there anyway). 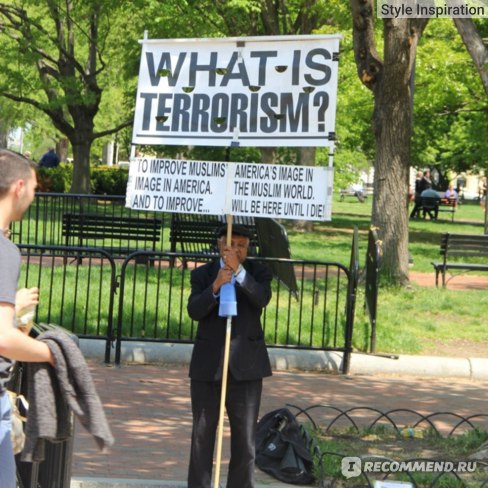 It was much more interesting to see the people near the Congress – for example the lady who has been demonstrating in a solitary picket for twenty years. They say she has her own fan club and sponsors. The posters say she won’t leave until she’s dead. What does she want? Terrorism and creating a positive image of Muslim countries – but it is not clear whether terrorism is exactly creating an image or not. And what should be done about it? Nothing in general is clear from the posters, but we did not ask for details. 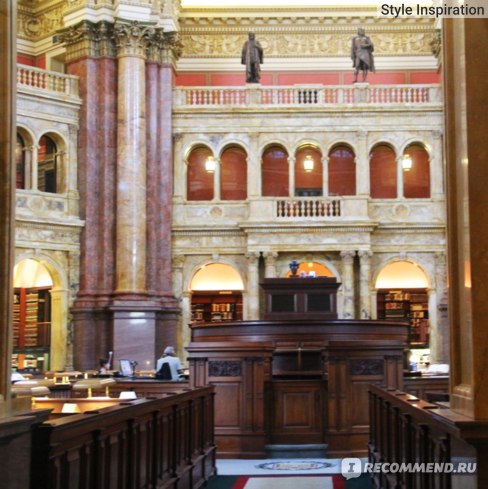 I think this is the best illustration of the principles of democracy – if someone had tried to stand like this, at least for a day.

It is interesting and cool that you can touch the holy of holies of the American government in particular and American culture in general. And that it is so encouraged by the U.S. Congress itself, such a popularization of their vision of how the world should be organized.