Laponia is a 9,400 km2 national park and UNESCO World Heritage Site in the county of Norrbotten, in the province of Lapland in northern Sweden.

Laponia is a Latinized form of Lapland. The area is divided between the municipalities of Jellivare, Jokkmokk and Arjeplog, near the border with Norway. Much of the area is wilderness, though from time immemorial it has been inhabited by the Saami, who continue to pursue traditional livelihoods in the area, such as reindeer herding and fishing.

The heritage site consists of four national parks Sarek, Stora-Shefallet, Muddus and Padjelanta, the Sjaunja and Stabba nature reserves and other areas in Sulitelm, Tuoltadalen and Rapadalen.

History The area became a UNESCO World Heritage Site in 1996. Most of the area had some kind of protected status much earlier.

Landscape The landscape of such a vast area includes many types of character, such as the old-growth Muddus forests, many kinds of wetlands, including Sweden’s largest, rounded low hills and treeless highlands, valleys (“vagge”), high mountains (the highest, Sarektjåkkå, is 2,089 m, 6,562 ft) and glaciers.

Climate The area is above the Arctic Circle, part of it at a fairly high altitude. The days are often cool and in summer. It rains a lot in summer and snows a lot in winter. Above the tree line, the winds can be brutal.

There are several roads in the area, as well as buses to some nearby villages such as Kvikjokk (from Jokkmokk and Murjek) and Stora-Shefallet and Ritsem (from Jellivare). The E45 crosses most roads in the area and leads through Stubba and Muddus.

Boat traffic passes between some of the trails.

There are several helicopter operators, allowing direct access to some roadless destinations.

There are several hiking trails in the surrounding area. The most famous (you can mostly only use the last stage; most of the trails described in the Do section below):

Gränsleden / Rádjebálges leads from the Tisfjord on the Norwegian coast to Agkajavrre and Ritsem in Sweden, across the border at Nordkalottleden. This is an old trail that was used for trade, and was used by refugees from occupied Norway during the world war. Take a boat from Kjepsvik before starting the trail in Surfjorden (+47 75-77-43-29), call ahead to ensure coordination with other vehicles. Royal Road from Hemavan Royal Road from Abisku Nordkalottleden from Sullielm in Norway Nordkalottleden from Kautokeino or Kilpisjärvi Rallarstigen from Jellivare You are free to enter Laponia where you want, but there is a tourist center in Stora-Shefallet (near the waterfall) and other official “entrances” in Jokkmokk, Jellivare, Porus and Kvikjokk.

Fees and permits There are no entrance or tourist fees, but you must pay to use the facilities of the huts. Payment in advance is appreciated (there is a receipt), but in manned huts you can pay the host, for unmanned huts payment is later possible. You can also pay for transportation, fishing, or program services.

Fishing conditions vary from area to area. Check the waters in which you intend to fish.

Do not disturb reindeer (especially during spring calving or when they move between winter and summer pastures) or other wildlife such as birds. Leashed dogs are allowed in national parks from January 1 through April 30, and throughout the year on some trails and in some areas. Pets are allowed in all STF cabins.

READ
What to do in Los Angeles without money?

Mostly on foot, with skiing in the winter (or snowmobiling on some trails). Some destinations can be reached by helicopter or boat.

The trails usually have bridges as needed. Some river crossings have rowboats. Leave a boat on each side. In Sarek you will often have to wade across, although there are some bridges.

In the north of Sweden there is a land named Laponia, popularly nicknamed Swedish Lapland. Lives in those places the ancient people of Lapps, leading to this day a traditional nomadic way of life and engaged in reindeer herding. The unique nature of the area combined with the monuments of Saami culture has ensured the protection of these territories by UNESCO as a World Heritage Site since 1996.

The Highlands of Laponia occupy almost nine and a half thousand square kilometers. Located near the Arctic Circle, this wild land attracts many tourists, not hindered by the harsh climate, but the long road, or the specificity of the local traditions. Just the latter to a greater extent and make travelers to visit these places. 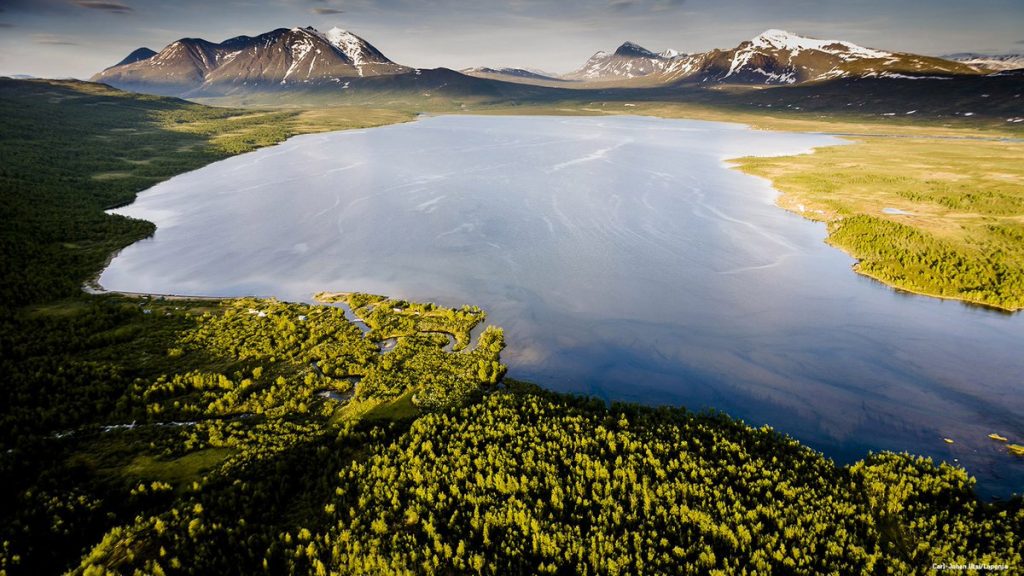 It’s a polar day in the summer, so most activities are around the clock. Skiing and fishing, downhill skiing and biking or boating await the outdoor enthusiasts. The opportunity to dine on the ice, live in a hotel in a tree or ice apartments will attract thrill-seekers.

And from October to May you can see the Northern Lights. For this, even built a special station, which can be accessed by elevator.

And of course the village of indigenous Sami people are waiting for visitors.

READ
When to go to Thailand. Best time to rest

The first documentary records of the Sámi in Sweden date back to the end of the XIV century and tell us how Margarita, a Sámi woman, engaged in missionary work and began to preach Christianity to her fellow countrymen. 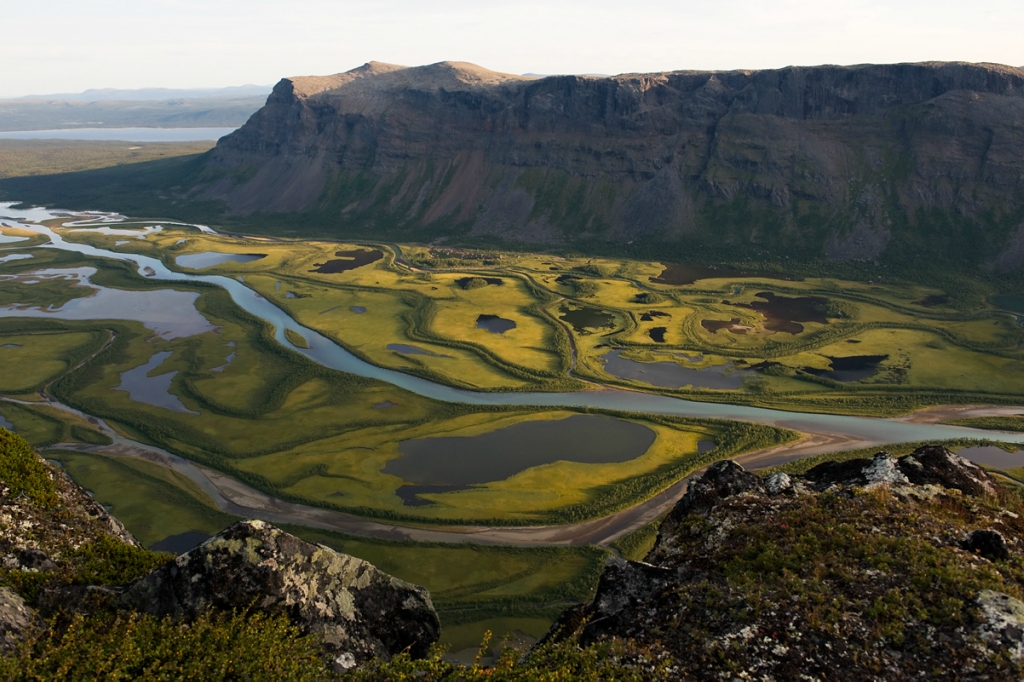 For centuries the nomadic people, due to their way of life, had led a rather isolated existence, actually not experiencing the influence of the state. Social pressure began to exert its tangible effect only at the end of the XVII century, when the number of immigrants, mainly from Finland, increased in northern Sweden.

The consequence of this phenomenon was a decrease in the standard of living of the Sámi tribes, as well as the spread of drunkenness, which affected the Sámi much more than the rest of the population, because previously the nomadic people did not use alcohol. During the 19th and 20th centuries, their mother tongue began to be gradually replaced by Swedish or Finnish, especially education, which was supported by the state.

This state policy caused an almost irreparable damage to the traditional Sámi way of life. In the first half of the twentieth century, the Lapps were forcibly resettled and their children were moved to separate schools.

Since the 1970s, such discrimination on the state level ceased, but the situation has not changed much in everyday life. Attitudes toward the nomadic people remained prejudiced, largely due to a lack of information about them. Ordinary Swedes knew little about the Sámi, except that they were nomadic reindeer herders.

In 2011 the Supreme Court of Sweden ruled that the Sámi people have a traditional right to a certain territory.

Today, the number of Swedish Sámi ranges from seventeen to twenty thousand people. Around the world they number about seventy thousand.

The Sámi people have very characteristic external features. They are short in stature, with fair skin and wide set eyes, with a small chin and prominent forehead. Scientists refer them to a special group of lapponoi. Geneticists have discovered that the Sámi share common genes with the Basques, Buryats and Yakuts.

The Sámi people traditionally had three cults – a fishing cult, a cult of ancestors, a cult of idols and seids. The first one implied the worship of craft spirits, the second – the bringing of presents to ancestors, and the third – rites and sacrifices in seids (a sacred place). Modern Sámi adhere to Orthodoxy and Lutheranism.

The traditions of the Lapps, in some ways are unusual, and in some ways resemble a house style. So, the family life was organized according to the principle “men are bread winners and women are keepers of the hearth”. At the same time, the couple was engaged in handicrafts and milling of kitchen utensils. The age of marriage was usually 20-25 years. Girls here were married off only with their consent. It was common in the families to have many children. A deer was given for the birth of a child. The bride price as well as the girl’s dowry was counted in reindeer. 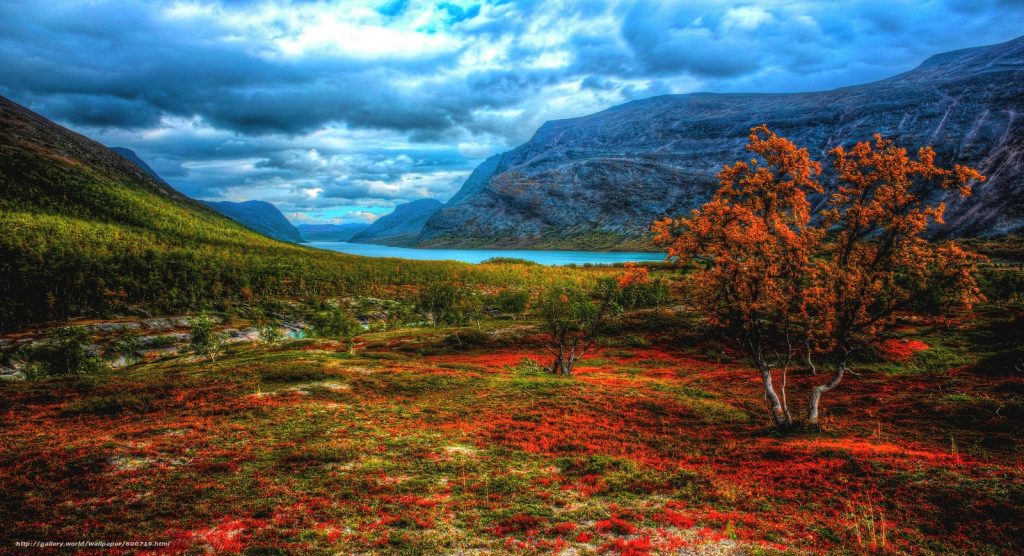 Traditional nomadic clothing and footwear are made from simple and accessible materials. Shirts and pants are straight cut and made of canvas or cloth, winter clothes are made of suede, fur and reindeer skins. All the costumes of the Lapps were embroidered with beads and colored shreds.

The dwellings of the Lapps for nomadic life resembled a tent. The poles were covered with reindeer skins, modern Sámi use tarpaulin for that purpose. Settling down in one place, the Sámi built a rectangular or square house made of wood, with the posts and floor covered with skins . A hearth is laid out in the middle of the room and a hole is made in the ceiling above it for the smoke to escape. It is noteworthy that the door in such a house is always set on the south side. 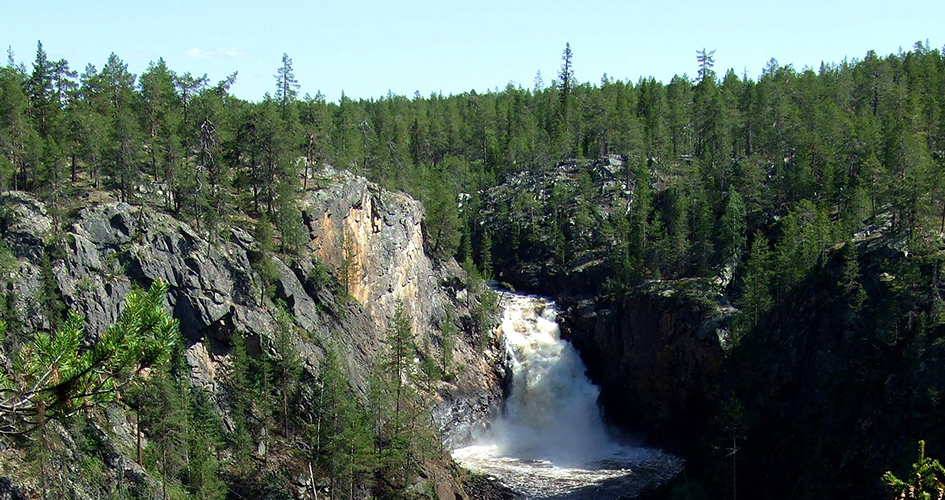 The ellipse-shaped area of the park is half marshland. Rare species of orchids grow here, you can see a seven-hundred-year-old pine tree and a waterfall forty-two meters high. 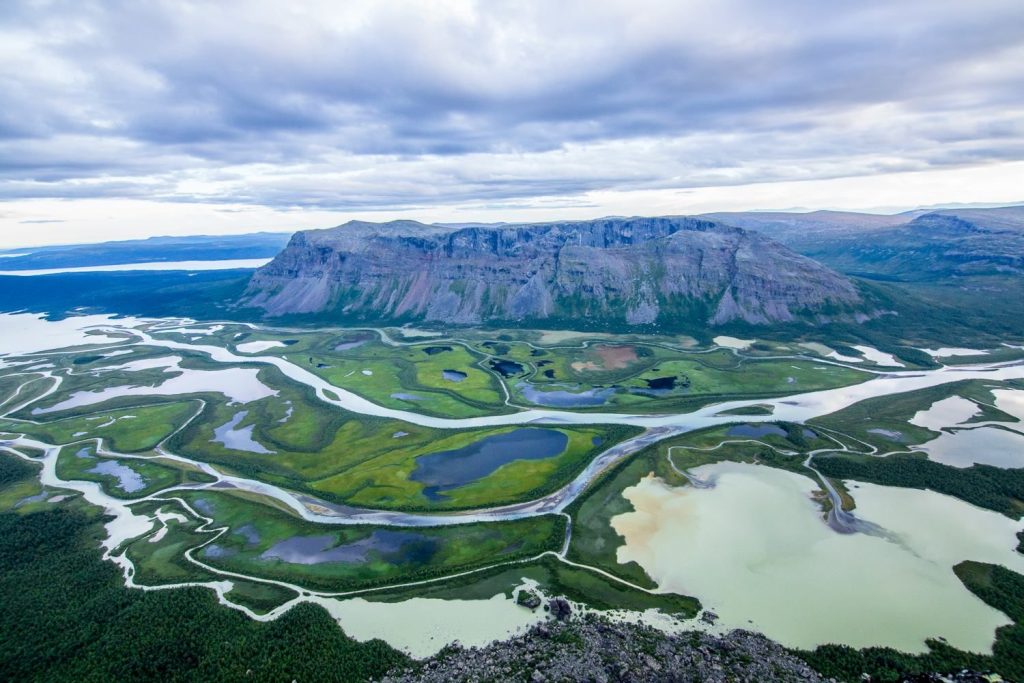 The park is round in plan and has no paved trails, so novice hikers and climbers should gain experience first. Eight peaks over two thousand meters in height with difficult climbs, as well as several glaciers will delight fans of extreme recreation. 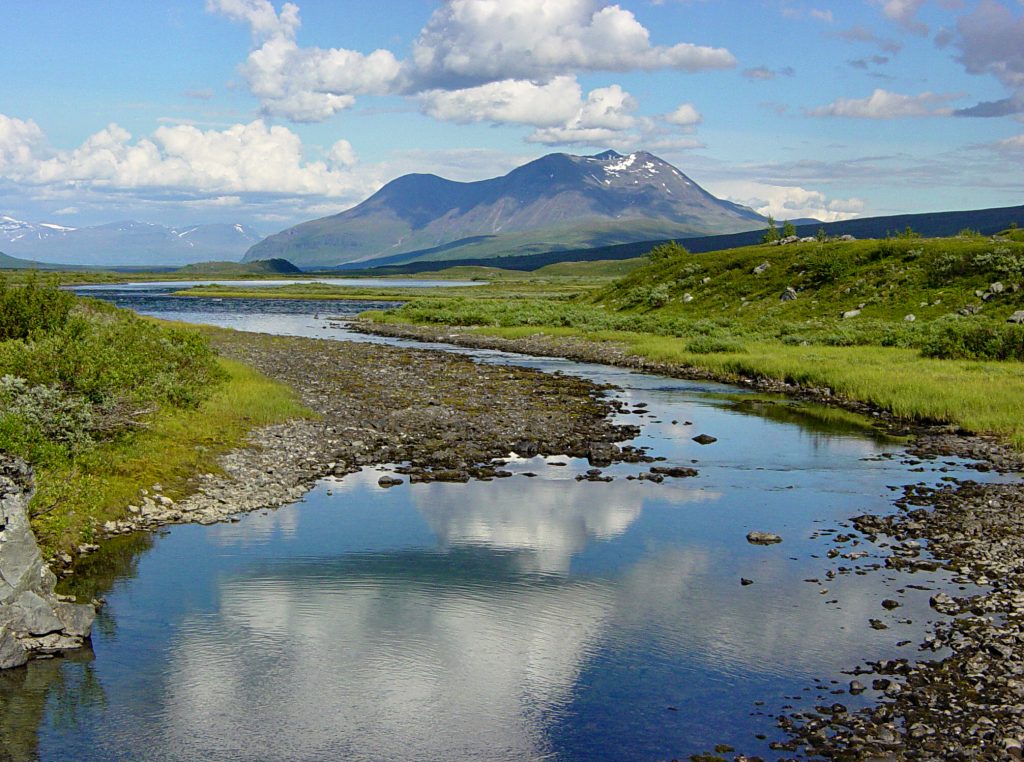 Four hundred species of flora and fauna, two beautiful Swedish lakes and an open landscape await the visitors of this park complex, which was established in 1962 and has an area of almost two thousand square kilometers. 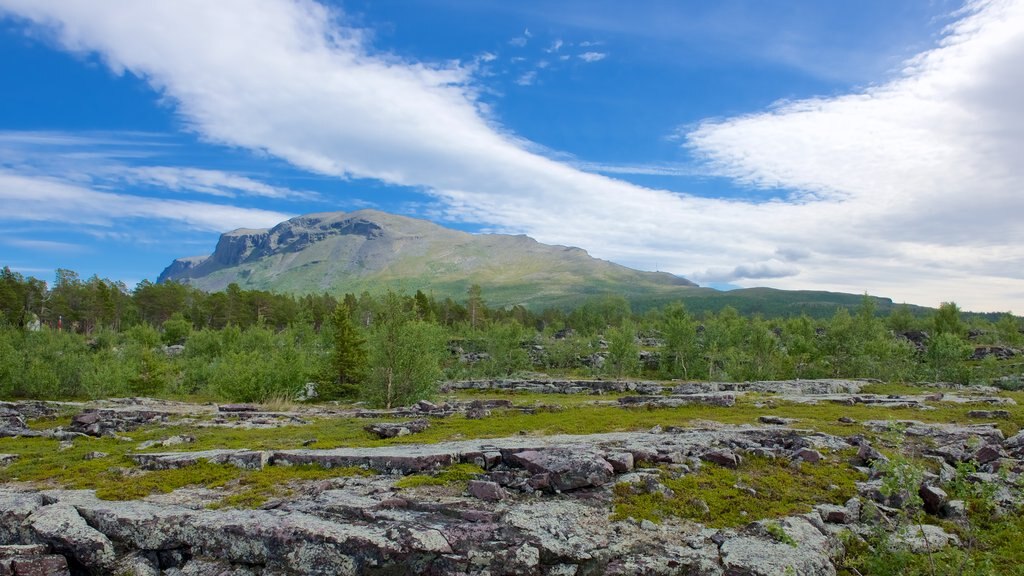 The park bears the traces of the Ice Age, only twenty kilometers from the Arctic Circle, in the midst of mountain ranges formed more than four hundred million years ago by the collision of the continents. Here is the famous waterfall after which the park was named. Only dwarf birches and cloudberries can grow on the poor local soils. Elk and deer are neighbors on this land with foxes and ermines.

The mother of actress Renee Zellweger was a Sami.

The International Day of this nomadic people is celebrated on February 6.

The Lapps have their own Santa Claus – a spirit named Mun Kallsy, who rescues hunters lost in the woods.