Nestled among the mountains of West Honshu, Kyoto was Japan’s ancient capital and residence of the Emperor for a millennium (794 to 1868). During this time Kyoto accumulated a unique collection of palaces, temples and shrines built for emperors, shoguns and monks, and today is considered one of the most beautiful cities in the country, being the keeper of many ancient monuments of architecture and art.

The first thing you see when you enter Kyoto is an ultra-modern city train station of glass and steel. Kyoto strives to preserve ancient traditions, but collision with modernity is inevitable. Gradually discovering the beauty of Kyoto in the temples and parks that surround the city center, and walking through its dynamic youth neighborhoods, narrow streets, along the riverside, you realize that modernity only emphasizes the beautiful corners of ancient culture and creates an amazing harmony of times, making this city special. 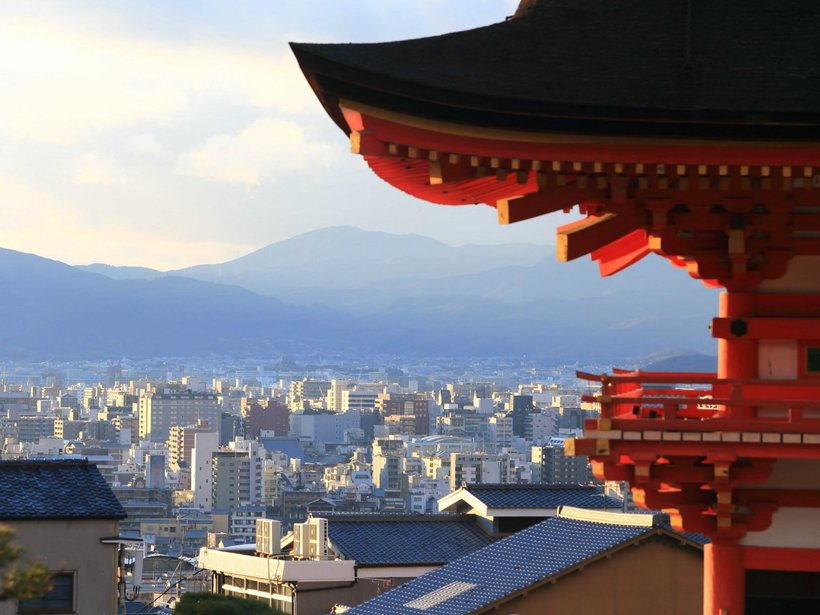 A short video about Kyoto

You can get to Japan from Russia by plane, and only from Vladivostok by ferry.

Kyoto doesn’t have its own airport, it is in Osaka city. From Moscow to Osaka a ticket with connections costs from 20 000 rubles, travel time from 11 hours. Direct flights from Moscow to Tokyo start at 40 000 rubles and take 9.30 hours. You can see how much a ticket will cost for your flight on your dates, for example here.

From Osaka to Kyoto there is a train every half hour (540 yen) and a bus every 20 minutes. 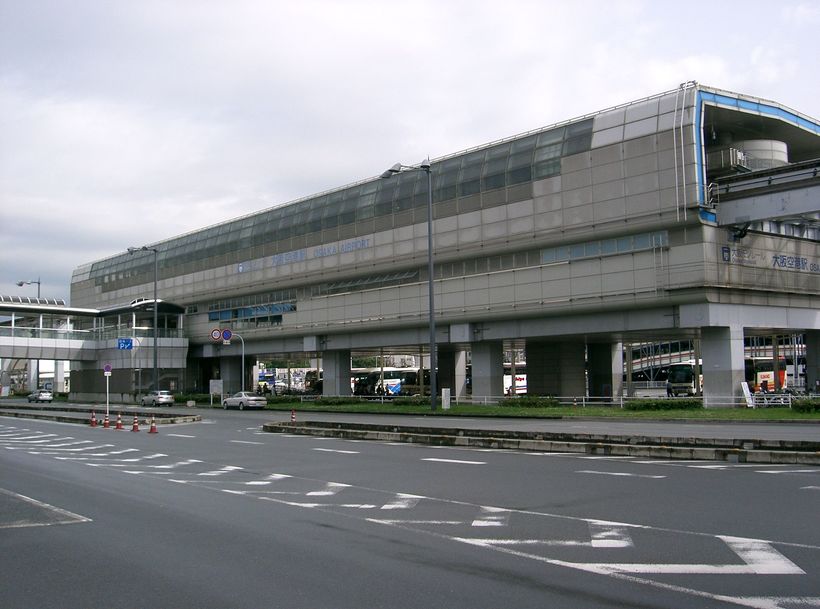 Unfortunately it is not possible to get directly from Moscow to Kyoto by train. But within the country the train service is very well developed. So here’s a little about how to get from the airports to Kyoto by train.

If you are flying to Kyoto from other parts of Japan, you will arrive at Itami Airport. Itami airport is located near Osaka city and is the largest in the Kansai region. The easiest way to Kyoto from the airport is to take bus number 15. The trip takes about an hour and costs 1,280 yen. Buses run three times an hour. Alternatively, you can take the monorail or regular train. This option requires at least two transfers, but costs only 650 yen and takes only about an hour.

If you flew to Tokyo and are coming from Tokyo Narita Airport, you can take the Narita Express to Shinawa Station and then take the Tokaido Shinkansen (high-speed train) to Kyoto in 2.5 hours. 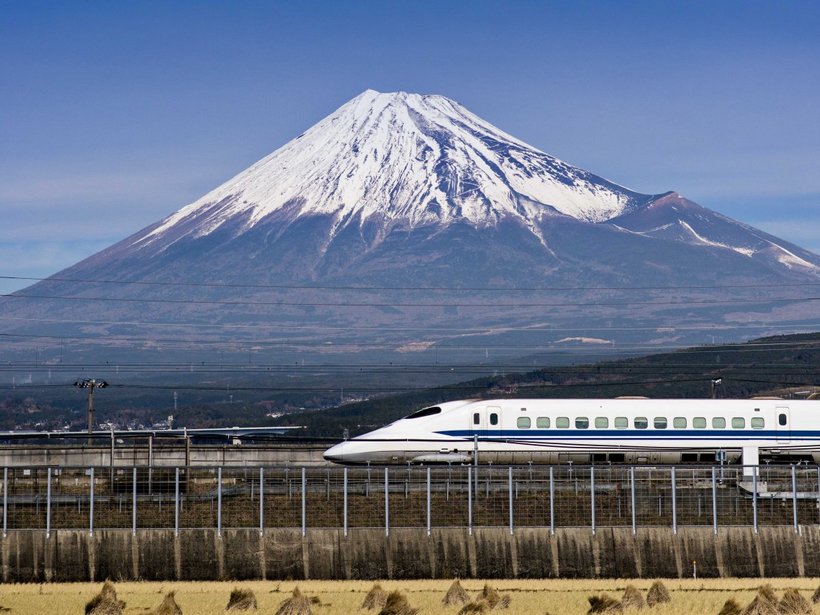 You can take advantage of the discounted Puratto Kodama Ticket, on the Kodama route, provided you book at least one day in advance. The ticket from Tokyo to Kyoto costs 9,800 yen and includes drinks, which is good because it takes 3 hours and 45 minutes to get there. This train runs once an hour and this ticket is not valid for some early flights.

There is also the “Seishun 18 Ticket” which allows you to travel from Tokyo to Kyoto in about 8.5 hours using any local trains. If you are traveling in a group, you can save money, groups of 3 are 3,800 yen and groups of 5 are 2,300 yen per person. The normal cost is 8000 yen.

Hikari trains run less frequently and make more stops, with a travel time of 2 hrs 45 min, but only they and Kodama trains can use Japan Rail Pass at no extra charge.

You can fly into Kansai International Airport and take a train to Kyoto. The train station is located across from the arrival hall. There you can take the JR West Haruka Kansai Airport Limited Express Train between Kyoto Station and Kansai Airport. The train is operated by Japanese Rail (JR) West.

The best and fastest way is to buy a day ticket “JR West” runs once or twice an hour, travels 77 minutes. The ticket is for foreign tourists only and costs 2,000 yen. A regular Haruka train ticket from the airport to Kyoto is 980 yen more expensive.

Or JR offers ICOCA and HARUKA tickets, trips within the “Free Zone,” and the ICOCA transportation card with a 2,000 yen top-up (including a 500 yen deposit). The cards can be used on Japanese Railways, private lines, buses, and stores in the Kansai region. A one-way ticket costs 3,000 yen and a round-trip ticket costs 4,000 yen.

Both of these tickets can be purchased online or at the Kansai Airport station.

For travel within the Kansai region, the cheapest and fastest option is JR’s Shinkaisoku express trains, which take passengers to Osaka, Kobe, and Himeji at local train prices. Private trains on the Hankyu and Keihan lines to Osaka or Kobe, or the Kintetsu line to Nara, cost a little less. The “Kansai Thru Pass” includes trips on private company trains to Kyoto, which can be cheaper than a pass on government lines if you travel through the region for several days.

A trip from Tokyo to Kyoto can be split into two parts by staying overnight in a room. With the Japan Rail Pass and the willingness to pay for a hotel room, the cost of the trip will come out a little more expensive. All you need to do is pay for the hotel, and the train fare is already paid for with the purchase of the rail pass.

This method has two advantages – space and money. In a small town you can find a good and inexpensive hotel near the train station. To facilitate the trip, you can use the luggage delivery services.

For example, you can take a late Tokaido-shinkansen flight and stay overnight at a hotel in Shizuoka, Hamamatsu, Toyohashi, or Nagoya. In the morning, take the first express train of your destination and continue your journey. Or you can take a Hikari or Kodama train in the evening and go to Hamamatsu (75-90 min by Hikari train, 2 hrs by Kodama). There you can stay overnight at Hamamatsu’s Toyoko Inn for 4,000 yen for a pre-booked room for one. Take the 6:30 am Kodama express train to Kyoto by 8 am.

Kyoto is a large city, so there are regular day and night trips between Kyoto and other Japanese cities, which are usually cheaper than Shinkasen trains. Traffic between Tokyo and the Kansai region is very heavy, and competition between bus companies has resulted in lower travel prices and greater comfort. Buses from Tokyo take the Tomei Expressway or Chuo Expressway to Nagoya, then the Meishin Expressway to Kyoto. The trip takes about 7-9 hours depending on the route and the number of stops. The easiest way to get from Itami Airport to Kyoto is to take bus number 15. The trip takes about an hour and costs 1,280 yen. Buses run three times an hour.

READ
Extreme tourism in Africa. Which countries to visit and what to expect from them

Low-cost bus operator “Willer Express” offers day and night trips, with comfort levels ranging from standard to deluxe. The trip can be booked online. The “Willer’s Japan Bus Pass” is valid on all routes with a few exceptions. Buses leave Tokyo from the company’s own terminal located west of Shinjuku Station in the Sumitomo Building. In Kyoto, “Willer Express” buses use the Hachijo exit at the southern end of Kyoto Station; on some routes, buses stop in front of the Kiyomizu-Gojo post office.

Prices range from 3,800 yen for a standard seat to 9,800 yen for a deluxe seat. Day trips start at 4,900 yen. Bus tickets are usually more expensive on weekends and holidays.

“JR Bus is the largest bus operator on the Tokyo-Kyoto route. Reservations are only in Japanese on the website, but can be picked up at the Midori-no-Madoguchi ticketing window at the train station.

JR buses depart from Tokyo Station (Yaesu exit) and from the JR Highway Bus terminal next to Yoyogi Station on the Yamanote Station line. In Kyoto, buses are at the Karasuma exit at the north end of Kyoto Station.

The comfort level varies from 2×2 seat youth, standard and deluxe. JR Bus prices range from 3700 yen for a youth bus and up to 7600 yen for a premium bus, day trips from 5000 yen. More expensive on weekends.

Some of the buses from/to Osaka city stop at the Kyoto Fukakusa Bus Stop on the Meishin Expressway. From Fukakusa Bus Stop it’s only a 10-minute walk to Fujinomori Station and a 15-minute walk to Takeda Station on the Kinzetsu Railroad and to the Kyoto subway. There is also a local bus to Kyoto from the Youth Science Center stop 1-2 times an hour.

JR Passes can be used for overnight trips on a standard bus on the Tokyo-Kyoto route called “Dream” service. On direct Tokyo-Kyoto daytime buses, the pass is not valid

You can easily get to Kyoto by car via Meishin Expressway between Nagoya and Osaka, the only inconvenience is that you have to wait for a free parking space for a while on the outskirts of the city.

And around the city is easier to use public transport, as most attractions are in places built long before the existence of cars.

One of the significant places is considered Kyoto Japan . Which fascinates with its extraordinary culture, traditions, which are honored by local residents. Separately need to say and about the unique architecture, which has a thousand years of the past and carefully preserved.

On the island of Honshu is the extraordinary city of Kyoto. It was founded as early as 794 at the site of the village of Uda, as the seat of Emperor Kammu. At the time of its founding, the area of the modern city was called Heifn-kyo. The name means “the capital of peace and tranquility. After its construction the city became not only the seat of the emperor but also the center from which the leadership of the empire was exercised. Modern Kyoto has become not only the capital of the majestic empire, but also a cultural, political and business center. In 1467 in Japan began a war that lasted until 1477, during which time the city was badly damaged. For two centuries, attempts were made to restore the former power of the capital. Only by the end of the 16th century under Toetomi Hideyoshi did the rebirth of the city begin.

The prosperity of the city continued after the transfer of the capital of 1869 in Tokyo. Great attention was paid to the development of culture and education. Industry also developed rapidly, unlike other prefectures of the empire.

Features of the city

As for the peculiarities of Kyoto, they are that the city harmoniously combines ancient architecture and modern buildings. The center of the city is more modern, but if you turn aside, the streets where you can plunge into the past. On the territory of the former capital of Japan are the only schools in the country’s maiko, where they teach the art of geisha. It should be noted that Kyoto is one of those prefectures, where people follow the traditional way of life. You can see this by visiting the bazaar street (Shotengai). There are many specialized stores where goods are made by hand, such as handmade paper (washi).

When you come to Kyoto, you can taste not only national dishes. Here you can taste French and Italian cuisine. The local chefs not only make the dishes delicious, but also prepare them in an unbelievably beautiful way.

To sum up, we would like to note that Kyoto is considered one of the largest centers of numerous cultural and historical heritage. There are more than 2000 architectural monuments dating back to different eras of the formation of the modern city.