Krynica Morská sights and its surroundings

Krynica Morska is the largest and most visited resort on the Vistula Spit. It is located almost in its central part, which makes it an ideal starting point to explore the whole area. The advantage of Krynica Morska is that it is located both on the Baltic Sea, more precisely on the Bay of Gdańsk, and on the Vistula Lagoon. The town is very cosy, with only about 1500 inhabitants. In terms of population it is one of the smallest cities in the country. However, you can not say that you can get bored here. On the contrary, in terms of area Krynica Morská ranks 23rd among Polish cities, which already means that there are many attractions. Suffice it to say that the city has one seaport, four harbors and several places to swim, located on the shores of the Gulf of Gdańsk. So Krynica Morska is definitely worth your attention.

The first mention of a settlement in this area dates back to the mid-13th century. At that time there was a settlement, which in 1309 was included to Elbląg Komturia.

Then the town was mentioned under the names Lipa, Liep or Leb. It began to develop rather quickly, mainly because of its convenient location – it was on the route of the trade route from Gdańsk to Königsberg, which went through the Vistula Spit. At the beginning of the 15th century there was founded the inn of Mikolaj Wildenberg, which was later used by travelers as an overnight stay. It was then that the town was first mentioned in an official document as Kalberg. 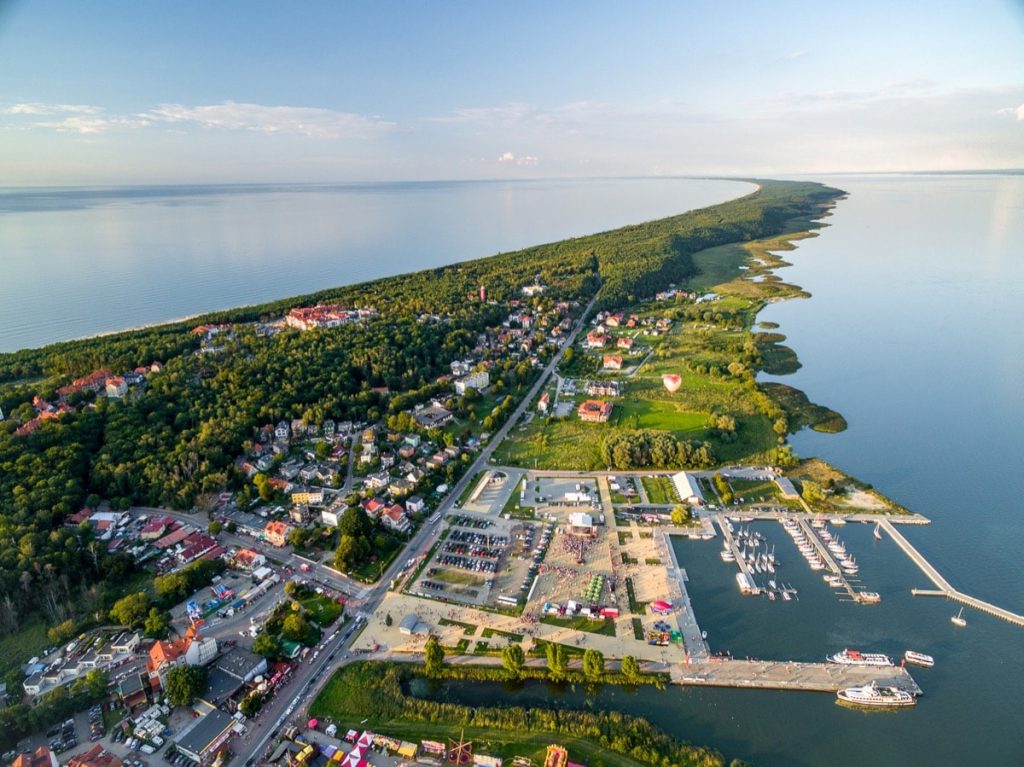 The history of Krynica Morská

After the Second Peace of Torun (1466), which ended the Thirteen Years’ War of 1454-1466 between Poland and the Teutonic Order, Poland received Gdańsk Pomerania . The Kos, including today’s Krynica Morska, had been under Polish rule for several centuries. After the partition of the territory, the town became the property of Elblag, located in Prussia. Although the local inn housed the royal post office (on the postal road from Berlin to Krulewiec ), there were even stables for horses nearby, the town was of little importance at that time.

Chronicles of 1814 say that only four families lived here. The situation changed in the second half of the 19th century when the sea connections with Krulevets and Elbląg were opened. The first tourists began to arrive here, and in 1872 the joint-stock company “Sea Pool” was founded in Kalberg. Over time, it became a fashionable seaside resort, especially developed after World War II, when the area fell back under Polish rule. Interestingly, immediately after the war, the name of the city used a direct translation from the German, and the city became known as Lysa Góra, and after 1947 – Lysica. The current name – Krynica-Morskaya – appeared only in 1958.

Krynica Morska is a fairly typical resort . There are numerous holiday centers, hotels and campsites, as well as a number of coastal shipping harbors that connect Krynica with Tolkmicko, Elbląg and Frombork. Of course, there are also interesting places to visit.

Almost in the center of the city on a small hill there is a lighthouse, which is visited by almost every tourist who is in Krynica. The first lighthouse was built here back in 1895, but it has not survived to this day because it turned into ruins on May 3, 1945 when retreating Germans mined and blew it up (several Soviet soldiers were killed under its debris then). In 1951, 15 meters from the ruins of the old lighthouse was commissioned a new one, which is still in use today. 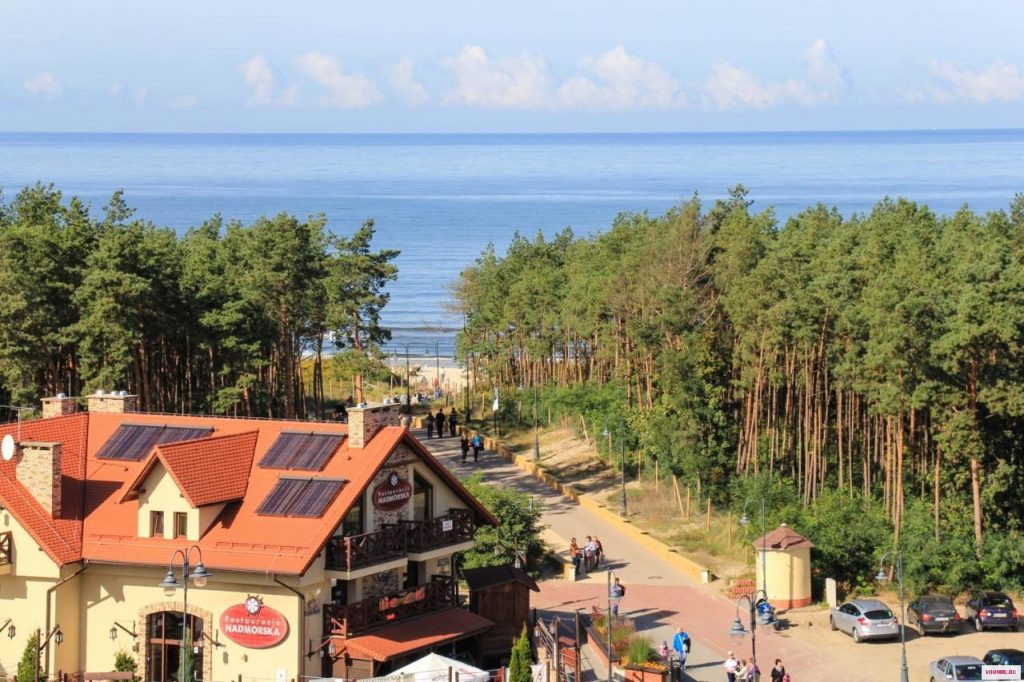 In the center of the village there is also an interesting statue of a fisherman pulling a net out of the water. In common parlance it is known as the Fisherman’s Monument, although in fact it is a monument to the first settlers who came to Krynica Morská after World War II. This is clearly evidenced by the inscription on it: “It was not a storm at sea, but the wind of history has brought us here. It is also worth visiting the local seaport, located on the shore of the Vistula Lagoon, also in the central part of the city. It consists of two independent marinas – fishing and yacht-passenger, which is also a base for the fleet, which cruises on the Vistula Lagoon.

It is worth noting that in Krynica Morskie there is the only street in Poland, the name of which is associated with the TV program – Telexpress Street.

3. The biggest attractions, what to see and where to go

The city has a lot to offer for tourists – from the fantastic beaches and numerous schools of sailing and surfing, rentals of bicycles, boats and water skis, motorboat cruises to the rope park. But the most amazing thing – is the surrounding nature, which is still almost unspoiled. The surroundings of Krynica Morskaya are located entirely in the Vistula Spit Landscape Park, and in the western part, in the area of Przebrno, is the Buka Spit of the Vistula Reserve. There are many hiking and walking trails in the area, which should satisfy even the most ardent travelers. 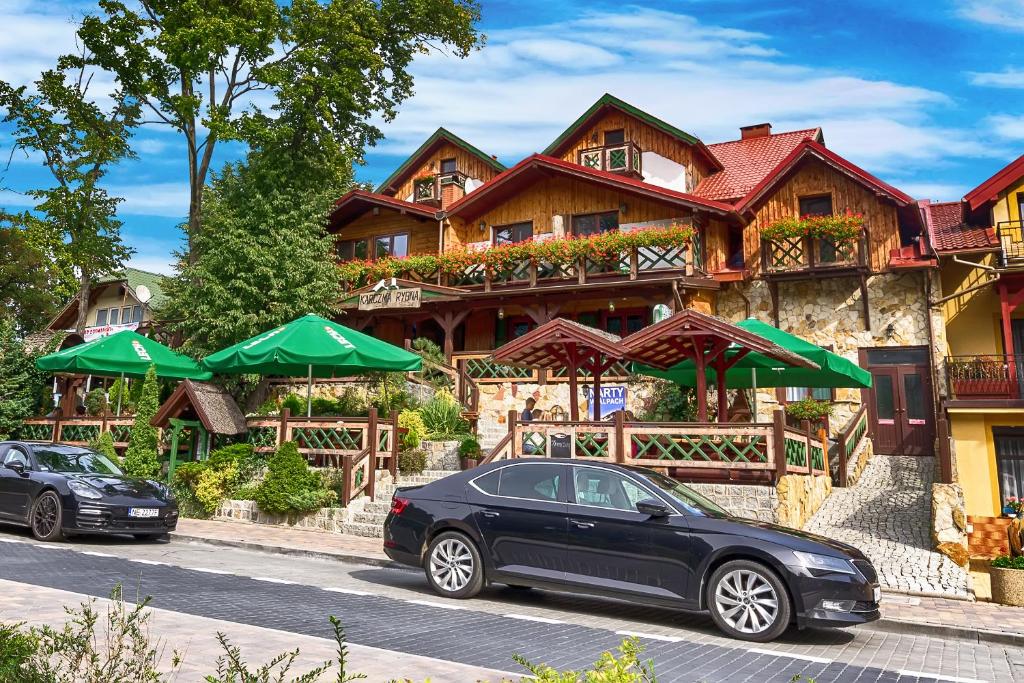 3. The biggest attractions, what to see and where to go

You should walk at least a few of them. About a 30-minute walk from the center is Camelback Ridge (locals call it Wielka Garbnica). It is the highest point of the Vistula Spit and also the highest permanent dune in Europe, which is almost 50 meters high! It is certainly worth visiting, as it offers a breathtaking view of both Gdańsk and the Vistula Lagoon. Another 40 minutes of walking to the east, and we reach Góra Pirata (about 6 km from the center of Krynica), another hill with an interesting view of both banks of the Vistula Spit. There is also a wooden observation tower. The view from above is even better! Further to the East, about 4 km from the Russian border is Nowa Karczma (Piaski), the name of which comes from the tavern that used to exist in the area in the Middle Ages. Today it is a small resort town with a dozen spas, guest houses and a very beautiful beach on the shores of the Gulf of Gdańsk. Walk from the center of Krynica takes about 3 hours – it is about 12 km, but you can also get there by bus.

4. Attractions in the vicinity of Krynica Marine

At the beginning of the Vistula Spit is the tourist-filled village of Kąty Rybacke, now famous for the continuing Vistula Spit moat, which should shorten the sea route between the Vistula Lagoon and the Bay of Gdańsk. 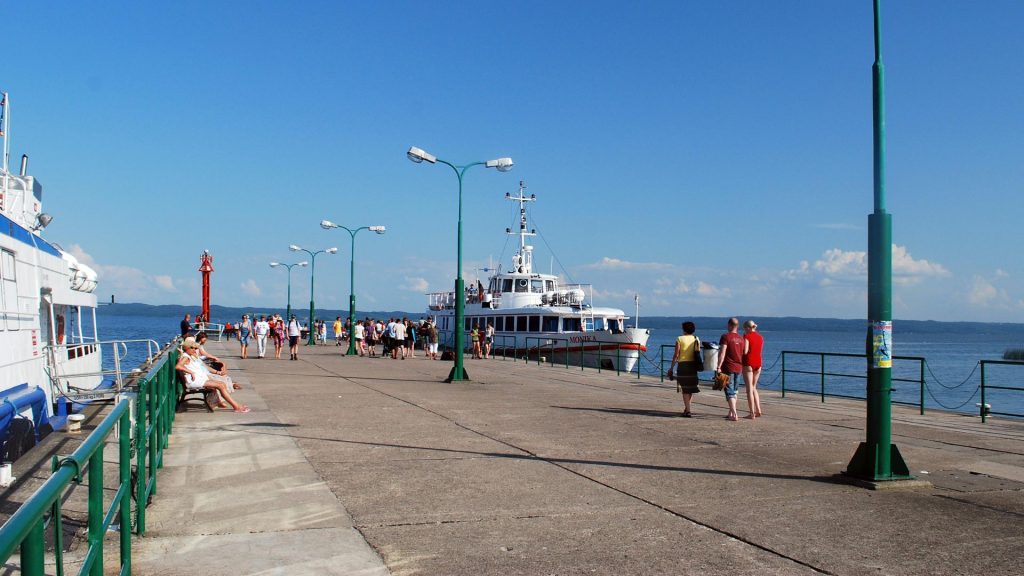 4. Attractions in the vicinity of Krynica Morská

To the west of the spit, in the direction of Trigorod, is Stutowo. Here there is a museum in the former Nazi concentration camp Stutthof and the famous bridge, which was shown in an episode of the movie “Four Tankers and a Dog” as a German soldier’s post captured by the main characters. Nearby is the charming town of Stegna, famous for its amber museum “Amber Room”.

The towns on the other side of the Vistula Lagoon are no less interesting and are full of monuments and tourist attractions. In Tolkmicko you can see the remains of the old fortifications of the city. Frombork you can visit the Nicolaus Copernicus Museum, the local cathedral and the basilica of the Assumption of the Blessed Virgin Mary and St. Andrew. 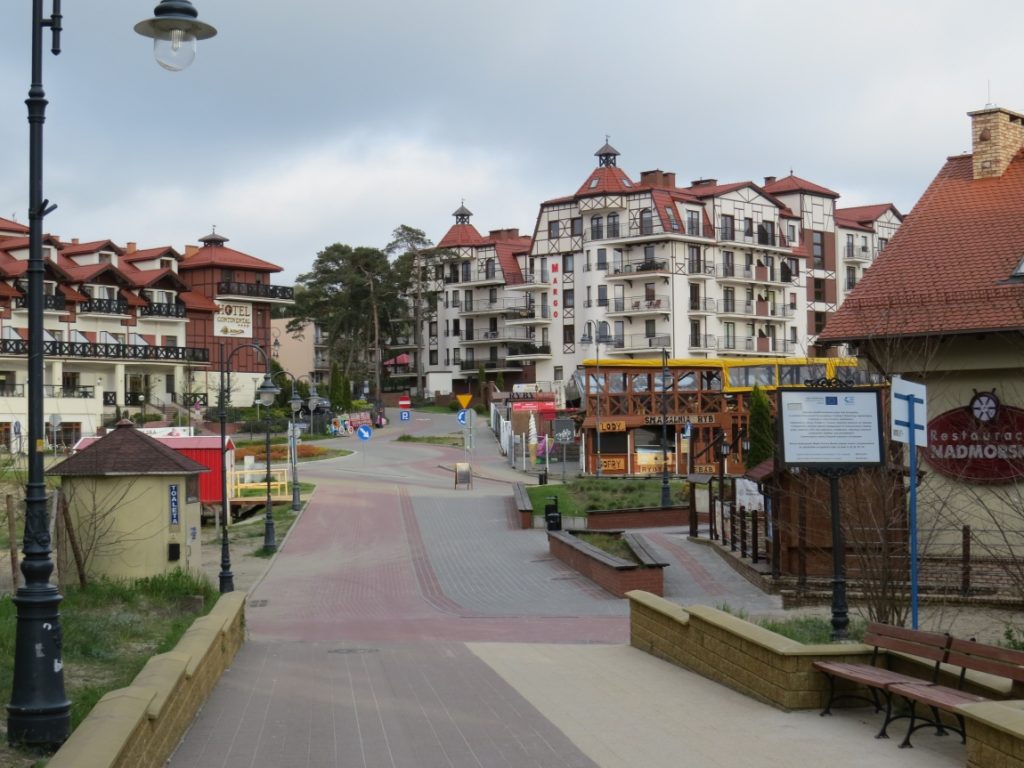 When visiting Krynica Morská, you should also consider a longer trip and go to, for example, Elbląg, from where you can take a cruise on the Elbląg-Ostróda Canal. Or you can go a little farther, to Malbork, to visit the largest castle that was built by the Teutonic Knights in what is now Poland. You can also go to TriCity or simply to Gdańsk itself, which is undoubtedly the most interesting city on the entire Polish Baltic coast. If possible, you should also consider a trip to the Kaliningrad region, if only to see what remains of Koenigsberg. 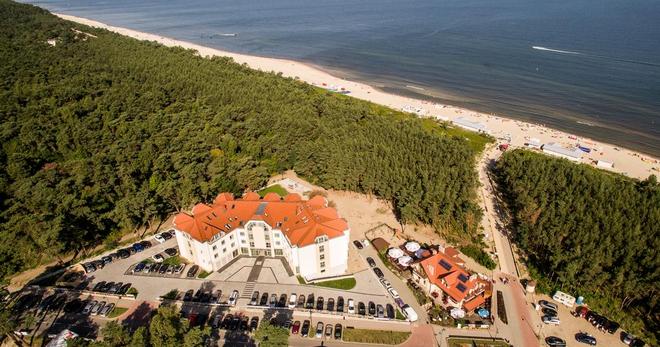 Krynica Morska is a town located in the Pomeranian Voivodeship, in northern Poland, on the shores of the Baltic Sea. It is invariably popular among tourists for its interesting historical and natural attractions.

READ
What to eat in Taormina, Italy: 10 typical dishes

The settlement was first mentioned in historical documents in 1424, and since 1840 it became a popular summer resort. The right to be called a town it got in 1991. Krynica Morská resort has a wealth of natural resources in the form of sandy beaches and high dunes, ecologically clean forests, which are famous for a variety of flora and fauna.

In addition, there are springs of unique thermal, mineral and healing waters. The resort also offers a wide range of entertainment. Although Krynica-Morskaya has a city status, it is home to no more than 1500 people.

Within the town there are not many architectural attractions: these are primarily old boarding houses and villas, built in the late XIX – early XX centuries. Among the most memorable objects, which are definitely recommended to tourists to see, are the following:

Hotels in the resort of Krynica Morská, Poland

Krynica Morská enjoys a good geographical position, and every year it is thronged with people who want to have a rest and recover. They may choose to stay in one of the many hotels in Krynica Morská:

There are restaurants at many of the hotels and in the city where great service and delicious food await the visitors. Many also specialize in serving great fish with optional side dishes. Portions are all large and at economical prices. In addition to Polish dishes, you can enjoy a delicious pizza or hamburger in the restaurants. In Krynica-Morska you can visit Restauracja Four Winds, Restaurant & Cafe Milano, Strzechowka, Karczma Rybna Pensjonat Polonia, Karczma Krynicka.

The nearest airport is in Gdańsk, 89 km from Krynica Morskie. There are also bus services to cities such as Elbląg, Frombork, Olsztyn and Warsaw. To explore the nearby sights it is worth thinking about renting a car.