Kruger National Park is South Africa’s first, largest and most popular nature reserve. There are a total of 11 gates in the park – 3 in the northern part, 5 in the western part and 2 in the southern part. The main one is the Kruger Gate, decorated with a head statue of the park’s founder and Boer chief.

Save money on travel!

Access to the park opens at 6 a.m. from April through September, and 5:30 the rest of the month. Access to Kruger National Park stops at 6:30 p.m. in April-February and November-December, 5:30 p.m. in May-July, and 6 p.m. the rest of the time. Campground gates are also locked at night, and open about the same time as the entrance gates (1 hour earlier in November-January) . The eastern border of the park is also the border between South Africa and Mozambique, with the only Giryondo Gate serving as a border crossing point.

Kruger lies on a plain known as the Lowveld (from Veld, Dutch for “field”). Its altitude does not exceed 600 m above sea level, but less than 100 km to the west lies the huge 1000-meter drop of the Drakensberg Escarpment. Behind it begins the Highveld, on which Joburg and Pretoria are located. In Kruger itself, the low Lebombo Mountains run along the eastern border. The rest of the territory you’ll see nothing but classic savannah and a few ponds. The park’s largest river is the famous Limpopo, which forms its northern boundary. The administration is located in Skukuza in the southeastern part of the park, the same location as the park’s main campground. The best time in Kruger is from October to March.

It’s not the photogenic landscapes that make the park attractive, but the fauna and flora – including 147 species of mammals, 507 species of birds, 148 species of reptiles and amphibians. Despite the dry climate, there are more than 300 species of trees alone. Transportation and large population centers gravitate toward the southern part of the park–the amazing thing is that there are more animals in southern Kruger than in the sparsely populated northern part of the park. The chances of collecting the full Big Five (elephant, rhino, lion, leopard, and buffalo) are especially great in the triangle formed by the Pabeni, Numbi, and Kruger gates. The protection of the local nature has continued uninterrupted for more than a century and tourist activity for almost 90 years (since 1923). During this time, the animals have become firmly accustomed to observers, so great pictures in the Kruger are guaranteed. Another “chip” is the wealth of cultural and historical heritage on its territory. More than 250 sites in the park are protected monuments of civilization, including more than 100 rock paintings made by the ancestors of the current Bushmen. In 2002, South Africa, Mozambique, and Zimbabwe announced the creation of an international reserve, which, in addition to Kruger, would include the protected areas of its neighbors.

Nowhere else in Africa’s wilderness can you find such a choice of places to stay and such opportunities to explore nature. You can stay in a “shelter” of several huts or tents (Hide), a small campsite without a restaurant but with a kitchen (Bushveld Camp), a large campsite with a restaurant (Rest Camp) or a comfortable private campsite (Bush Lodge). The larger camps range from self-catering accommodation (which entitles you to use the facilities) to an expensive gästhaus with full rooms and bathrooms. All Kruger camps and lodges can be booked with the South African National Park Service (in Pretoria, +27-012-4289111, 7.30-17.00 weekdays, 8.00-13.00 Sat; reservations@sanparks.org) .

Visitors arriving by their own transport from Hazyview and Nelspruit can book a tour with park staff at the gate:

At last the park service arranges the trips “Through the Wilderness Trails” – there are 7 routes for groups of 4-8 people (from 12 years old) with a ranger. They include 3 overnight stays in tents, and begin on Wednesdays and Sundays (start at various campsites). It costs 3900 p. per participant.

You can spend in Kruger as much time as you have at your disposal. There’s plenty to do in just one day – especially if you base yourself in Skukuza, a pleasant spot at the confluence of the Sabie and Nwaswitshaka Rivers, where you can drive from Hazyview along three roads through different gates, each promising encounters with game. A video of buffalo fighting lions and crocodiles (Battle of the Kruger), considered a masterpiece of amateur reporting, was taken in 2007 on the road from Numbi Gate to Skukuza. The campground is home to an information center, a park museum, and the James Stevenson-Hamilton Memorial Library, the gentleman who served as the park’s chief gamekeeper from 1902 to 1946! A monument to the veteran can still be seen next door to the campground, along with the service dog cemetery, the old bridge (1912), and the train station turned Selati Grillhouse restaurant (+27-013-7355658; 7:30 to 10:30 p.m.) . Leaving Hazyview early, you can have time to see it all and get in for a day bush walk ($300) . There’s even a Wooden Banana cafe (+27-013-7355992, 7-9pm) and a pool at the campsite, especially for day-trippers.

Many companies do short tours to Kruger, for example:

Most independent visitors use their own transportation. Renting a car is easier in Nelspruit – there are plenty of offers both at Kruger-Mpumalanga Airport and in the city itself (Avis, +27-013-7570-911, www.avis.co.za) . Depending on the class of car costs an average of 300-400 p. per day. The roads in the park are ok, there are enough signposts, and the road service (+27-082-3229733) works. Outside the park, avoid driving at night, and on weekends, get to the gates early to avoid lines.

Most hotels in Hazyview and Nelspruit offer lodging at an average price of P600. 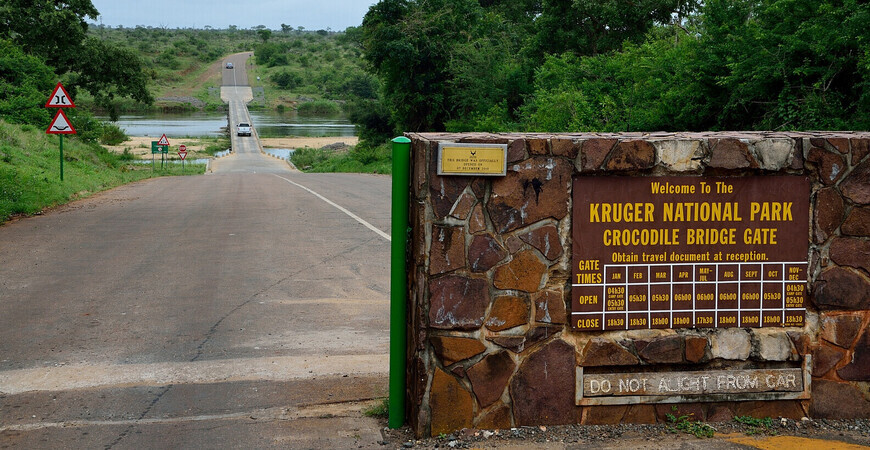 Kruger National Park is the very first natural protected area in South Africa. The national park was founded in 1926. It is located in the south of the African continent, in the northeastern part of South Africa. The park is named after the president of the country, Paul Kruger, who fought for the rights of the Boers and the sovereignty of the Transvaal.

READ
History and sights of the Tower of London

Kruger Park is located between the Limpopo and Crocodile rivers. The eastern border of the park runs along the border with Mozambique. Inside the park is divided into 3 parts: northern, central, and southern. Kruger National Park is part of the large international reserve “Great Limpopo Transboundary Park,” which also includes protected areas of Mozambique and Zimbabwe.

Kruger National Park has 3 basic fees to visit the area. Payment is made in the local currency, the South African rand.

Cost is per day of visit.

The park’s predominant landscape is savannah: sparse forests, cereal fields, and deciduous forests. Along the border with Mozambique passes the mountain range Lebombo. The highest point of the park is 839 meters, the average height is 260-440 meters above sea level. According to the natural differences, it is customary to divide the park into 5 zones:

READ
How to rest in the Czech Republic: information for tourists

The central part of the park is recognized as the area with the largest concentration of wildlife in the world. Rivers are home to hippos and Nile crocodiles. In the savanna – 17 species of antelope, giraffes, warthogs, zebras, cheetahs, jackals, big-eared foxes. Of the primates there are green monkeys and baboons.

All animals from the “Big Five of Africa” are found in the park: lions, buffalo, leopards, elephants and rhinoceroses.

The park management reports the following numbers: 12 thousand elephants, 5 thousand rhinos (the total number of black and white), 1.5 thousand lions, 1 thousand leopards and 2.5 thousand buffalos. The area is home to 51 species of snakes, including tree pythons dangerous to humans, the spitting cobra, and the black mamba.

Kruger Park is home to more than 400 species of birds, including several species of eagles, vultures, guinea fowl, and exotic birds such as Tocos. The best birdwatching camps are Shingwedzi, Lower Sabi.

Visiting the park for animal and bird watching is recommended from March to October, during the dry season. During this time, the trees shed their leaves, making observation easier.

It is customary to visit Kruger Park for a few days. You can stay at one of the 30 equipped parking lots. The southern part of the park is most popular with tourists. Here there are not only comfortable campsites and lodges, but also stores, restaurants and even a gas station. Particularly famous is the Lower Sabi campground, which is located at the site of the elephants’ night watering hole.

There are also campsites in the central area, the most popular of which is Lebata. There is also the Elephant Museum, which exhibits a collection of skulls and tusks. The central part is home to the largest number of herbivores and wildcats that hunt them. There are parking lots and cafes with open terraces near the watering places.

The Kruger National Park’s official website offers online reservations. Lodging in the park costs from 89 rand for the most budget accommodation. Minimum cost is offered for tent accommodation. During high season (March to October) it is recommended that you make reservations in advance. All campgrounds are equipped with toilets and showers. The 5-star lodges have gourmet restaurants, swimming pools, and golf courses.

READ
The subtleties of the East. Holidays in Jordan 2021

There is even an Avis rental office in the park. It is located in the Skukuza Lodge. You can drive around the park on your own or take a guided tour. The cost of a daily group tour starts at 198 rand.

In addition to exploring the wild inhabitants of the African continent, the park offers opportunities to explore the cultural and historical heritage of the region or to engage in active tourism. The most popular attractions are:

Trekking enthusiasts can take a guided hiking tour along one of the equipped trails (there are 7 in total). A list of hiking trails with descriptions is available on the official Kruger Park Africa website. If you are wary of hiking, you can choose off-road adventure tours, biking or golf tours.

How to get to Kruger Park in South Africa

The park can be accessed through one of 9 gates. All gates are open from 06:00 to 17:30/18:00 from April to September and 05:30 to 18:00/18:30 from October to March. The exact gate opening times are published on the official South African National Parks website. Inside the park the roads are excellent, but outside the park there are problematic sections on the way into the park, depending on where you depart.

There are 3 airports near the park:

Tourists who do not have an international car license can book a tour with a visit to the Kruger National Park in South Africa. Tour offers can be viewed on the official website of South Africa’s parks.