The Kornati in Croatia are the most numerous and dense cluster of islands in the Adriatic Sea and at the same time one of the most beautiful archipelagos in the entire Mediterranean. It is a dream destination for sailors, divers and crystal clear sea lovers, but also for those who enjoy peace and quiet, as the islands are almost deserted and relatively few tourists visit them.

The Kornati archipelago is made up of about 150 islands, islets and rocks with a total surface area of 69 square km, stretching for 35 km long and up to 13 km wide. The archipelago includes all islands located between the islands of Pashman and Murter in the north, west of Dugi otoku and east of Girier.

Most of the islands are devoid of vegetation; grass appears here and there, and some have vineyards, olives, figs, and southern fruits. Many of the mainland formations have very steep and rocky southern shores, with numerous karst cliffs , caves and grottoes which form amazing forms, inhabited by numerous species of birds. 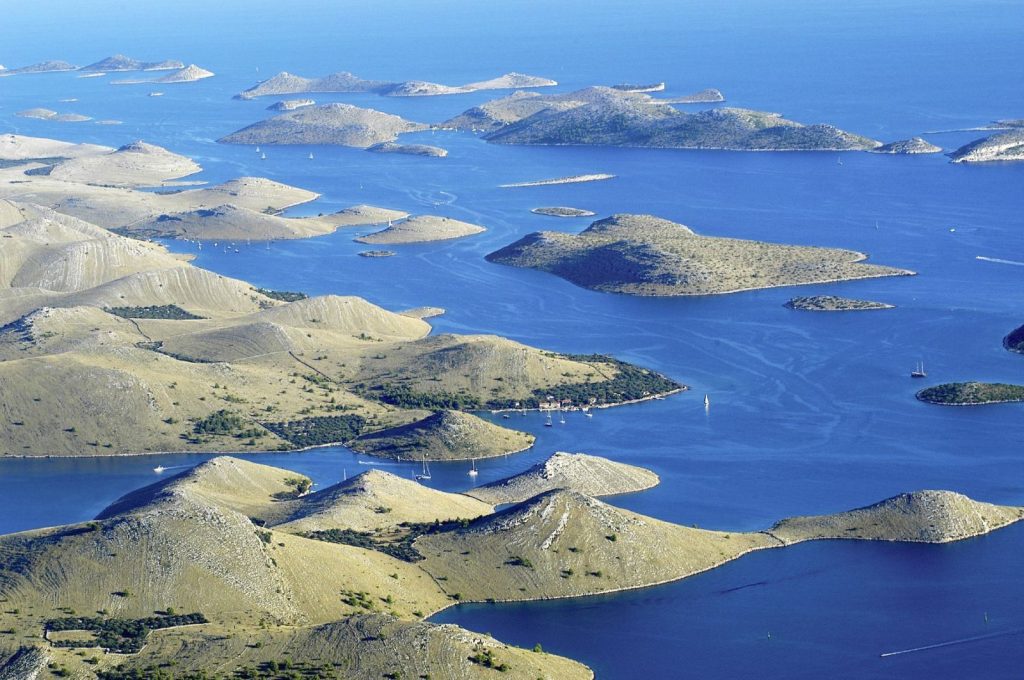 The highest rocks can be seen on the islands of Klobuchar (80 m), Mani (65 m) and Rashop Veli (64 m). Because of the limestone structure there are no springs and water courses here, although in some karst hollows and cisterns the accumulated rainwater persists for most of the year.

The climate on the islands is mild, there is very little snow, and the surrounding waters are undoubtedly the richest in flora and fauna in the Adriatic.

The present name (originally Coronati, “crown, crown islands”) comes from the name of the largest island of the archipelago, Cornat (32.62 sq. km) and was adopted in the 17th century. Before that (before the 14th century) it had many names: Insula Sancte Marie, Stomorin, Tarac, Toreta.

READ
Daytrips to Malta - is it worth it?

The islands of the archipelago were inhabited from the Neolithic until the 18th century. (The town of Toreta is mentioned in the documents of that period). Today they are practically uninhabited – from time to time appear only the owners of a few crops, keepers of the national park. Today the islands are practically uninhabited – only occasional owners of a few crops, national park rangers, etc. (although some Croatian sources even mention 7 permanent inhabitants). 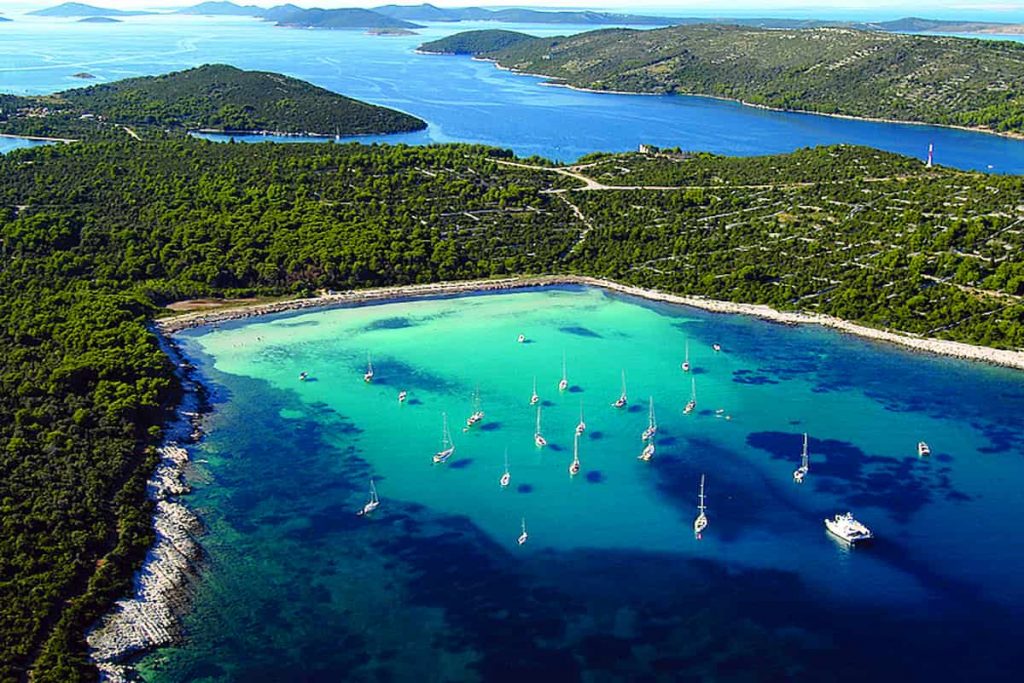 From time immemorial the Kornati were the property of the inhabitants of Zadar, even when Venice ruled (from the 16th century), it gave them for temporary use to Zadar families who grazed sheep and grew grapes and olives.

In 1980, the Kornati Islands were declared a national park (Nacionalni Park Kornati). Its area is 234 square kilometers. It covers the entire Kornati archipelago and the sea surrounding the islands (up to one nautical mile from the coast). The archipelago is named after its largest island, Kornat (32.5 sq km), which is 25 km long and 2.4 km wide. The highest peak on the island of Kornat – Metlina , is at an altitude of 237 m above sea level.

READ
The Island of the Gods, the Ocean, and Enlightenment: Bali, Indonesia

Between the long and steep shores of the islands can be seen numerous rocks and picturesque bays. The light golden color of the limestone together with the unpolluted blue of the water and the sky create a typical Adriatic landscape and a unique atmosphere. There are many fans of diving, sailing and untouched coastal nature, as well as the silence and sunshine. 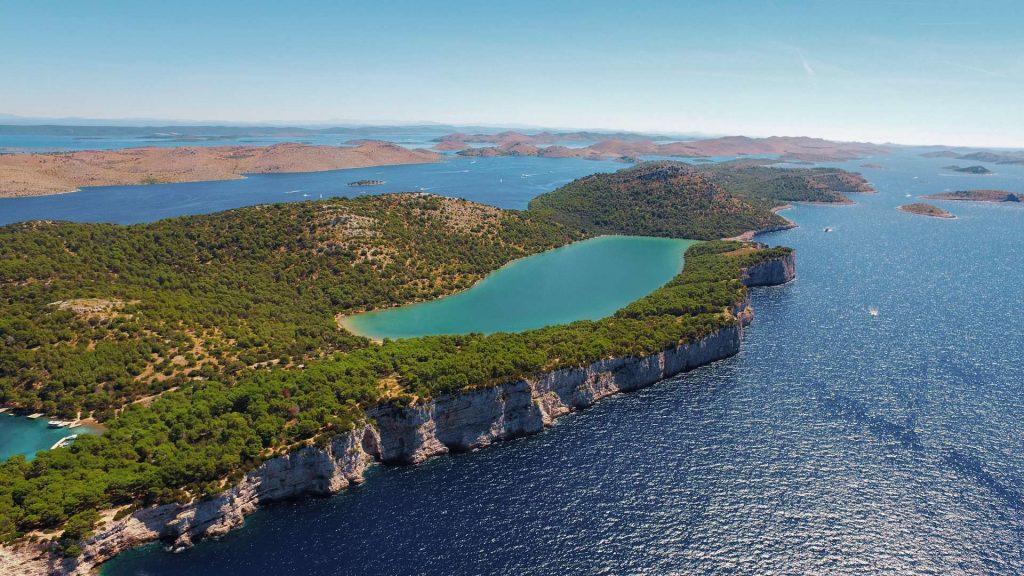 On the islands, because of their limestone nature, vegetation is scarce. However, endemic cornflowers can be found in the crevices of the sunny cliffs and small forests of holm oak and manna ash remain on some islands.

Since the vegetation here is not very lush, there are almost no land animals, with the exception of lizards and rare for this area gray hares and martens. However, the bird life is interesting – on the rocky cliffs of the Kornati Islands you can see pigeons, herring gulls, swifts, cormorants, hornbills and eagles.

On the other hand, the marine life is very funny . In the park you can easily observe this underwater world (even without diving). The waters in the park are clear and the bottom is largely formed by ungrown limestone rocks, so even from a boat you can see fish swimming by.

The waters around the islands are home to up to 346 species and subspecies of marine plants. Animal life is represented by 295 species . You can see 25 species of sponges and, for example, yellow coral and beautiful red coral, meet starfish, sea cucumbers (commonly known as sea cucumbers) and more. The dolphins that occasionally appear are very interesting.

Kornati National Park is located in Middle Dalmatia, in the Kornati archipelago, near Zadar, Sibenik and Biograd na Moru.

READ
What to see in Bristol, UK

The total area of the park together with the marine area is 220 sq. km. The Kornati Nature Park is unique in the density of the islands. The archipelago is separated from the neighboring islands of Pashman and Dugi otok by straits and from the Murter Island by a bay, which is sometimes called the Murter Sea.

Two-thirds of the territory of the nature park is Kornat Island – the largest island of the archipelago with an area of over 32 square kilometers. The length of the island – 25 km, width of about 2.5 km. There are no permanent residents on the islands of the archipelago.

The onshore part of the park is completely privately owned, so when you visit the park, behave as a considerate and caring guest. The relatively large distance from the coast, the biological richness of the marine area, good meadows for raising domestic animals, a good place for shelter during bad weather – all these are the reasons that have made the Kornats throughout its history both a welcoming and inhospitable territory. The first evidence of human presence on these islands dates back to the Neolithic period. A remnant of a stone axe has been found on Cornat Island.

Some of the geological processes that took place in the park in the distant past can be clearly seen in the famous Kornati “crowns” . The sheer cliffs of the Cornatian islands turn toward the open sea – the most popular natural phenomenon of the park.

“Coronas” are the slab of a large tectonic fault stretching from the Istrian peninsula to Middle Dalmatia, created by the northward movement of the African continent and its hammering into Europe. Processes of corrosion, erosion and abrasion have further embellished the huge slab. The longest “crown” above sea level is on Mana Island at 1,350 m, and the highest is on Klobuchar Island at 82 m. “Crowns” are also located under the sea, with the deepest “crown” is on the island of Piskera at a depth of 90 m. Climbing the “crowns” is strictly prohibited!

READ
Holidays in Greece on the island of Thassos

Viewpoints of the Kornati Park

It is too difficult to choose any peak among the many peaks of the Kornati Islands and say that it is the best. The highest peak, Metlina (237 m), is on Kornat Island, but it is very difficult to reach. The peaks of Opata in the southern part of Kornat Island and Litni Wierch on Veloj Smokica offer a beautiful view of the Murter Sea and the Kornati National Nature Park.

“Crowns” under the sea.

Diving in the Kornati National Park is allowed only to organized groups with a permit.

There are nine areas provided for diving in the park: Kornati, Samograd, Okluch, Mala Panitula, Vela Panitula, Rasip, Mali Rasip, Mana and Borovnik. It is difficult to choose any one of these areas – each is good and unique in its own way. Consult the scuba diving center in the park when getting your permit. During the dive nothing may be touched or taken out of the sea. Night diving is also prohibited. The allowed diving depth on the Kornati is 40m.

The first colonization of the Cornate Islands dates back to Illyrian times. The small rectangular buildings, singly or in groups, and ruined structures bear witness to the dense population of these islands in prehistoric times. Animal husbandry was the main occupation of the inhabitants. They were also engaged in fishing.

Another interesting building from Illyrian times is the old Christian basilica located at the foot of the fortress of Toureta. Today, a large part of the apse and part of the foundations remain. Not far from the church, there are traces of the foundation of an earlier structure, which suggests that it might have been a Templar or Benedictine monastery.

Late antique to early middle age fortress of Tureta on Kronat Island, probably from the 6th century, is one of the most impressive Byzantine era buildings. It is believed that its purpose was military, to guard and control the sea lanes in the then rather stormy Adriatic Sea.

In the immediate vicinity of the fortress, on the island of Piskera (Core), fishermen built a settlement with 36 houses and warehouses, eight mooring places and a sliding bridge between the islands of Vela Panitula and Piskera. In those days, and given the size of the islands, it was quite a large settlement. As part of the settlement was also built and a small church, illuminated in 1560. In that settlement fishermen lived only during the “summer gloom” – the best time for fishing, when there is no moon in the sky. Apparently, with the fall of the Venetian Republic at the end of the 18th century, the fortress and settlement were quickly abandoned. It is interesting that today there is almost no trace of the former settlement, and of the fortress only barely visible ruins remain. But the church has been renovated and now fulfills its sacred functions.