Mount Kilimanjaro is the highest mountain in Africa

Kilimanjaro is a large dormant volcano located in Africa in Tanzania. It is the largest freestanding mountain in the world, and the highest mountain in Africa. It is also included in the list of the Seven Summits of the planet.

Remarkably, the snow-capped peak of Kilimanjaro lies among the flat, vast plains of the African savannah. Its rich ecosystem combined with its impressive physical features make the mountain worthy of its place on the list of UNESCO World Heritage Sites.

Kilimanjaro is located in northeastern Tanzania about 20 km from the Kenyan border. The volcano is located on the territory of the national park of the same name.

In fact Kilimanjaro is a set of three peaks – Kibo, Mawenzi and Shira. Kibo is the most massive, impressive and high. It is a dormant volcano. It is he who is associated with Kilimanjaro. It is its photos that appear on any browser query “Kilimanjaro”.

The peaks of Mawenzi and Shira are extinct and inactive volcanoes.

The elevation of Kilimanjaro (more specifically Uhuru Peak on Mt. Kibo) is 5,892 meters above sea level. The height of Mawenzi is 5,149 m and the Shira is 4,005 m. The height of the volcano from the base is over 4900 meters. 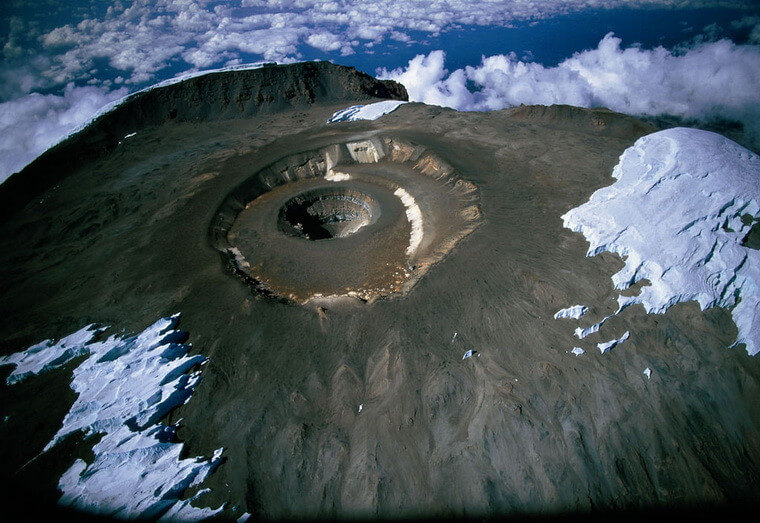 The crater on Mt. Kibo

According to reports received in the 19th century from the Maasai, Lake Chala (40 km to the east) was in ancient times the site of a village that was destroyed by an eruption. But there is no official information about Kilimanjaro eruptions. Despite this, Kibo periodically emits gas in the crater. This suggests that the volcano is still asleep and cannot be considered extinct.

Origin of the name

The exact translation of the name “Kilimanjaro” is unknown, but there are a number of speculations.

The name first appeared in 1860. European explorers reported that it was the name of the mountain by the local Swahili people. The name sounded like “Kilima-Njaro”, which in translation (presumably) means the mountain of greatness or the mountain of caravans. This is due to the different interpretation of the word “nyaro” or “jaro.” Kilima, as you may have guessed, means “mountain.”

According to others, from Swahili, “njaro” means “shining” or “white.” Therefore, Kilimanjaro can be translated as the Shining or White Mountain. This name is perhaps more suitable because the volcano has a white ice cap on its summit. 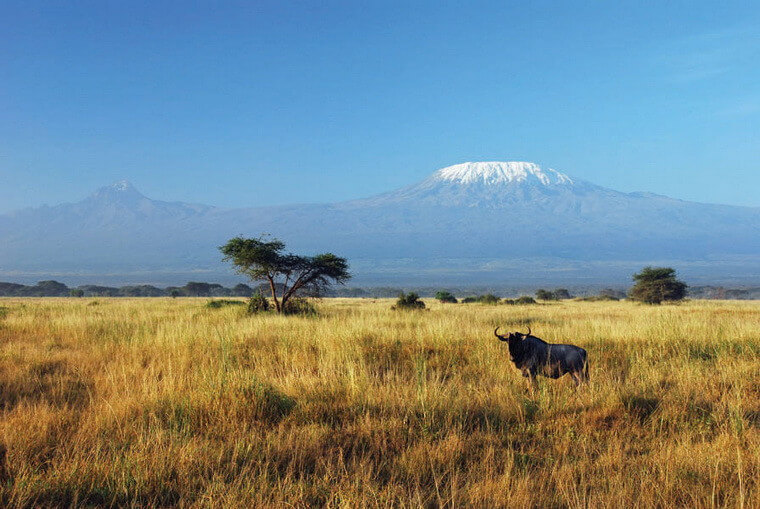 The snow of Kilimanjaro

Interesting fact – In fact, in Swahili the name “kilima” translates as a hill or a small mountain. Whereas “mlima” means a full-fledged “mountain”. Therefore, it is not quite clear why such an imposing mountain was given a diminutive name. Perhaps the first scientists misunderstood the interpretation of the words, and “kilima” stuck to it.

Another theory suggests that the word “kileman” comes from “kilemga”. From the language of the Kichaggi people it means “victorious”, or “kilelema”, which means “becoming difficult or impossible”. The second part of the name, jaro, probably referred to a bird or a leopard. That is, the free translation sounded as “a place which the bird will not fly over” or “a place which defeats the bird or the leopard”.

In addition, there is speculation that the name came from the words “kilemanjaare” or “kilemajyaro”. From the Wachagga language it means infallible.

An interesting fact – At the end of the 19th century, the territory of modern Tanzania was occupied by Germany. Then Kilimanjaro was called Kaiser Wilhelm Peak. And it was named the mountain until 1964, when Tanzania gained its independence. But even after that the modern name was not used. Kaiser Wilhelm Peak was renamed Uhuru Peak, which means “Freedom Peak” in Swahili. A little later the volcano became known as Kilimanjaro.

As you climb Kilimanjaro you will pass through several climate zones with different temperatures, plants, and animals.

This zone lies between the heights of 1800-2800 meters. The abundance of plants and animals here is due to the warm, wet climate. Rainfall is about 2000 mm/year.

The altitude of the belt is 2800-4000 m. There are virtually no forests here, but giant heather, crestnut, and lobelia are widespread.

The altitude is 4000-5000 meters. Vegetation is very scarce. Rainfall is scarce. Temperature often drops to 0 o C or even lower.

Height above 5000 meters. The stone desert here is covered with snow and ice. Plants and animals are practically absent. The average temperature here is about -7 o C, but it can drop to -15 o C. The lowest temperature recorded on top of Kilimanjaro is -27 ° C. Snowfall can occur at any time of year, but it is mostly associated with the two rainy seasons in northern Tanzania (November-December and March-May). Precipitation at the summit occurs mostly in the form of snow. The level of precipitation is not more than 500 mm per year.

Interesting fact – The first wedding held just below the summit of the mountain took place on September 21, 2014.

At the foot of the volcano you can meet elephants, giraffes, buffalo, antelope, mongoose, zebra, hyenas and many other representatives of African wildlife. 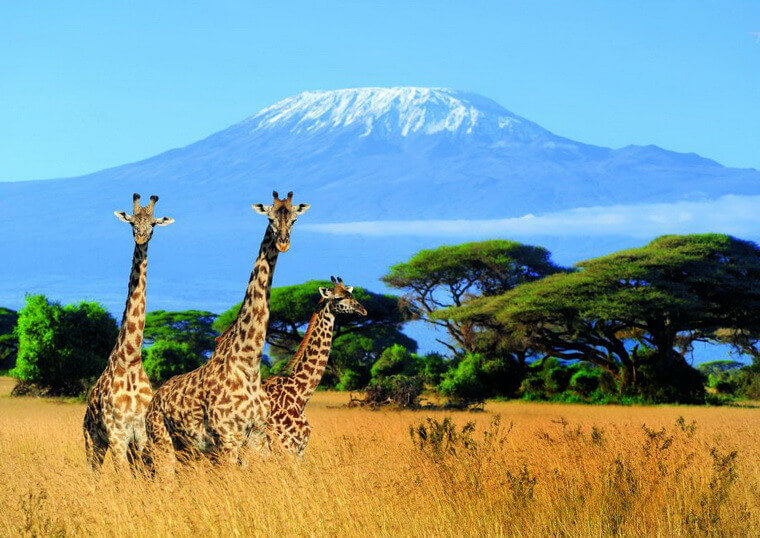 Special attention deserves the ice cap volcano, which in itself is unusual for Africa.

The top of Kilimanjaro lies above the so-called snow line (the boundary between snow-covered and snow-free surface).

At the current rate, most of the ice on Kilimanjaro will disappear by 2040. And after 2060, the ice will disappear altogether. And this is not due to an increase in temperature, but to a decrease in snowfall. Most likely, recent deforestation has reduced the volume of water vapor falling on top of Kilimanjaro in the form of snow. 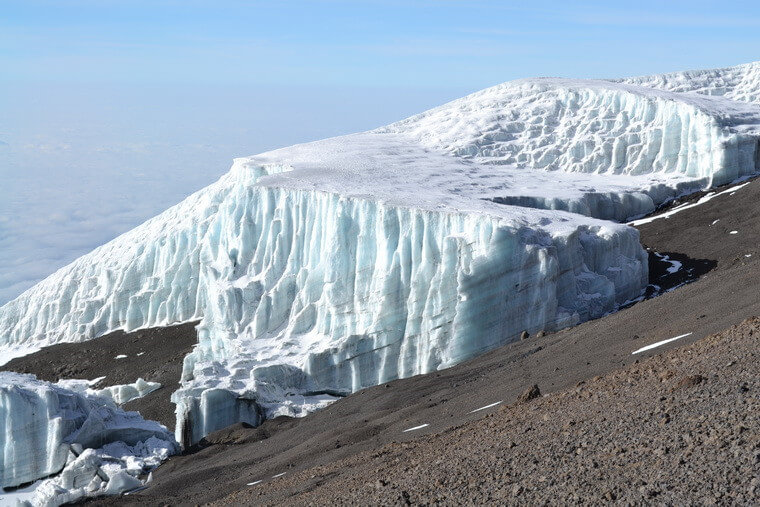 The glaciers of Kilimanjaro

An interesting fact is that on September 26, 2014, the world record for the highest-altitude cricket match was set. On that day, a group of cricket players played on the mountain at an altitude of 5,730 meters.

The first mention of the mountain dates back to the 2nd century A.D. It is marked on the map of the Egyptian geographer and astronomer Ptolemy. May 11, 1848 is considered the official date of discovery of Kilimanjaro by Europeans and the discoverer was German pastor Johannes Rebman.

In August 1861 a Prussian officer Baron Karl Klaus von der Dekken together with an English geologist R. Thornton made the first attempt to conquer Kibo, but because of bad weather they only managed to reach a height of 2500 meters. In December 1862 Carl and Otto Kersten tried to climb the peak for the second time. This time they got as high as 4,300m.

On October 5, 1889, the German traveler Hans Meyer and the Austrian mountaineer Ludwig Purceller reached the summit for the first time.

Kilimanjaro is one of the most accessible high peaks in the world. Even inexperienced climbers can climb it safely. But it is worth remembering that the mountain’s altitude can develop serious altitude sickness in travelers. Most climbers experience symptoms of altitude sickness (headache, nausea, vomiting). Therefore, acclimatization and a slow ascent are very important. 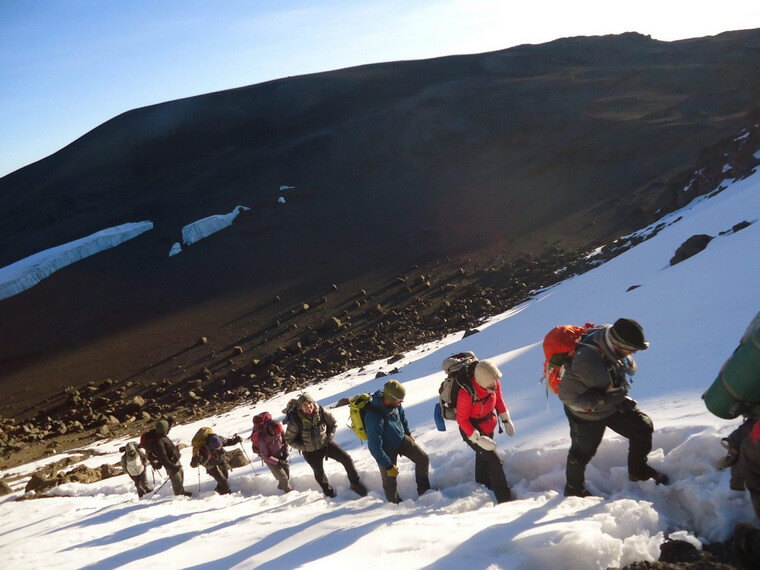 The dangers of climbing Kilimanjaro should not be forgotten. Between January 1996 and October 2003, 25 people died climbing the mountain. 17 women and 8 men between the ages of 29 and 74. And 14 of them died of a severe altitude sickness, 4 of a heart attack and even one person died of acute appendicitis.

This is how people who have conquered Kilimanjaro usually look like

It is an interesting fact that only 60% of tourists make it to the top. The rest, due to various reasons, fall off the route. Therefore, it is highly recommended to be examined before climbing.

Now Kilimanjaro volcano has become a popular tourist destination in Africa. During the 2011-2012 season, Kilimanjaro Park was visited by 57,456 tourists. Of these, 16,425 took advantage of a hike to the summit. But such hikes are quite expensive. The cost starts at $1,000 per person. 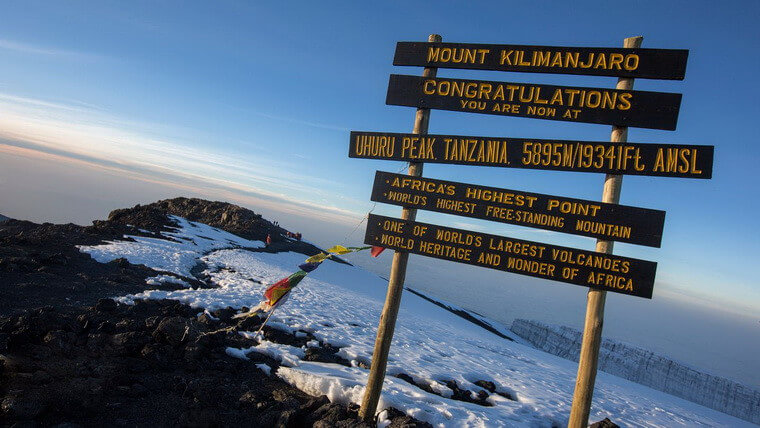 On top of Kilimanjaro.

The Seven Trails of Kilimanjaro.

There are now seven official routes to the summit.

This is the most popular route to the summit of Kilimanjaro. Travelers sleep in tents that porters carry up the mountain. Machame is a very scenic and beautiful route. It can be passed in 6 days, but it is recommended to pass it in 7 days. A special feature of Machame is its topography, allowing hikers to climb gradually and sleep soundly, helping them acclimatize better. However, this route has two drawbacks

It is a very beautiful and practically untouched route. But from day 3 it is combined with the Machame route. Accordingly, there are more tourists. It is not recommended to travel the Lemosho route during the rainy season, as the starting point of the trail is inaccessible at this time.

It connects the northern side of Kilimanjaro with the western side. The area is unspoiled, with great views and few tourists. But it is the longest route. The travel time is 8-9 days.

This route is also known as “Coca-Cola route”. It belongs to the most popular routes. Many tourists find the Marangu route very easy, as it is the only route that can be done in 5 days (which makes it the cheapest option). It is also the only route where you can spend the night in huts. For a better adaptation to the altitude, experts advise taking this route in 6 days instead of 5 days.

The Rongai route runs up Kilimanjaro from the northeast side of the mountain, along the Tanzanian/Kenyan border. This route retains a sense of unspoiled wilderness and offers a different view of Kilimanjaro, approaching it from the north. The main advantage of the route is that it is one of the quietest and most peaceful on the mountain. The disadvantage is the long travel time to the starting point of the route. And it also gets busier when it merges with the Marangu Trail.

The Shira Plateau is one of the most picturesque and interesting places on Kilimanjaro. Depending on weather conditions, you can drive four-wheelers up to an altitude of 4,000 meters. But a quick ascent by car will affect the acclimatization. The Shira route is only offered to hikers who have already acclimatized to 4000m by hiking Mt. Meru or Mt. Kenya a few days before climbing Kilimanjaro.

The Umbwe route is known for its caves. The first night you sleep in the Umbwe Cave Camp. Two more caves can be visited on the way the next day. The Umbwe route is one of the shortest routes to the southern glaciers and the western gorge. This route carries certain dangers.

It is used only as a descent for all western routes. 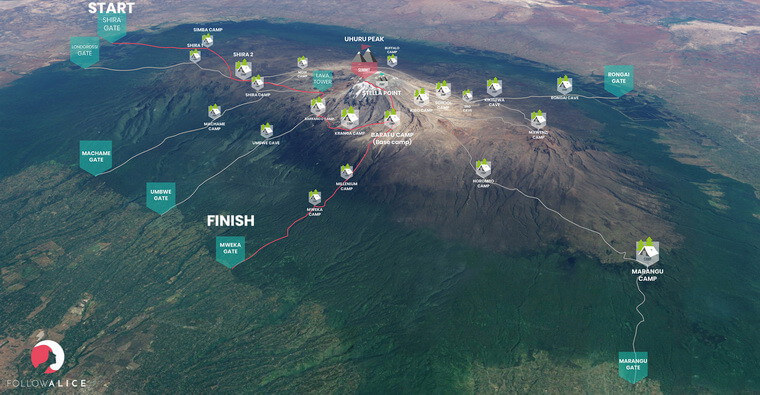