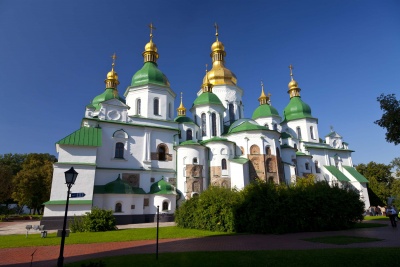 St. Sophia Cathedral – the cathedral temple of the Kiev Metropolitan Church from the 11th century, one of the most famous shrines of Rus. World famous masterpiece of medieval Christian culture and art.

In 1990 St Sophia Cathedral, as well as Kiev Pechersk Lavra, became the first UNESCO World Heritage Site on the territory of Ukraine.

Since the building of the cathedral is a part of the National Reserve Sophia of Kyiv and was included into the UNESCO World Heritage List, it is prohibited to transfer it to any religious organization and hold services there. The only exception is the day of August 24 – Independence Day of Ukraine – when representatives of religious organizations make a prayer for Ukraine (it was introduced in 2005). On November 22, 2006 the Holy Synod of the Ukrainian Orthodox Church (Moscow Patriarchate) declared that it was impossible for them to participate in such events.

The idea to build in Kiev “the Church of St. Sophia, the Metropolia,” according to Metropolitan Hilarion, belonged to Vladimir Sviatoslavich, but Yaroslav the Wise had already had to carry it out. The date of the basis of the cathedral more than one and a half centuries is a subject for scientific discussion. Considering all historical circumstances the most probable years of building should be considered 1032-37. – Exactly 500 years after St. Sophia of Constantinople which was a symbolic model for the Kiev temple. 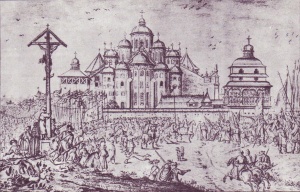 According to the ancient church tradition, St. Sophia of Kiev was laid by metropolitan John and was consecrated by his successor Theopemptus. Unknown architects were representatives of the capital Constantinople school of architecture. The temple is dedicated to Sophia, the Wisdom of God. It is one of the most complex abstract categories of Christian theology, which has many interpretations. According to St. Paul, Sophia symbolically corresponds to the hypostasis of Christ – the incarnate Word of God. Only later when the identification of Sophia with the Mother of God was spread, the temple feast of the cathedral of Kiev was transferred to September 8 (21) – the day of the Nativity of the Theotokos. The artistic image of the cathedral of Sophia was to embody the multifaceted meaning of this symbol. This explains its grandiose size and extremely complicated structure. Generally, the interior of Sophia reproduces the medieval model of the universe and its external appearance is an image of the City of God – the heavenly Jerusalem.

Like other temples, Sofia was a burial place of outstanding personalities, mainly of the wealthy. The necropolis of the Sofia cathedral began to form in the middle of the XI century. While he was still alive the founder of the temple ordered to equip for himself a tomb in the northern gallery. The sarcophagus of Yaroslav the Wise is kept in the cathedral up to now. According to the annals, four more burial places of princes – Yaroslav`s descendants, and also burial places of many Kiev metropolitans are known in Sofia.

During the pre-Mongolian time, St. Sophia’s Cathedral was looted twice. First time it was done by the troops of Andrey Bogolyubsky and his allies in 1169 and second time by the troops of Rurik Rostislavovich in 1203.

The greatest damage to St. Sophia and St. Sophia Metochion suffered during the Mongol invasion of 1240, as well as during the Tatar raids of 1416 and 1482. However the temple was not destroyed and continued to operate. As early as 1273 Metropolitan Cyril summoned here a local council of the Russian Church. And although after 1300 metropolitans of Kiev less and less frequently visited their devastated residence, some restoration work did take place from time to time. In particular, in 1376-78 Metropolitan Cyprian carried out repairs of Sofia, and around 1577 the metropolitan’s vicar Bogush Gulkevich-Glebovsky. 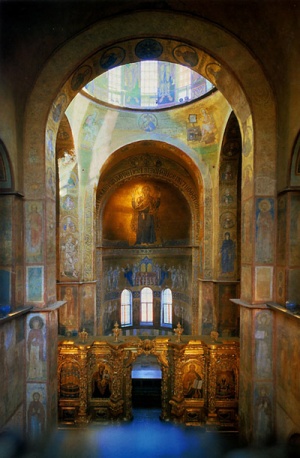 Despite these efforts, the temple gradually fell into decay. It was mainly due to the indifference and selfishness of the Metropolitan’s officials. At the end of the 16th century St. Sophia was such a dismal sight that even the Catholic bishop Joseph of Vereshchynsk resented it. In 1608. The Unites took possession of the cathedral and continued to steal construction materials, particularly the roof. The rains and winds did the rest.

On July 2, 1633 the newly elected Orthodox metropolitan Peter Mohyla released the St Sophia cathedral from the Unites and founded a monastery in it. The capital restoration of the temple began in 1634, but during the life of Mohyla it was not completed. In particular, the western gallery remained half-destroyed. In 1637-38, the work was supervised by the Italian architect Octaviano Mancini. Apparently, it was he who gave the facades of the cathedral a Renaissance character known to us from a drawing by Abraham van Westerfeld in 1651. At the same time a new carved iconostasis and two aisles of the altar in the outer galleries were built.

Since 1688 Metropolitan Gedeon Svyatopolk-Chetvertinsky began a new, more voluminous rebuilding of St Sophia, on the donations of the Moscow tsars. At that time the upper stories above the outer galleries, six new domes and eight baroque pediments were built, which concealed the original small domes. The work was supervised by Savva Yakovlev, an apprentice in stone affairs. They were completed by 1695, as evidenced by the image on the plan of Ushakov.

The newly built cathedral was badly damaged by the fire of 1697 and needed a new restoration. In 1699-1706, it was carried out by Metropolitan Varlaam Yasinsky on money of Hetman Ivan Mazepa. Exactly at that time ancient mosaics and frescos were whitewashed, the remains of the Western gallery and Western triple arcade with a part of the choir were dismantled, the building was reinforced by powerful buttresses from all sides.

In 1718-24 new baroque mural painting was executed, in 1739-47 metropolitan Raphael Zaborovsky made next restoration of the cathedral, and in 1747-54 a three-tier iconostasis was built, the lower tier of which is preserved till now. At the beginning of the XIX century the cathedral had 17 altars.

The beginning of the scientific study of Sophia of Kiev began with the book of metropolitan Evgeniy Bolhovitinov “Description of Kiev Sophia Cathedral”, published in 1825, At the same time with the barbaric “renovation” of the mural, the architect Pavel Sparro performed a fundamental repair of the temple, during which the roof was replaced, the floor was paved with cast iron plates, and the upper tier of the iconostasis, which prevented seeing the mosaics of the altar, was removed.

During the last reconstruction, carried out in 1882-89 under the direction of Vladimir Nikolaev, dismantled part of the Baroque gables and opened the ancient small domes. The cruciform window in the center of the west facade was removed, and the present narthex in the pseudo-Byzantine style was built in place of the west gallery. At the same time under the floor of the cathedral the channels of calorifer heating were tripled and one more tier of iconostasis was removed.

In October 1921 a council was held in St Sophia Cathedral, which announced the creation of the Ukrainian Autocephalous Orthodox Church. St. Sophia belonged to the UAOC until its liquidation in 1930. In 1934, the divine service was discontinued in the cathedral and the State Architectural and Historical Reserve Sophia Museum was founded. The activity of the sanctuary began with vandalism: during 1935-37 eight baroque iconostases of side altars made by Ukrainian masters of XVII-XVIII centuries were disassembled and mostly burnt. The silver gilded Royal Gates of 1747 from the main iconostasis also disappeared. At the same time, creation of the reserve for the first time allowed to carry out researches and restorations of the monument on a really scientific basis.

According to the former head of the Sofia Reserve Alexei Povstenko, in September 1941 the Soviet military made an attempt to mine the temple, but fortunately it was unsuccessful. In the postwar years, St. Sophia Cathedral is regularly restored and studied. Its rooms maintain a microclimate favorable to the preservation of priceless works of medieval art.

In 1990 St Sophia Cathedral, as well as Kiev Pechersk Lavra, became the first UNESCO World Heritage Site on the territory of Ukraine.

Kiev Sophia Cathedral was one of the largest buildings of its time. The total width of the temple is 54.6 meters, its length is 41.7 meters, the height to the zenith of the central dome is 28.6 meters. The cathedral has five aisles finished with apses on the east, topped with 13 domes forming a pyramidal silhouette, and surrounded on three sides by two rows of open galleries, of which the inner one has two tiers. For a long time it was believed that the galleries were added to the cathedral later, but recent research has proved that they were connected to it by a single concept and appeared at the same time. Only the baptistery, built in the western gallery, dates back to the middle of the XII century. 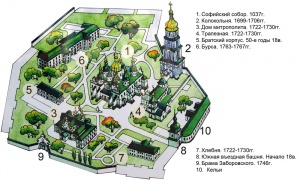 The spatial solution of the central core is cross-dome. It is surrounded on three sides by extremely spacious gallery opening into the temple by triple arcades. Apparently, choirs were intended not only for princely family during liturgy, but also to house basic establishments of Kyiv Metropolis: a chamber for solemn events, library with a scriptorium (a workshop for making handwritten books), an office, a treasury. Two towers with spiral staircases were built in the western gallery to ascend the gallery.

Sophia Cathedral of Kiev is a perfect example of the synthesis of arts. The mural painting and decorations are an indivisible whole with the architecture of the temple. In the Kiev cathedral the unusual combination in one interior of mosaics and frescoes is used. In doing so, mosaic images cover only the most important parts of the temple – the main altar and the central dome, the rest of the interior is decorated with frescoes. Remains of frescoes are also found on the facades – in niches and on the pillars of the galleries.

The floor in the chancel and the central part (chorus) was laid with slate slabs inlaid with mosaics, and in other parts with ceramic tiles. Many elements of decoration were carved from imported Greek marble. Marble were used for the thresholds and columns, the low prelateral railing-temple and the canopy-kivori above the throne. Slate parapets of the fence of the choir were covered with carved ornaments.

An outstanding historical source is a set of graffiti inscriptions scratched on the walls of the cathedral by its visitors over the centuries. Among them there are autographs of famous historical figures of medieval Russia. 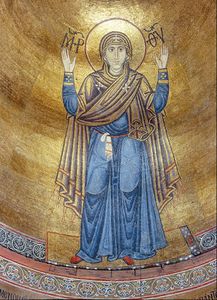 How to get to St. Sophia Cathedral in Kiev:

1) Take the subway to the “Golden Gate” station, go down to St. Sophia Square along Volodymyrska Street.

Since the cathedral building is part of the Sofia Kyivska National Reserve and is listed as a UNESCO World Heritage Site, it is forbidden to be given to any religious organization and to hold services in it.

However, as before Sofia Kyivskaia attracts an endless stream of pilgrims and tourists from all over Ukraine and other countries. Every year about two million people visit the Sofia Kyivska Reserve to admire the beautiful creation of world culture.