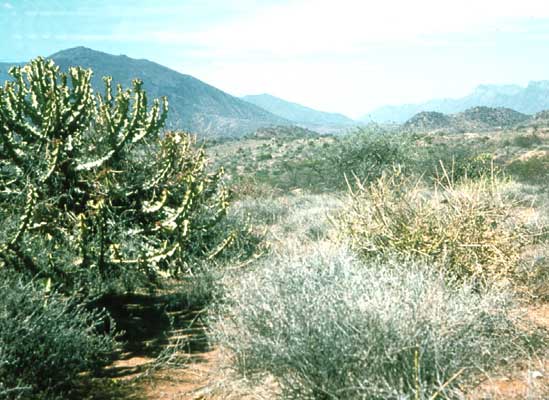 Terrain. Kenya lies on the north-eastern edge of the East African Plateau, with heights ranging from 500 m in the east to 1,500 m in the west. The Indian Ocean coastline is rugged, sparsely dissected, and for the most part precipitous. There are few natural suitable harbors. Along the coast of the ocean stretches accumulative lowland, 50 km wide in the south, to 200 km in the north. Ancient leveled, in some places hilly plateaus (Ucamba, Kitui, Machakos and Kajiado) are stepped down towards it. The central part of the plateau is strongly dissected by the meridional branch of tectonic fractures, expressed in the relief of the depression (Gregory rift). Volcanoes rise from the bottom of the depression (Longonot, 2777 m); there are outcrops of thermal springs and gases. Along the edges the hollow is flanked by high mountain ranges (Aberdeer in the east, up to 4,000 m high; Mau and Elgeyo in the west, up to 3,000 m high) and extinct volcanoes (Mount Kenya, 5,199 m – the highest point in the country, etc.). The western part of the country is a high plateau with residual mountains; a narrow accumulative lowland extends along the shore of Lake Victoria.

Geological Structure and Minerals. On the territory of K. In the west (near Lake Victoria), the Archean complexes of the Tanganyika Shield (massif) are exposed, in the central part, the Archean Proterozoic complexes of the movable Mozambique fold belt and Cenozoic volcanic formations of the East African Rift System are spread, In the east, vast areas are covered with Neogene-Quaternary sediments of the coastal plain, from under which in the extreme south-east the Permo-Triassic and Jurassic-Paleogene deposits of the pericontinental trough emerge.

The mineral base of the country is poorly explored and is based on non-metallic minerals. The Kremlin has very large reserves of soda and table salt (Lake Magadi) and kyanite (Murka Hill deposit in the south). Total reserves (1981) of fluorite ores are 11 million tonnes (Eldoret District in the west), diatomite – 10 million tonnes (Seisambu and Coriantus deposits), niobium ores and rare earths of cerium group – 350 thousand and 700 thousand tonnes, respectively (Mrima deposit). Other types of minerals are represented by small deposits of iron ores (Kisii, Homa), nickel (Talot), gold (Ngiga and others), lead-silver ores (Kinagoni Hill). There are also poorly explored deposits of non-metallic building materials, precious stones, etc.

Kenya’s climate is subequatorial and relatively mild. Near the equator, there are two rainy seasons (March-April, November-December); in the north and south, there is summer rainfall (Northern and Southern Hemisphere). Average July temperatures are 24-25°C on the coast, 12-15°C in the central highlands, and 22°C in the west; January temperatures are 27°C, 14-18°C and 24°C, respectively. Daily temperature fluctuations are high on the plateaus and there is a well-defined climate belt in the mountains (from equatorial to nival belt at Kenya and Elgon volcanoes). Annual precipitation increases from north-east to south-west and west from 250 mm or less to 1500-2000 mm.

Inland waters. The river network is poorly developed, especially in the north and northeast. Rivers are low-water, for the most part not navigable, in the north and northeast seasonal or episodic. The largest rivers Tana and Galana belong to the Indian Ocean basin. Short rivers (the Nzoia and others), which flow into Lake Victoria, have a more even flow in the seasons. In the central K. graben is an area of inland flow to lakes Rudolph, Baringo, Nakuru, Naivasha, and Magadi. Some of the lakes are saline.

Soils. In the east and northeast of the country developed brown-red lateritized soils, stony, poorly fertile, often saline. In the north-west and south-east, there are red-brown soils, while in the mountains there are red-mountain soils. Along the shores of Lake Victoria there are meadow-red-brown soils and black and grey soils of the Indian Ocean.

Vegetation. In the dry north and northeast of the country thorny forests and bushes, leafless in drought, and xerophilous woodlands of Ethiopian type predominate. They are succeeded by deserted savannahs with sparse grass cover, stretching from northeast to southeast and occupying about 2/3 of the country. Deserted savannah is locally called “nyika”; it is especially characteristic of the rift valleys. In the western, most humid part of K. are high grass savannahs and park forests. In the central part of K. in the mountains – typical evergreen humid tropical forests, almost devoid of undergrowth and lianas. Many evergreen deciduous species (Rausonia, Drippetis, Elacedendron, Croton) have valuable ornamental wood. In coniferous mountain tropical forests, slender juniper and podocarpus dominate. On the coast, mixed deciduous evergreen humid tropical forests and mangroves, occupying about 3% of the country.