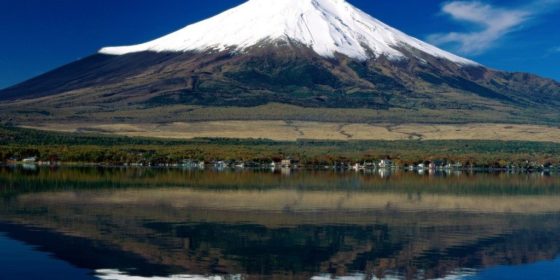 In ancient times, the tribes living at the foot of Mount Kilimanjaro never saw snow, so they were convinced that the top of the volcano is covered with silver. But it took a long time to test this hypothesis, because a great many myths were associated with the mountain, telling of the demons that lived at the top, guarding the treasures.

One day a local chief made up his mind and sent some warriors on a reconnaissance mission. When they got to the top, they immediately grabbed the silver in their hands, and it melted. And then the natives, feeling the cold of the volcano’s silver cap, called it “The Abode of the God of Cold” and used this name no less frequently than the previous one – “Kilimanjaro” or “Sparkling Mountain”.

The highest point of the African continent

Kilimanjaro volcano is so huge that it is 5,899 m high, 97 km long and 64 km wide. The highest mountain on the African continent is located at a slight distance from the main East African ridge, which stretches from east to west through the northern part of Tanzania. Mount Kilimanjaro is located just on the border between this country and Kenya, and it can be found on the map at the following geographic coordinates 3 ° 4′ 32″ (3 ° 4′ 54) south latitude and 37 ° 21′ 11″ (37 ° 21′ 19) east longitude. 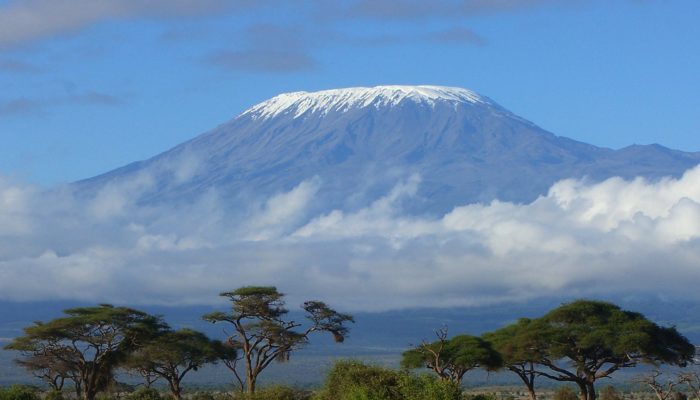 Although the active volcanic activity of Kilimanjaro is nowhere officially documented, there is evidence that the last major eruption occurred fairly recently – about two centuries ago. Currently, the mountain is considered albeit active, but inactive volcano, which at any time may become active. At the top recently recorded emissions of sulfur and greenhouse gas, and studies have shown that the lava is some four hundred meters from the Earth’s surface, under the Uhuru Peak.

Africa’s tallest mountain was formed more than a million years ago due to excessive volcanic activity and has a rather distinctive shape: its sloping slopes rise to an elongated flat summit. It consists of three separate volcanoes that were once united into one.

The oldest volcano Shira is located on the west side, and at the foot there is a fairly flat plateau with an area of 6.2 hectares. Today, the height of the Shira is 3,810 meters above sea level, while in earlier times, it was much higher and was destroyed during a violent eruption.

Located on the eastern side and is now a peak with a height of 5334 meters. From the west Mawenzi abruptly drops a complex of rocks and gorges, and the height of the volcano from the east side is little more than a kilometer.

At the base of the mountain you can see deep radial valleys. And between it and Kibo is the largest highland treeless area of the African continent, the huge Saddle Plateau, which covers more than 3,500 hectares.

Kibo is the youngest volcano (it is considered to be the active and the most dangerous of the three) and was formed during several extremely strong eruptions in a row, resulting in a caldera 2.4 km wide and 3.6 km long. During the next eruptive event a single cratered volcanic cone with a diameter of 900 m was formed, followed by a 200 m diameter ash cone that formed in the middle of the crater. 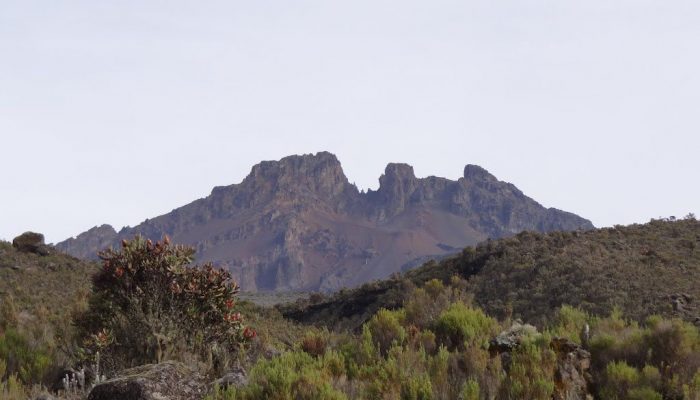 Over time the Kibo caldera formed a flat, snowy peak on Kilimanjaro (this despite the fact that according to the coordinates of the mountain, it is only a few degrees south of the equator). Snow can be seen not only at the top of the mountain, but also on its upper northern and southern slopes. There is also Uhuru Peak, which is 5,895 meters high and is the highest point on the African continent.

The enormous size of the volcano allows it to not only actively influence, but also shape the climate around it. Wet air masses from the Indian Ocean move toward the huge mountain. When they encounter the volcano, they crash and are forced to give up all the moisture they have in the form of rain or snow ahead of time. At the foot of the mountain the rainfall is much less than on the slopes:

Thus, near Kilimanjaro, there is a lot of precipitation, which has a positive effect on the local vegetation (especially at the foot of the mountain). Small streams and rivers formed by melting snow and precipitation at the top of the mountain and flowing down carry the life-giving moisture down to the pastures and fields. 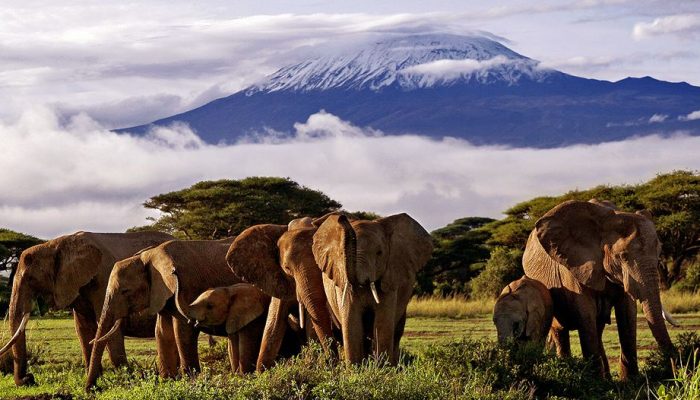 They also fill the two major rivers in the region. At the same time 90% of precipitation does not leave the mountains (they are held up by the forest), and, having saturated the soil, most of the water (2/3) evaporates and returns to the atmosphere. Recently, the amount of precipitation is gradually decreasing, which is one of the reasons for the reduction of snow cover.

Flora and fauna of Kilimanjaro

The climate of the highest volcano in the world is unique, because due to the fact that the mountain is very close to the equator, and on top Kilimanjaro reigns in winter, a person climbing up passes absolutely all the climatic zones of the planet (a total of seven), each of which is characterized by its own flora and fauna.

In the foothills of Mount Kilimanjaro, Africans actively grow maize, beans, peanuts, sunflowers, rice, coffee and corn. There are also sugar and banana plantations. The land here is abundantly covered with grassy vegetation, shrubs and a few stunted trees, characteristic of the savanna. Monkeys, leopards, servals and honey-eaters are not uncommon here.

This area of the mountain is densely populated (500 people/km2). Members of the Chagga tribe have built a network of irrigation canals here, and grow banana trees, graze cattle, and keep apiaries.

The natural resources (mainly foothill and mountain forests) are used very irrationally by the Aborigines: many trees were cut down for arable land and left for fuel. Trees grow only in ravines or gorges. 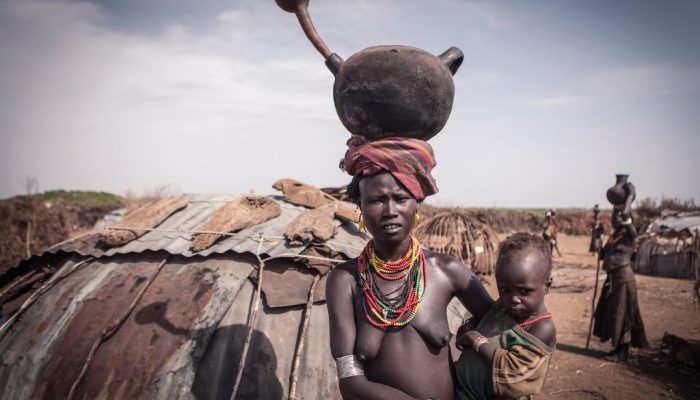 Here locals are also actively cutting forests for timber and fuel. There are also a lot of forest plantations – huge plantations of cypresses, eucalyptus, pine trees, and in their shade they grow vegetable crops, and in the meadows and near the ponds they graze the cattle.

The soil is sparse, poor, clayey. From this altitude begins the zone of mountain forests, there is a maximum rainfall of about 2 thousand mm per year, and temperatures range from 20°C to 28°C. At altitudes above 2.4 thousand meters, there is often a thick layer of clouds, which are another important and additional source of moisture.

At an altitude of about three thousand meters the tropical forest gradually disappears, but alpine heather shrubs appear. The soil becomes porous, so it is well penetrated by water, precipitation is low (760 to 1 thousand mm) – so a huge number of cereals and bulbs can be found here.

On the slopes of the mountain at an altitude of 3 to 4 thousand meters you can often see mountain swamps and meadows covered with bright colors. At such altitudes live giraffes, elephants, lions, and some species of rodents.

Arid high-mountainous desert with little precipitation (about 200 mm a year) and little vegetation. Daily temperature difference is about 40°C. The air at this altitude is thin, with very strong solar radiation.

Even higher at the top of Kibo begins the snow, cold stone and eternal ice, covering the mountain top for 11 thousand years after the end of the ice age. There are several glaciers in this area, each with its own name and thickness (this is primarily due to the fact that precipitation falls unevenly).

It is the snows of Mt. Kibo that have recently attracted the attention of researchers. The fact is that they are melting – and doing so extremely quickly: over the past century, according to scientists, the snow cover has decreased by 80%. 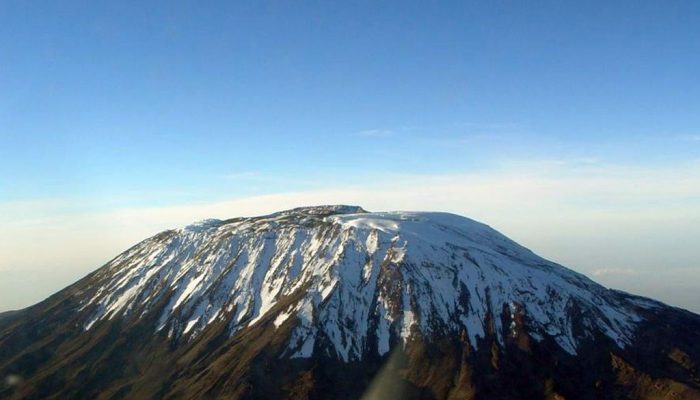 The figures they cite are impressive: at the beginning of the XXI century the area occupied by snow was 2 square kilometers, while a hundred years ago the figure was 12.1 square kilometers. In the second half of the XX century, the thickness of the snow cover has decreased by an average of 17 meters and, apparently, continues to thaw actively. Many experts predict that in the near future the snow on Kilimanjaro may disappear altogether.

It is believed that this situation is not so much caused by changes in temperature, but the active work with deforestation, which reduced the amount of water vapor, which rise to the sky and fall on top of Kibo.

Another reason for the catastrophically rapid snowmelt is the volcano itself: its dark-colored volcanic rocks absorb heat and heat the glaciers from below, causing the glaciers to melt and collapse, freeing the surface from snow and thus increasing the area capable of absorbing the sun’s rays.

The best time to hike

To climb the mountain experienced tourists are advised from December to March, when there is no period of rain, and the air temperature is optimal for humans – about 28-30 degrees. Despite the fact that the experienced climber is able to climb in less than a day, many people need adaptation to get used to the climate and avoid mountain sickness. This is why the hike to the top usually takes five to seven days.

The first Europeans climbed to the top of the highest mountain in Africa only in 1889. It is noteworthy that when a hundred years later celebrated the anniversary of this event, the guest of honor on the occasion was the very guide who accompanied the white men during the ascent – at that time he was 18 years old.

Nowadays, it is possible to climb Kilimanjaro only from Tanzania – there are special agreements on this matter between this country and Kenya, so Kenyans do not even have a developed infrastructure in this direction, and along the mountain there are police posts, which ensure that there are no unauthorized climbs.

Mountains, their characteristics and classification 10016 4.67 0

At the same time, the territory of Kilimanjaro in Tanzania was given the status of a national park and was inscribed on the list of UNESCO. For tourists specially designed six different complexity of the routes, so almost anyone can climb despite the huge height, for example, Bernard Goosen, being in a wheelchair, did it as many as two times. 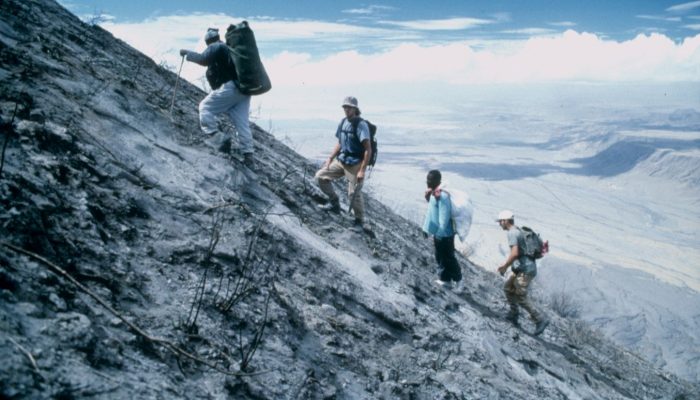 Another good thing about climbing the mountain is that it can be done light: there is a unique service from locals – for five dollars a day they will carry luggage up to the top, while holding it on his head.

View from the summit

Despite the ease of climbing, only 40 percent of the climbers who start climbing reach the summit. The scenery before the tourists who have climbed the mountain is magnificent: below, under their feet, there are clouds, and around the volcano, illuminated by the gentle rays of the bright daylight, there is a vast savannah, golden desert sands and untouched nature.