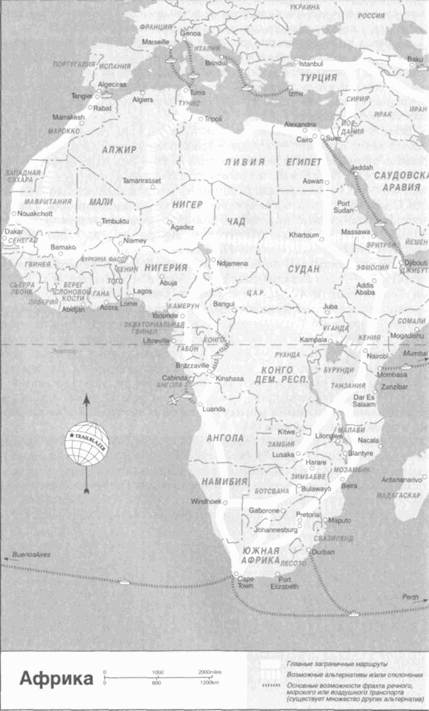 All circumnavigators would agree that Africa represents the ultimate destination in overland travel. The combination of desert, jungle, unstable politics and crumbling infrastructure along with the diversity and vitality of its peoples make a trip to Africa unforgettable, even if not all experiences are pleasant.

The vitality possessed by many of the poorest nations is something that will make you question the social significance of wealth. Add the stamina it takes to traverse the tracks of the Sahara or the flooded canals of the Congo basin, and you’ve got an experience that makes your mood very volatile, just like a gibbon on payday.

Morocco, north of the Sahara, is easily accessible from Europe, a country that offers a great introduction to Africa plus an unforgettable experience in the south. West Africa also offers a fabulous opportunity to get to know the continent; this part of the country will require more expense than Morocco, but it is not far to reach by sea from Europe or even from the east coast of the United States. Mali, a country only twice the size of Texas, is a favorite among regions; here you can plow dusty country roads and explore villages of clay huts in peace for three months. The Sahara is now paved all along the Atlantic route-how boring is that! Much more interesting are the routes lying in the middle of the desert: mostly Algeria, Libya and Niger.

At the other end of the continent, South Africa provides an opportunity to explore the states, albeit not the most presentable, to the north. These are mostly the eastern states of Tanzania, Kenya and Uganda, where you can endlessly admire the African plains and the famous nature reserves. You can get to know southern Africa pretty well without venturing inland, but of course, nothing can give you such a thrill and present a fuller picture of Africa than a trip across the continent.

READ
Stromboli, Italy: where to go, when to go and what to see

When crossing Africa from the north, departure times depend on two factors: the summer in the Sahara and the equatorial rainy season. The first (from April to October) adds to the motorcyclist’s troubles because you have to carry a large supply of drinking water. Don’t even think about leaving the main routes in the summer (see table on page 206).

The rains in Central Africa (up to ten months a year) make it impossible to travel along the equator except along the rivers from June to September, which is only slightly better from February to April. Further south, a network of paved roads makes the rains in South Africa from November to April not so terrible.

If you want to cross the continent from Europe with as few problems as possible, head out around October or November to make it through the winter in the Sahara and the dry season in Central Africa.

The main routes across the continent

When one reads books about travel in Africa fifty years ago, one gets the impression that it was a “golden time. Border posts welcomed European travelers as they traveled from the French-controlled Sahara to the British-controlled Sahara.

Today, traveling in Africa is a risky venture, and it is not at all surprising if you change your route the night before you leave because a new danger zone has emerged. Political instability tends to arise quickly and fade slowly, while the lack of laws in remote areas of supposedly stable countries is also a threat to foreigners. From time to time some intrepid madman manages to cross a seemingly hopeless country without any problems, word gets around, others follow suit, and that’s when disaster strikes. The unpredictable nature and the lack of a logically easy way to get from one end of Africa to the other make this journey so extreme.

As long as entry was possible, the best way to get to know Africa was to travel from the Mediterranean Sea to South Africa: traditionally the destination was the outermost point of the Cape of Good Hope. This route is usually 10,000 kilometers long, and the journey takes at least two months.

Leaving Europe, drivers immediately encounter their first obstacle: the political and geographical turmoil of the Sahara, a desert the size of America or Australia. It’s very easy to cross by the Atlantic route to West Africa, a region where you can travel without a customs travel license (they have their own regional version). From there you can work out a route through Cameroon and the wild republics of Central Africa such as Gabon, Congo Brazzaville, and especially the Democratic Republic of Congo (DRC, formerly Zaire). If you reach Angola, you can also reach Namibia, where the real challenges for Cape travelers end.

The next of the main routes runs from Cairo through Sudan and Ethiopia to Kenya and then south. Until 2003, the two routes intersected in Chad until the Darfur crisis broke out in Sudan. It is still turbulent here, although peace was concluded in early 2005, ending the long civil war in South Sudan.

If indeed the situation before Darfur stabilizes, a route through South Sudan and the Central African Republic and even the northeastern DRC, the old overland route of the 1980s, could pass through here.

This trip Western Sahara and Morocco

Favorite place Dhara, next to the ocean.

Biggest mistake Too much luggage

Pleasant surprise People and the beauty of the Sahara

Weak point of the bike Suspension

Tip Stop and talk to people

This trip From Tunisia to Niger and Benin

Best day From Hoggar and to Tarn

Worst day In the dunes

Favorite place No doubt about it, Teneret.

Cost of the trip Approximately $25 a day

Other planned rides Across the U.S. through provincial towns

Modifications GPS, bags hinged on the sides of the trunk

Weakness of the bike First gear too high for sand, economy

Strength Strength and handling at speed

Problems with the bike True, none

Tip Get off the road

North Africa and the Sahara

North Africa and the Sahara Easily accessible from Europe, North Africa conveys the flavor of a Muslim continent so different from the southern Sahara. Since the last edition of this book, Algeria has become more open and then slammed its doors again after the massive

West Africa West Africa includes the region south of the Sahara, from Senegal to Cameroon. Much of this territory was formerly a French colony, and today French and, to a lesser extent, English (in the Gambia, Sierra Leone, Liberia, Ghana, and