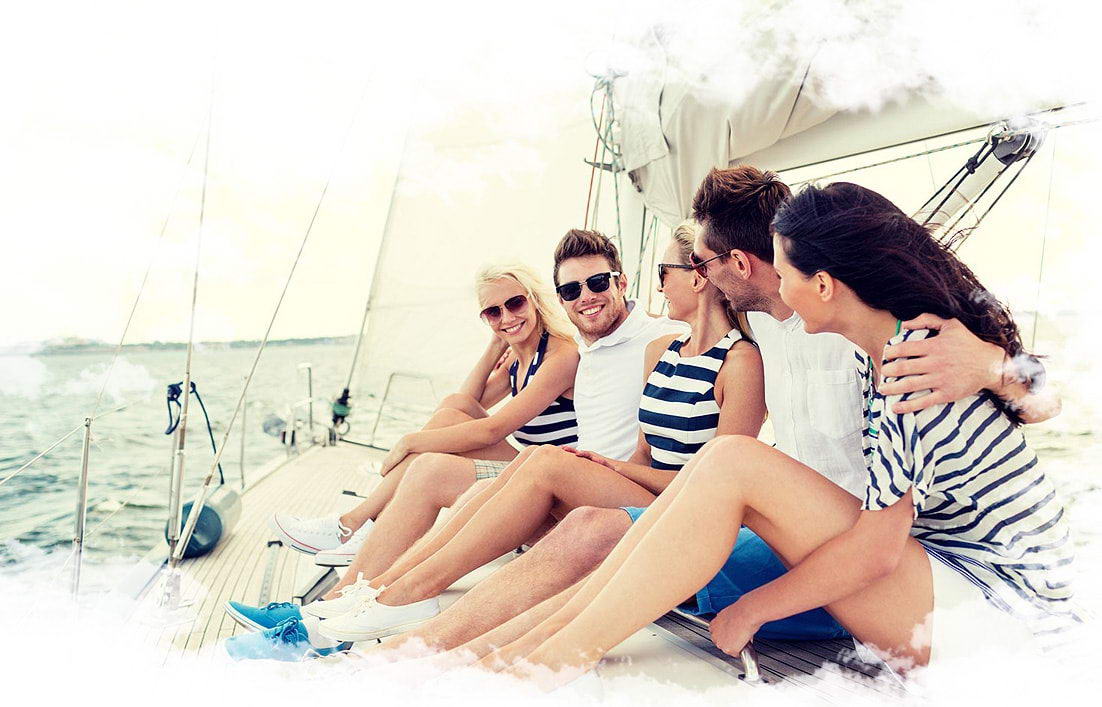 Cost of the trip

What will be on the trip: 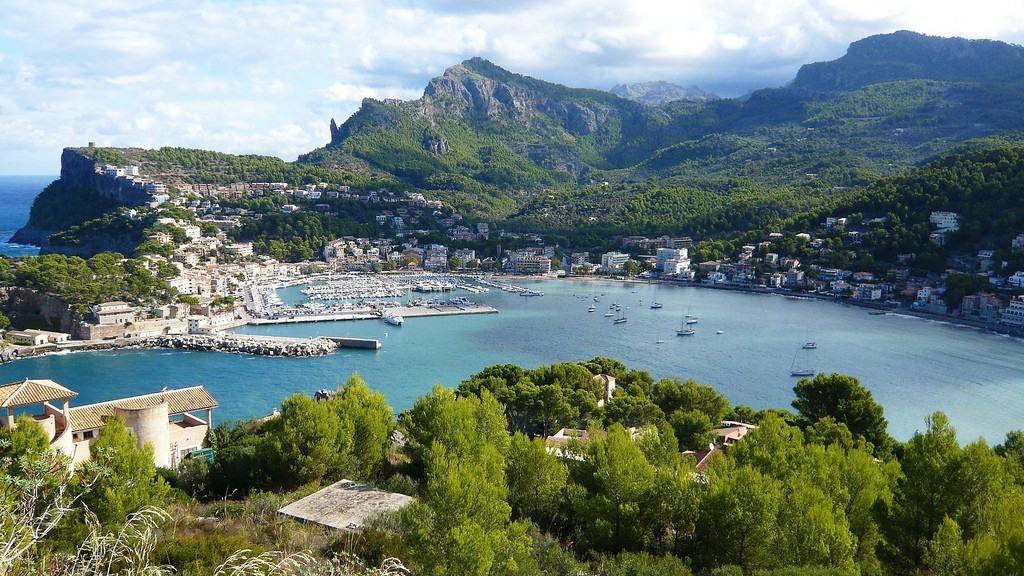 Your sailing itinerary starts in Palma de Mallorca. For lovers of history and architecture, we recommend taking a stroll the night before through the streets of the capital of the Balearic Islands, visiting the local bars with live music in the evenings and admiring the Gothic cathedral, which looks particularly impressive in the night lights.

Palma de Mallorca is the capital and most beautiful city of the Balearic Islands. The history and culture of many peoples and civilizations are intertwined in this city. Two prominent buildings in the town are the Belver Castle and the Cathedral, which towers over Palma’s old harbor. Next to the Cathedral, is the palace of Almudaina, once an Arab fortress and home to the kings of Mallorca.

It is now the residence of the kings of Mallorca and serves as the official reception of the Spanish kings during their stay on the island. Opposite the Moorish Palace of Palau de l’Almudeina is the beautiful building of the Stock Exchange, with high windows and tracery stone carvings from the 14th century. Walking in the old center of the city, you will meet the mansions of the local nobility in the heyday of crafts and trade. In the same area there are the Arab baths and the Arch of Almudaina, the church of Montention, the monastery of St. Francis and the Bishop’s Palace.

The streets of the historic center of Palma retain the typical medieval imprint: they are narrow and winding. In these streets here and there are surprises in the form of architectural treasures – houses formerly belonging to the nobility, as well as churches and monasteries, of which there are surprisingly many. In St. Eulalia Square, next to City Hall, is one of the oldest and largest churches in the city: the Church of Santa Eulalia (St. Eulalia).

A few steps from the Church of Sant’Eulalia, one of the first parishes founded after the conquest of the island by the Catalans in the thirteenth century, begins the Via Mori. It seems as if nothing has changed here in seven centuries. Many houses have old blown glass windows.

Early rise and crossing to Puerto de Andratx, hospitable fishing port located in a narrow bay. On the way we will pass by Cabo de Sa Mola and see the impressive cliffs that plunge steeply into the sea. We will stop for a swim and lunch on the island of Dragonera, then continue to Soller, where we will spend the night.

The port of Soller, a seaside corner of Mallorca steeped in French charm, will amaze you, above all, with its unusual detachment from all things Spanish. A trip on an old streetcar to the town of Soller, one of the jewels of Mallorca, sheltered from the outside world by the high mountains. The picturesque view of blossoming valleys and orange and almond groves impresses even the more experienced traveller.

In Soller, not only are the stations and tourist information points, signs and house numbers decorated like the old days, but all the buildings, some of which truly remember a time long since passed.

Wandering through the pretty, but very narrow streets of Soller, looking at a map of the tiny town, you must necessarily come to its most famous building, the so-called “Moon House”, surprising visitors not only with its 800-year age, but also perfectly preserved decoration of the facade – a full-faced image of the night light.

Seeing Soller, which has a special microclimate and filled with the scent of pine, you must visit the main religious shrine of the city, the cathedral, built by a student of genius architect Alexander Gaudi. 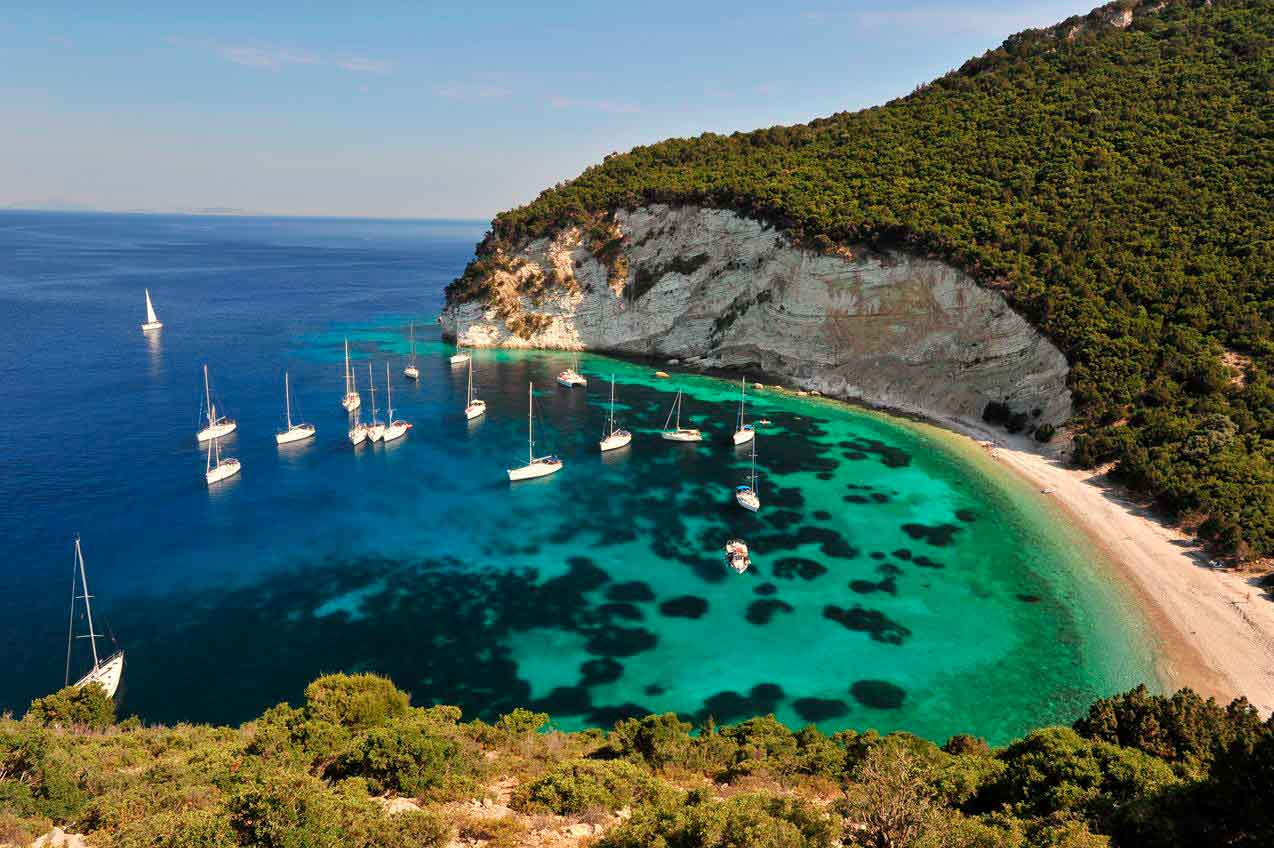 Puerto de Soller neighbors in the valley with the village of Fornalutx. The valley is famous for its orange groves and terraces with centuries-old olive trees. The valley is surrounded by the Serra de Tramuntana mountain range, which attracts hikers from all over the world.

After lunch we cross to Pollensa and spend the night there. 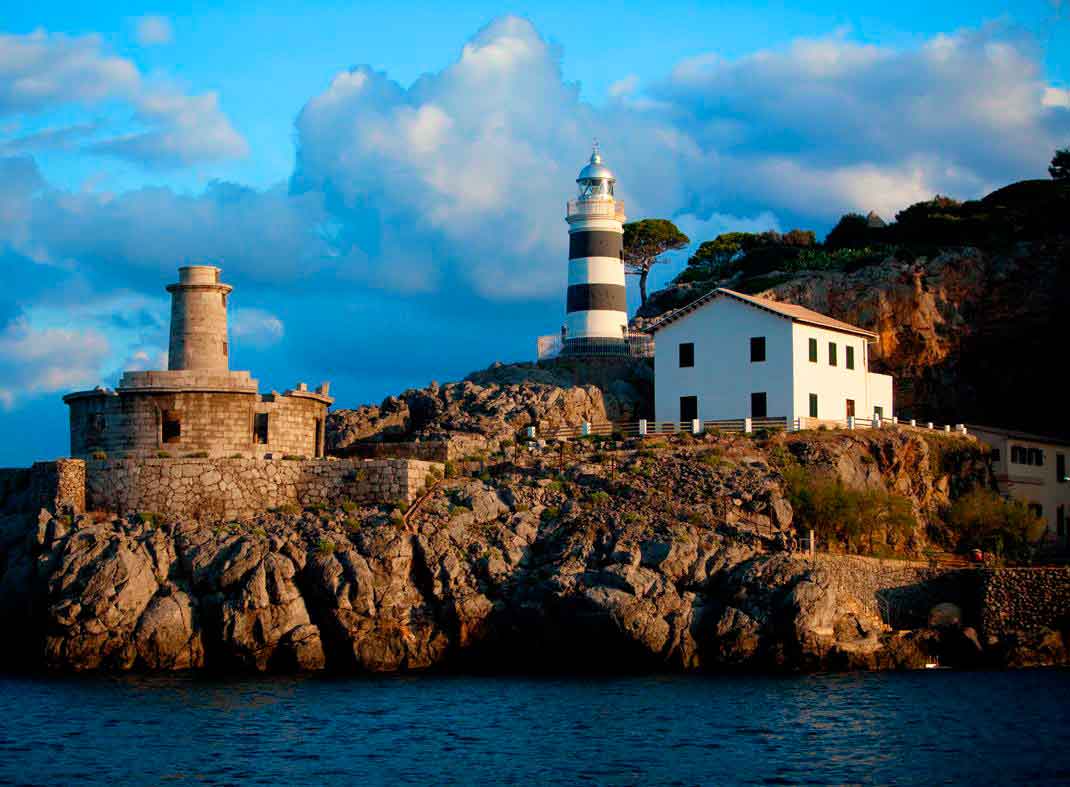 Pollensa, an old fishing port has now become a popular place among artists because of the beauty of the bay and the magnificent view from the cape Cap Formentor. After breakfast we cross the bay and walk to the most ancient city of the island, Alcudia, founded by the Phoenicians and once the capital of Mallorca.

The Ancient City of Alcudia: The ruins of the 13th century fortress that surrounded it are a unique historical monument.

The castle was once Mallorca’s main defender, repelling pirate raids. Today, visitors are welcomed on foot during the two-hour excursions to the old town: up to the fortress walls and then through the narrow streets among the solid and squat medieval houses of the 13th-14th centuries to the main sight, the Gothic-style Church of St. Jaume.

Crossing to Menorca and spending the night in the marina. It is worth waking up early to take a walk through the historic center of the coastal town of Ciutadella, which was the capital of Menorca from the Moorish era until the 18th century. The town’s town hall square has preserved palaces in Venetian style. The streets of this charming town are lined with fig trees and palm trees.

The church of Esglesia Catedral de Menorca is in Catalan Gothic style and predates the Turkish invasion. Adjacent to the church is the historic center of Ciudadela, the Plaza des Born, originally built as a training ground for Moorish troops and later rebuilt in Renaissance style. Today it is one of the most beautiful squares in Spain.

Around the square are many of Ciudadela’s architectural monuments: the city council building, the Teatre Municipal des Born, aristocratic mansions with Italian-style facades (Palau de Torre Saura, 19th century Palau de Torre Saura) and the Ces Voltes street with its rows of white arches on both sides.

Walk along Carre des Seminari and you will reach the church of Esglesia dels Socors and the Diocesan Museum. In the narrow streets of the old town there are many beautiful palaces, only one, the 19th century Palau Salort, is open to the public. Next to the palace is an Art Nouveau market building (1895). In the city there are many nice restaurants and a wonderful fish market.

Swimming in the bay of Cala Guya. The cove with a soft white sandy beach and silky, clear water of unusual colors with different shades.

Dragon Cave – the largest cave in Europe, which is also the largest underwater lake in the world – Lake Martelsee, a length of 177 meters. Cabrera Island is a tiny rocky island, only 4 miles long, was a pirate shelter in the past, and then became a prison during the Napoleonic Wars. Next to the port is a 14th-century pirate stronghold. In 1991, the island became a National Park because of its rich wildlife. It is the only mixed nature reserve in Spain that includes both land and sea. There is only one sandy beach on the shores of this magical group of islands opposite Mallorca’s south coast, on the east coast, but the lack of beaches is fully compensated by the beautiful, unspoiled nature and the incredible beauty of the coves. Overnight anchorage. 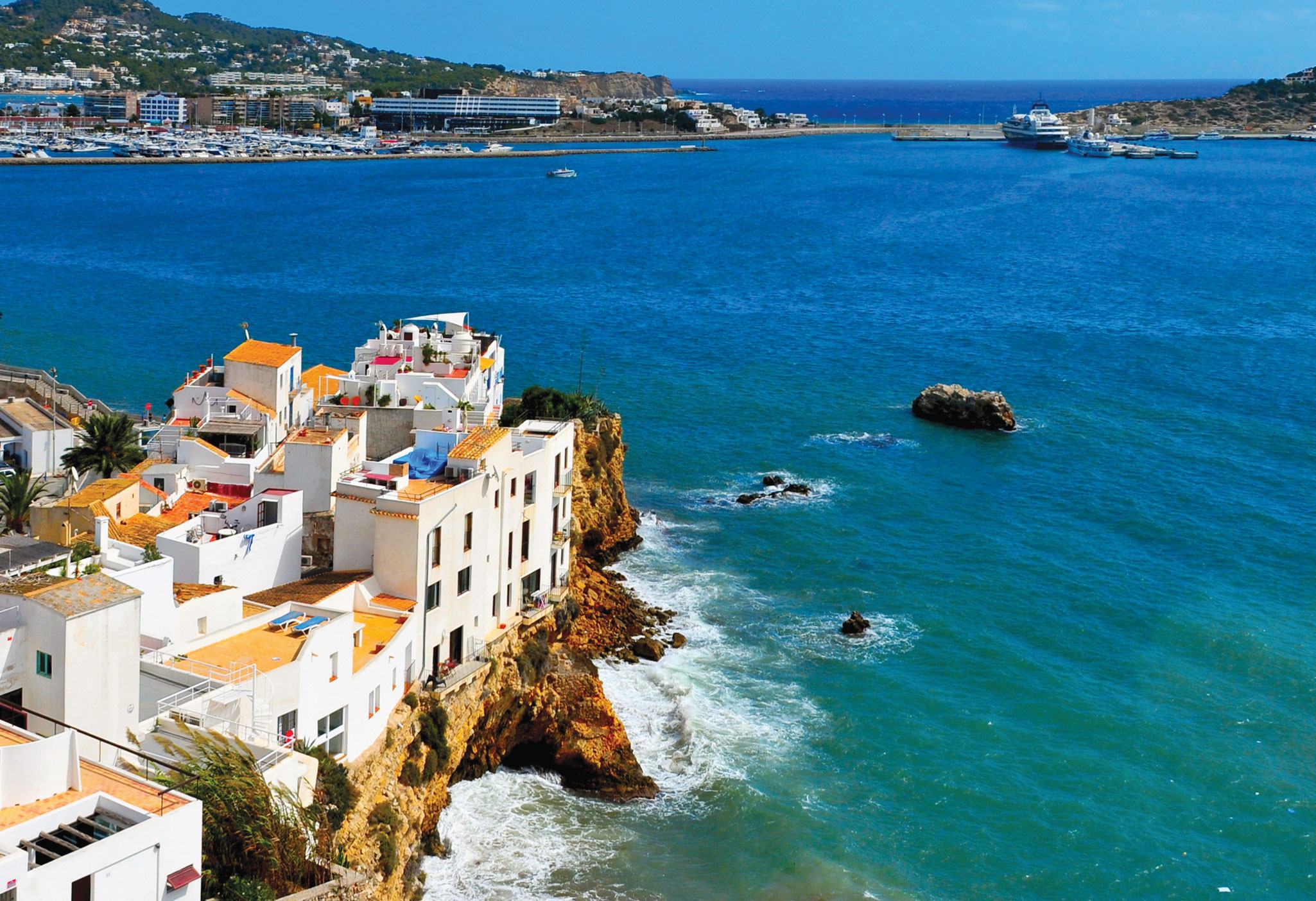 Passage to Palma de Mallorca, drop off the yachts, explore the city, and shop. Our yacht in Spain 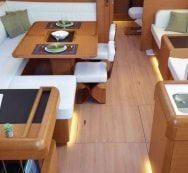 Comfortable kitchen with everything at your fingertips 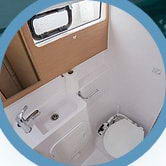 Perfect bathroom, you will feel at home 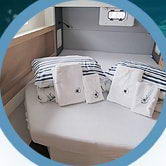 Unforgettable sweet dreams, where you will not get seasick on the waves of the boundless sea 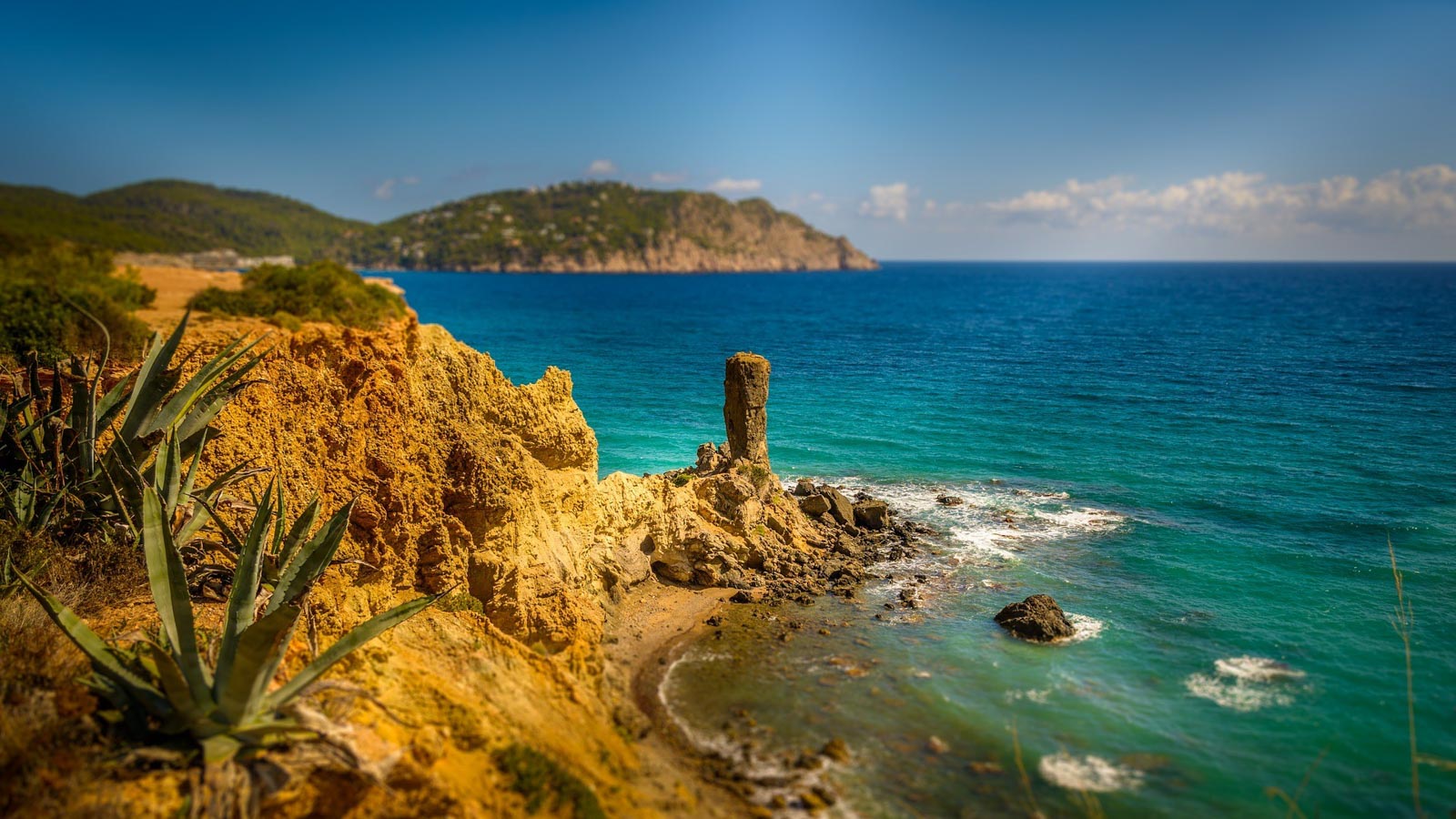 The Balearic Islands Program – An unforgettable journey on a sailing yacht through the Balearic Islands in Spain, the most famous of which are Ibiza and Mallorca. Apart from them we will visit Cabrera island, which is a national park, and Formentera, a quiet and cozy fishing island. The yachting season in the Balearic Islands starts in May and ends in October, when it is the height of the Velvet season and the temperature does not drop below 25 degrees in the daytime.

In the evening: walking through Palma.

Parking in the marina.

The capital of the archipelago, Palma de Mallorca, is a beautiful ancient town, especially its historical part. A true masterpiece recognized the Cathedral, which was built from XIV to XVII centuries. Walking around the historic part of the city will impress fans of history and architecture: Paseo del Born, the King and Queen Square, Grand Hotel, Boulevard Rambla, the theater and the bullring.

Training in the basics of sailing.

Cabrera is a small island with rocky shores and wildlife. In the past, the island was used by pirates, and during Napoleon’s time it was a prison. Near the port there is a pirate fortress of the 14th century. In 1991, the island became a Natural National Park, and a special permit is required to visit it. The sailing to Cabrera, across the bay of Cala Gandulf is very interesting and fascinating.

The crossing to the island of Ibiza (71 miles).

Weather permitting, on this day yachting enthusiasts will learn how to set, tune and set sail, practice making turns on the boat, learn to steer and learn the basics of nautical navigation. For the rest of us there is free time for sunbathing, swimming in the sea and rest.

The island is famous for its parties and is even called “Party Island”. But you should also come here for nature: a hilly landscape, pine forests, almond, olive and palm groves. In addition, Ibiza is famous for its history. In a magnificent ensemble, which is the Upper Town, collected everything that is worthy of the name “monument of antiquity.

READ
How to rest in the Czech Republic: information for tourists

The walls of the Upper Town date back to the Renaissance period. Built in the 16th century and subsequently reworked by Juan Baptiste Calvi, they have a perimeter of 1,931 meters and are up to 22 meters high. The main gate, the Portal de las Tables, is remarkable. Inside, the Armoury offers access to the squares and alleys of the Upper City.

For those who like to dance the most suitable atmosphere is in the entertainment center San Antonio or nightclubs: Amnesia, Pacha, Space, etc. These clubs are known throughout the world, they play the most famous DJ.

Passage to the island of Formentera (10 miles).

La Sabina de Formentera is an island close to Ibiza. Only its inhabitants prefer a quieter and more measured way of life. There are no loud celebrations and noisy clubs. There is a unique atmosphere, reminiscent of the Caribbean islands, with their sandy beaches, palm trees and clear turquoise water. The long sandy spit of Illetas in the northern part of the island is a favorite anchorage for yachtsmen.

Anchorage in the island’s bay.

Time for lunch, swimming and walk around the island.

Once a small fishing village, San Antonio Abad is now a wonderful and crowded tourist resort and the second largest town on the island. The local parish church, whitewashed on a low hill, dates from the early 14th century.

Port Adratz on the island of Mallorca is a small cozy town with a beautiful marina. It’s perfect for relaxing after a day at sea. There are plenty of cafes and restaurants along the coastline and luxury yachts near the piers. This is the place of residence of celebrities and the rich.