Jamaica is an island country in the West Indies in the Caribbean Sea. It includes the island of Jamaica, part of the Greater Antilles. North of Jamaica is Cuba (150 km) and east through the Strait of Jamaica to Haiti (160 km). The nearest point of the continent is cape Gracias a Dios (Nicaragua), located 630 km to the southwest.

Jamaica’s main minerals are bauxite, for which the country leads the world in reserves.

Most of the territory of Jamaica (about 2/3) is a limestone plateau 500-1000 m high, higher in places. In the eastern part of the island are the Blue Mountains, where the highest point of the country, Blue Mountain (height 2256 m) is located. In the southwest is Mount Malvern (725 m), and in the west is Mount Dolphin Head (545 m). Karst forms of relief are widespread in the western part of the island, represented in Mount John Crow, Dry Harbor and in the Cockpit Country Karst Basin with an area of about 1300 km². The basin is a complex of low hills separated by narrow valleys. This area is characterized by sinkholes and underground watercourses. [3]

Along the southern and western coast there are alluvial lowlands. The south coast of the island is heavily dissected, with reef-fringed harbors such as Kingston Harbor. On the west coast, the beach of coral sand stretches for 11 km near the town of Negril. The northern shore is sparsely dissected and has a rocky character. In its center is popular with tourists Jamaican riviera – a narrow strip of beaches of fine white sand. [4]

Jamaica is in a tropical climate zone influenced by trade winds. Temperatures vary slightly throughout the year, with averages of 24-25° C in January and 26-27° C in July. [2] Local climatic characteristics depend on relief features and position relative to the prevailing northeasterly trade winds. In the Kingston area, the annual average temperature varies from 24° to 27° C, and in Gordon Hill in the Blue Mountains, it varies from 4° to 7° C.

Precipitation is seasonal and particularly intense in May and October, although thunderstorms with heavy rainfall also occur during the summer months. The average annual precipitation rate is 2,100 mm, but also depends on the area. [3] The south coast receives 635 mm of rain and the John Crow Mountains in the northeast of the island receive up to 7,600 mm. The rainy season lasts from May to October, [4] and during the winter months (December to March) cold north winds from the North American continent reach the island. [3]

Jamaica is located in the Atlantic hurricane belt, which causes much damage to the population and economy. Hurricanes Charlie (1951), Allen (1980), and Gilbert (1988) are among the particularly strong hurricanes that have swept right across the island. [3] Hurricanes Ivan (2004) and Dean (2007) caused numerous devastations and deaths on the island. 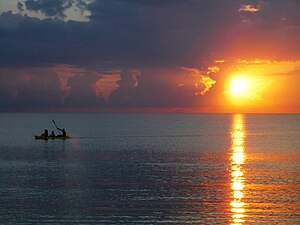 The island’s name is derived from the distorted Native American word “haymaca,” which means “island of springs,” or “land of streams.” [5] Jamaica is home to many small rivers and streams that originate in the central highlands and often disappear into karst cavities. The total renewable water resource is 9.4 km³ (2000). [1] The longest river is the Minho (93 km) flowing from the Dry Harbor Mountains to Carlisle Bay. Two more rivers, the Black River in the western part and the Rio Cobre near Kingston, are more than 50 km long. [3] Of all the rivers on the island, the Black River is navigable for a considerable distance – small ships can go up 48 km from the mouth. [4] The only river not flowing north or south is the Plantain Garden in the east of the island.

More than half of the island’s surface is covered with white limestone, with yellow limestone, older metamorphic and volcanic rocks underneath. Soils are predominantly mountainous brownish-red and red-brown savanna and dry forest soils. [2] The thin layer of soils of upland areas is particularly prone to erosion. Alluvial soils of coastal plains are mainly composed of sunglik. [As of 2005, 15.83% of the land was cropland and 10.01% was used for permanent crops. As of 2002, 250 km² were irrigated. [1] 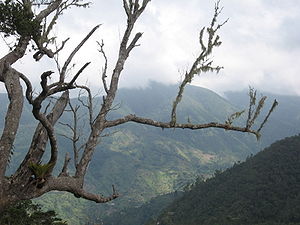 The island is known for its diverse ecosystems, including low-growth forests high in the mountains, jungle on the northeastern slopes of the mountains and in the valleys, savannas to the south and west, and sandy areas where only cacti and other xerophytic plants grow. Since the fifteenth century, when the island was entirely forested except for small agricultural areas, the vegetation has changed dramatically. Colonists cut down trees for building needs and cleared plains, savannas, and mountainsides for soil cultivation. Many species were introduced, including sugarcane, bananas, and citrus fruits. [3]

The forested area on the island is about 194,000 hectares (1/5 of the total area). Cottonwood is the most widespread; in inaccessible areas there are virgin stands of swietenia largeifolia, ebony, and dahlbergia; in some places there are thickets of bamboo and campesia, as well as plantings of Caribbean pine and eucalyptus. The southern coast is overgrown with mangroves in many places. In the western and southwestern part of the island, savannah-type vegetation (grasses and solitary trees) is common in places where the land is not used for plantations. In all, there are more than 3,000 species of flowering plants on the island, including 200 species of orchids and the hibiscus sabdariffa (from which the carcade is made). [4] 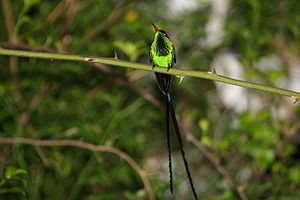 The animal life of Jamaica is relatively poor: birds, rodents (rats, mice), rabbits, mongooses, reptiles (turtles, snakes, crocodiles and iguanas) and 20 species of bats. Native animals in Jamaica are few, the fauna of the island has been severely affected by human development. In pre-Columbian times, the island was home to numerous members of the Hutii family, but their numbers later declined due to hunting and habitat destruction. Native crocodiles may also be in danger of extinction. The mongooses imported in 1872 from India have spread widely. [3]

The waters of the island and coastal areas are rich in fish. Freshwater fish are represented mainly by mullet, there are 4 species of freshwater crayfish. Coastal waters are inhabited by manatees.

More than 250 species of birds have been recorded including migratory birds, and 25 species and 21 subspecies are endemic, including the national symbol – the Hummingbird. [3] Introduced species include mayflies. [4]

Conservation areas on the island include Cockpit Country, Hellshire Hills and Litchfield Forest Preserves. In 1992, the first marine park was organized in Montego Bay and has an area of 15 km². In 1993, Blue Mountains and John Crow National Parks were established. [3]

Half of its territory is mountainous, the highest peak – Blue Peak reaches 2,220 meters. Jamaica has more than 120 rivers, many waterfalls of unprecedented beauty, mineral springs.

There are fertile soils and picturesque landscapes, a delightful coastline with sandy beaches, bays, coves and coastal reefs.

Jamaica – it’s lush nature, many rivers and waterfalls of fantastic beauty, emerald meadows and mysterious forests, picturesque bays and creeks, endless golden beaches. Many hotels are All Inclusive, which means you do not have to pay for the pleasure: tennis and mini-golf, discos, daily shows, yachts, catamarans, water skis and even snorkeling equipment – all included in the price. The choice of hotels “of interest” on the island is quite large. Some holidays are only for couples, there are hotels for families with children, hotels for honeymoon, etc. However, the main thing on Jamaica is not only comfort and excellent service, but the unique relaxed atmosphere, which is typical only for the islands of the Caribbean. What you see and feel will always come back to you when you hear Bob Marley’s languidly rhythmic songs or just reggae sounds.

Jamaica has a humid tropical climate. The average annual temperature on the coast about 27 ° C, in the center of the country – about 22 ° C. In August and September strong winds are possible. The temperature can fall to +10 °С high in the mountains. Northeasterly winds and evening breezes from the mountains keep the coast pleasantly fresh.

The population of Jamaica is about 2.5 million people, 78% of whom live in urban areas. Modern Jamaicans are the descendants of Negro slaves who were imported from Africa by the Spanish and then by the British to provide labor for the sugar plantations (the indigenous Jamaican Indian population was exterminated). Negroes make up more than 75% of Jamaicans, and the rest are mulattoes of varying degrees of mix. Most of the Jamaican population is Protestant; there are also a small number of Catholics, but there are also syncretic Christian and African sects. The state language of Jamaica is English. However, the spoken Jamaican dialect has little in common with literary English. It contains many words from various African languages and the pronunciation is very far from English. That is why the Jamaican dialect is sometimes considered a special Creole language.

The capital is Kingston.

The currency is the Jamaican dollar. US dollars, traveler’s checks and major credit cards are accepted.

The time difference is minus eight hours with Moscow.

Transportation – In most hotels transfer from the airport is included in the price. It is recommended to discuss the cost of cab fare with the driver in advance.

National cuisine is full of exoticism and combines the traditions of Spanish, African and Chinese cuisine. Popular seafood, marinated and fried with peppers and onions. It is worth trying the famous exotic fruits, Jamaican rum and coffee “Blue Mountain”.

Electrical voltage is the standard 110 volts, but most hotels have 220 volts.

To make a tour reservation or to get more detailed information you can contact your consulting managers: tel.: +7 495 740-29-89, e-mail: ac@actravel.ru