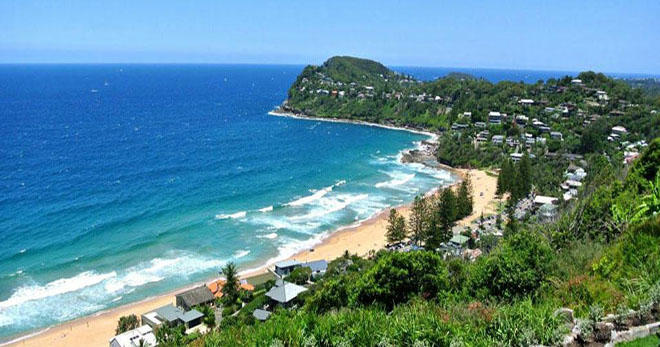 Jaffna is a major Lankan city located in the north of the country and washed by three bays of the Indian Ocean. Its convenient location has made it a major transportation center and seaport of the country. It is interesting not only for its beaches, but also for its cultural heritage, a large number of monuments and places of worship.

The climate in Jaffna is the hottest and driest in all of Sri Lanka. Monsoons bring rainfall to the west or east coast of the island without affecting the north. The average temperature here throughout the year ranges from +28 ° C to +30 ° C, and the ocean waters warm up to +27 ° C.

Before the arrival of Europeans here was the richest kingdom of Jaffna, which controlled part of Sri Lanka and small islands off the northern coast. The main occupation of the locals was the fishing of pearls in the coastal waters. The kingdom was first taken over by the Portuguese in the early 17th century and they established a supply of pearls to Europe. To protect their territories, they built a white fort made of pressed blocks. The main source of building material for the fort was white coral.

During British rule of Ceylon schools and universities began to develop here, where languages, sciences, and exact sciences were taught. Today Jaffna still retains the lead in the number and standard of educational institutions in the country. 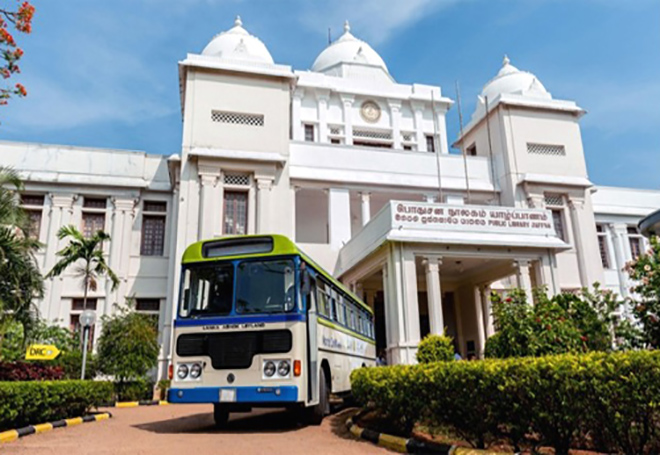 Sri Lanka is rich in places of worship of different religions, many of which are located in Jaffna. Here you can also explore the history of the universities, walk through the narrow streets of the old center and admire the amazing six-pointed shape of the main attraction of the city – the white fort.

Here’s what to do in Jaffna:

READ
What to see in Kiel, Germany

Where to stay in Jaffna?

Some of the most popular hotel options are:

The best restaurants and cafes in Jaffna

A major seaside city offers its guests dishes of selected seafood. Here you can taste the most delicious shrimp, octopus, lobster and a variety of fish. All dishes are usually accompanied with a side dish of rice and fresh vegetables. For vegetarians there are many places in the city where the menu is completely free of meat. So, the most popular establishments:

How to get to Jaffna?

The city is located on a peninsula at the northernmost point of the island, 300 km from Colombo. The best way to get here is by plane. The local airport accepts daily flights from the capital. The flight time is 40 minutes. By land, you can reach the city by bus or car for 7 hours along highways A28 and A9. The pavement quality is very good and there are some toll roads.

Jaffna (Tamil: Yalpanam, Sinhalese: Yapanaya) is the capital of the Northern Province of Sri Lanka and the district capital of Jaffna, situated on the peninsula of the same name. With a population of almost 90,000 people, Jaffna is the 12th largest city on the island. In addition, Jaffna is a city with a very long and interesting history and some sights. For example, the city is located 10 kilometers from the town of Kandarodai with its famous archaeological sites. A suburb of Jaffna, Nallur, for four centuries was the capital of the medieval state of Jaffna. 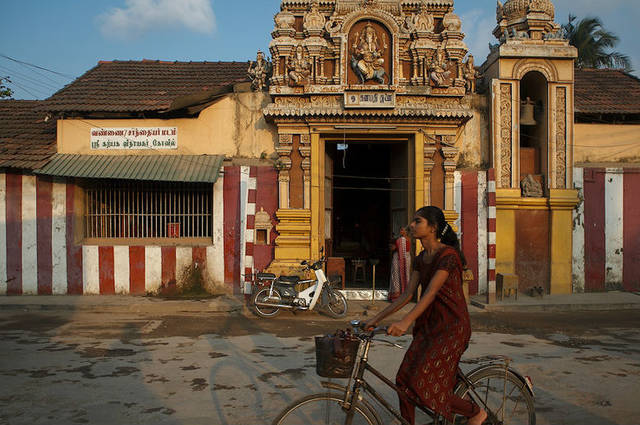 Before the civil war in Sri Lanka, it was the second most populous city in Sri Lanka after the commercial capital of Colombo. In the 1980s, during the riots, most of the city was destroyed and damaged, and the city was occupied by the military. Fishermen and farmers suffered the most. After the civil war ended in 2009, refugees and displaced persons gradually returned to Jaffna and the city was slowly rebuilt. But even today the views are not rosy – it will take years and years to make the town look decent. Well, almost like Grozny, although on a smaller scale and with a “tropical bias”: something repaired, something in ruins, something generally overgrown with jungle.

Where to stay in Jaffna?

Today, Jaffna is not the most popular option among tourists traveling in Sri Lanka. Although the area is certainly colorful and interesting, however, it is still lacking all the amenities that ordinary visitors to the southern part of the island are accustomed to. Of course, there is a place to stay in Jaffna. However, there are few accommodation options, and this despite the fact that the city – one of the largest in Lanka. After all, everything had to be rebuilt at a very rapid pace after the civil war in 2009, when everything was in a terrible state of neglect and destruction. You have to agree that it’s not a long time, and many hotels appeared on the map only a year and a half ago. In general, a lot has been done to restore the city to its former appearance. So, here are the best options for accommodation in and around Jaffna. 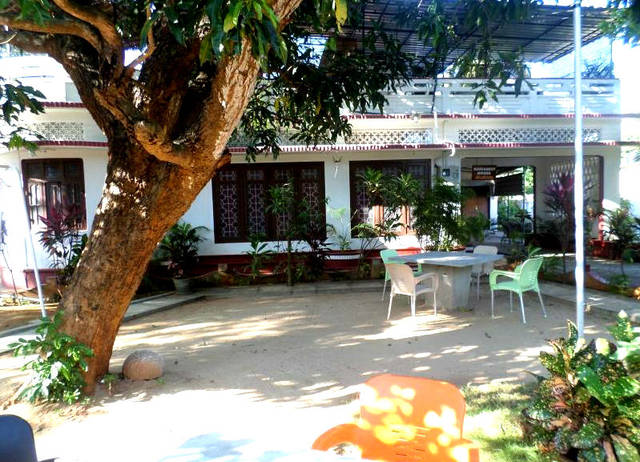 This guest house is practically in the center of town, near the Nallur Temple and a number of vegetarian restaurants, on Columbuthurai Road, away from the noise (although the room farthest from the dining room can be a bit noisy during the day – but it’s quiet at night). This option is inexpensive and very simple, as are almost all of the town’s guesthouses. The house has three rooms, parking, a nice outdoor dining area, a modest garden (mostly pots of flowers). The furniture is as simple as possible, the shared bathroom is clean. Friendly attentive staff (though with very crooked English), homely atmosphere. Don’t expect anything fancy – the… read full.

In the last couple of years, Jaffna has “gotten back on track,” and now it’s showing the world almost a new face, although the environments of terrible destruction are still evident. In Jaffna, several new hotels have been built, and it is not a big problem to grab a bite to eat here. The cuisine is mostly traditional, Sri Lankan, Indian and Chinese. And here are the best restaurants in town, where you can and should go during a visit to this colorful town. 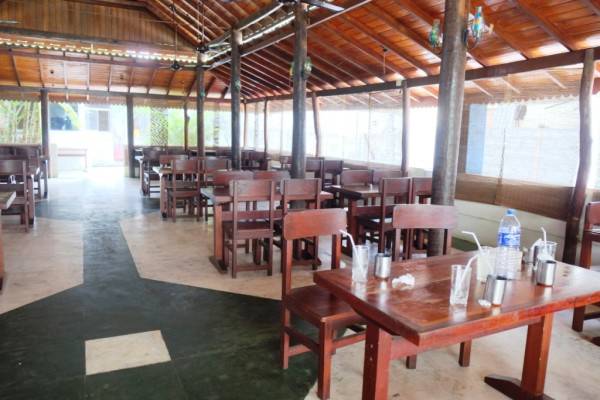 This is a South Indian and North Lankan restaurant. Perhaps the most popular in town and the most visited by tourists. The restaurant is vegetarian, with two “sets” of dishes, such as for lunch at terribly low prices. So two people can eat from the belly (and with drinks) for only Rs 850-900. Be sure to try the parotta (layered flatbread) and kothu (thin flatbread made of wheat flour with vegetables, egg and/or meat and spices). Kothu is considered the Sri Lankan equivalent of a hamburger, in terms of its popularity. The place is clean, tidy, with ample parking space and a pleasant overall atmosphere. The restaurant is perfect if you want a quick, tasty and cheap meal. read completely

What to see in Jaffna?

Here’s what to see in the Jaffna area:

The fort of Jaffna is in the central part of the city, naturally, on the coast. It looks about the same as the fort of Galle or Matara, although the traces of destruction are more evident here. The fortress was built in 1618 by the Portuguese. Because of the many miracles attributed to the statue of the Virgin Mary, located in one of the churches inside the fort, the fort of Jaffna was named Fortaleza de Nossa Senhora dos Milagres de Jafanapatão (Fortress of the Miracle of Our Lady of Jafanapatão). Forty years after its founding, the fort was successfully captured by the Dutch, who also enlarged and fortified it. In 1795 the fort was taken over by the British, and remained so until 1948. A large military fort with military buildings on the ramparts, Jaffna Fort became a haven for the Sri Lankan Army (the army of Ceylon originally) after the country gained independence. The fort was besieged several times during the Lankan civil war, and from 1986 to 1995 the fort was under the control of the LTTE (Liberation Tigers of Tamil Eelam). read full

READ
The Great Barrier Reef, Australia is a must-see

How to have fun?

Jaffna is not a “bounty paradise” as many people think. Rather, it is a desolate area with little vegetation and the visible effects of a debilitating civil war. Destroyed buildings and houses, for example, are still there, even if they are partially restored. Tourists, however, are interested in seeing the local sights – the fort with the museum, the Kandaswami Temple near the city, the Archaeological Museum with ancient exhibits. What about entertainment? Of course, Jaffna is not Turkey / Egypt with cheerful animation everywhere. But still?

Since the town is coastal, beach vacation here as well has a place. Casuarina Beach is on the small island of Karainagar, located 20 kilometers from the center of Jaffna. In Tamil, the name of the island means “a place with numerous kaarai trees”.) The area of the island is about 26 square kilometers and it has about 11,000 inhabitants. The island is connected to the mainland (let’s call Lanka in this context) by a long bridge. So, here’s the beach. The beach is nice, with soft sand, and it is especially cool here to meet the sunset. However, the beach does not have a shower with fresh water, which for many people is uncomfortable (sometimes locals set a kind of shower, for the use of which you will have to pay about 50 rupees – bearable). By the way, the entrance to the beach is paid – 100 rupees. There are no cafes and restaurants there, but there are beach… read all about it

Weather in Jaffna by month:

Jaffna – a paradise for extreme people

My vacation with friends in March in Jaffna started out rather difficult, or rather, the way to the city itself. After arriving in Colombo, we started looking for a way to get to Jaffna, as our tour unfortunately did not include transportation to the hotel. First we had to go to the town of Vavuniya, as we could get directly to Jaffna from there. We reached there without any adventures. When we finally found the bus to Jaffna we were horrified. Not only was it old and shabby, but it was completely packed. We didn’t want to wait an hour and a half for the next bus, which the driver said should be newer, so we somehow managed to sit on one leg inside the bus with all our belongings, and hit the road. It was a trip I will probably never forget. But finally, we reached the city. 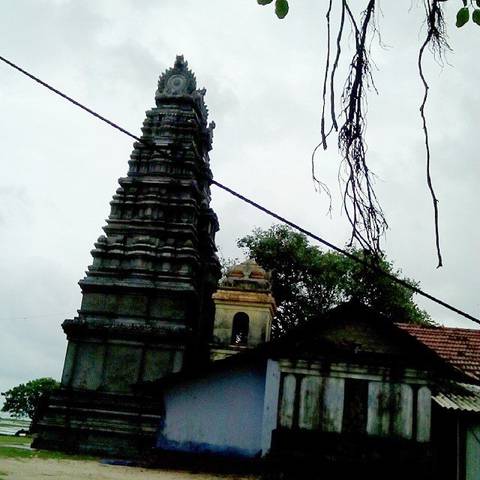 To tell the truth, I imagined it differently. It was rather deserted, not much vegetation compared to the capital, and, most importantly, the aftermath of years of civil war. There are still real minefields, looking at which I had already begun to regret that I had come, there are ruined buildings and houses, although much has been restored.

We stayed at Kais Guest House Hotel for $39 per person per night. Apart from the fact that the rooms are very small, the hotel is pretty good. The room has air conditioning, internet, new furniture, all appliances work.

The first day we had a rest after moving in, and the second day we went to study… read in full