What to see in Singapore in 1 day. Itinerary of attractions.

Singapore, though small, is a big island. There are plenty of places worth visiting in Singapore. My list of “must see” attractions in Singapore was made at random: I read something here or there. Of course, we didn’t intend to wander around Singapore at random. We had the Lonely Planet guidebook with us. But we did not intend to follow Lonely Planet’s itinerary either.

On our very first day in Singapore we decided to “rock out”: we took Lonely Planet and walked the route “Colonial and Modern Singapore. It wouldn’t be accurate to say that this itinerary contains the main attractions of Singapore, but that the most famous ones are for sure.

The itinerary is designed for five hours of walking, but with all the stops and “I wonder what’s out there,” it could take longer Are you ready to virtually walk around Singapore? Then let’s go!

The route starts at the legendary Raffles Hotel. The hotel is a symbol of Singapore and one of the must-see attractions. D. Conrad, S. Maugham, R. Kipling all praised the Raffles Hotel. For interest, you can read the history of the hotel on the wiki. 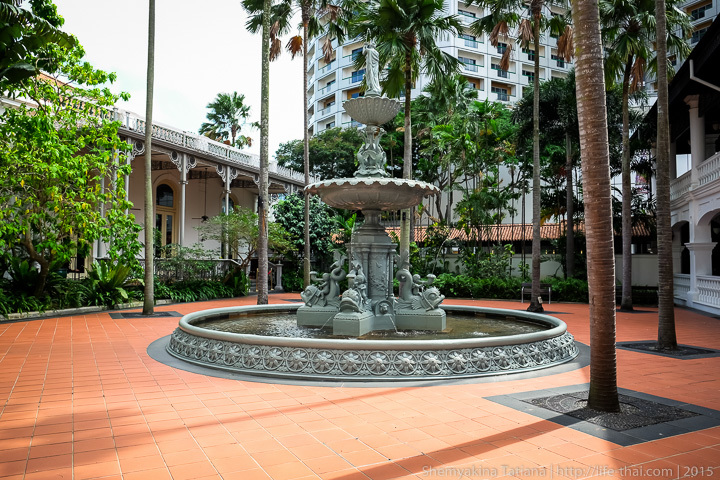 The fountain in the open to tourists part of the hotel 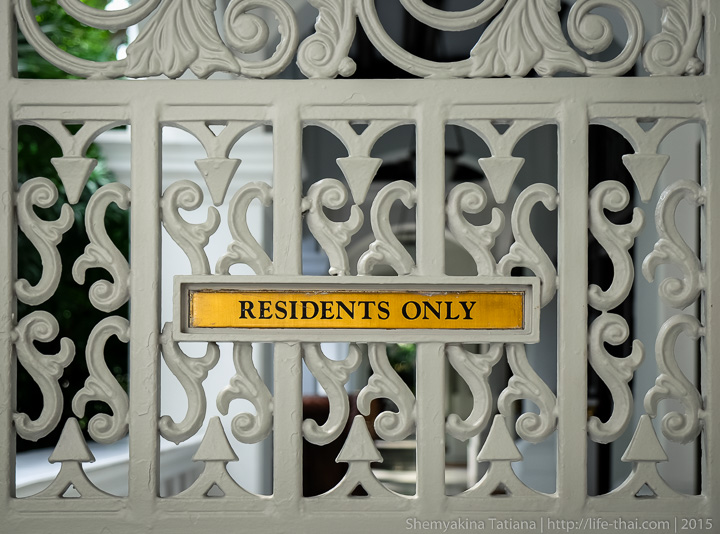 The part of the hotel that is closed to tourists. 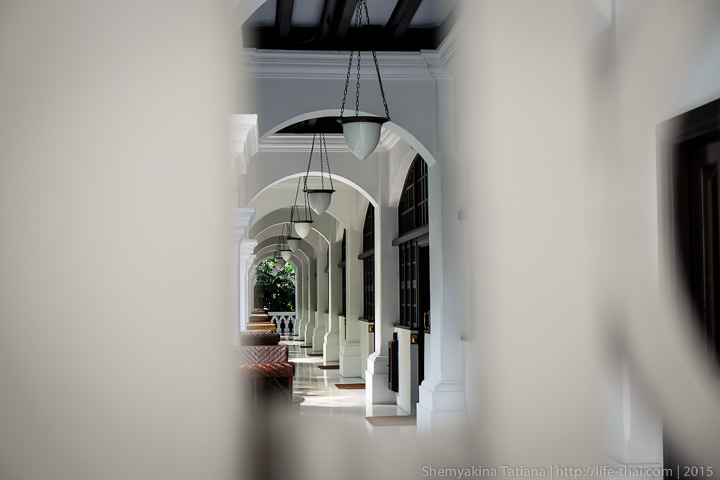 I know, I know, it’s not nice to peek, but just one shot!

There is a souvenir store on the hotel grounds. The prices there are not small, and sold, in my opinion, things with utility of about 0. Souvenirs in a word. It was not the souvenirs that struck me, but the people who piled whole baskets of stuff. What for? Somewhere children have nothing to eat, and somewhere people stock up on stuff for the cost of which you can feed a village in Africa.

Either geese or ducks are a very dynamic sculpture on the way to the next waypoint. 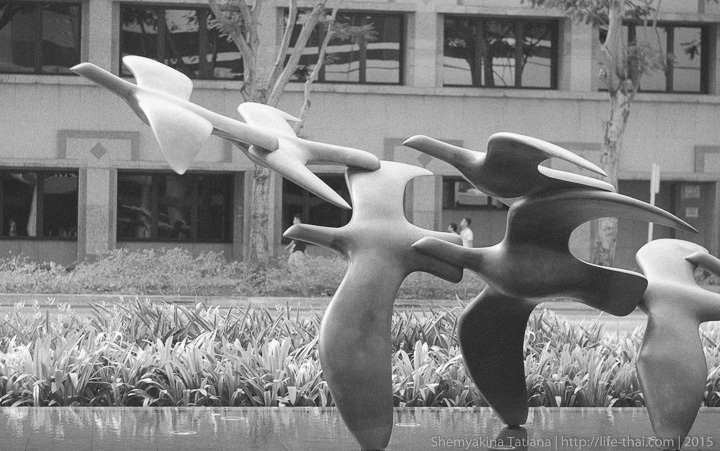 Opposite the birds is a huge mirrored wall of a shopping (sort of) complex. So how can you not “stump the bow”? 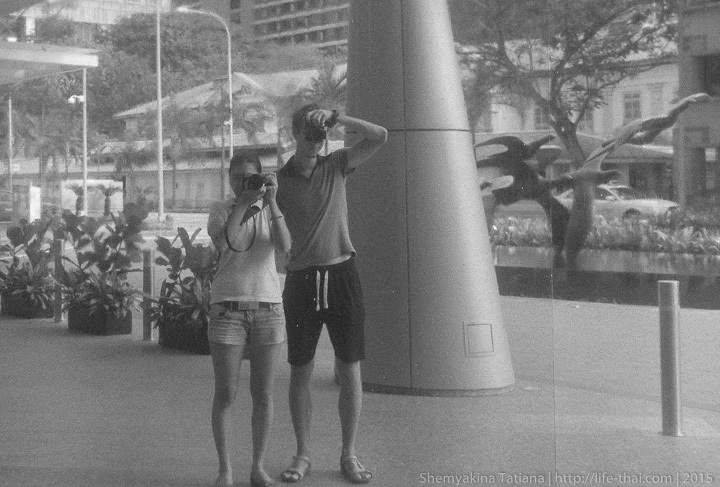 The small, blatantly white and eye-catching St. Andrew’s Cathedral looks absolutely fantastic among the skyscrapers of concrete and glass. 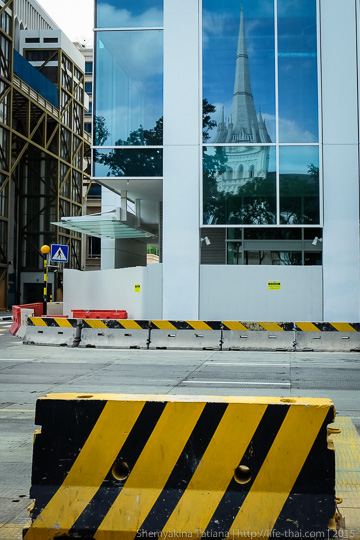 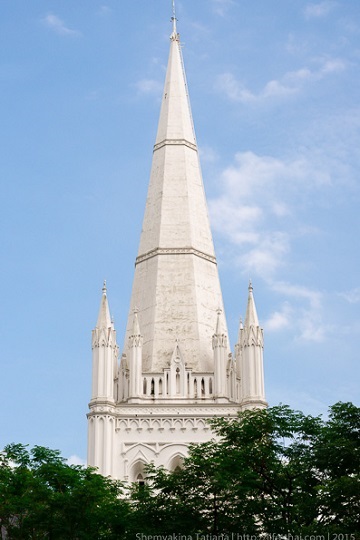 Moving on. Singapore is so stunning that words can’t express it. 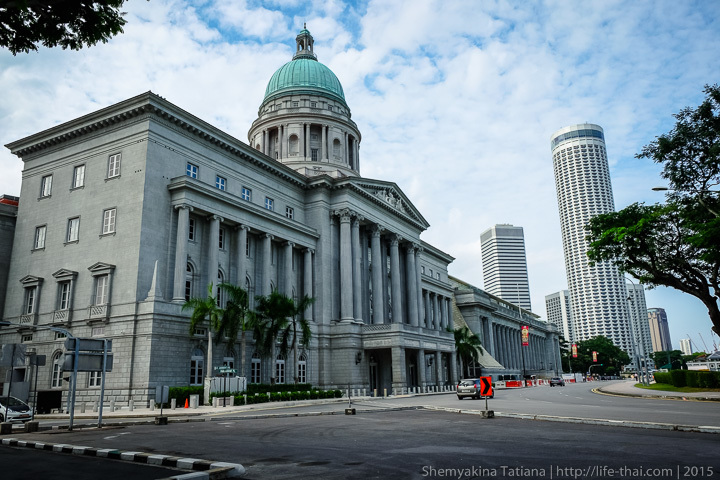 The real Tower of Babel and an inconspicuous memorial to the King of Siam, who visited Singapore back in 1871. 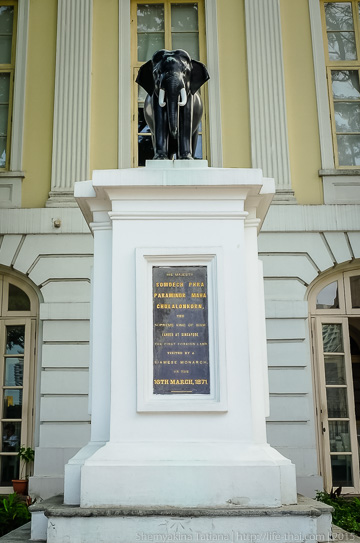 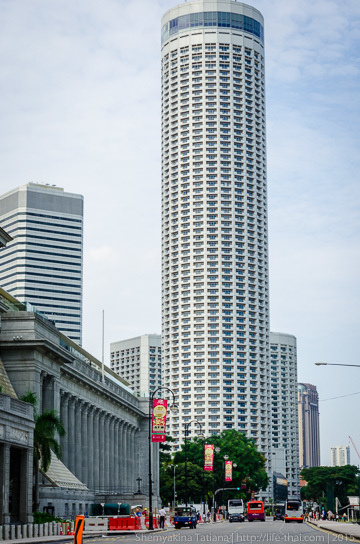 Here is the waterfront of the Singapore River. Like the rest of the city, the waterfront is very green. Lots of shade. In general, we were very lucky: the sky is covered with clouds, but only enough to prevent the sun from squeezing the pedestrians.

The opposite shore is strewn with skyscrapers.

On the shore where we are is a statue of the founder of Singapore, Sir Raffles. Unfortunately, the statue is under renovation, covered in scaffolding and sheathed in transparent material. Not a very exciting sight, so instead of pictures of the statue of Sir Raffles, Igor photographed a bronze sculpture telling about the life of Singaporeans in the distant colonial era.

The sculpture was so lifelike that we hung back and looked at it. 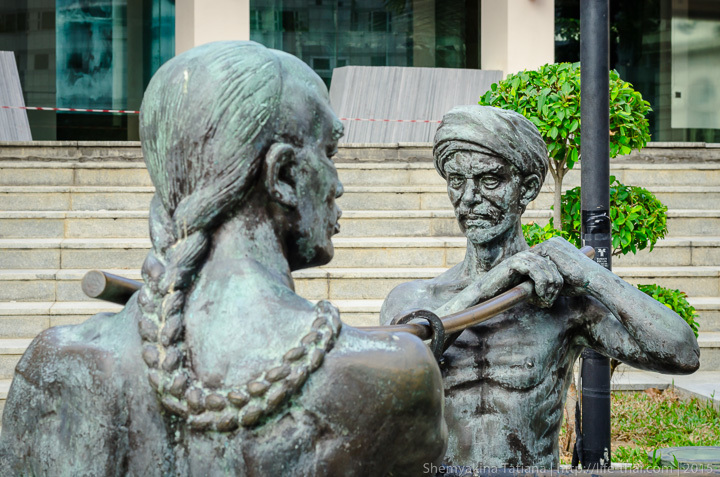 The porter with the long pigtail is clearly Chinese. The pigtail is a sign of loyalty to the emperor.

Here is another sculpture. Also requires time to comprehend. 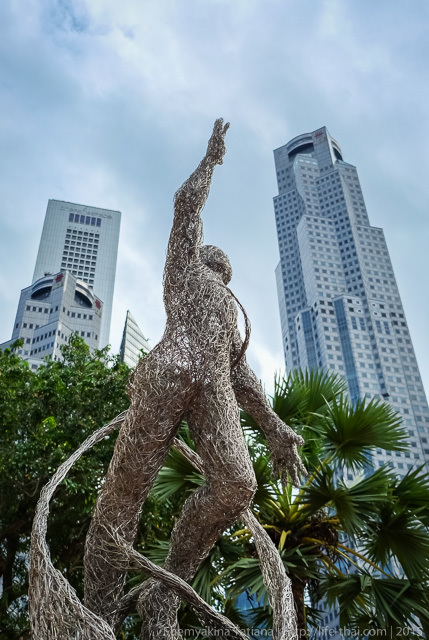 After studying all the statues, we moved on. Our destination was the opposite bank of the river, dotted with small old houses with tiled roofs, behind which gray skyscrapers lined up in dense rows.

It’s hard to take your eyes off of that. And 50 years ago, there was nothing like this. From the Elgin Bridge, I took a few more pictures of the skyscrapers. 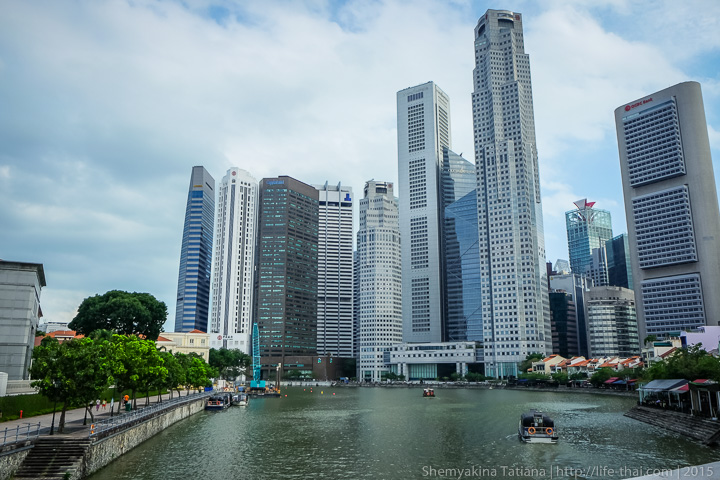 Boat Quay is lined with restaurants and cafes. 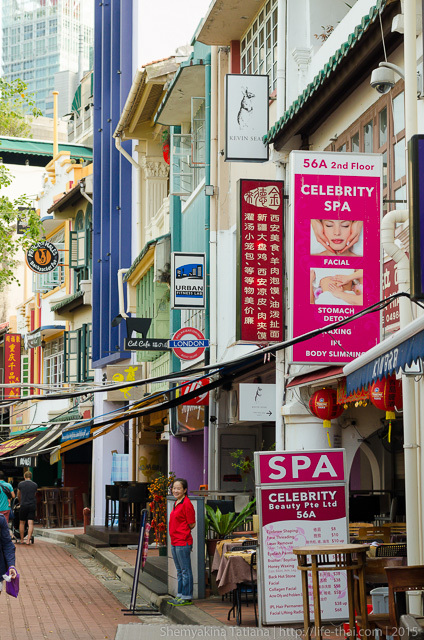 You can eat and relax here and the prices are quite reasonable. There’s a great selection of fresh (I’d say live) seafood dishes. 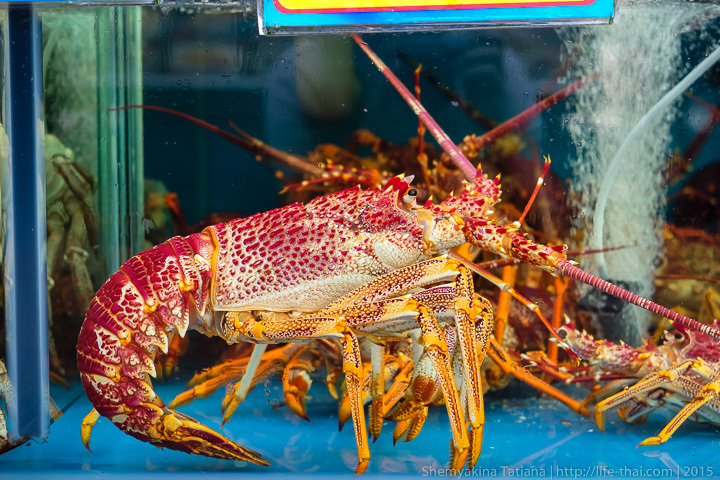 Walking along the Singapore Riverfront is a pleasure, and looking for objects marked on the schematic map in Lonely Planet is a fascinating quest. While looking for one sculpture by Salvador Dali, we found several others and tangerine bushes. 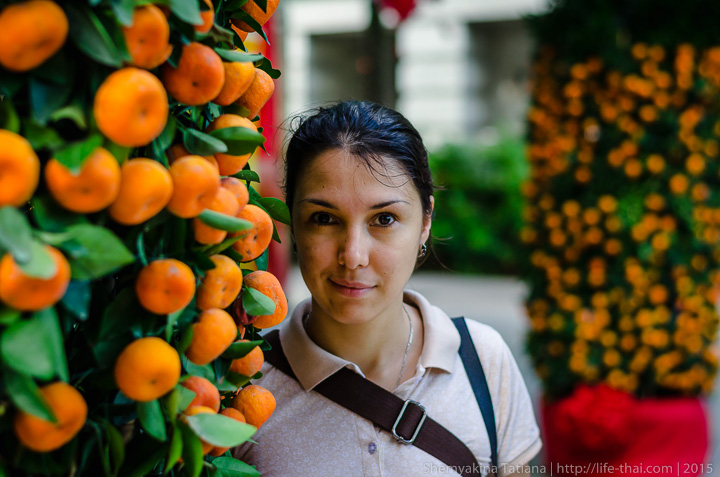 From the maze of skyscrapers through Esplanade drive we came to Marina Promenade. 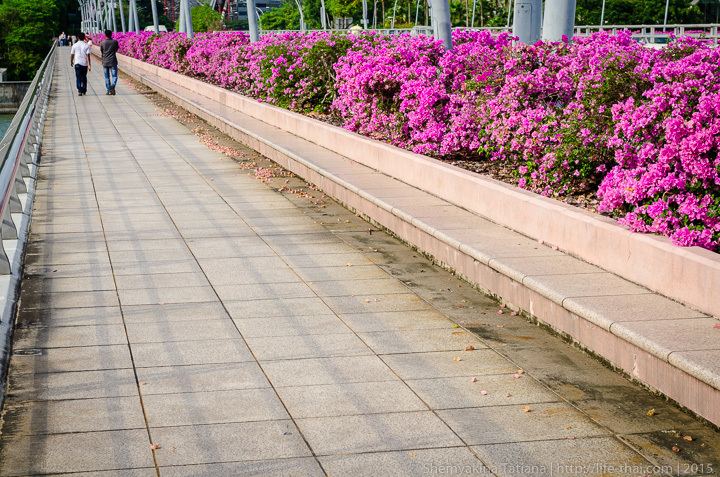 The pedestrian walkway on the Esplanade dr. bridge.

On the way we took another couple of pictures of Singapore’s beauty, but from a different angle. 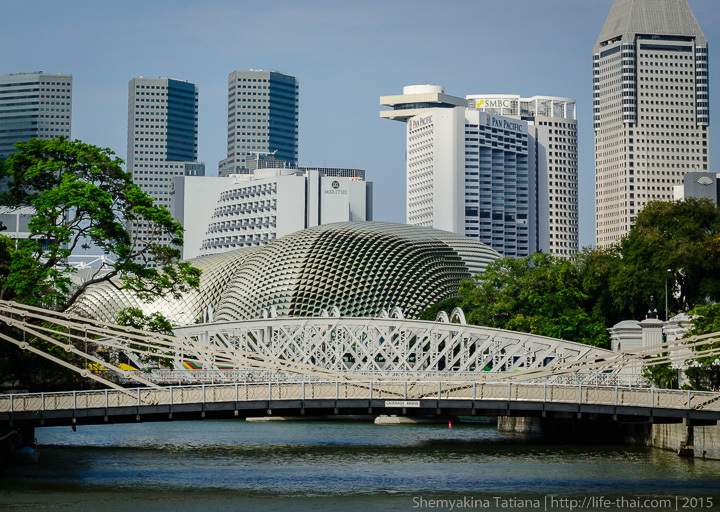 Do you see a strange dome-shaped prickly structure right behind the bridge in the photo? It is a durian-shaped building. Here is a miracle of engineering thought closer: 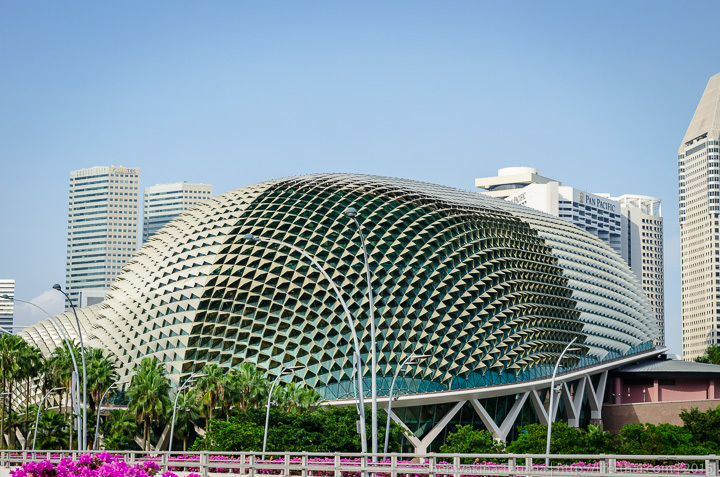 In Asia, the durian is considered the king of fruits. We don’t really share people’s enthusiasm for durian. We tried it a few times, but nothing. I can’t even stand the smell of it, it makes me sick. But a lot of people eat durian in their mouths.

We made our first stop at Marina Promenade. Here is Food City, where you can eat inexpensive and delicious food. The portions are huge and fit several people. I won’t take photos of the food, we were too hungry I will just show you the Chinese, who we joined out of desperation: all the tables were taken.

READ
Bologna is the scholarly capital of Italy 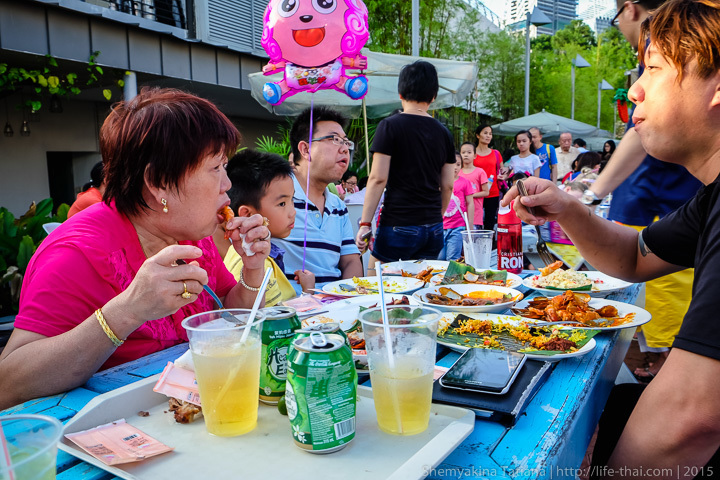 Marina Promenade has gorgeous views of the skyscrapers and the famous Marina Bay Sands Hotel.

It looks like an ordinary three skyscrapers, of which there are many in Singapore, if it were not for the boat on the roof. And hotels with a boat on the roof, you know, nowadays are very expensive. From $300 a night. 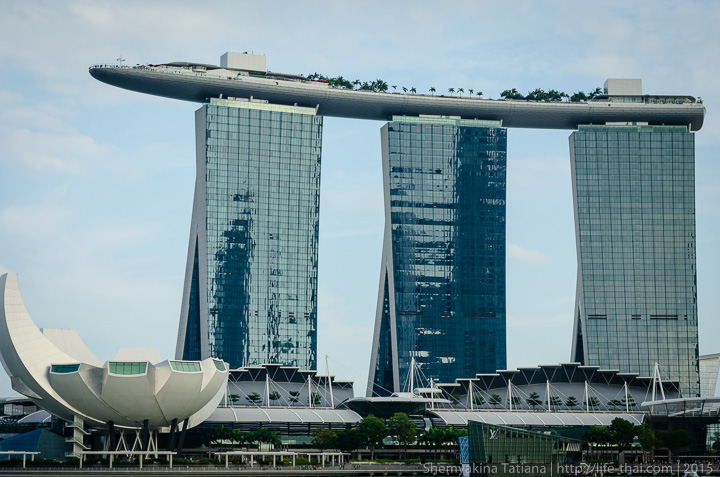 It costs SGD 23 per person to get on the roof of the Marina Bay Hotel in Singapore. The post “Photo: Singapore from the roof of Marina Bay Sands” is just about how we climbed to the roof and the views from the boat.

From the Marina Promenade you can see Merlion. Merlion is either a lionfish or a lionfish, the symbol of Singapore. There is always a full house on the bridge near Merlion. 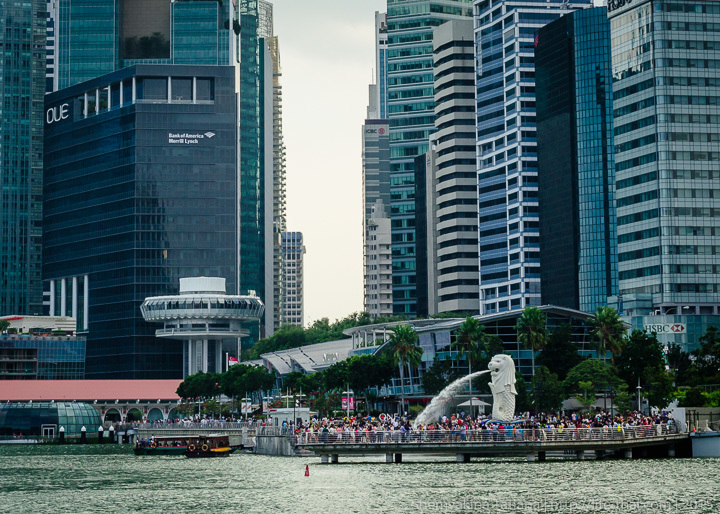 Through the crowds on Marina Promenade we came to the final straight of the route. Lots of people for a reason. Chinese New Year, after all. A holiday. People are resting. 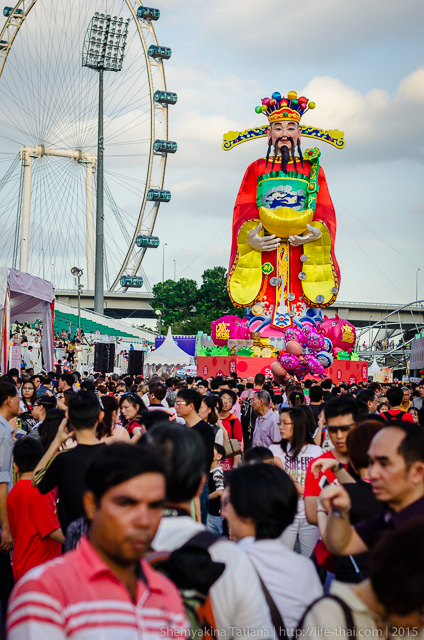 The pedestrian bridge in the form of a double helix of DNA. 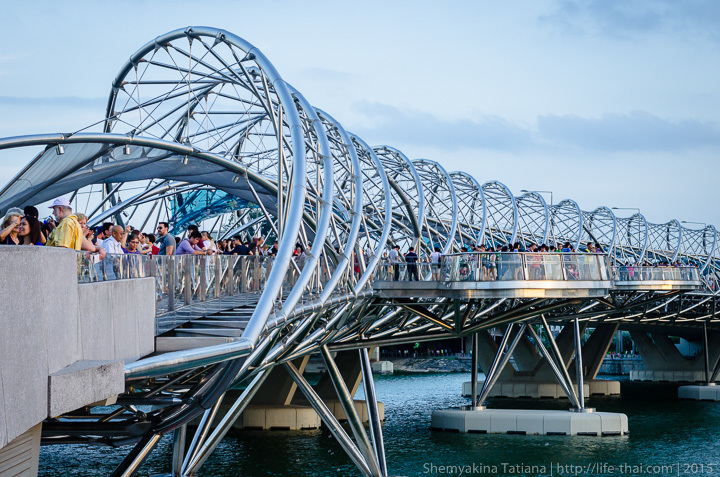 There are balconies on the bridge from which you can take beautiful pictures of Singapore’s skyscrapers. 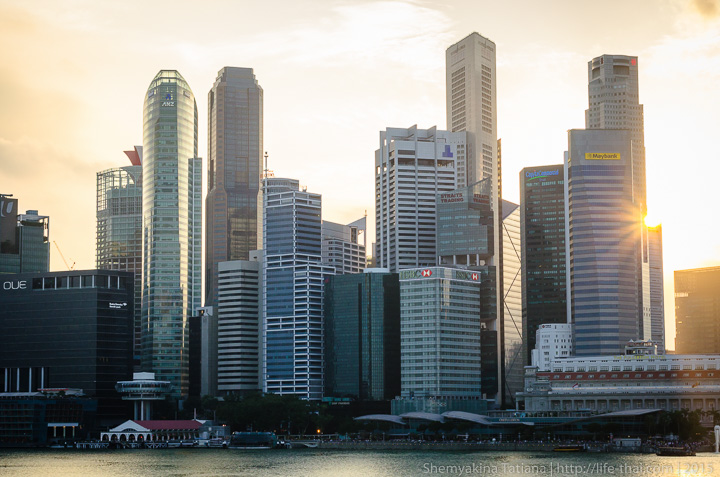 Time to finish. The sun is setting behind the skyscrapers, the battery in the camera is dying, and we are running out of energy.

For the first day it was a great march, to check your strength, to tune in for more. You can read about “more” in the next posts. Stay with us!

Hi, my name is Tatiana, and I’m happy to see you on the Life is Unpredictable! blog. I love to travel, and on the blog I share my experiences, tips and other helpful notes.

This article is recognized to help travelers see Singapore in 1 day. Let me tell you right away that you won’t even get to see the top 10 sights in Singapore and one day on such a city is nothing.

It’s like Friday night you go to the pub and yourself allotted 1 hour of time and yourself calming yourself that you have enough. But we all understand that time is not enough :). It is the same with Singapore. But I hasten to please all who will be here just 1 day: believe me, those tourists who come to Singapore for 3-4 days, it too will not have time to see even half of the required minimum. 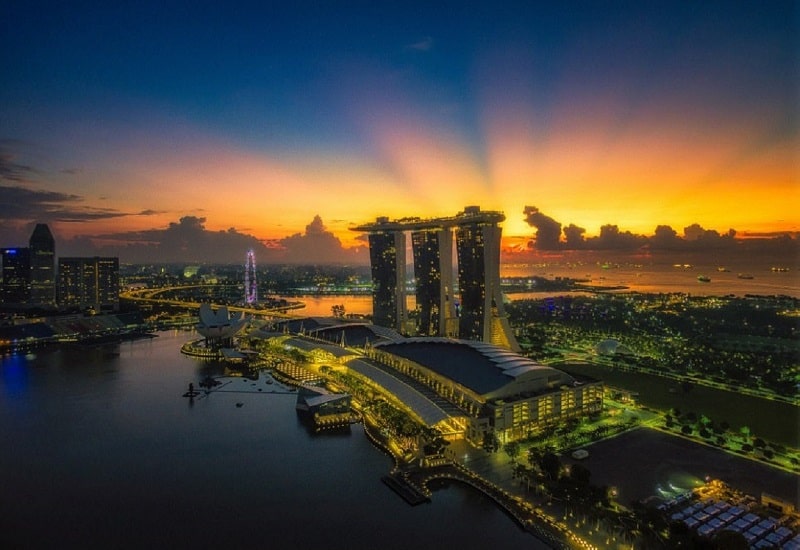 View of the sunset in Singapore at the observation deck

Conclusion: Singapore is a unique city and transportation center of Southeast Asia. Don’t be sad, just plan your next trip to Thailand or Malaysia or Bali through Singapore.

So: you’re like most tourists (98%) in transit in Singapore. And you have only one day to get to know this city of the future. You’ve probably already read the article: top 30+ attractions in Singapore and already wondered by now: what to see in 1 day.

There are two pieces of news for you: bad news and good news. Let’s start with the bad.

I personally think that the subway at the airport is an important point showing the openness of the city and its desire to attract tourists and its level of development. It often happens that to get to the city from the airport is more expensive than a plane ticket. Singapore is very cool in this respect. Transport network is developed chic.

What to see in Singapore in 1 Day

The length of the walking route as on the map above will be at least 8km, if not all 10. Keep this in mind.

Below is a list of sights with timings that you can and should see in 1 day. As a basis for that you arrive in the morning, and leave late at night. And then everyone makes up his own itinerary.

Since you have very little time, you need to look straight at what are the symbols of the city. And this is the main harbor of the city around which there are several major attractions from the category of must see. 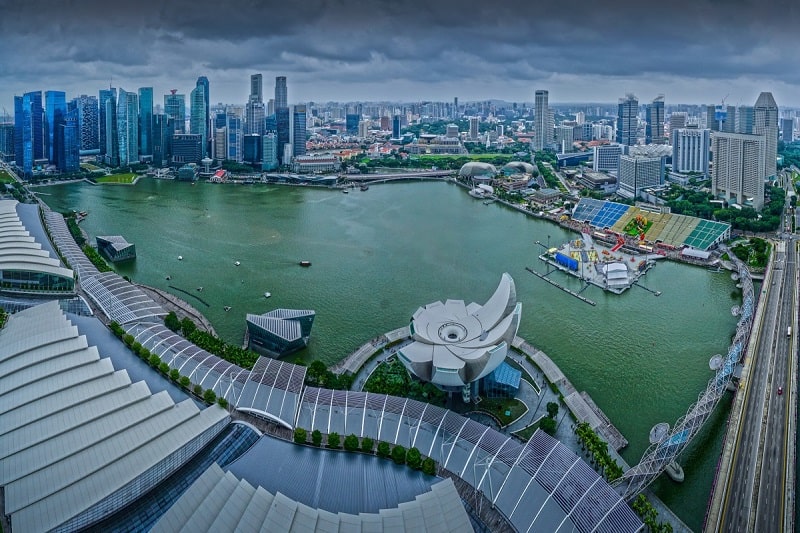 View from the observation deck at Marina Bay Sands Hotel 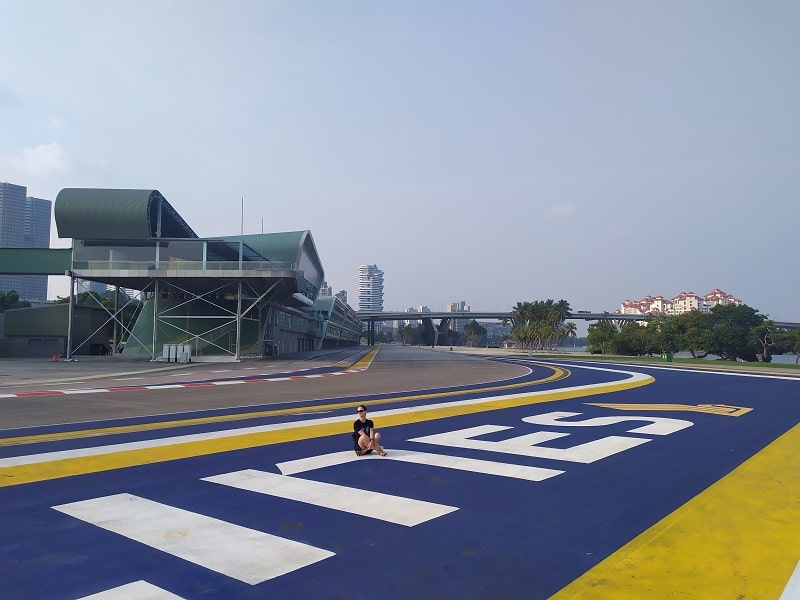