Top 10 the most beautiful beaches in Italy

Italy welcomes its guests with lively bustling beaches and idyllic lagoons hidden behind a succession of impregnable cliffs. Check out Italy’s top 10 most beautiful beaches. 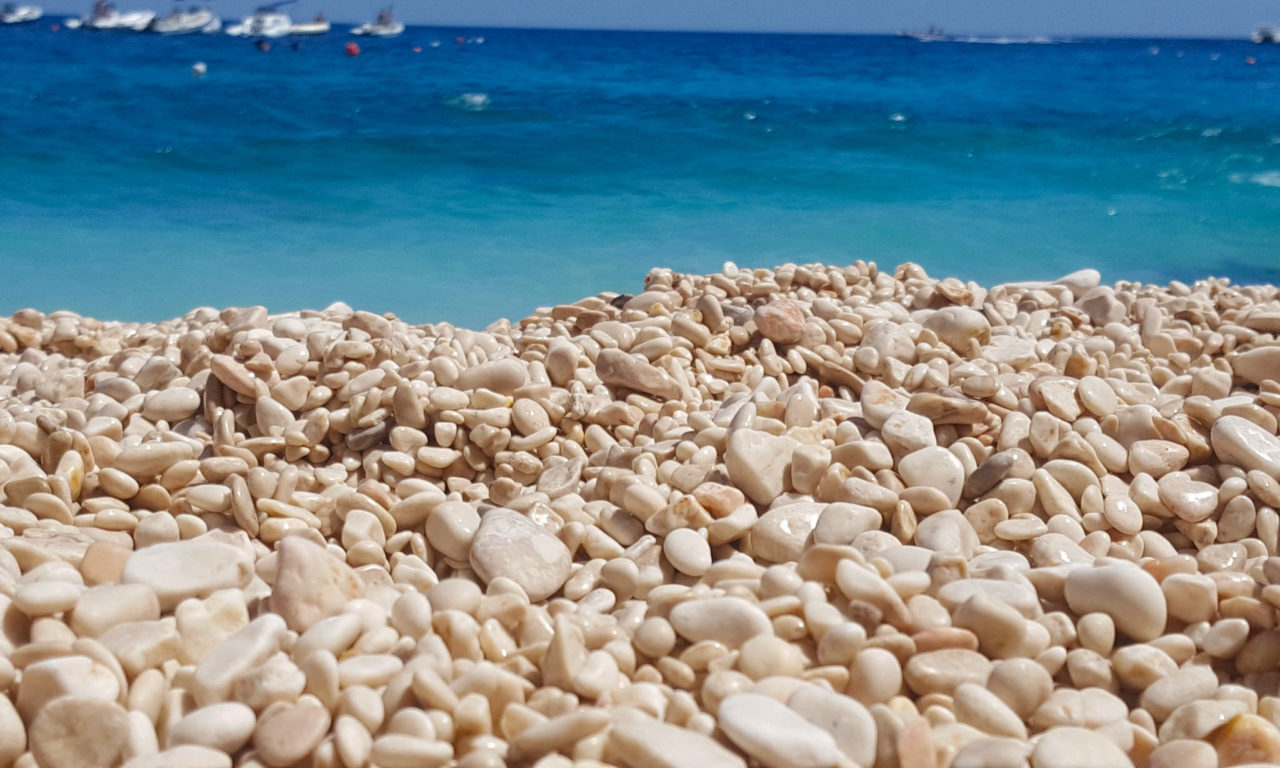 The beaches of Italy, photo by silvia casotti

The length of the Italian beaches is almost 7.5 thousand kilometers. In the coastal towns and communes of the sunny country tourists are waiting for a fabulous landscape: a clear sky, blue clear sea, marble pebbles, clean sand. The coasts of Amalfi and Liguria, romantic Sicily, the beautiful Adriatic and intimate Calabria offer lively and bustling beaches and idyllic lagoons, hidden behind a series of impregnable cliffs.

Here are the top 10 most beautiful beaches in Italy. Among them are places popular all over the world and cozy corners, little known even within the country.

1. Red Bay beach on the island of Favignana off the coast of Sicily 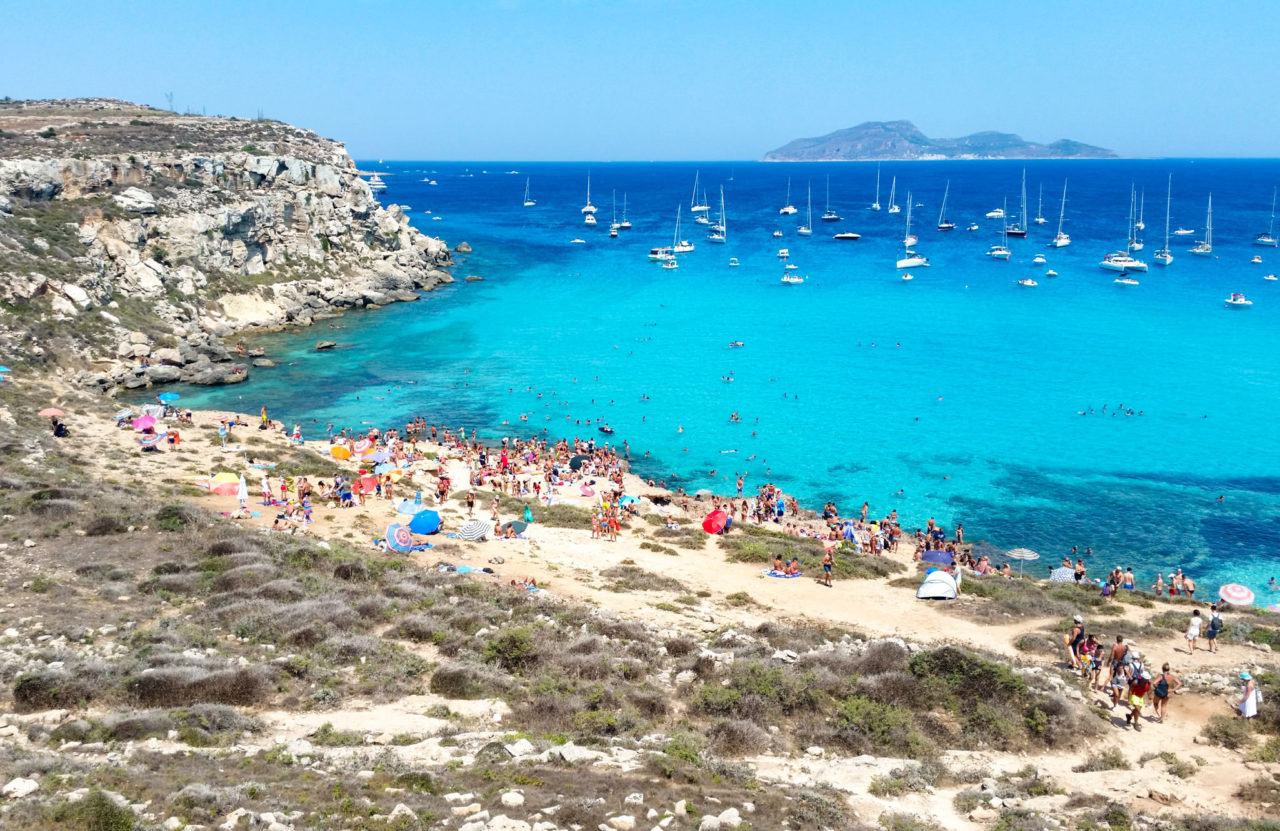 The tiny island of Favignana, part of the group of Aegadian Islands, is home to a little over four thousand people. Here are built about forty hotels. There are not too many tourists in the Red Bay (Cala Rossa) – only a Sicilian ferry connects Favignana with the “mainland”, it is not easy to reach the island. That’s the beauty of Cala Rossa: the bay, surrounded by limestone cliffs, is always cozy, quiet and relaxing.

2. Mariolu Bay on the Tyrrhenian Sea 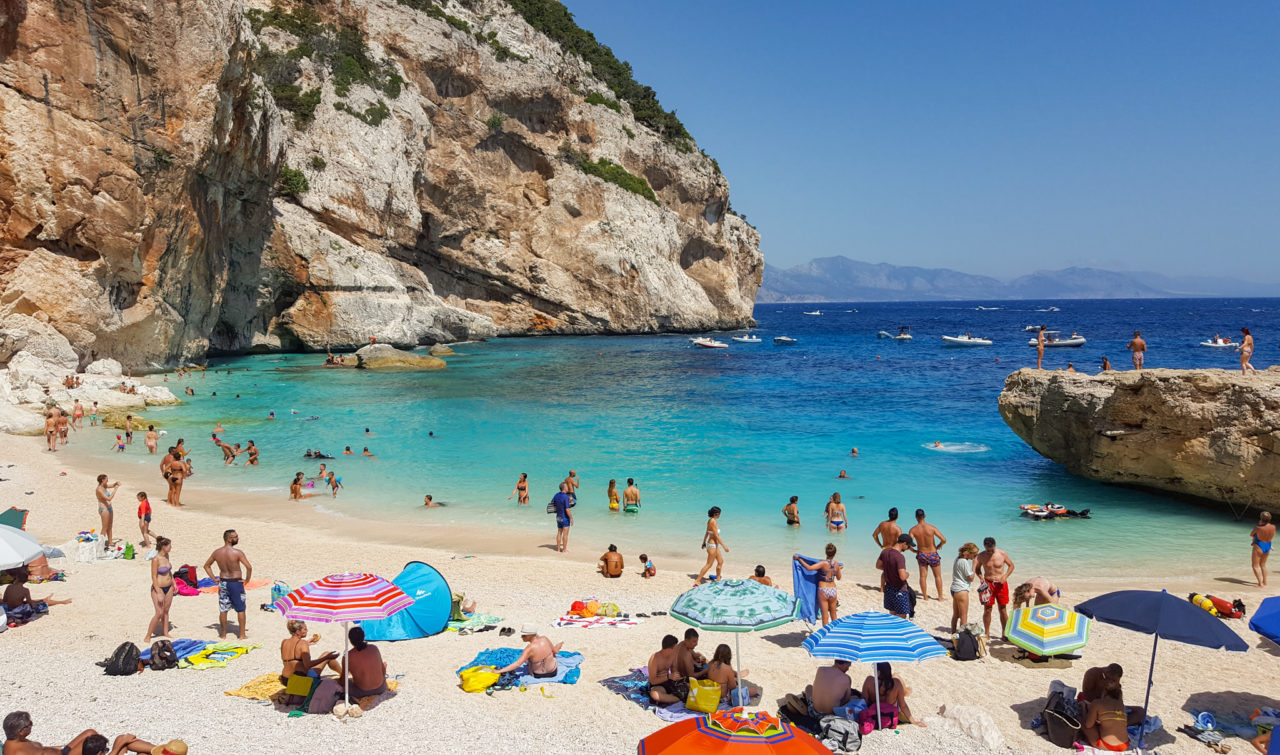 The beach of Cala Mariolu lies between the communes of Orosei and Baunei. The beach is covered with light marble pebbles that change color in the rays of the sun. It is one of the most beautiful beaches on the east coast of Sardinia. The bay is fenced in by the picturesque rocks of the Bay of Orosea, from which bathers dive into the crystal clear water. In high season, Cala Mariola is full of tourists.

3. Marina Picola is one of the best beaches in Capri 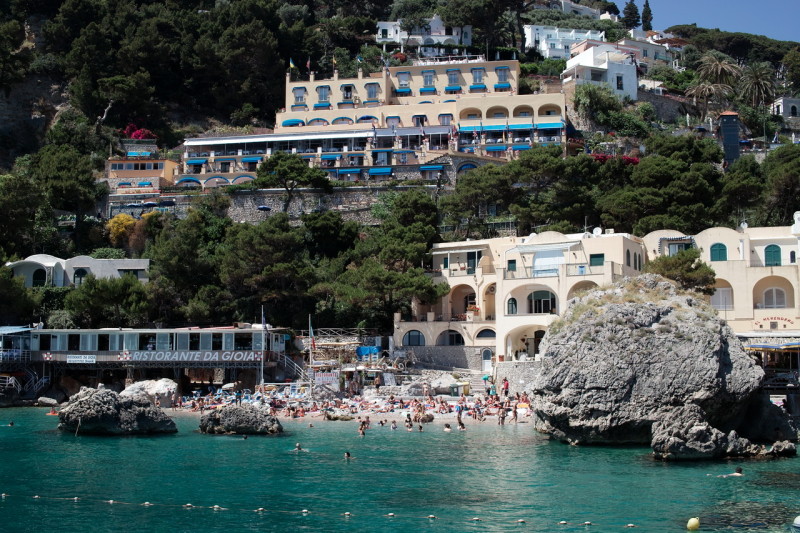 Historically Capri was a place of attraction for the great and the odious. The rulers of the Roman Empire loved to visit it; Lenin and Gorky, Tchaikovsky and Stanislavsky rested there; many world celebrities came here. In a small bay Marina Piccola, according to legend, is the “Rock of the Sirens” glorified by Homer. 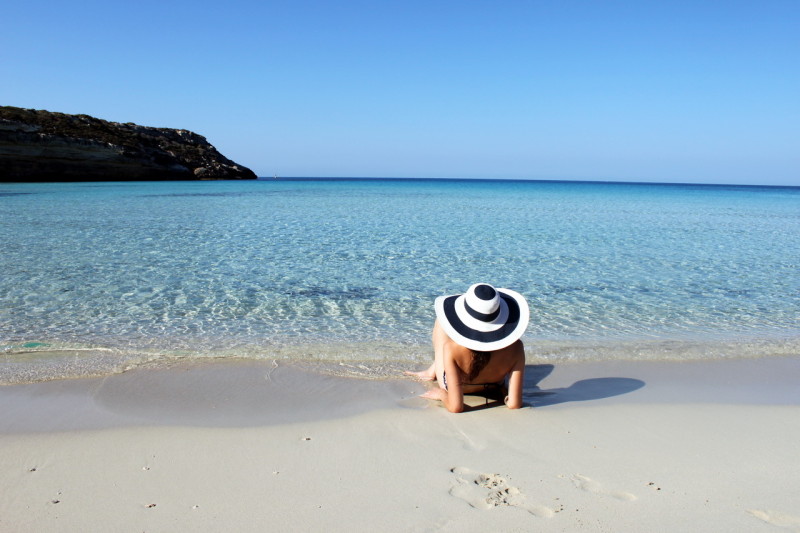 People call this fantastic beach “the beach of rabbits. The beach is located on the island Lampedusa, 200 kilometers away from Sicily. The beach attracts tourists with its snow-white sand and beautiful coastline. The world famous Spiaggia dei Conigli is located in the protected area. Here, right within the beach, the protected caretta caretta sea turtles lay their eggs.

You have to walk to Rabbit Beach, because you can’t get to the beach by bus or car. It takes about twenty minutes to walk along a mountain path. On the way tourists open amazing landscapes of the volcanic island.

5. The beach of Fetovaia on Elba in the Tyrrhenian Sea 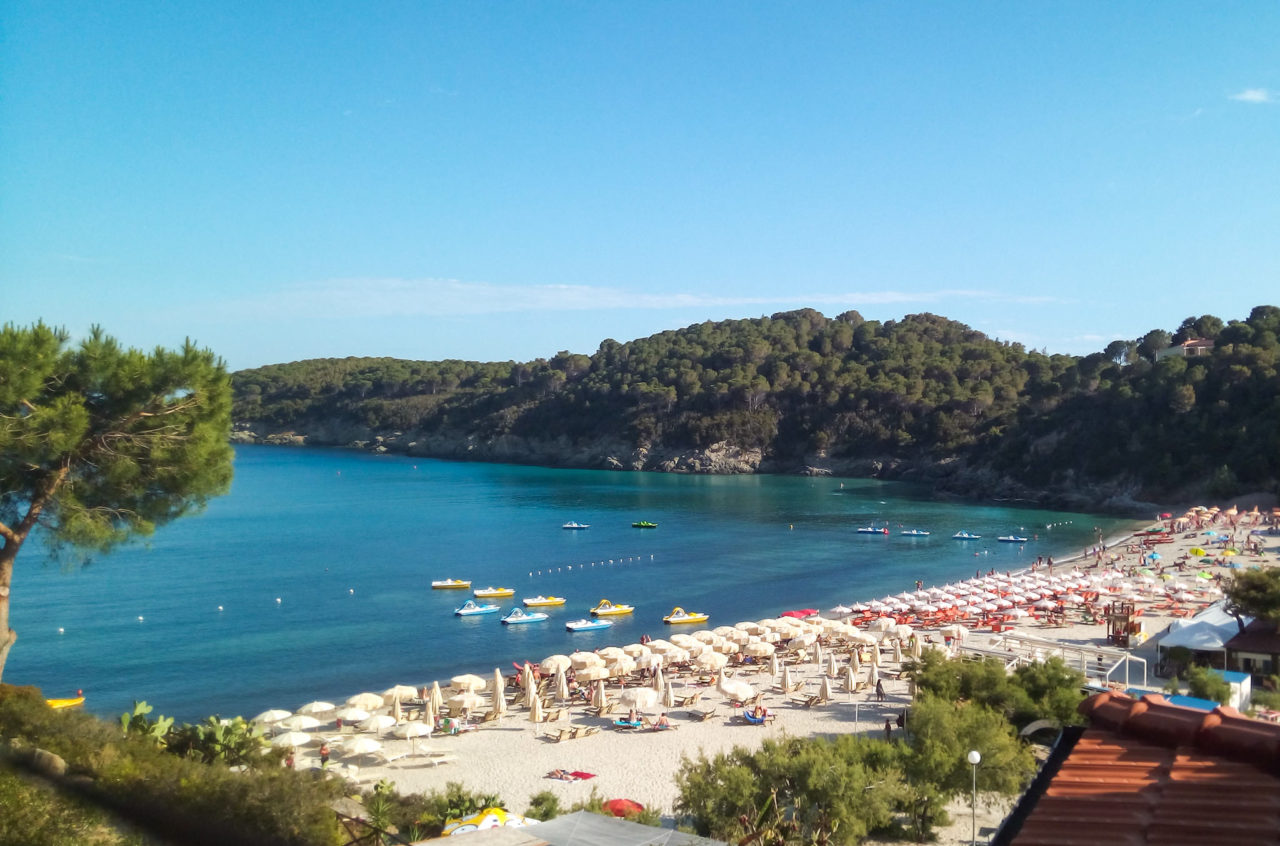 The Tuscan Archipelago National Marine Park includes seven islands. One of them is Elba, the place of exile of Napoleon. It is the most beautiful island of the archipelago. The beach of Fetovaia (Spiaggia di Fetovaia), located on its shore, is considered one of the best in Italy.

The landscape is amazing: white sand, turquoise water, blue sky, green hills, surrounding the bay. On Fetovaia it is quiet, there are few people, there are almost no waves in the secluded bay. The beach lies on a sandy strip about 200 meters wide.

6. Marina del Isola, a beach in the resort of Tropea 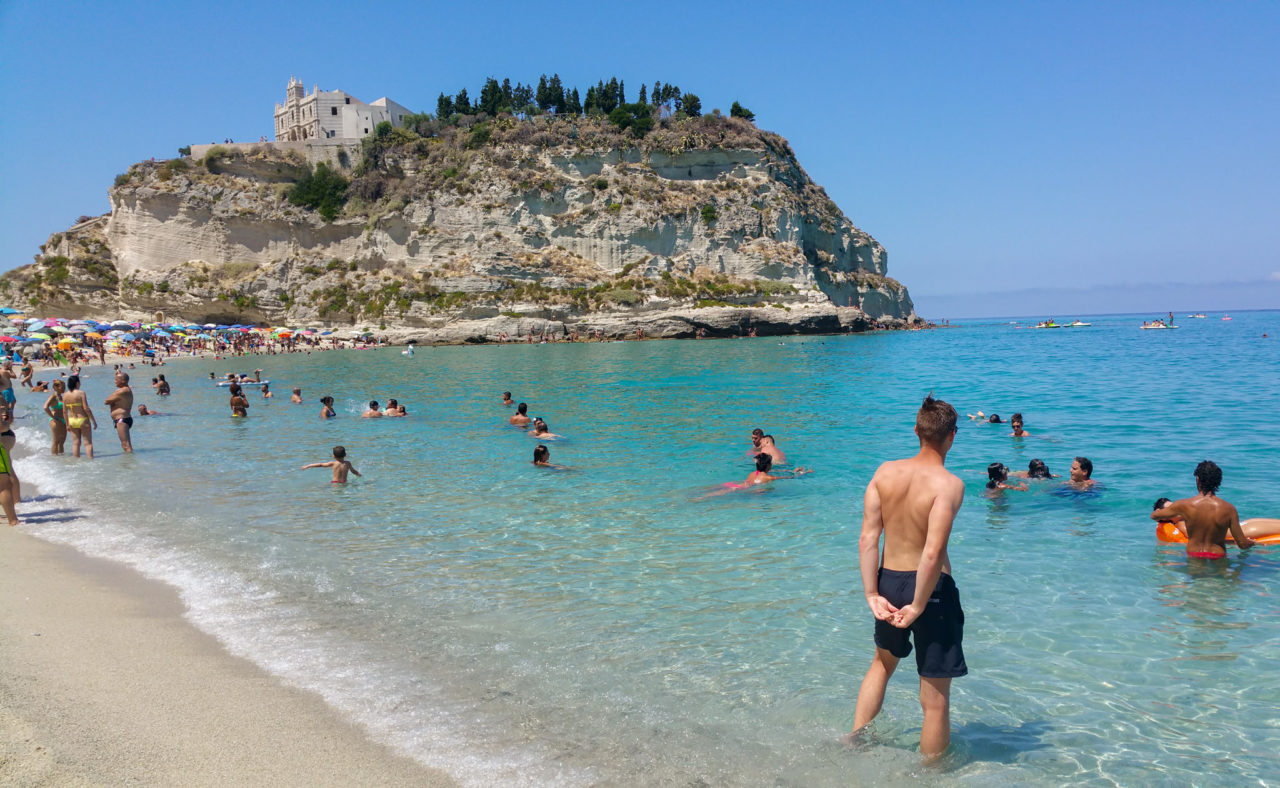 Tropea is the jewel of the Tyrrhenian coast of Calabria. Here, at the tip of the Apennine peninsula, is the beach of Marina dell’Isola Spiaggia. It’s always crowded but easy to get to without taking the ferry and sailing to the secluded islands.

It’s worth renting a car and drive to the beach line, even if you’re just traveling in Italy. It is amazingly beautiful here – against the background of the blue sea, on the rock of Isola Bella rises the ancient temple of Santa Maria dell’Isola. 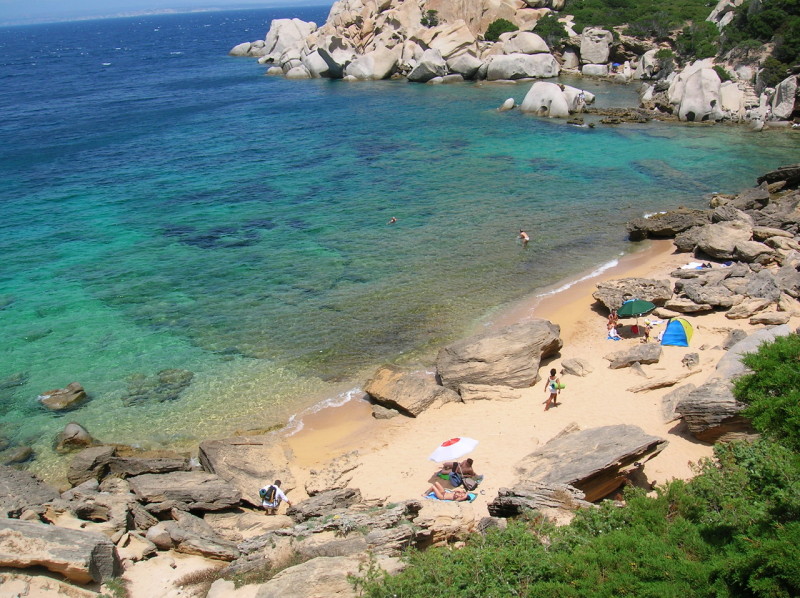 There are not many tourists in the north of Sardinia. Cala Spinosa is mostly a weekend getaway for Italians. The beach of Cala Spinosa – a very narrow strip of sand, but the sea is surprisingly clear. It is better to come here on weekdays – to sunbathe on the secluded beach, to admire the magnificent scenery, to dive in the crystal clear water.

8. Rock dei Turki on the coast of Sicily 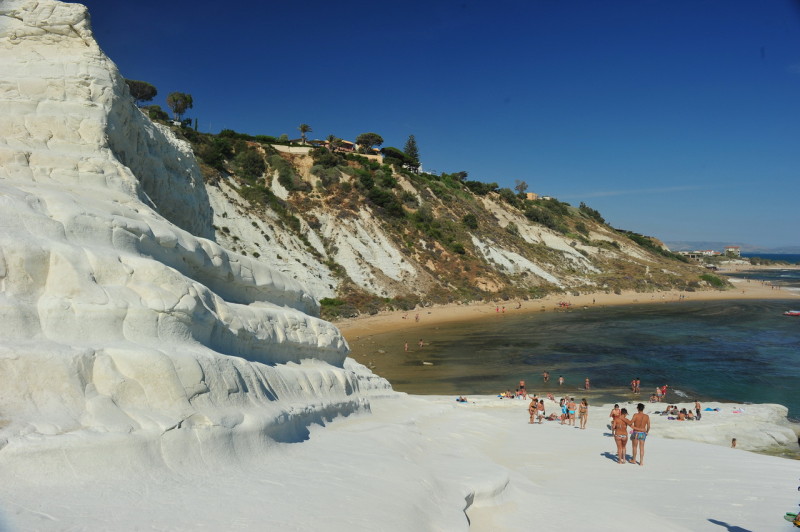 The “Turkish Steps” (Spiaggia di Scala dei Turchi – Scala dei Turchi) is a monumental white cliff, which over the years, under the action of the winds has acquired the bizarre outlines of the steps descending to the water. The name of the place has been attributed to its resemblance to the famous Pamukkale baths; another version is that the Saracens landed on the Italian shore using these steps.

The beach is located on the outskirts of the town of Realmonte, not far from Agrigento. The unique natural site has been nominated for inclusion on the UNESCO World Heritage List. The width of the sand strip on the coast is small and at high tide the beach completely disappears under water.

9. Chiaia di Luna – a beach on the island of Ponza 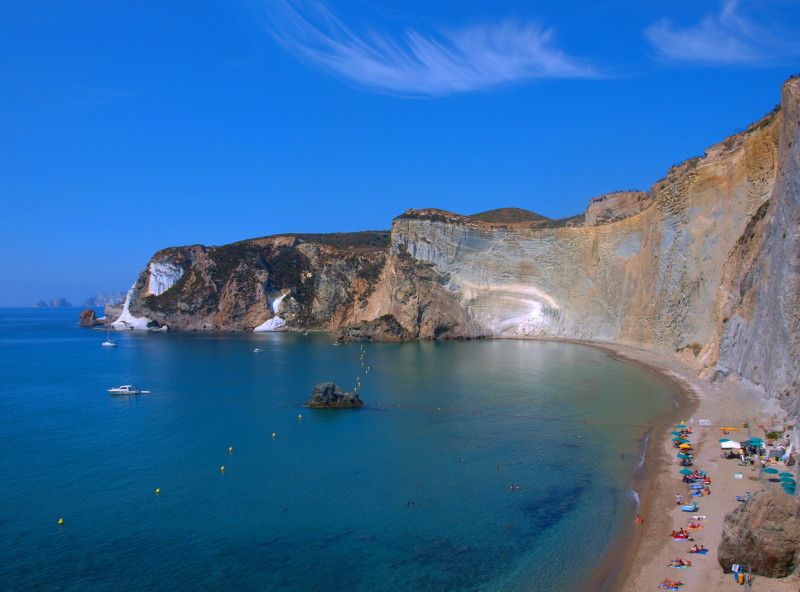 There are always a lot of beachgoers on Chiaia di Luna, a paradise located on the island of Ponza in the Lazio region, not far from Rome. Although the beach, surrounded by high cliffs, can only be reached by ferry, people do not stop it. It is better to come here in spring or in September – less visitors than in high season and the scenery is always beautiful.

10. Baia delle Zagare – A beach on the Gulf of Zagare 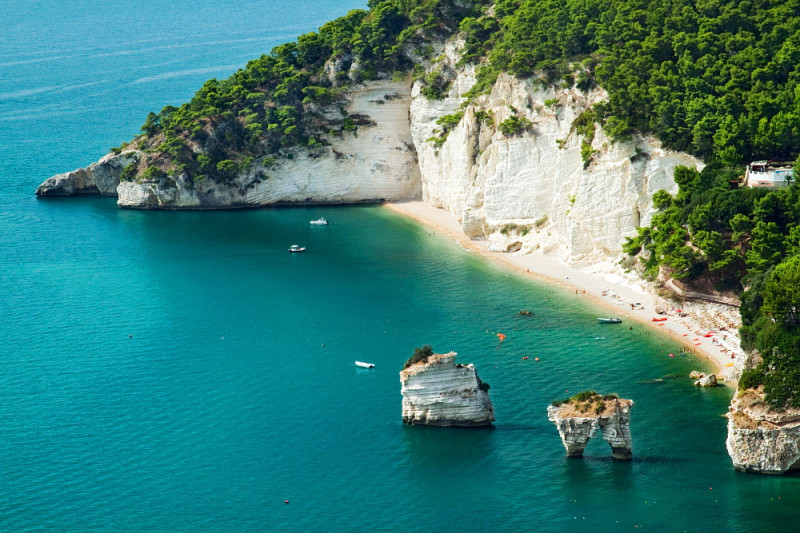 The beach of Baia delle Zagare is located in the national nature reserve of Monte Gargano in Puglia. The tourists are attracted here not only by the idyllic vacation on the coast, but also by the wonderful possibility to visit the most interesting places: the ancient mountain forests and natural oak groves Foresta Umbra; the ancient pilgrimage sanctuary – the temple of Archangel Michael on Monte Gargano. From Dzagare there is a ferry to Montenegro – after eight hours you can be on the opposite shore of the Adriatic.

How do I save money on hotels?

It’s very simple – look not only on bookings. I prefer the search engine RoomGuru. It searches for discounts simultaneously on Booking and 70 other booking sites.

The 10 most amazing beaches in Italy

In late spring, the fine white sand of Isola dei Coniglia, on Lampedusa’s southeastern coast, is overrun by endangered sea turtles as these amusing animals await their young. At other times of the year, this spectacular beach, washed by crystal-clear water, is a popular spot for tourists and divers. Isola dei Coniglia, part of a Legambiente protected nature reserve, shows visitors the piercing beauty of the local coast and seabed. To enjoy the tranquil beauty and uniqueness of this beach, it’s best to come here early in the morning – at other hours the beach is crowded with bathers, although nothing can spoil this paradise. 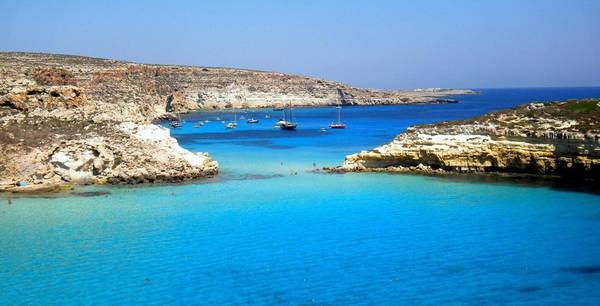 This strip of golden sand stretches for three kilometers and is washed by the clearest blue sea, a few steps away from the pristine coves of Zingaro, in the province of Trapani. San Vito Lo Capo beach was voted most beautiful in Italy in this year’s beaches ranking: the choice of many travelers has fallen on this sandy Sicilian oasis, demonstrating the natural beauty of this part of the coast, where the mountains merge with the sea and the transparency of the water makes the bathing unforgettable. 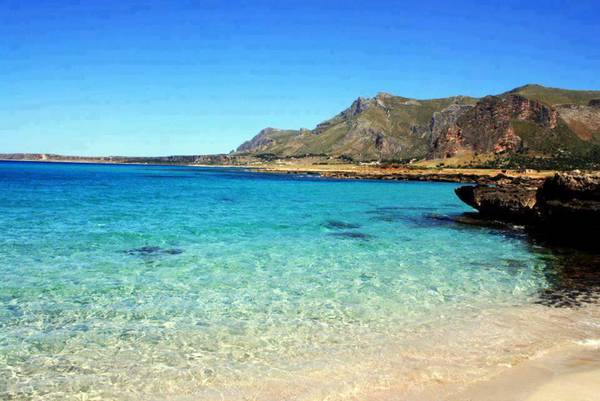 This wild beach is located on the southern coast of the island of Favignana, which belongs to the nature reserve of the Aegadian Islands. According to some legends, the name of the beach comes from the color of the blood shed by the Carthaginians who were defeated by the Romans during the First Punic War; in fact, the rocky coastline is covered with Mediterranean vegetation dominated by reddish hues, in stark contrast to the many shades of blue water. 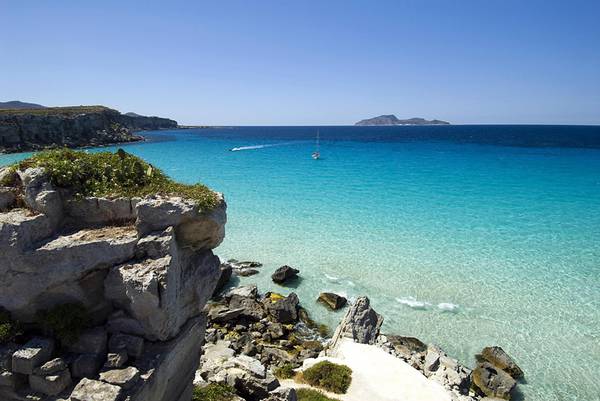 The fine white sand of Stintino, washed by turquoise waters, surrounded by dense Mediterranean vegetation: La Pelosa beach offers an unforgettable experience with a salty aftertaste and the scent of juniper. The beach, which can only be compared to the beaches of the Caribbean islands, is located in the Gulf of Asinara, on the north-eastern tip of Cape Falcone; La Pelosa has only one drawback: it is too popular with tourists, who arrive here in droves from the earliest hours of the morning. 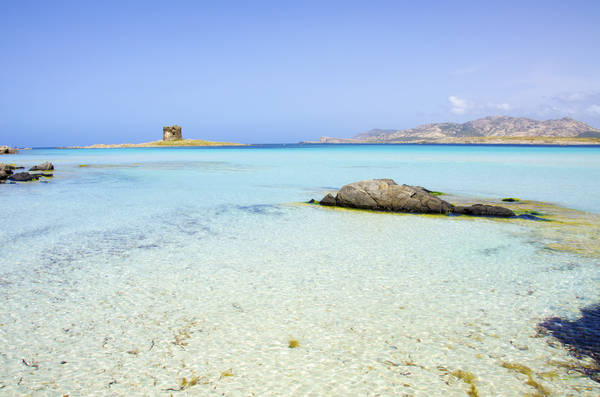 This beach is so beautiful and pristine that in 1995 UNESCO declared Cala Goloritza a natural monument because of its uniqueness and splendor. The beach is located south of the Gulf of Orosea, near Oliastra, it is small, but the ivory sand and the contrast with the crystal clear water makes it even more unforgettable. It is easier to get here by boat, otherwise you have to walk a very long steep path. In any case, the beauty of the beach, located between the cliffs and cliffs, is worth the effort. 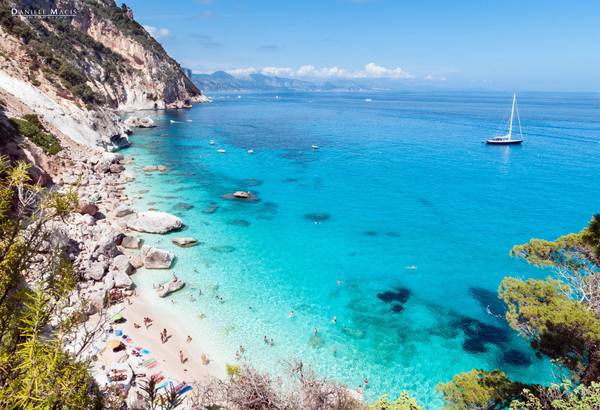 Junco Beach is also known as the beach of two seas because this strip of sand separates the Mediterranean Sea from Notteri Pond, where you can watch pink flamingos in winter. This magical place is located next to Villasimius, the beach is characterized by soft sand, almost like talc, of an amazing pink color, contrasting with the shine and transparency of the sea. 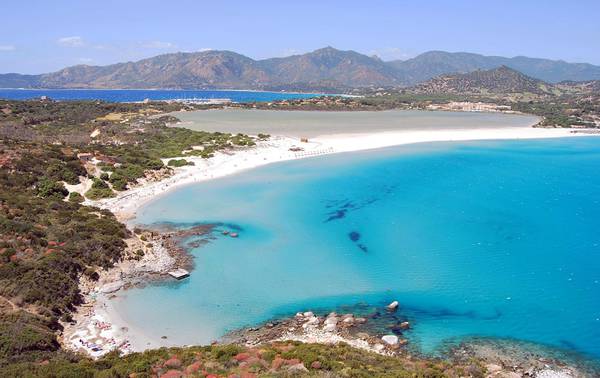 The morning in the province of Foggia on the Gargano coast offers a particularly spectacular panoramic view of the bay and its beach, a strip of soft sand by the emerald-colored transparent waters about a kilometer long, located between high limestone cliffs and coves dotted with caves. It can be reached by sea or, after entering the elegant hotel of the same name, by elevator.

Located on the picturesque Costa dei Capo Vaticano on Calabria’s Tyrrhenian coast, the picturesque Grotticelle beach consists of three small beaches characterized by fine sand and clear coastal waters. These beaches are chosen by snorkelers, they are fully equipped, free and easily accessible by car. 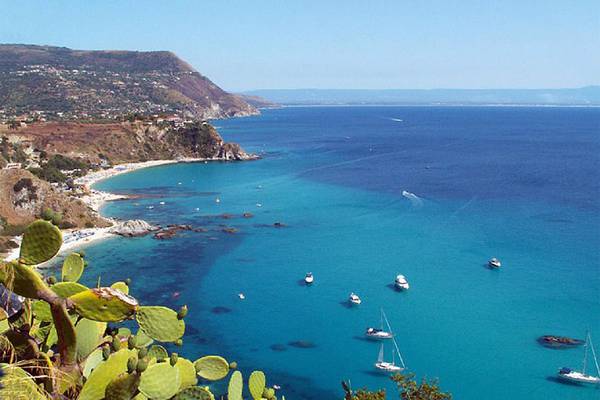 Near Marina di Camerota, in the province of Salerno, the coast offers the visitor a mind-blowing show: here small hills are dotted with olive trees that remember the warlike Saracens, and high cliffs topped with towers descend to clear waters that entice swimming and snorkeling. To enjoy the beauty of Cala Monte di Luna we recommend a boat trip along the coast with fishermen who know the local legends and will tell you about each cave or crevice between the rocks. 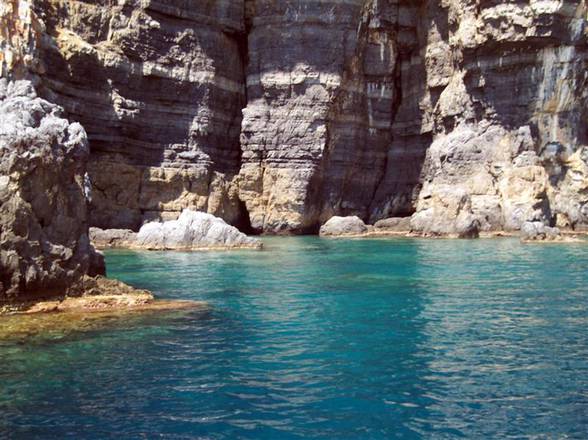 On the east side of Giglio Island is Lido Arenella, one of the few easily accessible parts of the coast. Opposite is the beautiful cape of Argentario. The beach is fully equipped and, among other things, visitors to the lido have the opportunity to go from here to tour the island of the Tuscan archipelago aboard a comfortable water cab.